June 15, 2022
Japadabavi is a merger of two words- Japa + Bavi. Japa means chanting of god's name and Bavi means well. This well is unique, so is its name. This well gets its name because it has been designed in such a way that a person can take bath in the well and perform  rituals within the walls of the well.
As per Hindu traditions, a person has to be clean and pure physically before sitting for pooje or japa or dhyana. So after bathing, the person should head straight to the poojasthala (place of worship) without coming in contact with anyone or anything. This reminds of a little story one of my uncles had shared. During his childhood days, his father would wait at the bathroom door, as soon as my uncle finished his bath, stepped out with a towel around his waist, he would be herded to the pooja room where he applied Vibhuti to forehead, neck and arms, then chant a sloka or two and then free to go. The process was to ensure that pooje is performed in the freshest condition. This practice goes back to ancient times where people would take bath and then sit for pooje or japa dripping wet. Japada Bavi was one such well designed for a person to bathe and immediately commence rituals.
This is the stepped well of Dambal which was discovered relatively recently, my guess is within the past twenty years or so. Going by the well's architecture and construction, it seems very much a Chalukyan creation, sometime in X to XII Centuries CE. This well could be built around the same time as Doddabasappa Devastana. The well is situated about 280m southwest of Doddabasappa. 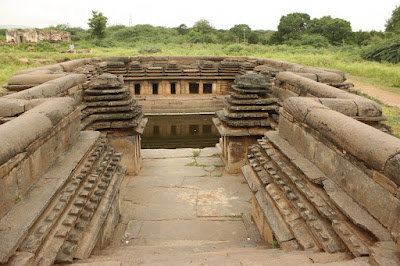 The well's entrance is on the eastern side. It is about 22m long and 10 meters wide. However in the lengthwise direction, the well tapers towards the entrance. In plan the well looks like a linga pedestal. 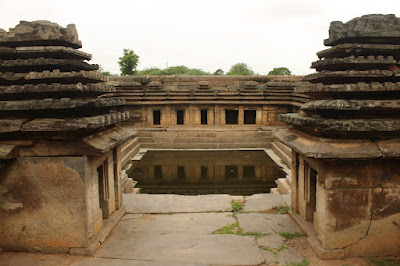 The number of shrines within this enclosure is 21, I think. Builders usually stick to odd numbers, even in measurements, for example 21 feet in length or the number of tiers in a Shikhara would be 7 or 9 or 11. 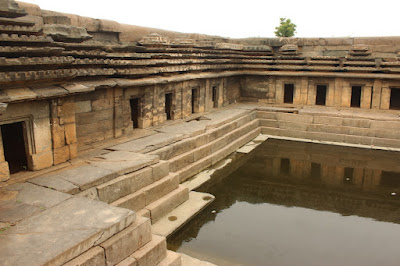 View of the well from the western side. The little shrines are scaled down temples, the proportions are more or less same. 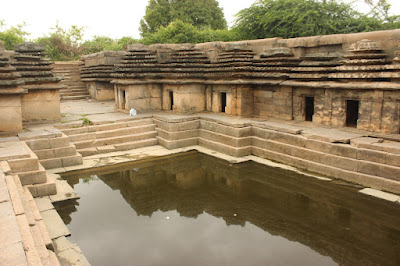 The number of steps here, in the foreground would also be in odd numbers. 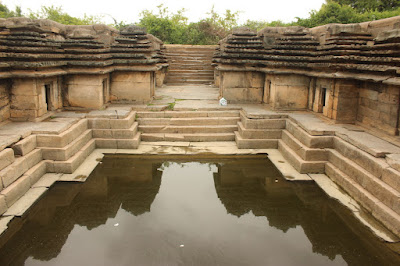 Of all the pictures in this post, this one is my favorite picture. The crown of one of the shrines gives a special feeling to this picture. The crown design & finish reminds me of an automobile part ...a die cast and precision machined component. Looking at the complete picture, the lines created by the steps and Shikharas is remarkable. 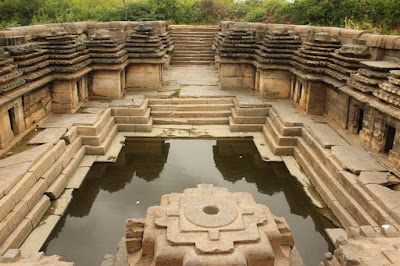 I think a spike made of an alloy fitted into the hole a the center. If my imagination is a fact then every Shikhara would be having a glittering spike at the top. The metallic spike would have a reason, something to do with cosmic energy. 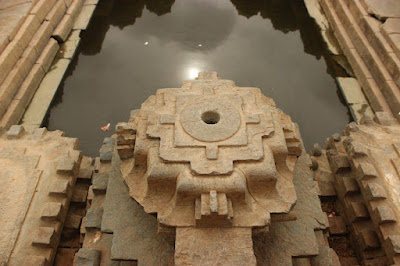 The enclosing wall is five tiered and stepped. The wall design is fascinating too, the effect of flowing lines. 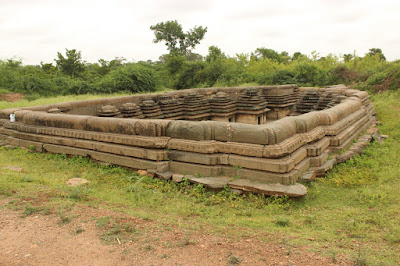 The bends in the wall are brilliant designs. Functionally they have proved their mettle by surviving centuries and aesthetically they are marvelous. Every tier's bends are clever designs. Makes me wonder what purpose these designs had. They are not just for aesthetics, there's some functional value to it. 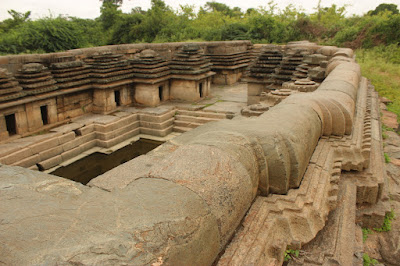 Another view of the enclosure wall. 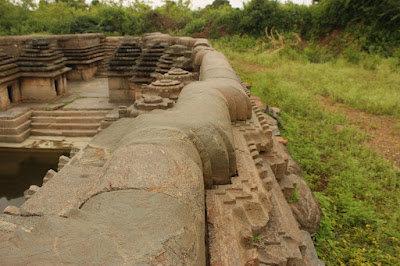 Normally in ancient sculptures ones gets to see uniform surfaces which means the stones are free from internal deformities or variations. Here a few of the blocks have a unique texture caused due to internal deformities. A highly experienced sculptor has shaped this stone as though the deformities didn't matter in the least. The final output is displays the same precision as seen in normal textured blocks here. 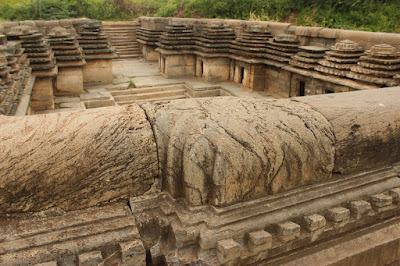 I heard from locals that ASI would be taking this well under its care which means it would become another protected monument. Hope that happens soon.
Done with Japada Bavi, I head towards this little temple just a stone's throw away. The temple's doorway is a sign that this is another Chalukyan creation. The walls are recent, made of stones and mud. This temple is called as Siddeshwara Gudi, if I remember it correctly. 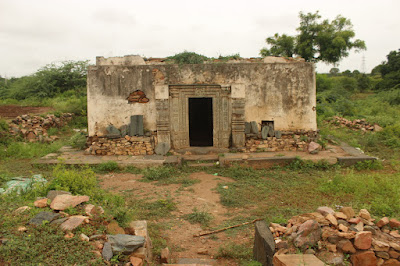 A closer look at the five-tiered door frame. Gajalakshmi adorns the horizontal portion. 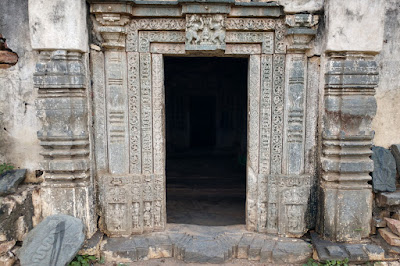 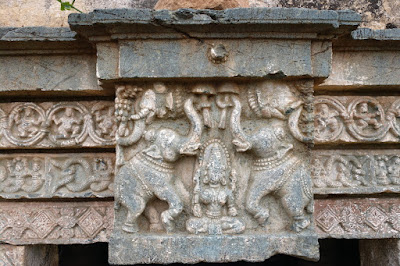 I took a look at the inside without actually entering the temple. Seeing the interior was a pleasant surprised.. a Rangamantapa, a doorframe with meshwork screens the Antharala (vestibule) and another entrance on the southern side. Normally temple doors are placed on the northern as well but here we have just two entrances. 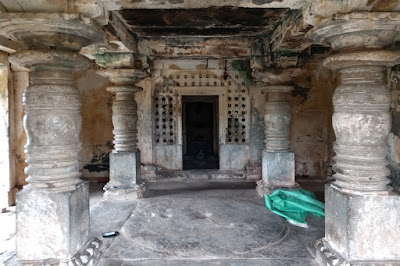 A diagonal view of the temple. At some point of time, the original structure was damaged, probably many of its pillars and beams were damaged badly. So while restoring the temple, masonry walls was the only option. Thank to the team for their efforts to protect this Chalukyan creation. 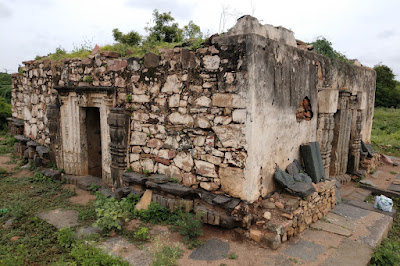 A closer look at the southern door-frame. 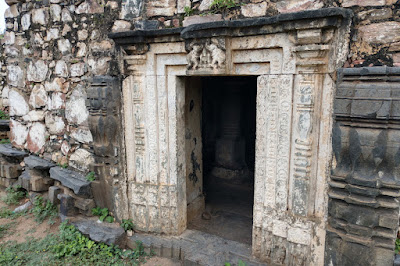 From here I head back towards my car which was parked on the dirt track going along Dambal fort's moat. I had noticed a local person who was hanging for some time there, I inquired if any other ancient temple was present in the vicinity, besides Someshwara and Doddabasappa. Yes, there's another one inside the farmlands, a short distance away. I asked him if he could take me there. The person obliged and I followed my guide...
...the short trek to the temple was rather adventurous. First we had to cross a stream which flowed over a wall of a canal. The wall was slippery, it took me two minutes to wade through 30 feet. Then the narrow path winded through gauva plantatons, open farm lands and finally hopped across a bush to reach the temple. Here it is. 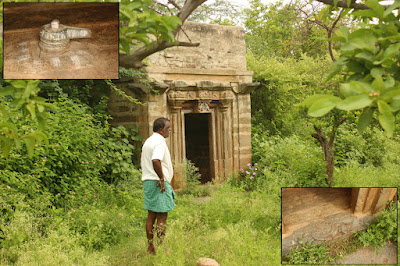 Like Siddeshwara Gudi, even this temple's antiquity originates from the door-frame. This shrine is a simple four-walled structure with a Shivalinga as the only deity. Thankfully villagers have taken care of this shrine and seems to be performing pooje once a week or fortnight.
I was kind of uncomfortable here because of lack of flowing air. I prompted my friend to start the return trek. Back at the stream, we go towards the flight of steps going up the tank bund ...to check out Dambal fort ruins and Victoria Lake.
.........
Posted by siddeshwar at 12:29 AM No comments:

April 30, 2011
The main items on the agenda of the day were two forts- Srimantgad fort and Savanur fort, I stopped at Dambal since we were passing through the village. It was early morning when we reached Dambal, probably around 7 AM. Dambal is known for its two Chalukyan temples namely Someshwara Devastana and Dodda Basappa Devastana, they are situated almost opposite to each other, across the road. Besides these two temples, there are few other monuments-  1. a stepped well of Chalukyan times, local people call Japada Bavi, 2. ruins of a fort, 3. Ganesha Gudi, 4. Tontadarya Siddalingeshwar Math and several nameless monuments. Going by the number of monuments here, it looks like Dambal was a very important center during its heydays.
During my stop at Dambal I happened to see most of the places but I did not take proper pictures of any of these beautiful monuments. For some reason, I shot just a handful pictures. Here are few pictures shot at Dodda Basappa Devastana. The temple is an amazing structure, in fact this one of the few complete temples in good condition. When I say complete I mean its construction is complete including its Shikhara. The Shikhara is a handsome structure towering over the walls of the Garbhagudi. However, I could not get a proper picture of the temple itself because I was shooting directly into sunrays. Anyway, let's talk about the pictures.
Besides the temple Shikhara, Nandi is also a star attraction here. The lifesize Nandi is almost life like. Look at the stone's texture, the uneven shading makes the skin look so realistic. Nandi is placed directly opposite the temple's main entrance... facing the Shivalingu inside the Garbhagudi. 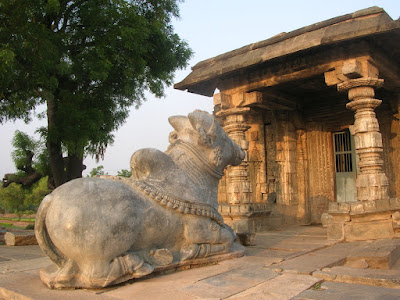 Usually Nandi idols depict calves or young bulls. This one seems like a young bull, a very muscular one. The features are very realistic. Makes me wonder how one could sculpt a statue so realistic. I think the sculptor's hands worked involuntarily to the commands of the brain. The sculptor's mind is in complete control of his physical aspect. 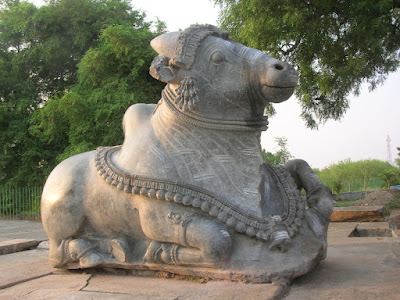 This was shot against sunlight hence the haziness. In northern Karnataka, its a practice to keep Nandi idols covered in cloth since they are open to sky. I guess its a way to prevent unwanted stuff from falling on the idol. 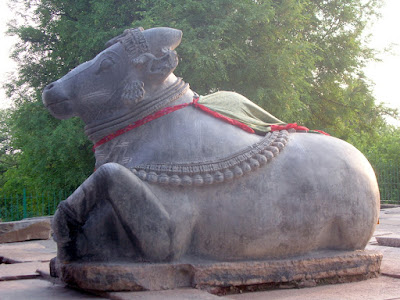 This humanoid idol must be of a warrior queen who ruled over this area. I have no idea who it depicts but the idol is well made. Its a young lady, probably in her youth, a brave one who was adept with a sword. 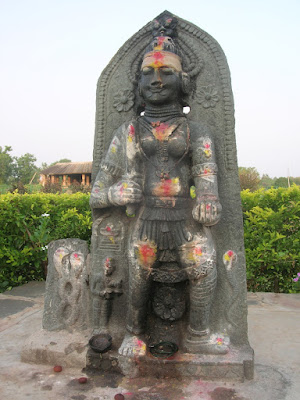 This is the only picture of Dodda Basappa Devastana. As I mentioned earlier, the Shikhara is an amazing creation, in fact its much taller than the temple walls. I think the crown of the Shikhara is missing. There should've been a round ridged sculpture sitting atop the Shikhara. Probably that's the only missing bit. 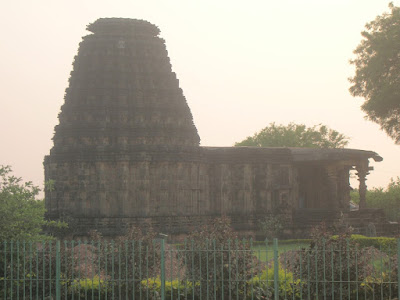