July 3, 2016
This is my fourth visit to Bijapur and my first with Pushpa. Though she'd visited this heritage city once, she'd only seen the icon of Bijapur.. Gol Gummata. I wanted her to see the other magnificent monuments of the city as well. On the list were Ibrahim Rouza, the cannon of Malik-e-Maidan, Upuli Burj, Jod Gumbaz, Asar Mahal, Jamia Masjid, Gagan Mahal and Mehtar Mahal. Also on the list was the Baobab tree planted during Adil Shahi time.

After a light breakfast. we started our tour from Ibrahim Rouza. The day was cloudy and it was drizzling, weather was on our side. Here we are, looking at the domes and minarets sticking out from the three structures of the complex. In the middle is the grand gateway; on the right is the mosque and on left is the tomb. This the tomb of the fifth Adil Shahi ruler Ibrahim 'Adil Shah II who (1580-1627 CE). Superb maintenance isn't it? 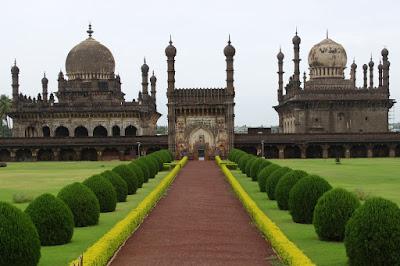 This is the passage in the gateway flanked by platforms. 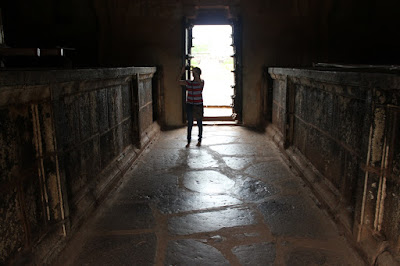 The gateway's other side. The entire complex is walled and well protected. Its a royal tomb, it does need security. 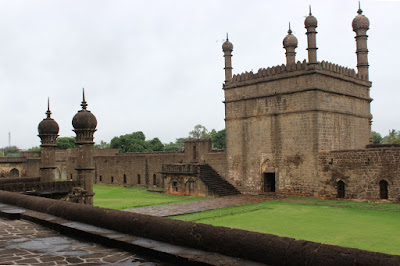 This is the tomb of Ibrahim Adil Shah II, his wife Taj Sultana and their two sons. This tomb and the entire complex is said to be designed and built by the Persian architect Malik Sandal. The years of construction is not available online but I guess it was completed in 1627 CE. Going by the looks it must have built in 8 to 12 years, so the construction must have begun around 1617 CE. 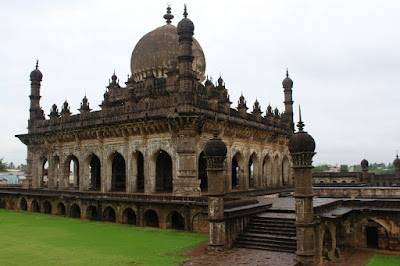 On the right hand side is the mosque with five arches in the elevation. The mosque's and the gateway's minarets are similar i.e. the front two minarets are taller than the rear two. 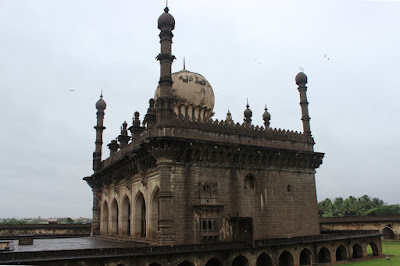 The mosque's interior; the white pillars rising out the floor gracefully to converge into beautiful arches and domes. Between the arches are diamond shaped niches, these niches control the acoustics.. probably to prevent echoing. 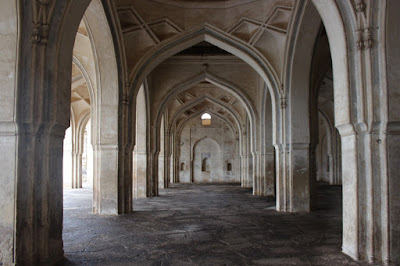 The dome- what seems circular at the first glance is actually a 16-sided polygon encompassing a lotus in full bloom. Such a perfect geometric creation! Each of the 20 domes are decorated like this.. did not observe if all were same or if each of the domes had a unique design. 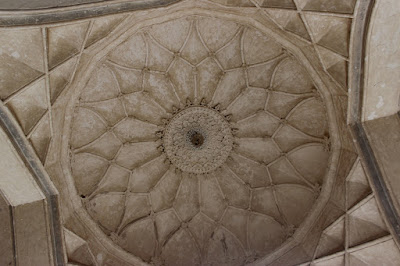 Looking towards the tomb through the arches. Notice how the last arch forms a white border for its arch. Truly amazing architecture. 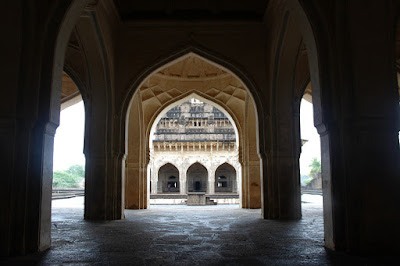 Rauza also known as Ali Rauza is known for its pendant hanging from a stone made completely of stone. Actually there are two such hanging pendants, both on the front side of the mosque. These stone sculptures design is a mix of Hindu temple and Islamic designs. In the top-left side of this picture, you can see a mesh created in stone. Lovely designs indeed. 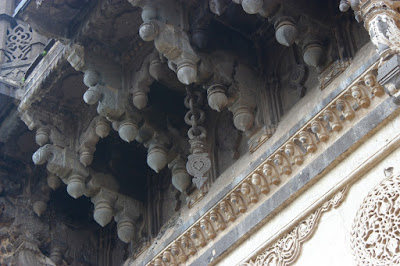 Between the mosque and tomb is an ornamental water tank. On the opposite sides of the tank are pedestals which I guess were used as seats to perform the customary abulation before entering a mosque or tomb. Now lets turn our attention to the tomb. The building looks beautiful in this view.. the central bulbous dome and the corner minarets and the arches below.. well proportioned design. 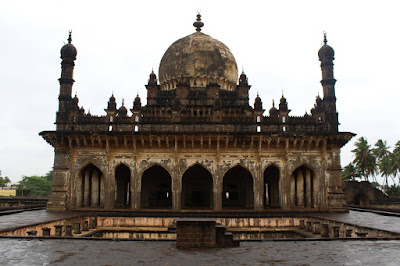 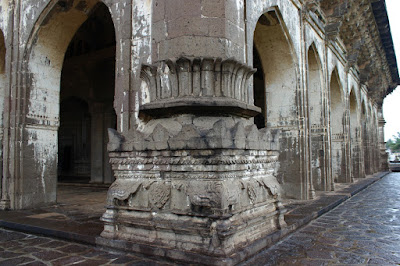 Looking up at the pillar. The pillar and beam design are definitely borrowed from temples. 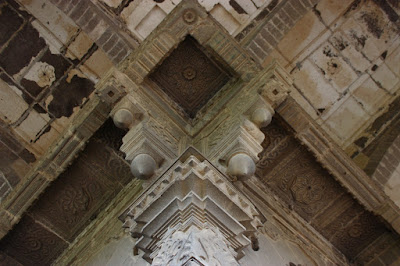 Another look up view.. one of the sculpted arches and the floral designs on the ceiling.. superb. Notice the lotus designs.. you can see them in Chalukyan temples of XII Century. 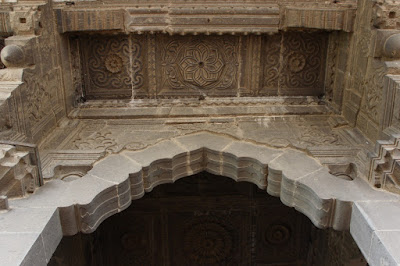 The richly decorated walls of the sanctum. These walls carry intricate drawings and paintings.. mostly floral. Notice the black stone door-frame.. either sides of the frame has a rectangle within which is an elaborate maze. The door frame carries an inscription of verses from the holy book. 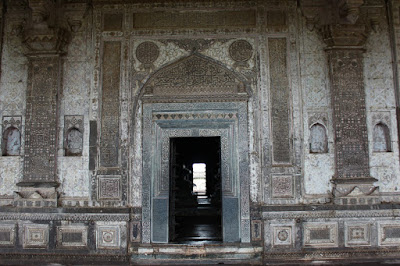 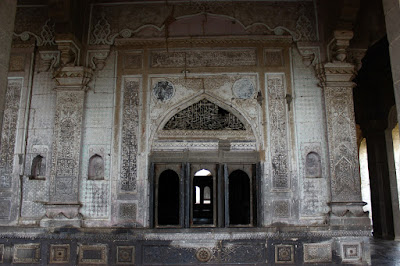 A floral motif on the corner pillar. Floral designs embossed in stone and the complicated maze on the door-frame. During my first visit here (in 1996 I and my friend Gulveer were on a biking trip around Karnataka) our guide had traced the path of the maze with a matchstick.. the path ended at the point where it started. 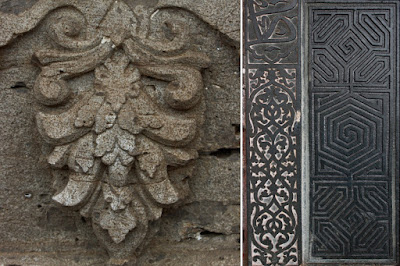 The outer perimeter is an arched aisle. Lets step inside the sanctum.. one of the windows with a mesh. The mesh depicts Quranic verses. 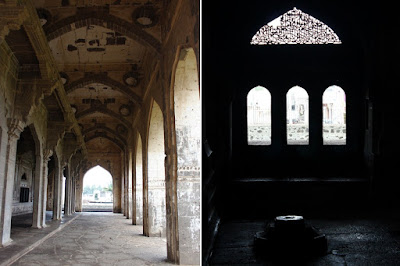 The tomb has 4 doors eight windows. The windows are tastefully decorated with sculpted meshes and has a seat too. The doors are said to be original teak wood doors studded with brass knobs (see inset) and other fittings. The octagonal object on the floor is a lamp holder. You can see a similar one at Gol Gumbaz too. 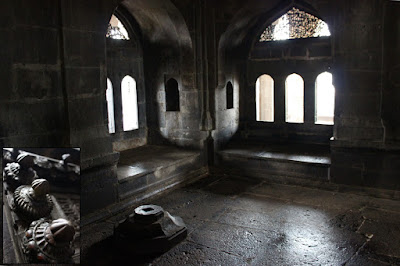 The interior has five tombs - in the middle are Ibrahim II and Taj Sultana's tombs. The remaining tombs are children and grandchildren. Flat tops indicate woman's tomb while the pointed tops are men's tombs. 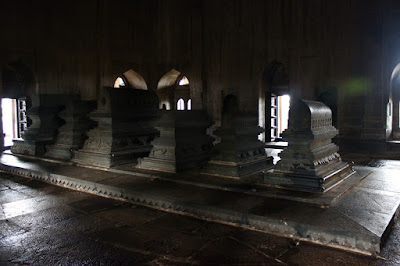 Below these structures is the basement formed by the pillars bases. Its a quite a large area. It is said that the space was used to store ammunition and food grains. I remember the guide telling this was used as barracks. However, during my visit of 2010, the basement and the garden area was flooded with rain. Whatever happened recently might have been a result of altering the ancient water ways. During Adil Shahi rule, Bijapur was a well planned city which did not have shortage of water even in summer months. However in 2010 the city was a mess. In 2016, I could see some improvement.

What to see in Yadgir District?

Yadgir is the second smallest district of Karnataka, it was formed in December 2009. This little district of three Taluqas- Shahapur, Surpur and Yadgir -was originally part of Gulbarga district. This district is known for its vast fertile black soil plains. Crops produced are jowar, cotton and toor. A large portion of Yadgiri district lies between the two big rivers - Krishna and Bhima. During the Muslim rule, this region was known by the word Doab which means 'land between two rivers'. Yadgir district along with its neighbouring districts Gulbarga and Raichur has a rich cultural past, its a very active place since Neolithic times. In the past Yadgir, was known by the name Yadavagiri. Yadgir district capital was the capital of the Yadava kingdom between 1347 to 1425 CE. Yadgiri was part of kingdoms and empires like Satavahans, Chalukya of Badami, Rastrkuta, Aidil Shahis, and lastly Nizam of Hyderabad. During the time of Nizam, Surpur was ruled by the Nayakas assisted by the British political agent Philip Meadows Taylor. Besides administration of Surpur, Meadows carried out development of roads and lakes. He also visited and documented the prehistoric sites of this region like Bhimarayana Gudi, Rajan Kollur, Budhihal and Hagaratagi. During Taylor's stay at Surpur, he designed and built a house on a hill overlooking Surpur town which is a historical monument today.

Well, here's a list of places of historical importance-


You may also want to learn about other districts of Karnataka-

From a small age Basaveshwara was close to his sister Nagamma and she was a great influence over him. Also, Basaveshwara was an enlightened soul, from a young age he showed kindness to animals and the helpless. As he grew up he could not bear to see the pains and difficulties of the poor and downtrodden. He was sent to Kudala Sangama for education, where he spent many years and remained bonded to the place. Basaveshwara served as a minister in King Bijjala's court at Kalyana in present day's Bidar district. He initiated a social revolution to fight the injustice meted out the so called upper caste people to the lower caste people in a non-violent way. Basaveshwara preached and practiced a way of life which can be described in two Kannada words 'Kayakave Kailasa' - this short saying roughly translates to 'Work is Worship' but has a deeper meaning. He said that one perform their duties in a selfless manner i.e. work with dedication and accept the outcome as it is, be it favorable or unfavorable. He was equally dedicated to his official duty as a minister and personal endeavor to bring in social equality. His family members supported him completely and played an active role in the revolution. As a part of their practice Shivasharanas composed Vachanas - short poems in simple language carrying a moral. The movement showed positive changes and gained popularity.

Every good change has to face opposition, so was the case at Kalyana. Some prominent characters of the upper caste stirred up trouble by falsely accusing Basaveshwara of misusing state funds for personal use. Basaveshwara disproved the allegations and regained the king's confidence. But the seeds of doubt were sown. The last straw was to accuse Basaveshwara of conspiring to usurp the throne to which his reaction was resigning from the minister-ship. After formally bidding bye to the king, he left Kalyana and moved to Kudala Sangama. At Kalyana the situation changed drastically, King Bijjala is assasinated and Shivasharanas are blamed and harassed. Many Shivasharanas leave Kalyana and move southwards carrying their Vachana collection. Shivasharanas were peaceful but were trained in martial arts to defend themselves. The harassment did not stop, Bijjala's army went after the fleeing Shivasharanas and battles ensued. The main battle was near Kadrolli on the banks of river Malaprabha (present day Belgaum district) was won by Shivasharanas. Having lost, the king's soldiers give up and return to Kalyana.

Shivasharanas continue their journey southward, some succumb to their injuries on the way. Gangambike attains Aikya on the banks of river Malaprabha. It is said that a group led by Akka Nagamma and her son Channabasaveshwara to Dharwad and stay at Ulavi Basaveshwara Gudi for few days. Then Channabasaveshwara goes to Ulavi, deep in the jungles of Western Ghats. Akka Nagamma continues to travel south and her journey ends near present day Tarikeri. The place where she attains is called Yenne Hole meaning stream of oil. While all these happen, Basaveshwara has attained Aikya at Kudala Sangama. Not much is known about how Neelambike reaches her resting spot on the left bank of river Krishna near Tangadgi. All this happened 800 years back and their services are still remembered, their Vachanas still popular. Long live their names.

During early 80s, 90s and 2000s Karnataka government took steps to conserve the Aikyasthala of Basaveshwara, Gangambike and Neelambike. However, nothing had been done at Akka Nagamma's Aikyasthala until March-2014. So, here are the four spots.. 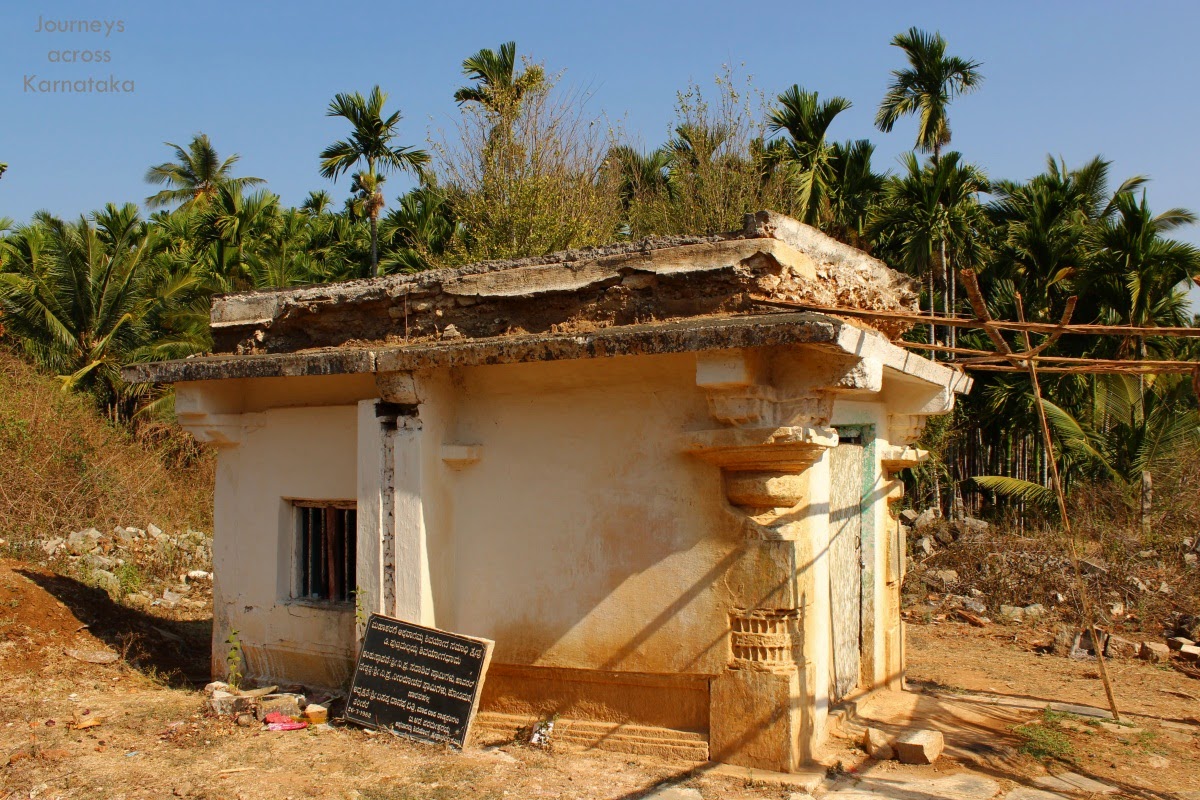 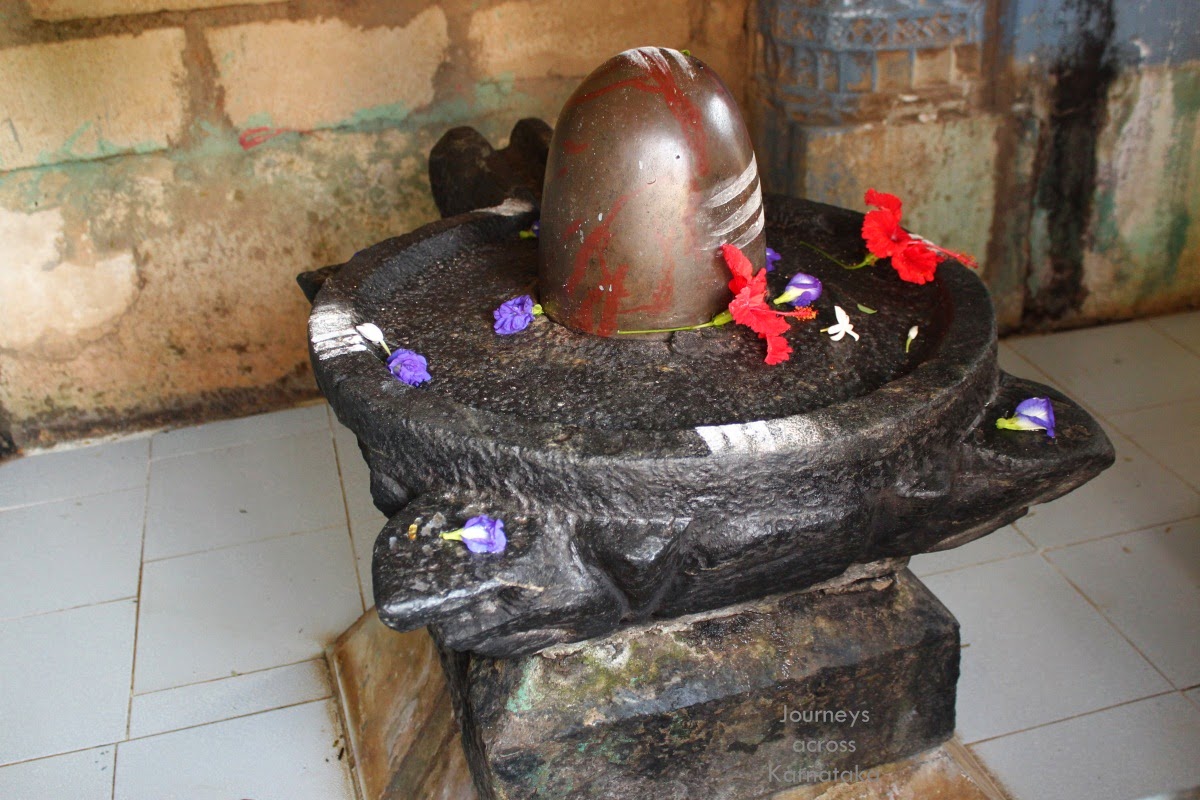 Basaveshwara's Aikyasthala at Kudala Sangama - the confluence of rivers Malaprabha and Krishna, Bagalkot District. These are the waters of Basava Sagar, the reservoir of Narayanpur dam across river Krihna. 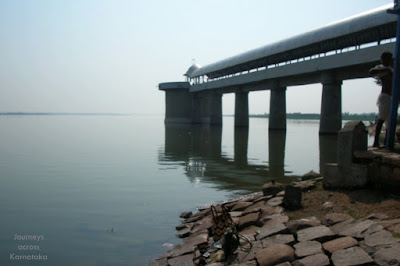 Gangambike's Aikyasthala in river Malaprabha, Belgaum district. This spot is off the national highway, about 43 kms from Dharwad & 35 kms from Belgaum. 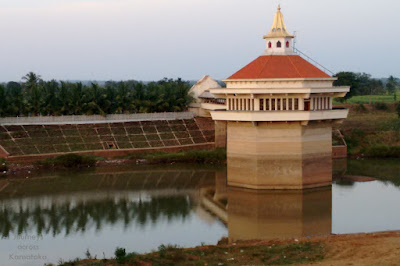 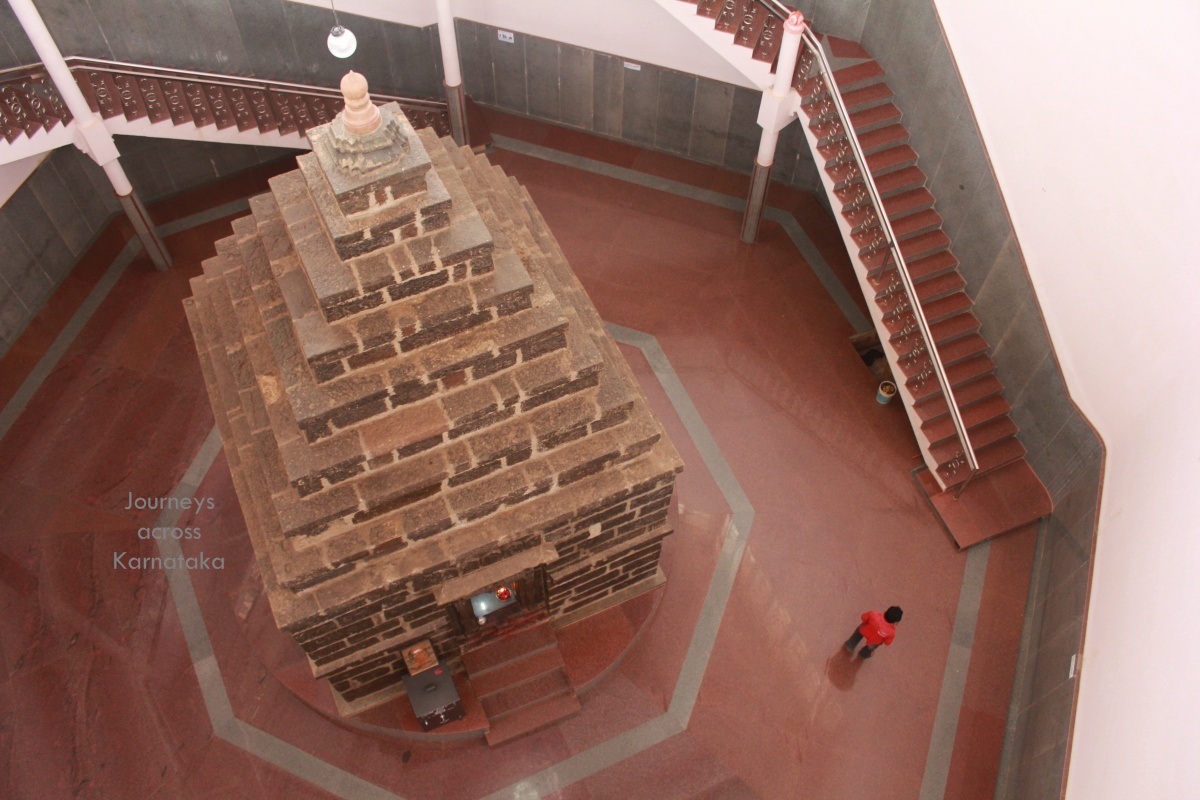 Neelambike Aikyasthala on the left bank of river Krishna, in the waters of Basava Sagar, about 2 kms from Tangadgi village in Bijapur district. This spot is about 4 kms from Kudala Sangama on the right bank. 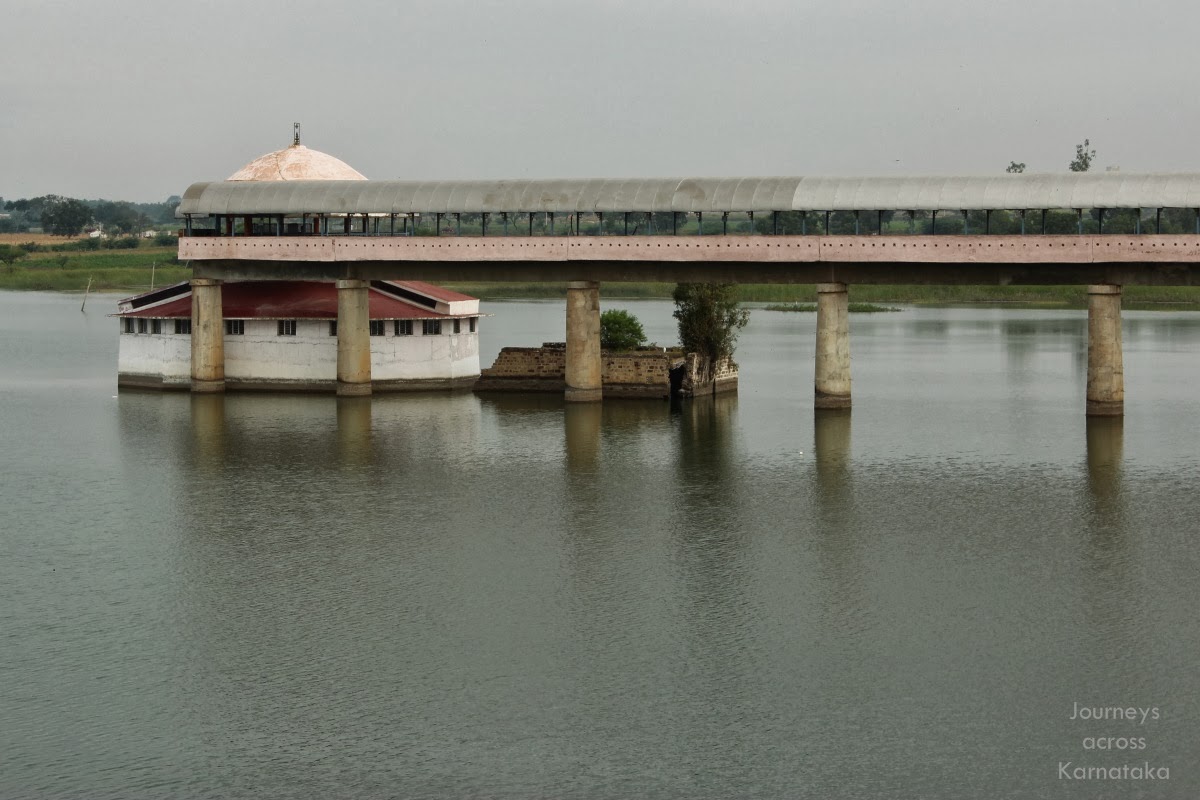 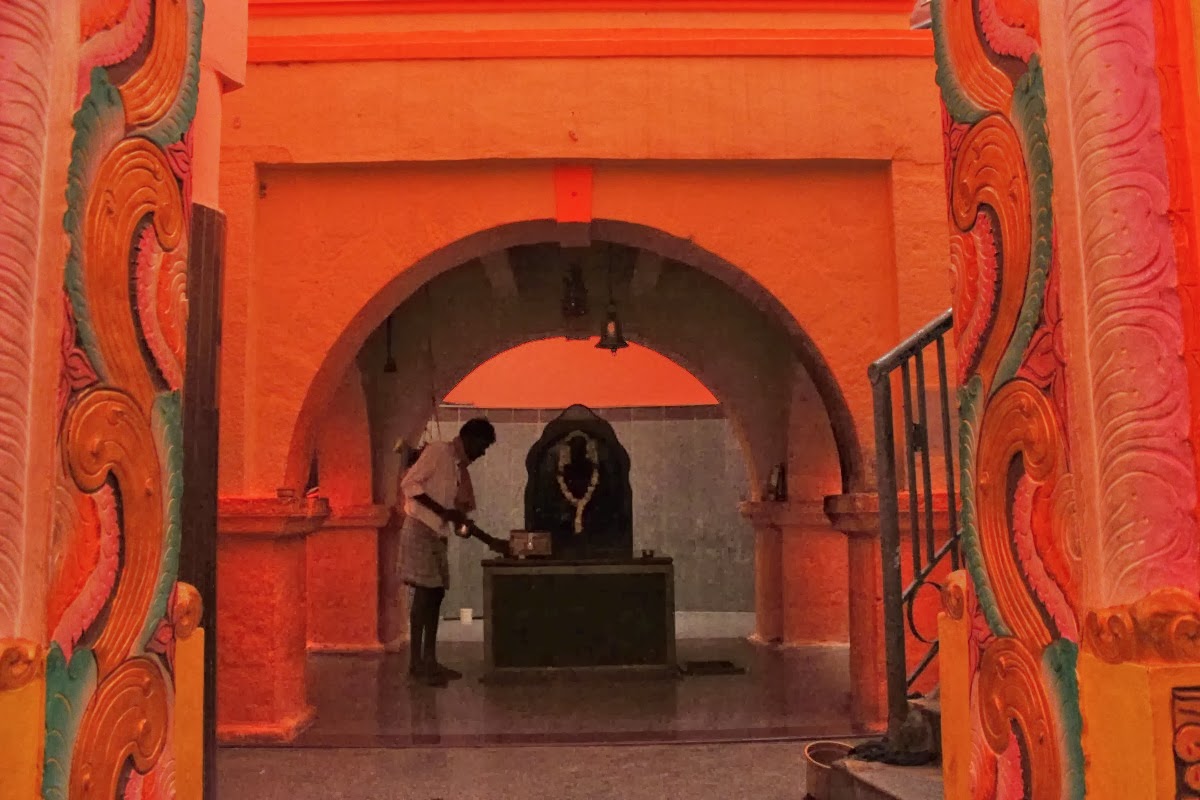 Also, here's a link to two other related spots-
Dohara Kakkayya Aikyasthala near Kakkeri, Belgaum district.
Ulavi Basaveshwara Gudi, Dharwad. This is the temple where the Shivasharana group had camped here after the battle of Kadrolli to celebrate their victory.
.........
Posted by siddeshwar at 12:30 AM 3 comments: 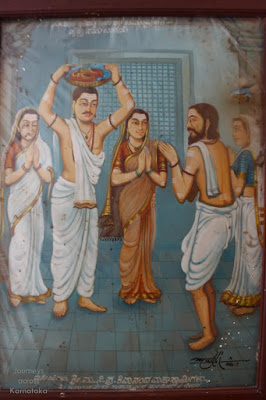 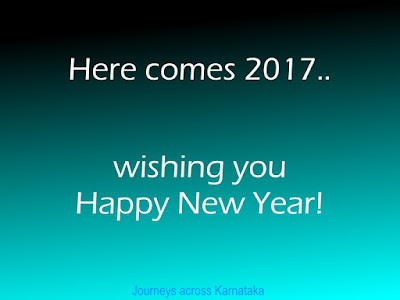