I had spent hours researching Google maps trying to find the exact location of Nittur and Udegolam; found Nittur village but Udegolam was unmarked. Also I wasn't sure if these edicts were within the villages or situated in a remote place like Palki Gundu. Well, I did not want to assume anything.. let me go there.

March 8, 2013
We had left Bellary early; our first stop was Tekkalakote, next was Varavina Malleshwara temple 4 kms east of Tekkalakote. We came back to Tekkalakote, got directions for Nittur. The road was flanked all boulder strewn hills; the very look of those  hills gave a feel of prehistoric human settlements; in fact we could see a couple of rock-shelters on the slopes, perfectly suitable for humans to live in. I was tempted to stop and explore but the thought of upsetting the itinerary was not a good idea. After couple  of kilometers the tar road gave way to a narrow mud road. At a brick factory the path turned right and left; we entered the paddy belt. It was a carpet of green as far as we could see; we could see rock-formations too. Instead of heading to Nittur straight away we stopped at the first person we met to ask for directions. This person guessed our purpose, he suggested us to see Udegola first, which we were closer to and gave rough directions to Nittur site. Thanks to the man; I was relieved now :-)

A narrow path led to a rock formation; we could see a short flight of steps leading to a small rock shelter protected by brick-wall, grills and doors. I went in and peeped, it was a temple. I scanned the surroundings; behind a clump of Neem trees was a granite structure- close to the left edge in this picture. 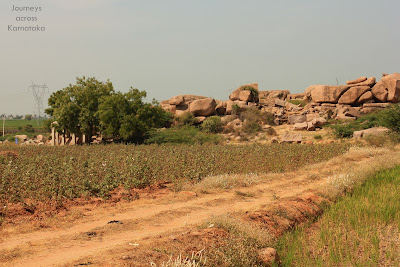 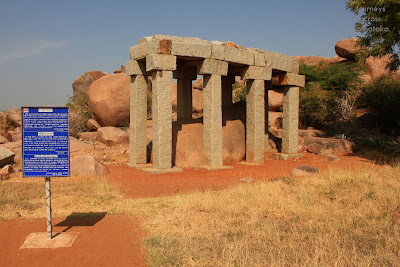 Two women and a little boy were sitting close by, they told us the care-taker was on sick leave :-(
I offered to take pictures of them but they were too shy, even the kid did not want his picture taken.
The edict was inscribed on the entire surface facing us. However, some parts of the inscription was barely visible. I guess trained epigraphists' eyes can catch text better than any layman's eyes. 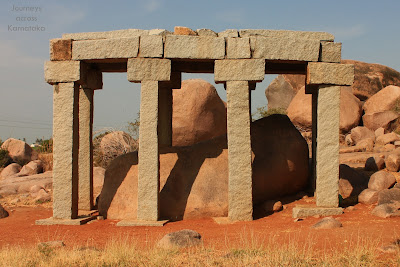 A closer look- click on the image to enlarge it - that way you'll see the letters. 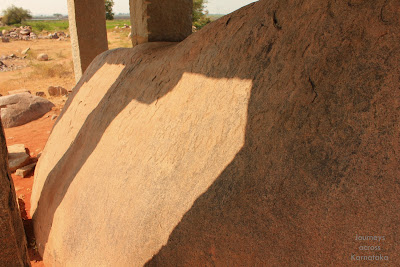 I guess exposure to nature's forces the surface chips of in layers. I hope this shelter helps preserve it better. 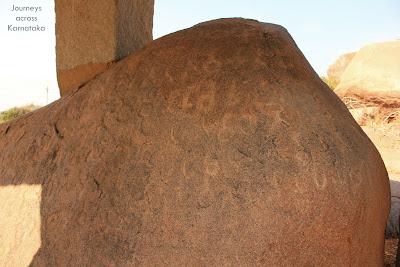 Other side of the boulder. The place is silent and peaceful. I wish I had more time to explore & inspect the rocks behind me. The ladies told us about the second inscription close by ..a minute's walk in the direction we are looking. 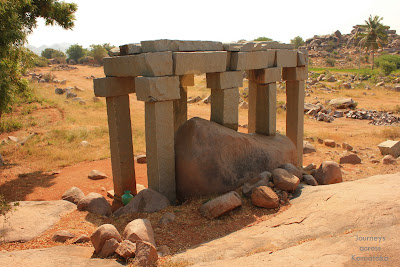 Few minutes later a man came, he seemed to be the father of the kid. He accompanies us to the second inscription. Here it is-

We were looking at a plain surface, no text. Then a careful, closer look at the rock we could identify faded text. 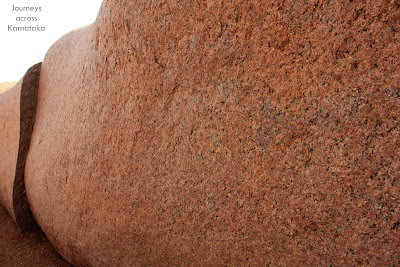 My heartfelt thanks to Mr. S B Hiremath, Director In-charge, Kannada Research Institute, Karnatak University, Dharwad for lending me the book 'Ashokan Studies by D C Sircar'. All information following this line have been sourced from this book. The author has used the abbreviation MRE for the phrase 'minor rock edict'. There are two types of minor rock edicts- MRE I and MRE II.

The Asokan edict of Udegolam was found seven months after the discovery of Nittur edict. The news was announced in March 1978 by Director of Archaeology, Karnataka. Nittur edict discovery was reported in September 1977. Both sites have MRE I and MRE II.

Nittur edict is in Brahmi script and the language is Sanskrit. MRE I is in six lines, inscription is damaged and most parts are not legible. MRE II is in eight lines and in fairly good condition. 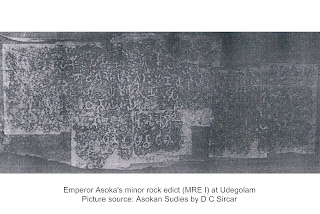 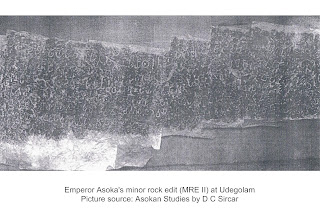 I wonder how many edicts of Samrat Asoka remain lost. He did make an effort to change the way people lived.. for the better.

Here's a map of Nittur-Udegolam area. The roads connecting Tekkalakote and these sites are dirt tracks but surface is good. 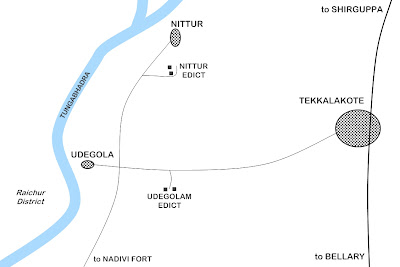 We say bye to the farmer friend & his family and head towards Nittur.

To learn about the all edicts in Karnataka check out the nine edicts of Ashoka in Karnataka.
.........
Posted by siddeshwar at 12:30 AM

Wonderful , when i visited this place , i was only person around , had tough time locating the edicts .

I have come to know widely detailed account of the find with sumptuous illustrations. However, the text of the other set you should have given because there may be some difference in the words & letters which are not found in the present TEXT.

Certainly the map is very helping to visitors following in future.

Wonderful place but i think govt is not caring it properly

@Sanskriti - thank you. whatever info was available to me has been shared.

@Unknown - one must appreciate what the Government/ASI/individuals has already done to preserve our heritage. i do agree there's more that could be done - which i'm sure will happen in future. BTW, have you visited this site? thank you.