The discovery of Asokan Minor Rock Edicts I and II at Nittur were reported in the newspapers late in the year 1977. The Nittur inscription raises the number of MRE I copies discovered in Karnataka from six to seven and that of MRE II versions from three to four. The existence of the two boulders with some writings on them was reported by E Visvanatha, a junior engineer of the Office of the Senior Geologist at Bellary to the Department of History and Archaelogy, Karnatak University, Dharwad. The inscription is situated 1½ kms south of village Nittur, Shirguppa Taluq in Bellary district.

March 8, 2013
Tekkalakote fort, Varavina Malleshwara Devasthana, Ashoka's edict at Udegolam, Nadivi fort.. those are the places we visited before coming to Asoka's edict of Nittur. Weather was warm but the carpet of paddy fields gave a cooling effect to the eyes. The edicts are situated at the base of a rocky hillock. The two granite structures in the center of the picture are recent creations to protect the boulders from sun and rain. 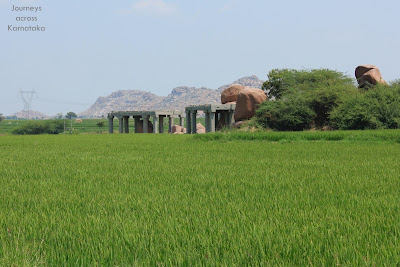 We could drive to the base of the hillock, we parked our cab near boulders. The care-taker was there alone. He was expecting us; his friends at Udegolam site had called informed about our visit. He said he was expecting us earlier, I told him about our little visit to Nadivi fort before coming here. I walked into one of the fields to get a view of boulders and part of the hillock. 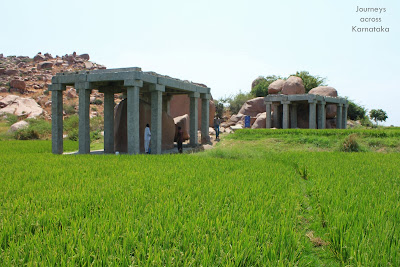 Like Udegolam site, Nittur site also has two minor rock edicts. I'm assuming that boulder on the left has MRE I and on the right is MRE II. 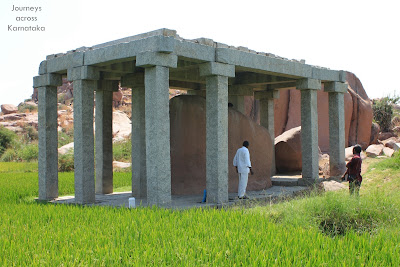 Here we are looking at the 10' high boulder, on the surface facing is the inscription. 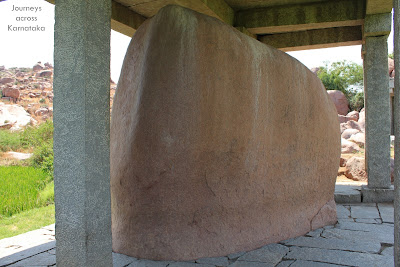 That's Mr.Prakash, the care-taker. We appreciated his sense of duty, the monument is kept clean and tidy. However, we were surprised at the absence of signage for such an important inscription. 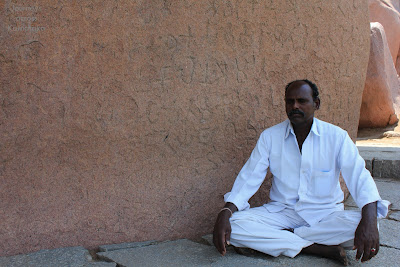 The inscription is in Brahmi script and language is Sanskrit. This is MRE I- has 7 lines covering an area measuring 4' high x 18½' long. Letters' are 3½" to 8" high. 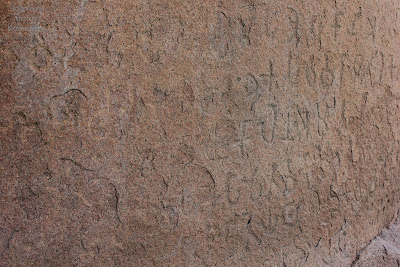 Now I turn to 'Ashokan Studies" a book by D C Sircar, to learn more about the inscription. Thanks to Mr. S B Hiremath, Director In-charge, Kannada Research Institute, Karnatak University, Dharwad for lending me this book. Incidentally, back in 1977 Mr. S B Hiremath was a member of the team from KUD who was here to document the newly discovered edict, he was a student at that time. He remembers spending four days at the site; a makeshift shelter was erected to protect them from wind and rain. Coming back to the book, it has information about recently discovered edicts of Emperor Asoka. Besides information about the discovery, transliteration and translation of the inscription, it also has photos of the impression sheets. Here are the scanned copies.

TRANSLATION of MRE I
(I) Thus saith the Beloved of the Gods.
(II) It is more than two years and a half that I have become an upasaka (i.e. a lay follower of the Buddha), but was not excessively zealous [in the cause of Dharma] for one year.
(III) However, it is more than a year that I have been intimately associted with the Sangha (i.e. the Buddhist Church) and have been exerting myself [in the cause of Dharma].
(IV) By this time, in Jambu-dvipa (i.e. Asoka's empire), people who were unmingled (with gods) have been mingled with the gods.
(V) This is the result of [my] exertion [in the cause of Dharma].
(VI) Indeed, it is not only the big (i.e. rich) men who are capable of achieving this.
(VII) Even the small (i.e. poor) man, who exerts himself [in the cause of Dharma].
(VIII) Thus this declaration has been issued for the purpose that small and big men i.e. the rich and the poor exert [in respect of] this [matter] and the people living on the borders [of Asoka's empire] may know [about it].
(IX) And [in this way] this exertion [in the cause of Dharma] becomes everlasting.
(X) This exertion will increase to a considerable extent, will increase greatly [and] will increase more or less to one and half times.
(XI) This declaration has been issued [by the king] when he was away [from his capital on a tour of pilgrimage after the elapsing of] 256 [nights i.e. days of the tour].
(XII) {This edict] has been dispatched throughout the entire earth (i.e. Asoka's empire).
(XIII) [this has been done] in the way as it was said (i.e. ordered) by king Asoka.

As seen from the side, from the space between the two boulders. 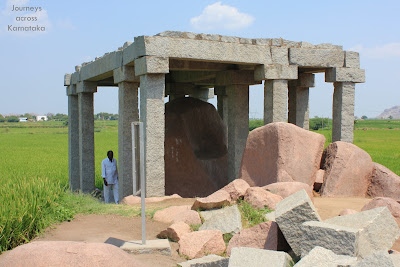 Now we turn our attention to MRE II.


This is the boulder which carries Asoka's message of peace... the same message Buddha had given the world. 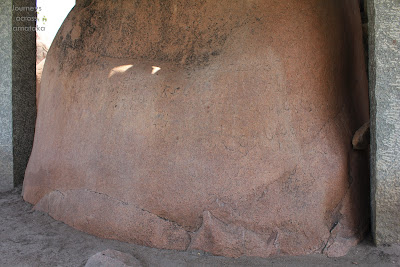 Closer look at the text. This is MRE II; it is in 5 lines covering an area measuring 3' x 19'. Letters are smaller compared to MRE I. 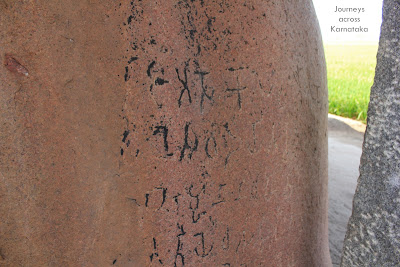 TRANSLATION of MRE II
(I) Thus saith king Asoka
(II) You (ie.e the Kumara and his Mahamantras) [should] pass orders on the Rajjuka
(III) He will pass oredres on the people of the countryside as well as on the Rastrikas.
(IV) "[One] should be obidient to [one's] parents."
(V) "In the same way, [one should be obidient] to one's elders."
(VI) "[One] should be kind to the living beings."
(VII) "One should propound these attributes of Dharma."
(VIII) [Thus] you should pass orders on the Rajjuka.
(IX) He will then pass orders [on his subordinates] in the words of the Beloved of the Gods.
(X)  Therefore you should pass orders [on the Rajjuka].
(XI) And in the same way, [orders should be passed on] the Brahmanas (i.e. the teachers of the Brahmana community) elephant riders, scribes and charioteers.
(XII) '[You should instruct your pupils] in accordance with what is the ancient usage'
(XIII) [He, i.e. the Rajjuka] will pass orders [as follows].
(XIV) "[The instruction] should be obeyed [in the same way.]"
(XV) "This should be held in respect."
(XVI) "The teacher should be honoured and obeyed."
(XVII) "Again, those who are the teacher's [kinsmen, among them also the instructions should be established.]"
(XVIII) "This should be established in the proper manner in accordance with what is the ancient usage."
(XIX) "{This] should be established in such a way that it becomes abundant."

Here's a map of Nittur-Udegolam area. Roads connecting Tekkalakote and Udegolam/Nittur are dirt tracks but surface is good.

Today we are keeping up with the itinerary, the progress is good so far. Next on our list is Halaekote, a fort between Tekkalakote and Shirguppa.

To learn about the all edicts in Karnataka check out the nine edicts of Ashoka in Karnataka.

Wonderful to know more about this site . Where can i get the copy of the book" Asokan studies" . Have read somewhere about one more site with Asokan edicts near by these places. According to that book, it say that site is located about 16 km from Siriguppa , unfortunately i don't know remember the name of the place and strangely didn't make any attempt to find out when i was there . Do you have any information on the third site .
Thank you

Thank you TGS. I think you are referring to the major rock inscription at Yerragudi in Andhra Pradesh. About the book, I'll check with Mr.Hiremath and let you know.

No, its in Karnataka, name of hill is something like Shurkadappa Betta.its a minor rock edict.

very brief and to the point, good to see that you include ample historical information about the place. Keep up the good work.
Saurabh Saxena
http://puratattva.in

@ Team G Square - the inscription rocks are in fact next to Shurkadappa Betta, the rocky hillock seen in the pictures of this post. I happened t read this in notes on South Indian Epigraphy.

The script is Brahmi and the language is Prakrit and not Sanskrit.

Surendra, thank you for correcting the error.

Very nice. I find the texts which I requested in my earlier comment on Udegolam. Appreciable job you did.

Thanks for this post. It has elaborate information.
I am planning to visit this place. I am from Pune (Maharashtra) and do not know Kannada at all. Can you please tell me in detail how can i visit this place? Public transport is only option for me.
I have started studying Ashoka recently and i am very mesmerized by this greatest emperor ever walked. He has also been subject of my recent paintings.
Your help will be appreciated.

Thanks. Myself with wife saw this rock edicts at Udegolam and Nittur.

@Yohesh - pardon me for a very late response. Hope you got to visit this site.