My introduction to Asokan edicts (conveying Buddha's message of peaceful existence) started with Gavimath edict followed by Palki Gundu and Maski sites. Of nine edicts in Karnataka I had visited three. Next on my plan were edicts in Chitradurga district. This map shows the location of three more edicts- Jatinga Rameshwara, Siddapura and Brahmagiri - all within a diameter of 5 kms - situated at the northern tip of the district. 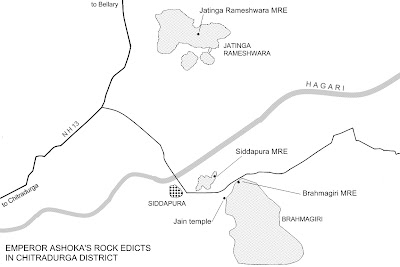 March 7, 2013
First half of the day was spent at Sangankallu Neolithic site. After lunch at Bellary we drove down NH13 towards Chitradurga. We knew we had to turn off the highway few kilometers after Rampura town. Near Rampura bus-stand we stopped to check directions before proceeding. The person whom we spoke to was also going to Siddapura. Our new friend joined us and we got introduced as we traveled. Anantapadmanabhachar is a headmaster of government school at Rampura. He's originally from Siddapura, now settled in Rampura. took us straight to the monument. Here it is- a neat little stone structure to protect the inscription conveying Samrat Asoka's message of peace, situated at the northern base of Brahmagiri hill. 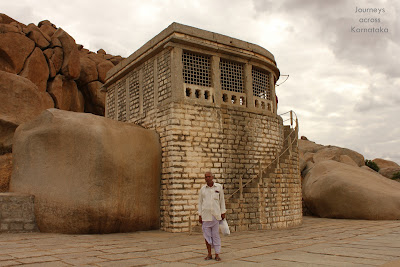 The protective enclosure was locked, no sign of security or caretaker around. We have to content looking through the grills. 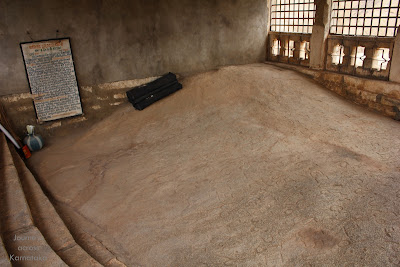 The inscription is engraved over an area measuring approximately 9' x 13'. Text is read from this direction. 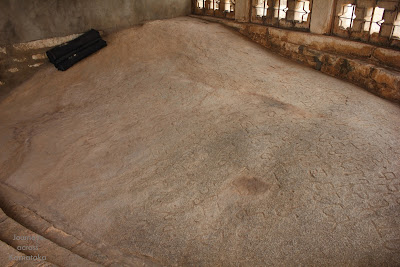 The letters were clearly visible to eyes but capturing them with a camera needs few trials. For better visibility of letters in the image I had to shoot it from the opposite side i.e. the letters are upside down in this view. This inscription dates back to 300 BCE. Language is Pali and script: Brahmi. 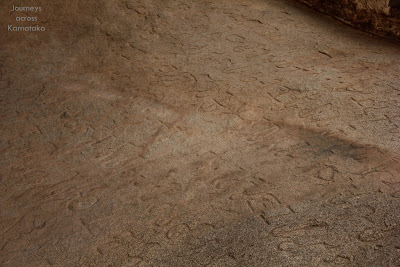 That's our host and Malatesh standing at the door. Malatesh is making a video. 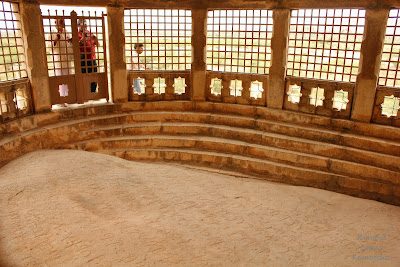 With permission from Mr.S B Hiremath, Director in-charge of Kannada Research Institute (KRI) at Karnatak University, Dharwad I was allowed to refer books at the department's library. After a bit of searching I found transliteration and translation in Corpus Inscriptionum Indicarum Vol I. Thanks to the librarian Ms.Vijayalakshmi Sangam for patiently finding the book needed.

TRANSLATION
(A) From Suvarnagiri, at the word of the prince (aryaputra) and of the Mahamatras, the Mahamatras at Isila must be wished good health and be told this:
(B) Devanampriya commands (as follows).
(C) More than two and half years (have passed) since I (am) a lady-worshipper (upasaka)
(D) But indeed I had not been very zealous for one year.
(E) But indeed a year and somewhat more (has passed) since I have visited the Sangha and have been very zealous.
(F) But men in Jambudvipa, being during that time unmingled, (are now) mingled with the gods.
(G) For this is the fruit of zeal.
(H) For this cannot be reached by (a person) of high rank alone, but indeed even a lowly (person) can at liberty attain the great heaven if he is zealous.
(I) For the following purpose has this proclamation been issued, and (that even) my borderers may know (it), and (that) this zeal may be of long duration.
(J) And this matter will (be made to) progress, and will (be made to) progress even considerably; it will (be made to) progress to at least one and a half.
(K) And this proclamation was issued by (me) on tour.
(L) 256 (nights have been spent on the tour)
(M) Moreover, Devanampriya speaks thus
(N) Obedience must be rendered to mother and father, likewise to elders; firmness (of compassion must be shown towards animals; the truth must be spoken; these same moral virtues must be practiced
(O) In the same way the pupil must show reverence to the master, and one must behave in a suitable manner towards relatives.
(P) This is an ancient rule, and this conduces to long life.
(Q) Thus one must act.
(R) Written by Chapada the writer.

The inscription boulder is situated at the northern tip of Brahmagiri base. This enclosure was built by a British officer; thanks to his initiative towards preserving Indian heritage. I wish our countrymen, especially the so called leaders develop such traits in preserving their own heritage. 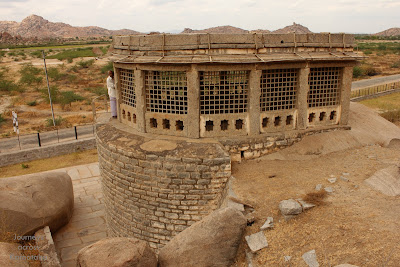 Brahmagiri hill looks like a heap of boulders, however the slope close to the edict was gradual slope, we climbed as far as it was friendly, to get a view of the surroundings. In this picture below, the hill at the top-left corner is Jatinga-Rameshwara and in between the narrow longish yellow patch is Hagari; totally dry, all we could see was sand. 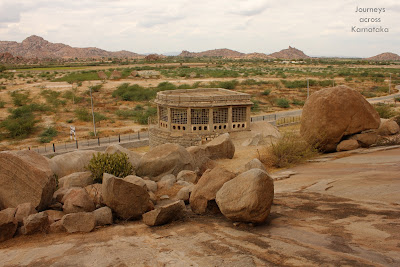 Here's a short video by Malatesh.

My wish was to see all three inscriptions but I had no hopes of seeing them all today mainly because of time constraint. I wanted to see Gudekote before sunset so we had leave early. The other reason being not knowing the correct locations of Siddapura and Jatinga-Rameshwara inscriptions. Our friend created little confusion, Anantapadmanabhachar said Bramhagiri edict is the only one here, did not know the existence of the other two. Also, I guessed Jatinga-Rameshwara hill climb will be a long one, something to be done early mornings. We could have looked for Siddapura edict but I let it pass, anyway I have to come back here.

Anantapadmanabhachar wanted to show a Jain temple west of Brahmagiri hill. The temple is well preserved. 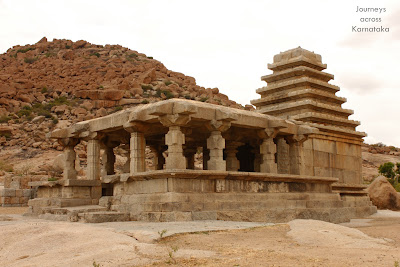 The temple interior is as simple as the exterior. It has a mukha-mantapa and a garbhagudi. On the garbhagudi door frame was a small image of Mahaveera in padmasana. Outside the temple we could see three hero-stones and a platform with several sculptures of serpents and a black-stone Ganesha. In this picture below, to the right edge is Siddapura hillock- it seems that Siddapura inscription must be situated there. 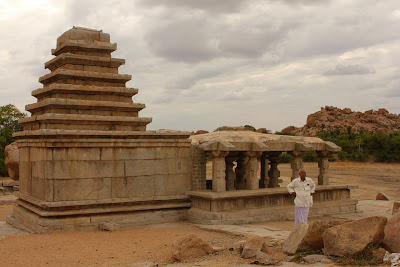 Next to the temple was a foundation of another temple, for some reason construction was abandoned. See one of the hero-stones (inset). Opposite the temple is pond, of course its dry now. 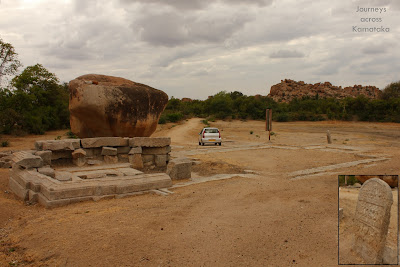 So head back, stop for a minute at Gram Panchayath office for Anantapadmanabhachar, he wanted to hand over a letter. We headed back towards Rampura... I was wondering how come our friend is ignorant of the other two edicts ...anyway, when I come here again, I'll ask him to join the search. We dropped off our friend at Rampura and head towards Gudekote to see the little fort over a rocky hillock.

Brahmagiri has lot to offer . Sad that you didn't meet the ASI guy who takes care of all the three sites . He quite knowledgeable and friendly guy . There is a megalithic burial site and urn burial site near by Brahmagiri .The temple is akka thangi temple and not Jain temple , there is one more temple little further from this place which is the jain temple.

Thanks the correction. We missed the megalithic tombs close to the base of the hill. I'll remember to allot more time during my next visit.

I remember reading about an inscription from Ashoka's times in Brahmagiri. Can't remember where, perhaps in ASM journals or in a John Keay's book. But all the while, I had presumed it to be somewhere in Brahmagiri Hills of Coorg! Enlightened! Thank you.

O.K. all this is real cool for me, a history buff, but how do I make this place interesting for my kids who will accompany me on this trip, and in general for any school child? Just to go through all that travel to see an inscription on a rock does not attract children. Please let me know if there is anything fun that I can do with children. Or, maybe it is not a place for children!

Puttanna, your angle of thought is interesting. Here are my thoughts; you can explore Brahmagiri hill, the climb might interest the kids. Brahmagiri is a prehistoric site, perhaps you can take a look at the megalithic tombs. Close by is Hagari river; if there's water, no saying how much kids love water; if not, you can explore the sandy river bed. Hope this helps.

Hi I heard people saying that bramhagiri edict include some Kannada alphabets as well?? Is this true..? We all know that Kannada was widely spoken at that tym. Let me know if yu guys are sure about it so that we can add this up in history of our language..

The Halmadi inscription of the Kadamba of around 450 AD, is the well know Kannada inscriptions. However I am not sure if the Brahamagiri inscription would haves these, it was issues by the local governor of the mayurian empire from Suvernagiri and mostly its in Pali suitable for the Buddhist groups

The word ISILA in the script is considered as the first Kannada written word. It was explained in detail by well known historian Dr. Sha. Shettar in one of his scholarly articles. I don't remember the title of the article or the book. But the word 'isila' as the first writtenkannada word is etched in my memory.

Which of the minor rock edict 1 in Karnataka having the name ashoka ?
Other than maski and brahmagiri..