December 24, 2012
During our visit to Yadgir: After the tour of Yadgiri fort next on the list was Wagangera fort. God knows why I asked for Wadgera instead of Wagangera and drove a while towards Wadgera. That mistake resulted in loss of 1½ hours which in turn upset the rest of the day's itinerary. One silly mistake delayed the visit by 11 months.
November 27, 2013
The second day of the trip. The previous night we had camped at Taylor Manzil, Shorapur. It was experience to be staying in a 19th century building designed and built by Philips Meadows Taylor. We left Shorapur at dawn, Shorapur-Wagangera is barely 8 kms, by sunrise we were navigating through the narrow streets of Wagangera village. Our car went right up to the base of the hill, from there it was five minute climb to the fort gate. 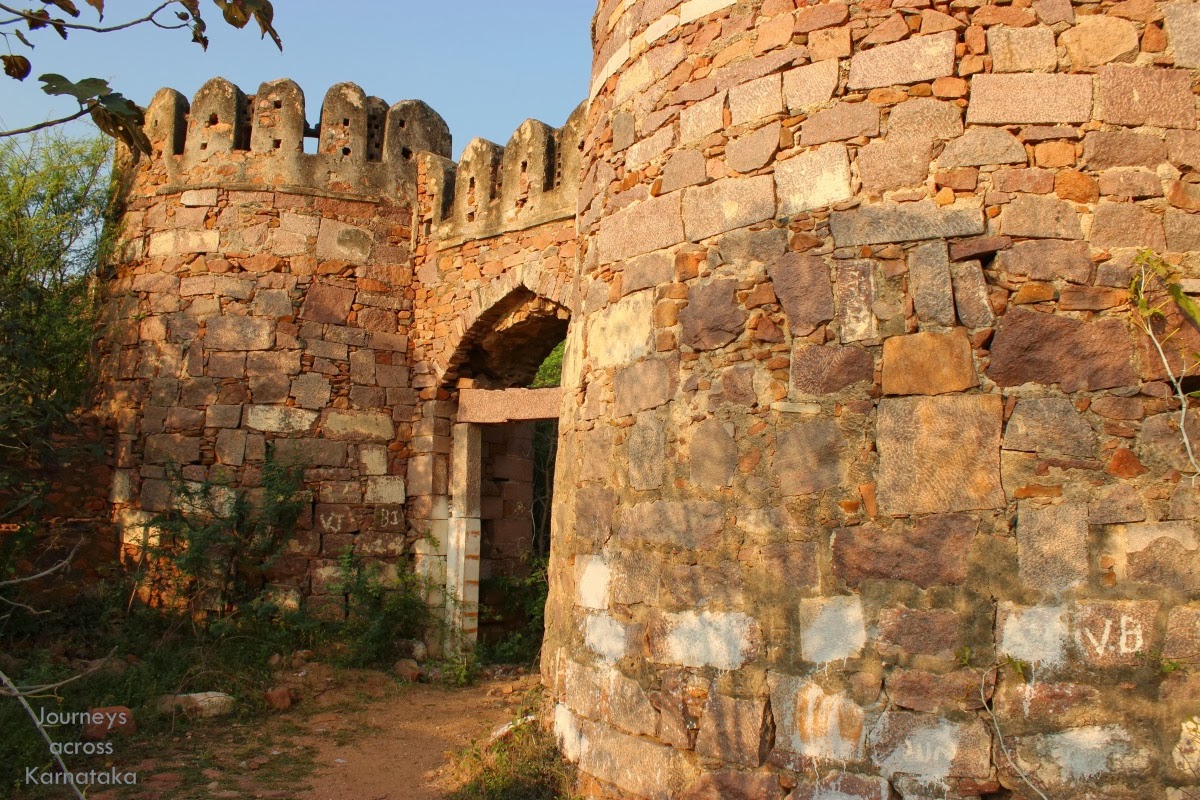 Just as I reached the entrance, a resident of the village came. He had come for a morning walk, introduced himself as Venkatesh Bappargi. He was polite and told me to walk along the fort wall, it would be easier to the fort that way. He also told that Aurangzeb's son was buried here.

Wagangera fort is situated on Shorapur hill range. In fact Wagangera was a power center in the pre-Nizam times. During Nizam rule, administration was shifted to Surpur. Present day Wagangera village is nestled between a large hill and a hillock. The main fort is on the large hill and the hillock also has fortifications which would have little more than a watch tower. Now I'm on the larger hill, looking towards the mantapa in front of the main fort's gateway. That mantapa might have been the place where the king would sit and watch over the lake below. 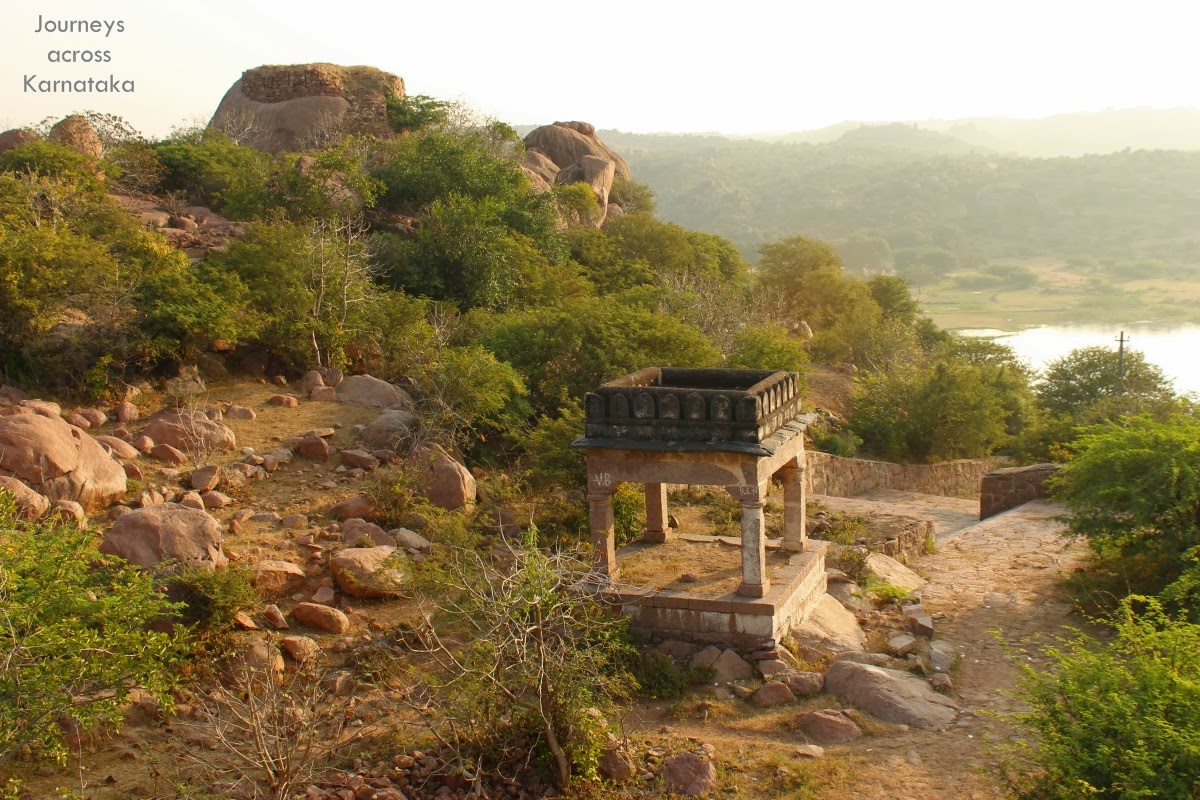 Scanning the space in counterclockwise.. View of the rampart wall from the main gateway terrace. 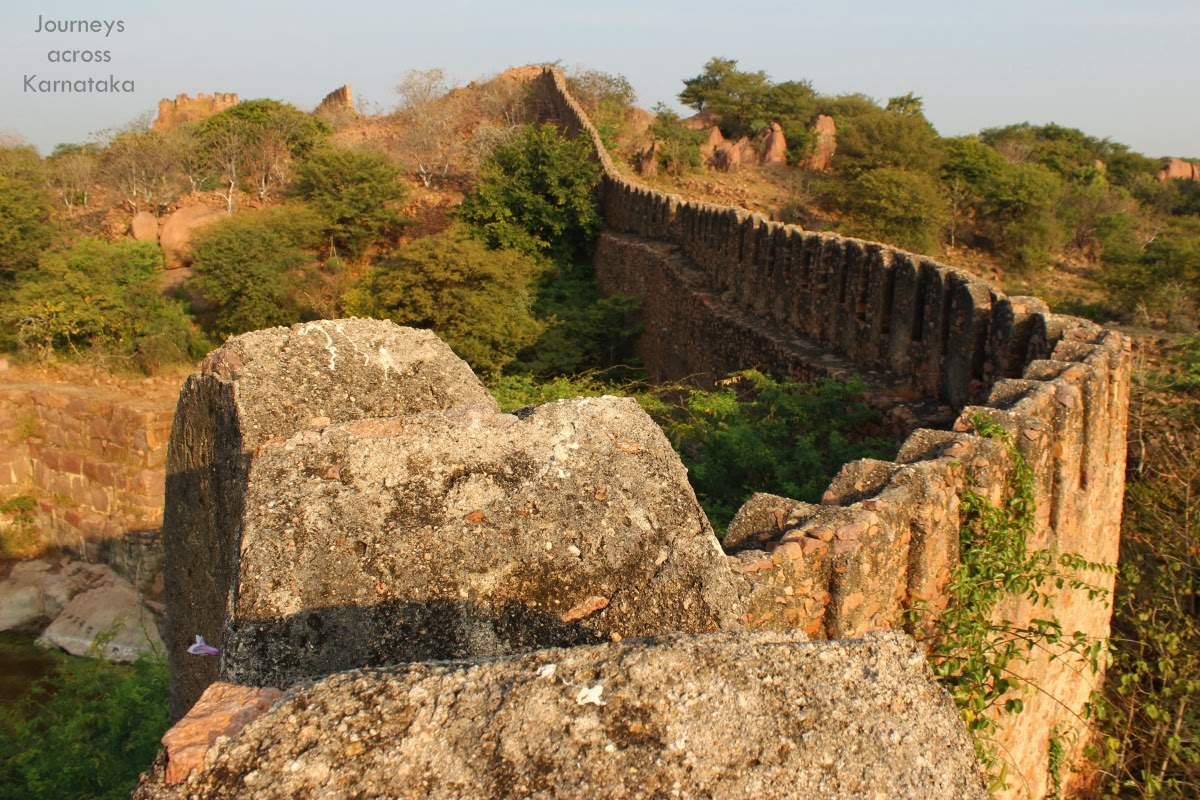 A large water tank close to the main entrance. 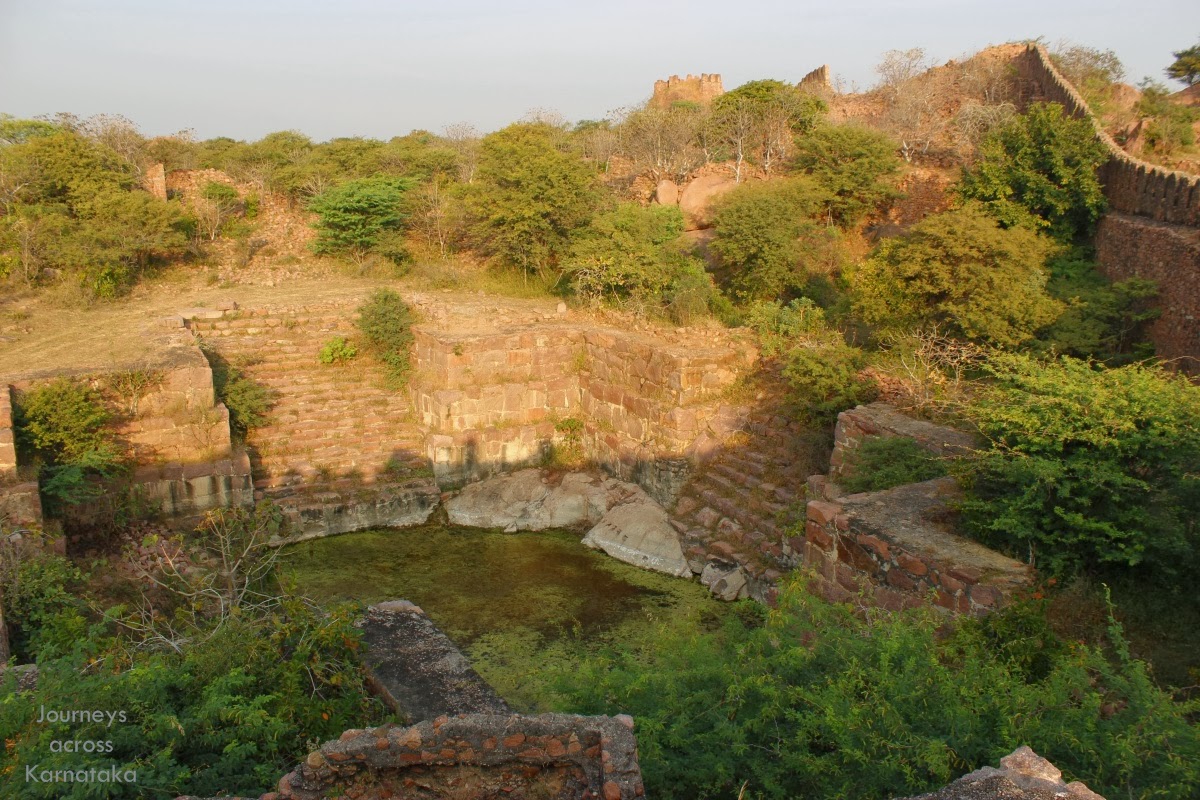 A large rock formation with a shrine at its base and a sentry nest at the top. Notice the merlon with musket holes. 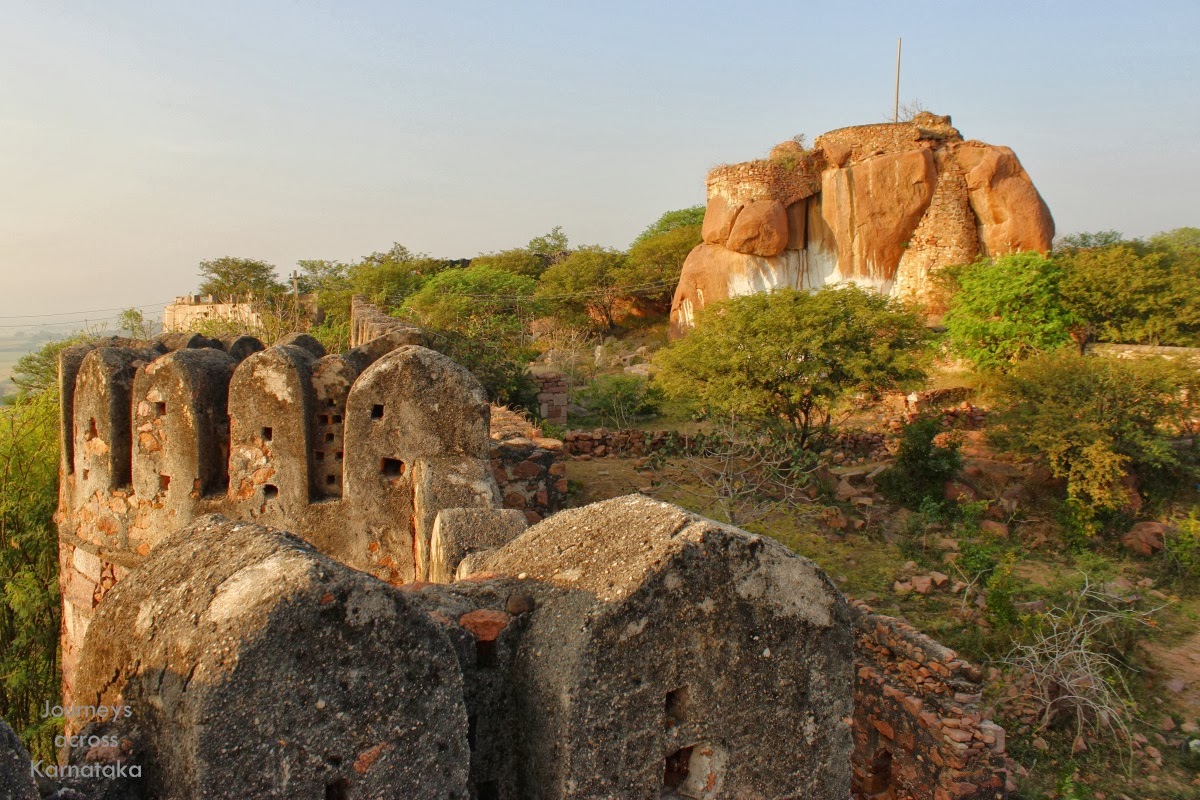 This shrine is supposed to be dedicated to Venugopalaswamy. Next to this shrine is a small enclosure with few tombs. One of the tombs is said to be Aurangzeb's son and rest could be his family members'. 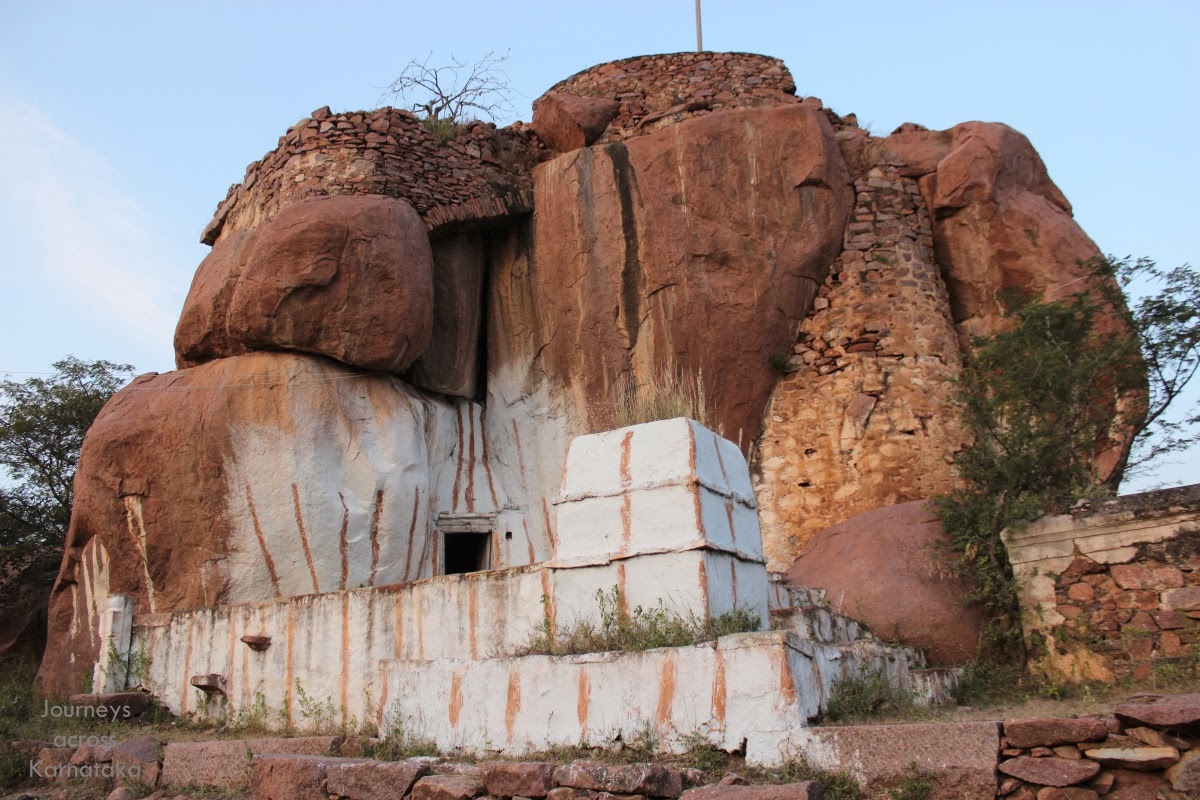 Again close to Venugopalaswamy shrine is a partially built temple. As you see construction has been abandoned while walls were being built. The space between the two half built walls was meant for Garbhagriha and the circle would have been the center of Sabha Mantapa. Also there was a large collection of semi-finished beams and columns, all meant for this temple. I guess Wagangera was a feudatory of Vijayanagara empire and this temple was being constructed then. Looks like- after the fall of Vijayanagara at Talikoti battle all temple constructions were halted. 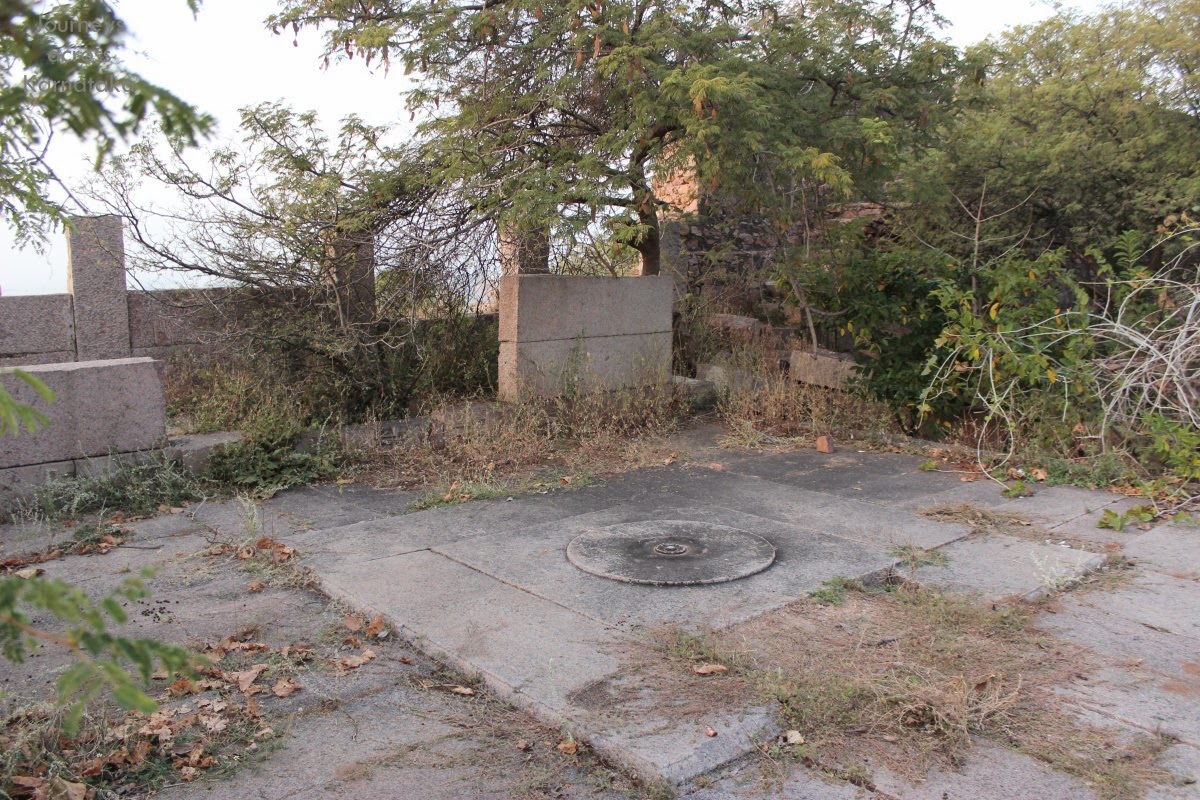 This reminds me of the temple at Gandugali Kumara Ramana Kote; the architecture is similar and work has stopped at similar stage.

That's the hillock with watch tower and in between is the lake and dwellings. 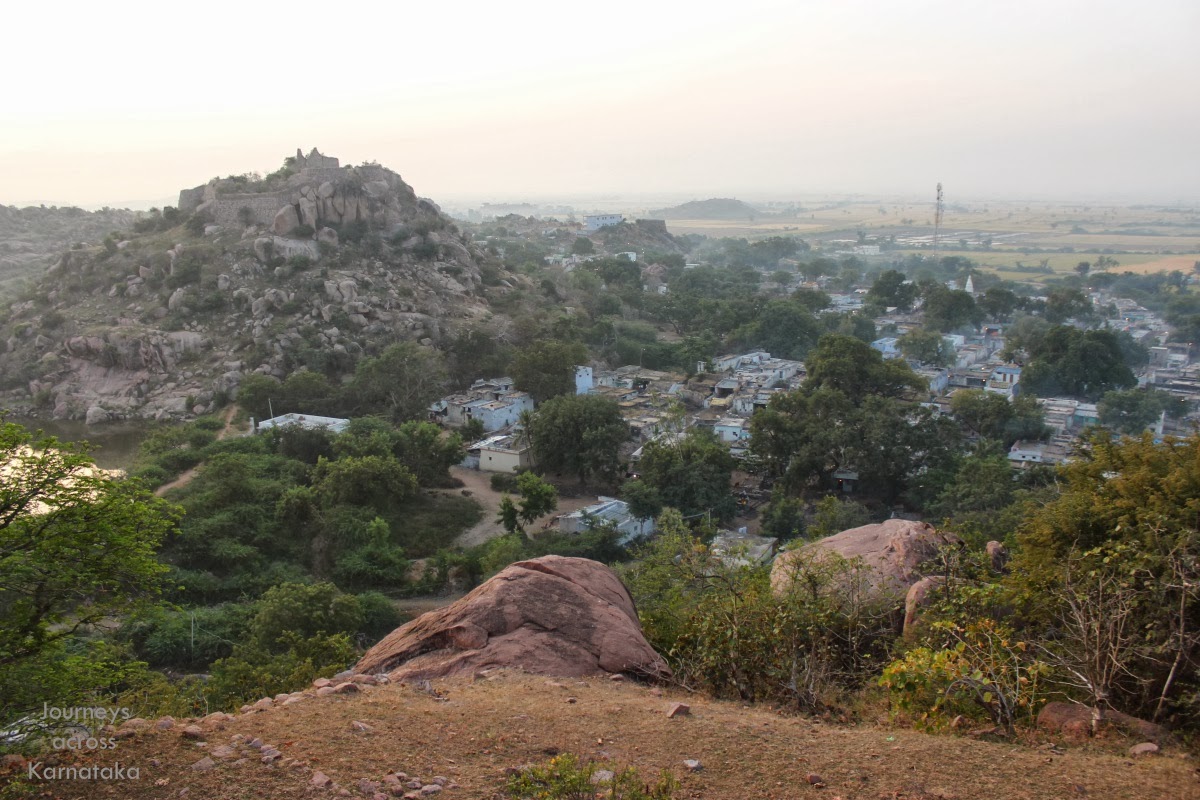 Southern wall built over natural rock formations. Within the fort are ruins of several structures which might have been officers' quarters or barracks. This wall has a shoulder wide enough for an armed soldier to walk. As Venkatesh suggested, I walked on the wall, it gave a good view of both inside and outside. 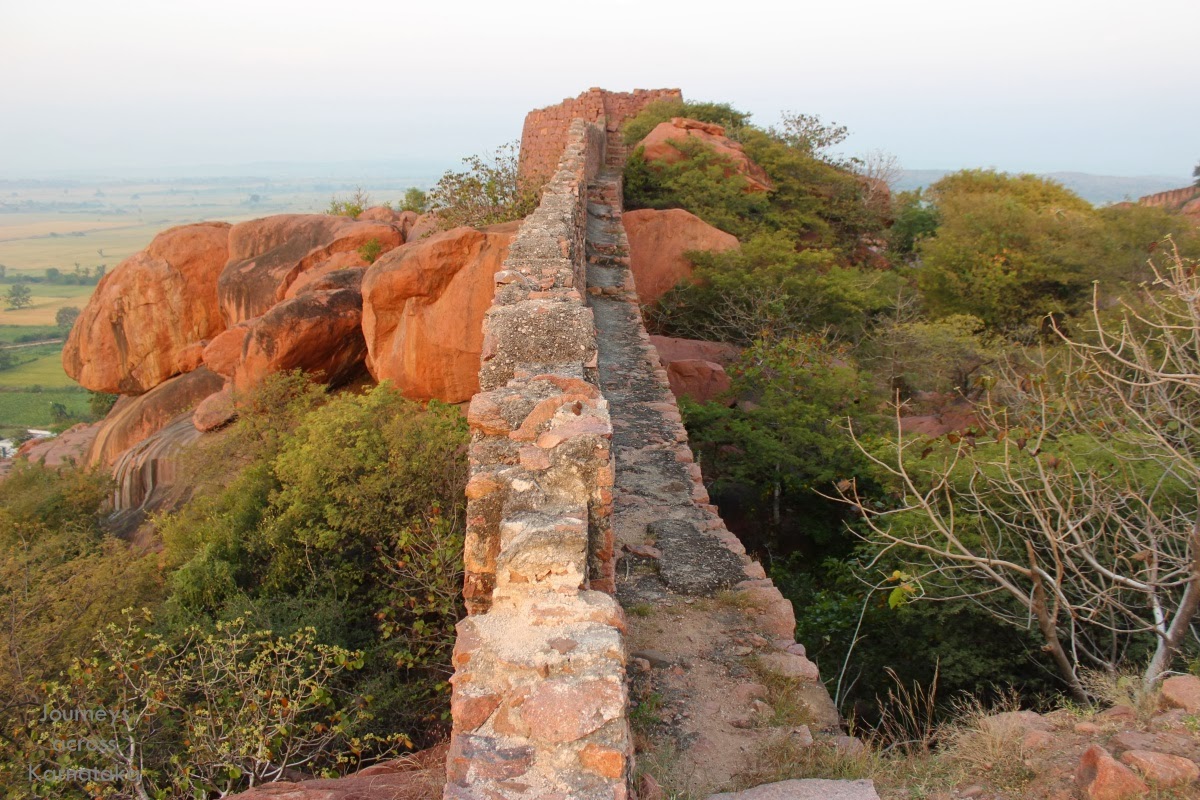 The slopes, walls and the plains below. In the depression is a gateway. Close to the water tank below are two more bastions - that indicates the water tank was within the fort walls. Since there's only one water tank on the hill top it was crucial to have one more within the walls. 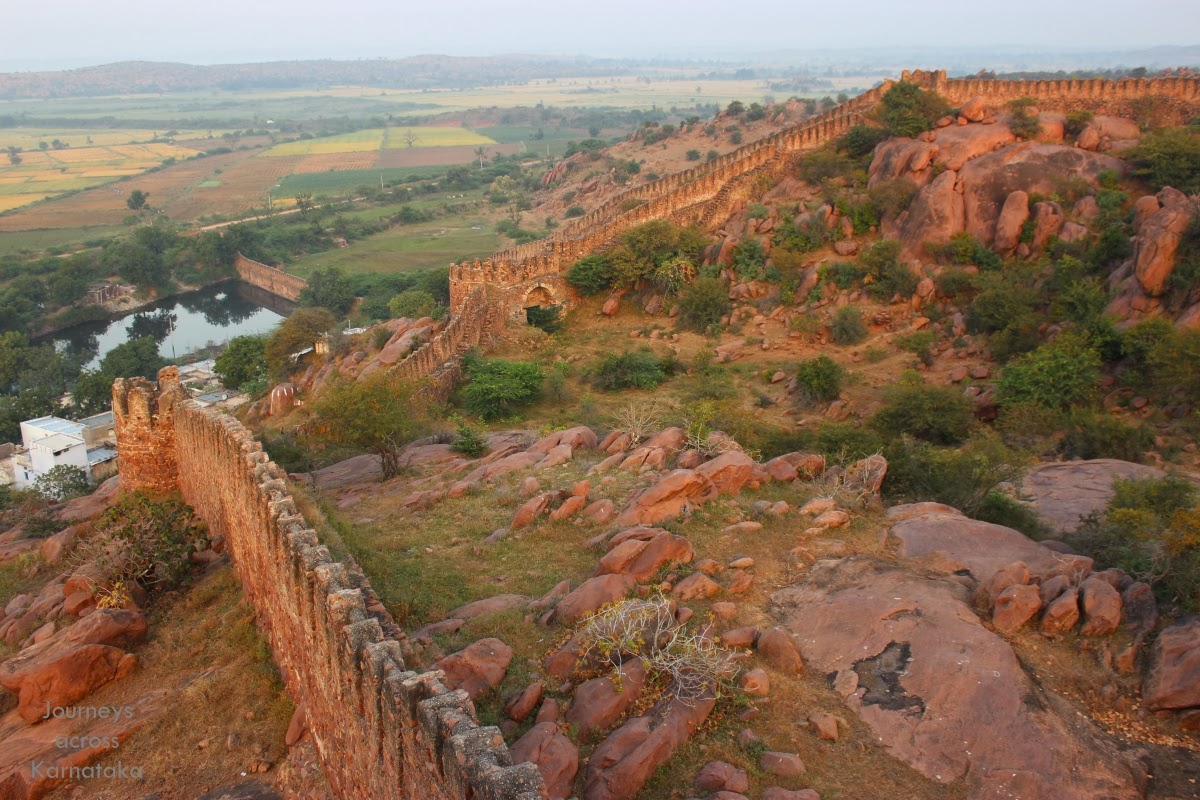 Scanning clockwise- that's the fort center and the highest point. 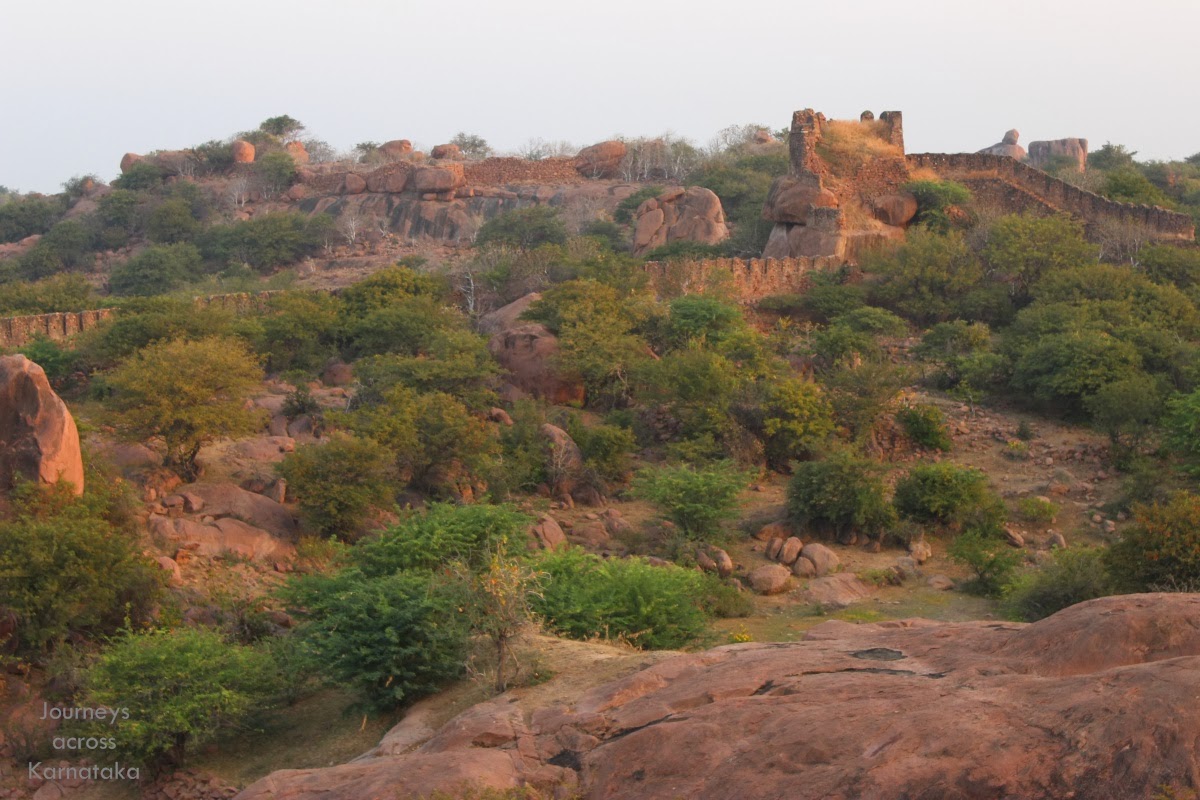 Looking back the path I just tread. At the far end of this wall is the rock formation with the sentry nest. 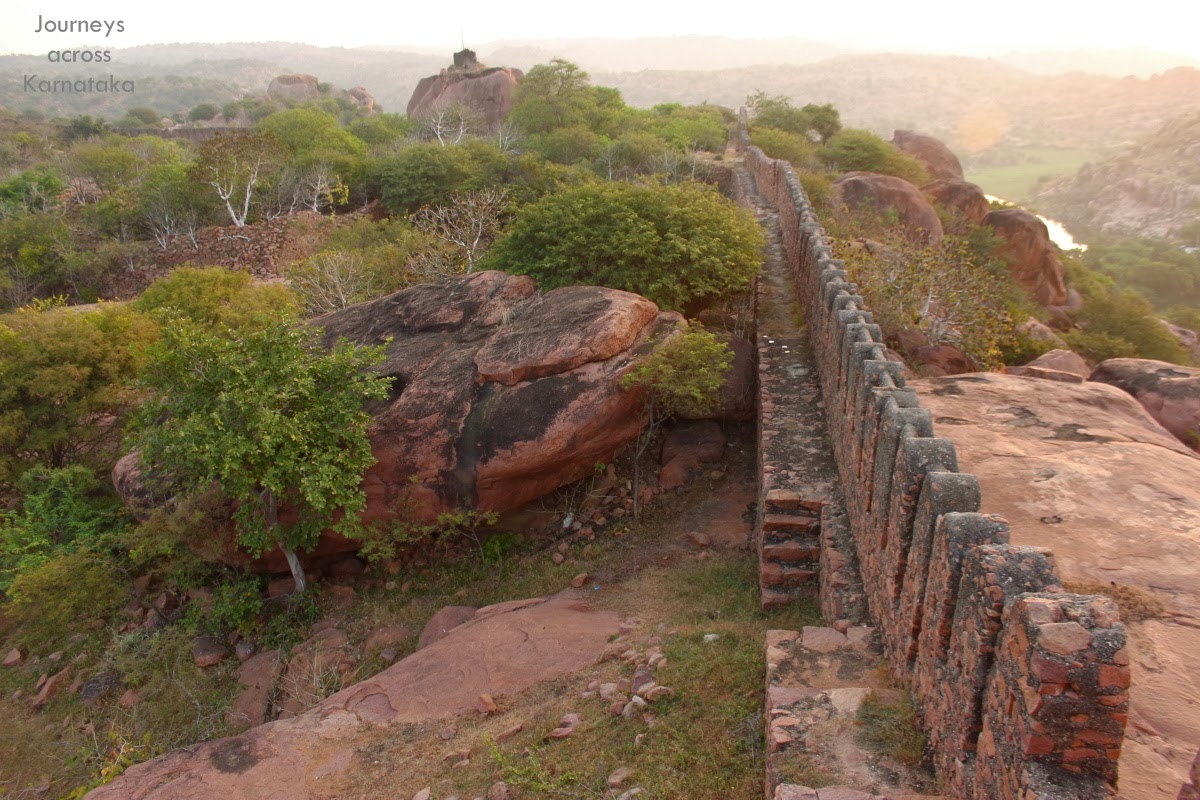 Another nest - that's where I was a minute ago before I came down here. Venkatesh was guiding me from one point all the while. He asked me to leave the wall and walk down to avoid a gang of langur monkeys on the next bastion. I was glad he was watching over carefully. He asked me to see an inscription on the outside of the gateway and see the rest of the hill. He invited me for breakfast and left. 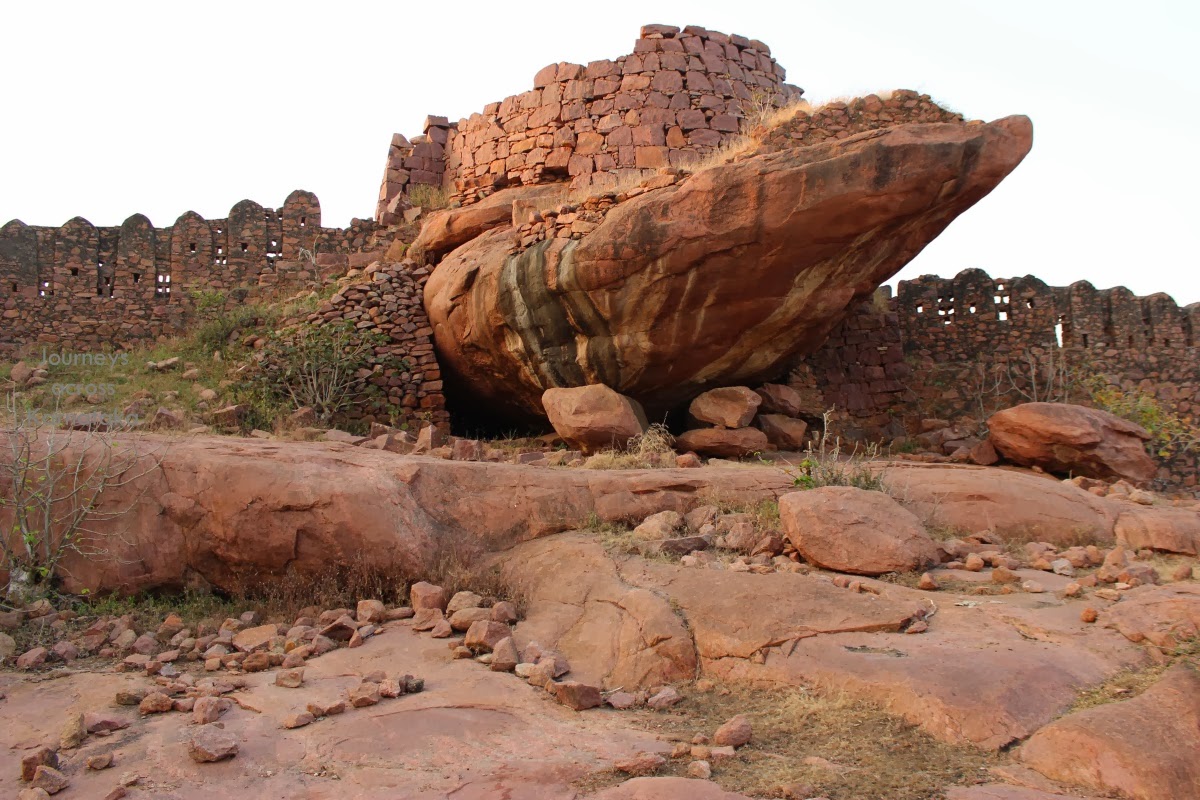 The western gateway is similar to the main entrance, just above the lintel is the black granite tablet with Persian inscription (see inset). 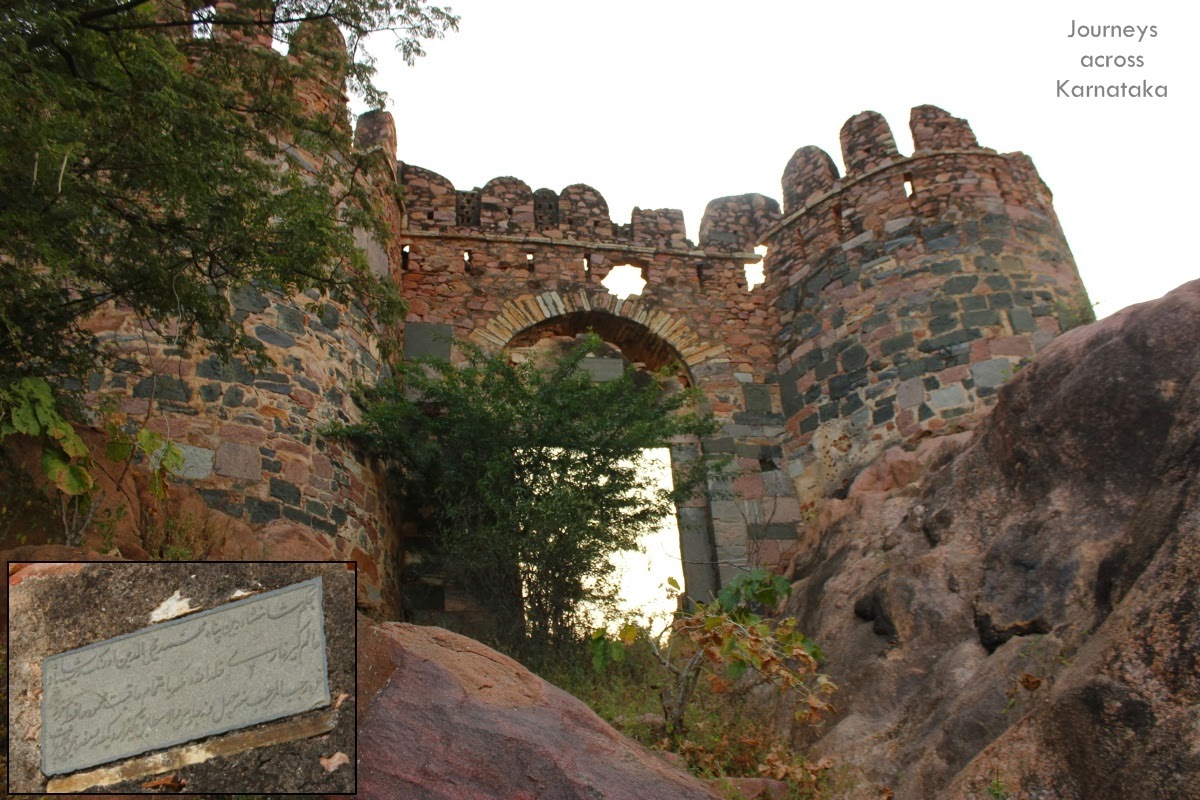 I climb back to the fort center.. 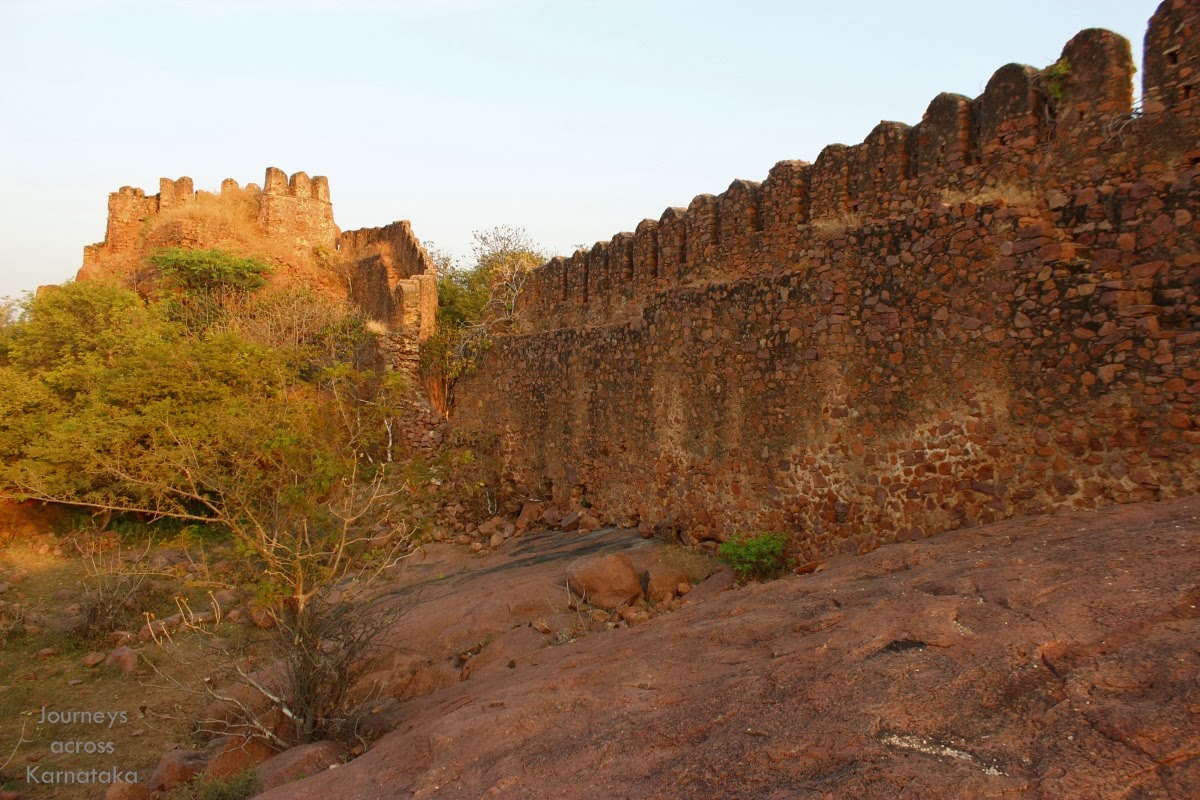 ..to explore the northern side. This side of the fort is called Lal Gadh meaning red rock. Venkatesh told me that hundreds of Aurangzeb's soldiers were slaughtered here and the entire hill top was covered in human blood.. hence the name Lal Gadh. 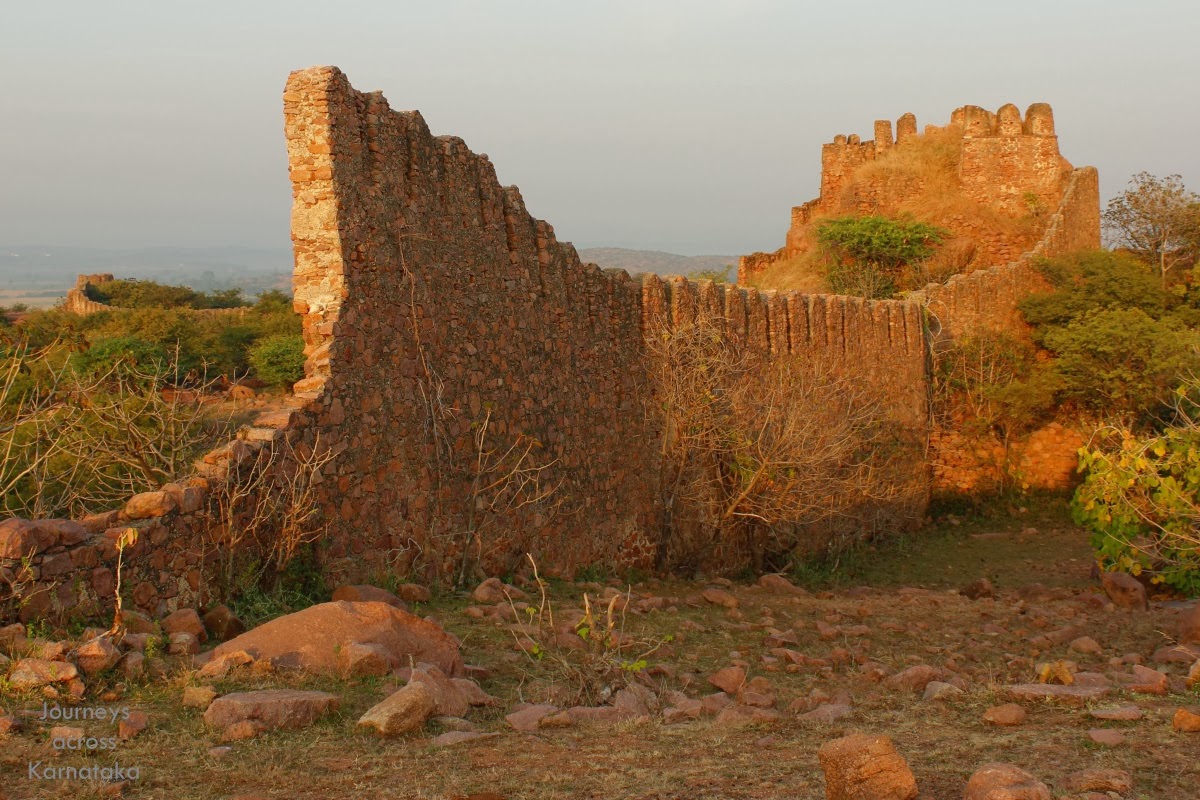 At the northern most part of the fort is a enclosure.. like a fort within a fort. That's the entrance. 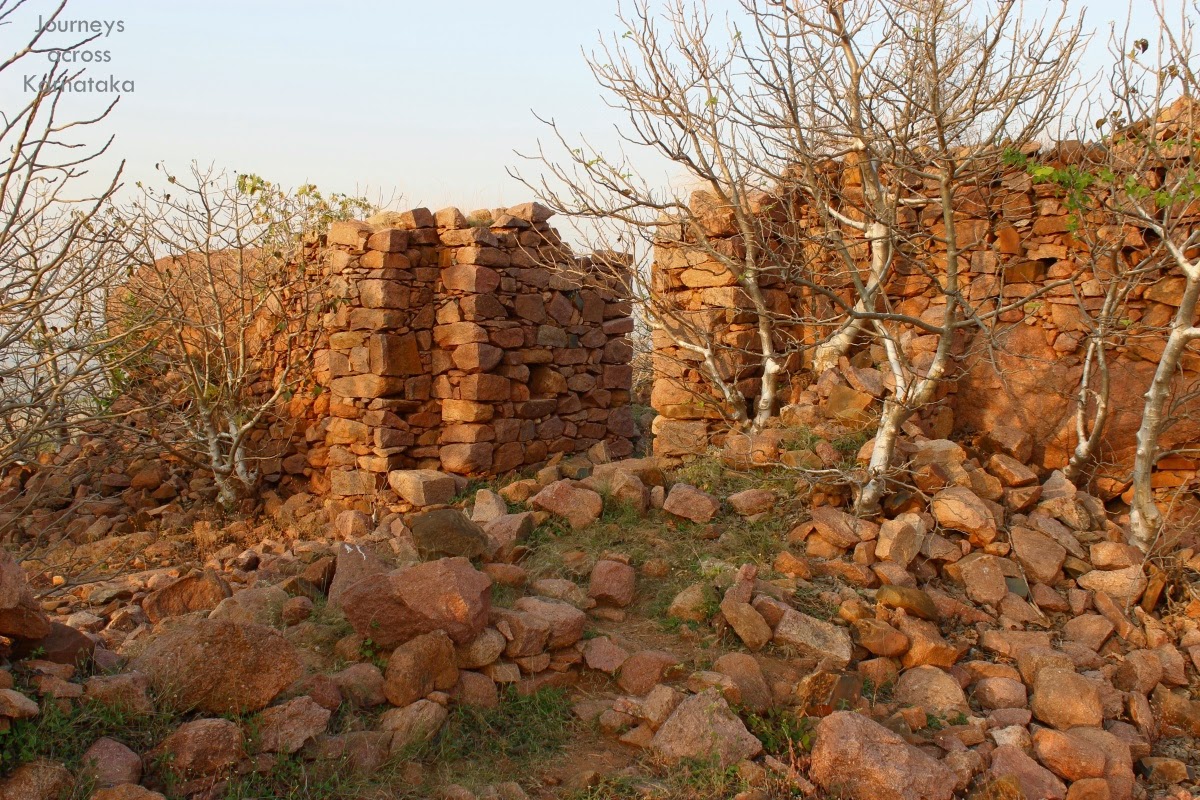 Space within the enclosure is level, couple of rocks at the center. At the far end are ruined structures which might have been dwellings. 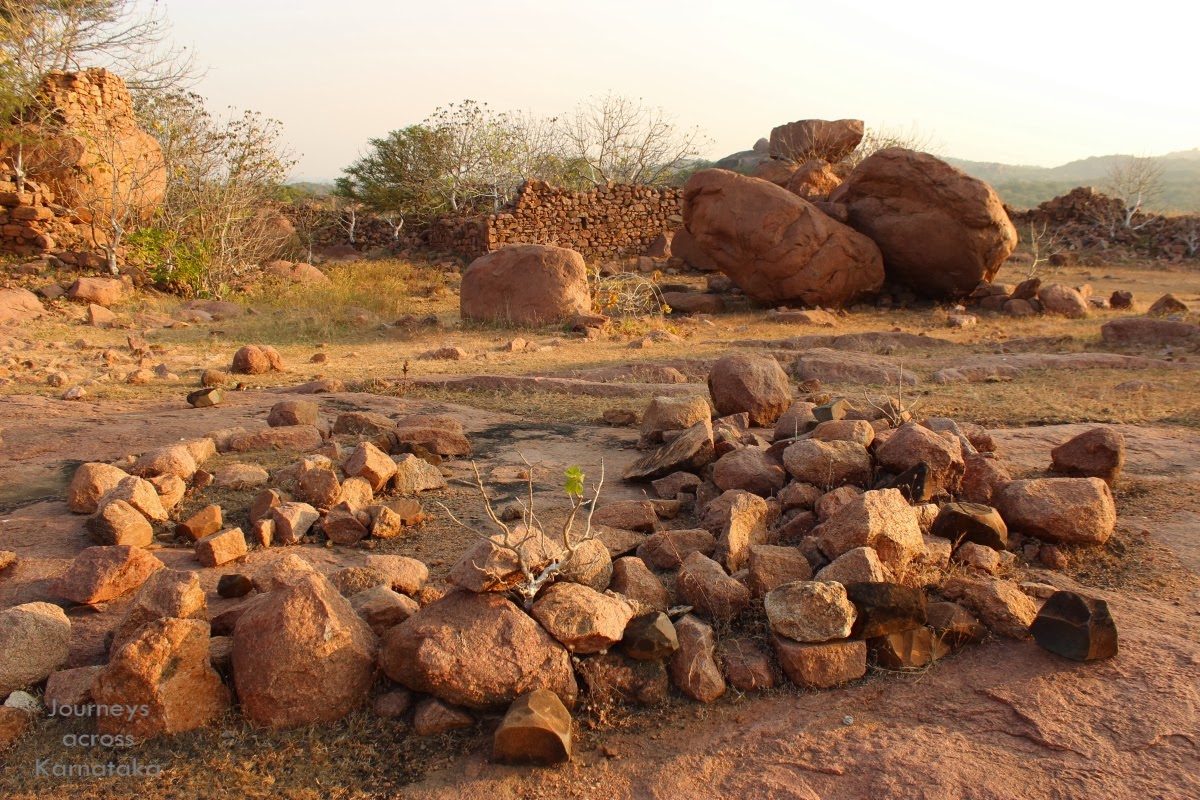 Here a piece of ceramic piece caught my attention, it was white with blue floral prints. I feel it might be from the Mughal period. 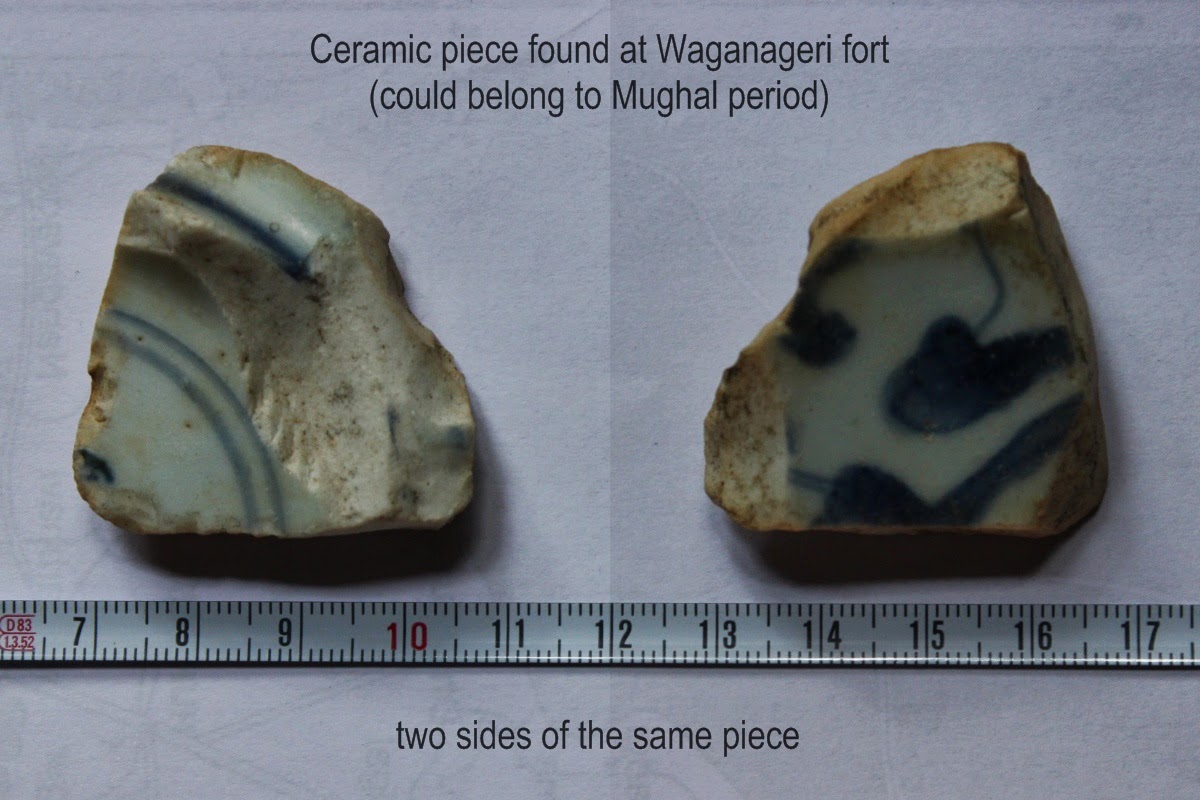 Looking beyond the fort wall. Quarrying activity on this hill too!! 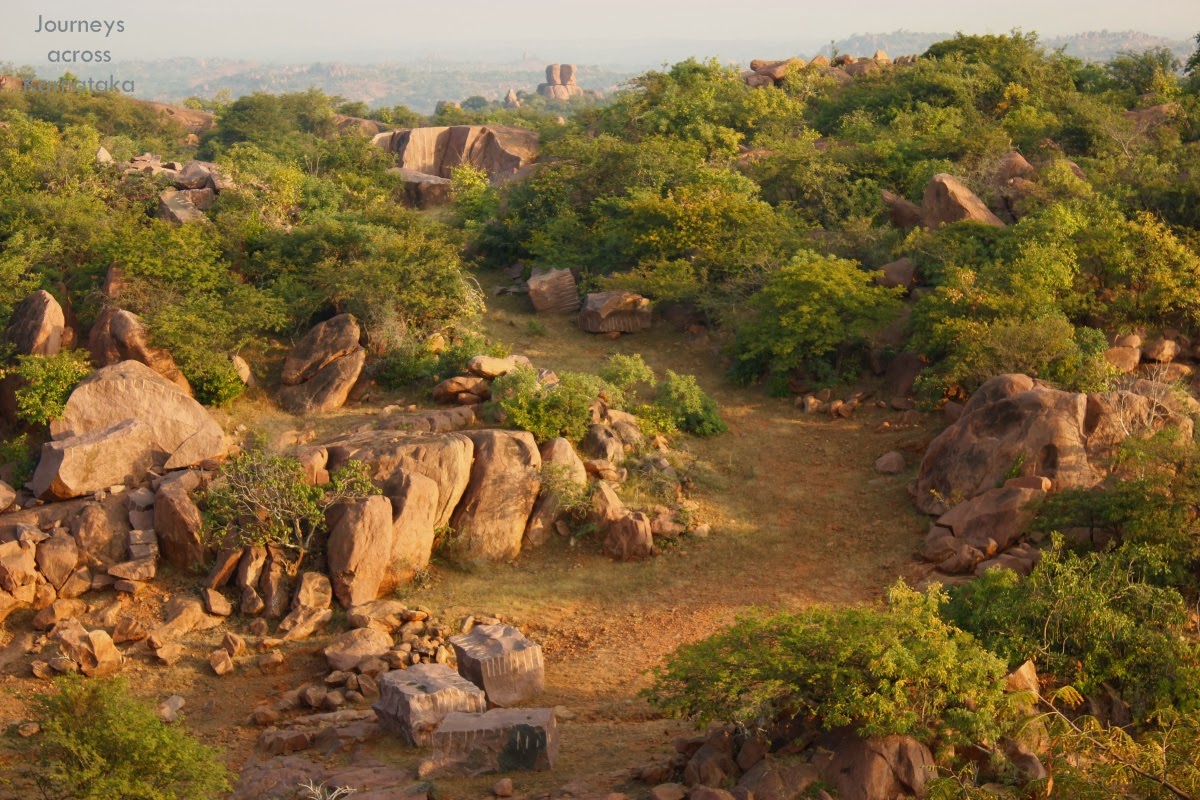 Having done with the fort, I descend the hill. Back at the village I find Venkatesh's house. I was introduced to his family, a warm welcome. We had a hearty breakfast of dosa, palya and chatni.. I relished the dish, excellent preparation by Mrs. Bappargi.

Venkatesh made the visit to Wagangera a memorable event. I thank them and leave for my next destination- Deodurga.

March 9, 2014
Venkatesh introduced me to his friend Kanakappa Waganageri who has done research of his place. He shared some information over a phone call-

During the rule of Pitambari Bahari Piddanayaka Aurangzeb's army commanded by Diler Khan attacks Waganageri kingdom. In the battle Diler Khan and his soldiers were slaughtered in Waganagari fort, to this day the place of slaughter is called Lal Gadha.

How do you keep unearthing such gems and meeting nice folks too? So by your count, how many forts are there in Karntataka and how many have you visited so far?

Please include the district name and directions in the last part of your post with the coordinates.

Thank you for the kind words, Nirdesh. Your suggestions are welcome, will include district and directions in forthcoming posts. 220 forts have been identified+, visited 120+ and looking forward to visit 100 more. List keeps growing.. People have been very helpful on so many journeys, they make my trips :)

hello siddeshwar,
Great work !!! I really appreciate it. I strongly advise you to publish your travelogue to a paper book. this is really informative.

I see that most of these ruins are in villages or in small towns without much attention from the authorities. if left like that in coming years there will be no trace of them.

Cann't the villagers take a drive to preserve whatever is left and make them their village identity?

Do you also try to educate the villager during visit?

This fort is said to be the last one to be conquered by Aurangzeb. He had wheeled from Khed on Bhima river to Wagangira suddenly. What was his motivation to turn to Wagangira?