Yadgiri fort is one of the largest forts of Karnataka. The fort is built over a massive monolith measuring about 850m long, 500m wide and 100m high. Yadgiri was known as Yetagiri. It was ruled by the Kalyana Chalukyas, Yadavas, Cholas, Bahmani Sultans, Adil Shahis and the Nizams. According to sources, five inscriptions of various time periods have been found in this fort. As per the inscription situated close to the fort entrance, Yadgiri fort was built by a person named Jagannath from Sagar a village in Shahpur taluq. This fort was originally built by Kalyana Chalukyas. Later It was strengthened by Yadava rulers and expanded under Muslim rulers.

In terms of size and strength, Yadgiri fort can be compared to Madhugiri, Chitradurga, Bellary, and Shahpur forts. All these forts are built over rocky hills and have multiple levels.

December 24, 2012
We left Raichur when it was still dark, passed by RTPS, crossed Krishna river and turned left towards Yadgiri. The road was more or less flat and almost deserted. It was around 7-30 when Yadgiri fort came into view. A auto rickshaw driver sent us in the wrong direction.. anyway, thank to him we could capture this view in early morning light. 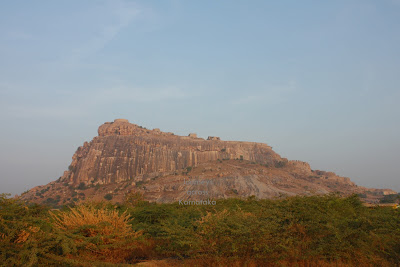 The very look of the fort set us thinking how much time was required to cover every part... at least 3 hours.

Yadgiri town has grown around the northern corner of the hill that's where the fort entrance is situated. This is the Mahadwara. 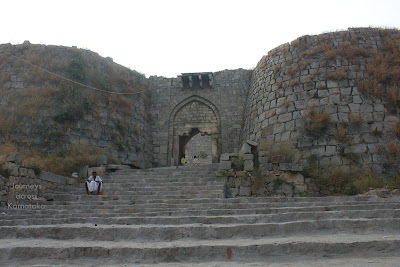 Beyond the Mahadwara are a series of gateways including this curved entrance shown below. That's Ravi speaking to a local person. Mohan mama is ahead, past this gateway and Malatesh laggin behind. 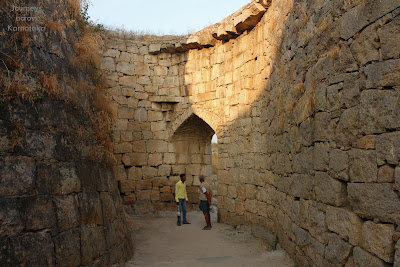 This is the innermost gateway of the security complex. Some where around here I saw a chisel jammed into a hole (see inset). 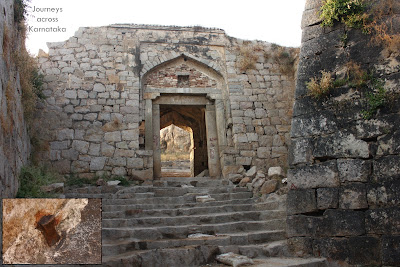 Unfortunately the fort entrance is not so clean. Err.. it s a busy place in the mornings. Anyway, we have learned to ignore certain things which happen in our historical monuments.

Once past the security complex, there are two ways to take- left or right. We chose to go right.. along a long path going up hill with towering walls to our left and deep stone lined water tanks to the right. We could hear 'Om Namah Shivaya' chant flowing out from a loudspeaker in one of the temples in the town below. It was nice to hear Shiva Mantra while climbing. 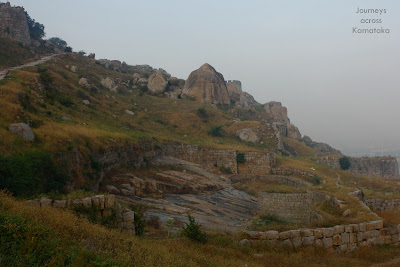 I stopped here to get a good view of the security complex and Yadgri lake in the background. Yadgiri had plenty of resources for fresh water, within and outside the fort. 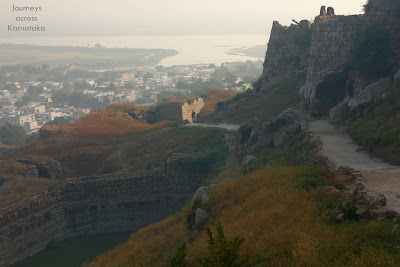 This is the north-west corner of the hill. Located on the edge of this plateau are 2 or 3 turrets. One of the turrets with a cannon, it has a Arabi or Persian inscription at the tail-end. In the vicinity are several cannons lying about. Also there's a big rectangular structure which might have been soldiers barracks. With the turrets behind me, I'm looking towards the hill center; the white patch on the hill is Bhavani temple. Slightly to the right is a deep pit, one of the many water tanks here.
\ 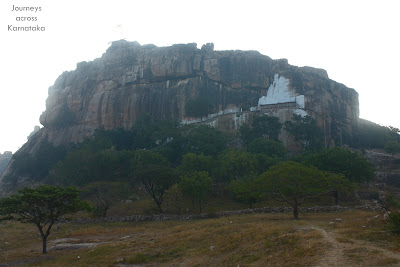 Little more to the right is this structure- a security complex. I climb up to the highest point marked by the saffron flag. 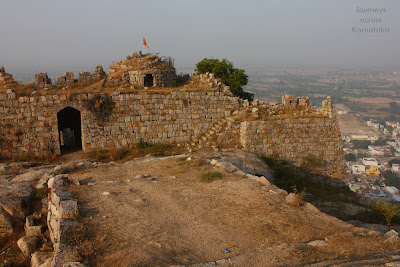 Down below is a pair of massive bastions connected by rampart walls with a small passage in it. That is the western entrance to this fort. This surely is a well guarded fort. 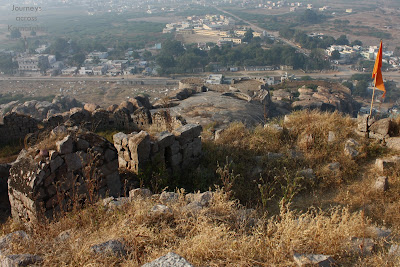 I guessed there must be a way to the top along the eastern face of this hill. My companions were down below, I signaled them to join me up here. 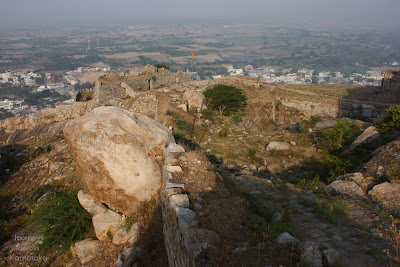 On this side of the hill we could see two rings of walls clearly. Each of the rings had several solid looking bastions. Yadgiri fort is no ordinary fort. Looks like there was a small town within these walls. 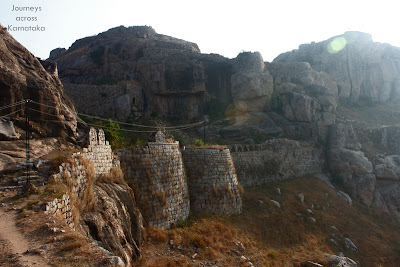 In below picture, top left corner is a turret with a small cannon on it. At the bottom of the picture are several granite slabs covering a canal. The canal's purpose is to divert water flowing down from the hill to the pit below. Builder of those days knew how to utilize what nature provided. Such detailed architectural planning indicates the strategic importance of this fort. 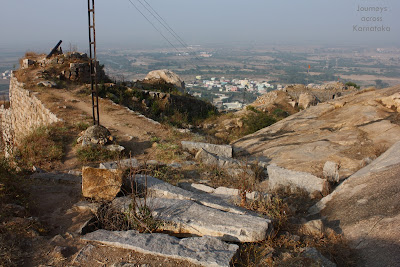 Mohan mama was skeptical about the way to reach the top. I asked them to wait until I checked. I went up higher, saw a gateway but it was blocked by rubble, also the approach was pretty steep. There has to be a way up there.. such big fort cannot have a deadend like this. I turned back to check the view below; Malatesh is now at the turret, Ravi and Mohan mama some where behind the walls. 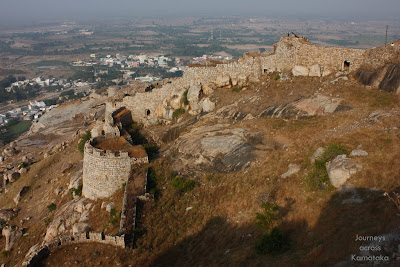 A little further there was a getaway (inset) and a passage in the wall. I could see A peek at the doorway blue sky was visible through it. Yes! This is the way to the top of the fort. 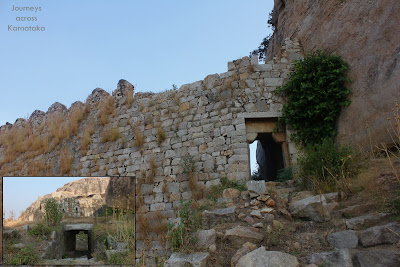 We regrouped here. I guess these stepped wells must be Akka-Tangi Bavi ~ sister wells. To our right is the flag bastion, the highest point of fort Yadgiri. 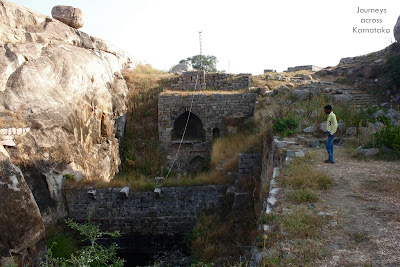 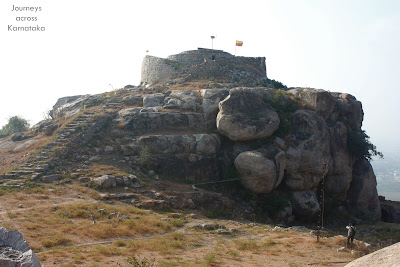 There seems to be a small cave like shelter in these rocks but we did not bother to explore. It is believed that one of the Jain munis lived here practicing penance. We decide to the explore what's behind and then climb to the summit.

This is the northern face of the hill, security complex below, Yadgiri town and lake. With the wind blowing steadily we did not feel the heat. 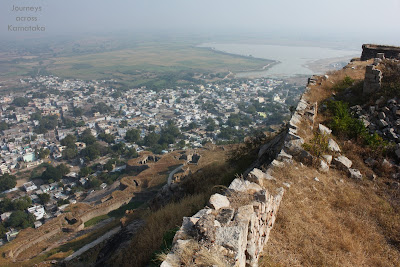 Another turret with a cannon. This fort has at least a dozen cannons of various sizes. In that wall is a small passage- short cut to the gateway below. 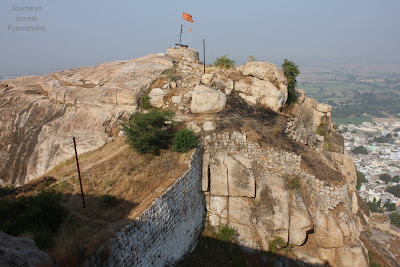 This 10' cannon with a 5" bore is poised to blast enemies attempting to attack from north/north-west. I remember seeing similar cannons at Bijapur. Right below this turret is Bhavani temple. 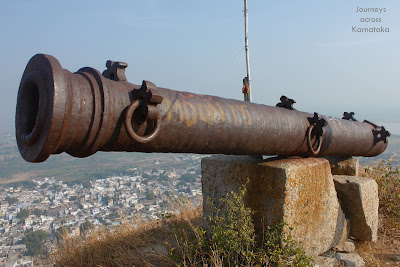 We head back towards the flag bastion. Yadgiri Gudda is a twin-peak hill. This is the valley between the two peaks. 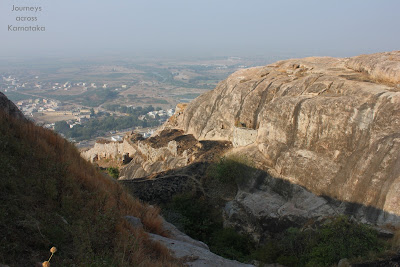 We stop by to inspect couple of underground structures which might have been used to store food grains or ammunition for cannons. 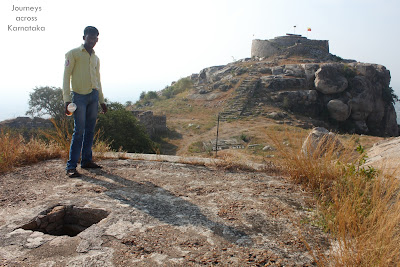 kindly correct. Bore dia of the cannon. it is given as 5 ft. it has to be. Five inches

Dr. Prabhakar, thanks for the comment. Error has been corrected.