Our journey for the day starts at Raichur. First stop was at Kavital to see Trymbakeshwara Gudi. Second stop was Samrat Ashoka's rock edict at Maski. Next was Mudgal fort. It was 11AM when we arrived on the outskirts.. the fort was visible with still 2 kms to go.

As we entered the town we were surprised.. the fort was built both on plain land and a hill. That's the eastern entrance of Mudgal fort. On our left is the moat and the hill. On the right was a patch of area which might have been part of the moat. 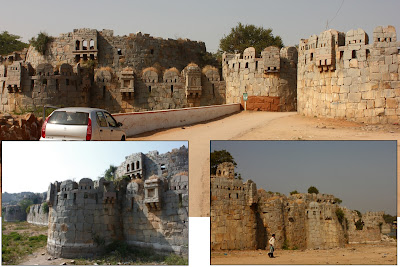 This is the plan of Mudgal fort; northern part is on plain land and the southern part is built on a granite hillock with a deep ravine running along the south-eastern edge. We started our tour at point A. 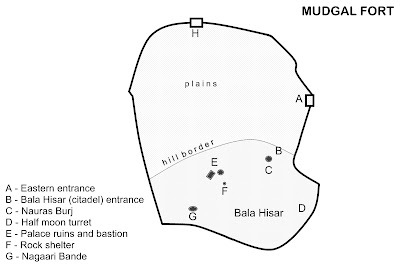 Entry to the fort is secured by a complex gateway with a zigzag path. That's the first gate; Malatesh is inspecting the wooden door with iron spikes which are somehow preserved so well. We could also see couple of iron chains fixed into the door-frame (see inset). 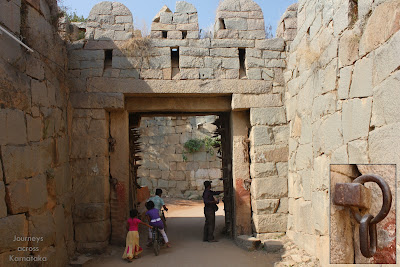 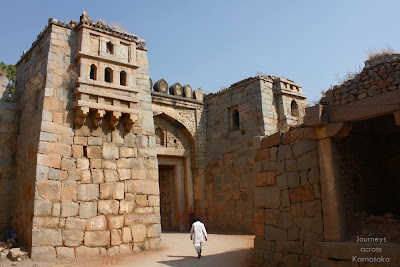 Unlike other forts Mudgal fort's gateway welcomes visitors in style. With richly decorated columns and arches the gateway feels like a temple. Sadly the gateway is in a bad condition, the platform floors are covered in a thick layer of dirt. This gateway houses at least two inscriptions; the slab leaning on the column has one. 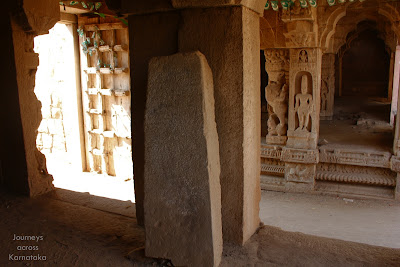 The second inscription; text seems Kannada is accompanied by Vishnu's Shanka and Chakra. The inscription slab is a part of the wall between two columns. 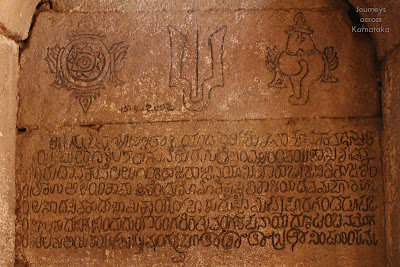 We are still in the gateway, once you pass the arch you are inside the fort. 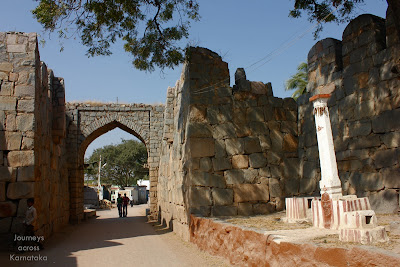 Looking back towards the arch. This seems to be added by Muslim kings. 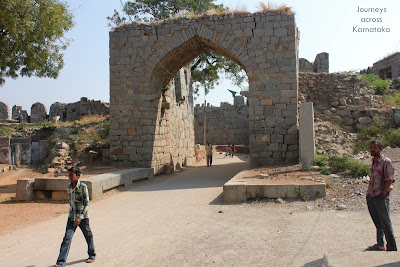 Some where near the inscriptions Malatesh had befriended a local boy- Shah Rukh -who agreed to show us the fort. We decided to explore hill part of the fort. We took our cab as close as possible and parked in the government school compound. Shah Rukh's friend Veeresh joined our group; now we were six of us. From there it was a short walk to the base of the hill, it was a steep climb to the entrance. The high rise walls to the right forms the tower called as Nauras Burj. 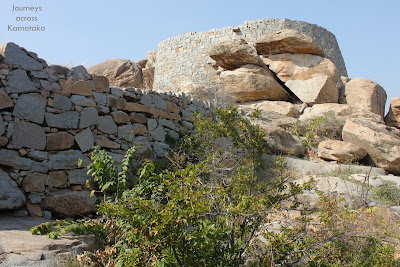 At this point I would to quote a para about Mudgal fort from Raichur district website:
The Bala Hisar or citadel is built at the top of the hillock and commands a good view of the interior of the fort as well as of the surround country. The view gives a good idea of the extent of the fort and of the large garrison, which could be accommodated therein. There are several natural depressions in the rock above, which were utilized for storing water. Bastions and walls are built at different points for the defence of the buildings of the Bala Hisar. In the middle also, there is a large bastion, round in form. The hill near this bastion rises in the form of a spur and is detached from the lower parts of the hill by a ravine. There are some natural caverns below the Nauras Burj. The fort is defended towards the south-west by a range of hills. In the western part of the fort is a large cistern called the Hikrani Baoli – about 140 yards in length and 40 to 50 yards in breadth.

Now we are in the citadel ~ Bala Hisar, very close to Nauras Burj. Burj means tower. The tower is built over a random stack of boulders. Notice the large circular shallow pit? We have no clue about the purpose of that pit.

The entrance to the tower is a 4' gap between two massive boulders, a flight of steps have been built through it. The tower top is a flat area and a small platform at the center which elevates another 20'. Truly the tower offers a commanding view of the fort and the surrounding areas. View to the east: In the center of this picture, where the wall ends at a boulder- that's where we climbed the wall to enter the citadel. This wall is a partition between the northern and southern halves of this fort. 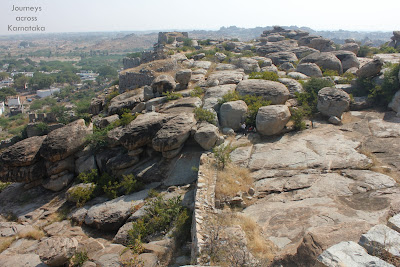 View to the west: In the top-left of the picture is a large bastion and ruins of a palace. 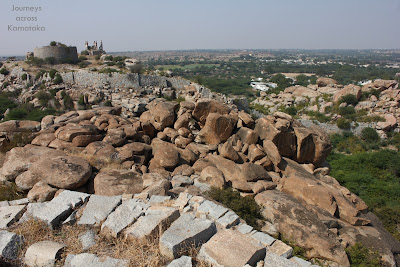 Between the ruins and the rock formation (in the middle) is a ravine.which goes down all the way to the base of this hill. I felt this ravine might have been a prehistoric settlement. 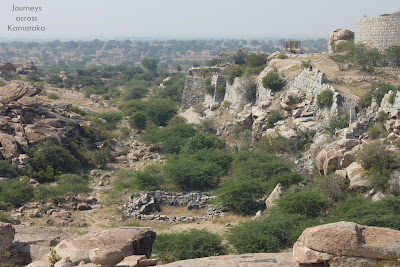 The natural gateway of Nauras Burj. 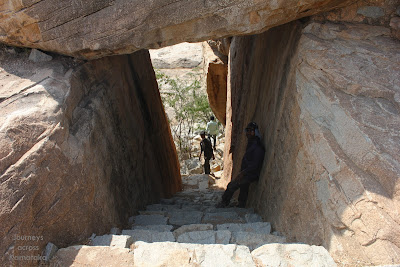 Malatesh imitates a king seated on his throne. 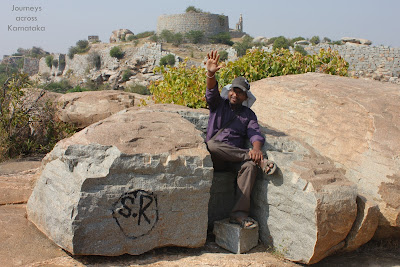 We move to the eastern side of the fort. We pass by several interesting rock formations. Rocks here have a unique texture, short parallel lines cover the surface. Veeresh said that Mudgal granite is very expensive. In fact I remember seeing few quarries close to the town.

Part of the rampart walls climbing the eastern slope of the hill.Part of Mudgal town is within the fort walls. The eastern and northern walls are protected by a moat. 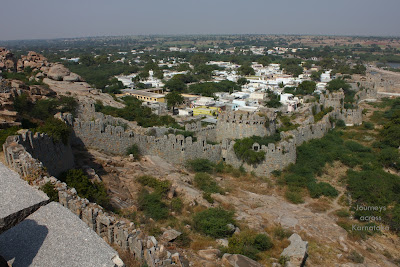 The wall runs along the edge of the plateau. Ahead of us is a huge turret... 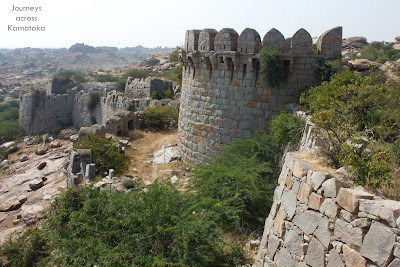 ..semi-circular in plan. I named it half moon turret. Surely it looks like a command post.
The article will continue in the next post - Mudgal fort - part 2.