Gavimath or Gavisiddeshwara Matha is on the outskirts of Koppal. The hooded rock sits atop a rocky hillock just behind Gavimath. 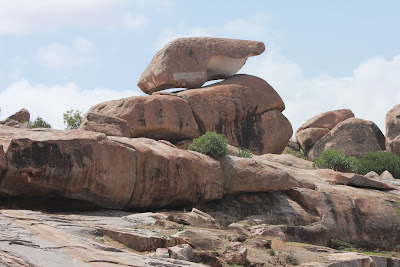 This board is fixed close to the street- The Ashokan Edict of Gavimath. 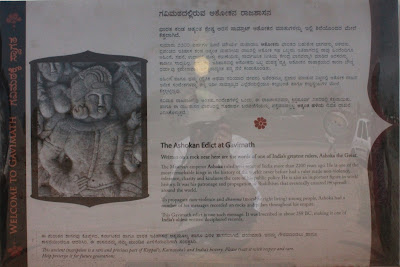 Written on a rock here are the words of one of India's greatest rulers, Ashoka the Great.

The Mauryan emperor Ashoka ruled over most of India more than 2200 years ago. He is one of the most remarkable kings in the history of the world: never before had a ruler made non-violence, tolerance, charity and kindness the core of his public policy. He is also an important figure in world history. It was his patronage and propagation of Buddhism that eventually ensured its spread around the world.

Ashoka became an apostle of peace after he won a war in Kalinga (modern Orissa). Filled with remorse over the slaughter and suffering of war, Ahoka turned non-vilent and decided to propagate Dhamma (meaning 'little evil , and much good') among people. To do this he has a number of his messages recorded on rocks and pillars throughout his empire.

The Gavimath edict is one such message. It was inscribed in about 258 BC, making it one of India's oldest written deciphered records. Like at Gavimath, the Ashokan edict at Palkigundu is also inscribed on a boulder that has a rock canopy above it.

Ashoka had several copies of each edict made. So far, versions of the Gavimath inscription - called Minor Rock Edict 1 - are found in 17 other places, including in Palkigundu, including in Palki Gundu, just 3.5km away, and in Rajasthan and Madhya Pradesh, more than 1600km away.

Scribes in the Mauryan capital, Patalipura (modern Patna), recorded the Emperor's words and then on rocks and pillars through out the empire. Early edicts - called the Minor and Major Rock Edicts - were recorded on conviniently placed rocks. Later proclamations - the Pillar Edicts - were inscribed on polished stone pillars.

The locations of Ashoka's edicts give us an idea of the extent of Mauryan influence Karnataka is particularly rich in Ashokan inscription. Nine sites in the state have Ashokan edicts.

The nine sites are-

After deliberating we decided the inscription must be under the rock shelter. Let's go up. 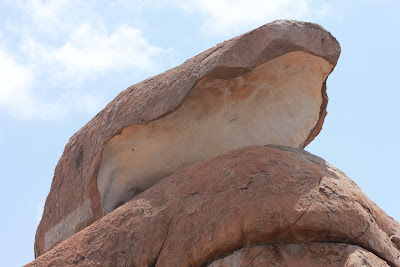 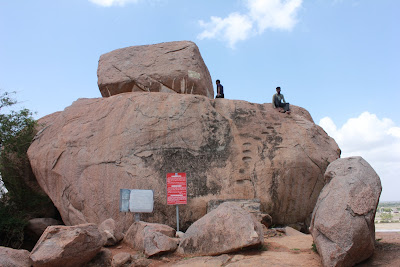 Since I had company I did not worry much. We shed our foot wear and up we went except for Mehboob, he went to check another rock 100 meters away. 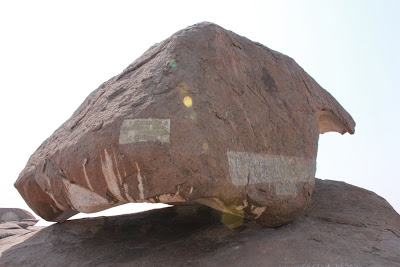 I asked Shivya to check for inscriptions. The kid was dumb at times, he would point at natural texture lines and say he found it. I told him look carefully, it would be spread on a area much larger than your palm. Look at him examining the painted surface for text! Ravi was peacefully enjoying the cool shade. 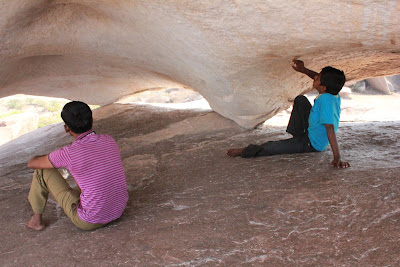 A pair of feet engraved on the floor. With this I was confident the inscription is close by. 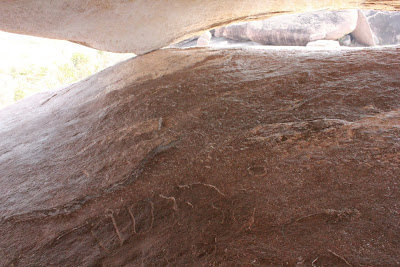 Done with checking in the shelter, I thought of checking the outside. Yes! There it is. Thank the person who marked the engraving with chalk. I was happy we found it. Shivu was almost gawking at the letters ...he must be a real bad student. 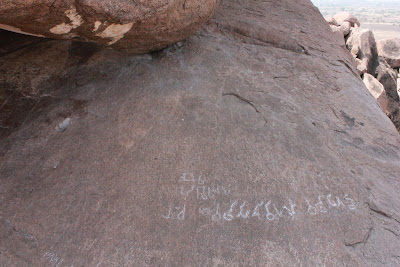 A closer look at the inscription. I touch the engraving with my fingers ...Ashoka's message for peace. 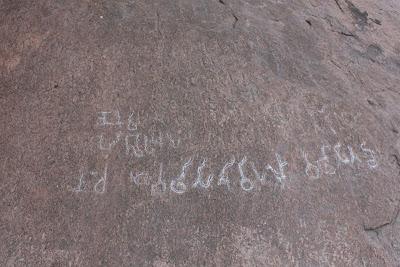 Two short videos of the hooded rock and the inscription.

As imagined, getting down the steps was tricky with my palms and feet sweating like crazy. Mehboob helped me by lending a hand.

As seen from the other side. 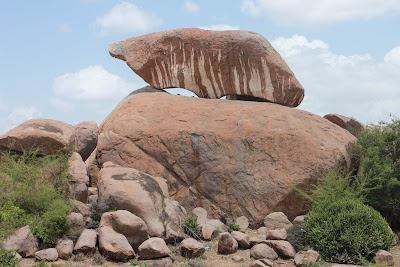 Back in the car Shivya and Mehboob were arguing a great deal if this road linked to the road to Bahadhur Banda. Ignoring them, Ravi and I inquired with couple of passersby- yes, go straight and check directions at a junction. So Shivya was right.