After Manvi fort, on the way to Raichur we decided to stop at Kallur. These hills are supposed to be prehistoric sites according to Raichur district website. 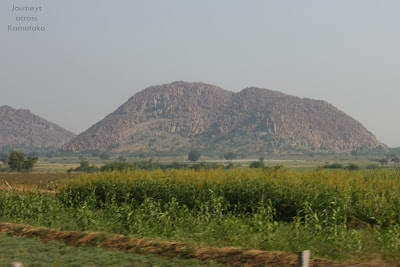 Kallur, in Manvi taluk, is a large village, about 13 miles from Raichur. The village is surrounded on all sides by granite hills except the east and derives its name from the abundance of the boulders on these hills. The village and the hills around are full of antiquities.

The present village, which is a modern growth, is surrounded by an old wall, which appears to be a work of the 13th or 14th century A.D. But the five gates appear to be of Muslim period. Two of them, which are not in much use, have no names. The other three are called after the towns to which they lead, Manvi Darwaza, Kalmala Darwaza and Raichur Darwaza. The gates are more or less in a ruined condition. The superstructure of the Raichur Darwaza, which has been pulled down to construct the chavadi in the village, contained a wooden inscription in Kannada. According to this inscription, which now forms part of the ceiling of the chavadi building, the gateway was constructed by Agha Khusru, a well known Adil Shahi dignitary.

There are six temples in and around the village. Out of these, only the Markandeshwara temple deserves some notice. This seems to be the oldest temple in the village and its hall has some pillars of black polished stone with beautiful carvings on them. A number of inscriptions have been found in this village, most of them belonging to the period of the Chalukyas of Kalyana.

Another interesting feature of Kallur is that there are many large and well-built wells. Five of these wells are very spacious, which have been built of solid masonry and have flights of steps leading to their base. It is not known when and by whom they were constructed. The largest well is 50 feet X 50 feet on the surface and about 120 feet deep and contains sweet water.

We navigated through the narrow streets of Kallur and reached Markandeshwar temple. From there Mahalaxmi temple is a minutes walk. It's a very small temple managed by a family. In fact the poojari's house is within the temple compound. We were allowed to photograph only the deity, the poojari asked us not to shoot pictures of the temple exterior. 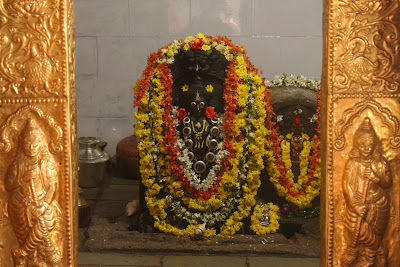 This is the gateway to Markandeshwara Gudi. 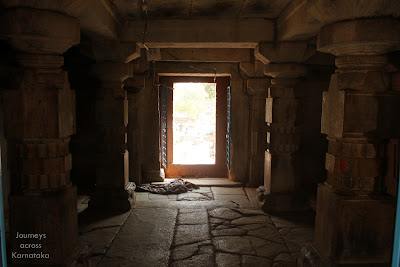 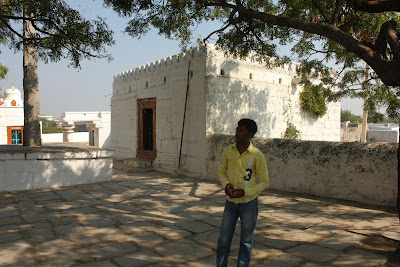 The temple is built on a raised platform, situated at the base of one the three hills of Kallur. 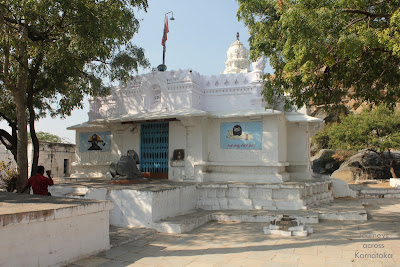 Basavanna lying down in front of his lord. 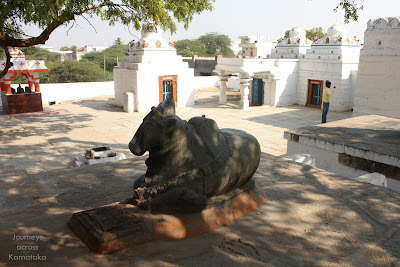 Besides the temple is a Ganapti and a group of serpent sculptures. 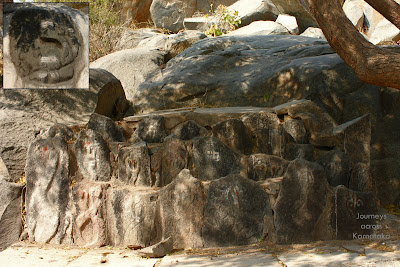 Unlike other ancient temples this temple is not entirely made of stone, its a stone structure covered by brick and mortar. The structure's top has four minarets, one at each of the corners. The minarets are Islamic style, the design can be seen at Bijapur, Gulburga and Bidar in buildings built during Adil Shahi and Bahamani times. The temple has a 20+' high monolith pillar. 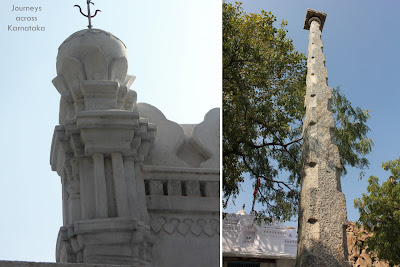 Outside the temple gateway is a small platform on which this Shiva Linga and Basavaan are installed. 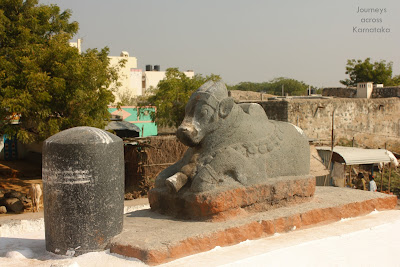 We did not try to explore the gates nor the wells mentioned earlier. I was eager to reach Maliabad fort now.