March 7, 2013
During the first visit here, my friend Rama Dasa from this village showed us ancient petroglyphs of Sanganakallu. Rama Dasa shared the knowledge about this hill which he's been exploring since childhood days. We saw hundreds of rock etchings depicting humans and animals such as bulls, horses, elephants, tigers, serpents and birds. I must mention the bull-axe wheel, a complex drawing consisting of 5 axes and 5 bulls. Rama Dasa said that every drawing had a meaning, they connected our world on this planet to the cosmic world. The 5 hour tour clambering up the dolerite dyke was a tiring exercise. By 1 PM it was too hot for comfort, we ended the tour.

December 22, 2013
The second visit. We- Mohan mama, Rama Dasa and I -arrived here quite early, it was winter solstice, an important day in astronomy. Rama Dasa had gone to a field behind this hill to mark the shadow of this hill's peak - he marks the position of the shadow every year to study its movement. With that observation Rama Dasa understands the relative position of Earth and Sun. In this picture below, the moon is positioned just above Peacock hill, few minutes after shooting this picture the moon sank behind the rocks. Being here on Winter Solstice Day was a coincidence, objective of this visit was to see the Neolithic tools factory atop this hill i.e. the summit between Peacock hill and Dolerite Dyke. 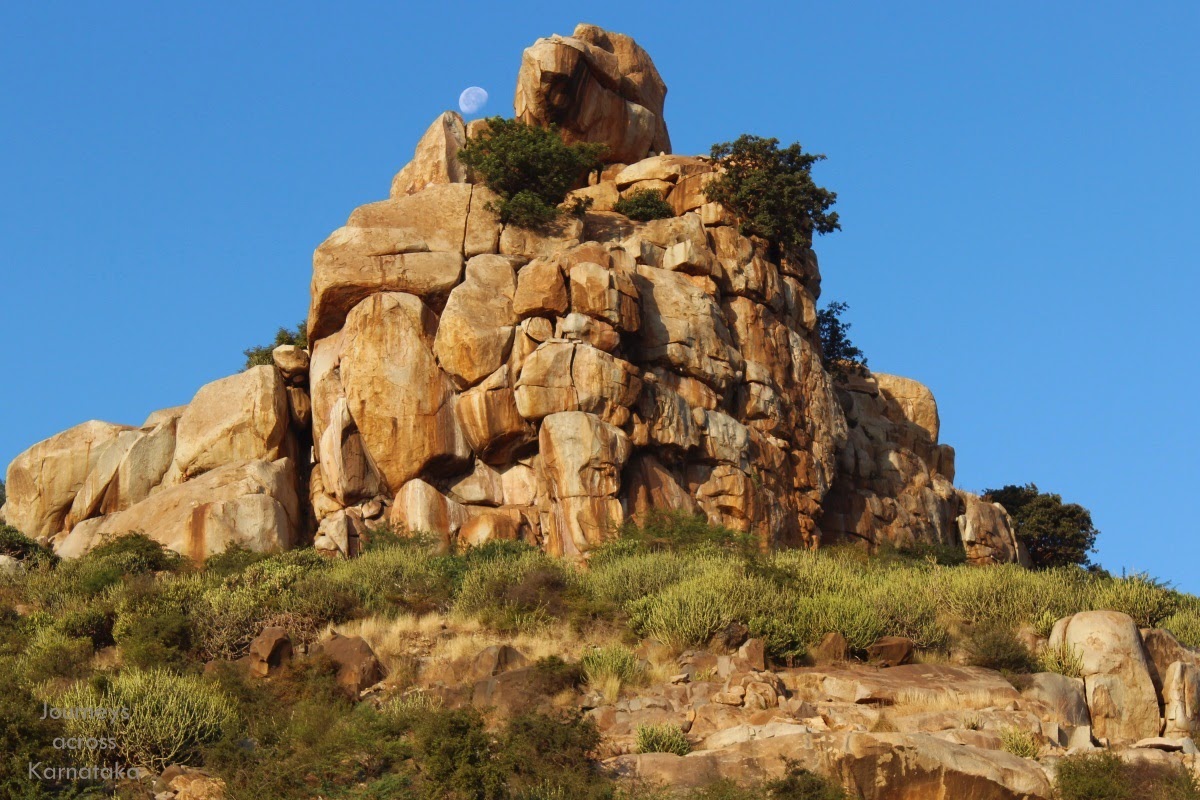 Rama Dasa was bare foot again! Last time he climbed the blistering rocks barefoot and this time he's walking over thorn littered surfaces. In the background is the top portion of the Dolerite dyke. The spot we are standing on is about 150' above the plains. This spot is supposed to be stone tools grinding place i.e. rough cut tools were polished to get the required cutting edges. 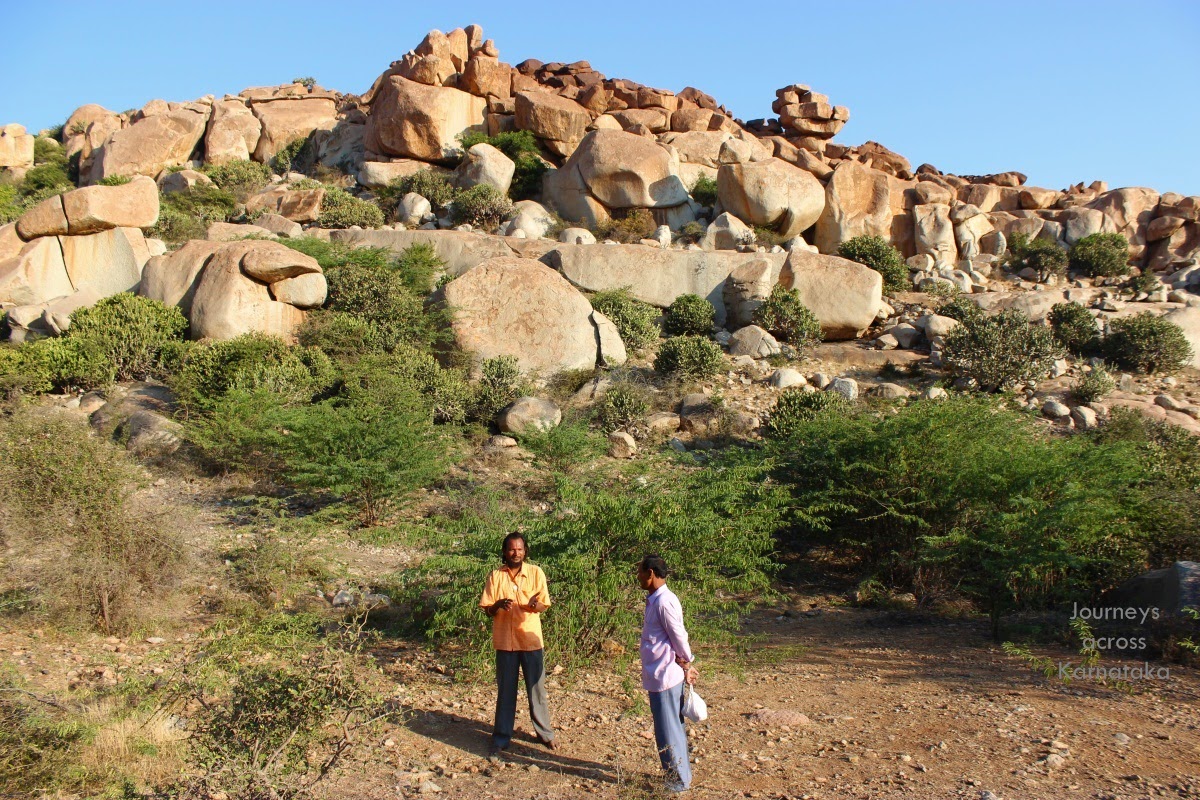 A small area of plain land between the the three peaks of Hiregudda. Ramadasa believes that a stone dam existed here to capture rain water. 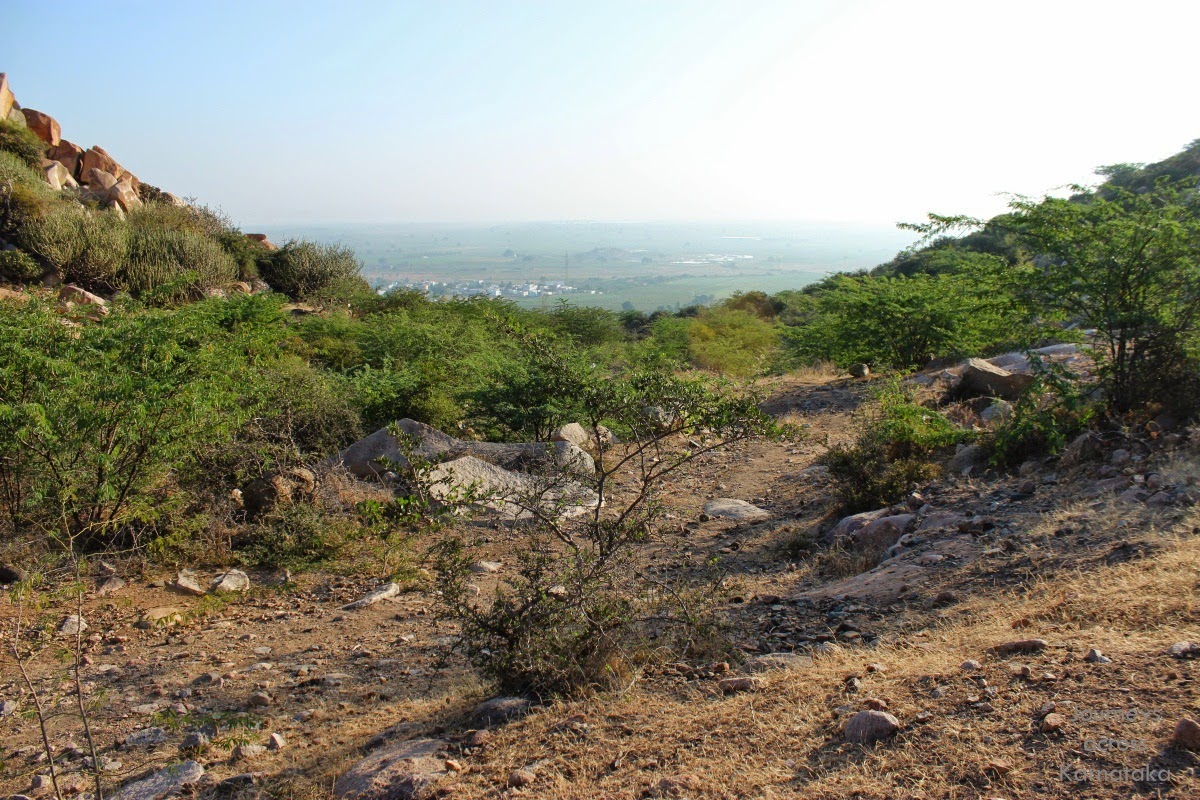 One of the flakes located by Rama Dasa. This piece of rock was created while manufacturing a stone tool - its a waste product back then but today its an important piece of evidence for that ancient activity. Only a trained eye can identify such stones. 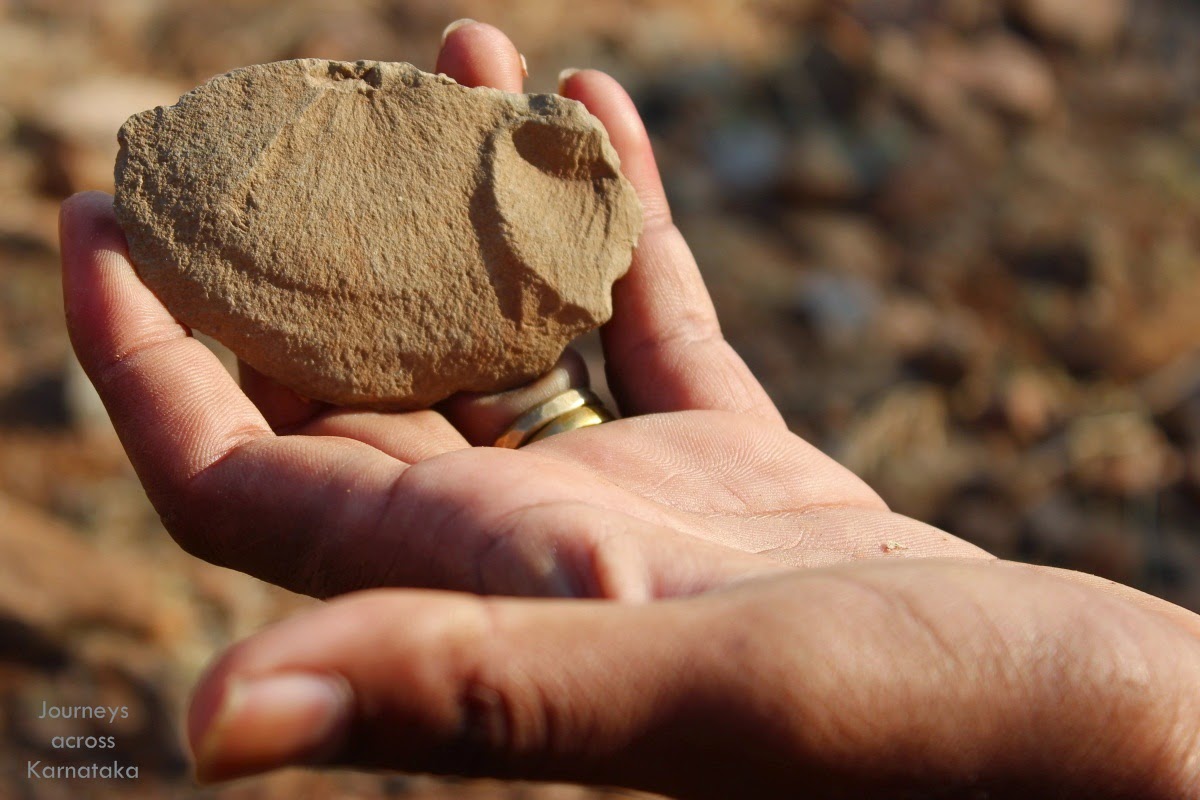 Mama listens to Rama Dasa's explanation of stone tools manufacturing activities here. Some years ago quarrying was active which disturbed prehistoric evidences to a great extent. In the background is one of the peaks with a partly damaged standing stone - thanks to quarrying work. 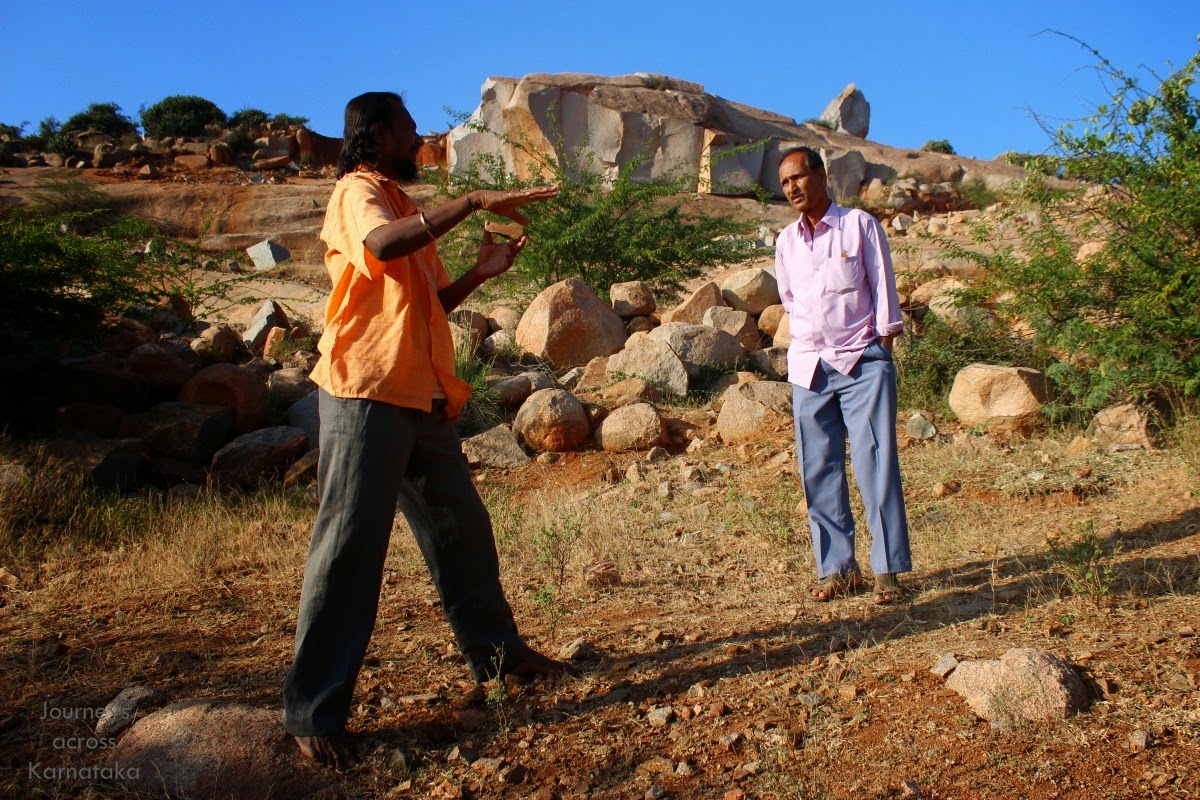 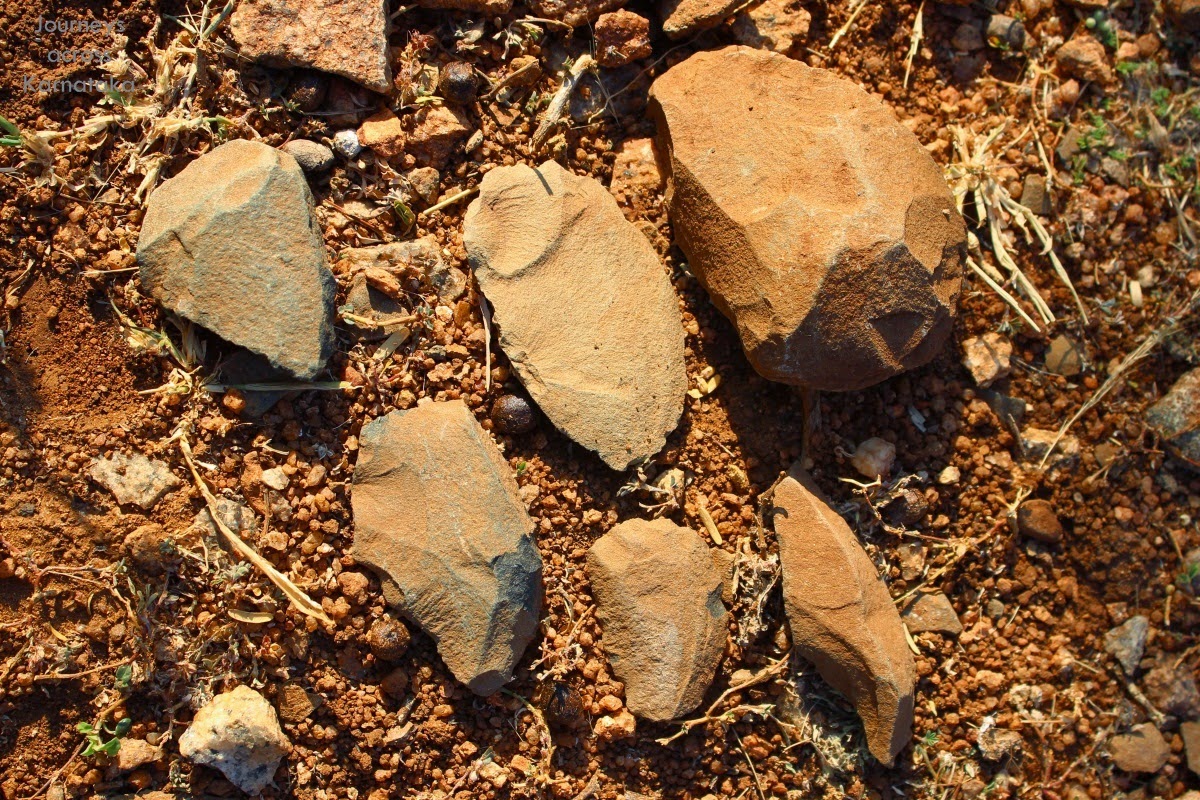 Close by I happened to see a large stone with a smooth concave surface, it looked manmade. This is an ancient grinding stone.. grains were ground into flour using a shaped stone with a gently curved surface which would fit into our palm. 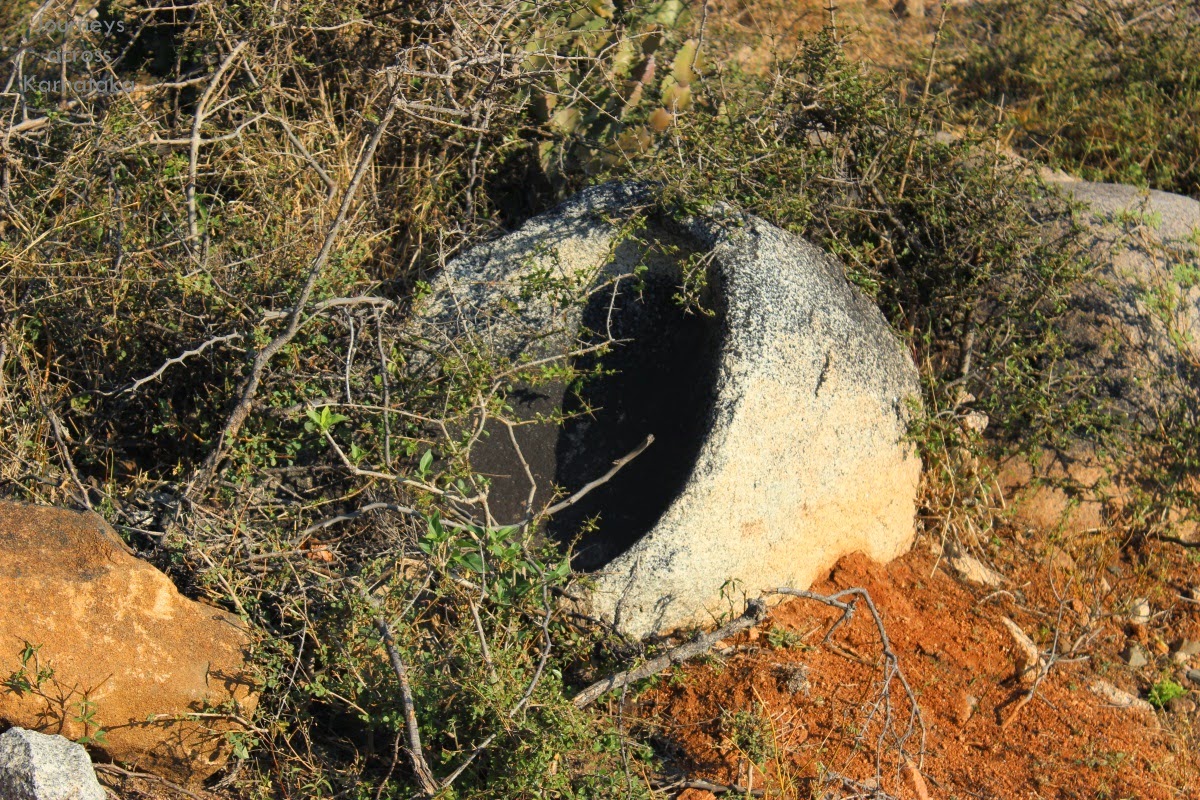 We cleared off the shrub trying to get a clearer view of the ancient grinding mill. In the act of cleaning we discovered the second grinding stone right besides the first one. This is evidence that neolithic people worked in groups.. because they lived in groups. 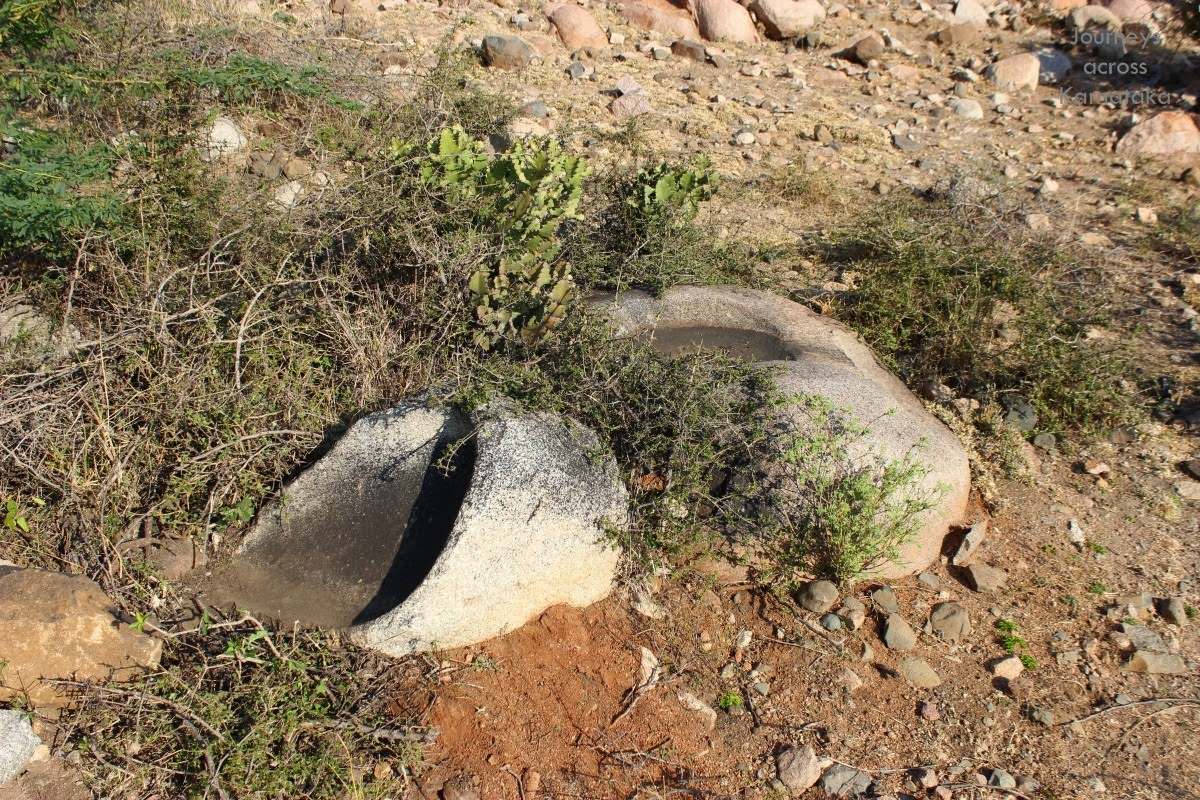 A short demo by Rama Dasa-


Rama Dasa demonstrates how a man would have worked the mill. In his hand is the grinding stone which would go round and round crushing grains in the pit. 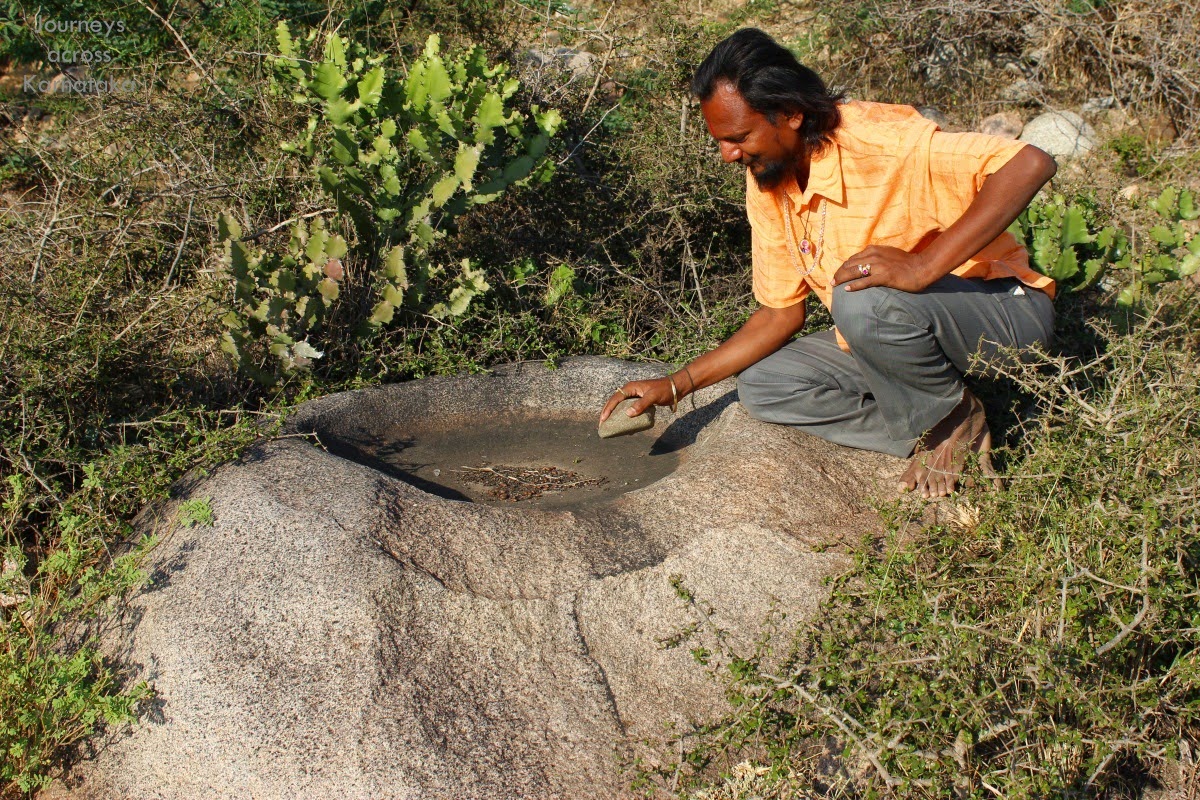 We located a third stone too, a much smaller though. Note how smooth the surface is yet it is rough enough to catch grains and crush them. 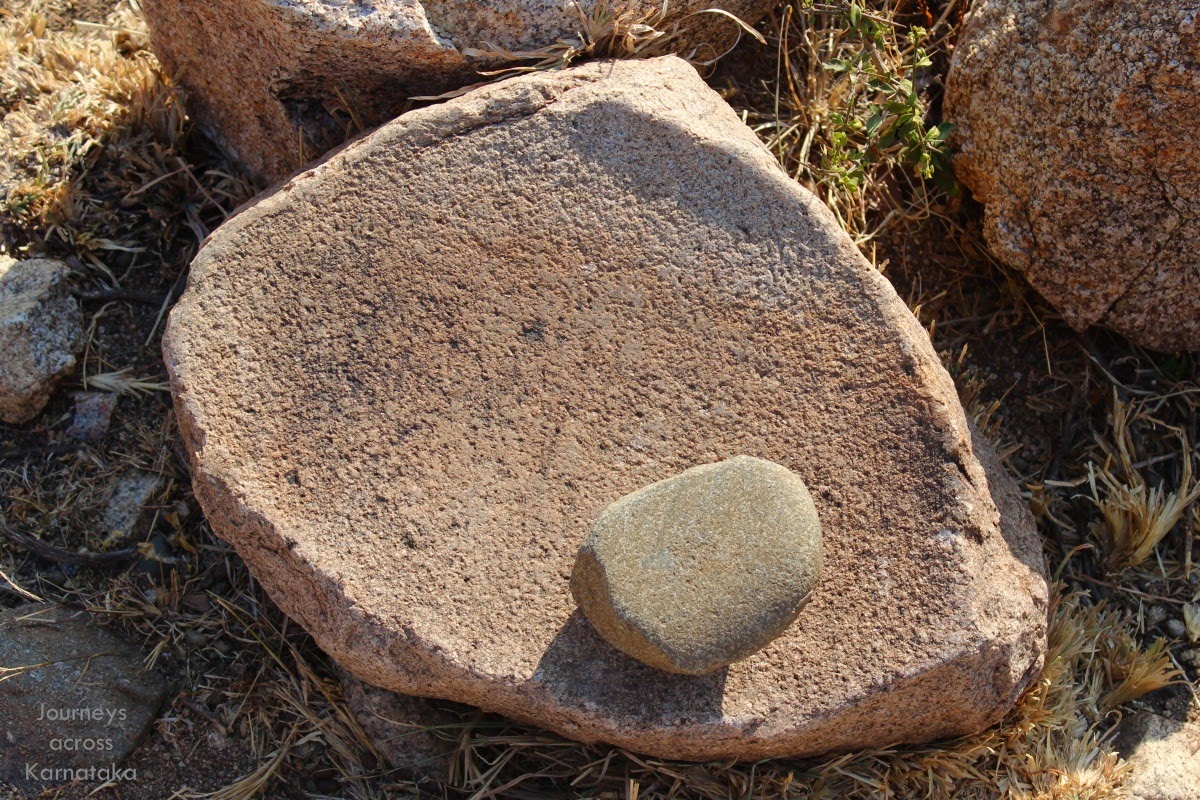 The grinding stone had multiple purposes, not only it was used to grind grains but it could also be used to sharpen tools. For instance this is a well formed stone axe but its unfinished. The edges would be rubbed patiently until they become smooth cutting edges. 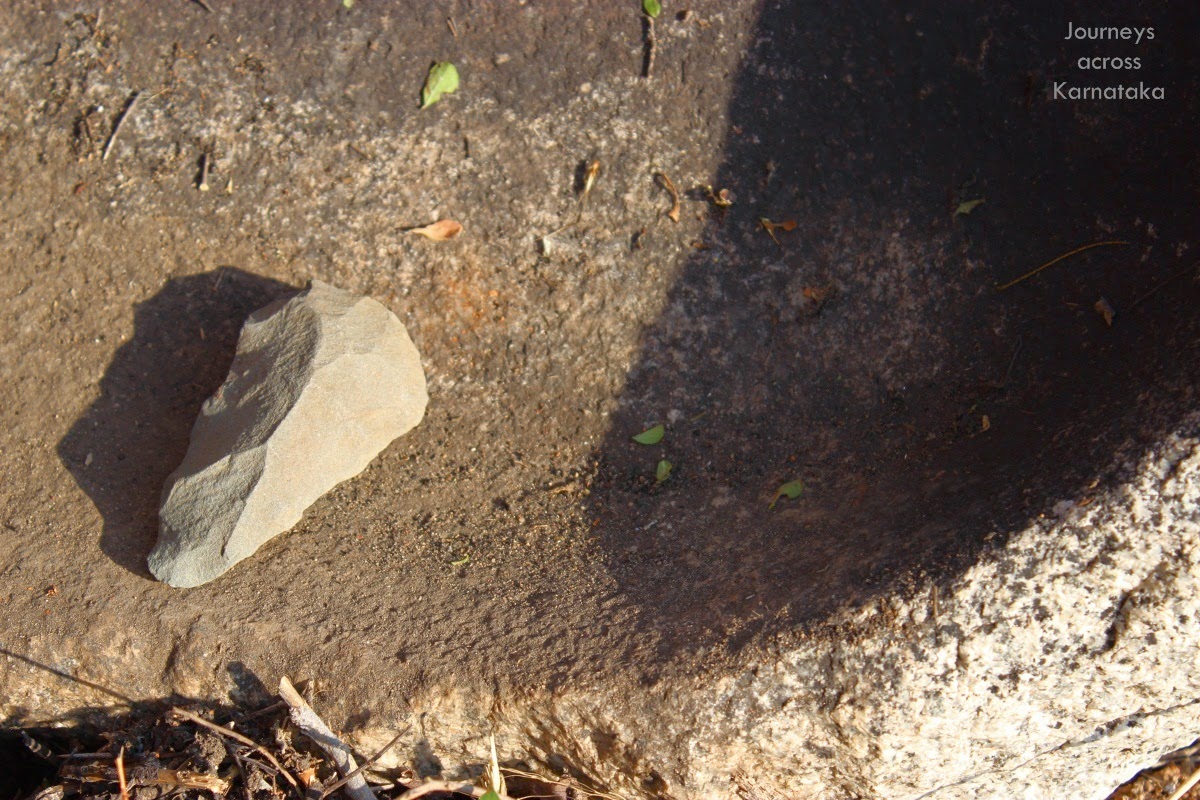 We climb little higher.. in search of raw material for manufacturing tools. We take a short break under jaali-gida shade; we have a breakfast of dry snacks and water. In this picture below, the white circle marks the location of an ancient stone dam. The wall created a small tank to capture rain water. 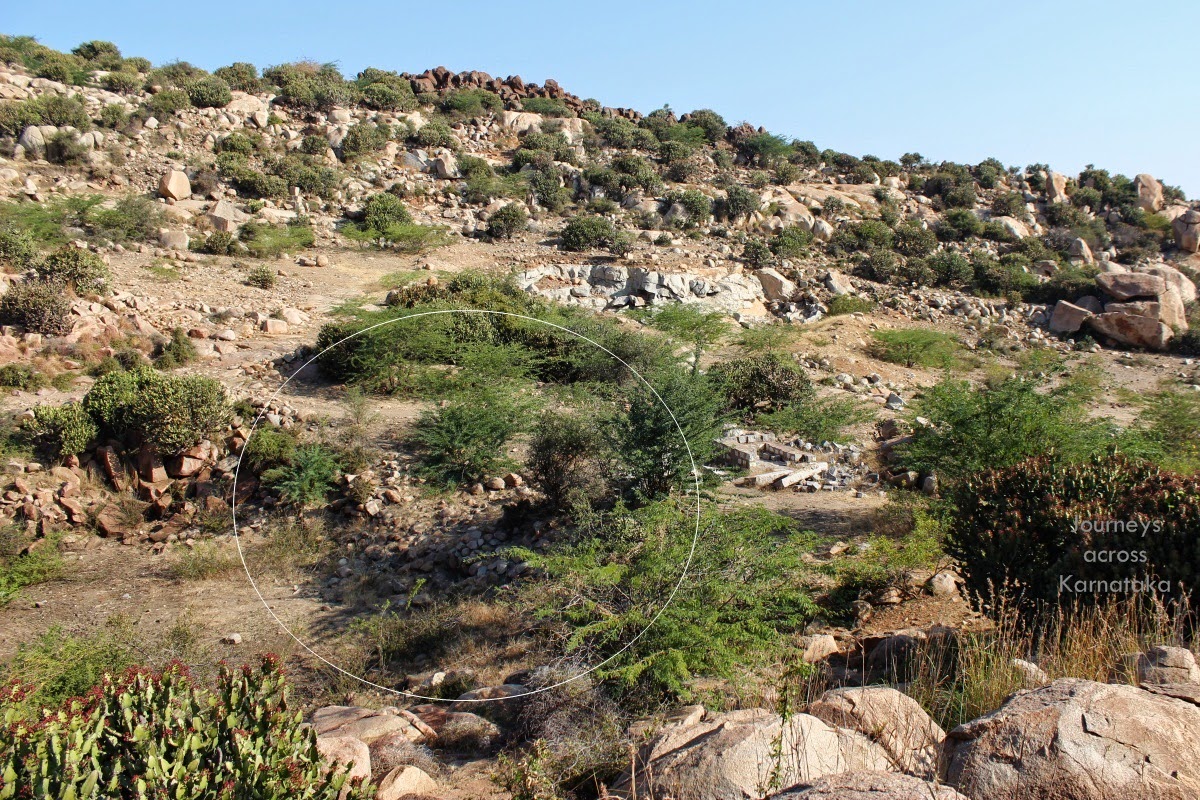 A wider look of the valley.. and the plains of Kappagallu village below. 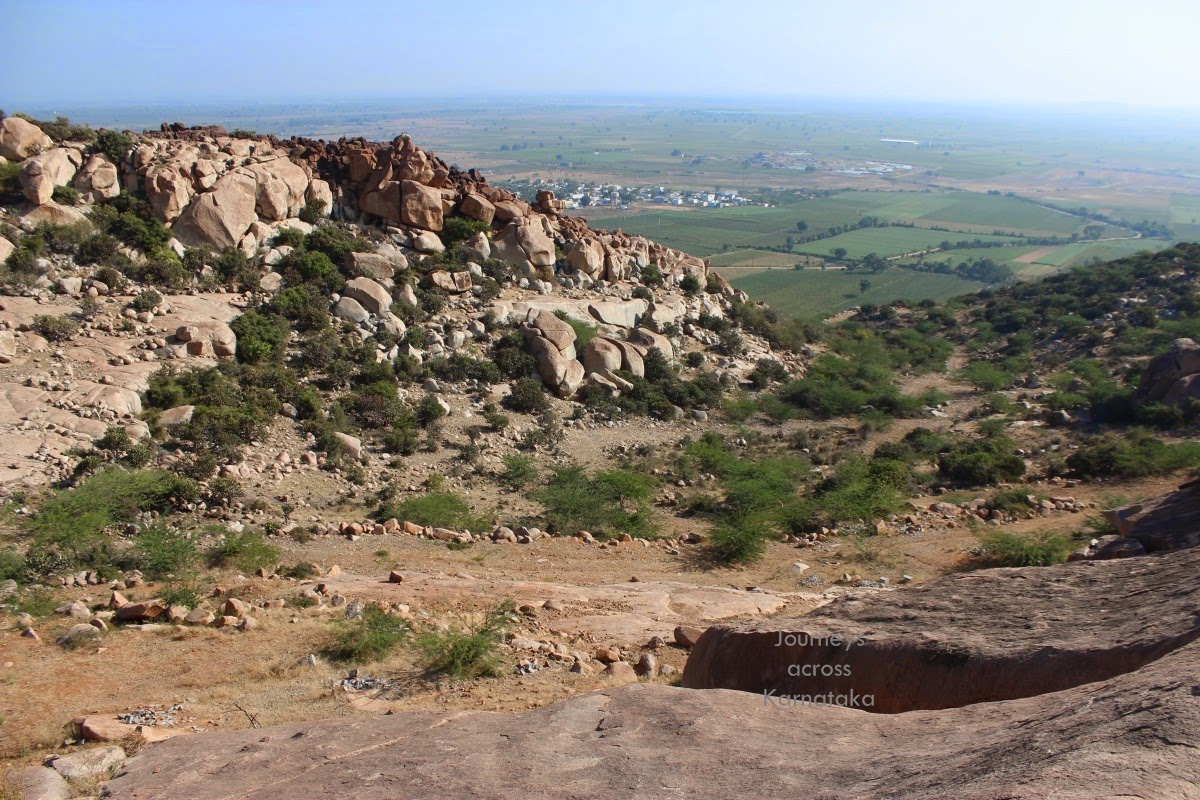 Mama and Rama Dasa inspecting one of the sources of raw material for stone implements. This rust colored stone is hard; well suited for making implements. I think its the effect of oxidation that has formed a rust colored coating on the originally dark brown stone. 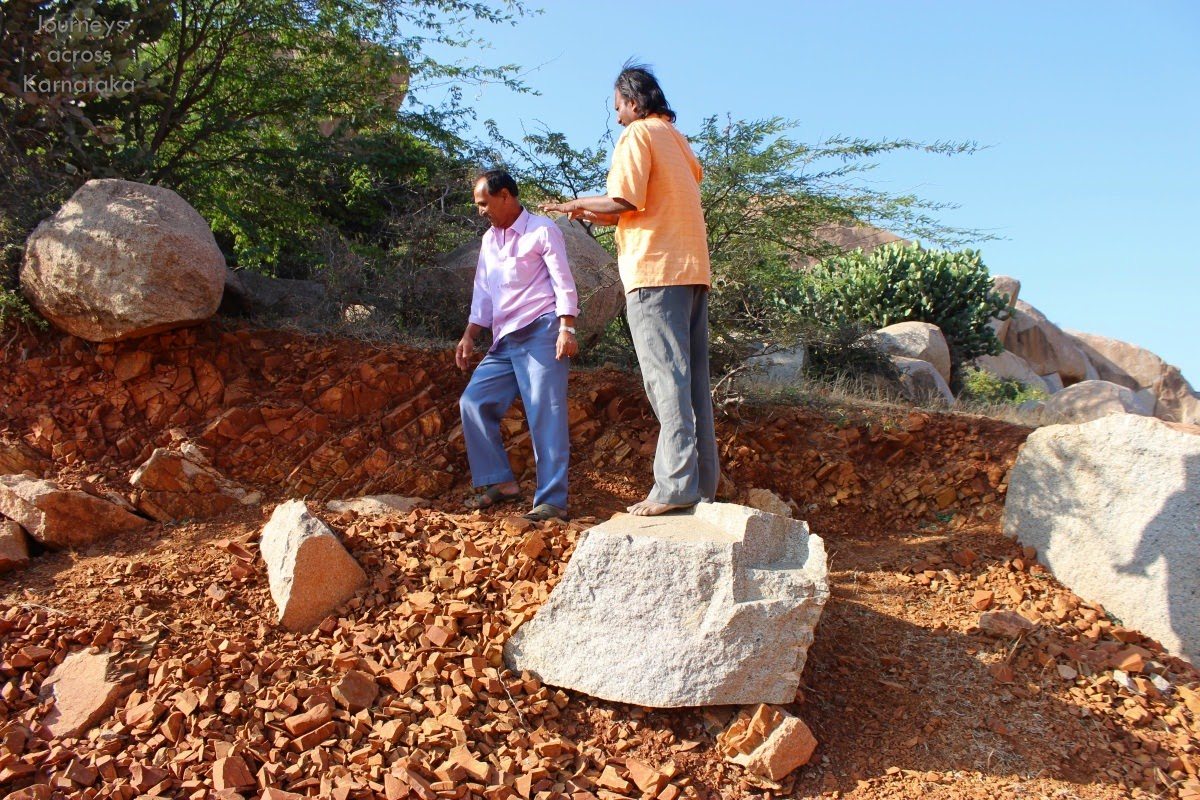 A closer look at the standing stone.. and the western valley on the hill. 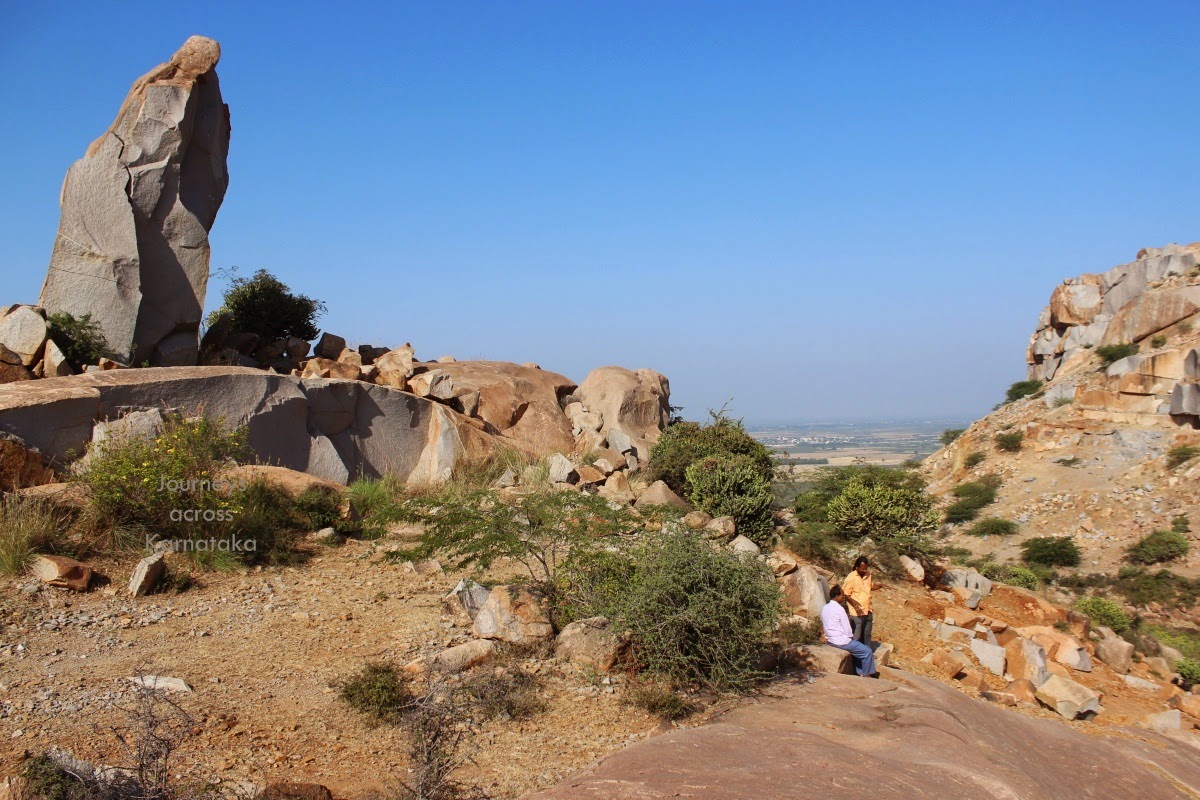 This is the second source of raw material for stone implements. These stones come in shades of grey, different compared to the brown stones. 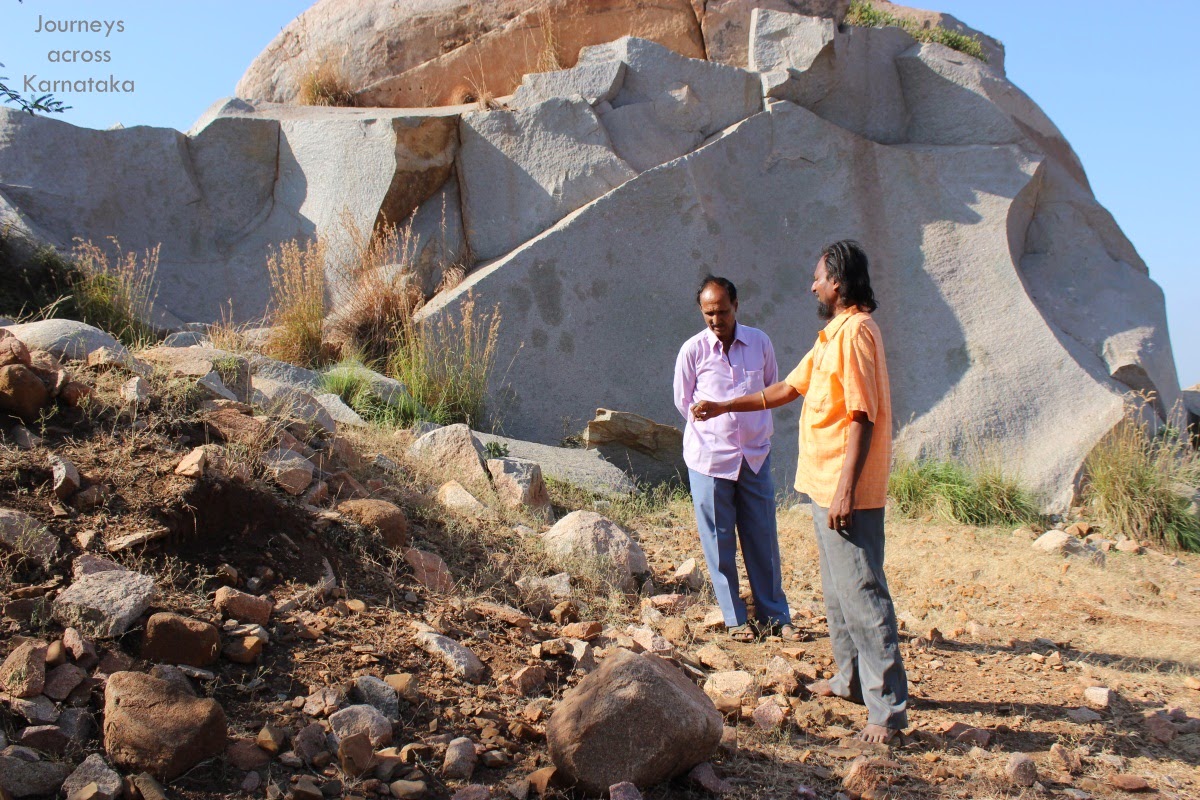 Close to the standing stone, standing over a rock bed, I was trying to cool off in the breeze. I noticed a row of circular shallow pits. The line pointed towards the Pitalappa shrine in the Dolerite dyke across the valley - Rama Dasa confirmed the alignment of the line. About 20' away there was another similar row of pits at a slightly different angle.. no idea what it pointed. 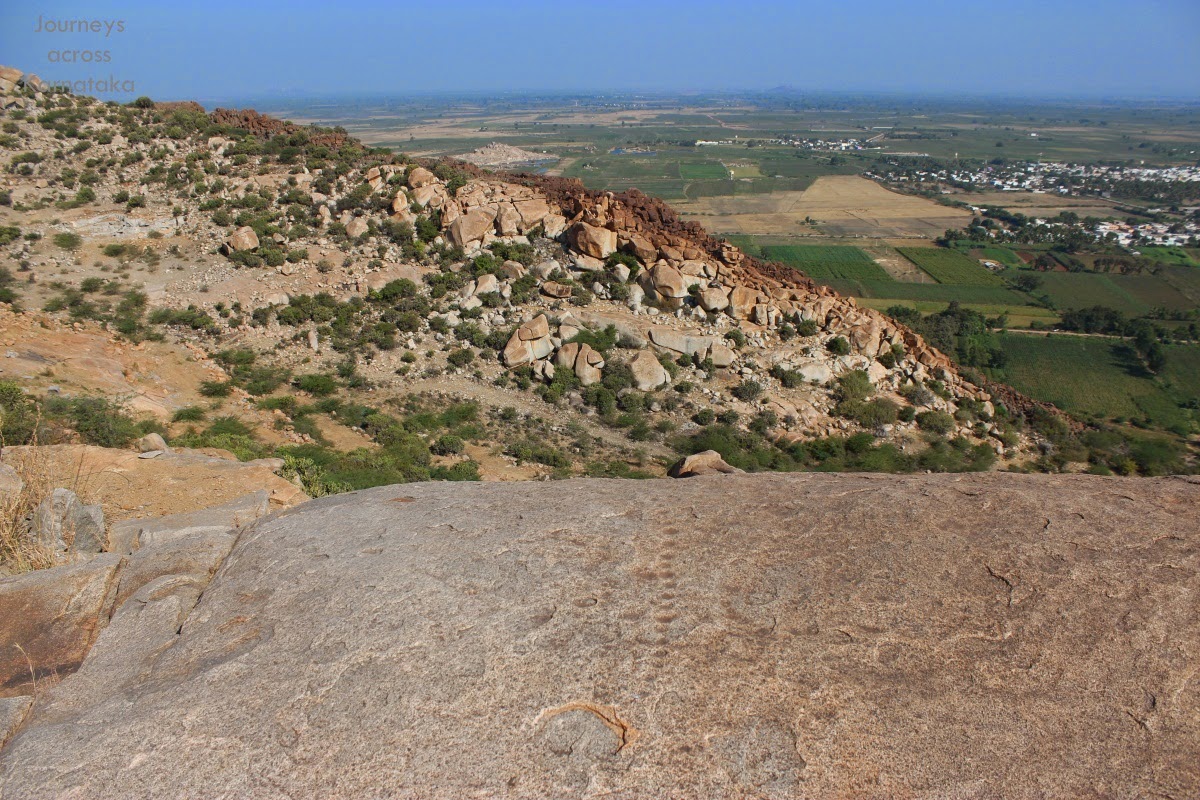 View of peacock hill from the standing stone... some day I want to explore that rock formation. Might find a rock painting or two there. 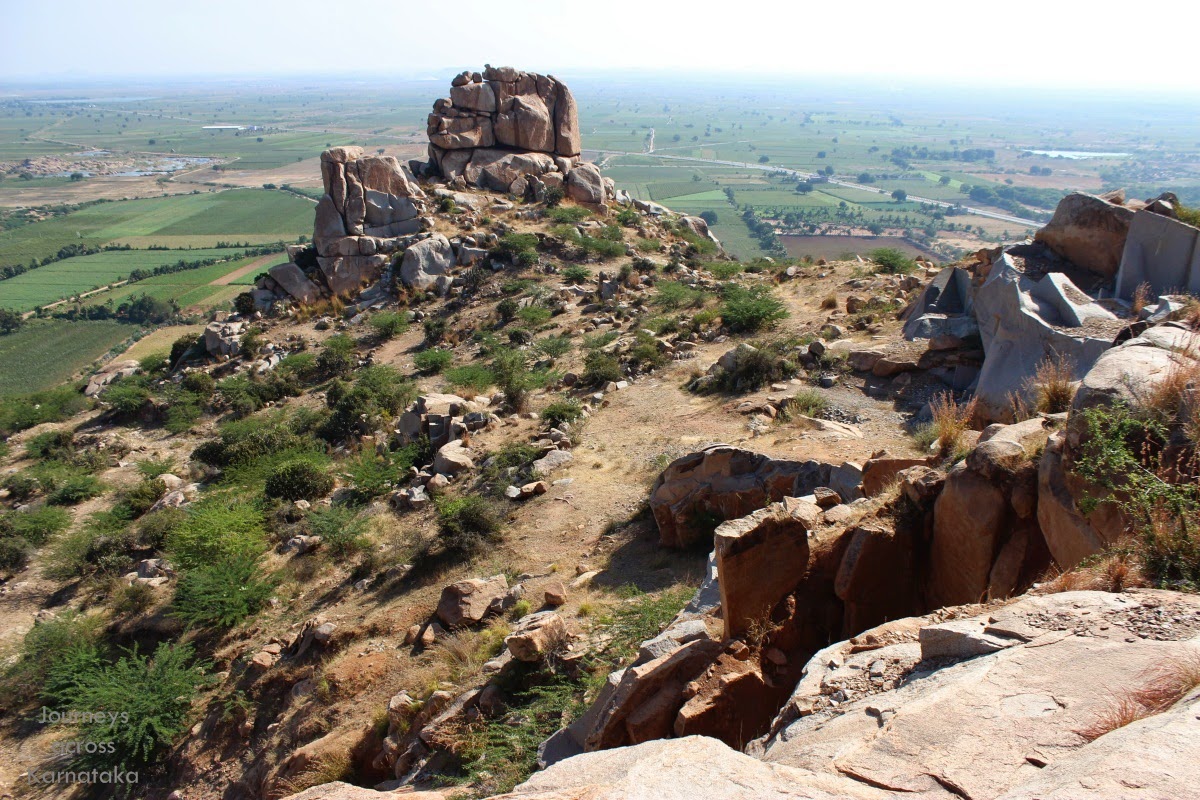 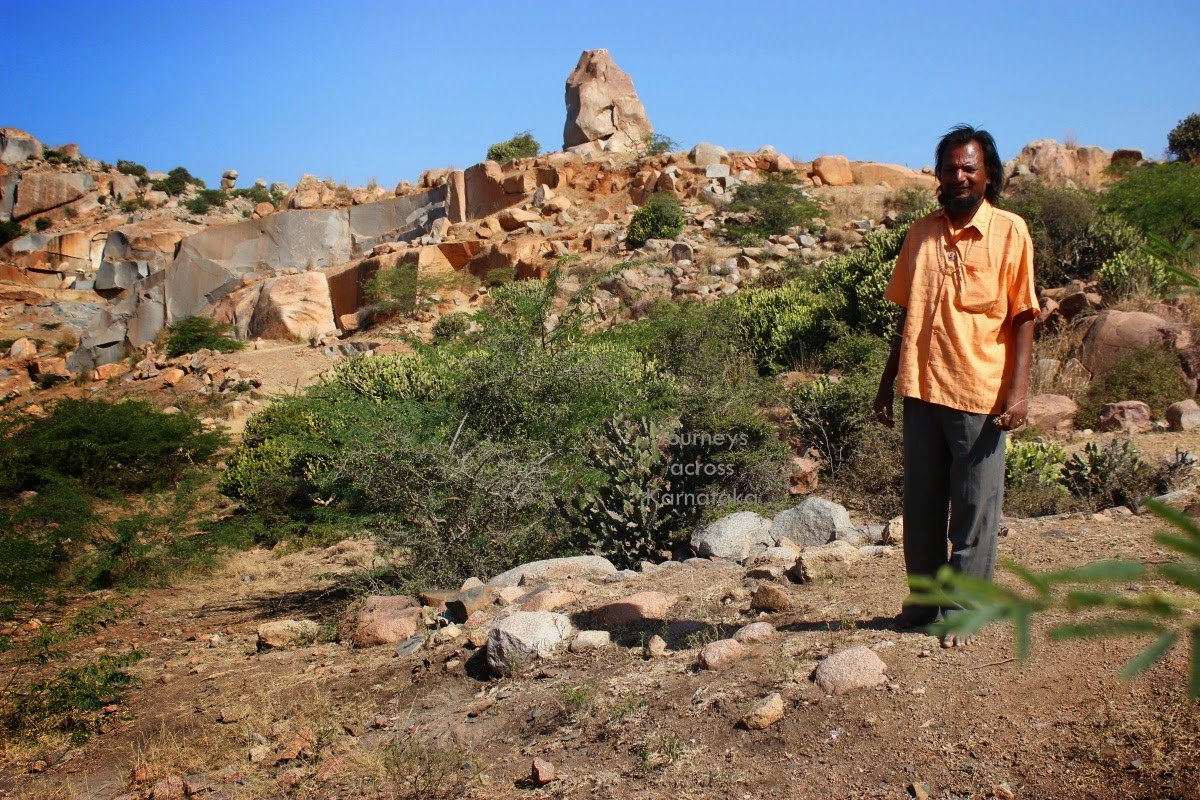 This article will continue.. do check out the following post - Prehistoric stone tools factory of Hiregudda, Sanganakallu - 2.
.........
Posted by siddeshwar at 12:30 AM

The place is so beautiful. The sky was so blue and nice.

Are these hills protected by ASI or Forest Dept? And will these hills disappear once quarring starts again.

You keeping records of all these sites is commendable - I doubt if even archaeology depts of colleges do what you are doing!

The project to protect this site has been stalled because the politician who initiated it is kind of inactive now. Hope our government revives the project which included a museum at the hill's base.