March 16, 2014
My third visit to Chitradurga fort. The primary objective of this visit was to see the spots where scenes of Kannada movie Hamsa Geethe were shot. However, I made it a point to see the awe-inspiring device for manufacturing gunpowder. I was seeing this again after nearly 14 years. 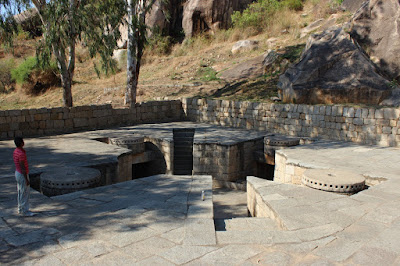 Description of the monument on the signage:
This is the most important and much visited spot of the hill fort. The somewhat subterranean four huge circular grinders of granite have been erected with a central circular rotating space set on massive beams. Located in the cardinal directions of North, South, East and West. These huge grinders have their top rotating half of the grinder teethed at sides to fasten them to the mechanical device of a rotator, fixed to the central pole of the circle. Each grinder below has independent chambers to receive the gunpowder. The gunpowder was shifted to the magazines near the palace.

The central circular space has provision for animal or man driven power to turn the grinder fastened to the central pole through yokes. A flight of steps at north west and south east descend to the well of the grinders which even now stand as a mute testimony for the engineering skills of those times.

I believe the yoke and other parts of rotating mechanism were made of wood. If this device was powered by oxen then the yokes had to be up here and not inside the pit. To turn 4 grinders simultaneously, the levers have to be long which happens only on ground level. Also, there must have been an upper floor to stock raw material and feed them into the grinders. So what we see is just the remains of an pretty sophisticated mill.
Each grinding stone is approximately 3½ feet diameter supported on thick beams. Among all the fort walls, bastions, turrets, temples, palaces and other regular structures this mill is an unique creation. The builders had to be wary of precision because of moving parts. 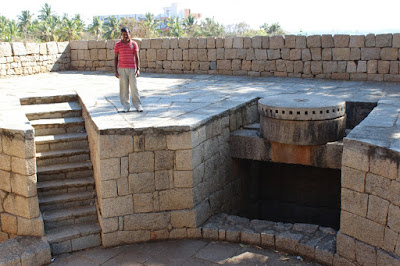 Raw material flowed into the grinder and powdered matter fell out from the sides into the pit below. It is possible that baskets were hung from the beams to collect the powder. The end product of this mill would be transported manually from here to store room. 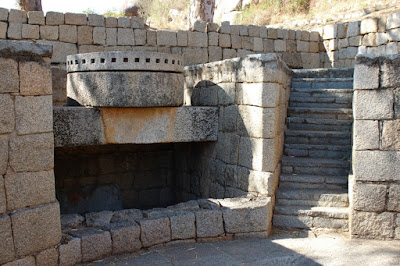 The signage says this gun-powder was produced here but its also possible that food grains were milled here to produce flour. My imagination is based on the info that two granite tanks close by were used to store oil and ghee. Its quite possible this was a food processing centre. Here's one one tank, rectangular shape measuring approximately 6' x 8' x 6' deep that would be 6000 litres. 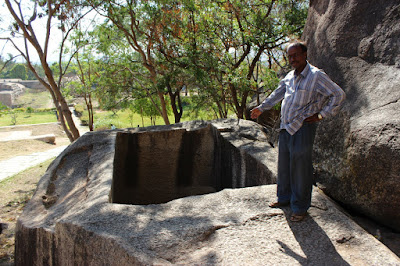 The second tank is oval shaped and covered with slabs and mortar. 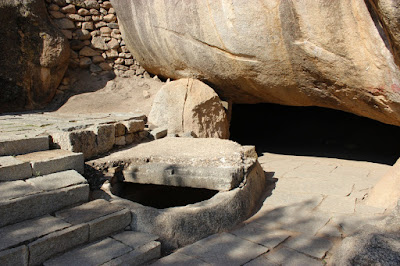 Chitradurga fort was planned such that it would remain self sufficient for a long siege.. probably it had enough food storing capacity to last a year or more. It had am efficient rain water harvesting system and springs too. For man to bring such powerful self-defence and survival systems, imagine how many dangers prevailed in those days.
.........
Posted by siddeshwar at 12:30 AM