August 13, 2017
This temple is right besides Zenana enclosure. We decided to pay it a visit after our short break at Pattada Yellamma temple. Our biker friend from Pune, Nilesh decided to nap while we were here. The temple is situated on a slope, so when we approached the temple from west, it looked like it was below ground level. Its a mini complex consisting of two shrines and two mantapas. The huge idol of Hanuman is eye-catching. 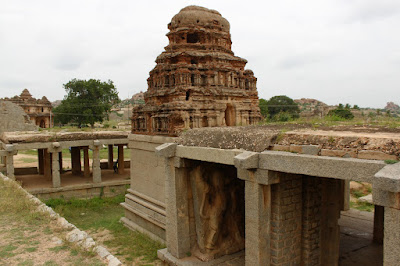 A signage at the temple describes the temple as..
Madhava (Ranga) Temple: Popularly known as Ranga temple, dedicated to Madhawa as per the inscription is built along with the Devi shrine in east west orientation. The Madhawa temple has a Garbhagriha, a vestibule and a large 18 pillared Mukhamantapa. The temple is known for its colossal sculpture of Hanuman three meters high, placed in Mukhamantapa. The Devi shrine is built on a raised Adhisthana of 2.5 meters high.

An inscription of the time of Sadashivaraya in the temple dated to 1545 AD records the construction of a Rangamantapa for the god Madhava by Timmaraju son of Vallabharaju exclusively for holding dance, vocal and instrumental music concerts in the temple. The pillars of this temple have sculptural depictions of Garuda, Vitthala, Surya, Balakrishna, Hanuman and Alwar. The sculptures of Krishna Leela, Vitthalam Srinivasa and episodes of Prahlada, Matsya Varaha and Narasimha incarnations of Vishnu on the architrave are of interest. 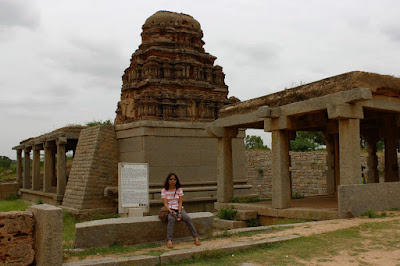 The temple has undergone some serious reinforcement to keep it standing. In the above picture, you can see a sloping wall- that's a recent addition to support the original structure. Also, inside the temple (below), there is one extra column of dressed blocks and the vestibule door-frame too. At the first glance, the mantapa and temple look top-heavy. However, the real reason for the damage could weak foundation. Anyway, happy to the structure standing. The huge idol of Hanuman is leaning on the wall, just behind the extra column. 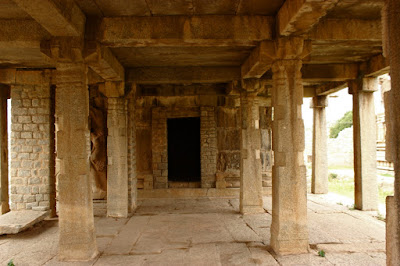 I can't remember seeing any deity inside but the star attraction of this temple is this well-built and slightly fierce looking Hanuman. 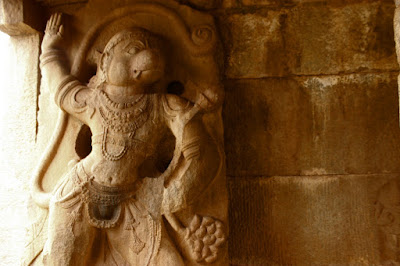 This is probably the largest monolith Hanuman I've seen. Impressive! 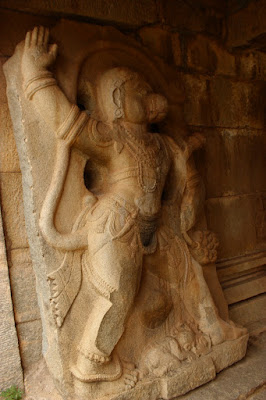 The  horizontally placed slab carries an inscription. this must be the one that is mentioned in the signage. The entire face of the slab is covered with Kannada or Telugu text. 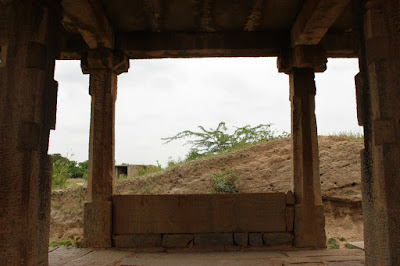 The temple-complex courtyard is kind of littered.. many slabs are kept standing on their sides as though restoration work was abandoned before completion. On the right is a Mantapa with richly sculpted pillars depicting several characters from Hindu legends. As usual, the pillars also carry an assortment of thought provoking sculptures. 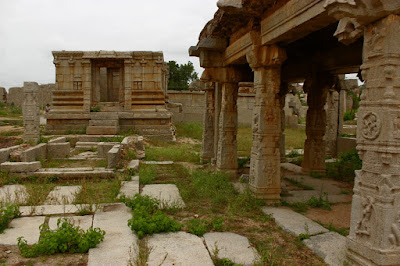 The most popular being the four monkeys.. here you see four bodies but only four pairs of limbs and two tails. However, when you look at any monkey, its complete with limbs and tail. 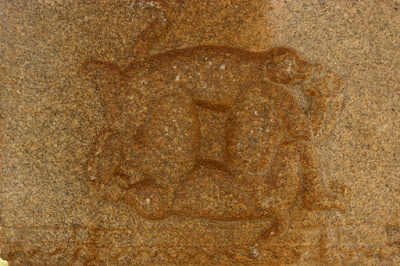 One of the pillars. Each pillar carries a dozen sculptures and there are at least 30 such pillars and images are unique. One can go round-n-round and get captivated by these amazing creations. Here are few examples.. Anjaneya sitting on his coiled tail to make a seat higher than the throne of Ravana. Then we have Krishna slaying Kaliya the serpent. 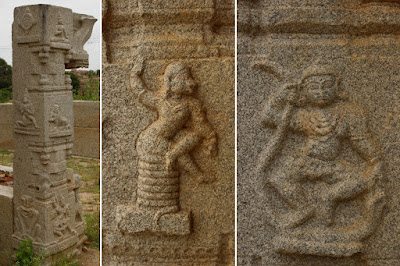 Then we have a beautiful damsel graced with flowing garment or a creeper. Wish the arms were slender, would've been proportional. The chubby image seems like Narasimha. It could be related to the story of Narasimha assuring protection to serpents. 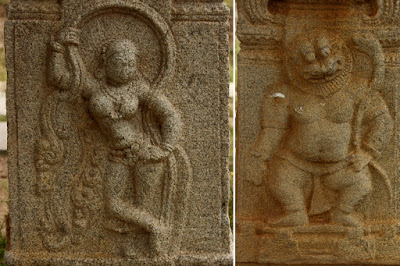 These images were shot in C9 Pro. A huntress.. monkey picking a thorn from her foot. And Garuda. 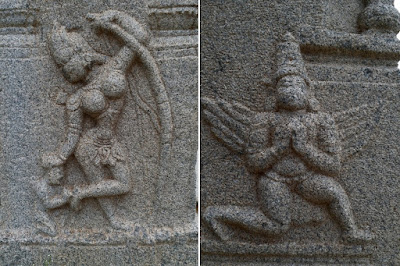 This is the temple dedicated to Devi, its an incomplete structure but one planned to be really grand. Being in the vicinity of Hazara Rama temple complex, this one had to be on par. 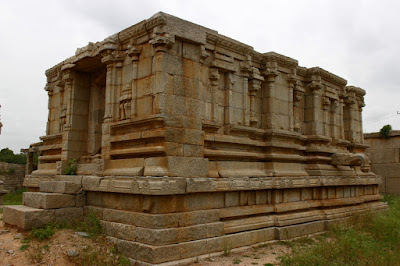 In the foreground is the pipe to drain out liquid offerings from Garbhagudi. Functional and aesthetic but may not be cost effective :) In the background is the mantapa. See the roofing, it looks so heavy. Chalkyan builders mostly used stone roofing which really worked well and also lasted, some of the structures are intact.. I haven't seen any signs of restoration as such. I guess everything changes with time.. now we use mostly man made stuff.. bricks, cement, steel, etc. 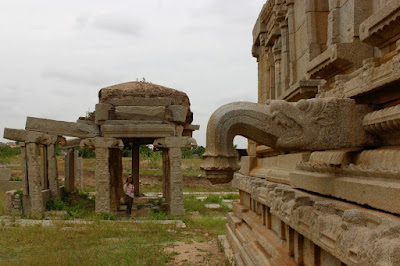 Another view of the stone pipe.. is it meant to depict the creature has a hollow tongue with a flowery end. Shifting focus to the main structure, it has several layers, all meant evoke a sense of grandeur. 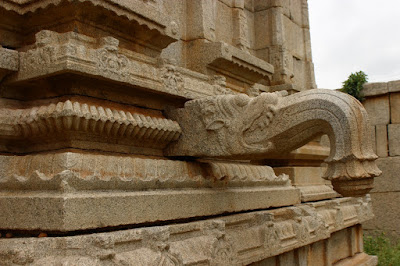 Lastly we come to the outer wall of this little complex. its a typical Vijayanagara style stone wall with brick & mortar filling. Most temples here had their own security system, they were like lockers to store gold and other valuable stuff? 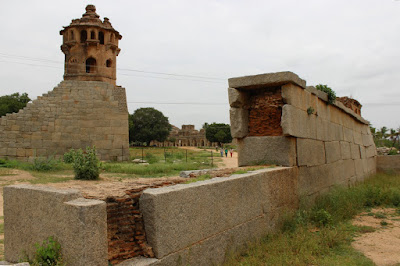 With all the incomplete constructions, probably Hampi was a prosperous and still growing city. If not for the abrupt end, it might have much more glorious. Or, was there was recession which had slowed down prosperity? Would be interesting to check out this bit with some researcher.
.........
Posted by siddeshwar at 12:30 AM

👍👍As usual good narration ✍️ and carries till the end. To keep the momentum so long and enjoying every bit of it is amazing. Let Nilesh be with you in many visits so that we wexpecmany more like this... 👌

Thank you Bharath and Dr. Umesh.

Very well covered Sid. But I'm bit baffled, one odd chip which is not fitting in my puzzle, that is sculpture of the beauty. All sculptures show related to Vaishnava sampradaya but chubby Damsel?

Thank you, Raj. Vijayanagara temple pillars do carry sculptures of dancing damsels, remember seeing at other locations as well. In fact, at temple entrances you can find larger idols on the door-frame. Where there's beauty, women have to be present, right?