Jain Basti on the village outskirts was our first stop. 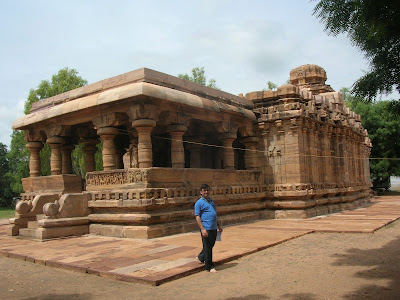 One look at this stone structure, you can tell it was restored. Every single stone was numbered and removed. A foundation was laid over which the temple was built again. Completely damaged parts- stones -were reproduced to match the original dimensions. According to care-taker, Rs.87 crores i.e. Rs.870,000,000 was the cost of restoration ...we found it difficult to believe. Whatever is the real cost, the job is well done. The only way this temple was recognizable as a Basti was by a 4 inch sculpturing of Mahaveera on one of the walls. I saw something I'd never seen before- a 1.5 feet wide and thick, 12 feet tall monolithic stairway connecting the floor to the ceiling, it must be about 2500kg. 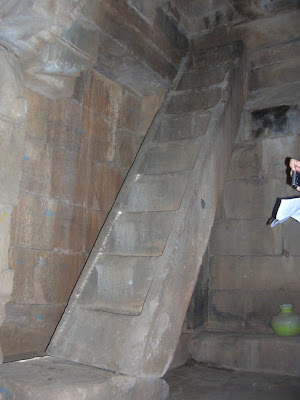 The care-taker showed us round with patience ...not many tourists visited eve though it's pretty close to the main temple complex. We thanked our guide and moved on to the main attraction of Pattadkal.

The entry ticket for Pattadkal Temple Complex, one of the 15 World Heritage Sites of India. 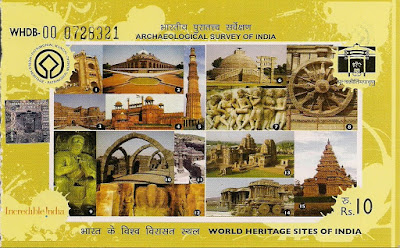 We struck a deal for Rs.150 with Basavaraj to show us around. Though he seemed young to be a guide, the way he welcomed us formally and then started off with the history was impressive. Pattadkal is situated on the river Malaprabha's bank ...these temples were built by Chalukyas between during the 7th century ...kings of those days would come here for pattabhisheka i.e. coronation. Temples here are built in 3 distinct architectural styles- Dravidian, Nagara and the third type is a mix of both. The temple dome is the part which helps identify the style. 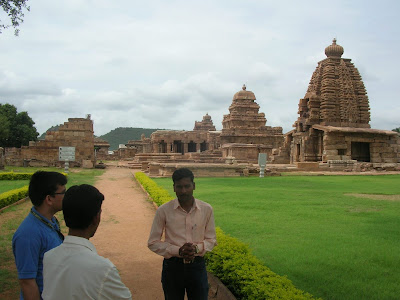 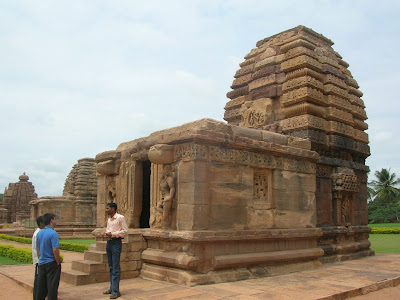 Basavaraj commenced the tour from Kadasiddeshwara temple followed by Jambulinga, Galaganatha, Sangameswara, Virupasksha, Mallikarjuna temples. The builders experimented with different designs engineering and aesthetics. The complex has about 10 temples. Pooja is performed only in Virupaksha temple. ...I cannot recall everything Basavaraj told.

October 2009, 2nd, 3rd and 4th Karnataka received heavy rains. Malaprabha river flooded the town and many people sat atop Sangameswara temple for couple of days. This reminded me about my visit to Ulavi on October 2nd and the temple poojari's comment about the rain- the heaviest he had ever seen. 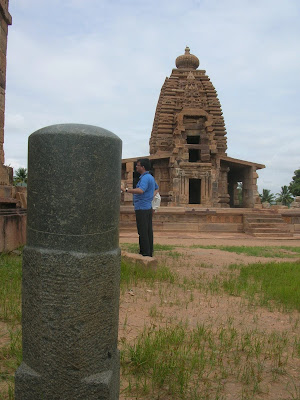 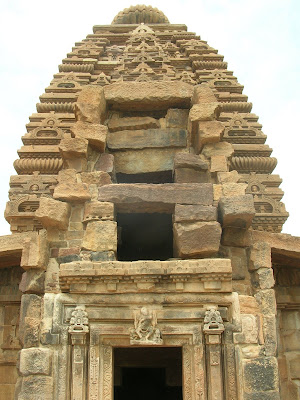 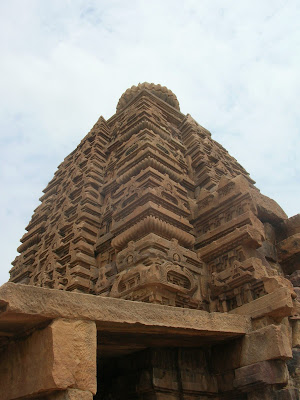 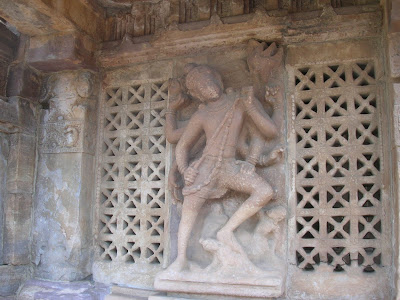 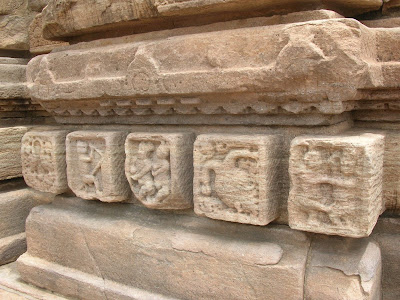 Characters in these five squares are supposed to be Ghanas.

This is Virupaksha temple built by Queen Lokamahadevi in 745AD to commemorate Vikramaditya II's victory over the Pallavas of Kanchi. 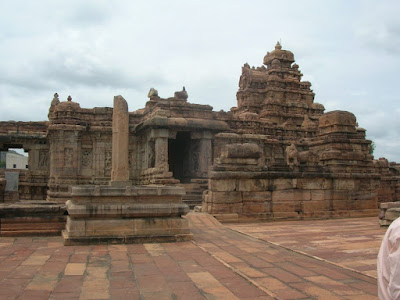 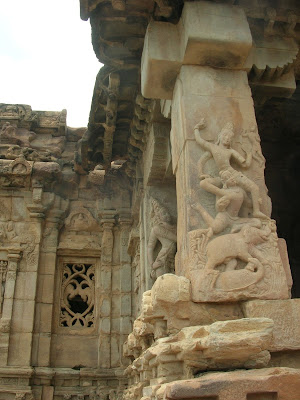 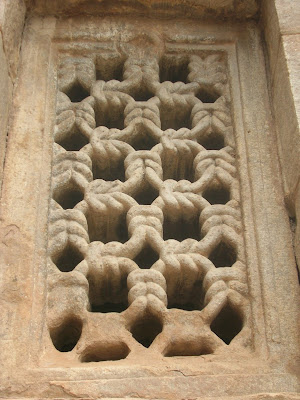 A decorated ventilator ...that's supposed to be a single rope fashioned into a grill. 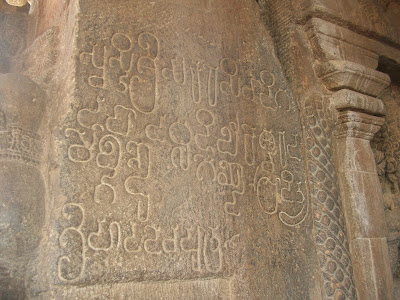 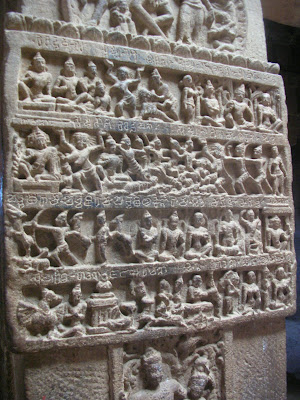 Scenes from Ramayana with inscriptions between the rows. 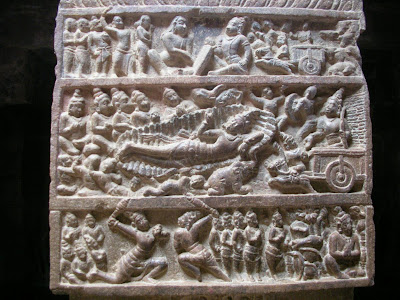 Scenes from Mahabharata. The middle panel shows Bhishma on a bed of arrows. 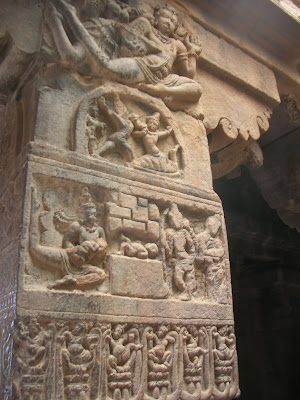 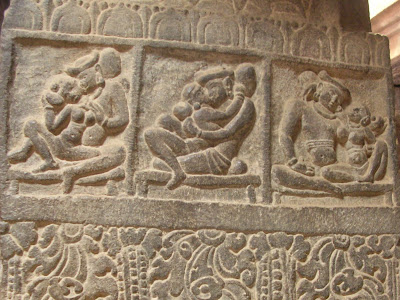 Sex was not considered a taboo those days. 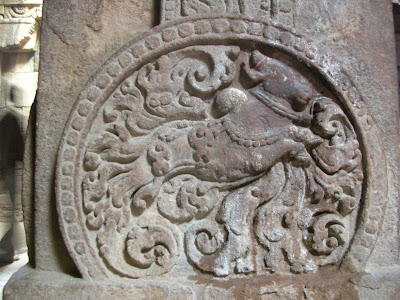 This is a flying bull with peacock feathers. The face is chubby ...looks cute. 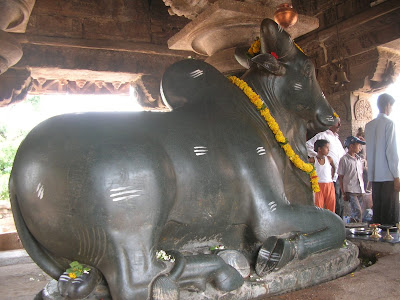 Pattadakal Basavanna belongs to the polished class (like the ones in Mahakoota, Banavasi, Halebidu). The flower in the nostril gave me a funny feeling ...I kept thinking Basavanna might sneeze anytime. Two photographers had a busy time meeting the demand from tourists to be snapped with this Basavanna. 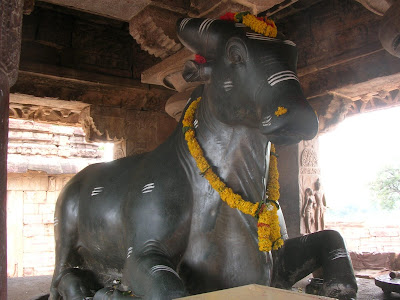 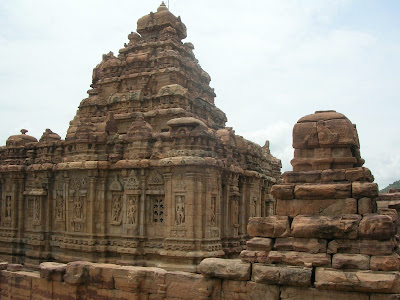 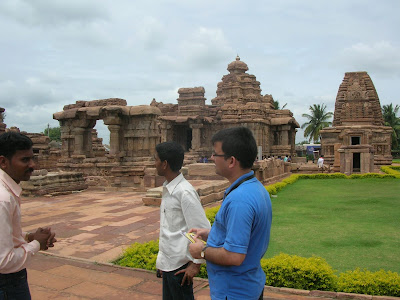 We narrow down on Kasivisvanatha temple. 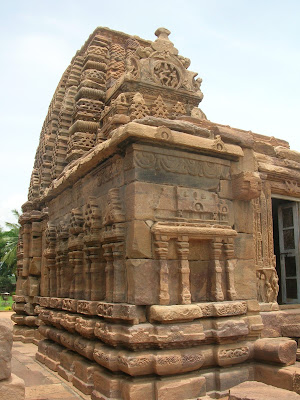 Of all the Nagara style temples Kasivisvanatha temple's shikhara is the most impressive to me. 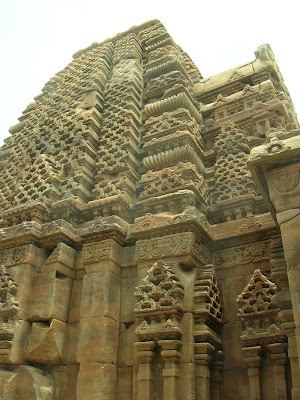 We must have spent about 2 hours in Pattadakal but what ever we saw is just the summary. One day I wish to come back and spend some more time.

This temple complex is definately on the cards.