I heard about Sirsangi from Dr.Umesh after my visit to Saundatti earlier this year. That's the time I heard about Sirsangi's connection with Girish Karnad's movie Ondanondu Kaladalli, Shankar Nag's first movie shot mid 70s. Ondanondu Kaladalli is one of my favorite Kannada movies. Sirsangi got added to my list of places to visit.
Coming from Gokak...

...it was past 2PM when we entered Sirsangi. Sangamesh, Dr.Umesh's nephew, was waiting for us at Basaveshwara temple. At Sangamesh's place, we had a filling lunch, prepared and served with so much affection. Feeling energized, we were ready for the tour. Sangamesh was our guide. We bid bye to Smt. Gangamma Turamari, Smt. Shanta and Nagaraj. 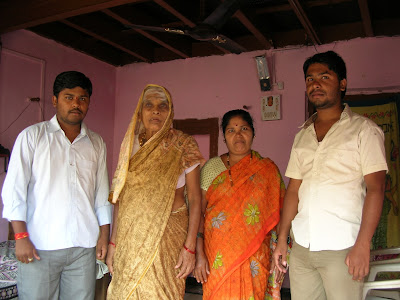 We started out tour with Desai Vaade. The fort was in a bad state until repair works restored it to the present state. The main gate is under lock & key to keep out vandals. Shantamma Yattinamani is in charge of the place. 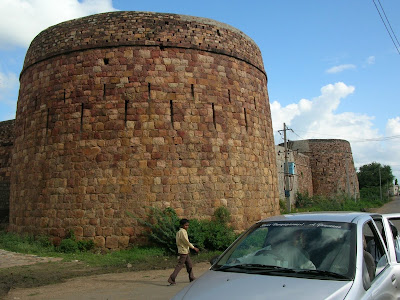 Sangamesh got the key and opened the doors. 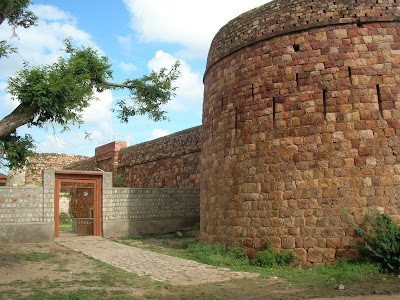 I felt much of its originality was lost... but still it's an interesting monument. 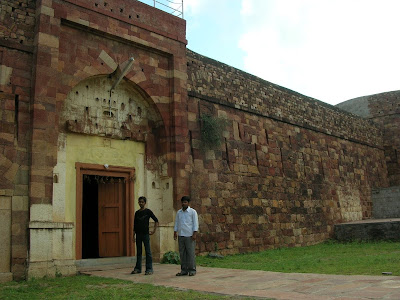 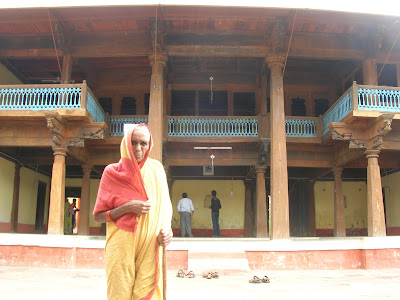 I was trying to imagine how Shrimant Lingaraj Desai of Sirasang conducted court here... Desai seated in the Chaavdi and village folk gathered to seek work or payment or to seek justice ...the place was a seat of power and wealth. 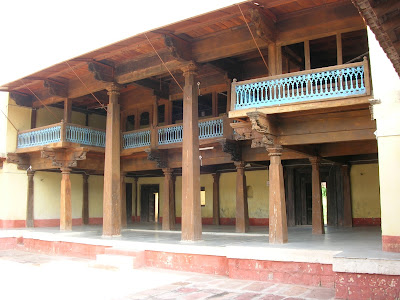 Quoting Dr.Umesh- ...the contribution from Tyagaveer "Lingaraj Desai" (Shirasangi, Navalgund and Saundatti provinces were under his rule) is really great. Whatever KLE is today, its because of his contribution (with an initial investment of 6 lakh -"Navalgund-Shirasangi Trust" - in 1906). Even the Shirasangi fort is almost in ruined state (u might have seen "Ondaanondu Kaladalli" Kannada movie..). When ever I pass by Saundatti/Shirasangi fort, I remember about his great contribution to education...

An abandoned treasury. In it's original condition, it's empty weight could be close to two quintal. 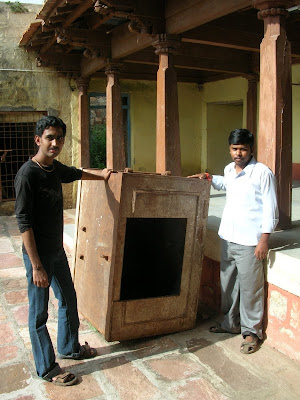 Like most Desai vaades, teak wood dominates Sirsangi vaade too. 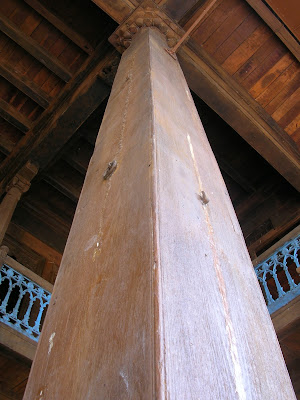 Intricate wood work decoration is the norm for most vaades. 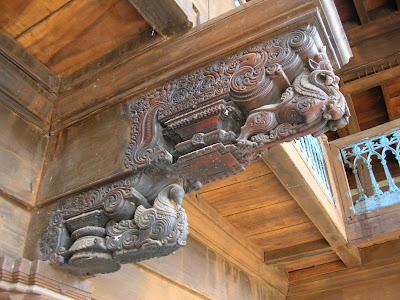 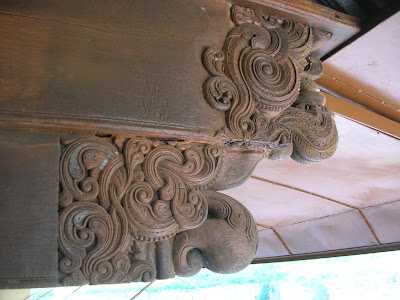 This is the pooja room. 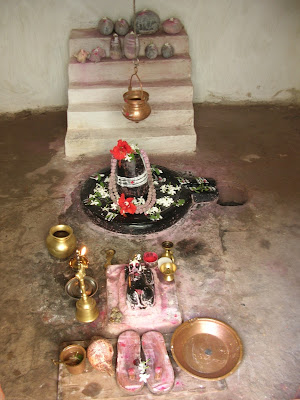 A British made agricultural implement. I was told this plough was pulled by elephants however I felt a couple of bison was sufficient. 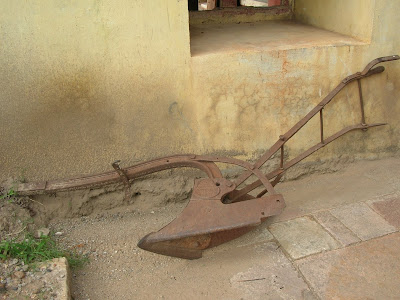 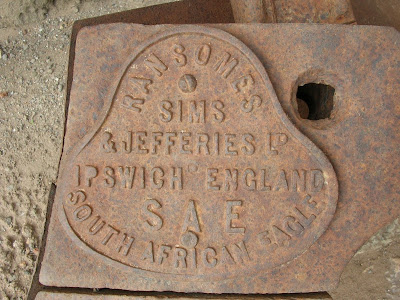 We went up to the first floor which was the family's private space. The grills could be cast iron of British era. 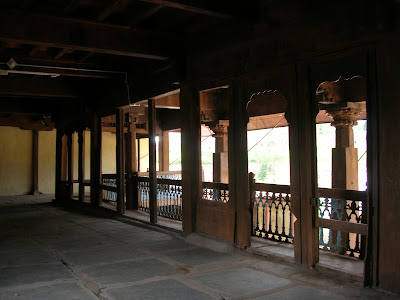 I was trying to visualize scenes from Ondanondu Kaladalli... but failed to spot the similarities. Of course over four decades things would have changed. Some scenes of the movie is also shot in another location, an ancient house at Turmari, a village near Kittur. 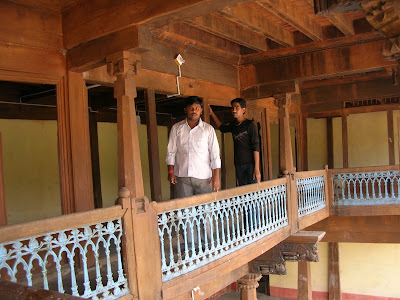 It's not easy to maintain vaades anymore. It's basically a structure built of stones and mud. These structures need regular maintenance which needs lot of manpower. 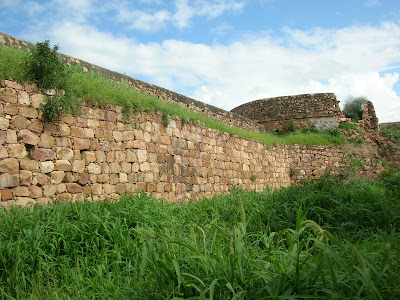 That's where guards would be stationed. Inside it's a mini hall on a raised platform. It could also serve as a resting place for some of the visitors... 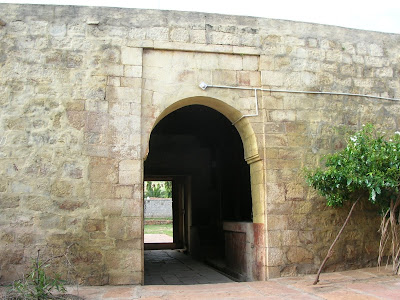 Our next destination- Kalikadevi Temple. That's Sangamesh standing next to square which is out-of-bounds for visitors. The metallic grill is completely covered with with coconuts wrapped in cloth, tied by people who have prayed here for their wishes to come true. It seems on Ugadi, one of the priests would stand in the square and throw balls of rice up into the air which do not come back but would vanish. 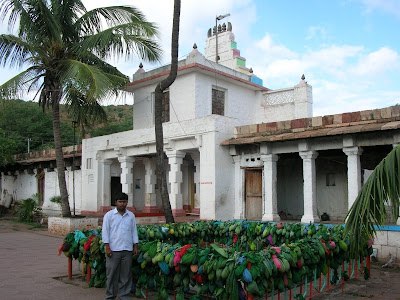 It's an ancient structure with lot interesting sculptures which would have demanded highly talented artists. 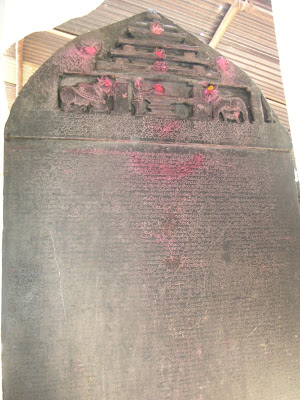 Deepastamba. There are two more such pillars on nearby rock hills. 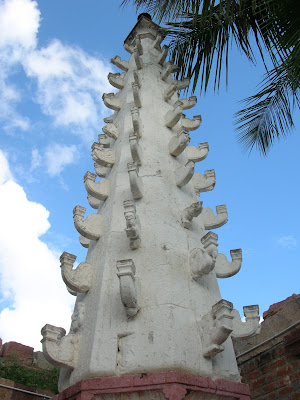 About a kilometer from Kalika Temple is Siddeshwara Guhe or Siddeshwara Gavi a cave temple dedicated to Lord Shiva. It's isolated and located in a shallow valley of rock hills. The atmosphere is peaceful and relaxing. 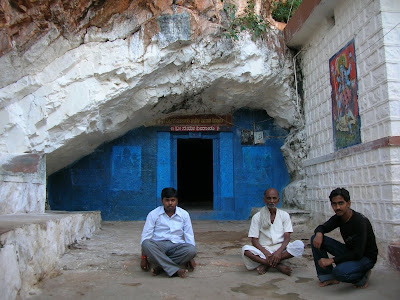 That's the interior... neat & tidy. Siddayya Kaanti is in-charge of the temple. Siddayya showed us the chamber behind the temple deity. The seems the cave continues as a underground tunnel which links to a holy place ...cannot recall the name. 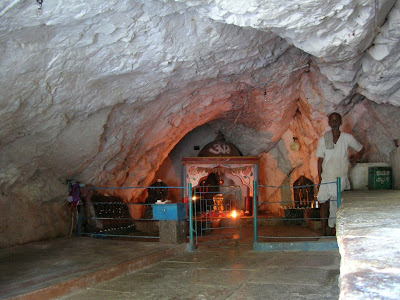 I heard this story from Sangamesh: some years back an ascetic used to live here doing penance and slowly became popular with local people. With donations pouring in the ascetic constructed few rooms and organised a kitchen, a library and visitors' quarters. But at some point of time, the Swami got involved in other activities... and landed himself in trouble with the law. He was evicted from the ashram and the place was put in charge of local people.

On our way back, we stopped by Babbudangiri Durgah, a Sufi mosque. 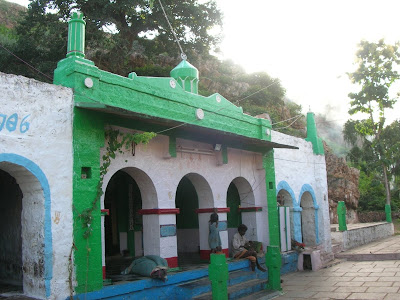 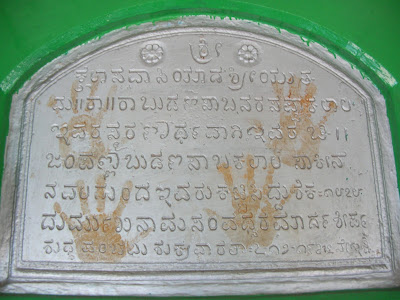 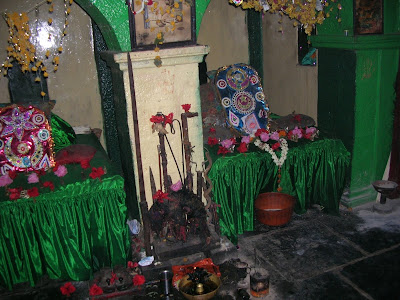 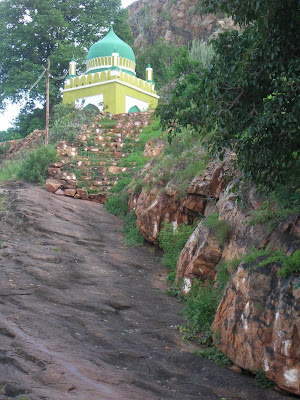 Wish I had gone up... some other day.

Desai Vaade, Kalikadevigudi, Siddeshwaragavi and Bababudan Durgah. A fort, an ancient temple, a cave temple and a durgah; so much to see in this little town! Thanks to Dr.Umesh for suggesting the place and Sangamesh being such a patient guide. One day I'll there to bother Sangamesh again.
.........
Posted by siddeshwar at 1:41 PM

Thanks for the detailed article (Journey across Shirasangi !...). Hope those who are not aware about the contribution of Shrimanth Lingaraj Desai to education (especially north Karnataka) will realize the key contribution.

When I read your blog, I get more info than actually visiting the places (the way you narrate the journey is really adorable)...

hi,
i've read ur blog on sirsangi village house and also checked ur profile and it seems that we have similar taste, im happy that there are still people who like our heritage and nature!
keep up the good work and thanks for all the information

thanks for beutiful pictures.do one more, please attach travel guide from eiher kolhapur or vijapur.

GREAT INFORMATION..... KALIKA TEMPLE IS MORE THAN 2000 YEARS AND SHE IS THE KULADEVATHA OF VISHWABRAHMINS THE DIVINE ARCHITECTS.

SHRINGARISHI DID HIS PENANCE HERE WHERE KALIKA DEVI APPEARED.

GOVERNMENT SHOULD DEVELOP THIS AS TOURISM AND RELIGIUOS PLACE.

dr Sivarama. Belgaum.
your blog is very informative. you should have added shri matha kalikadevi's pictures. some devoties long to see matha, would be pleased to visit your blog.
other pictures are excellent.
keep it up.

Loved your narration! Seriously govt should work towards saving ancient monuments. Keep up the good work. Way to go. :)

Thank you Vinod, Lingz and Yes.

Nice one Sir! I have heard about Sirsangi but could not able to visit the place. now I'm able to see how it looks.., kudos to your effort!