My maiden visit to Gulburga, the hottest district of Karnataka. January 29th, the final day of my four day visit of Bijapur, Bidar and Gulburga. We stayed 28-29 night at Heritage Inn, a minute's walk from Gulburga Fort's main entrance and a stones throw from the south-eastern wall. I woke up early and went out for a tea. The only place active was a street vendor, the owner had just preparing the first batch. I was his second customer of the day, tea was just too good ...I had two glasses. I had bath and ready to face the day. While I waited for my 3 uncles to get ready, I went up to the terrace to get few of shots of the fort. 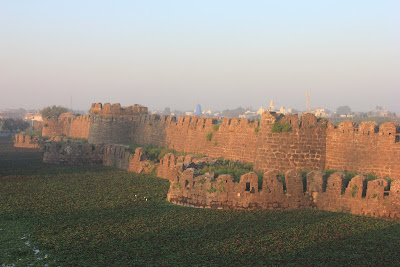 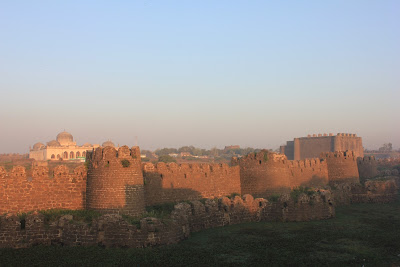 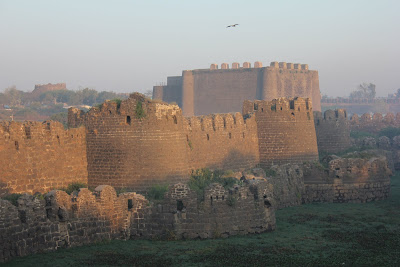 Water in the moat is covered by a layer of water plant commonly seen in our lakes. 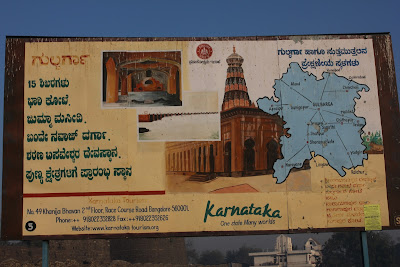 A board close to the Fort's main entrance. The temple in the in board is Sharanabasaveswara Temple, 10 minute walk from here. Another ASI board gave some useful info about the monument.

Gulburga Fort- The Fort in Gulburga, the capital of Bahamani Empire between 1347 to 1424 AD, was probably built by Raja Culchand of Warangal and afterwards strengthened by Ala-ud-dir Bahamani, is occupying an area of 74.10 acres and a circumfrence of 3 kilometers and consists of two rounds of fortifications. The outer wall is os lesser height while tinner fort wall is of greater height. There is s 30 feet deep moat around the fort. The fort carries tene (or Kanguras) at regular intervals and has 15 bastions and 26 guns. One of the cannon is about 29 feet long. the Principal gateways on the Wastern and western sides consists of pointed arches with openings flanked by bastions, approached by bridges across the moat. There is a continous parapet of merlons, raised over gateways, provided with narrow openings in them, through which muskets were fired. Though the palace and other structures inside the fort are in ruins, the Jumma Masjid which is still well preserved is noteworthy. 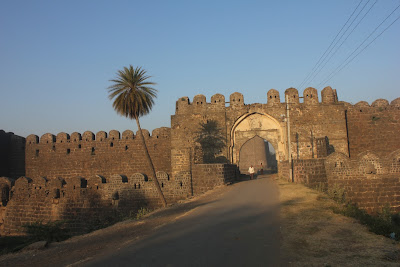 The main gateway to Gulgurga Fort. 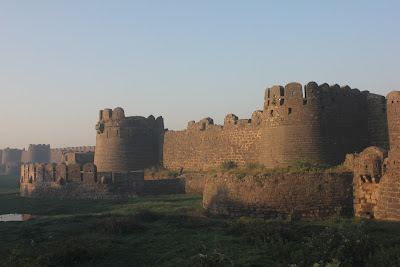 Moat and wall to the left of gateway. 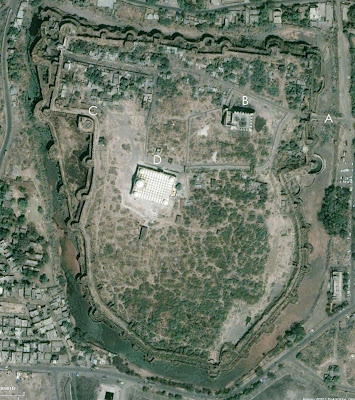 I've marked four places we saw in this screen shot of Google map.
A. main gateway to the east
B. central bastion, the command center
C. 29 feet cannon on a bastion in the western wall
D. Jumma Masjid 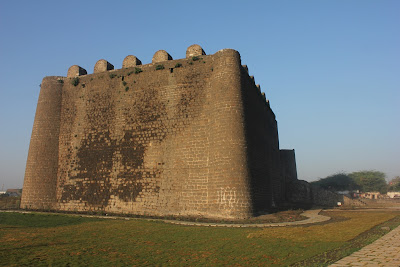 The central bastion. The gate was still locked. On request the caretaker let us in. One of the kids, Zuber, living in the fort, there are about 50 houses within the fort, got friendly and offered to be our guide. 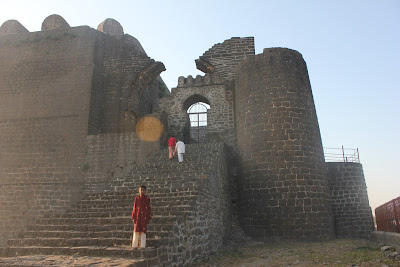 We asked Zuber if he could read inscriptions, he said he cannot since there are in Arabi. Zuber went about narrating things about the fort and Bahamani kings ...I regret n\for not recording his narration. Zuber studies at a Madrasa in Hyderabad and he was here for a vacation. 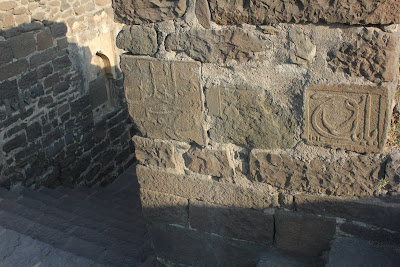 The ruins have seen plenty of repair work. Thanks to ASI. 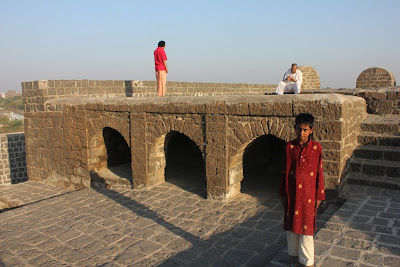 The bastion could be 80 feet high. It gives a commanding view of the city and it's surroundings. 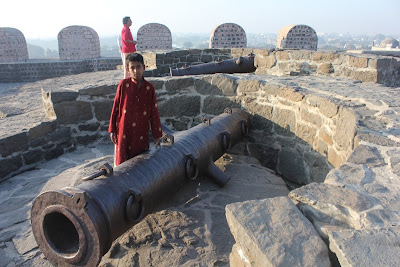 Three cannons rest here. Centuries ago they must have seen plenty of action. 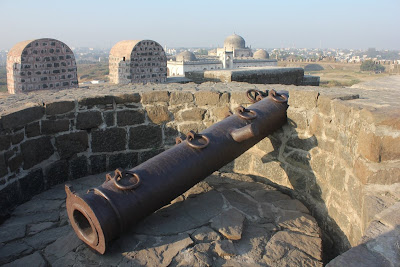 This is the largest of the three canons. Also one of the best preserved ones ever seen. Even the swivel is in working condition.. only we need men strong enough to push it around. 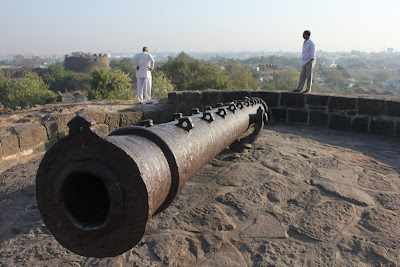 From here he pointed out few other monuments on the western side of Gulburga like Chor Gumbaz, Sheikh ka Roza and one more I cannot recall. We decided to check out the tall minars of Sheikh ka Roza later. He would be our guide for the day. He would also take us to the famous Khwaja Bande Nawaz Durgah. Zuber lead us to the 29 feet cannon. 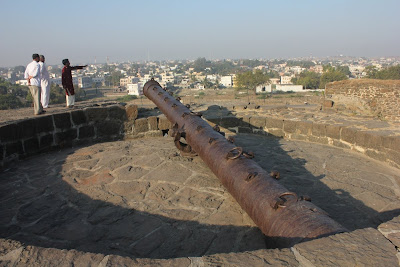 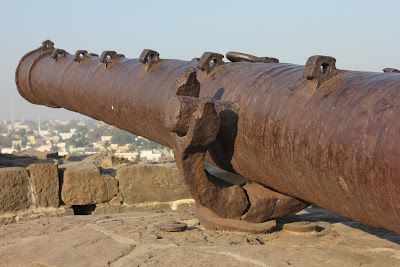 Jumma Masjid or Jamia Masjid as seen from the central bastion. 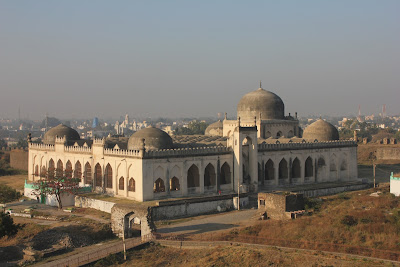 Western wall of the mosque. 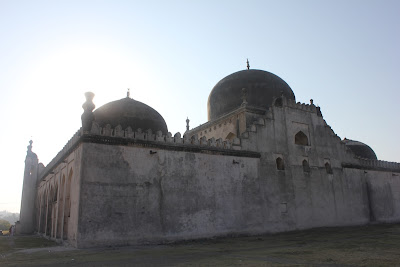 An ASI board has some useful information.
Jumma Maszid Gulburga- Jumma Maszid, also know as the Great moasque, was built and completed in 1367 by Rafi an architect hailing from Kwajwin province of Iran, during the reign of Mohamad I. it has a length of 176 feet (north-south) and can accomodate 5000 worshippers. It has neither a courtyard nor a hauz that were found in a traditional mosque. Supported on 140 pillars, it has 250 arches and five large domes of which the central dome is 80 feet in diameter and its interior surface is decorated with flowers and creepers. Ther are 63 smaller domes also. Persian architectural traditions and Indo-Islamic architectural features are seen in this mosque. Considerign the plan of this mosque it is usually said it resembles the famous mosque of Cardova city in Spain. But Yazdani opines that this mosque followed the plan of the Turkish mosques stylistically contemporary to the Byzantine. 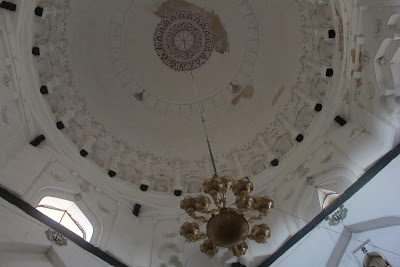 A chandelier hangs from the main dome. 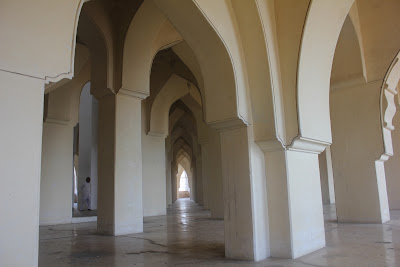 Zuber was talkative and seemed to have so much knowledge his fort and this mosque. He even knew a Urdu term for the perspective created by the intersecting lines of the arches. I forgot and now regret for not noting taking notes.

I happened to see additional info about this mosque on Wikimapia. The mosque is also known as Masjid-e-Husham, constructed during Sultan Feroz Shah Bahmani's reign, the successor of the Bahmani Sultanate founder Hassan Gango Bahmani. 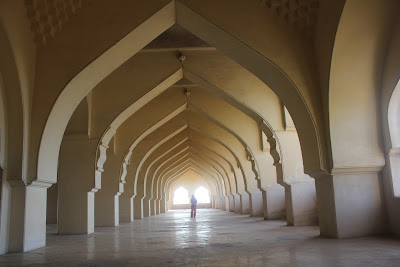 The inside of the mosque feels wonderfully cool.

A bunch of kids were here attending a Maulvi's classes. They were excited to see visitors this early. Few kids asked for pens... Zuber told me "angrez samajthe aapko" :)

We bundled into our hired Tavera, including Zuber and headed towards our hotel. We all had breakfast, checked out and then set out towards the other two destinations- Sheikh ka Roza and Khwaja Bande Nawaz Durgah.

Posted by siddeshwar at 1:35 AM