It's been a long time wish to see this hill fort... since college days. I heard about Gajendragad Fort from my engineering classmate Abdul Wahab.

I was one a day-trip with one of my maternal uncles, places for the day were Nargund fort, Sudi, Gajendragad Fort, Naregal and Annigeri. At Nargund we saw Sri Venkateswara temple, had breakfast but skipped the fort. We stopped at Sudi to check out it's lovely temples. About 4 km to Gajendragad town, we stopped at Kalakalesawara temple for almost an hour. At Gajendragad, we had pass through the busy market street to reach the base of the hill. We parked the cab close to the Gorphade mansion, the only way to climb the hill is by foot. The steps leading up the hill looked daunting to mama, he stayed back in the cab. 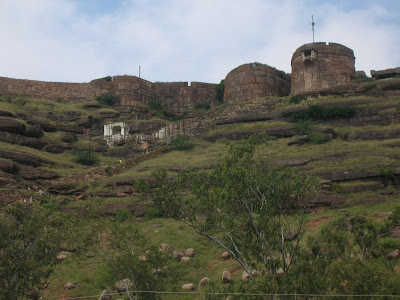 It's been a while I'd climbed but I went up slow, almost non-stop. 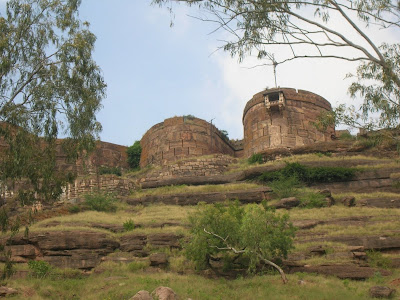 The bastions. The entrance is hidden from this view. 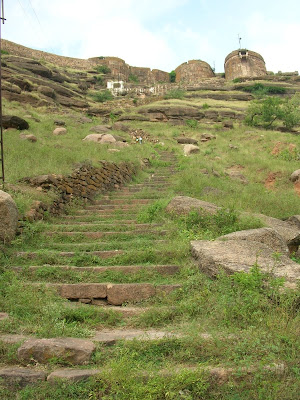 Well used steps. I could see kids and ladies with baskets climbing. I wonder what's their interest was. 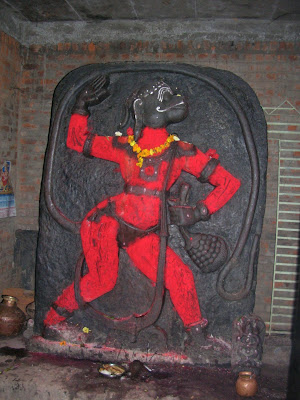 Lord Hanuman's idol in the small whitewashed temple about two-thirds way up. 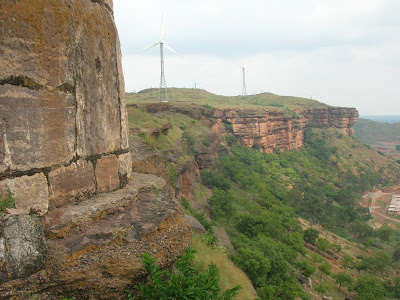 Almost there. The other side of the hill. 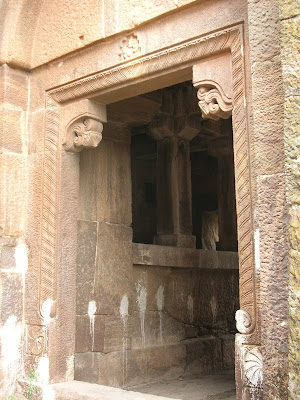 That's the entrance to the fort. 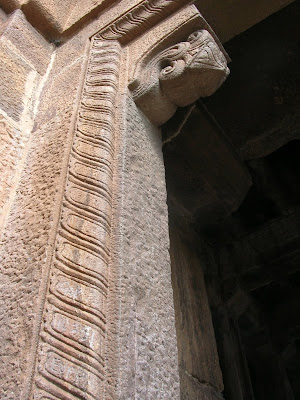 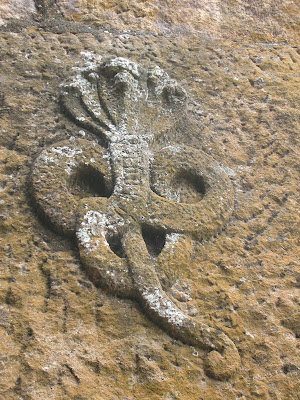 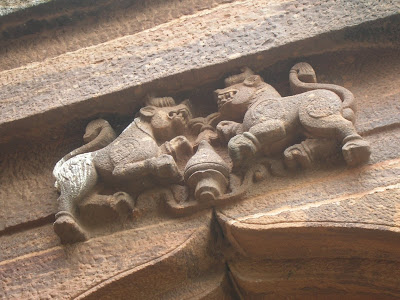 Two lions facing each other. 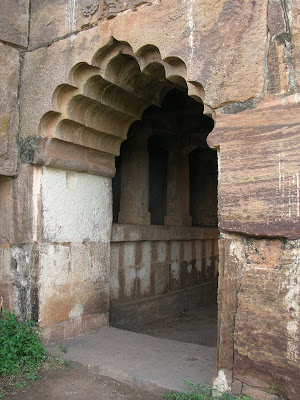 Architecture typical to temples and forts of Maharashtra. This fort was built during Chatrapathi Shivaji's reign. The Gorphades were the rulers of Gajendragad. 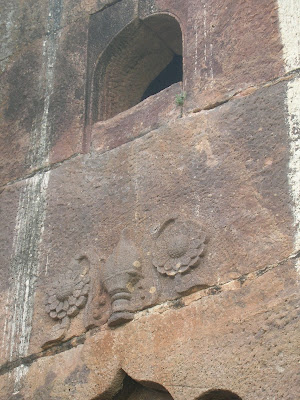 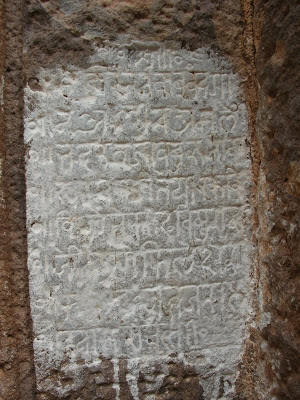 Inscription in Marathi ...that's my guess. 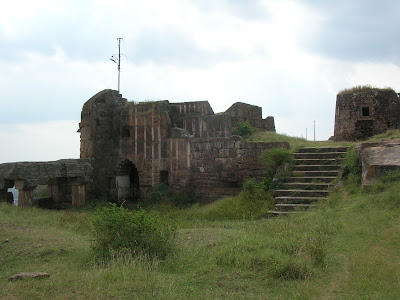 Inside the fort, looking towards the gateway. I went up the steps. 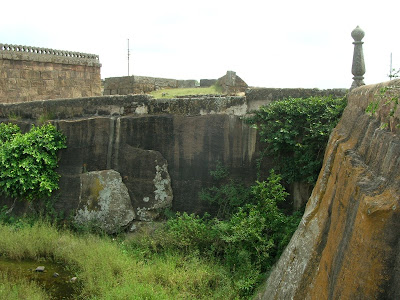 A tank carved out in bed of rock. This would be used to store rain water for soldiers' use. 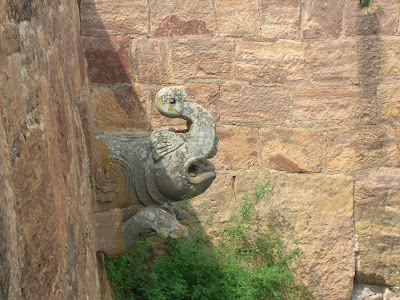 Elephant head. Gajendragad = Gajendra + gad = elephant + fort. Was it supposed to mean as the fort was as strong as an elephant? But what's the idea of this idol in the tank wall. There was no information available, not board or a guide I could see. 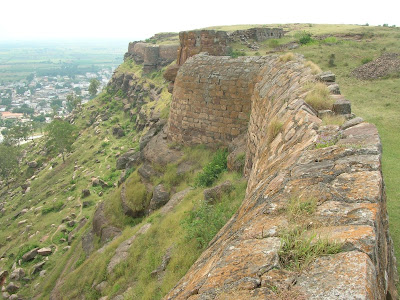 I went walking along the wall. 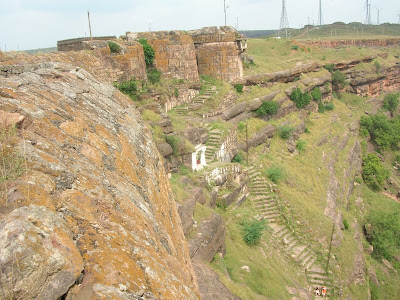 Stopping to admire the view. 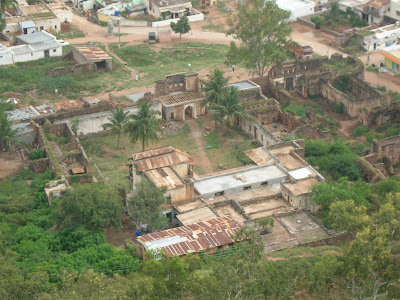 Gorphade mansion which had seen better days. Even though it was sunny, I could not feel the heat much because of the constantly blowing wind. 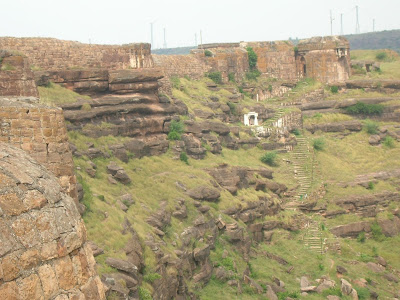 I wonder how workers moved these heavy stones so close to the edges. 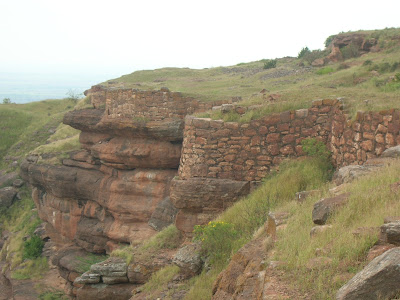 The wall went on and on. I'd had a light breakfast and was getting hungry now. I decided to cut my tour of the wall and headed towards the center which is more or less flat open field. The Durgah caught my attention. I prayed, paid some money to the care-taker and got a spoonful sugar as prasad. Now I know why people come here. Few Muslim ladies were picnicking in the shade of a small tree close by ...visitors to Durgah. 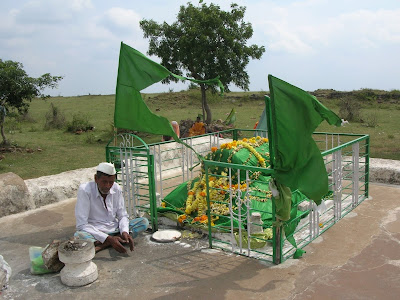 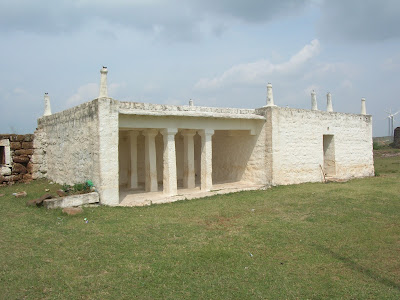 Close to the Durgah was this Deepastamba. From here I could see Kalakaleswaar temple. 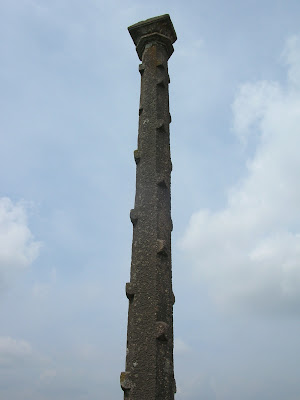 From the Durgah I walked towards some ruins which looked like a small fort within the fort. Probably it housed the commanding officer's residence and office. Another water tank carved out of the rock. 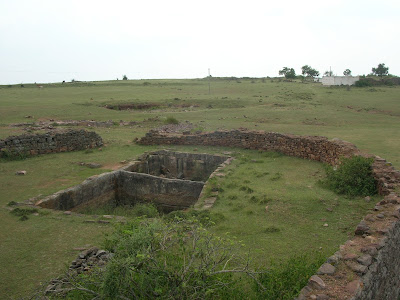 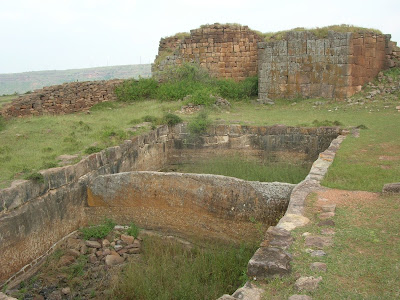 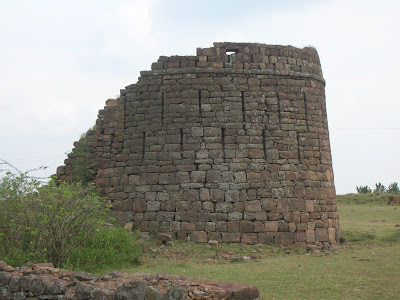 The inside of the fort with a fort. 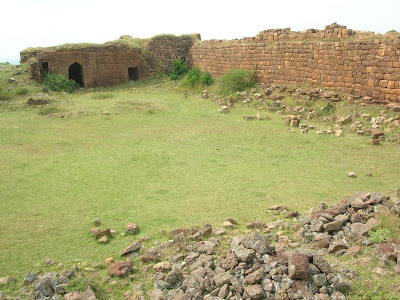 Looks like work some art work was abandoned. I cannot stop marvelling at skill and talent to shape stones back then. I was getting more hungry with every passing moment. I decided to head back. 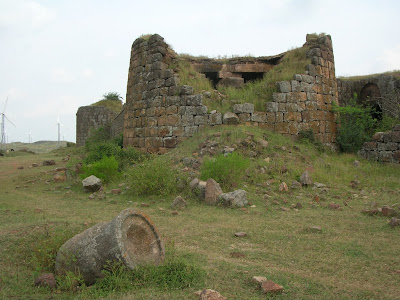 Another long time wish was to see wind mills real closely. This visit made that wish come true. I spoke to the shepherd from a village close to Belgaum. I was shooting a video, the shepherds dog happened to get into the view, he was so happy to see his dog in the video when I played it for him :) 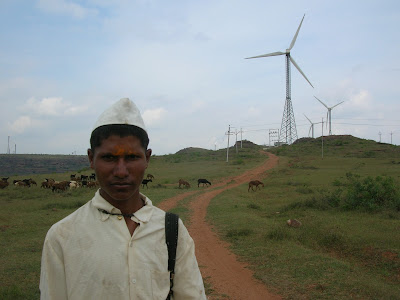 I said bye to him and then to the fort. I descended much faster then I had ascended. Back at the car I got a good wash and then gulped down water and headed out of Gajendragad towards Naregal. Two dhabas we passed by were closed because of Deepawali. Great! We had control our hunger for another 30 minutes until we reached Naregal.

Ghorpades, if I m not mistaken were cousins of Chatrapati Shivaji. Their patriarch Baji Ghorpade was arch rival of Shahajiraje (father of Shivaji)in the Bijapur court and had met his end at the hands of Shivaji. The Ghorapde seat was Mudhol/Sandur/Gutti in Karnataka.However a branch of Ghorpades came to be close aides of Ch.Sambhajiraje ( Shivajis son)

Awesome fort , Thanks for sharing about this place .

Sandur - yes. The Gorpahdes of Gajendragad have relatives at Sandur. In fact I saw a group photo of the family taken during a get-together. I have no idea about Mudhol. Gutti - do you mean Gooty in Andhra Pradesh?

Gutti I assume is near Belgaum and Mudhol is near Bagalkot.

You are right. A minister by name Sri. Murarirao Yeshwantrao Ghorpade's (Karnataka's Rural Development and Panchayatraj- from Sandur) ancestors and I think still they have the same influence and they have some edn., institutes. If you see the Mumbai Karnatak region (Ramdurg, Jamkhandi, Nargund, Gajendraghad... many provinces a few to name...) many were ruled by Patawardhans, Ghorpades and (Bhaskar Rao) Bhaves ...

thanx for uploading . I really feel happy about this . actually this place is my native , I proud f my native :)

by some destiny I came accross M.Y. Ghorpade's book "The Grand Resistance" there I learn how during the 18th century the Ghorpade branch of Maratha had helped secure RajaRam from Raigad to Gingee (!)

Rajaram was Ch.shivaji's second son and declared the new king after Aurangzeb cruely killed Sambhaji in 1689. Rajaram's survival was crucial at that time. It was Bahirji (HinduRao), Sidhoki and Murarirao (the ruler of Gooti, now in Andhra) who reached Rajaram to Ginjee fort (TNadu) safely.

I am now on a personal search to locate from literary sources, and then the actual route this crucial effort took. It consisted of several forts. I am also eager to find out at what places were Mughals camping during this period.

Only after reading the accounts I began to see more in the forts than meets the eye. Thanks to Siddeshwar to continuously unfold one place after next! :)

Absolutely right architect Nikhil, if one knows how to look, one would see more in forts than "what meets the eye." Forts are not mere walls, they are alive with stories from history hovering in and around them. For a king, forts were as important as his army. "More forts, Stronger kingdom" was Shivaji's maxim. Your endeavor to trace a historic route sounds very interesting ...thumbs up!

I am proud from Gajendragad
Thanks for give all details about our Netive place.

I will be visiting the fort on 24 March. Any facilities for staying overnight in Gajendragad village? Is staying on top of the fort possible/allowed?

Thanks for the info, Prajwal. There are few lodges Gajendragad but may not of city standards. About 55 kms from Gajendragad is Gadag, you can find decent lodges there. I'm not sure if staying at the fort is allowed however it may not be a good option considering safety.

Many thanks Siddheshwar,
I enjoyed nice pictures and information given..
Since high school days, I was curious about Gajendragad as one of classmate's surname is Gajendragadkar and now one of my distant colleague's...
Now I am definitely going to visit this place with my friends (शिवबाचे मावळे) and your information will help me a lot...
Many things to mention but I'll only say thanks again...

Thanks Sanjay. One of my classmates was from Gajendragad. When he mentioned the place, I was curious about it. Finally I got to visit the town and fort.

Nice photos, felt proud of my Native place
this place is so much old ,, and we have good history to cherish
Still there is a lot do to protect these