My first visit to Aihole and Meguti Temple was February 1996, during the 13-day tour around Karnataka on Hero Honda Splendor. I had forgotten about the fort completely. That's our guide whose name I cannot recall and me. 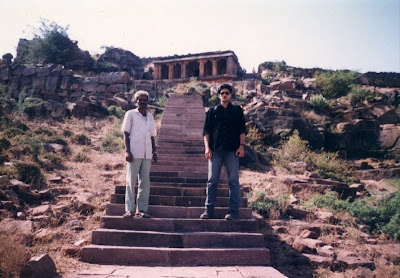 It's only recently I rediscovered Aihole Fort.

April 3, 2011. We arrive at Aihole around noon and spend time at Durga temple, Ravna Phadi temple, two other temple complexes, have lunch at a local Khanavali and come to the fort. 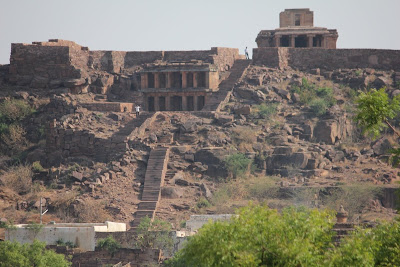 At the foot of the hill. 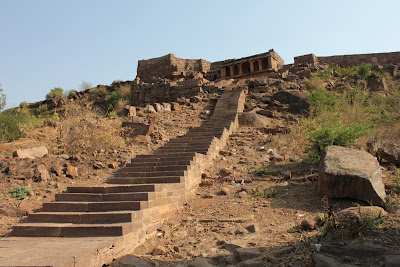 Half way up the hill. 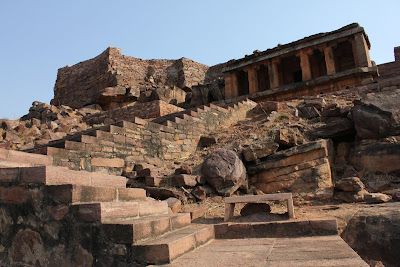 I pass by the two-story Buddhist temple. 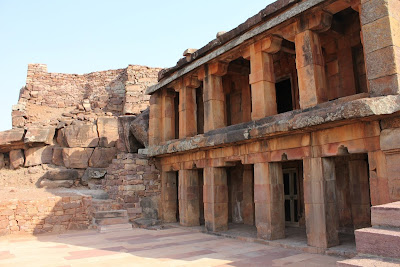 Meguti Temple as seen from the fort gateway. 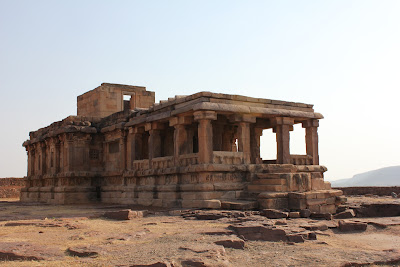 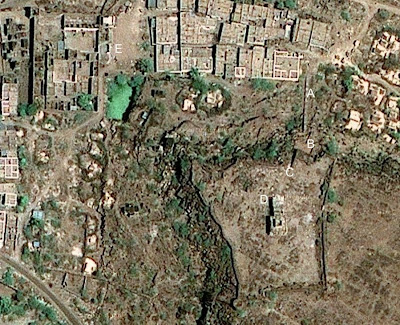 The fort walls are restored recently, stones packed with mud. The wall is not very high, at places its barely 10 feet. I went walking on the wall, clock-wise. I'm standing on South-East bastion looking towards the fort gateway. 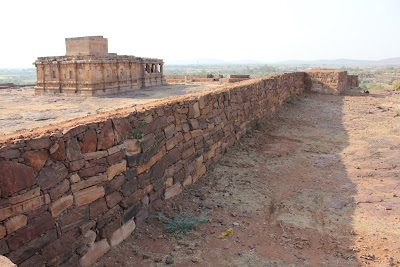 and to left, the South-West bastion. The water-body in the background must be Malaprabha river. 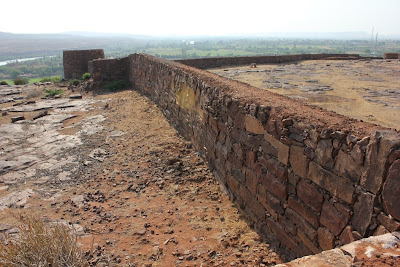 Closer look at the bastion. The job seems well done... on the surface. But the walls are pretty fragile. I wonder if the walls can withstand a good rainy season. The mud might run off with water under a heavy shower. 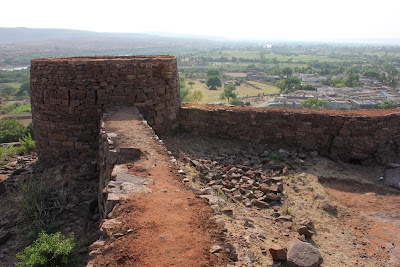 Rear side of Meguti temple. What a handsome structure it is! 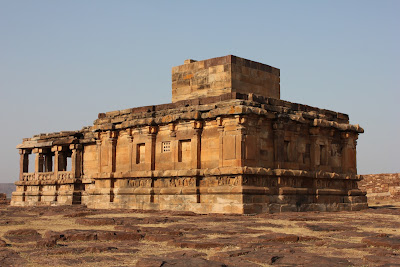 The South-West bastion as seen from middle of the Western wall. 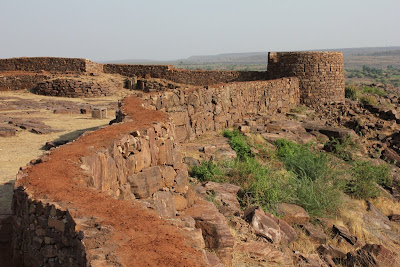 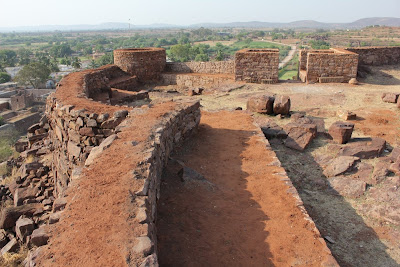 As seen from the North-West corner. 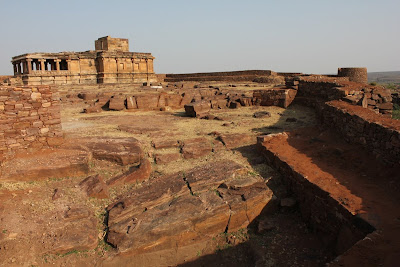 The structure looks solid and neat. The architecture is purely functional. 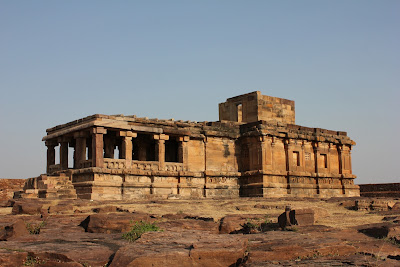 Quoting two lines from Wikipedia- The temple which was possibly never completed gives important evidence of early development in dravidian style of architecture. The dated inscription found on the outer wall of the temple records the construction of the temple by Ravikeerthi, a scholar in the court of emperor Pulakeshi II.

The half-standing tower in the middle and the sloping roof caught my attention. The place has a different look... it's a Desai vaade. Later in the day we actually visited the vaade. The owners live in some city, the care-takers showed us around. The place was being renovated. 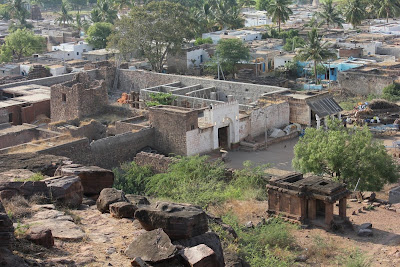 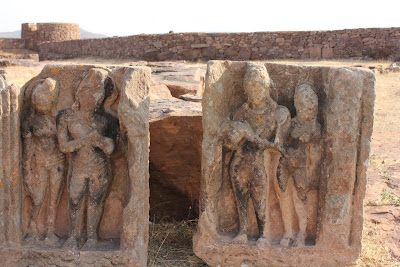 Is that Buddha in meditating position? 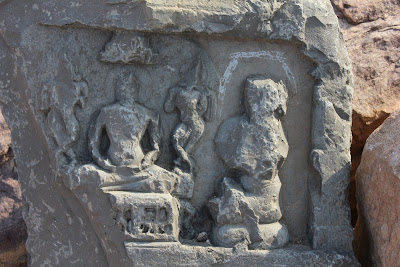 On the way down, I stop by the two-story Buddhist temple. The first floor had a rock-cut chamber, probably used for meditating. 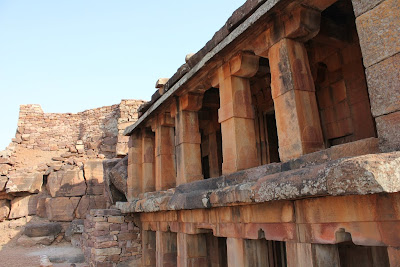 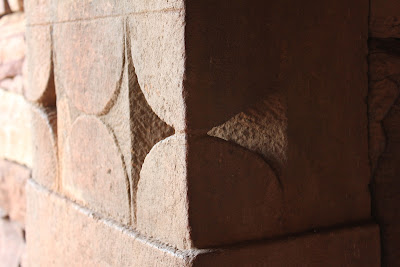 A signature in stone. 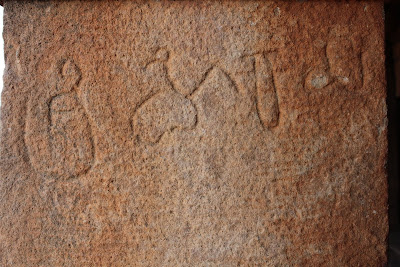 Praveen had come down quite some time back and befriended two brothers, locals living just where the steps start. They were chatting about agriculture and prices of jowar. One of the brothers has settled in Udupi and was on a vacation. The little girl in the middle is the Udupi brother's grand-daughter and the other two girls are her Aihole cousins. 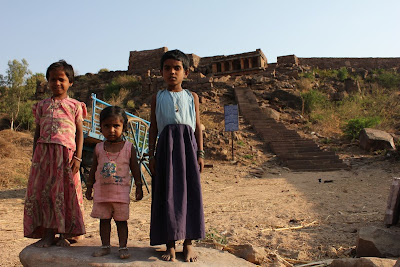