That's Gulli and I with our guide at Ravanaphadi back in 1996. 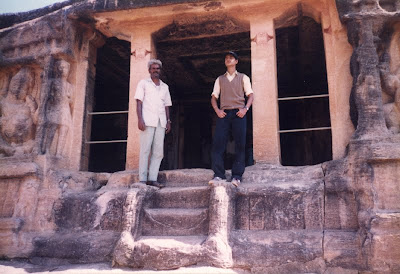 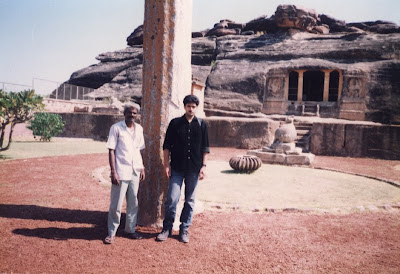 I remember our guide telling us that people lived in this temple and had been evicted recently. Walls and ceiling were soot coated. The Frangipani plant you see in the background to the left is fully grown now. The place is maintained well. Thanks to ASI. 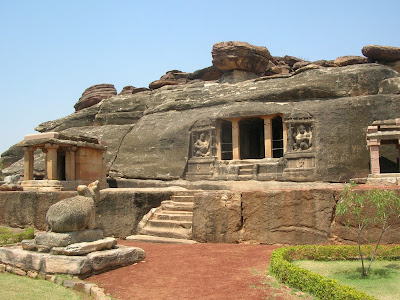 Ravanaphadi, also called Ravalaphadi, this is a rock-cut shrine and is a Shivalaya, btu smaller than Badami ones. Its exterior is simple with four pillars, and Padmanidhi and Shankhanidhi guards. It has a rectangular frontage and square inner wall. But the exterior has on its wall tall dancing Shiva with ten hands, equally tall Saptamatrikas observing Shiva's dance, rows of beautiful Ganas, figures of Varaha, Mahishamarshini, and other artistic slender figures. This is assigned to the sixth Century. The Garbhgriha has a Shivalinga with its Peetha and they are monolithic, on the walls on teh sides are Mahishamardhini and Varaha sculptures and Bhoodevi is seated on varaha's shoulder. Outside the cave there is a platform for Nandi in line with the Linga in the Garbhagriha and a monolithic stone pillar. 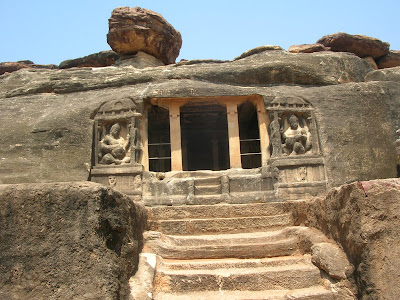 Shooting pictures in this temple is tricky work. Framing the right picture was a challenge. With only way for light to enter some parts are bright while most parts are dimly lit. Being new to SLR, I had a tough time framing the right shots. 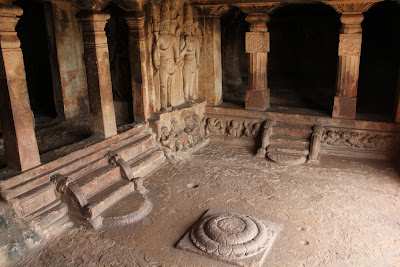 This little temple has full of art, even the steps are artistic. 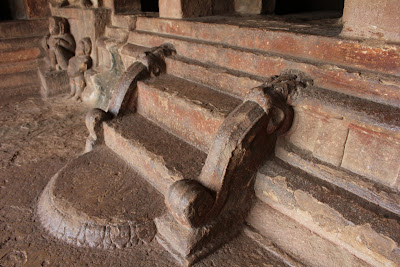 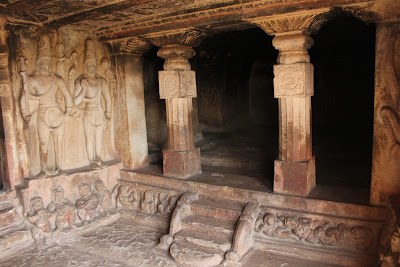 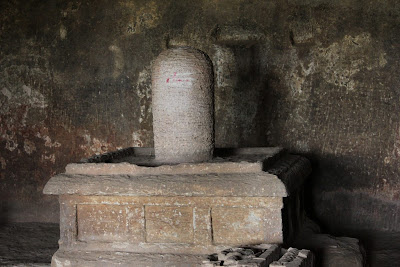 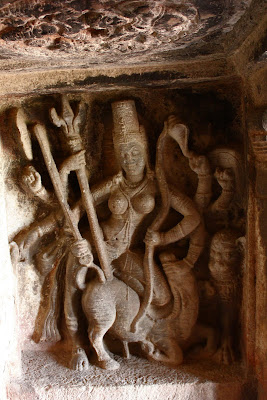 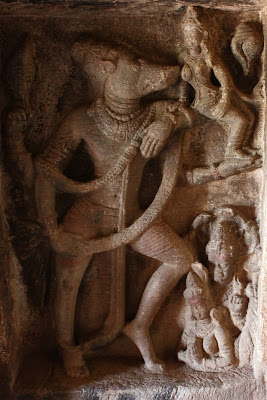 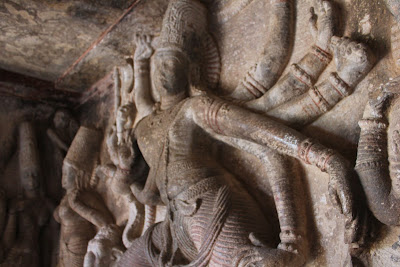 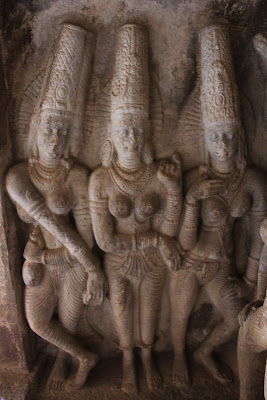 One of the seven Saptamatrikas is not seen here. 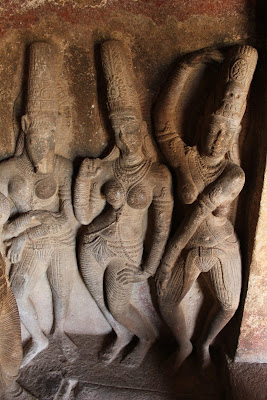 Shiva with Nagappa in his right hand and a trident standing next to him. Note the tall Jata with Crescent Moon on it. 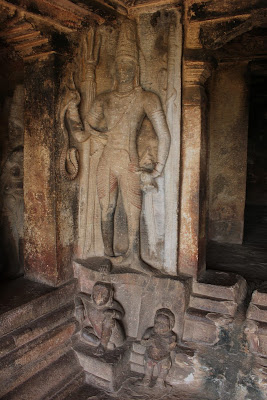 This is one of my favorite temples, I wish to come back and spend some more time here. 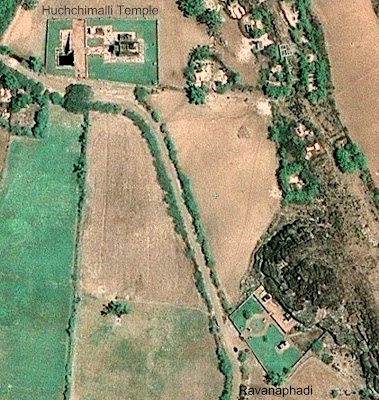 Back in 1996, I do not remember visiting this temple. 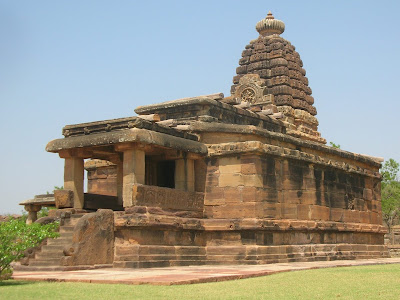 The Huchchimalligudi stands on an elevate platform and has a Mukhamantapa, a Rangamantapa and Garbhagriha, and is a Shivalaya. This temple is remembered for its wonderful sculpted figures. The doorframe has four divisions with wonderful and unique sculptural designs. They include amorous couple, elephants and Ganga and Yamuna motifs. Above the lintel which has Garuda sculpture, are images of Brahma, Shiva and Vishnu and floating celestial nymphs (Gandharvas). The niches in Sabhamantapa has figures of Indra, Yama, Kubera, etc. The Sabhamantapa doorframe has the same design as the one at the Garbhagriha. The Garbhagriha has a Rekhanagara Shikhara and on its side has images of Surya and Brahma on two sides. It has a tank and its walls too are full of fine sculptures of Dikpalas, Mahishamardini, Brahma, Vishnu, Gajalakshmi, Kartikeya, stories of Panchatantra and Kiratarjuniya etc. There is a small temple in front of Huchchimalli temple of which only Mukhamantapa remains, and it has row of nice Poornakumbha sculptures in a row. To the north of the Huchchimalli is another temple, a Kalyana Chalukya monument of the 11th Century and its Garbhagriha has a 'phansana' (stepped) Shikhara. 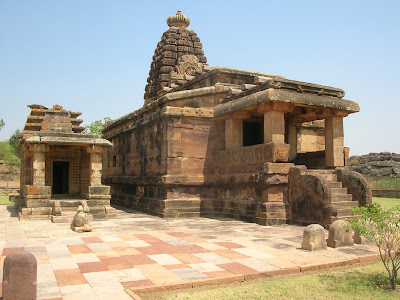 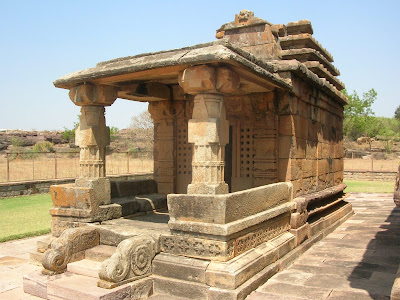 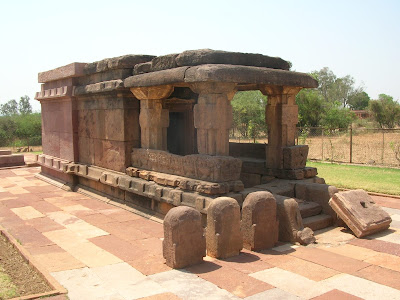 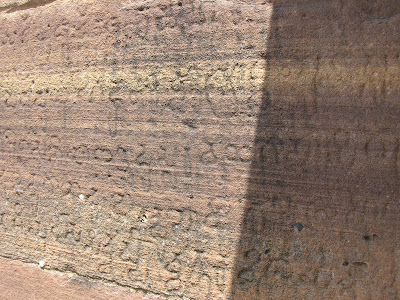 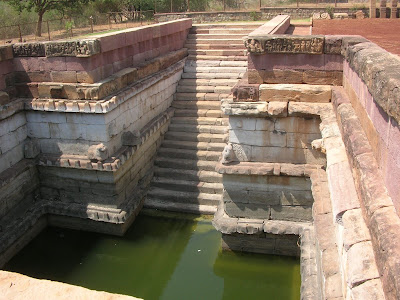 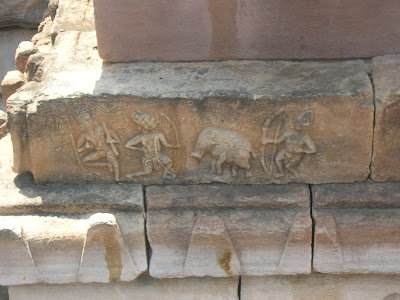 Amazing captures , some how missed Huchchimalli temple . Next time around should visit .

Even after 14 years' you have elaborated as if you had been very recently. I appreciate your memory and the way you narrate things is really appreciable.

Thank you - TGS and Dr.Umesh