Mali Mallesvara temple is situated on Indrakeela Parvatha, Koppal. The hill is also called Yamini Gudda by a user on Wikimapia. The temple is about 3 kms from Koppal bus-stand.

The temple was quite busy during my previous visit in March. I wanted to climb the hill next to the temple in search of Palki Gundu but dropped the idea because the up-n-down climb would need about 3 hours and and it was almost lunch time. I din't want to climb with a empty tummy and Sun beating down.

These pictures were taken during my second visit i.e. in June with Malatesh and Ravi. We had successfully located Palki Gundu on our own. We The temple deity Mali Mallesvara is an avatar of Lord Shiva. Its an ancient temple with plenty of modern touches. 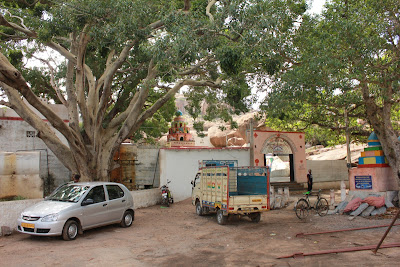 Four or five big trees provide shade for the entire temple. Within this temple complex are 3 or 4 smaller temples dedicated to various gods. 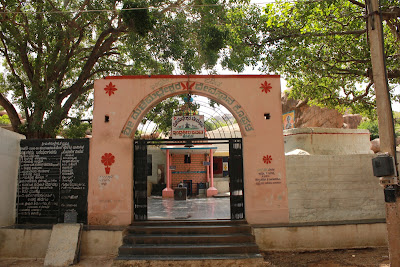 With good rains a stream flows next to the temple. However it was dry during both seasons. Many years ago this temple would be stop over for weary travelers. 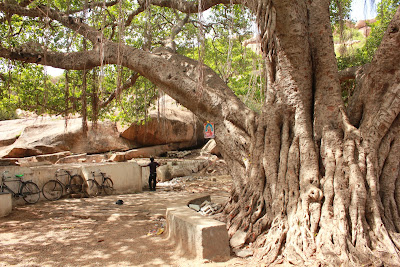 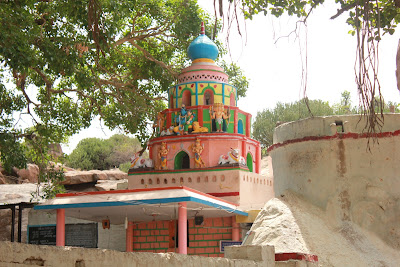 One of the temples has been created within a natural rock shelter. 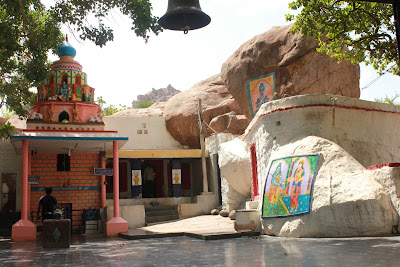 This temple is a nice get away for people of Koppal. The road to this temple passes through interesting rock formations. In fact this is a place one can find wildlife like Uda ~ monitor lizard and few rare birds. We saw a 2 feet long Uda resting on a rock right next to the road. By the time we got out the car and aimed the camera it has slithered down into the gaps out of our sight. Uda's feet can create vacuum, which results in immense grip- enough to bear a man's weight for several minutes. Trained Uda were used by Chatrapathi Shivaji's soldiers to scale enemy fort walls.