During my previous visit to Koppal and Male Mallesvara Devastana, a board next to the temple had confirmed that Palki Gundu is located on this hill - Indrakeela Betta. I put off climbing because I was hungry and tired.

We arrived at Male Mallesvara temple by 8-15 AM. We were three of us- Ravi, Malatesh and I. We took the tractor-trailer trodden dirt path behind the temple. Previous night's rain had done some good, we could see puddles of water in our path. Indrakeela Betta looked fresh and clean. The climb on our right looked fine and we headed in that direction. The hill, as you see, is bolder ridden. We have to find a way up using these boulders as steps. 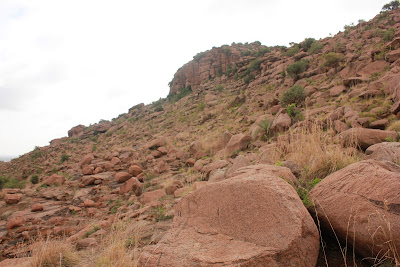 On reaching a plateau about half way up the hill, Koppal fort and lake came into view. The lake water level seemed to have dipped slightly in 3 months. 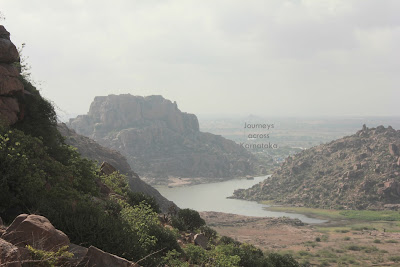 We were climbing the 2nd stage of his hill, slightly steeper. We found a line of arranged boulders which looked like a base of a wall. Perhaps a plan to build another fort here was abandoned for some reason. Malatesh and I realized Ravi was a superfast climber. He walked as though this was plain land while I was panting and sweating like crazy. 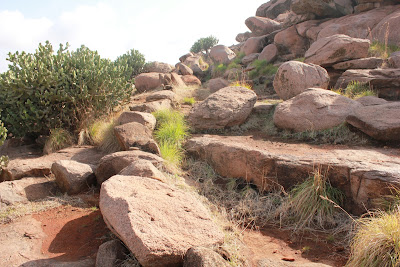 Malatesh and Ravi pose before a boulder art. Badami, Koppal and Anegundi are few places I know where one can see such delicately balanced rock formations. 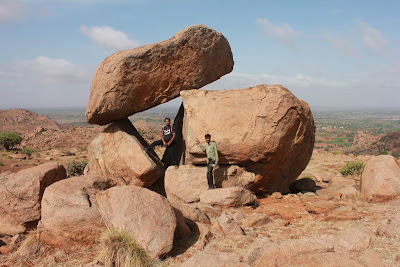 We reach the summit and come to the edge of a cliff, Koppal town comes into view. 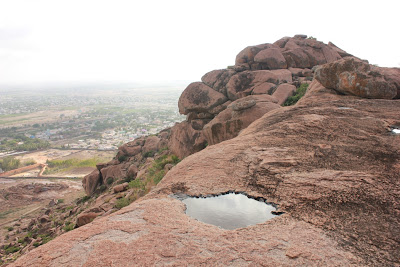 We reached the hill top but where is PalkiGundu? Important hint: its right at the edge of the hill, visible from the road below. Let's move ahead and check on the left. A little further, we could see a rock shelter. We decided to check it. 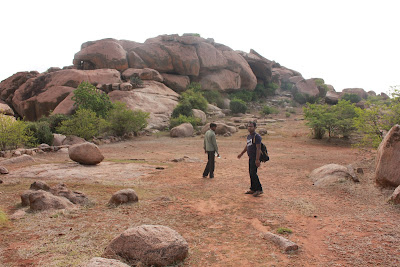 An ideal spot for monks to meditate. Malatesh is sitting cross-legged next to a doorway to an inner chamber. 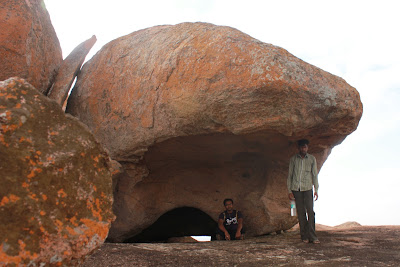 It was really comfortable sitting here. Right next to Malatesh are two pairs of feet engraved on the floor. 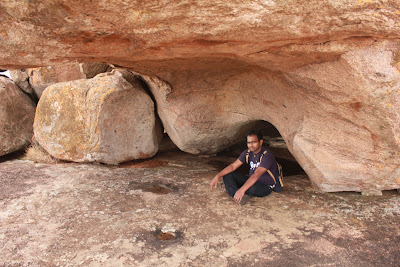 These are Jain images. Perhaps Jain monks mediated here. Similar engraving were found at the hooded rock shelter with Ashoka's edict behind Gavimath. 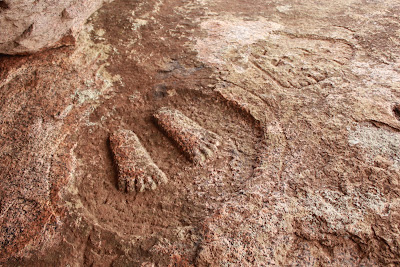 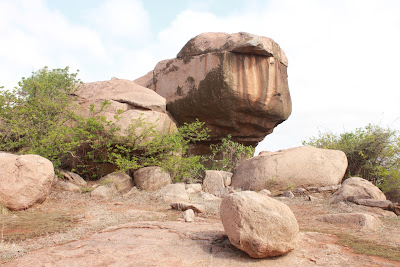 When we were here, either Ravi or Malatesh saw a painted arrow mark on one of the boulders. We move in that direction. 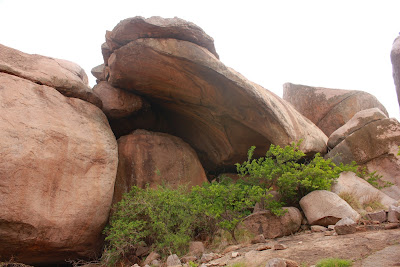 Yeah, found it! This massive rock is a wonder... see how its balanced on two ends. Ravi was the first to go up... 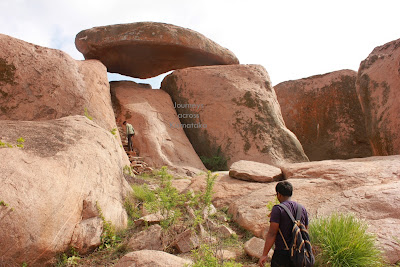 ...followed by Malatesh. Close to where I stood was a stub & base of a metal stand. Perhaps a board was placed here for easy identification. I wonder when people learn to respect public property. 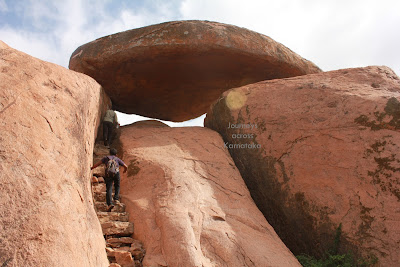 The rock is a massive umbrella, convex top and concave underneath. Malatesh and Ravi standing just outside the shelter. See left of Ravi- how small the contact patch is. The other end is about the same size. Three feet to Malatesh's right is a 30 feet vertical fall. Monks love heights and edges. 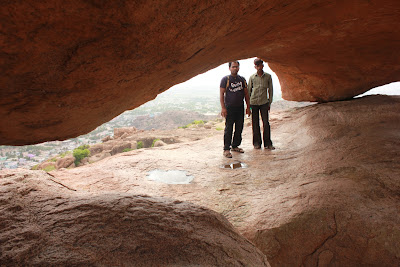 "OK, lets look for inscriptions." Nothing but a pair of concentric circles was found- marked A in this photo. The board at Gavimath edict had mentioned that Palki Gundu inscription has faded. 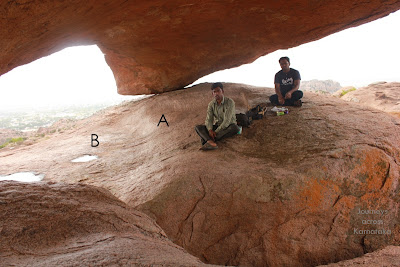 I cross over to this side to check for the inscription, remember telling Malatesh that you need trained eyes :) B is the position of the inscription.
The other end of the rock, contact area is larger here. This truly is a wonder. 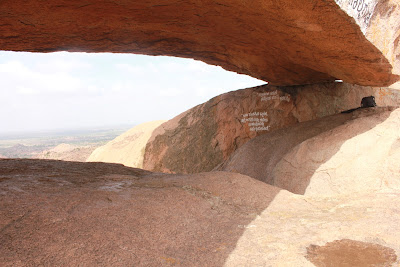 When seen from East, a pair of feet are visible within the circles. 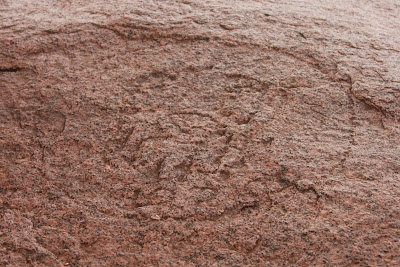 Part of Ashoka's edict of peace in Prakit language. 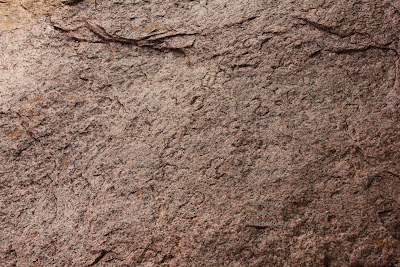 A closer look at the text. 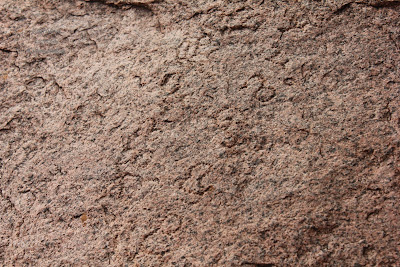 I'm standing just outside the rock umbrella; Koppal fort is out of view. The fort wall we saw on this hill earlier during the climb continues beyond the stretch of massive boulders we are standing on. The wall continues eastward next to the pond in the middle of the picture. We had gone down there to explore the plateau. I remember during my previous visit to Male Mallesvara temple, one of the locals had mentioned there are ancient shops here. We couldn't find any structure but this place certainly looks like a nice place for group of people to inhabit. 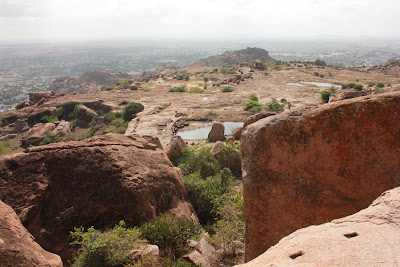 I come back inside and get a shot at Koppal fort and the small dark mound just above it is Bahadhur Banda fort. This hill gives a good view of Koppal fort, a boon for enemy commanders. I guess this was the reason for planning a fort on this hill. 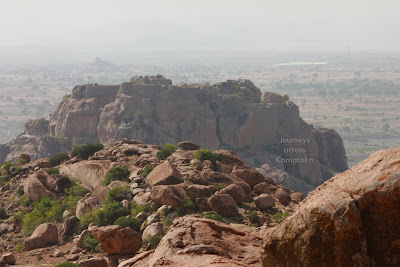 This rock formation resembles the Akka-Thangi rocks of Hampi. These rocks are attractive but dangerous at places. Happy about having seen Palki Gundu we decided to head back. Descending was less tiring but we had to be careful. 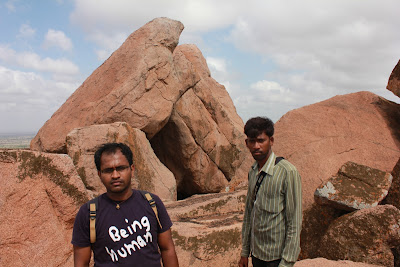 These hills are a source of stones for construction activities, we could see plenty of small scale quarries. Back at Male Mallesvara Devastana, Malatesh and Ravi went in. On the way back to Koppal, while still on this hill Malatesh noticed a Uda, a monitor lizard. We both got out of the car and a got a good look at it but slipped into rocky gaps in seconds leaving is no chance to get a shot. The grey colored scaly skinned reptile was less then 2 feet long with long claws jutting out from small feet. I was trying to imagine how it would be scaling vertical faces during nights. Ravi missed it completely. We were trying to explain how soldiers used Uda to scale hills and enemy forts.

We stopped on NH63 to get a shot at Palki Gundu. It doesn't look like an umbrella from here. 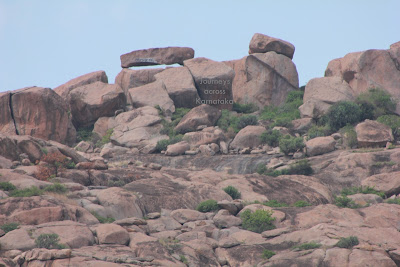 We had breakfast at Koppal and move towards Anegundi in search of Onake Kindi, a prehistoric site with rock paintings.

Thanks for the info . Lovely pictures and wonderful narration .

Nice description !! thanks a lot for the info !! today morning i visited palki gundu.. it is in very bad shape now.... i could hardly find only one line of inscription !! did u climb the hill from male malleshwara temple side ?