March 17, 2012
Anegundi = Ane + Gundi which translates to elephant + pit. Anegundi is on the northern bank of river Tungabhadra while Hampi occupies the southern bank. It is said that royal elephants of Vijayanagara empire were brought here for bathing, hence the name Anegundi.
Anegundi, Anjanadri hill, Rishyamukha and Pampa Sarovara are within 5km of each other. All these places have referred to in Ramayana. Anegundi is believed to be the monkey kingdom of Kishkindha. Anjanadri hill is believed to be the birth place of Hanuman. Rishyamukha hill is where Sugreeva lived and Rama & Laxmana meet Hanuman on this hill. It is believed that Rama and Laxmana had bathed in Pampa Sarovara.
Anegundi is said to be 3000 million years old, hence its one of the oldest plateaus on Earth. Anegundi is rich in Neolithic history. Two well known neolithic sites Moremane and Onake Kindi are within 10kms of Anegundi village. Moremane aka Mourya Mane is a Stone Age colony of several stone structures with paintings. Moramane is a prehistoric human settlement where one can find evidence of human activities spread over Microlithic, Megalithic and Neolithic ages. Anegundi village itself is a living heritage site. 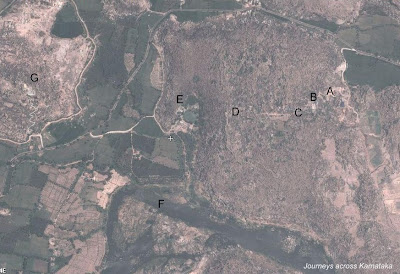 
Anegundi fort is spread over a large area enclosing Anegundi village and most of Rishyamukha hill. The fort would undoubtedly be the most formidable one because of the hill's terrain. Rishyamukha hill resembles a heap of massive boulders, boulders measuring 10' to 50' in length and weighing hundreds of tonnes. The gaps and chasms between the boulders are deep and treacherous. The unfriendly terrain itself can deter enemy advance over the hill. I wonder if anyone ever tried scaling this hill during night?

Here it is- the impossible fort Anegundi. These are the steps leading up to the fort gate. 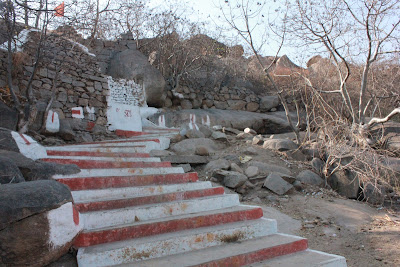 There's the entrance, a narrow doorway. Perhaps this was one of the inner gateways. 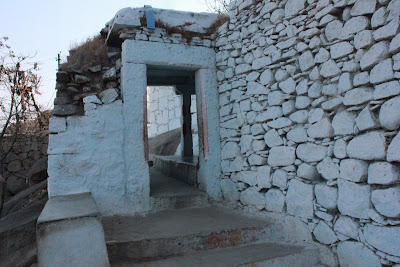 Looking back towards the gateway; right next to it is Hanuman temple. 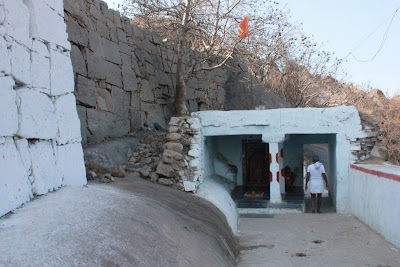 Unlike the newer forts the bastions here are squarish ...sharp corners. A right turn between the walls- we had entered the fort. I believe this is the inner fort. 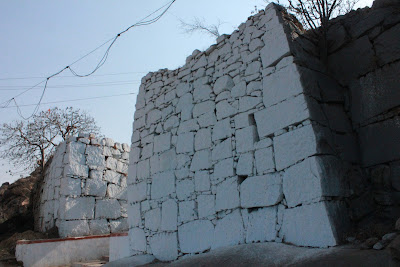 Durgadevi temple. Besides the temple there are couple of single floor buildings- Kalyan Mantap and a kitchen. The open space around these buildings are paved with stone slabs. Well maintained. 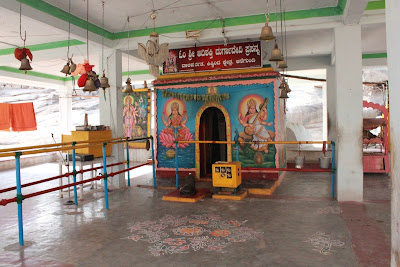 We go past the buildings and step into a dirt path flanked by tall rocks walls. A short walk and we are standing in front of this unique gateway.Two tall turrets to guard the innermost for. 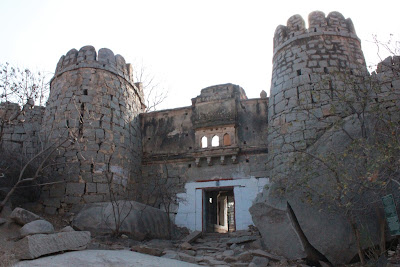 The other side of the gateway. Architecture seems recent, could be constructed during one of the Muslim rulers reign. Behind me flat open space with a royal tomb to my right. We walk up the narrow path towards ruins at the end of the path,. 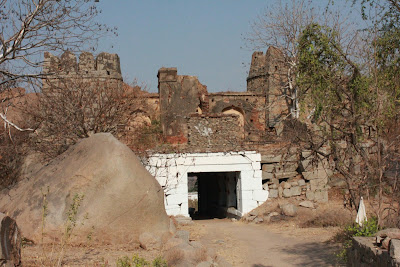 We go past this towering rock formation. Perhaps this was used like a watch tower back during Vijayanagar era. 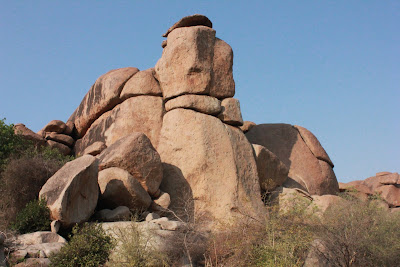 A Kalyani ~ stepped well. An open well on a rocky hill. Amazing isn't it? 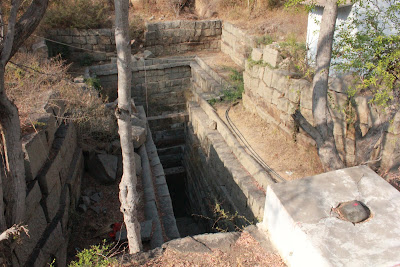 That's Ravi the cabby. He's peeping into the ruins. This might have been a house for one of the kings' commanders. Looking at the walls, architecture seems recent. Reminds me of buildings in Tipu's forts. 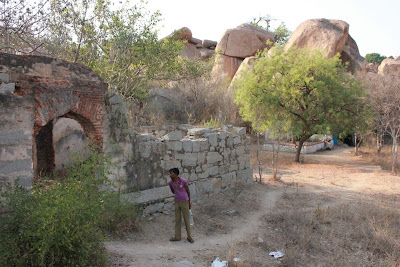 Rishyamukha hill is a heap of boulders.Some boulders are up to 40 feet long and 10 feet thick. The gaps between the boulders varies from few inches to several feet. Some of the chasms are deep, dark and dangerous. While walking on these boulders one needs to be alert. One careless step situation can be unthinkable. 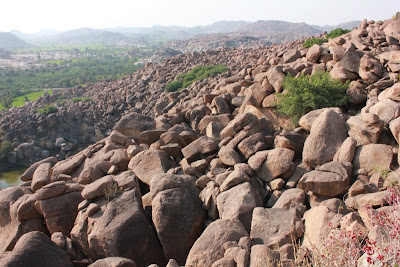 Now, imagine how military leaders of those days chose this hill as a site for a fort. I wonder how workers built a wall on this heap of boulders. And the wall has been standing for centuries. Surely his is a unique fort, the only one of this type I've ever seen. People who designed and built this are amazing builders!! 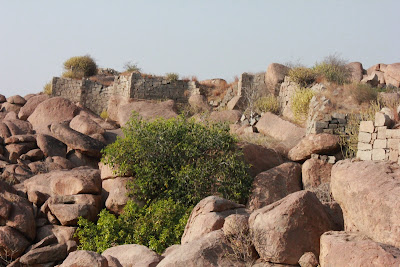 Path on the wall is barely 8 feet at the widest and barely couple of feet at some places. 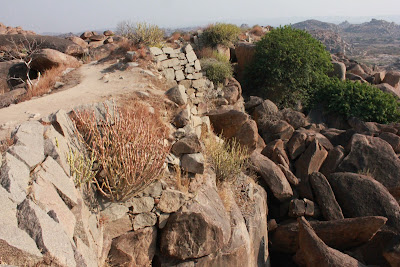 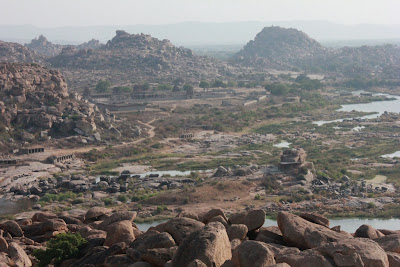 That's Pampa Sarovara & Shri Vijayalaxmi temple. And the big bump on the horizon is Anjanadri Betta. 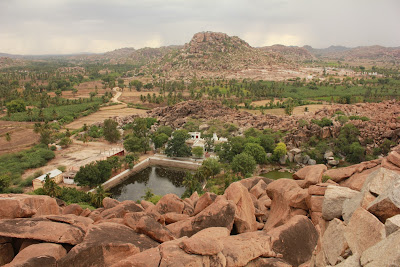 Part of Rishyamukha hill and the fort as seen from Anjanadri Betta. 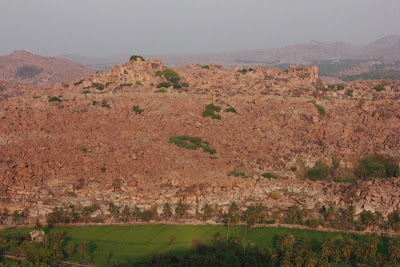 Talking about chasms, this is one of the deepest I saw. It could be about 40 feet deep. A giant anthill stands on the floor of the chasm. to go down there one has to climb down these rocks. Risky business. 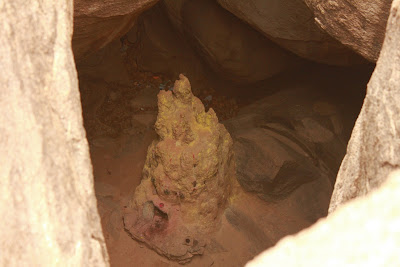 Fort wall is crumbling at places, care needs to be taken. This important historical monument surely is need of protection. 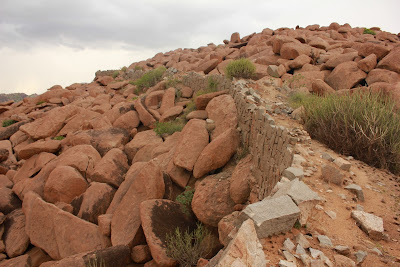 Back at the Dugadevi temple, the temple priest showed us the Goshaal ...cattle home. The herd is a mix of Jawari cows and Hybrid cows. Priest posing with a Jersey calf. 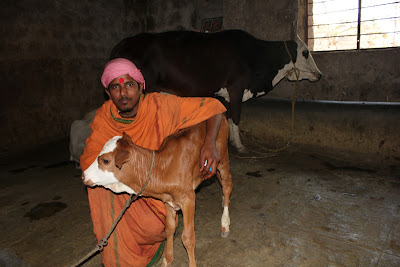 The temple has a Gurukula where boys from surrounding villages live ans learn temple duties. This boy was very enthusiastic about showing the Goshaala and the calves. Behind the little swami is the crumbling fort wall with a calm looking down at us. 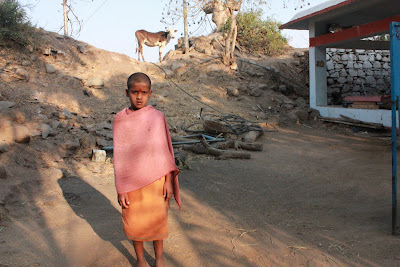 A video of Anegundi fort.

Ane + Gundi, elephant pit is not appropriate name to this place. It should either be Ane + gonde (which means Elephant hill) or Ane + gondana (Elephant herd). On thd top of the hill one can come across a large beilding, which is learnt to be the 'Anelaya'.

Nice piece of information. Is there any climbing involved as such?
Or there are steps till the end?

@Sathyanarayana - going by your reasoning the name Anegundi may be corruption of Anegondana. However, I remember reading that neighboring riverbed was the place where elephants were bathed, hence the name elephant + pit ~ ane + gundi.

Steps end at the temple complex at the fort entrance. Than on its just dirt track, more or less level walking.