The previous visit to Kalyana fort was 2003 with Praveen. It was a Friday. We were lucky the caretaker let us into the fort but told us to be quick. A group of school kids tagged along, they knew every part of the fort. The tour concluded with one thought: Basavakalyan fort was a well maintained monument and it has a neat little collection of cannons. I must come back.

Jan 26, 2011
This time I had a larger company; Praveen and two more uncles. We had driven from Bijapur via Gulburga and reached Basavakalyan late afternoon. We were at the fort gates about an hour before closing time for the day. View of the forts courtyard; a mosque, a Durbar hall, barracks and stables. In the center is a square pond with a fountain at it' center. This picture was shot atop the gateway to this complex. The gateway could be three or four floors high with a narrow stairway connecting the floors. 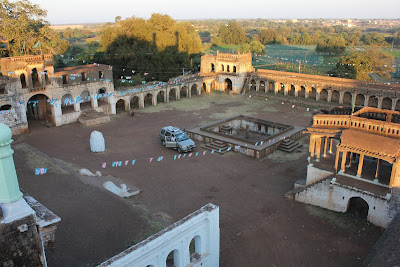 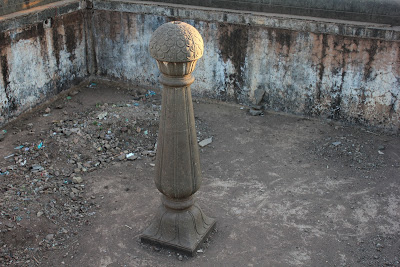 The fort with a moat. 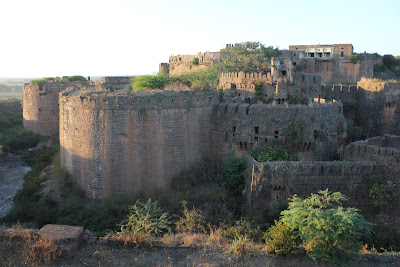 Basavakalyan was known by the name Kalyana until 1956. The name Basava was added to Kalyana to cherish the memories of Jagadguru Basavesvara. Kalyana was Western Chalukya's capital from 1050 to 1195. After the fall of  Chalukyas, Kalyana was ruled by Kalachuris, Yadavas of Devagiri, Adilshahis, Bahamanis, Mughals and Hyderabad Nizams. In the 12th century during Kalachuri's reign, Basaveshwara served as a prime minister in King Bijjala's court. Basaveshwara's acts of social reforms created enemies from orthodox subjects of Kalyana. False information and fear of an uprising from the orthodox community led King Bijjala to banish Basaveshwara from Kalyana.  Basaveshwara left Kalyana in 1196 and moved to Kudala Sangama where he attained Samadhi. 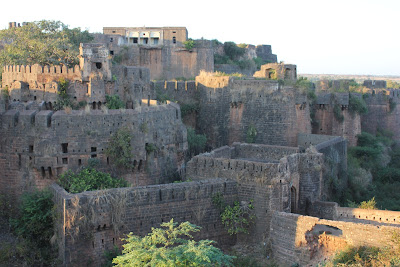 The mosque-durbar complex was much cleaner during my first visit. Anyway most structures are still in good condition. I was eagerly looking for a stubby cannon close to the mosque's steps. I learned that it was moved to the museum. The museum is just outside this complex.

A narrow path between the mosque (right) and barracks (left) leads to the fort gate. The gate is behind me. 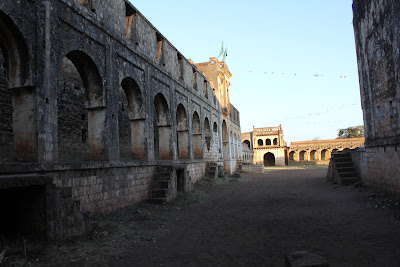 That's the fort gate. Perhaps during its hey days, a draw bridge existed. 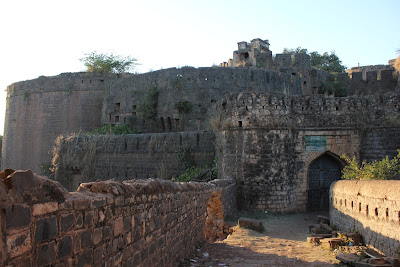 This is the bridge across the moat. A large hole in the wall gives a peep at the dry moat bed. A heap of ancient sculptures dumped along the wall. 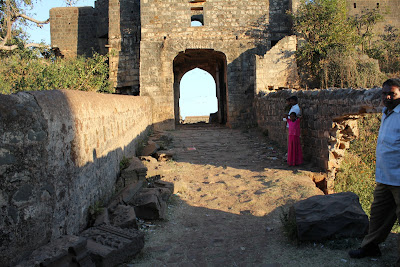 View of the fort as you pass the main door. A long row of cannon balls lie in rain water drain. At the end of this curved path, to the right is a temple. 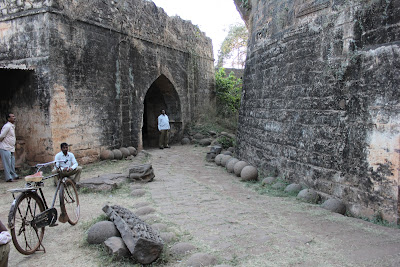 During 2003 visit I do not remember seeing plants hanging out from these walls. I feel these walls have a touch of Maratha architecture. 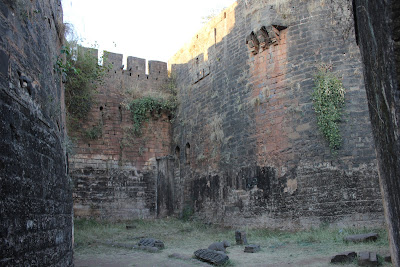 A long cannon similar to cannons in Gulburga fort. 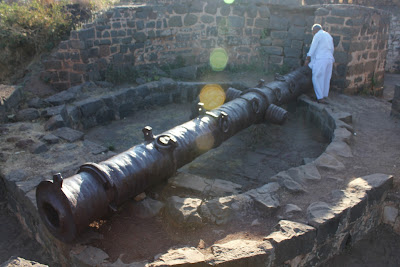 The fort has multiple levels. All through the fort you get to see flights of steps connecting different levels. Within this fort is a small temple, a small mosque, royal halls, courtyards, bastions and turrets. One can loose way through the maze of connecting doorways. One of the many courtyards within the fort. 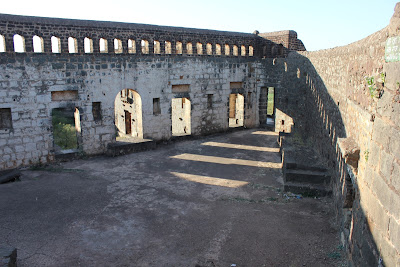 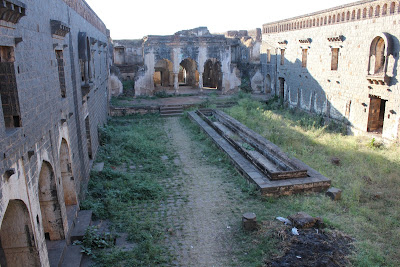 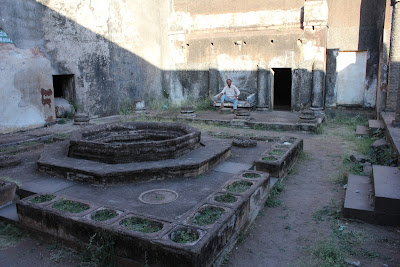 These are the three doors to Raj Mahal. 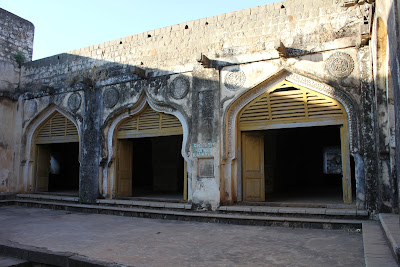 The interior of Raj Mahal. 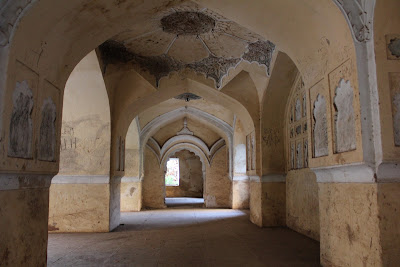 Floral art on the ceiling. Perhaps a chandler hung from the center. 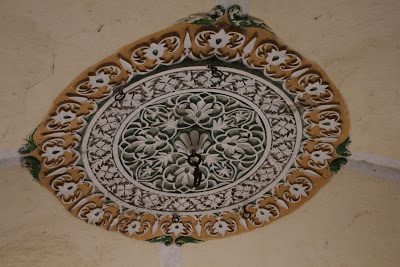 Courtyard in front of Raj Mahal. 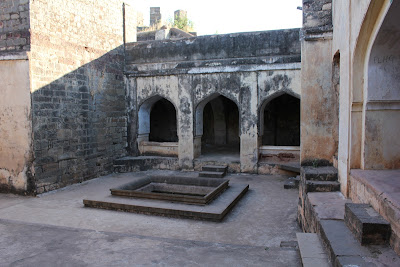 One of the junctions in the fort. Ignorant people leave behind their ugly signatures. 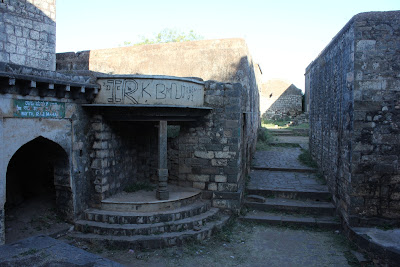 This is marked as a temple. I do not remember seeing any idol inside. 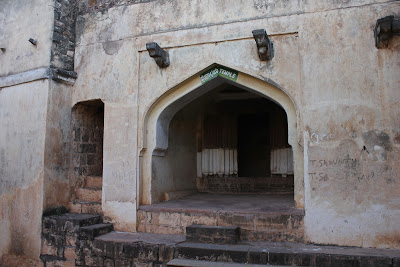 We move to a turret at the highest level of the fort. In the turret is Tadak Bijli Tope, a beautifully decorated cannon ever seen. It's condition is as good as a new one. The swivel and the hinge work well. 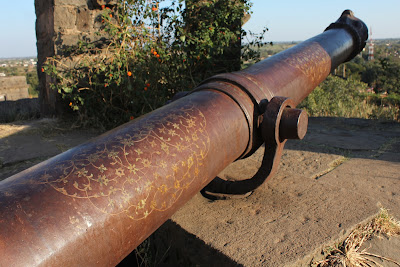 A closer look at the floral pattern on the barrel. 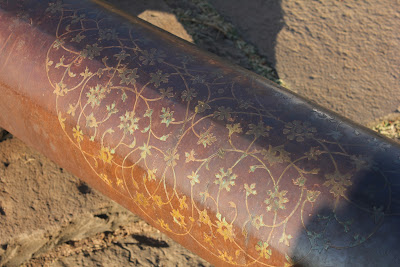 Tiger's head at the firing end. Notice the decorative brass lining running along the edges. Teeth bared and tongue sticking out as it lets out a roar. 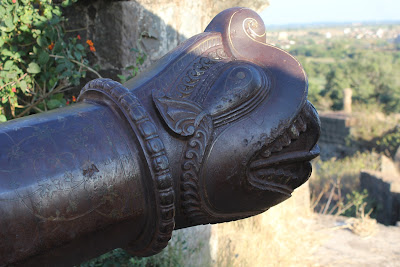 The bore diameter could be 2". Effective range could be any where between 400m and 6000m. 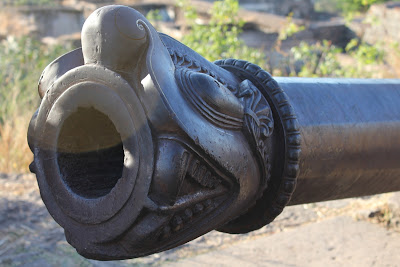 The eastern side of the fort has open space with turrets at equal intervals. Each of the turrets had a cannon each. This one is purely functional. 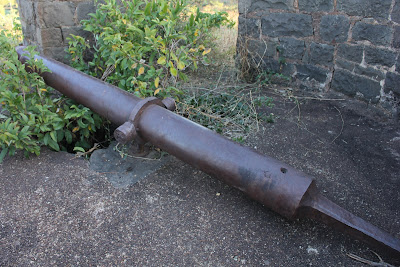 The next turret had a artistically designed cannon. The cannon sported twin fish-shaped handles on its body. See second picture from the last in Basavakalyan Fort post. This time unfortunately the path to the turret was  blocked by thorny bushes. I tried to find a way past it but the branches were unyielding ...I wish I has carried a machete. Anyway, I managed to take a long distance shot from the mosque complex gateway. One of the handles is broken and missing. 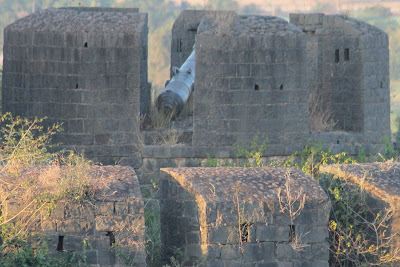 This is perhaps the largest bastion within the fort. The balcony could be for the king to sit and watch the happenings down below. To the right a white structure is seen. I think the guards here told me that British  army officers used that portion as their office. 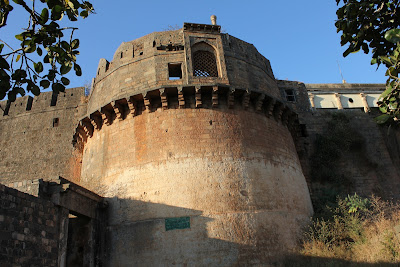 The animal face in the lower part of the picture reminds me of a elephant head in a water tank in Gajendraghad fort. A Maratha touch to Kalyana Fort.. 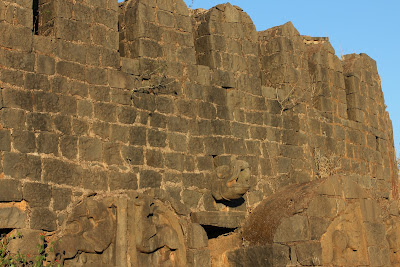 Eastern side of the fort. A fort which has seen additions with every change of ruler. I hope it wouldn't be wrong to call it a fort of multiple architectural designs. 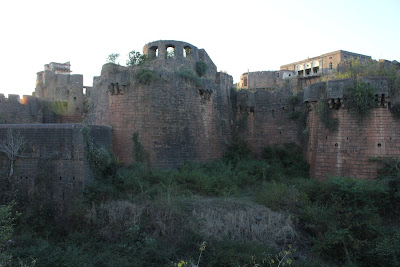 By the time we finished with the fort, the fort museum had closed. Aagh! I wanted to see the two cannons so badly. We went to Basaveshwara temple and then we headed towards Bidar.