Though I has visited Aihole three times before this visit i had not really discovered the prehistoric burial site. I had walked over the fort wall on Meguti hill yet I had missed the megalithic tombs. Some time early this year I learned about the tombs.

Malatesh, Raju and I arrive at Aihole by 5PM. Since Malatesh had not seen Ravanapadi rock-cut temple, we stop there for some time. While Malatesh sees the interior I climb up the rocks to check few rock shelters for paintings. No, no paintings here. That's Meguti temple atop the hill and behind the temple is our destination- a prehistoric burial site. 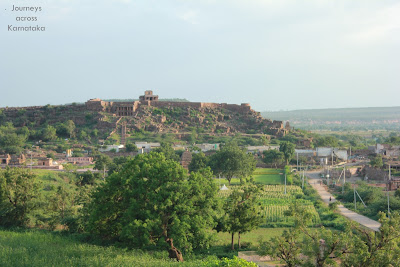 This is a Google Map screen shot of Meguti hill. The plateau measures about 600m long by 200m at the widest point. The burial site is about 500m long. 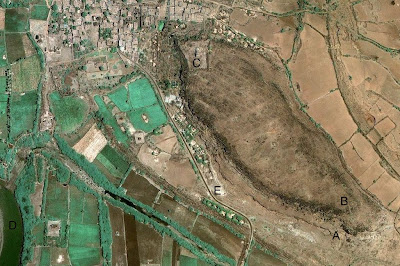 We park the cab close to Jain Basti, unfortunately Malatesh will not be able to see the inside because its doors are locked. OK, lets climb the hill. We go around the temple and find a way up the hill, just a minutes climb we reach the plateau, it slopes up gradually towards the temple. On the left is Malatesh and Raju on the right and in the middle is the first tomb, very close to the edge of the plateau. Just behind Raju is a rough cut steps through a passage.. I felt that was the burial site entrance. 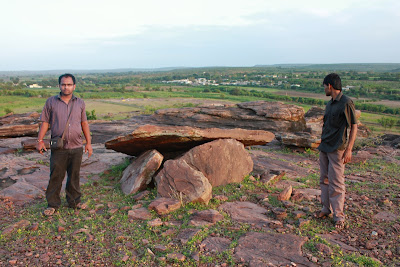 The slabs are rough cut. The design is primitive compared to tombs of Hirebenakal. In this particular tomb the vertical slabs measured approximately 3' x 2' and the cap-stone about 5' x 5'. Thickness of the slabs were 6" to 8". 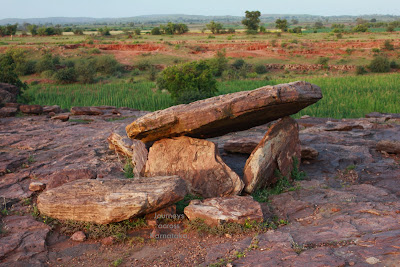 Tomb sizes were not uniform but we definitely saw improved designs. Some tombs' slabs has straight edges. Like the one below, it looks well made. However most tomb were vandalized. Obviously treasure seekers. Raju the cab driver was ever curious about our interest in these relics. At one point he asked what can be found if we dig under one of these tombs? His questions were beginning to irritate me ..grrh! 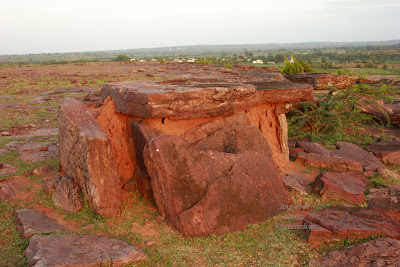 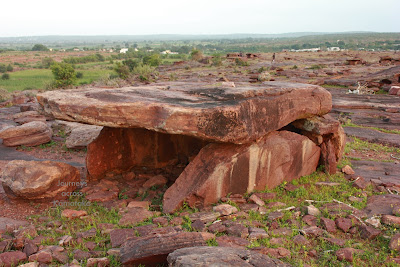 Perhaps, this was the shortest one, hardly a foot high. In the background is a well made tomb with straight edge slabs. 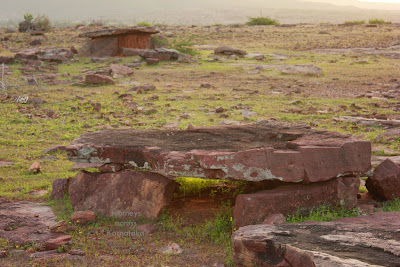 In the background is the fort wall. We are almost half through the site. I was not expecting so many tombs. This is surely a major burial site. 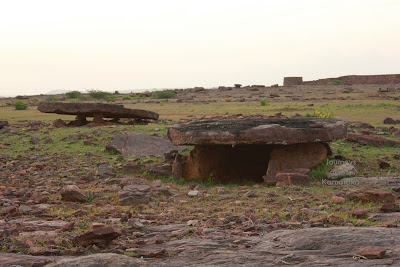 Really heavy cap-stone, it could be weighing around 400kg. 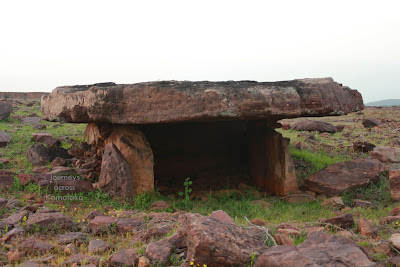 This design is quite developed. 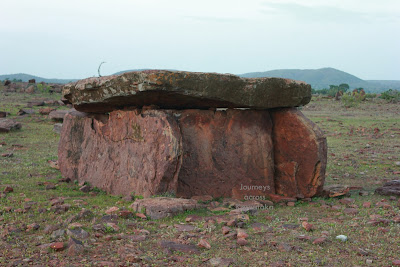 A primitive one. To the right you can see a tomb completely destroyed. 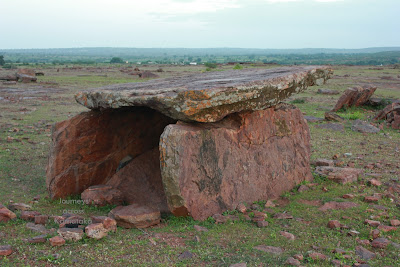 Inside of the same structure. 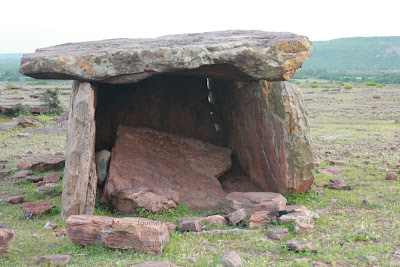 This is one of the larger developed tombs. 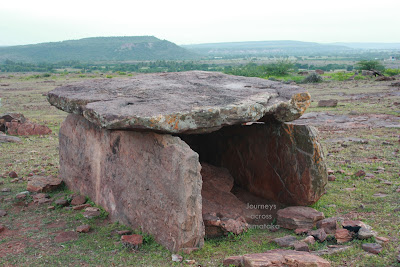 Perhaps this playlist if 3 videos will give you a better feel of the burial sites. Sorry about the poor quality, we reached late and it was a getting dim very fast.

This tomb is the largest in this site. The cap-stone must have weigh close to a ton. 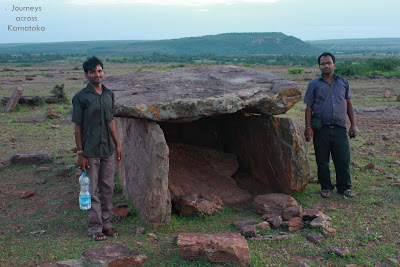 This is perhaps the largest of the primitive structures. 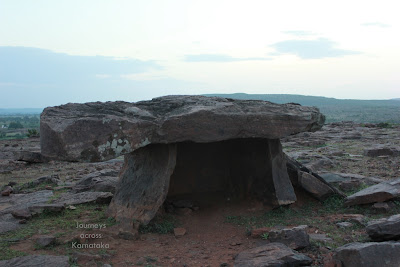 We could see layers in the rock bed we tread on. I guessed this was not just a burial site but also a quarry site. Slabs could be easily obtained here. I guess the two slabs were unused pieces lying here for centuries. 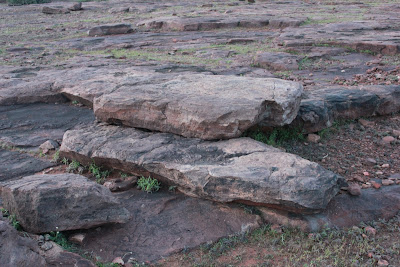 This is a really thick slab. Unlike us men of those days should be really strong to handle such loads. 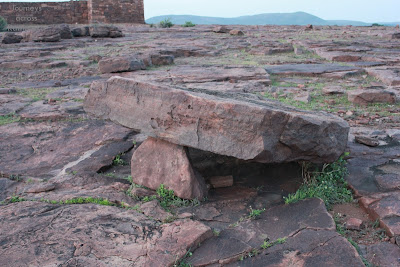 I am surprised there's not a single government board marking this important monument. Liked I mentioned earlier, majority of the structures are damaged. Luckily, most stones are heavy and that could be the reason these structures still exist. 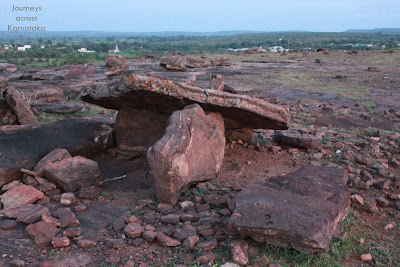 Sun had set long back, we slowly walked down the plateau taking a count of the structures; 80 tombs including the completely damaged ones. A thought occurred and I asked Malatesh "why is it we end up visiting ancient burial sites towards end of the day?"

The day hectic; woke early, traveled 160 km, trekked and climbed 7 hours, we were tired. Our plan was to reach Badami and camp there. Our plan for the morrow was to locate some prehistoric paintings in Hiregudda at Badami. On the way we stopped at Shirdi Sai Baba temple on the outskirts of Pattadakal.

I visited Aihole in the year 2016.But at that time I was ignorant about its treasures.In coming year I will visit it again with little bit of knowledge.