I have been researching Ashokan edicts in Karnataka for more than a year now. Here are the list of major and minor rock edicts:

Major Rock Edicts
Minor Rock Edicts
9 of 24 edicts are in Karnataka i.e. one major edict and eight minor edicts. My wish is to visit all 9 sites. So far I've seen 3 sites, Gavimath & Palki Gundu at Koppal and Maski.

December 25, 2012. This was the 4th day of our 5 day trip to Raichur and Yadgir districts. We had left Raichur by 6AM, stopped at Kavital to visit Tryambakesvara Gudi, had breakfast and arrived at Maski by 9-30. With help from locals, we found the monument easily.. a kilometer away from the town on Maski-Mudgal road. There it is, a large rock formation behind the tree. 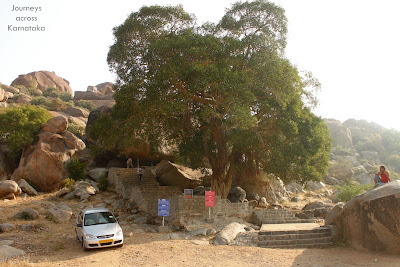 The monument seems well protected and maintained. The place has a peaceful ambiance. 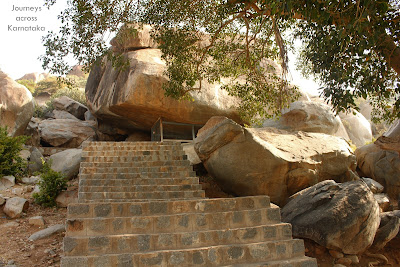 The boulder with inscription is inside the locked cage under the rock overhang. 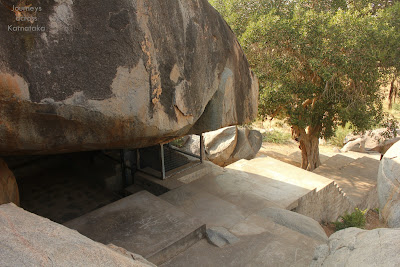 Its cool in here, very silent except for birds chirping near by and sounds from sparse vehicular traffic. 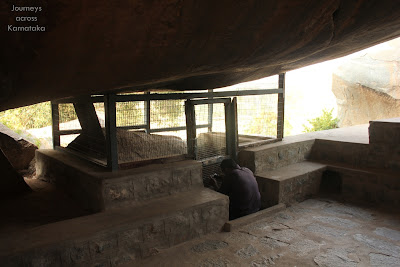 We struggled to take pictures of the rock. We found a gap in the mesh wide enough for our camera lenses to peep through. 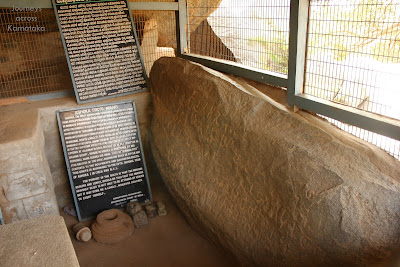 There are two boards giving out some basic info about the inscription. Here are the transcriptions of both Kannada and English boards:

Ashoka, the great Mourya king of Magadha, ruled his vast empire from Pataliputra (modern Patna-Bihar) between Circa 273 BC to 238 BC. He embraced Buddhism eight years after his coronation immediately after the conquest of Kalinga involving ruthless massacre and deportation of thousands of human beings. As an ardent devotee he propagated Buddhism by engraving his proclamations on rocks and pillars in regional scripts and dialects then prevailing in the country in the boundaries of his empire. Among the many edicts (the other being the one recently discovered at Gujarra in Datia district of Madhya Pradesh)  Written in Brahmi script, where in Ashoka is mentioned by his personal name besides his usual title of "Devanam Priya" (the beloved of he gods) resembling both in style and contents to the Roopanath and Sahasram edicts. This edict is assignable to the 13th beignal year of Ashoka (in Circa 260 BC).

The purport of the edicts is that the persons exalted and lowly, should be told that the immense heavenly bliss is not only to be attained by exalted but it may even be a lowly, whoever chooses to exert himself. 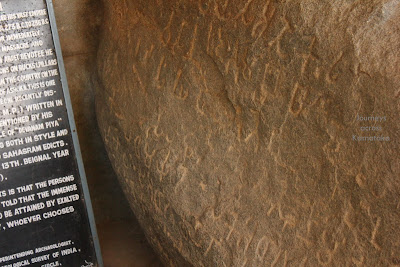 A closer look at the letters. It's evident parts of the boulder have chipped off. 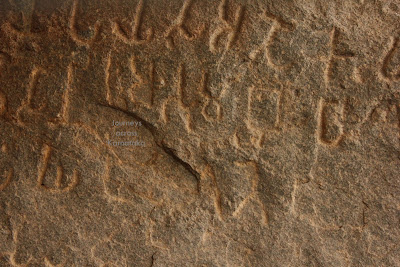 I recall Shilpa's help in providing information on Palki Gundu edict. I get the epigraphy notebook again. Following is the extract from Shilpa's notes on Ashokan edicts.

Like the Rupnath, Sahasram and Bairat edicts Maski is also a damaged version which was discovered on 27th January 1915 by C Beadon, a gold mining engineering in the neighborhood of Maski, a village in Lingsugur taluq of Raichur district of the Nizam's dominion about 46 miles West-SW from Raichur. C BEadon sent a message to Rao Bahadur H Krishna Sastri in Archeaological Survey of India (ASI). then J Fleet and B L Rice also visited the place and published in Royal Asiatic Society (RAS).

Since Ashoka's inscription was found near Maski, it must have been a notable town. Maski was an important place because it was the capital of many dynasties.

In the Chalukyan inscription of the time of Jayatekamalla in Saha 949 its called "Rajadhani Priya - Mosagi" i.e. the royal residence of great Mosagi. Another inscription by the same king of the village Brahmapuri of Mosagi. A later record of the Yadav king Singhana of 13th century calls the place again "Rajadhani Priya - Mosagi." In two other inscriptions of this place belonging to the reigns of Achyutaraya and Sadasivaraya, its name is mentioned as Mosage, the chief town of Mosage-nadH Krishna Sastri gave a careful transcript and translation of Maski inscription (with plates) in Hyderabad Archealogical Series No.1: The New Ashokan Edict of Maski 1915.

The cavern in which the  inscribed boulder stand is formed by a huge rock resting at various points of its periphery on other smaller ones, some of which are partly buried in the gravelly soil below. The boulder, which is a block of crystalline grey granite of irregular shape stand at the southern entrance into the cavern, with the writing facing inwards. The surface of the boulder has peeled off at various places sometimes right into the depth to which the letters was incised and measures roughly 8' 9" by 5'. The chief interest of the Maski inscription consists of the fact that the king is not only called Devana Priya but also Asoka - a name which was hitherto known only from Buddhist litreature and Puranas. 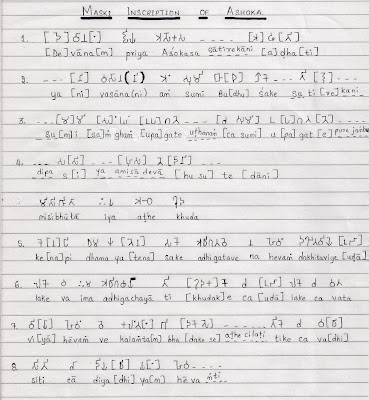 Translation:
A proclamation of Devanampriya Ashoka. He orders thus: more than 2½ years have passed since I am a upasaka. A year or more back (I was not very zealous). I am devotedly attached to Buddhists clergy. I am after visiting the Sangha. In that period (formally in Jambudhipa those Gods did not mingle with people with people are mingling now.It can be achieved by the low born also if they are very much associted with dharma. Gods are not connected only to the (uda) high class people but also can be achieved by (khudake0 poor man. cavataviya - it is told that both. if you follow my proclamation both can achieve the goal. If you follow this it is going to go o increasing abd become everlasting.

As we were about to leave, a local lad turned up. We got introduced, his name is Prashant Devreddy Achappanavar, a PUC I student. He had come here to read his college book in peace. He told us about the recently discovered prehistoric skeletal remains on this hill. I asked if he knows the spot, he wasn't sure, said its high up in the hill. then he told us about a protected monument close to this place, a mound just behind Devanam Priya college on the outskirts of Maski. We asked him he could show us.. yes :) 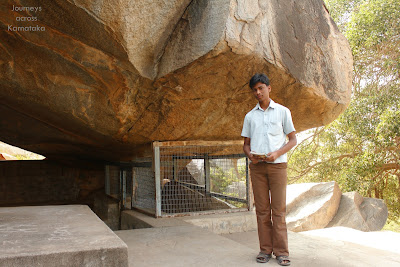 The college was just a minutes drive. That's the mound Prashant wanted to show us. Two government boards declare this mound protected. Prashant also told that this mound is related to Emperor Ashoka's era and government has imposed a ban on digging here and within 100' of this mound. That's Prashant and Mohan mama. 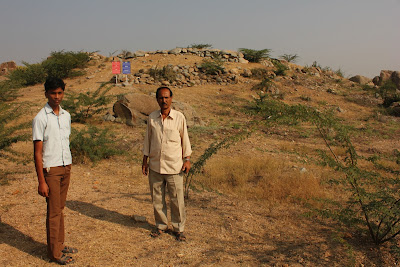 On the western edge is a granite boulder sticking out from the mound, on it are etchings of animal figures and text. 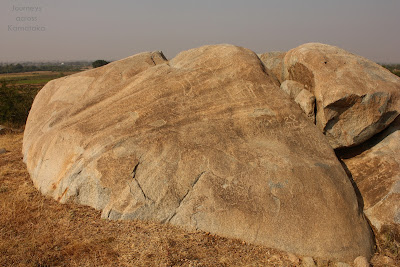 A pair of fish and some unidentified figures. 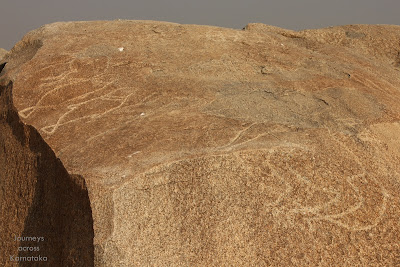 A square has been etched out but its blank. Perhaps, this was done for some message to be inscribed. 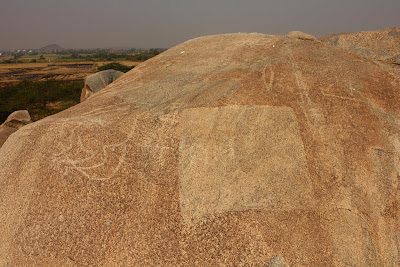 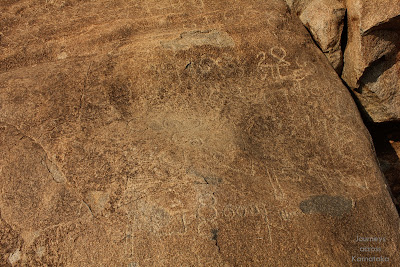 One of the drawings looked like a horse to Malatesh. 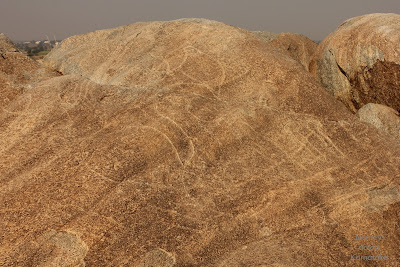 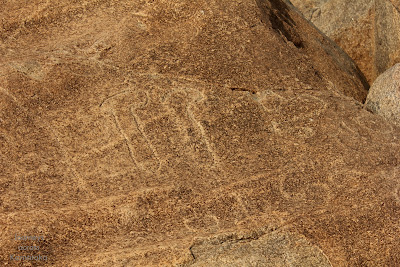 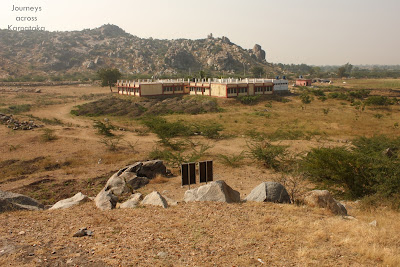 We thank Prashant and drop him off near the Ashokan edict and we continue our journey towards Mudgal.

Here's a video of the edict and the protected mound.

Have seen Ashoka's edicts in
Orissa , always wanted to visit this place and one in Bharmagiri, Chiradurga .

my email address is neevda@yahoo.com

The stone inscriptions found near the college is believed to be of Chola according todays vijay karnataka news paper Gangavathi edition .

That's a nice bit of info. Thank you TGS.