After Mulbagilu fort and Virupaksha fort, Avani fort was third on the list. Avani is about 10 kms from Mulbagilu. That's eastern face of Avani hill, the fort is located at the lower and middle levels of the hill, at the top is a shrine dedicated to Sitadevi, Lord Rama's wife. 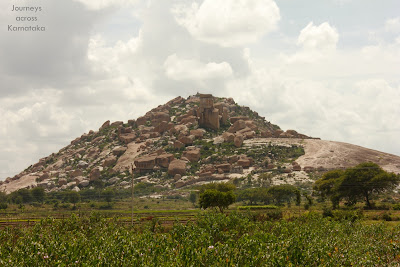 It is believed that Sitadevi gave birth to her twin sons Lava and Kusha here. Also Avani is the place where the battle between Lord Rama and his sons Lava-Kusha happened. Avani is also known as Gaya of South India.

It was past noon when we arrived at Avani, weather was warm and we here hungry. We chose to see Avani temple complex first, the easier option. According to sources these temples were built by kings of Nolamba dynasty. Nolambas were subordinates to Ganga and Rastrakutas.

That's the gateway to Avani temple. Notice how bright it is, flagstones are reflecting white light into our faces. However, once inside the structure weather changed drastically, it was cool and relaxing. 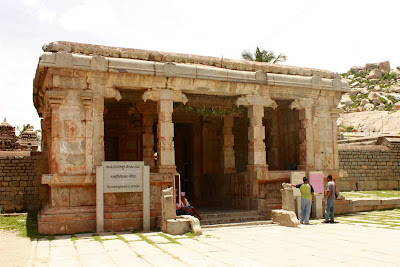 Structure to the right is the extension of the gateway and the structure on the left is Ramalingeshwara shrine. We did not enter the temple, instead we chose to go around the complex in clock-wise direction. 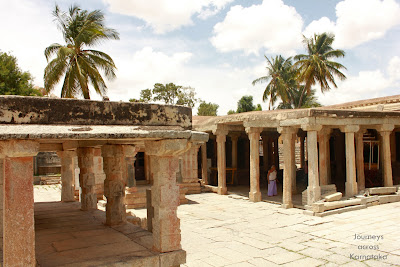 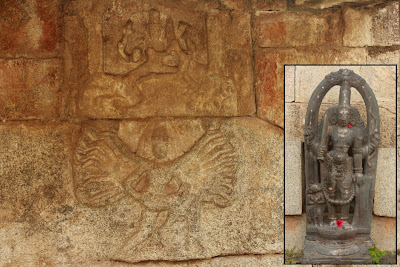 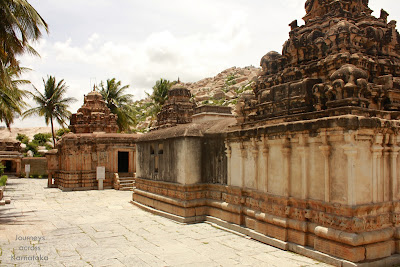 Transcript of the signage: Lakshmanalingeshwara shrine is assigned to Nolamba period of 10th Century AD. This shrine is most ornate in the complex. The temple on plan has a garbhagriha, an antarala and a navaranga. The navaranga has four pillars with relief sculptures and the ceiling has Ume-Maheshwara surrounded by dikpalakas. The linga in the garbhgriha is largest in the complex. the south mahadwara is of Chola period. On the extreme the adhistana has five mouldings, ornated with rows of kudus, frieze of elephants, lions, yalis and makara heads. the walls are relieved by pilasters and sculptures of Yakshas, Dwarapalas, Shiva, Bhairava, Bhairavi, Vishnu, Ganesha, etc. The brick tower is of late Vijayanagara period. 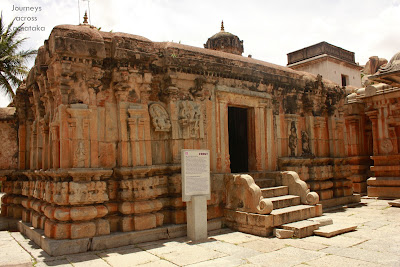 Transcript of the signage: Bharateshwara shrine is smaller and less ornate than that of Shatrughnalingeshwara. Its pillars resemble the manastambha with octagonal shape facing the Bharateshwara linga on the outside in the mantapa of four similar pillars sheltering a black stone bull. 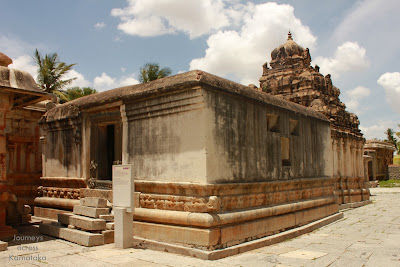 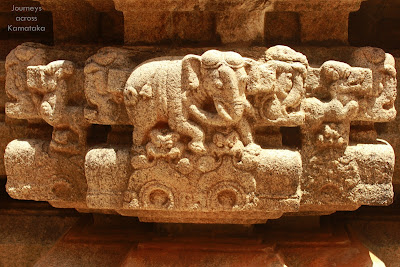 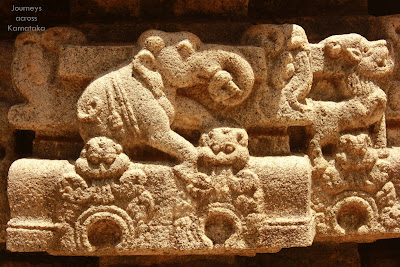 Compared to Hoysala architecture, these temples are simple. 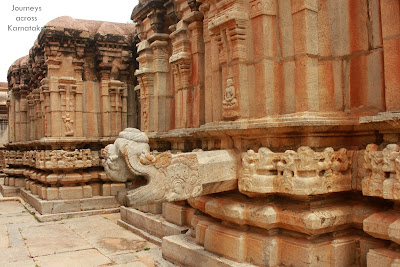 Transcript of the signage: Ramalingeshwara shrine on plan has a garbhagriha, an antarala and a navaranga. The pillars in the navaranga are of the ornate type resembles manastambha design. The adhistana has moldings decorated with kirthimukhas and lions. The walls have pilasters surrounded by Dravida towers. The Ramalingeshwara linga is of dark stone is smaller than the Lakshmanalingeshwara Linga. 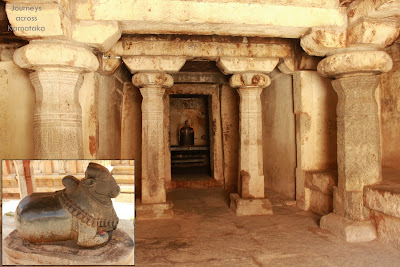 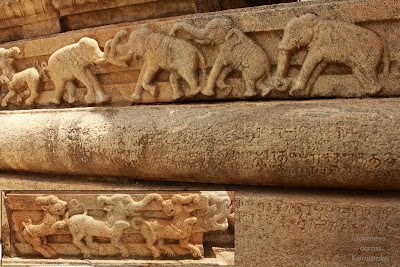 South-eastern view of Avani hill, as seen from the temple complex. 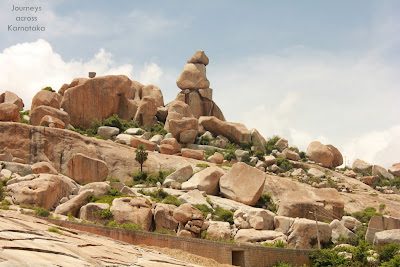 Pedestal with a circular sculpture, Ramalingeshwara shrine in the background. 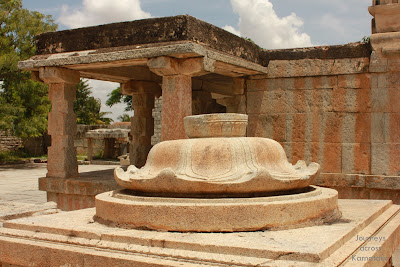 Tour of this temple complex was a rush, with tummies growling we had a quick tour. However, transcripts of signage provide some basic info.

Shatrughnalingeshwara shrine is nearly the same size and shape as that of Lakshmanalingeshwara shrine, but its basement has three cornices only one of which is rounded and another has rows of poorly carved lions. Its doorway is of dark strap stone and ornamented bonds with Gajalakshmi on the lintel. The upper wall of bricks and town are latest. The navaranga is similar to that of Lakshmanalingeshwara Shrine, the pillars are sixteen side shafts with floral hangings.

Ramanjaneya shrine looks closely like the Shatrughnalingeshwara except that in its basement and cornice, elephants are more prominent than horned lions, yalis and horses also appears.
Its navaranga has only the shape of an ardhamantapa with ceiling of nine padmas only. Its northern pierced screen has too finely shaped dancers.

Kamakshi shrine: The shrine with a garbhagriha, Sukanasi, an open ankana, navaranga and a porch. The only things noticeable here are the pillars which are of the sixteen sided and cylindrical type. The
two pillars in the porch have floral hangings and are round. the pillars in the shrine are brough from elsewhere and used for this building.

The gateway. Shivu the cab driver, Deepak and Gulli had parked themselves on a bench. 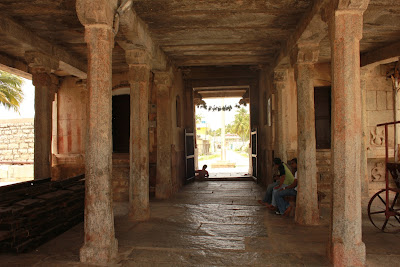 Actually, Gulli saw more of these temples in Deepak's Nikon :) 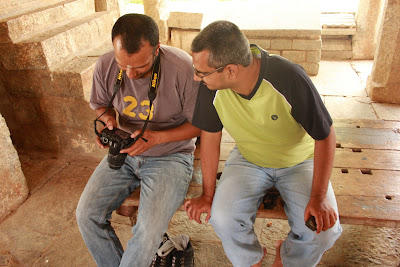 Drive to Mulbagal and finding a restaurant would be a 20 min affair, our patience had worn thin, so we decided to check for a mess in Avani. At the village square, we did find one.. can't recall the name. It was a small place, may be 8 tables, it was packed. We managed to get a table and ordered ragi mudde oota. The owner, a very active middle-age lady managed the crowd's demands very nicely. She was very particular about pronouncing the word Rasa. Even though we asked "Rasam beku" she would bring the bucket and say "Rasa, yaarig beku?" A staunch Kannadiga! We enjoyed the meal thoroughly.

We still had Avani fort on the itinerary but the idea of scaling the hill under the blazing Sun after a nice meal was not appealing. I said we'll come here again and visit couple of other forts too. We headed towards Mulbagilu in search of other ground level forts- Kaki Bise Gowda citadel, Kurudumale fort and Mandikal fort.