Muddenhalli to Nandihalli is a short drive. Cab driver Sudhakar suggested me to see the large Nandi about 4kms from Nandi Halli first and then see Bhoganandishwara Devastana. The Nandi stand alone in the valley between Nandi Betta and Channa Giri, right next to the road connecting Muddenhalli and Doddaballapur. The Nandi is almost the same size as the Nandi of Basavana Gudi in Bengaluru. Even though I had visited Nandi Betta several times somehow we had missed this temple completely. 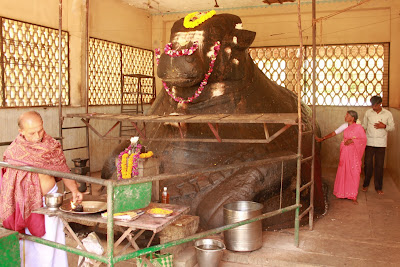 It was between 11 and noon when we arrived here. No crowd, it was peaceful. A small group of locals were discussing arrangements for Independence Day celebrations. 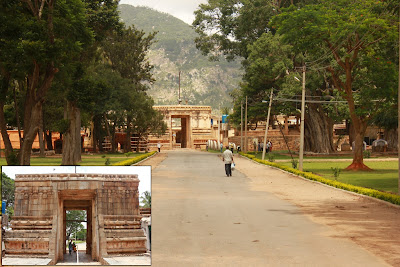 Transcript of signage at the temple complex entrance: The temple is perhaps the finest and the most ornate of the Dravidian temples in Karnataka. This is a twin temple side by side. The north one id dedicated to Bhoganandishwara and the south shrine to Arunachaleshwara. Each consists of a Ggarbhagriha, a sukanasi and a navaranga. They have two pierced windows opposite to each other in both the sukanasi and the navaranga. The four pillars of the navaranga of the Bhoganandishwara shrine are carved with fine small figures on all sides. The ceiling over them, about 7 feet square has astadikpalakas with Shiva and Parvati in the central panel. In front of the navaranga entrance is the Nandi mantapa. The outer walls of the north and south shrines have pilasters, turrets and pierced windows with a few figures here and there. The base has a frieze of elephants, yaalis and lions intercepted eith each other.Both shrines have fine sikharas built of stone which are mostly similar in design.

Between the two shrines is a small intervening shrine dedicated to Umamaheshwara. In front of this is a Kalyana Mantapa built of black stone very interestingly carved with creepers and birds. The temple is known for the sculpture of Herambha Ganapati, kept in navaranga of Bhoganandishwara shrine. The prakara has two Devi shrines, Vasanta Mantapa, Tulabharamantapa and a square stepped Shringi Thirtha pond. There is a Kalyana mantapa and a huge tank in the north, enclosed by a cloister wall. The prakara has two mahadwaras. The whole area measures 370' x 250'. Copper plates found at Chikballapur states that the temple was built by Ratnavali consort of the Bana King Vidhyadhara and records a grant to it in 810 AD.

Going back in time; the temple had good arrangements for travelers to stop and rest here. As you see here- a fresh water well and ample travelers' shelter along the outer walls of the complex. 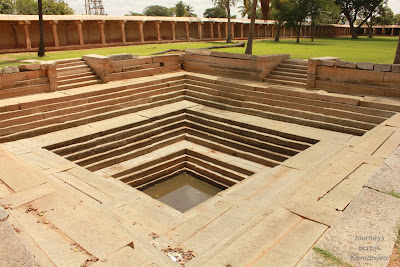 Close to the temple entrance is a raised platform called as Mahanavami Dibba. Unused wheels of the temple chariot. 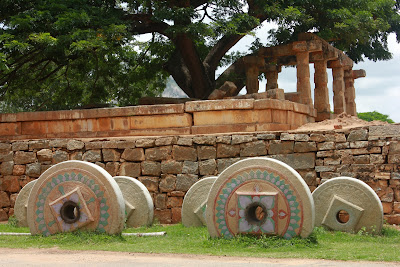 Inscriptions of names and images of important people who has visited the temple during its hey days. 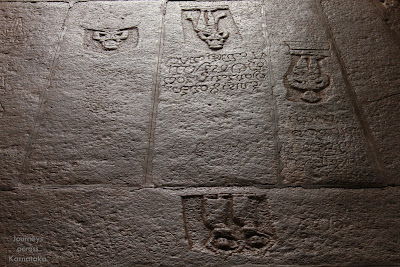 More shelters within the inner walls. That's Nandi Betta in the background. 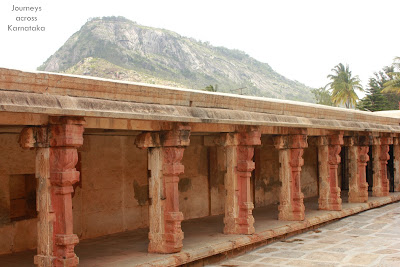 The temple is truly wonderful. These columns are on the outer side of the sabha-mantapa. 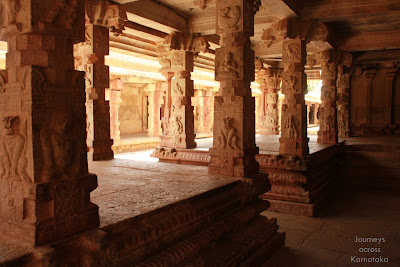 These columns are closer to the Garbhagriha. 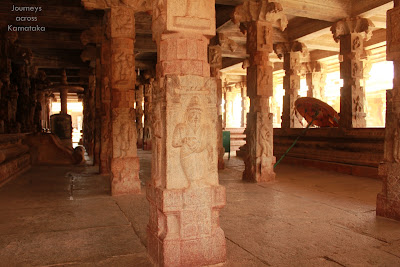 The twin Garbhagrihas are built on a raised platform. Columns on the platform are richly decorated with images of various gods, flora and fauna. 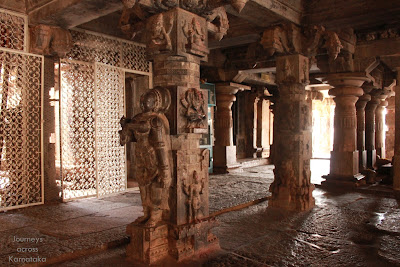 Outside it was hot but in the shade of the temple mantapa it was cool and pleasant. 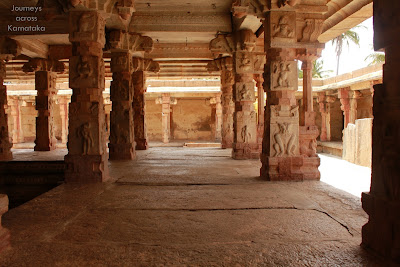 These columns seem to be in Vijayanagara architecture. 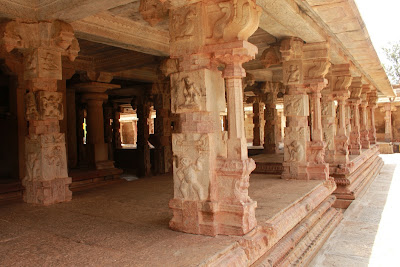 There's one object which is unique here- a stone umbrella! This is the first time I ever saw an umbrella made of stone. Within this mantapa are several inscriptions in Tamil. 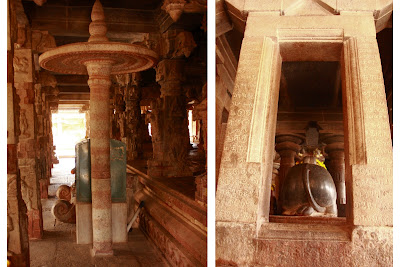 This statue of Ravanausra is attention grabbing. Ravana in his true form; ten heads and ten pairs of arms. 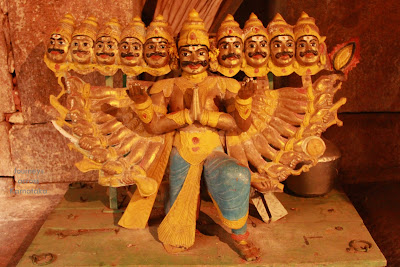 The Garbhagriha drain, looks like the character here is yawning. Anyway, the details in the sculpture are amazing; wavy and curly hair, the bangles and fingers are well formed. 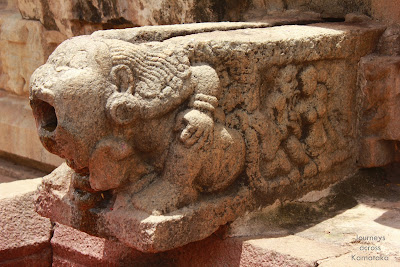 A granite slab with Telugu inscription. Window grill made of nine Ganas. 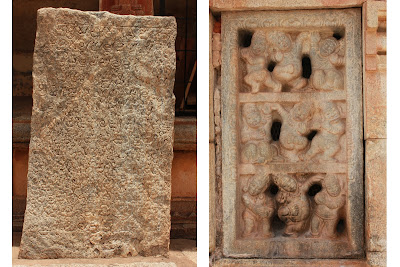 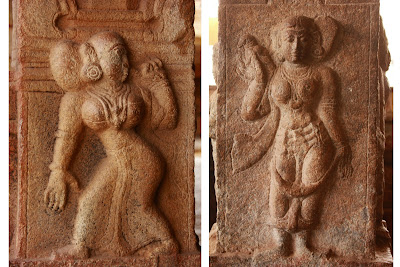 Man beating a drum, fingers stand out in the sculpture. The seated man seems to be making a clay pot. 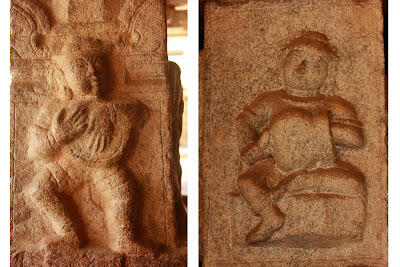 A plump woman and a slender woman. The latter seems to be holding a fish in her hand. 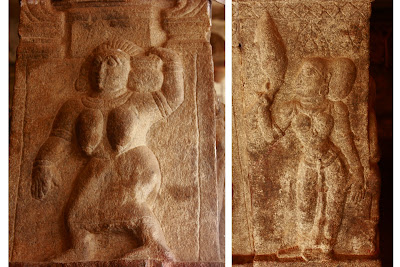 Not sure if this monkey figure depicts Lord Hanuman. The man holding an umbrella seems to be appreciating something. 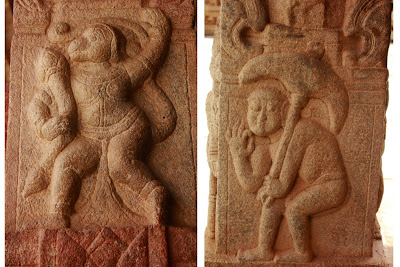 To the north of the main temple a gateway opens to a small enclosure in which are two Mantapas; Vasanta Mantapa and Tulabara Mantapa. 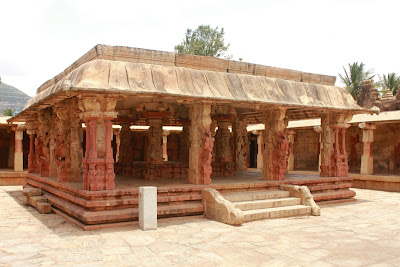 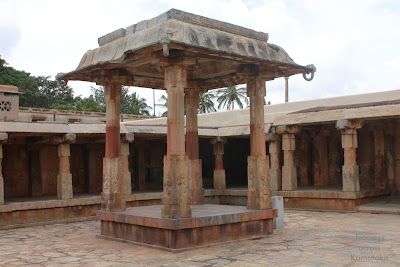 One more gateway to the north of the enclosure connects to a stepped well called as Pinakini Kolla. There are few larges fishes in this well. Besides few visitors there were half a dozen monkeys of various sizes. I guess the monkeys were hungry. One of the visitors threw in some popcorn like stuff for the fishes and two grownup monkeys were curiously watching the fishes gulp down food. It was interesting to watch the monkeys watch the fishes.. missed shooting the scene :-( 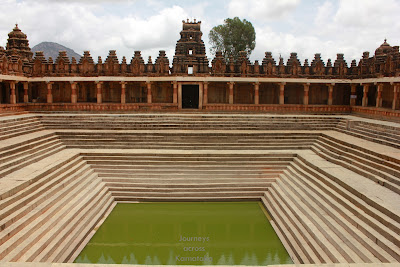 I must have spent over an hour looking around the sculptures on the temple walls, truly a marvelous temple. To see more about the temple do read a post on this temple by Rohini Kamath.

Back at the car, I woke up Sudhakar from his deep slumber and we headed towards Nandi Durga on Nandi Betta.

You are doing a good job Bro... seeing these broken temples my heart just goes to the deities. This crul mughals has done this to pur heritage & culture. But all these age old temples are hiding from popularity. Thanks to you for upbringing them to a place wherein people can have a look on the rich history we have.

Thank you, brother. I guess we should take steps to protect and preserve our heritage rather than blame someone for destroying ..surely we are capable of defending ourselves. We need to turn back and see what our ancestors were, and emulate them rather than accept western culture blindly.

Thank you bro for bringing public attention towards this Temple. Our Ancient Hindu Temples are always fascinating and Soothing to once mind. :-)