Gavisiddeshwara Matha (also called Gavimath) of Koppal is a one of the oldest monasteries in North Karnataka. Gavimath is at least 800 years old and one of the well known Lingayath Mathas. Gavimath is involved in uplifting the the society  by various activities like running educational institutions, providing food to the needy and imparting spiritual knowledge.
My first visit to Gavimath was June 23rd and second visit on July 27th, both this year.
That's Gavimath hillock as seen from the rock on which Ashika's edict is inscribed. Most pictures seen in this post were taken on June 23rd. Instead of taking the road, Malatesh and  took the shortcut path on these rocks. The narrow path on the steep rock face starts at the left. We pass by the large pond which seems to be a natural creation. At the summit of this hillock is the temple with Samadhis of two Swamis. 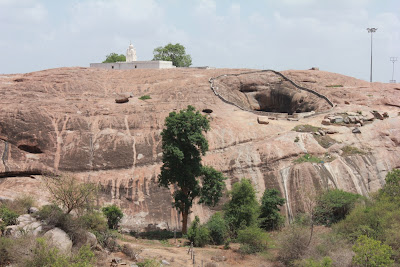 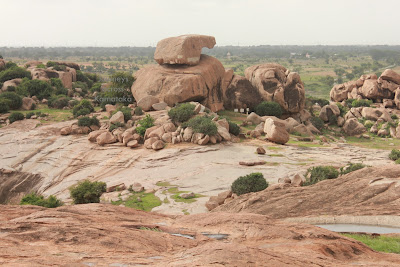 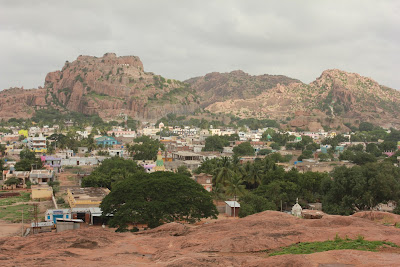 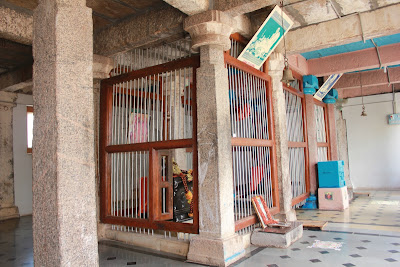 Gavimath being situated on a hillock, has different levels within its premises- right from the summit to the gateway at ground level. The Samadhis are the highest level. now we have just climbed down one level. On the left is a narrow doorway leading out to the next lower level. 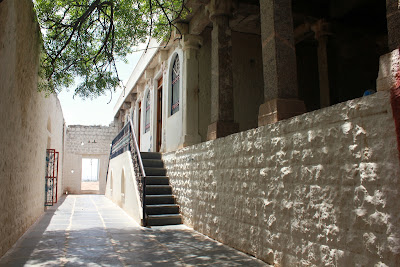 This white structure seems to be quite ancient. The design of the wooden pillars in the open hall seems like Peshwe architecture. Please correct me if I'm wrong. The front yard has a Neem tree and Banyan tree grown out from the same spot. This is a rare occurrence hence considered holy and worshiped by local folks. You can see threads binding both tree trunks, as though they are married. I'm not sure if Malatesh was going around the trees when I shot this picture. 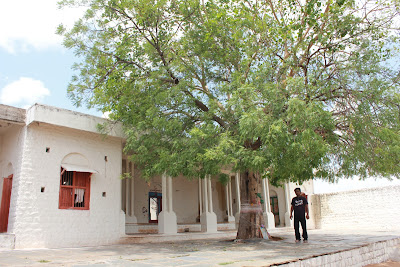 In this level is a small temple dedicated to Annapunesvari. 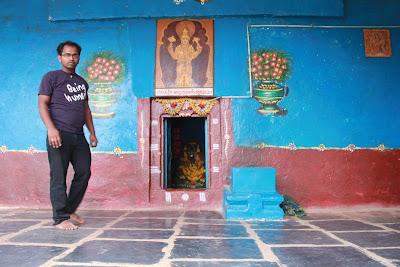 As we move down on more level, we stop to admire the formation of young boys clad in panchi and red towel over their shoulders. The two lines seemed like a row of ants moving slowly. Later we learnt that these boys are coming from the hostel to Gavimatha for morning Prasada. 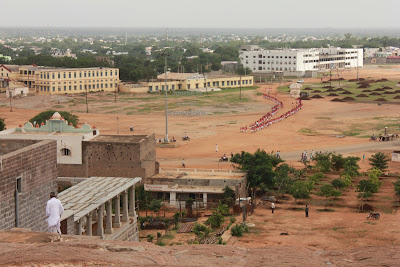 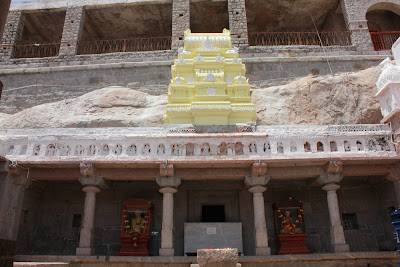 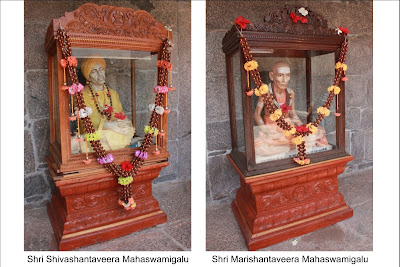 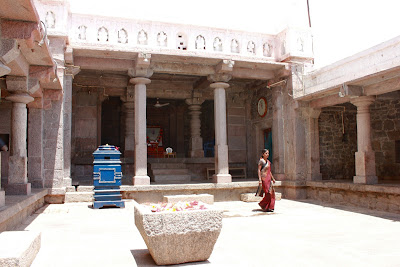 A stone tub filled with water and decorated with fresh flowers. 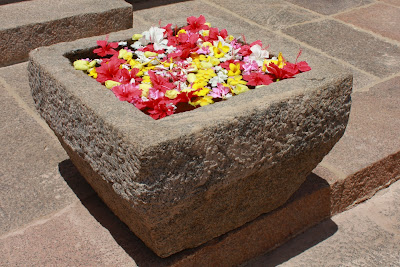 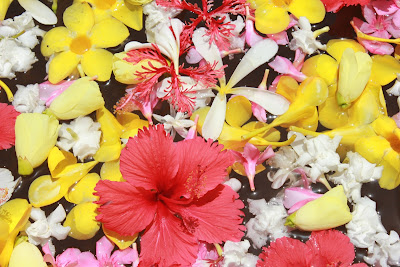 We come one more level. Inside this temple is Samadhi of three Swamijis. The temple has two narrow entrances barely 3' x 2', one to enter and other to exit. I struggled to squeeze through the doors. Once inside the doors, there are few steps leading down towards the Garbhagudi. A narrow passage around the Garbhagudi leads to the exit door. 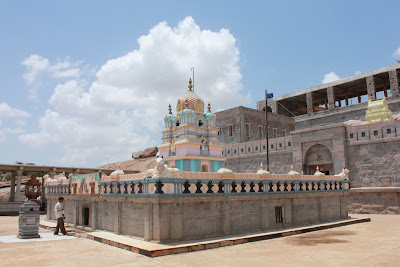 Gateway to Gavimath hillock. Once out of this gateway we are on ground level. 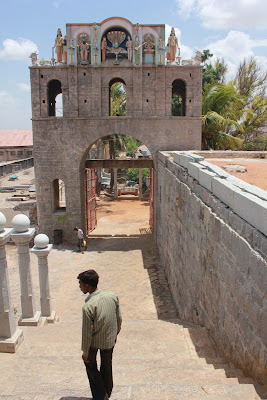 The lower part of this structure looks old while the upper part is recent construction. 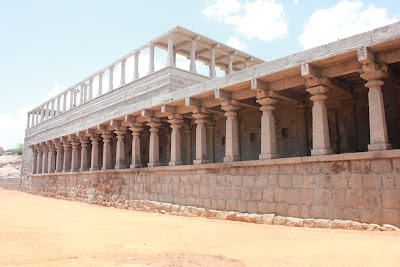 The ground level consists of a the kitchen & dining hall, administrative office, a small garden and the main gateway to the Matha. The garden is a collection of trees considered holy by Hindu traditions; Banyan, Bilvapatri, Banni and Neem. 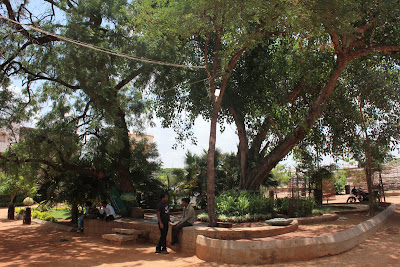 That's Gavimath's main entrance arch. Right besides the arch is a tall shed for the Matha's Theru. There are few shops selling coconuts & flowers and ample space for parking vehicles. As you see the Matha is kept neat and tidy, right from the top to the bottom. 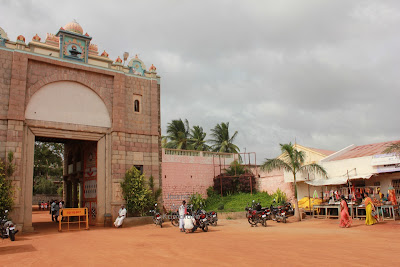 This is Gavimath arch on National Highway 63. 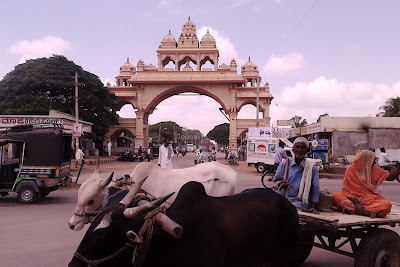 The annual fair held at Gavimath is a major event in Koppal district. Disciples donate food grains, rotti, vegetables, pumpkins and other material needed for feeding people attending the fair. Disciples actively participate in Tens of thousands of people throng to the Matha during the Jaatre. This year Gavimath Jaatre was held on January 11th, 12th and 13th. To see pictures of the Jaatre and Mataha visit this blog.

How I can reach Koppal from Kolkata? Where I should hire a hotel room?

Thank you, Arvind Desai and Unknown.

@Kisor Kumar Pal - If you are coming by air, the nearest airport is Hubli. Koppal is about 140kms from Hubli, you can take a train or bus. If you are travelling by train, then come to Hyderabad and then take another train to Koppal. Koppal has decent hotels and lodges.