About 4 years ago during a trip to Aihole, at a snack shop while spaeking to local folks I learned about an ancient temple on the other side of river Malaprabha. One of the persons said it could be reached by crossing the cart bridge near Galaganatha and Ramlingeshwara temple complexes. I was curious about the temple but made no effort to locate it.

February 23, 2013
Itinerary of the day was to visit forts at Katgeri, Guledgudda, Shantagiri and Pyati and also an unknown fort near Pattadkal. After Katgeri and Guledgudda forts we took Guledgudda-Layagundi-Pattadkal road. About 9 kms to Pattadkal, at a village named Sabbatahunashi we stopped to ask if people knew about the unknown fort. Folks told us the only fort is at Layagundi; we had already passed through Layagundi and we had seen a bastion on a hillock. The person suggested us to check out an ancient temple and gave directions; a dirt track flanked by fields. The temple is called as Maleyavvana Gudi. He also said there's Halae Layagundi (old Layagundi) fort near by. However the walls have collapsed and people have looted the stones from the walls. We thank him and decided to check out the temple.

The track rougher as we went in deeper. 5 minutes later we found Maleyavvana Gudi, situated right next to a pond, at the base of a hillock. 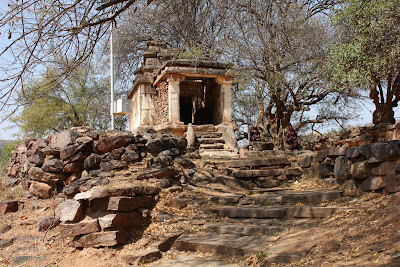 The immediate surroundings was deserted, it was silent except for birds chirping. The temple is small but a beauty though it lacks any kind of care. The temple is raised on a high platform ~ adsishthana. A 5-step stairway leads to the mukha-mantapa which is connected directly to the garbhagudi. 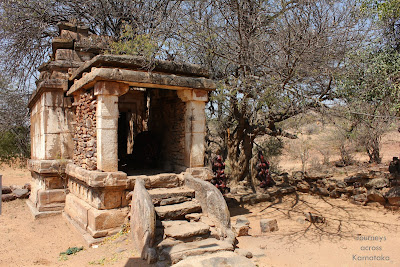 In the garbhagudi is a heap of stones probably one of the  collapsed walls. The deity, a oil & vermilion covered statue of Mahishamardhini is placed in the mukha-mantapa. The deity was decorated with pink periwinkles. The wall next to the statue is a recent addition, its not the original part of this temple. 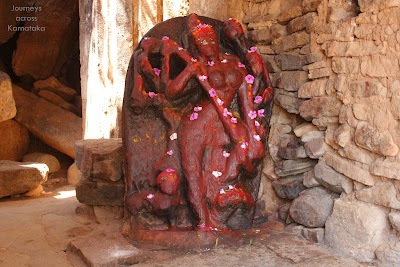 Outside the temple, to its right were two more similar sculptures of Mahishamardhini. The sculptures were made of sandstone, hence they are so worn. 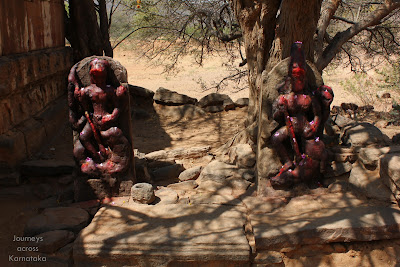 The platform ~ adsishthana is quite simple but not entirely plain. Faded floral designs surely would have looked great back then. 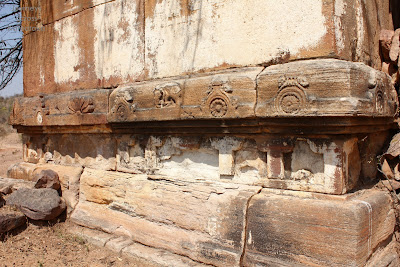 A close look at one of the murals. 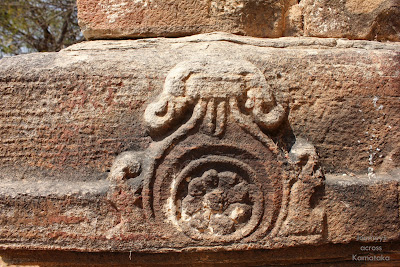 So this is the temple Aihiole folks had mentioned. This must one of the experimental temples, built 1500 years ago by Badami Chalukyan kings. 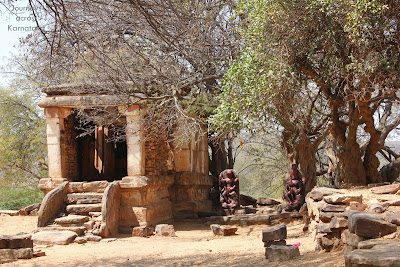 This place would be amazing if rains were normal. The pond would be full and the temple would look fresh and bright.

We did look around for the fort but nothing in the vicinity. I gave up because this deviation plan should not upset the itinerary, we decided to head back the road and search for the unknown fort.

Here's a schematic showing the location of Maleyavvana Gudi. The dirt track we took is not shown here. If you wish to see the temple, go to Galaganatha temple complex and cross the bridge; the temple is a 10 minute trek from the river. 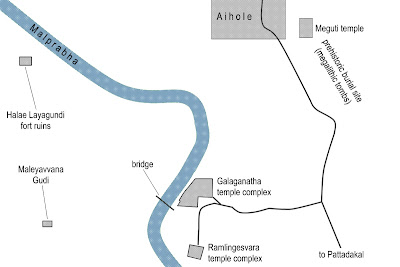