I had located this hill fort mid 2012 in Wikimapia and marked it as unknown fort since there was no village marked close to it. The hill was about 8 kms from Pattadakal on Pattadakal-Layagundi road. The stretch of road next to the hill ran parallel to river Malaprabha.

February 23, 2013
It was around 12-10 when we left Maliyavvana Gudi. Five minutes later we driving slowly by a hill to our right, the hill was being quarried heavily. As we drove towards the neighboring hill I saw a mile stone- Pattadakal 8 kms. Yes, the fort must be on that hill. 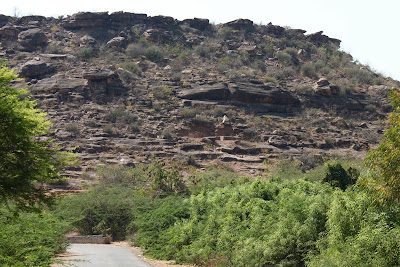 It was better to confirm before climbing. We saw a man in the fields, he confirmed the existence of fort on that hill. We asked if he would show us the fort.. Yes. Our friend's name is Banneyappa Kabbargi. This is half way up the hill; that's river Malaprabha and on the left bank is Banneyappa's land. 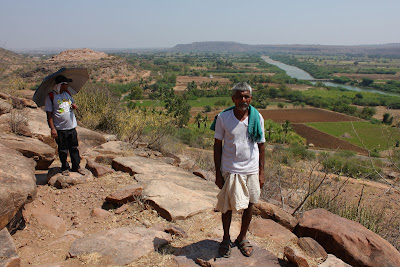 I had located the unknown fort but I forgot to ask the name. It was Malatesh who popped the question to our host. Akkargal fort was the answer.

This is a diagram of the spur of the hill on which Akkargal fort is situated. Actually the hill is quite big and the elevation of the spur is about ¾ of the summit. 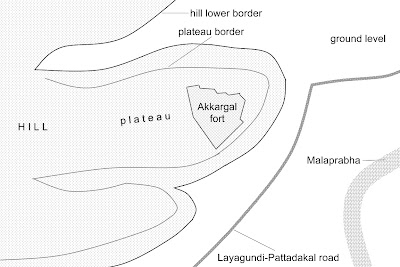 The climb lasted little more than 10 minutes. This tree was the first thing came into sight, it is situated within the fort close to the south-eastern border. 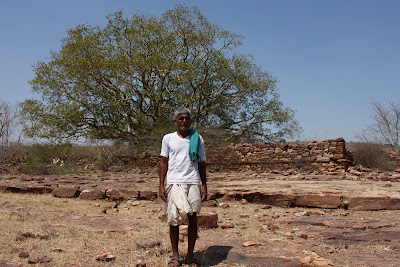 Under the tree is Hanuman temple. The structure is in dilapidated condition, rituals are performed occasionally. 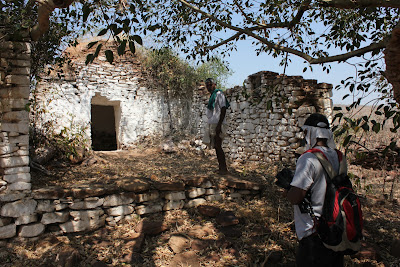 Within the fort are ruins of several small structures which were homes log time back. This is very similar to the ruins seen at Guledgudda fort earlier today. Some of the walls are well preserved, small cubical pockets can be seen in many. We found a grinding stone (see inset). 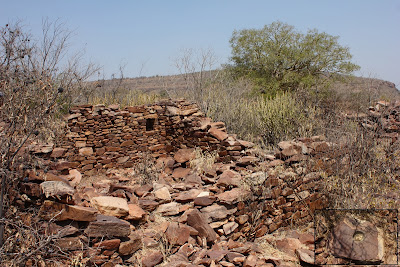 The plateau isn't exactly level surface, rather its a sloped surface. Within the fort is a elevated  part on which a small tower is built. Banneyappa is standing inside one of the houses. These stone-walled houses might have had earthen roofs supported by wooden beams. Banneyappa tried to identify the room; this might be a kitchen, this might be a store room, etc. We could see the houses were 2 or 3 or 4 roomed, small houses. I think back then there was no concept of bedroom, people slept in living rooms but had kitchens and store rooms. 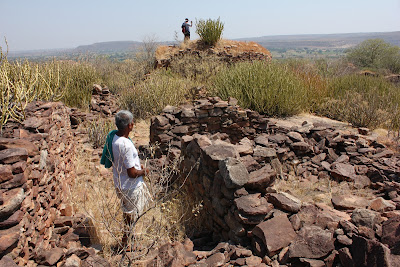 Banneyappa said people who lived here would go down to Malaprabha river to fetch water. He must have heard this from his elders- people would hold a handful of soaked grains, the would have them while going downhill and come back with pots of water :-)

We went near the tower, the presence of fresh rubble around it confirmed it was disturbed recently. We climbed up and to our shock there was a deep pit. Definitely work of treasure seekers. We analyzed the work; a group of 15 to 20 people armed with crow bars, spades and bowls have worked through the night, mostly during a full moon. The pits base was sloping with one corner having a man sized pit- most probably the treasure was in that pit. Well, the thieves' handiwork has given us a glimpse of ancient construction methods. 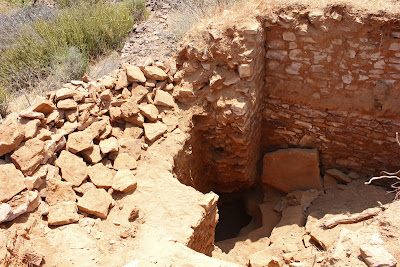 View of the fort from the tower; the temple tree is sen to the left. 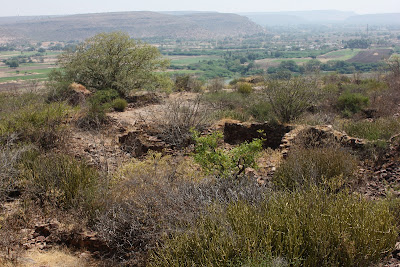 This is the northern wall. To the right is a kolla ~ narrow valley. 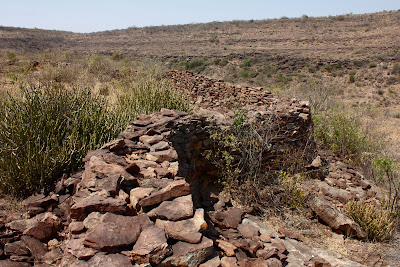 Looking in the direction of the tip of the spur.. we'll be heading in that direction. We climb the wall and get down.. 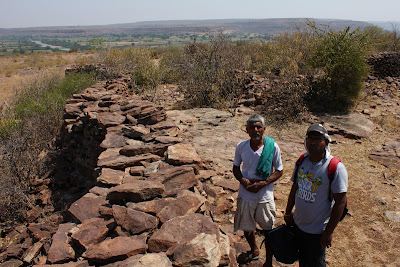 ..and come to the edge of the plateau. Near the mouth of the valley is a man-made pond to capture rain-water gushing down these slopes. A large earthen dam was constructed by the government. However  Akkargal folks felt the presence of the dam is a danger to their lands. If the dam breaks when full, water would rush straight into the lands below and wash away everything.. crops, equipment, etc. So to prevent such incidents a relief was provided at one side, that way the dam would retain water until it reached a fixed level and let out excess water. 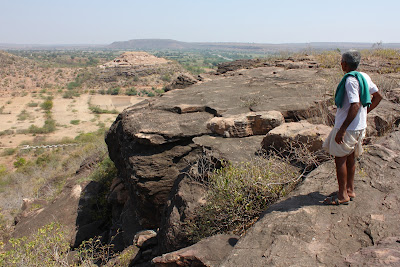 These hill are grazing grounds for shepherds and cattle herds. In fact Banneyappa has spent many a years grazing his cattle here. These hills provided variety of berries, fruits and water. In fact we saw few seethaphal ~ custard apple trees; after a rainy season those trees will be full of fruits.

In this picture, the space between the two jutting portions is the fort entrance - that's my guess. The  passage has steps through it, partly natural and partly man-made. 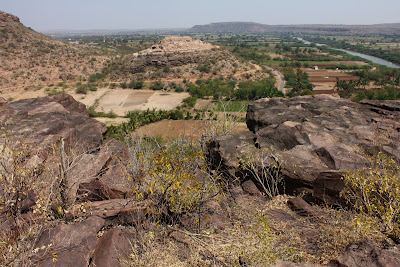 As we descended into the passage, we could see shelters on both sides, they are sentry posts. Under the shelter on the left is a small platform, perhaps it was built to reduce the gap between the floor and the ceiling- that way the shelter is more effective. 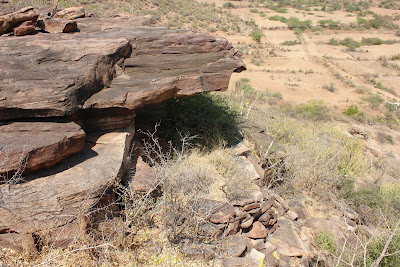 On the right is a series of outcrops, they look like teeth in a canine's mouth. Malatesh and Banneyappa have already settled themselves on a rock. 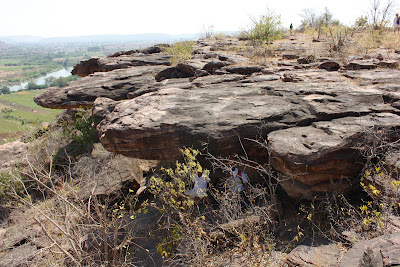 Banneyappa is telling about people taking a path through this hill to Layagundi. They would walk about 5 kms one way to the market and haul back provisions for the week - that was many years ago. Now people go by buses. 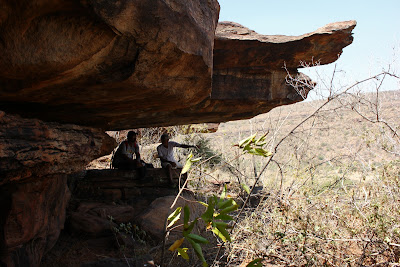 Banneyappa is a kind man. He lives with his wife; God has chosen not to bless them with children. 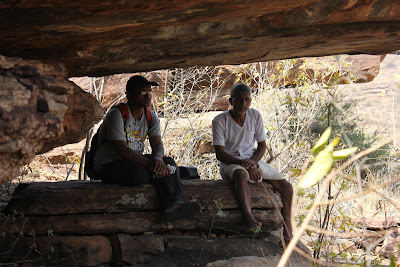 Behind me was this formation. It has a small seat, a good spot for a sentry post. The guard can remain hidden too. 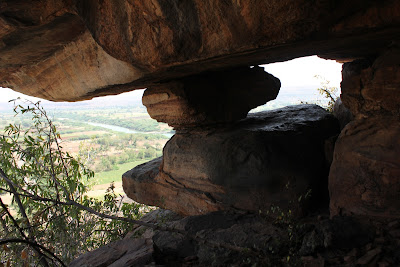 Few centuries from now this bit of rock will give away and the formation would collapse.. i.e. if man doesn't get it before Mother Nature gets it. The break in the shade cooled us renewed our energy we made our way down. It was lunch time, Banneyappa showed us to a spot in his fields and gave us a mat to sit on. Our home packed lunch was jolada rotti, soaked cereals, salad, chatni and curds. Bannayeppa declined our invitation to join us for lunch; said he had finished lunch just before our arrival. We thanked our host, noted his address and promised to send his photo.

We saw this helipad rock formation on the other side of Akkargal hill. If it was early morning, I would have climbed up to get a closer look. It's beautiful, isn't it? 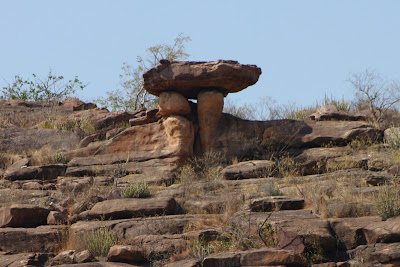 About a 3½ kms from Akkargal hill we saw this structure situated on a rocky hillock to our right. The structure seems like a temple, that can be confirmed only after a visit. Heavy quarrying activity can be seen around the hillock. I just hope the historic monuments survives as it is. 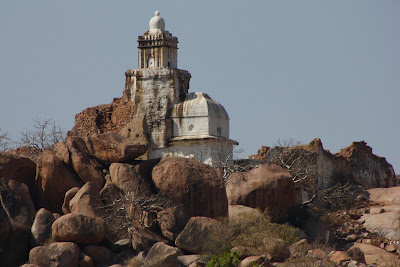 On the itinerary of the day were two more hill forts- Shantagiri and Kodathgeri. Considering the time and the distance to be traveled it may not be possible to cover both.

Nice to know about many of these unknown forts. Thanks for sharing .