March 7, 2013
We drove by Jatinga Rameshwara but it was not in our naseeb to climb the hill.

December 22, 2013
Our day started with a visit to the Neolothic site on Sangankal Gudda to see the stone implements factory with our guide Rama Dasa. The day, a Sunday, was astronomically important- it was winter solstice. Having spent half day touring the hill we came back to Bellary, had lunch and immediately started off towards Jatinga-Rameshwara and Brahmagiri. We had three places to see this afternoon- Ashokan edict of Jatinga Rameshwara, Ashokan edict of Siddapura and Megalithic burial site of Brahmagiri. Edicts were a priority, decided to finish off with the difficult one first.


This Jatinga-Rameshwara hill, a rocky hill with its peak at 180 meters above the surrounding plains.
About 2 kms ahead of Rampura bus-stand, we turned left towards Devasamudra. At the village we got directions to Jatinga-Rameshwara -its a well tread path. We could drive right up to the base of the hill where a flight of steps snakes up the rocky-woody slopes. The dirt road passes through a valley and hill towered above us, especially Dodda Jatinga looked seriously high. We imagined the climb to be a long one but there was no giving up without trying. Also, we had no idea where the Ashokan edict was.. on the flat part of the hill or at the highest point... we had to be patient for time being.

There we go.. Mama and I maintained a steady pace. Good I had only chapati for lunch, I was comfortable. Good thing about this climb was we had shady spots to stop and relax. 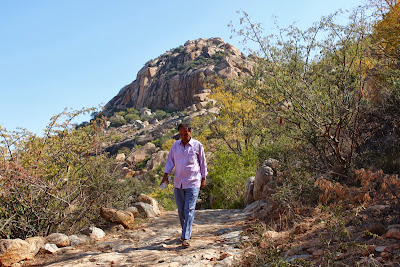 The flat part of the hill was in sight, our progress was good :) The flight of steps is a recent creation. I'm sure this route was an ancient one. 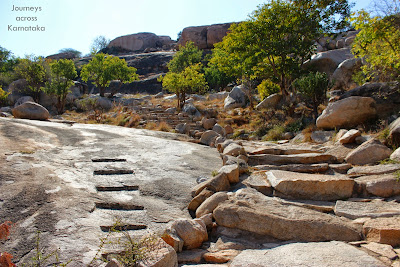 Soon our path was completely shaded by the hill and a stone wall came into view. I had a feeling we were very close to the edict now. Two boys were descending.. out of curiosity I asked them if they know about the Ashoka's inscription. One of them said there's no such thing very confidently. I asked where he was from; Devasamudra. People are seriously ignorant here. During our previous visit to Siddapura, a school headmaster had told Brahmagiri inscription was the only one here. Very said indeed. I asked them if they would come with us to see the inscription.. one boy was ready but the other one wanted to get back to his village. Well.. 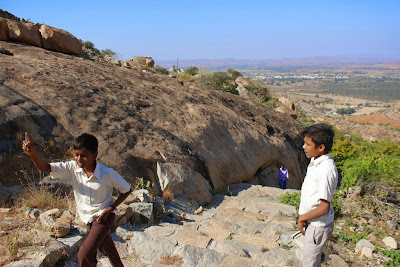 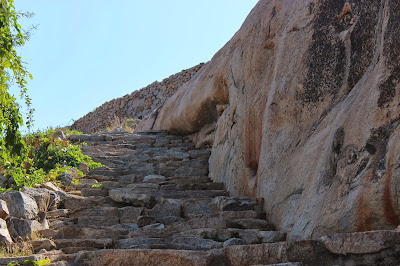 Glimpse of Jatinga Rameshwara temple through an opening in the wall. 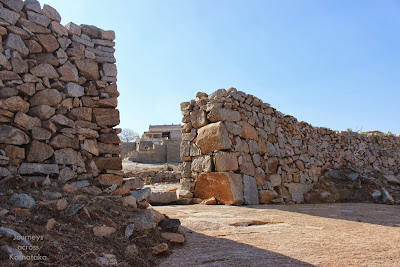 That's the enclosure built for the emperor's message of peace. The structure's architecture is very similar to that of Brahmagiri. The metal grills are of same section, probably from the same lot. On the right, in the background is the temple's entrance. 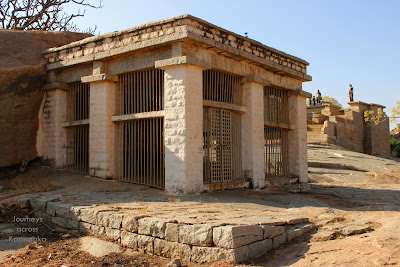 The structure as seen from the rear. Two Frangipani trees grace the otherwise bare temple complex. 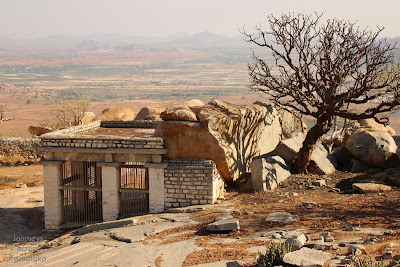 A peep though the grills.. that's the lucky boulder which holds Ashoka's message for peace. The letters have faded for badly. If not for the British archaeologist Mortimer Wheeler's effort to have this boulder protected, the letters might have worn to the extent of disappearing completely. 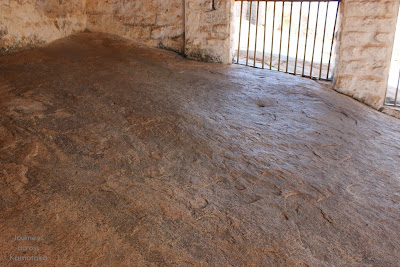 May 2013, I had done little research and found the transliteration of Jatinga-Rameshwara edict. Unfortunately the translation was not given there. For a general meaning of the edict you can refer either Nittur edict or Udegolam edict.

A closer look at the text. The letters are quite big, about 3 to 4 inches tall but not as big as Nittur edict. 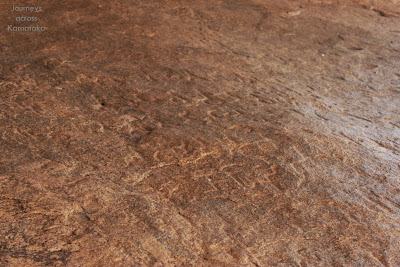 There was a crowd at Jatinga Rameshwara temple, one of the visitor's told us that a new idol was installed in the morning. Most of these people were from Devasamudra and they were camped here since yesterday afternoon and plan to stay back for the night and descend in the morning. Our host invited us to partake pooja prasad. 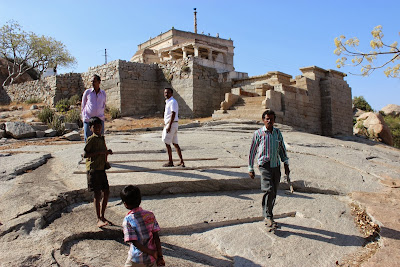 View from the temple entrance: the inscription enclosure, and Dodda Jatinga. 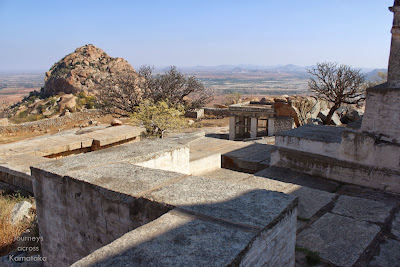 Within the temple complex is a board giving out some basic info about this hill. Transcription of the information board:

This hill is about 3469 feet above the sea level about 3 miles north-west of Brahmagiri. Being one of the places where eidcts of Ashoka have been found, the place is of great archaeological interest. This place is also connected with the story of Ramayana. It is here that Jatayu, the heroic bird, fell fighting with Ravana in its effort to rescue Sita from him.

The region was inhabited right from prehistoric times is evident from the discovery of pre-historic sites of Brahmagiri and Chandravalli. A minor rock edict of Ashoka was found at Brahmagiri about 5 kms south-east of Jatinga Rameshwara. Referring to the place as Isila, indicates that it was the provincial capital of Ashoka and was the southernmost pasrt of the Mauryan dominion. The minor rock edict refers to the message issued in the name of Devanampriya and it is in Brahmi script of the 3rd century BC.

The temple is small and cozy; it has a small Mukhamantapa which connects directly to the Garbhagudi. Right opposite the main temple is smaller shrine and in the same line is the Vijayastambha. Oh, the prasad offered was holige and badnekay-palya; very delicious preparation :) While we enjoyed the mini meal, our hosts had a difficult time keeping red-faced monkeys at bay. 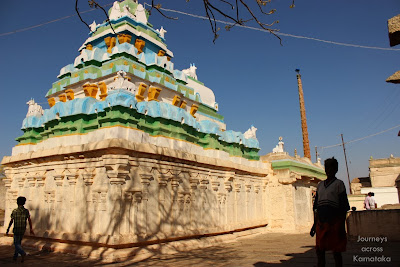 Behind the main temple is a natural rock shelter and a shrine. On the rock are two inscriptions. 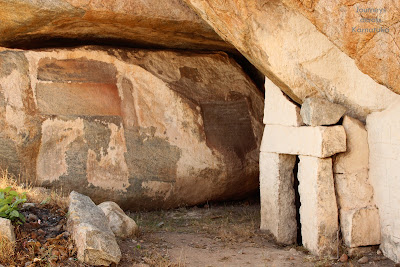 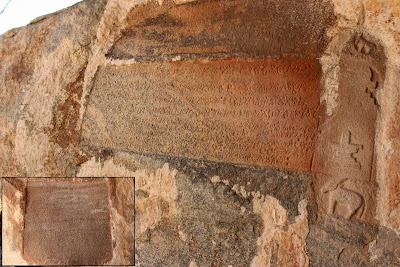 Two more shrines. Behind these shrines is a natural pit.. 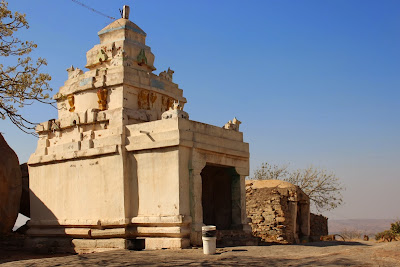 ..sadly the pit did not have much water. If this area had received normal rainfall, this pit would have been filled. Also there's a rough cut hero-stone. 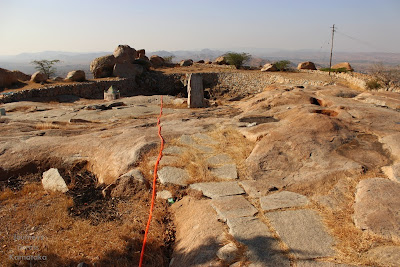 Just besides the main temple, there's a path guided by a railing on the steep western slope is a small cave like pit with a pond. The pond is known as Kamala Honda or Tavare Honda ~ lotus pond. I was surprised to see lotus creepers this high. 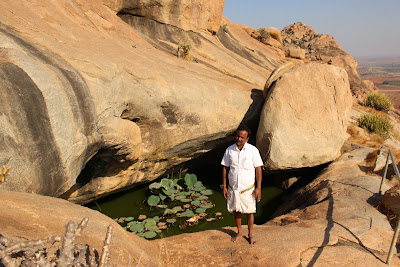 Back at the temple, we thanked our hosts and left. Mama and I decided to explore the base of Dodda Jatinga, we had no plans to climb it. We were told there's a temple at the summit but the climb is not so easy. 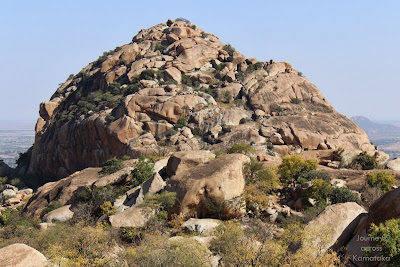 We found two very primitive looking temples close to each other. Mama mentioned they are like Morayere Mane ~ dolmen we had seen at Kumathi yesterday. Yes, indeed it seems like a recent dolmen design. A memory flash! During my school/college days I remember seeing such granite structures in burial/cremation grounds in & around Bengaluru. Some of them seemed not older than 50 years. Does it mean dolmens were built even in 20th century? 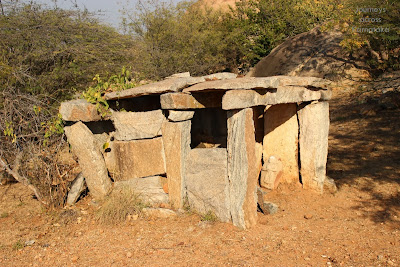 The other shrine is built on a rough platform. Mama inspects the surroundings. I must come back here some time and explore the hill thoroughly. 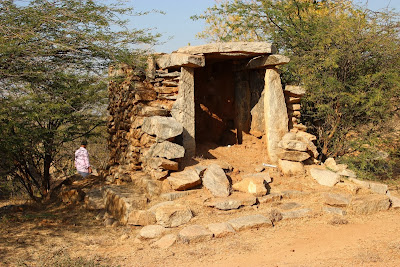 It was past 3-30 now, we decide to leave so that we have enough time for Siddapura inscription and Brahmagirir megalithic site. The descent was non-stop in complete shade, lasted 20 minutes.

Here's a rough map of the area showing the locations of all three edicts of Samrat Ashoka. 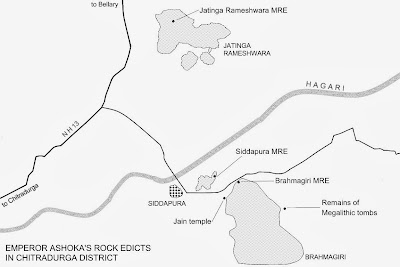