March 7, 2013
Our visit to Ashoka Siddapura was incomplete because we missed out Ashokan edict and the megalithic site of Brahmagiri. Time was a constraint that day, we had to rush to Gudekote fort.

December 22, 2013
Our day started with a visit to Sangankal hill to see the Neolithic stone implements factory with our guide Rama Dasa. The day was astronomically important- it was a day of winter solstice. Having spent half day touring the hill we came back to Bellary, had lunch and immediately left to Jatinga-Rameshwara. We climbed Jatinga-Rameshwara hill < 30 minutes and spent almost an hour on the hill seeing Ashoka's inscription and the ancient Shiva temple. We descended the hill and drove to Siddapura. By 5-00 PM we had seen Siddapura's Ashokan edict. Next we head towards the last spot for the day - Brahmagiri Megalithic site.

Just next to Brahmagiri Ashokan rock inscription site is a narrow dirt path which runs along the base of the hill. About 800 meters into the path, our car could not proceed any further because of granite slabs protruding out of the ground.. Prakash felt they were high enough to touch the oil sump of his Indica. Our guide told us those slabs are remains of a 'More Mane' ~ megalithic tombs. This entire area was full of such granite structures, now all that we get to see are stubby remains. We decided to leave our cab and walk. 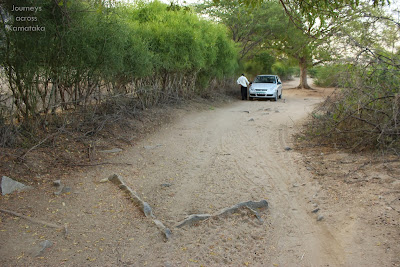 That's our guide Thipperudra and my uncle Mohan. Between them on the ground is a remains of a rectangular cist grave. 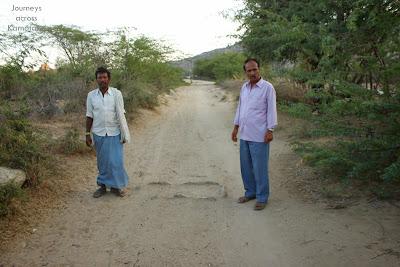 Below diagram gives the location of the Ashokan edicts and megalithic tombs. 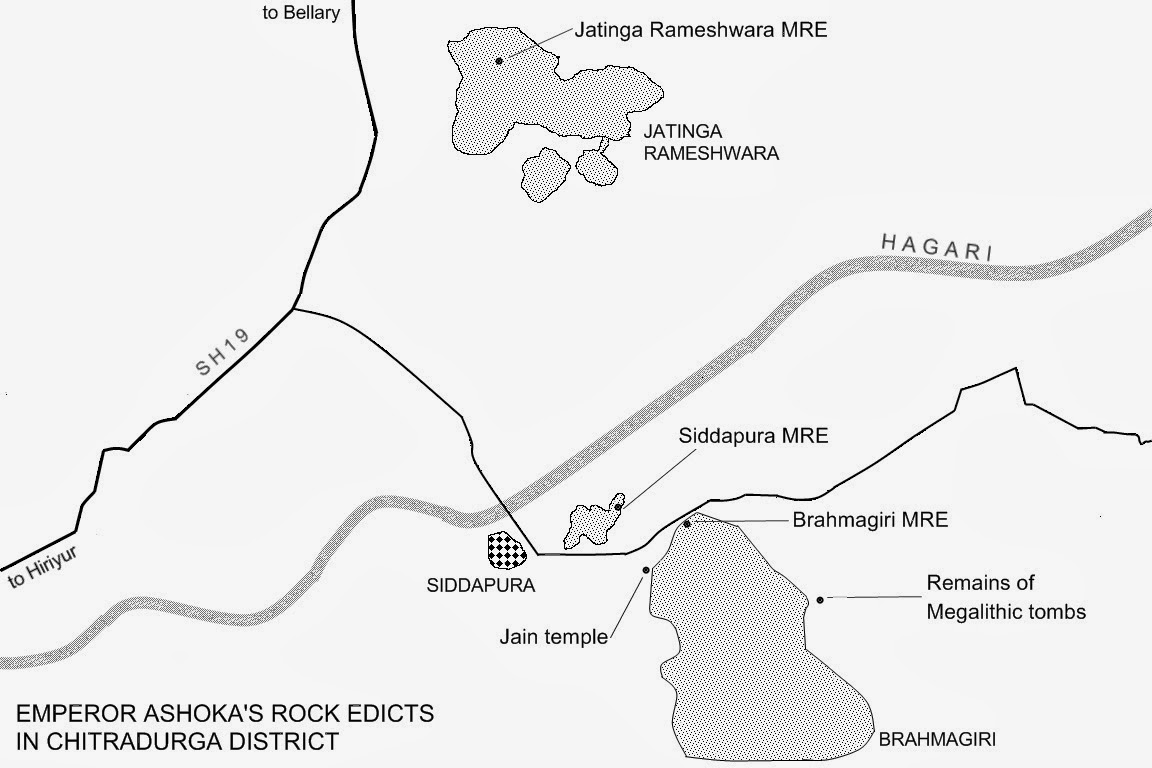 As we walked further we reach a small fenced enclosure.. sadly this is all that remains of a once very important prehistoric site :( In the background is the southern slope of Brahmagiri hill. Barely 300 meters from here is a small village named Roppa. 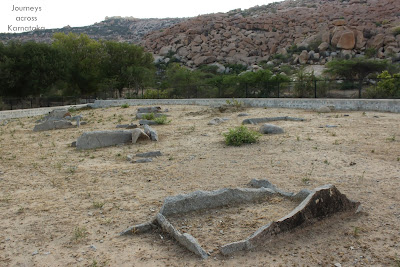 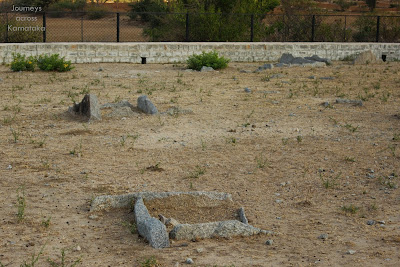 Thipperudra told us such remains were spread over a large area. Land owners/farmers found them a hindrance to cultivation and they were removed. The excavated slabs were used in construction of houses. In fact Thipperudra has eight tractor loads of such slabs piled up near his house :( 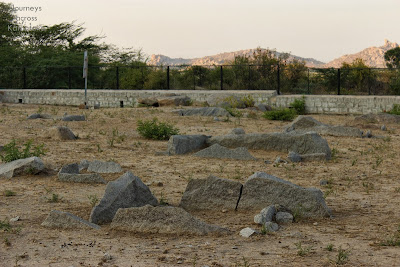 This site was studied by many archaeologists and some of the reports are available online. Below are the extracts of two such reports.
Extract from "Encyclopedia of Prehistory: Volume 8: South and Southwest Asia."
Brahmagiri
Inscriptions associated with the North Indian ruler Ashoka (273-232 BC) of the Mauryan empire (322-185 BC) were first identified in the region in 1892 and indicate the area was known as Isila; excavations at the site were conducted by Mortimer Wheeler in 1947 (wheeler 1948). The site extends over an area of c. 500m east-west by 100 m north-south, with settlement remains on the outcrop slopes and mortuary remains in the form of four to five clusters of megalithics on the plains below. Ten megaliths were excavated; these were stone circles with internal subterranean stone-lined rectangular burial chambers or stone circles containing burial pits. Grave goods include ceramics, iron implements, beads, and spindle whorls. No complete houses were excavated; some post holes and pits were identified. A reservoir or water tank is located on the eastern edge of the site.
Cultural Aspects
Cultural Features: Wheeler defined three chronological phases on the basis of stratigraphic dating and changes in artifact forms: "polished stone axe culture"; contemporary terminology refers to these periods as the South Indian Neolithic, Iron Age, and Early Historic respectively. No absolute dates are available from the site. Diagnostic artifacts of the Iron Age include black ware, and red ware, and russet-coated painted ware. Postfiring graffiti are common on ceramics, especially in mortuary contexts. Iron and copper artifacts and ornaments of shell, jasper, steatite, gold and carnelian were also recovered.

Extract from "Astronomical orientations of the megalithic stone circles of Brahmagiri" by N Kameswara Rao in Astronomical Society of India, Bulletin (ISSN 0304-9523), vol. 21, no. 1, p. 67-77.

Abstract: The megalithic stone circles at Brahmagiri which have been dated as 900 BC show clear astronomical orientations. The site lines from the centre of a circle to an outer tangent of another circle points out to the direction sunrise and moon rise (full) at the time of solar and lunar solstices and equinox. Site lines towards the maximum azimuthal elongation of the then circumpolar star β UMi (which also happens to be the brightest star near the pole) indicates that the time of the establishment of these Megaliths is earlier than 600 BC, may be between 900 to 600 BC. The megalithic people were probably aware of the 18.61 year period of the moon's solstice in addition to keeping track of the sideral day, the seasons and the year.

Coming to think to these sites, there's a close relationship between megalithic sites and Ashoka's edicts.
.........
Posted by siddeshwar at 12:30 AM