March 2013
During a one of the discussions over phone with Rama Dasa of Sangankal village there was a mention of Kumati dolmens. I could neither locate Kumathi on Google Maps nor find any useful information about those dolmen on the net. Even Rama Dasa wasn't sure of the location except that it is situated near Kudligi town and Gudekote village. On the trip, at Gudekote I inquired directions to Kumathi and got a good reference. Later I could locate the village on Google Maps but there was no further info. I'll have to remain patient until I reached the village.

December 21, 2013
Kumathi was the last place for the day, reaching it was easy- Kudligi to Iyyanahalli to Valase to Kumathi. At the village I was in for a surprise, two or three people I spoke to had no idea about Moryara Mane :( I felt its best to check with Rama Dasa and called him. Luckily he was at Sangankallu and told he'll call back after checking his collection of newspaper cuttings. While waiting I decided to walk to the village square to inquire and at the same time a man was walking towards me. We got introduced. This man, Iyyanahalli Kamayya seem to know what I was looking for and told us he had something to show us. Rama Dasa called back with the location; the dolmen were in Shri.Tipperudraswami's fields - our friend Kamayya knew that location too :) Rama Dasa also told me about another dolmen at Hulikote in Harijan Borakka's field. During all the waiting and discussions I happened to notice a bastion on a mound situated in the village. Centuries ago a chieftain must have planned to have a fort here.

With Kamayya as our guide we drove down a dirt track going south and stopped near a hillock named Sharanappa hill. All we saw barren fields, sand like soil. Kamayya lead us into the fields... about 400 meters from dirt track was a badly damaged dolmen, similar to the dolmens of Hire Benkal except for the cap-stone.

The dolmen was made of granite, the north facing slab has a port hole and the cap-stone is rectangular. At Hire Benkal are two types of dolmen - short (1 to 2 feet) and tall (6 to 10 feet). While the shorter ones had square cap-stones the taller ones had circular cap-stones. In the background is a hillock named Sharanappa Gudda. 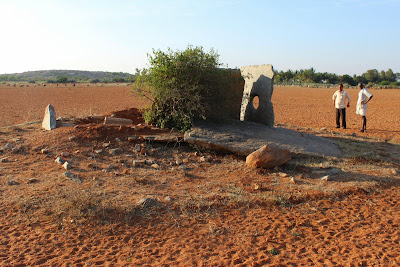 Now I'm facing north; 340 meters to east is a stream (dry at this time of the year) and 600 meters to west is Sharanappa Gudda. On the hill is an ancient temple where village folks perform rituals regularly. The dolmen is badly damaged but does not seem to be disturbed over the past few years. Hope people do not loot the slabs. I inquired if there are any more such dolmen - Kamayya said no, this is the only one. 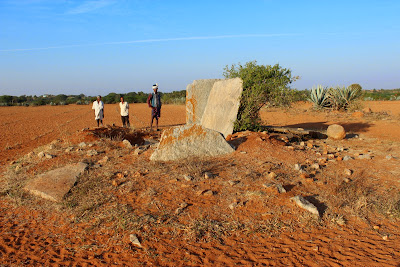 The slabs are approximately 4" to 5" thick measuring 6' wide, standing 6' above ground level and the port-hole is 10" to 12" diameter. 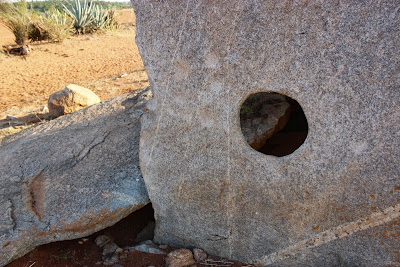 The circular hole is neat and filleted. 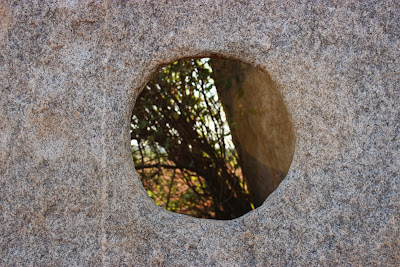 Day was coming to its end.. we walk back to the cab and drive back to Kumati and then head towards Valase. 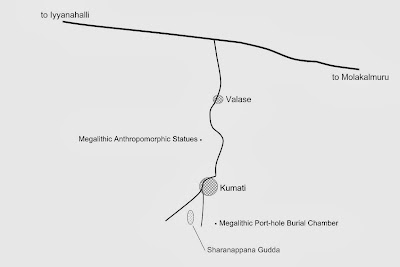 Kamayya spotted Shri. Tipperudraswamy in his fields, we decided to meet him before going to his fields. A quick intro and a snap.

Soon we were heading west on a dirt track and I was expecting to see some more megalithic tombs but some between bushes I got a glimpse of a standing object which seemed like a scare-crow. As we drove further, it became clear.. I was looking a altogether new type of artifact. 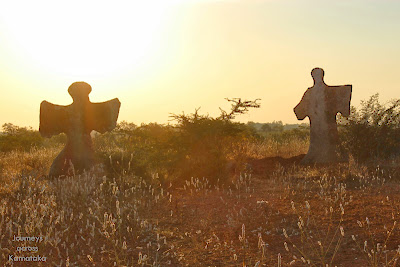 Mama said they look like Christian characters. To me they looked like male and female figures. These statues are made of 5" to 6" thick granite slabs standing 11' to 12' tall. Considering the buried portion of the statues the overall length of these slabs must be 16' to 18'. While the shorter statue is symmetrical the taller statue is asymmetrical. Since the figures have no facial features its hard to tell front and back. Perhaps, its OK to assume they are facing east. 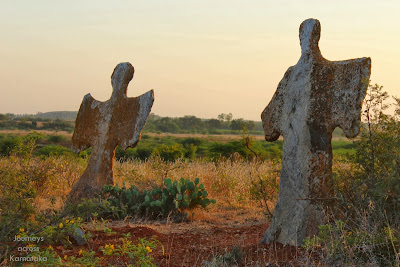 The female statue is symmetrical and curvy. 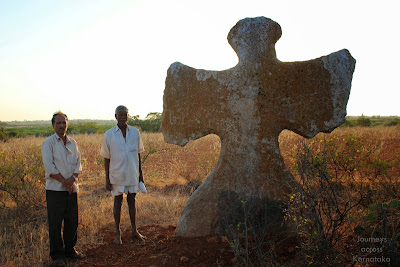 The male statue has straight edges. Perhaps this statue was also symmetrical originally. Looks like the slanting limb is a result of a damage. 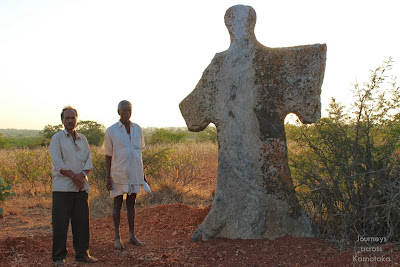 Setting sunlight lights up the statues with a soft glow. Locals call them as Rakshasa Kallu ~ demon stones. The story behind the name goes like this - a godly person named Nunkemala Siddeshwara was passing by this spot. Two Rakshas living in the vicinity troubled him and the enraged Nunkemala Siddeshwara's curse turned the Rakshas into stone statues. 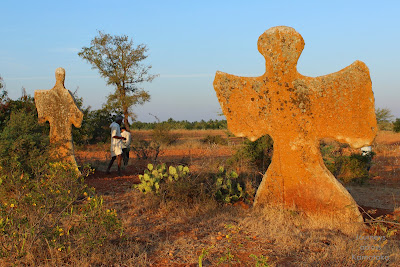 
There are questions now:

Who created them and when were they made?
Based on the material used, I think its OK to assume these statues belong to the same time period as that of the port-chambered tomb. So it must be Neolithic. They could be much older too.

Why were they made?
Perhaps these statues were grave markers and the surrounding plains was a burial ground.

If we look beyond Kumati and Valase, especially towards Gudekote in the North and Brahmagiri to the East.. both are known prehistoric sites.. we'll know that an area under a circle of 50 kms diameter has several prehistoric sites. During my visit to Gudekote after seeing rock art I had imagined a large prehistoric settlement between Kudligi, Iyyanahalli, Molakalmuru and Rampura. Read Rock art at Gudekote fort.

December 22, 2013
Next day when we met Rama Dasa, he expressed his thoughts; he said the curvy statue can also be seen as a bird. He was right, it seems like a flying pigeon. Do share your thoughts and opinions, I'm sure the discussions will be interesting.
.........
Posted by siddeshwar at 12:30 AM

Have been planning to visit this place for long. Nice to see the pictures of this place . Thanks for sharing about this place.

Vey interesting post!! I heard about Rakshasa kallu in different villages, but I didn't show much interest on that. I think there must be specific reason for existence of Rakshasa Kallu...not because of curse! It's just a opinion. Thanks for sharing such a interesting post.

Pushpa, please share the names of the villages which might have Rakshasa Kallu. That information will be realyl helpful in locating and documenting historic artifacts.

I heard this word from Andra friends,when I was there in collage. People also call Rakshasa gallu as Pandava gallu. I don't know particular village name, but I think may be we get this type of stones near Karnataka-Andra border...

In fact Kumathi itself is 15 to 20 kms from Karnataka-Andhra border. I hope the village you are referring to is a different one.

when i saw the pics,I too thought its scarecrow & then as plus symbol, hurried to see details for what they are really, its interesting, the story behind those statues is nice, wld like to believe it :) Yes the outlook of statues looks like male & female, as u said they may be grave markers. I had never seen such statues nor heard about it..nice to know about these statues.

Thanks Manjula. There might be other sites with similar statues, perhaps smaller ones.

It seems that the Dolmen are a part of any stone circle, whose other stones have been destroyed due to any reason. The 'Demon stones' are really unique, but they resembles Birds too. This type of structures were a part of megalithic culture.

Thanks Abhishek. A stone circle around the dolmen - yes, its a possibility.

Both the monoliths are the symbolic burials which belong to the Megalithic period (1500 BC-200 BC). In Archaeological terminology, archaeologist calls it "Anthropomorph", These statues represent the human body in a very simple and abstract form. Anthropomorph is a burial type of Megaliths. As of now, this is the only evidence we have in Karnataka. We can see such type of structures in Andra Pradesh, Telangana and Tamil Nadu.