March 2013
On the way to Sandur, we had driven past this mound but we never even realized it was no ordinary mound but a prehistoric ashmound.

December 23, 2013
We left Bellary early morning, heading back towards Dharwad. My plan was to locate the prehistoric ashmound and then spend some time at Kamalapur and Hampi on the way. This time I had noted the location of the mound- it was close to the south-west corner of Bellary Thermal Power Station's compound. We drove past Kudatini town and then BTPS main entrance.. We stopped and inquired at a tea shop but those folks were ignorant about the mound even though they were residents of this village. Anyway, we drove on.. I kept an eye on the compound wall.to my right. About 1½ kilometers from the main entrance the compound wall turned north.. this must be the south-west corner. Yes, the mound was dead ahead. The mound is 5½ kilometers from Kudatini village.

The mound looked like a hillock. It has a stone-cement wall around it.. looks like an effort to protect the ashmound. We parked next to the mound, off the highway. This was used as a bye lane by truckers and this side of the ashmound was used as a toilet and dump for trash. We managed to find a relatively clean spot to climb on to the mound. The place where I climbed on to the wall had two angular stubs embedded in the concrete - I'm pretty sure those are the remains of a board, either a notice that this is a protected site or a signage stating the importance of this mound. 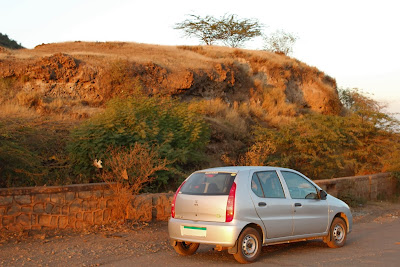 The road on the right is Bellary-Torangal road and on the left is the bye-lane. Standing on the slope I shot this picture. The ashmound is roughly oval in plan measuring 310' in length and 150' at the middle and 20' at its highest. 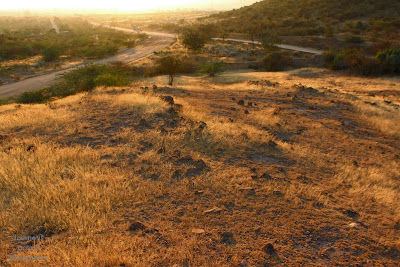 When seen closely the surface is different compared to the neighboring hillocks. While the hills are covered by shrubbery this ashmound is covered mostly by grass and few shrubs. 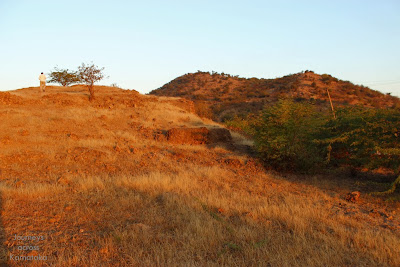 On the surface were hard but light white colored lumps. I believe these were ash lumps because ash when exposed to air for a prolonged period hardens. However, Mohan Mama's and Prakash's opinion differed, they said those lumps are a type of stone called Sunburli. They said these lumps were just like sunburli stones found in black soil fields near Dharwad. 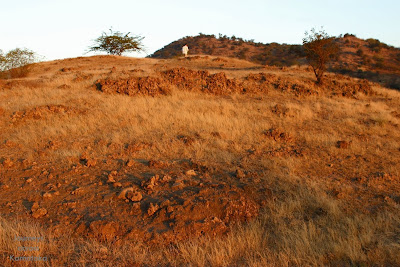 Standing at the highest point of the ashmound. 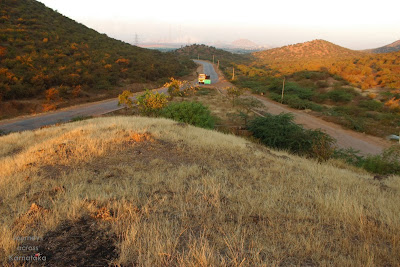 Hardened lumps sticking out of the mound. The two cooling towers of BTPS. 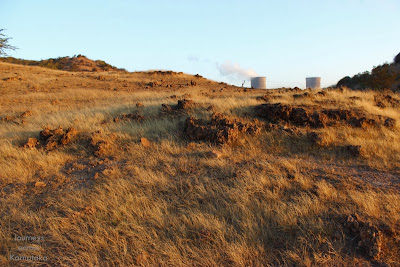 A close up view of a lump. 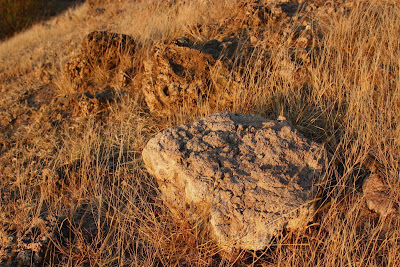 A recently made pit to check what lies under the surface. 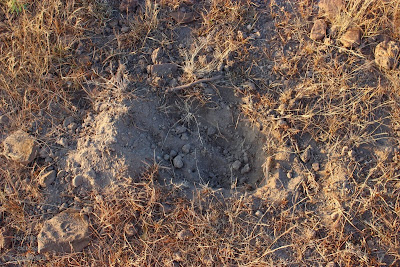 Now the questions-
How did such a huge ashmound come into existence?
Studies have revealed these are not natural creations but man-made.

What actions of man lead to the creation of an ashmound?
Obviously large quantity of matter was burnt over a prolonged period, perhaps 7 to 8 months. Studies have also indicated that most sites had ash which were result of burning cowdung.

What was the purpose or reasons for such fires?
Reasons could be any of the following- 1. annual cleansing ritual, 2. to produce lime, 3. to bake mud pots, or 4. to scare away wild animals. Pieces of pottery have been found in ash mounds, their presence could mean anything - either pots were burnt to harden them or pots filled with food was offered to Agni during rituals.

We spent around 45 minutes here, trying to raise questions to each other and then find answers to those questions. The discussion went on and on.. 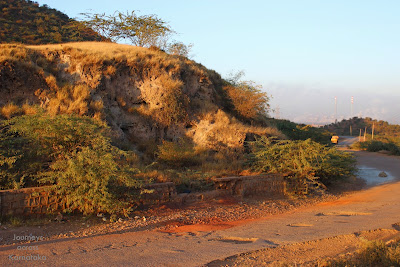 Two lumps I brought home. I want to fetch Sunburli stones from a black soil field and compare them with the lumps. 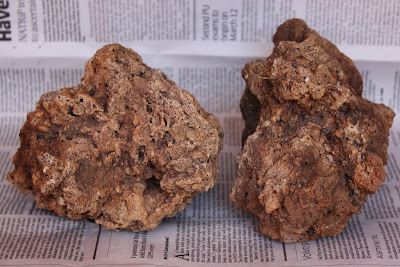 Months have passed by, I'm yet to make a trip to a filed to find the light weight white colored Sunburli.

Yesterday on 06-19-2018 I have visited this place NHAI Authurities widening highway. I could not understand ashmound. Whether it is burial ground of humen or any thing else.

Interesting account indeed. Browsing through a 1835 journal of the Asiatic Society of Bengal i came across an article that the author describes as scoria at Budigunta near Bellary. Pl refer to the link here https://www.biodiversitylibrary.org/page/37188833 and let me know what you think? Written almost 200 years ago it’s an interesting account of the area and it’s geological features and it seems to be the same or similar area that you describe in your post. Except scoria is a type of volcanic rock