November 28, 2013
Sannati is a village on the left bank of river Bhima in Chittapur taluq, Gulbarga district. At Sannati is Chandrala Parameshwari temple, an important pilgrim place for Dasistha Brahmins. A fort also existed at Sannati. 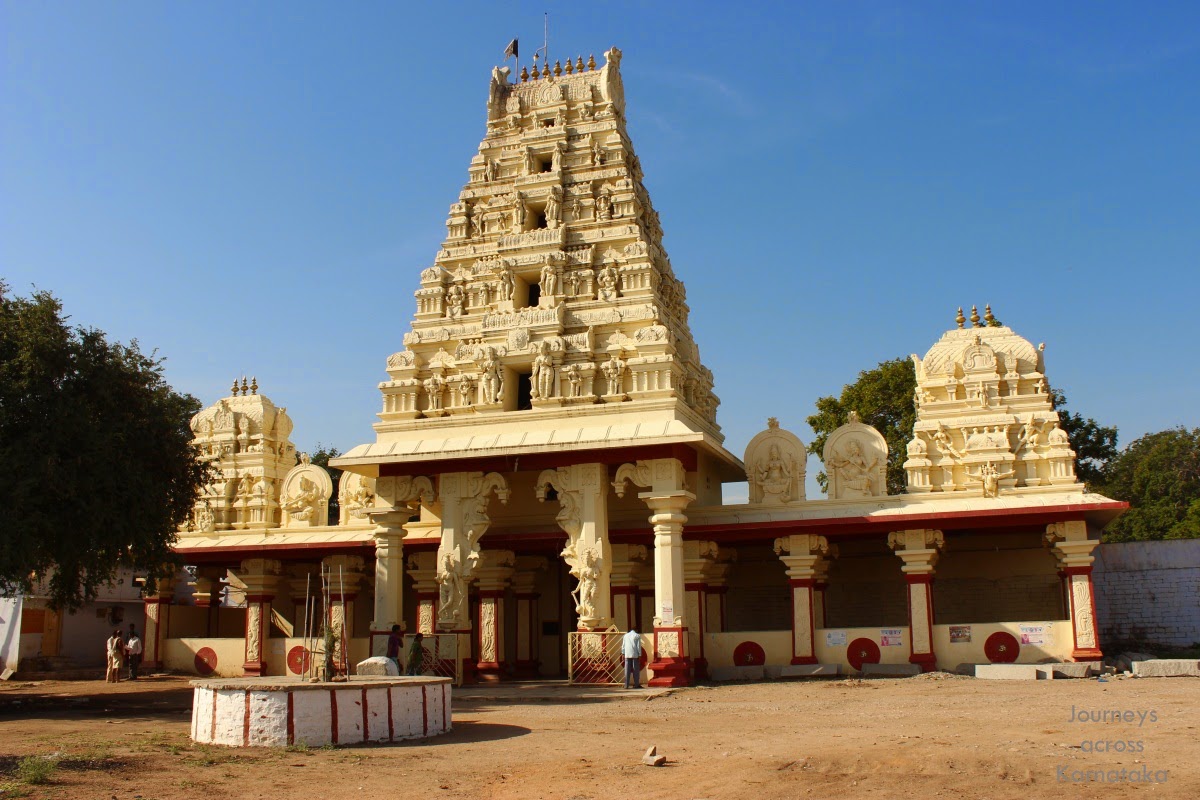 Following information is sourced from Wikipedia. The story behind this temple goes like this- Goddess Chandrala Parmeshwari is an incarnation of goddess Lakshmi. Chandrala Parmeshwari's Paduka (feet) was brought from Hongunti Hingulambika temple (near present day Shahbad town) to Sannati to free her devotee Chandravadani who was held captive by an evil king named Setu Raya. From the goddesses' Paduka emerged five bumble bees which drowned the evil king in river Bhima ending his life there i.e. at Sannati.

With this tale its clear that Chandrala Parmeshwari temple has a long history. However the temple we see today could be 600 to 1200 years old. The temple has a tall Gopura similar to the temples of Hampi. Besides being a pilgrim center Chandrala Parmeshwari temple is the place where an inscription of emperor Ashoka was found. The discovery is recent and accidental. In 1986 the roof of the Kali temple in Chandralamba temple complex collapsed destroying the idol under it. The disturbance revealed slabs with inscription in Brahmi script and Prakrit language. One of the slabs was used as a pedestal for the deity's idol. The inscription was classified as a major rock edict of emperor Ashoka . Sannati inscription is the only major rock edict discovered in Karnataka. The slab with inscription was shifted to nearby Kanaganahalli excavation site.

With Archaeological Survey of India stepping in several artefacts such as tablets, sculptures, and terracotta items were discovered. During excavations a very important discovery took place; few kilometers away from the temple, near Kaganahalli numerous Buddhist sculptures in limestone were found. These sculptures lead to the discovery of ruins of two Buddhist Stupas, one large and one small. The larger stupa is said to be ruins of a 'Maha Stupa' or Adholoka Maha Chaitya ~ the Great Stupa of the Netherworld).

Once through the gateway under the Gopura, this aisle  leads to the shrine inside. Columns are ancient but the flooring is quite new. 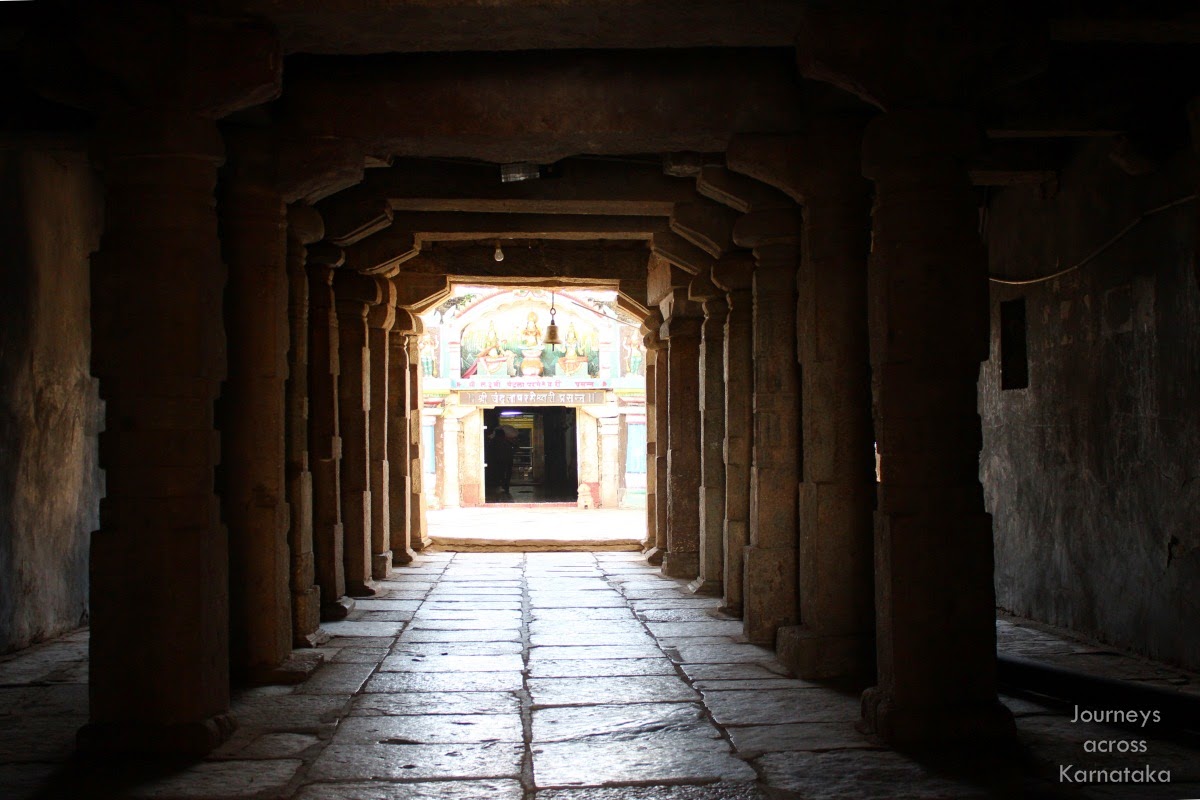 That's the main temple, inside is the shrine of Chandrala Parameshwari. 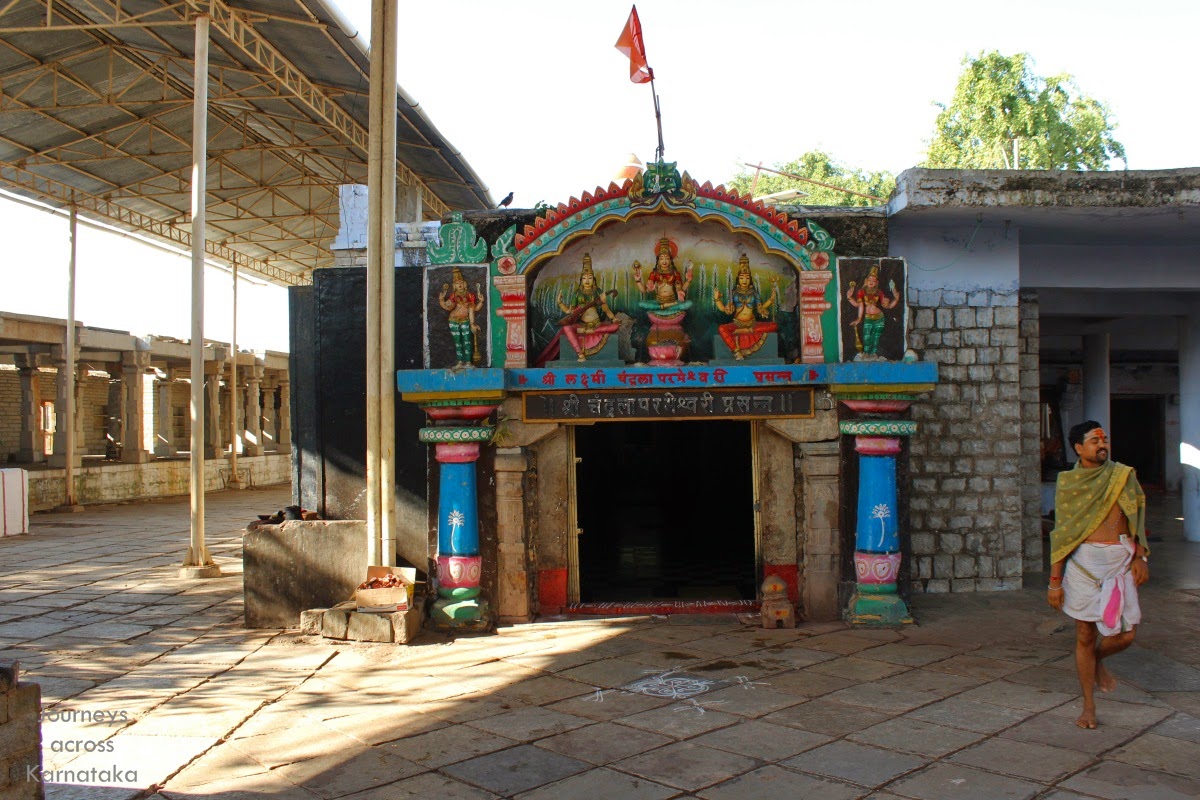 To the left- a courtyard. 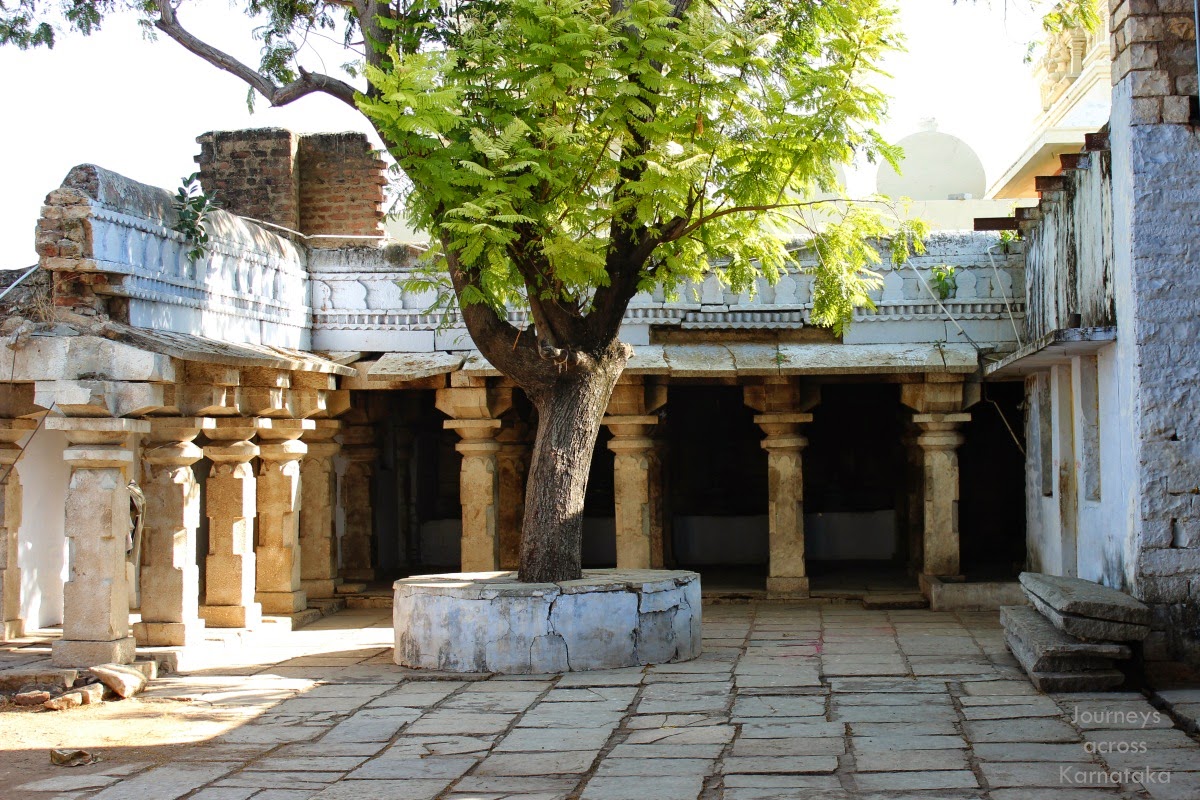 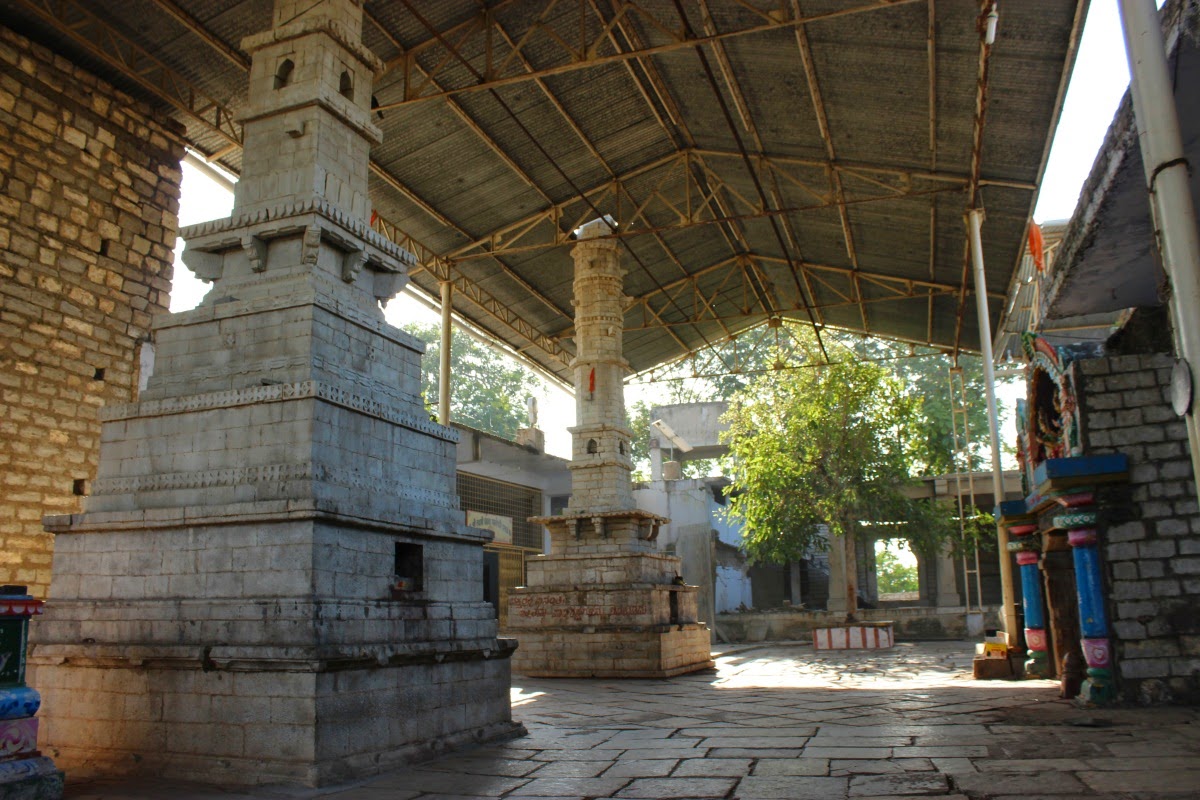 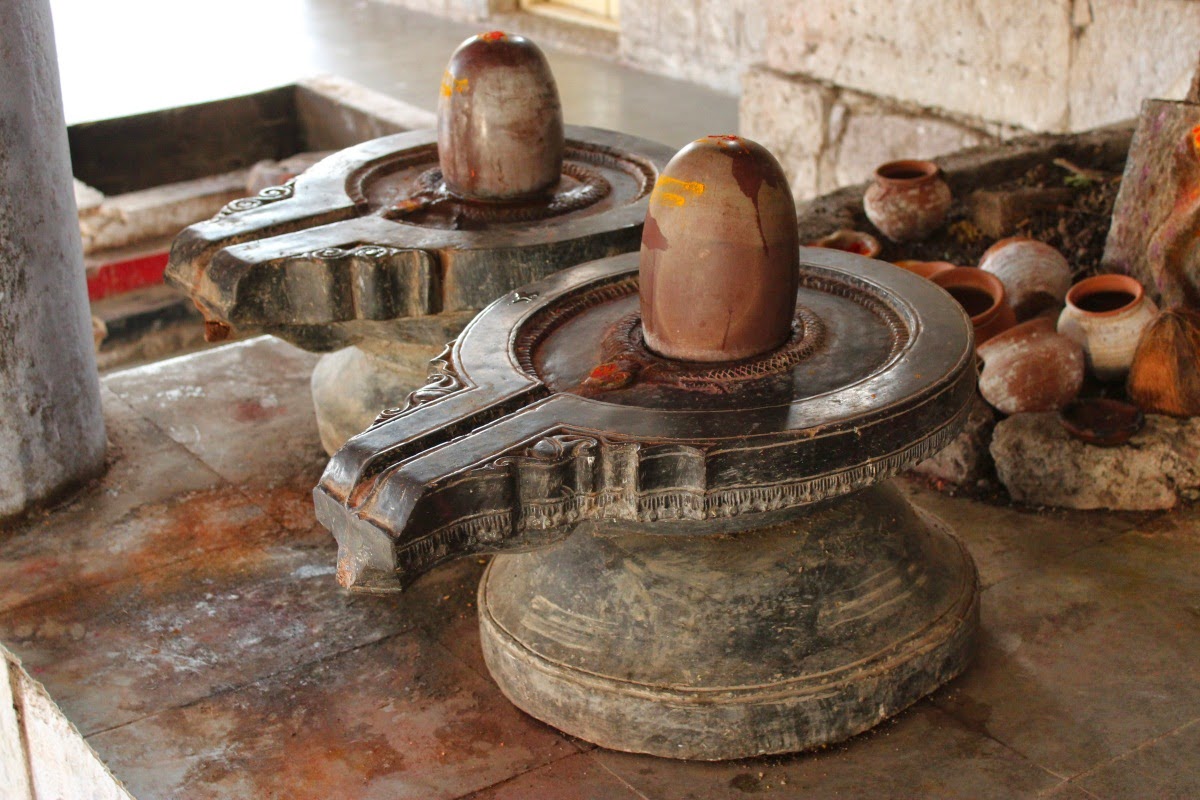 I had heard about presence of an ancient university near Sannati which was on the scale of Nalanda university. While researching I stumbled on a informative article titled Buddhist System of Education on Kamat Research Database. Do read the aritcle to know how areas of today's Karnataka was connected with the Mauryan empire, to be precise the connection with emperor Ashoka. Also the article clears the present day identity of the ancity place Suvarnagiri. Quoting that sentence: "Sannati," according to some scholars, is the modern name of Suvarnagiri, which is mentioned in Ashokan inscriptions. So Kanakagiri near Koppal is not Suvarnagiri but its Sannati.

Sir the temple is older than Ashoakan period. It's related to Hingol in present day Pakistan from where Devi came to rescue Her devotee.

I have visited this temple our family Kuldaiwst.A nice and spiritual place.The whole atmosphere gives you Shanti and religious beliefs.Thanks to trustee who are very co operative.Planing to visit again.

Visited With Family a Divine Place & Peaceful. As KulaDevatha for us, plan to visit in Near Future.