Dohaara Kakkayya was one of the prominent Shivasharanas of XII century. A contemporary of Basaveshwara. Kakkayya hailed from Maalawa in Madhya Pradesh. He belonged to Dohara community who are tanners and leather workers by profession. Kakkayya joined Anubhava Mantapa where he worked alongside Basaveshwara in reforming the society ~ social revolution at Kalyana during the rule of King Bijjala. Kakkayya like other Shivasharanas composed Vachanas, his signature was Abhinava Mallikarjuna. Following poem is one of Kakkayya's popular Vachanas-
O Linga father You made me take birth in a mean caste
I am undone as I touch you and yet do not touch
If my hand cannot touch you can’t my mind too touch you
Abhinava Mallikarjuna
Basaveshwara and Sharanas faced stiff opposition and harassment from a section of the society. Basaveshwara leaves Kalyana, goes to Kudala Sangama. Months later Bijjala was murdered and Shivasharnas were accused of the crime. Unable to bear harassment they leave Kalyana, carrying their Vachana collections. Dohara Kakkayya, Basaveshwara's sister and nephew Akka Nagamma and Chennabasavanna are among the large group of Sharanas which travels south-west pursued by Bijjala's soldiers. The chase ends with a battle at Kadrolli (a village on the bank of river Malaprabha near Kittur), Bijjala's soldiers lose and retreat. During the fight Kakkayya is injured and later dies near Alnavar- that place is named as Kakkeri in memory of Kakkayya. Today Kakkeri is known for its Bishtadevi temple and its annual fair. Bishtadevi is supposed to be one of the Sharanas who was closely associated with Kakkayya.

February 28, 2014
The day after Mahashivaratri I went to Kakkeri in search of Dohara Kakkayya's Aikyasthala. The spot is less than a kilometer away from Kakkeri village. I had expected little crowd but not a fair. Community members had organized a function to install a new idol of Kakkayya in the newly constructed temple at his Aikyasthala. 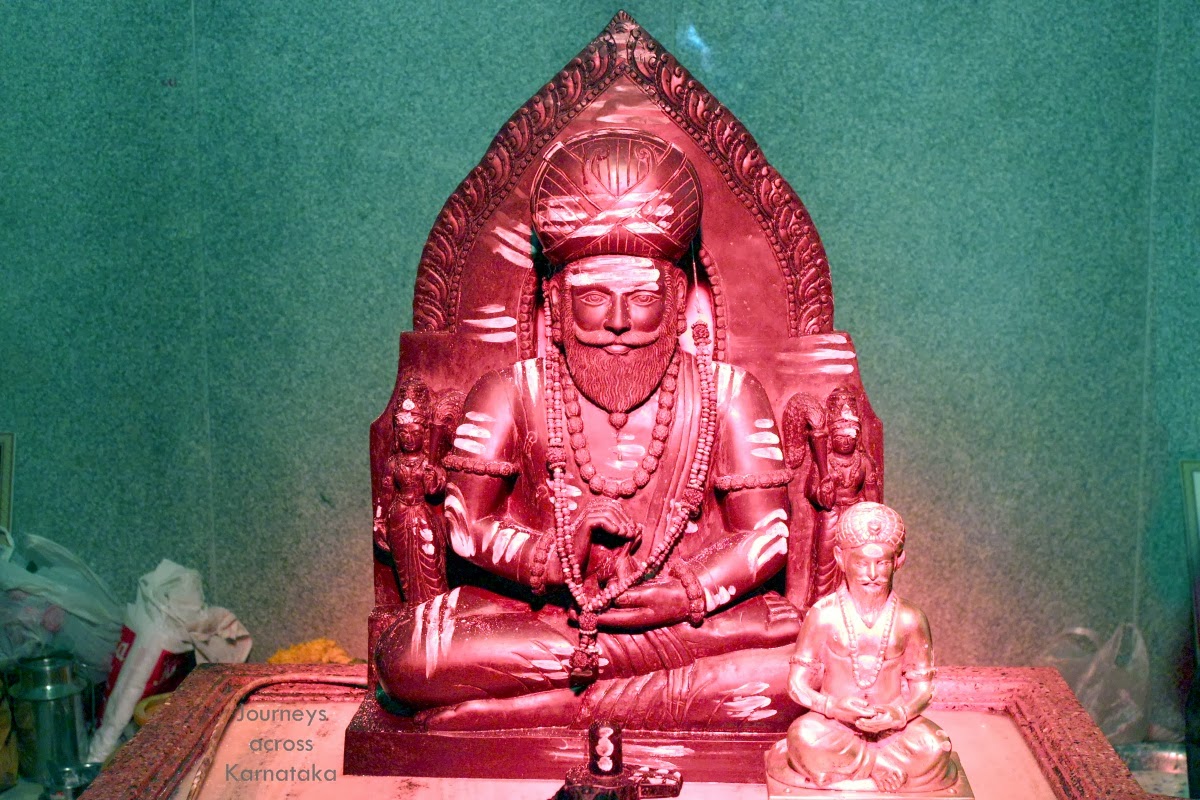 The new temple is built over the spot which is believed to be Kakkayya's tomb. However, there's no trace of the original structure. I inquired if any of the people performing rituals had a picture of the original temple. Sadly the answer was no. Today the entire campus is covered by shamiana so that devotees gathered here can be comfortable. At the base of this tree is a picture depicting a praying Kakkayya but one of the members said that picture is not right because Kakkayya was bearded. On the other side of the tree was a collection of ancient sculptures of which two are hero-stones. The larger hero-stones lower panels depict battle scenes- fighting on horseback and soldiers attacking a fort. This is the first ever hero-stone with a fort in all my travels. The upper three panels, partially damaged depict scenes of funeral and martyrs in heaven. 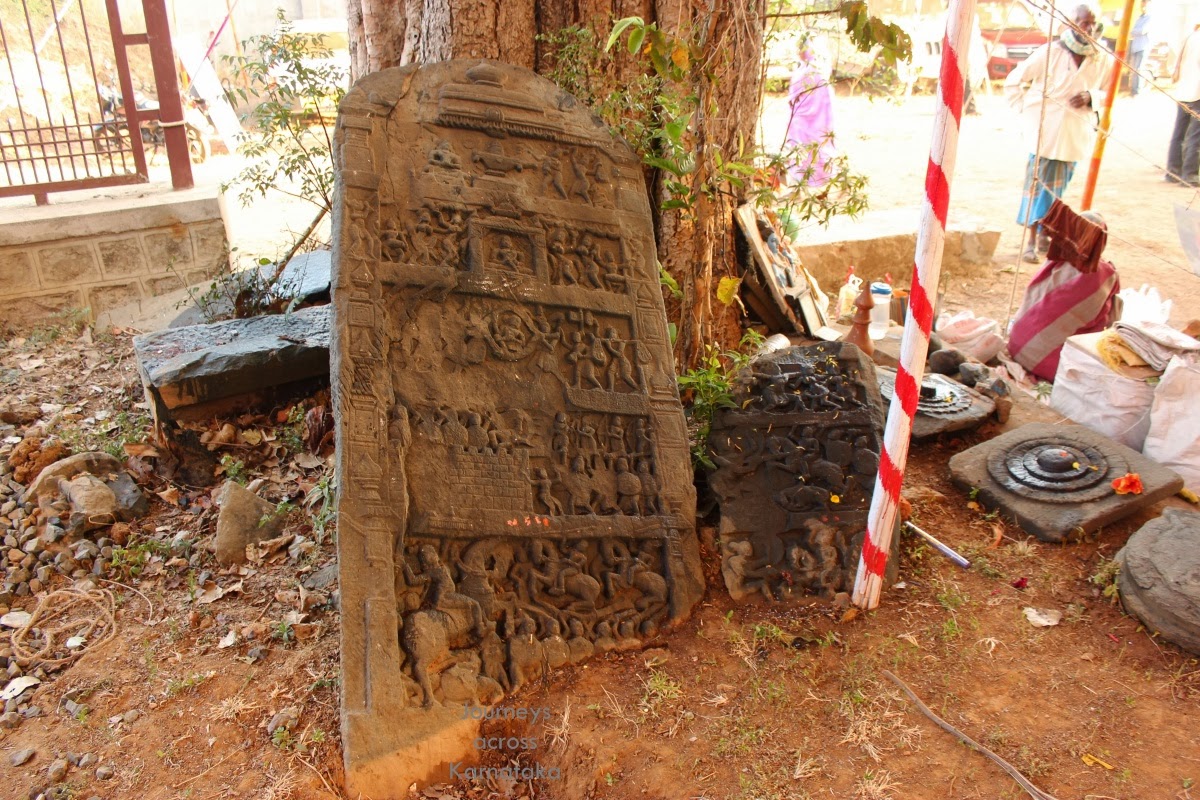 A stone's throw from Kakkayya' shrine is this stone structure is a shrine which is believed to be a place where Akka Nagamma had performed Linga pooja. This person here is one of the community members who took the trouble to show me the spot. Also he showed me a pond which is named as Kakkayana Kere. 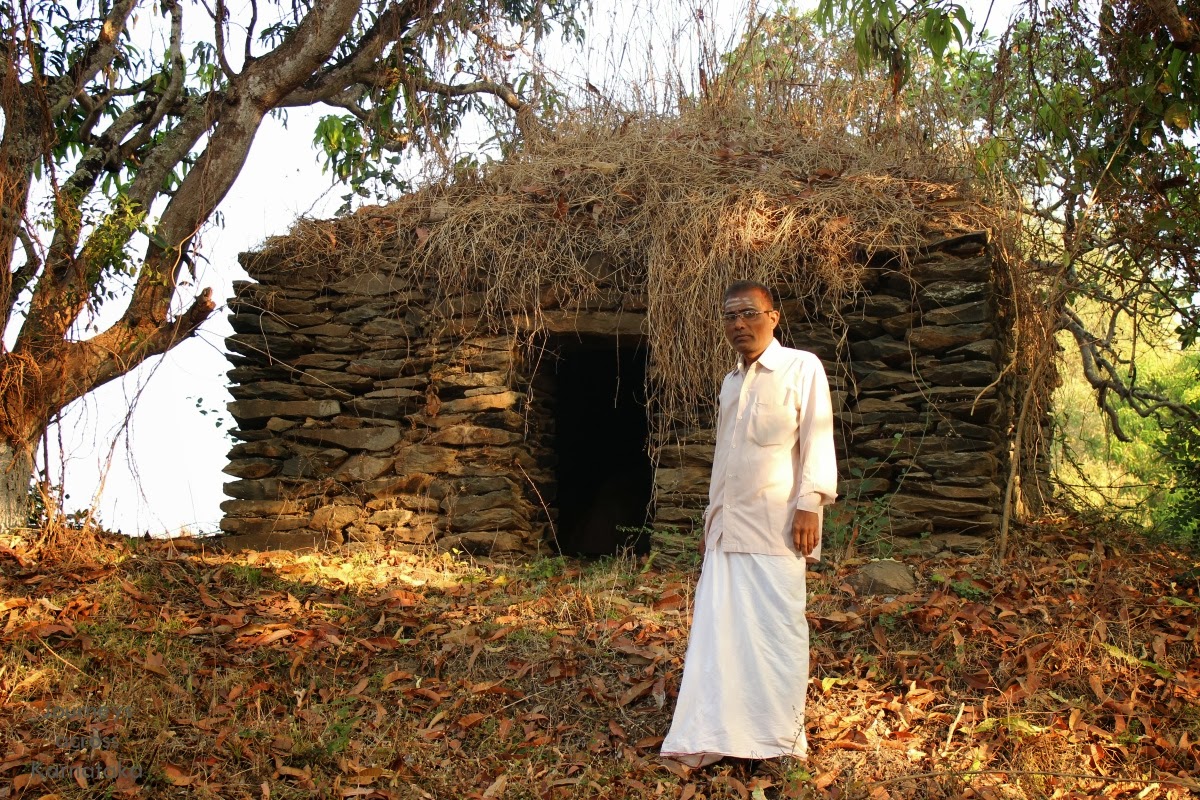 At the village square is this temple dedicated to Bhistadevi. Kakkeri is popular in this region for Bhistadevi Jaatre the annual fair of this temple. 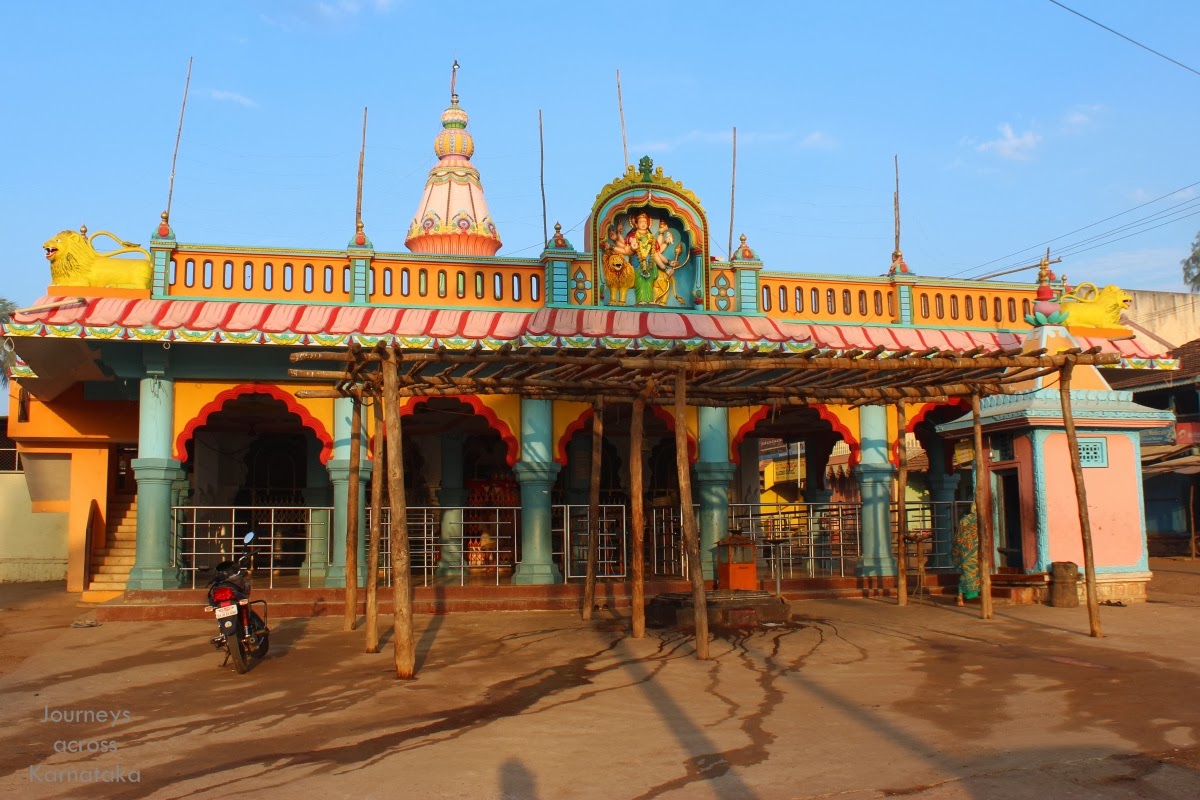 Going back to XII century: It is believed that the Sharana group split into two after the battle at Kadrolli. One group led by the injured Kakkayya came towards Alnavar the other group lead by Akka Nagamma and Channabasaveshwara went to Basappana Gudda presently known as Ulavi Basavanna Gudda in Dharwad where the group celebrate the battle victory. After spending several days at Basapanna Gudda the group moves deeper into the jungles of Sahyadri and reach Ulavi. Channabasavnna attain Aikya at Ulavi. Akka Nagamma proceeds even further and finally attains Aikya at Yenne Holae near Tarikere in Chikmagalur district.

Thanks u sir,
I have more information Dhor kakkayya

Unknown1, please share the information. it would be helpful to the readers. thank you.

Unknown2, i write about the place and whatever i could gather has been shared. regarding Kakkayya's Vachanas, you'll have to check other sources. thank you.