We set out from Dharwad to test drive my uncle's recently purchased Maruti 800. It was an old car and uncle wanted to make sure the car was worth the money spent. Uncle doesn't drive and I was given the job :) Let's go to Narasimha temple near MK Hubli. Destination set, we filled in petrol and waited for another uncle. We had a cup of tea until the other uncle returned from an errand. Three of us left Dharwad by 11:30, driving towards Belgaum on NH4. The car is pretty good for its age. We cruised at 80kmph, engine was smooth but some where in the rear, I guess from the axle there was a loud hum... perhaps a worn bearing. We passed by Kittur, Itagi cross and then we smelt the foul air surrounding the sugar factory of MK Hubli. Few kilometers later, Malaprabha river was in view- brown water flowed gracefully -proof that its been raining well in Western Ghats. The sight of water dispelled worried about shortage of water in Reunika Sagar near Saundatti.

This is a Wikimapia screen shot of our destination. Half kilometer after the bridge we turned right and entered the service road. Shri Ashwattha Narasimha Temple arch welcomed visitors here. We stopped at this new building- Gangambikeyavru Aikyavada Sthala. None of us knew about this memorial for Gangambike being completed and open to public. This was a pleasant surprise. 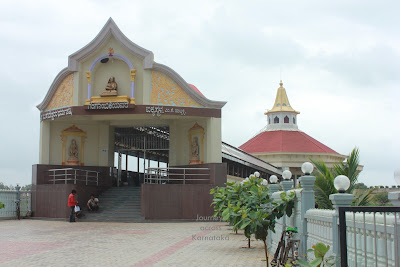 Photography is not allowed but I dd not wanted to leave without a few pictures. I asked for permission from the caretakers and got few snaps, thanks to them.

This structure is similar to the concrete enclosure at Kudala Sangama but slightly smaller.At Kudala Sangama the structure protects Basavanna's Aikya Mantapa from the waters of Basava Sagar. Malaprabha merges into the mighty Krishna which flows into Basava Sagar reservoir held by Narayanpur dam near Lingsugur. Here at MK Hubli a Shivalinga temple where Basavesvara's wife Gangambike attained Samadhi is protected from Malaprabha river. The temple is on the river bed and cannot be reached most times because of water. A 70 feet high cylindrical concrete wall encloses the temple. A bridge connects the concrete tube to the gateway on the river bank. At the end of the bridge is a beautiful painting of Gangambike by S.S.Hiremath of Itagi. 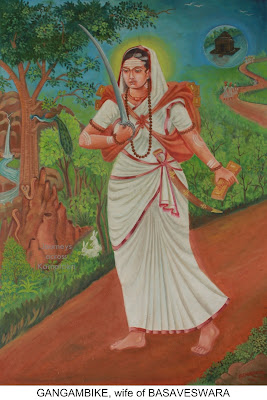 Twin stairways spiral down into this massive concrete tube. The temple as seen from the top of the stairway. Besides us there were four other visitors. The place had a peaceful ambiance. 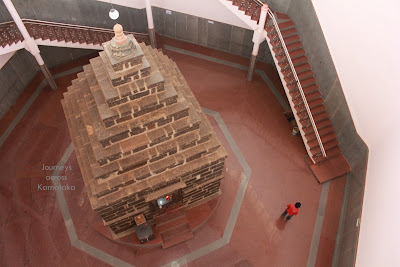 This is temple is at least 800 years old if not more. 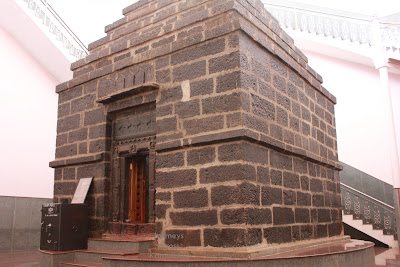 A stepped Shikhara crowns the temple. 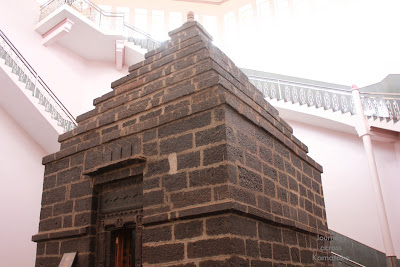 Namah Shivaya, The Shiva Linga inside is not exactly cylindrical but bulges out in the middle. The temple's door is pretty narrow and low. The temple's door-frame is eye-catching, not heavily decorated but it's beautiful. The top resembles a fort's wall. 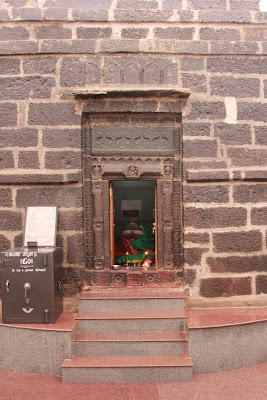 A closer look at the upper portion of the door-frame. Sun and Moon embossed in two cells. I feel this Indo Saracenic design. 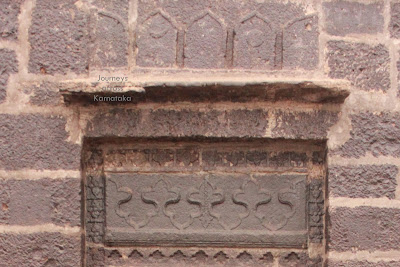 A closer look: notice the links forming a chain with a pendant at the bottom? This design can be seen commonly in Adil Shahi buildings like Ibrahim Roza. I remember seeing a similar but a very detailed chain at Anjaneya temple at Munvalli fort. 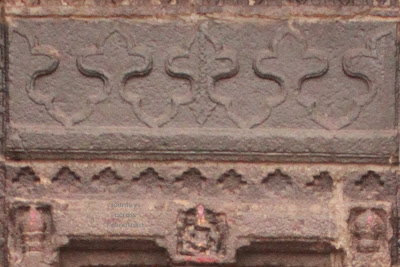 Back at the top, the gardener was proud of his little garden. The place is a nice spot for a family outing, with home packed lunch. 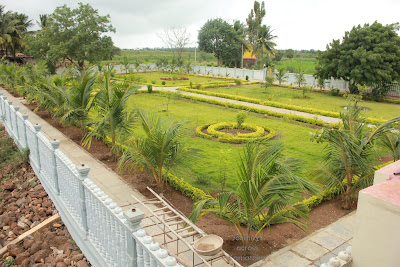 Gateway, bridge and the dome as seen from the garden. 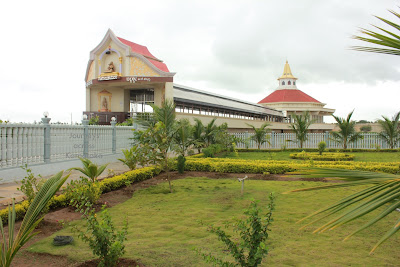 We head towards our planned destination- Narasimha temple which is a two minute walk from Gangambike memorial. We stop to take a picture of the structure. Notice the water marks on the concrete tube? 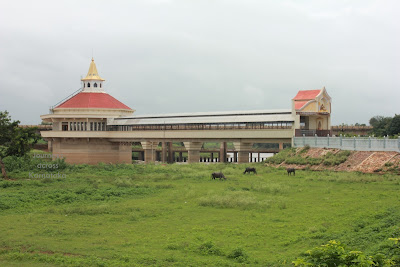 Gangambika Memorial memorial was designed by Kudalasangama Development Board. Work began in April 2009 and completed in June 2011. The memorial was inaugurated by Karnataka's former chief minister B S Yeddyurappa on Januury 14, 2012.

Great! Good article. thanks for the information.

63Place looks peaceful, wasnt knowing about this place,being an ardent devotee of Lord Bassavanna my father will like this place. Have to plan to visit sometime.

You must visit this place, its quite easy to reach from either Dharwad or Belgaum. If you wish to offer flowers and coconut, its better to carry them because there are no shops near by.

When I saw the picture of Gangambike with sword in her hand , was wondering why she is pictured so, being a Shivasharney & wife of Bassavanna why she is holding a weapon!! I got an answer in Kudala Sangama thru pictures which were displayed to give some info abt those days. During Kalyana Kranti all Sharans/disciples scattered with Vachana Sahitya to protect it from communal people who were on a rage to destroy,I felt the picture of Gangambike depicts the situation in which she is carrying scripts of Vachanas, trying to protect it.

@Manjula Umesh - you are right this picture depicts Gangambike protecting the Vachana scripts from forces opposed to Basavanna's social reforms. During Kalyana uprising Shivasharanas fled to safety of hills and jungles such as Ulavi and Srisaila.

Very good article sweet and short... i tried to read google baba about her... she was trained for fighting and knows use of sword.... we should have lessons on her in school, it is so rare and great women .. .this is missing in our modren life