July 28, 2012
Our plan for the morning is to see Kadebagilu, Gagan Mahal, Chintamani and Krishnadevaraya Samadhi.
Arriving from Gangawati, Kadebagilu greets visitors to Anegundi. Kadebagilu means 'Last Gate' in Kannada. This is one of one of the gateways on the outermost wall of Anegundi fort. This might have been a Sunkada Katte- a sales tax collection post during Vijayanagara rule. 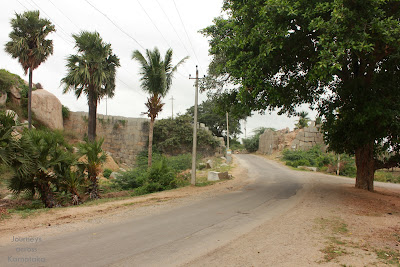 Ruins of rampart walls can be seen on this rock hill. If you take a closer look at the hill, you can see a number of shelters and hiding places. Close to the summit in the middle is an rock outcrop which offers excellent shelter, that might have been a sentry point. 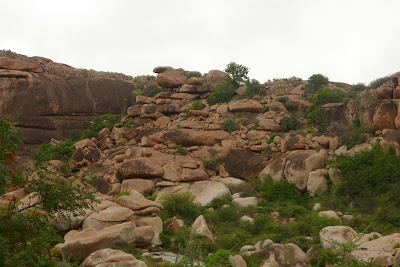 Entering the fort. Notice the massive individual stones forming the wall. Some of the stones are 4 feet tall and 6 feet long- wonder how the stones were dressed to match perfectly and then put in place. Amazing! 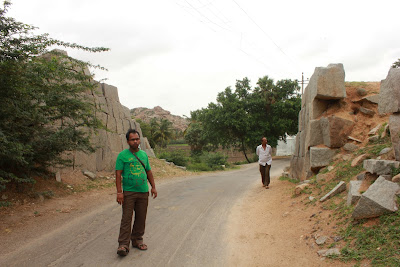 Image of Ganesha near Kadebagilu. 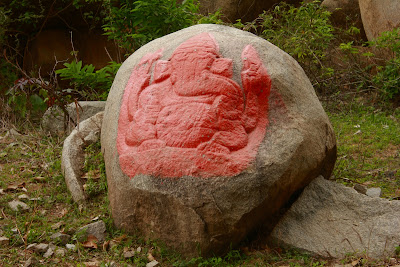 About 100 feet from the gateway is an ancient temple with a 10' high rock sculpture of Anjaneya. 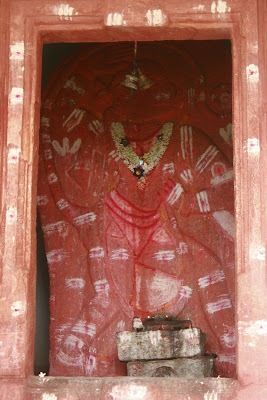 Statue of Sri Krishnadevaraya just outside the Modalane Bagilu or the First Gate. Malatesh observed that the statue's face resembled Dr. Rajkumar's face very closely. I guess that's understandable with Rajkumar having played the lead role of the Kannada cinema Sri Krishnadevaraya. 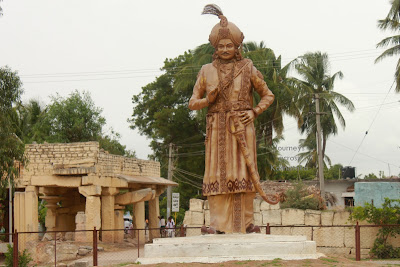 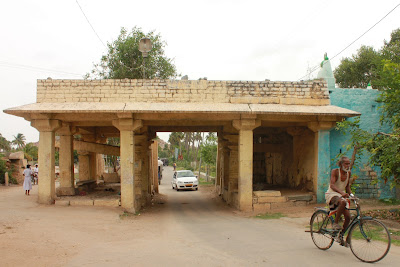 First stop is at Gagan Palace on Royal Street. Construction seems similar to Lotus Mahal of Hampi. The palace is kept locked, tourists are not allowed in it :( 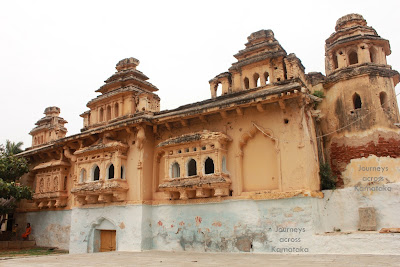 Close by is a handicrafts center where local people make things out of banana fiber which is available locally. Things made and sold are mats, hats, bags, baskets, pen-holders, and many more useful stuff.. they aren't really cheap. Even if you don't buy anything, a visit is worth the time.

Next , we move to Chintamani. The pillared structure on the left is the gateway to Chintamani and on the right is a Brahmin Matha.From here we need to go by foot, about 200 meters to Chintamani, place where Rama performed penance. 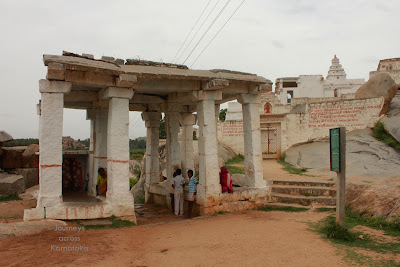 That's Tungabhadra river and on its rocky bank are two ancient stone structures. Perhaps they were  travelers' rest house. 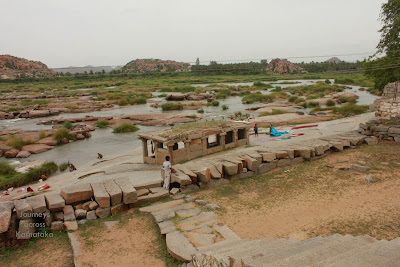 Tortoises and a fish on a wall. 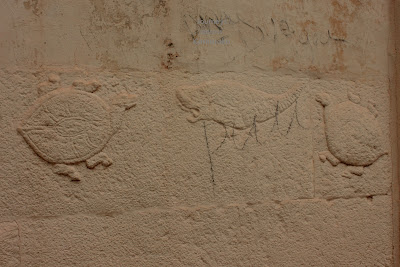 Another gateway, a Vijaya Stambha and a row of serpent sculptures. 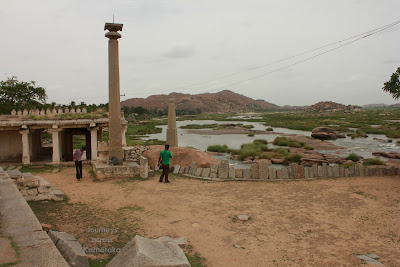 During my first visit, I was told that this is the spot from where Rama shot the arrow to kill at Vaali the king of Kishkindha, a son of Indra and the elder brother of Sugreeva. Vaali and Sugreeva were engaged in a fight on the hill across the river when Rama shot the arrow at Vaali's back. A bow and an arrow are engraved on the floor here, just ahead of the sculpted block (marked in white oval). 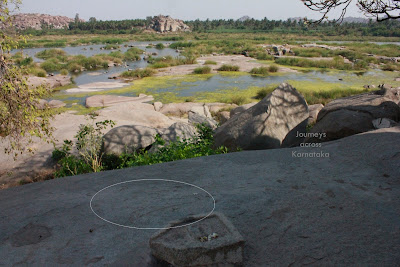 A larger drawing of the arrow. It looks more like a Trishula. 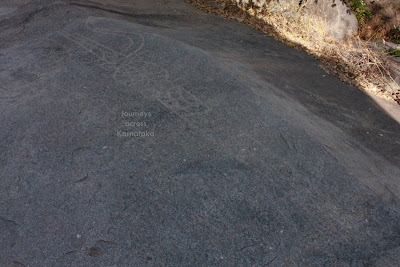 It is said that Rama feels remorse for having killed Vaali and performs Yagna and penance to attain Shanti ~ peace of mind. Entrance to rock shelter under which Rama stayed many days afters Vaali's killing. 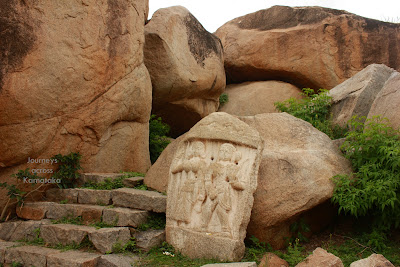 This is supposed to be the place where Lord Rama did penance. 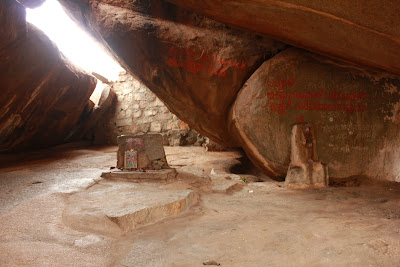 Next we head towards Vijayanagara empire's most popular king's tomb. This 64 pillared Mantapa is said to be Krishnadevaraya's tomb. 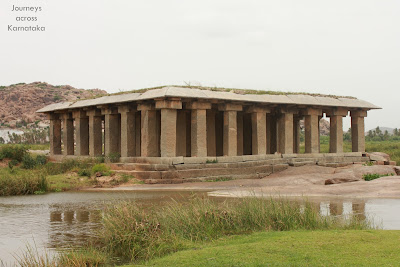 As you see, the building is an array columns. It's a structure measuring about 50' x 50' with 64 columns of equal size in a 8 x 8 array. Does this have a connection with the chess board? Unfortunately, there's no information available. We had to wade through the flowing waters of Tungabadhra to reach the monument. Water felt great! 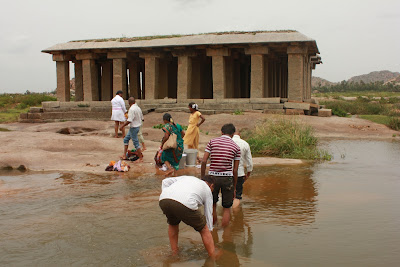 One of the aisles in the tomb. 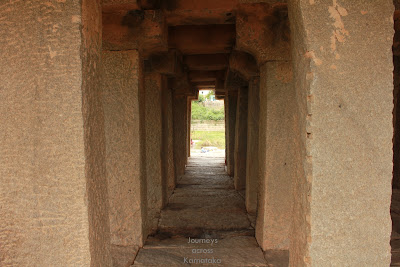 An interesting variety of fishes are embossed on the slabs forming the steps. 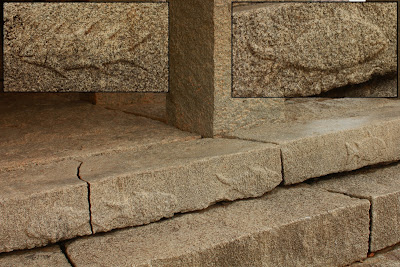 One of the sides has a crocodile embossed on it. I do not remember seeing any tortoises. 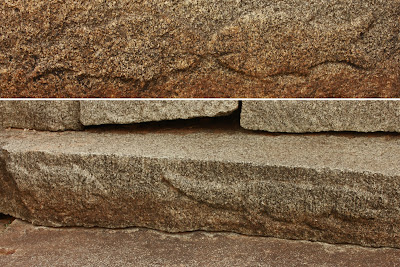 View of Chintamani from Krishnadevaraya's tomb. Rocky hill in the background is Rishimukha Parvata. 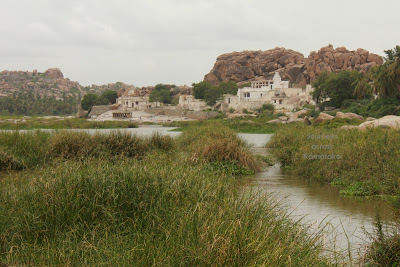 From here, boats ferry people to Nava Brindavana. I saw 25 to 30 people squeezed into a small boat ..hardly a surprise, safety is not a concern to the boat operator.

If you want to see all places of Anegundi, mentioned at the beginning of the post, plan two full days visit and be prepared to walk and climb.

We head to check out the fort near Shivapura town and Hosaharalapura village.

The 64 pillard construction is stated to be the cremetary where Sri Krishnadevaraya was cremated after his death.

It is saying that sri Krishnadevaraya has excelled in 64 fields of the Education relating to a King, he was cremated in this 64 pillar construction.

Wow, to excel 64 fields of education one has to be a super genius. Thanks for the input.

very very thanks Sathyanarayana B
for give information about 64 pillars