Discovered while scanning area surrounding Pavagada in Google terrain; estimated height of Nidgal Betta was 200 meters. Its a stepped hill; roughly half way up is a small plateau with ruins of a fort and the upper half of the hill is a peak. Nidgal fort occupies plains and slopes of the hill. Within the fort walls are ruins of a palace, few temples with inscriptions and water tanks. Rampart walls are built on slopes.

I reached Nidgal village around 8 AM, stopped at Rama temple, spoke to few elderly folks who appointed three teenage boys as my guides - Nagesh, Naveen, and Thippesh. Rama temple is situated on the hill's base, very close to it a paved path leading to the fort gateway. It wasn't easy walking on the paved path because it was uneven.. probably a flooring was laid down over the paved surface which has decayed over time. The first gateway was an high arch, half kilometer later was the second gateway with a security office. 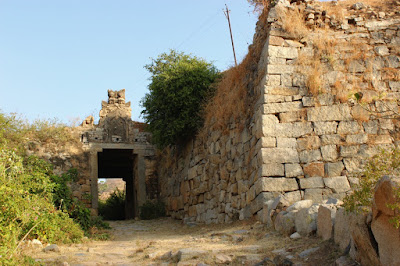 The architecture is definitely Vijayanagara.. four-sided pillars divided into 3 sections resulting in 12 faces; each of the face would have murals of plants, birds, fish, animals, women, men, geometric and floral designs, and religious symbols. The paved stones seen here are well tread and smooth.. so smooth they are actually slippery. 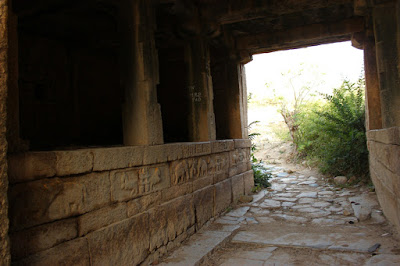 As we climber deeper into the fort, the gradient was increasing. One of the stretches had a flight of stairs. which lead to another gateway. The passage was narrow and flanked by high walls (see inset). 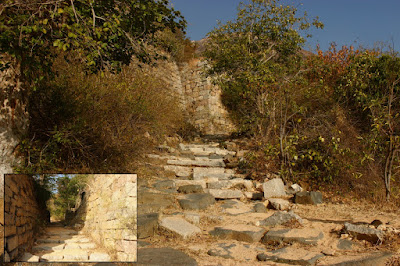 We have a long way to go.. on the right are rampart walls zigzagging up the hill. Wonder if trees present back then.. they could cause serious security problems. BTW, most trees seen her are pretty young, no ancient trees seen here. 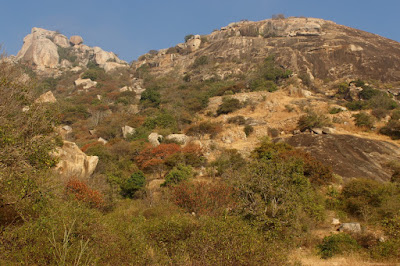 One more gateway. My guides, Nagesh, Thippesh and Naveen. These boys spoke mostly Telegu among themselves. Nagesh and Thippesh spoke Kannada but Naveen could speak only Telegu. One of the stones in the steps had a geometric symbol - a triangle with criss-crossing lines (see inset). Remember seeing similar symbol at Chandragutti fort in Shimoga district. 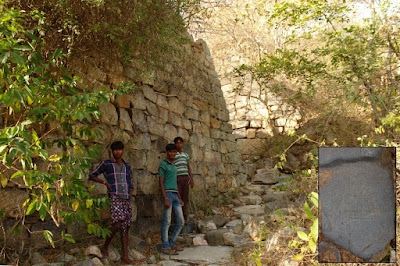 The ground were treading on was sandy.. this indicated that rain water flowed downhill on these paths. Further into the fort was ruins of a Hindu temple. The terracotta Shikhara was damaged (see inset). 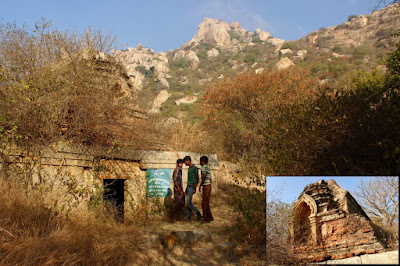 The terrain was interesting. One of the rocks had a sculpture of Nandi (Basavanna), A Shivalinga and a human figure with palms joined - doing Namaskara. Close a maze of mud walls - I it was a palace once upon a time. You can see similar ruined walls at Chitradurga fort too. Here's a section of the wall - see how tightly dirt is packed - it has a foundation of dressed stone blocks. 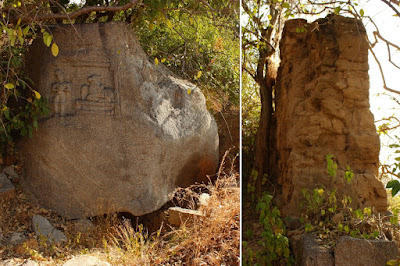 Now the going got tougher, the gradient was steeper.. luckily we had cover of trees, it was partly shaded. Happened to notice a creeper with bulb like things hangings. They seemed lit lit up lamps (see inset). Tamarind trees were pretty common on this hill. 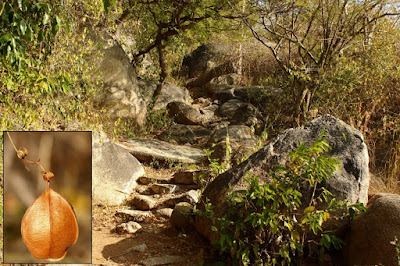 Another flight of rough-cut steps with a gateway (see inset) at the end. My guides were an energetic bunch.. I was happy that I could keep up with them most times. However, I wasn't as nimble as these youngsters. 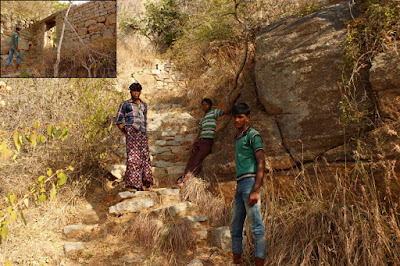 This part of climb was little tricky, thought not very steep the surface was little slippery. So I had to be careful, especially with the camera bad hanging down from my shoulder. 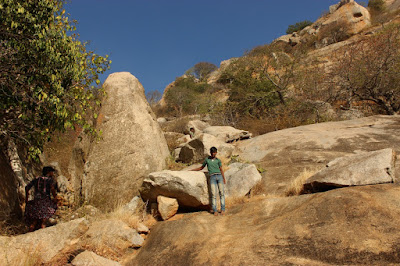 One more gateway. Notice the wall on the right, a large running up from the middle towards its base. 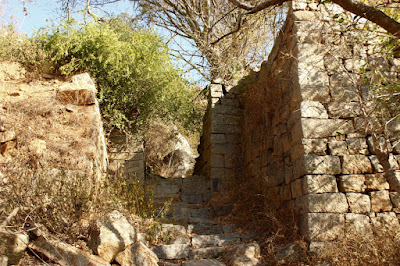 A rock-shelter.. definitely would have been inhabited by humans long time ago. This wall seen here is a recent creation. Nagesh told me that this is a shop during Basavanna Gudi annual fair on this hill. Probably it was also used by tamarind contractors to store their pick. An idea! This is a good spot to camp.. spend a night here. 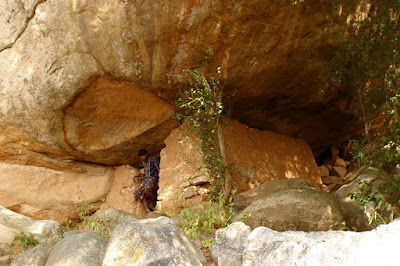 We are very close to the first stage of the hill. by now Sun was blazing down fiercely. From this point it was a 10 minute climb to the walls seen here. 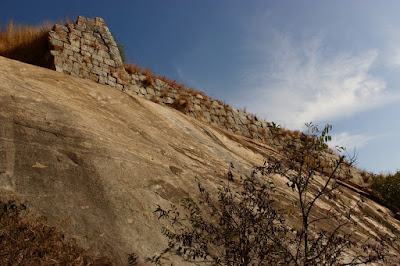 Ah! Finally made it to the first level. Lovely reddish yellow sun-dried grass. Down the slope are the ruins. 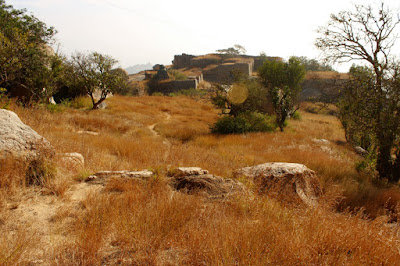 Have heard of this place but never visited. Thanks for sharing Siddu.

Thanks Subbu. September to November would be a good time to visit Nidgal.