The 15 kilometers road to Sangolli was a mix of tarred and dirt patches but not uncomfortable. About a kilometer before Sangolli a direction board at 4-way junction caught my attention. The arrow pointing to the left was for Turmari, the village where many scenes from Shankar Nag's first movie Ondanondu Kaladalli were shot. main location being Turmari Goudaramane. It was a long time wish to see the village and the house but I was not able to locate the village until this moment. Another destination got added.

Sangolli is a small village and the bus-stand happens to be at western end. I stopped at a shop selling cool drinks and tender coconut to inquire if there was any memorial or a museum for Krantiveera Rayanna. No museum but there's one community hall named after Rayanna and a statue just across the street. While the shop keeper pointed out the directions, another person got into the conversation- Mahesh from Kittur, volunteered to show me the statue.

That's Rayanna, with a sword and a shield. 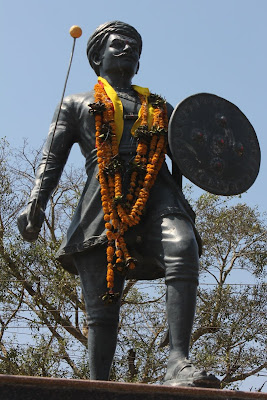 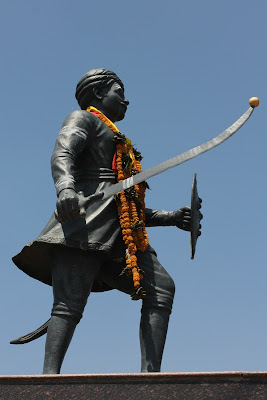 That's the community hall mostly used for weddings. Few villagers were busy washing the floor. I asked for the hose and ran water over my feet and arms ...it was refreshing. 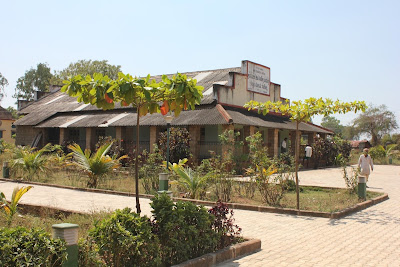 One of the villagers invited us to see the temple dedicated to Rayanna. 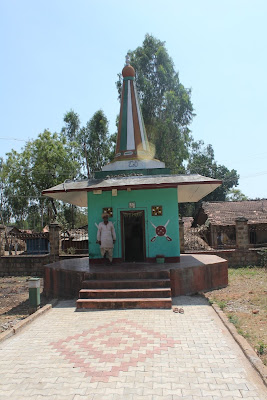 That's Rayanna's idol flanked by two wooden weights used for bodybuilding workouts. The one on the right is an ancient one, used by Rayanna himself and the one on the left is a recently to complete the tradition of maintaining a pair of weights. These weights are to be twirled around to strengthen muscles in the wrist and forearms- warriors needed powerful arms to wield sword & shield. 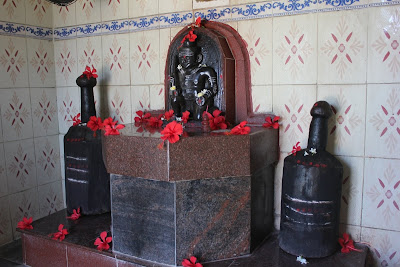 With eyes shut Rayanna seems to be meditating. His face projects a serene expression. 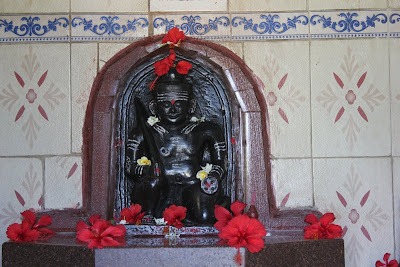 I said bye to the temple caretaker. I mentioned my plan to visit Turmari to Mahesh and he agreed to join me. We headed back to Sangolli bus-stand, had a lime soda at the only cool drink shop and bid bye to Sangolli. We head towards Turmari, 7 kilometers away.

At Turmari we asked our way to our destination, Shri B C Patil's house. As I drove through the streets I tried to recall scenes from Ondanondu Kaladalli ...even though the village has changed over the decades, some remain unchanged, like the stone-walls between houses and streets. Goudaramane is on the village outskirts. 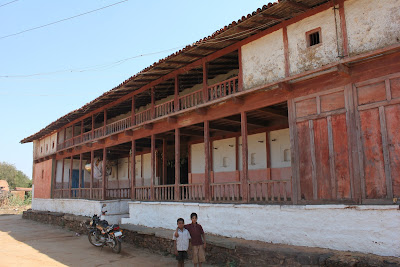 The moment I saw the house lot of scene's from the movie flashed before my eyes... 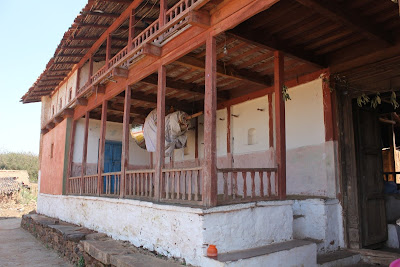 The cement floor is a recent change, back then it was dirt floor. 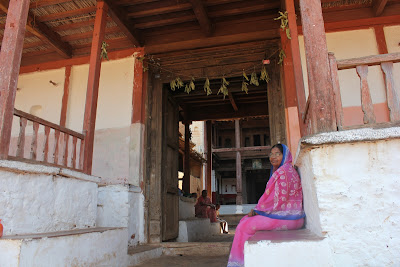 That's the main entrance. I introduced myself to two men of the Patil family and asked permission to see their house. The younger member Umesh Patil showed me around the house. 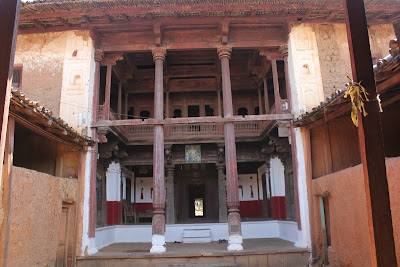 Portions of this 300+ year old two-floor mansio has undergone changes but it's recognizable ...my mind just compares the present to the past. Umesh told that originally the house had 100 doors. I did not bother to ask how many rooms.

Massive teak pillars adorn the center of the house. 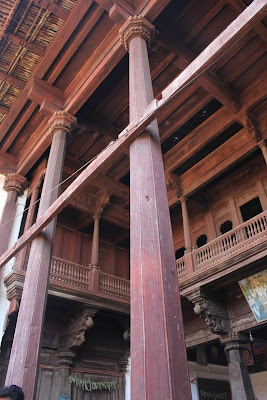 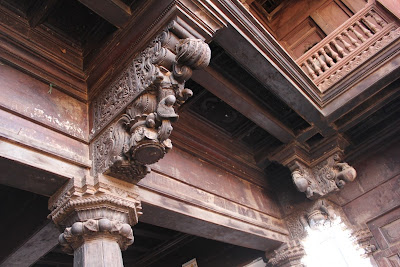 We climbed up the wooden staircase to the first floor. A multi-purpose hall. Important part of Ondanondu Kaladalli were shot here. Closing scenes of the story are shot here. This gallery is similar to the gallery in Sirsangi Vaade. 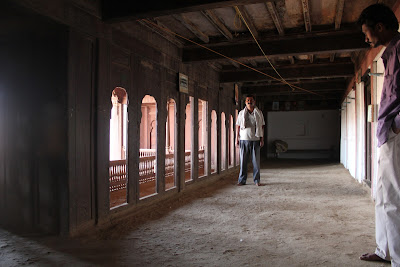 Looking towards the main entrance. 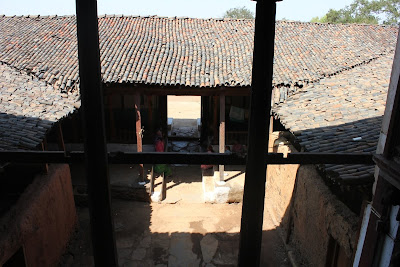 Another staircase (not the one we took earlier). The movie's hero Gandugali, gets stabbed and tumbles down this staircase. 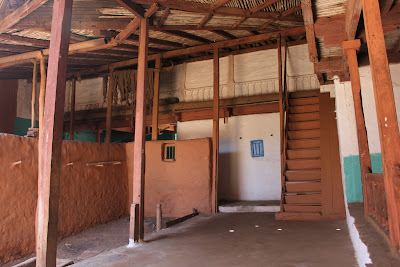 Thanks to Umesh for patiently showing us around. Few members of the Patil family actually live here, most of them have migrated to cities. I'm aware of the difficulties of maintaining such a house... its labor intensive work, yet the house is maintained well. One of the ladies told me that the walls are built of triangular mud bricks. I got to see few where plastering had fallen away. I thanked the members and we left. Mahesh suggested a shorter route to NH4. As we drove, Mahesh told that we could see a Lingayath Mahta at Hunasikatti. Fine. 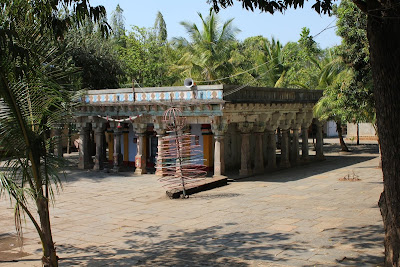 Hosamath was cool and peaceful. 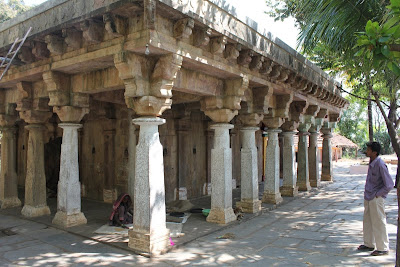 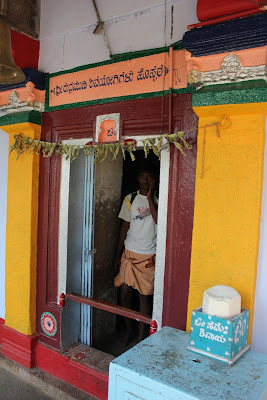 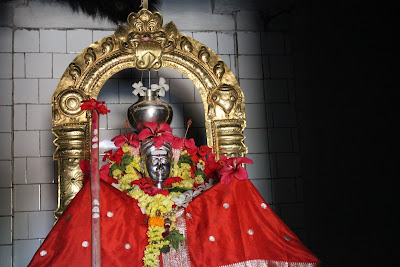 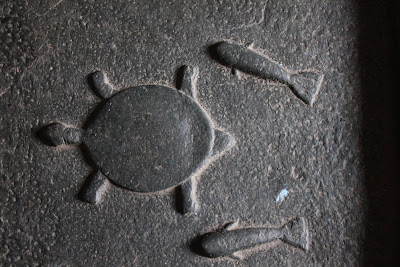 Four monkeys but only eight limbs. When you look at individual monkeys, you can see four limbs. There was also a short inscription dated 1912 above the doorway. 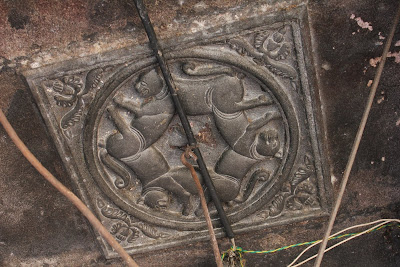 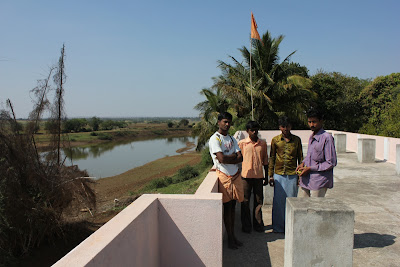 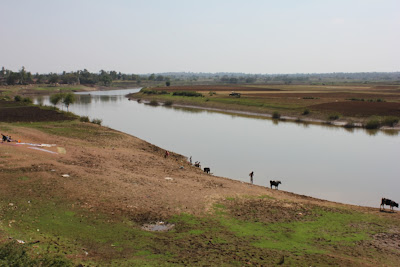 The Swami told us to visit during rainy season to see Malaprabha. I could imagine the water and the greenery. I've decided to visit sometime between August and October this year ...hopefully.

Under this tiled roof is the grave of the artist who built this temple. 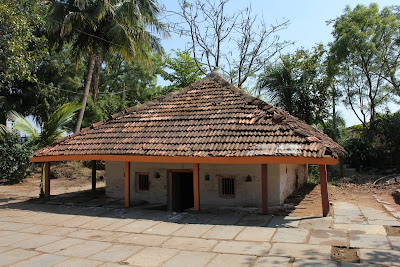 A typical Matta will have a chariot. Hosamat too has one. Those are three of the four half buried stone-wheels which have given way to lighter wooden wheels. In the background you can see sugarcane fields, probably Matta's land. 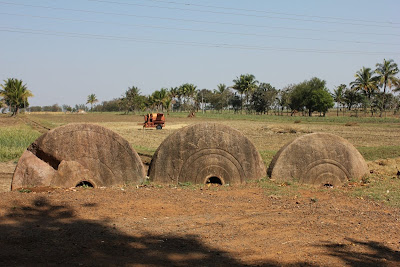 Thanks to Mahesh, I got to see a wonderful place. However, I missed out seeing Shri Kumaraswamiji's house. We drove to Itgi Cross on NH4 where Mahesh got off and I drove towards Dharwad. Route traveled.. 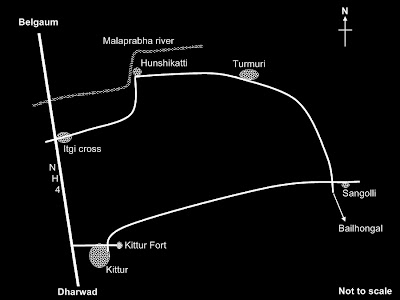 Just loved the pics of carving of Tortoise and monkey . Just amazing .

Thanks a ton brother.
Really you have done a good job.
We dont know many places around our cities and you are showing us through your blog. I very grateful to you. Keep it up brother, tell us more stories.

@Team G Square, tortoise & fish and monkey carvings are truly amazing. There's so much beauty in those simple looking art-works.

@Amit, off late I realized every nook and corner of Karnataka has gems hidden. We need to explore and discover them.

I agree with Amit...Its really a wonderful article (yes, as usual) with so much of historical details. I appreciate you interests ("We need to explore and discover them"..) and efforts.

What about the distance between the beglaum to sangolli....
rayannas family members are the in sangolli or not?

@mahant Belgaum-Kittur-Sangolli = 60km approximately. Looks like none of Rayanna's family members live in Sangolli. They might have moved to different places to escape British army officers inquiries and never returned.