I heard about Sudi while researching information about Gajendragad. Sudi, a village between Ron and Gajendragad, has two ancient temples, two stone Shiva Lingas, a Basavanna, Ganapati and a twin towered temple with a Basavanna and two Halegannada inscriptions. 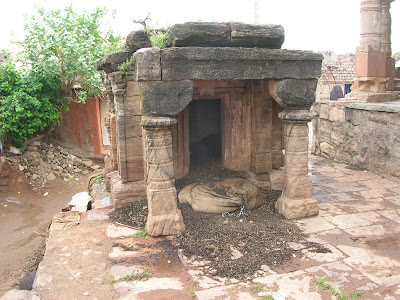 The temple is surrounded by houses. The temple is regularly used for a variety of activities by the village people. Some farmer did not bother to clear the heap of green-gram waste. 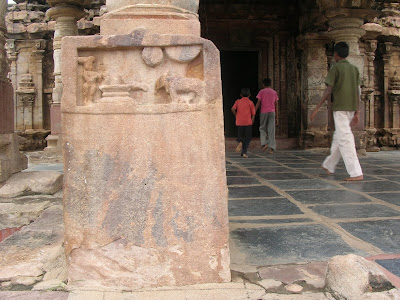 An inscription at the temple entrance. A local priest performs pooja everyday. 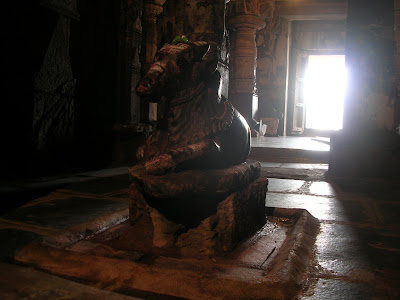 A little Basavanna sits opposite the sanctum sanctorum. 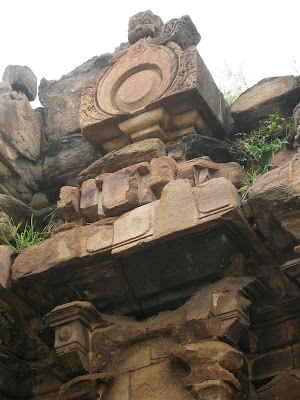 Architecture is Kalyani Chalukya, similar to the temples of Pattadkal and Aihole. 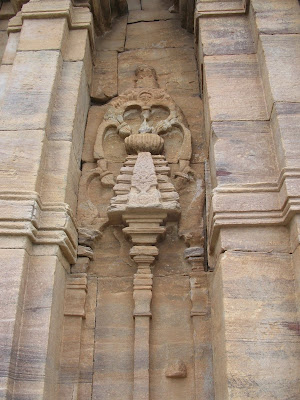 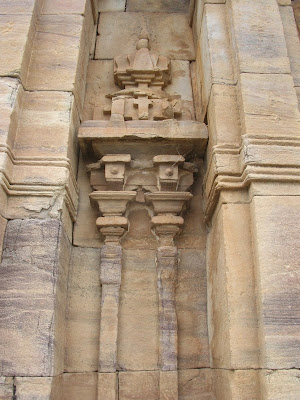 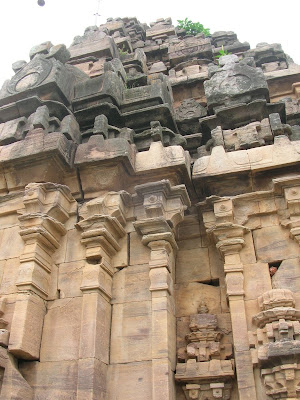 Very close to Mallikarjuna temple are two eye-catching Eshawara Lingas, a damaged Basavanna, a huge Ganapati and an open well called Nagakunda- all enclosed within a compound. 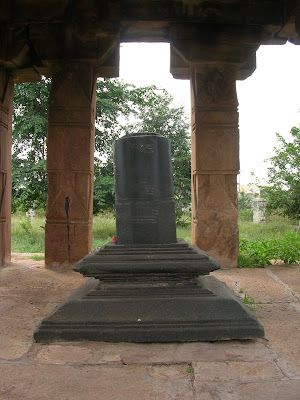 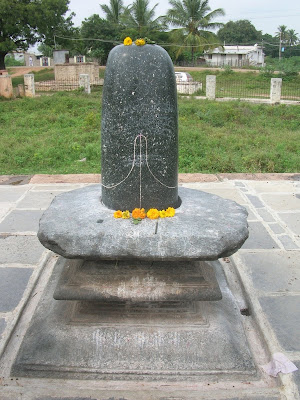 The Basavanna with a damaged snout. 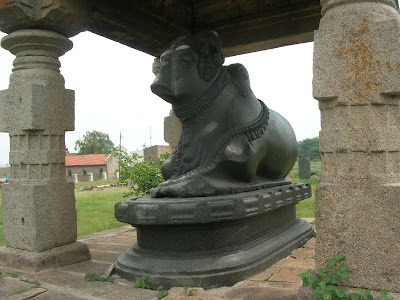 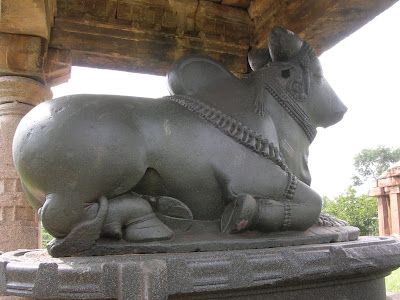 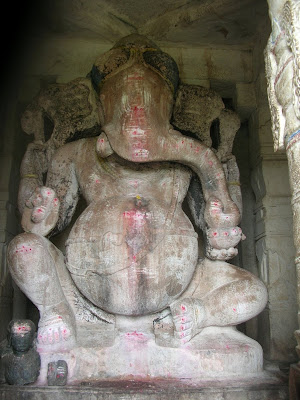 Belly is so big and round! The idol gives an impression that tummy is heavy with food. A snake is tied around the Lord's midriff. 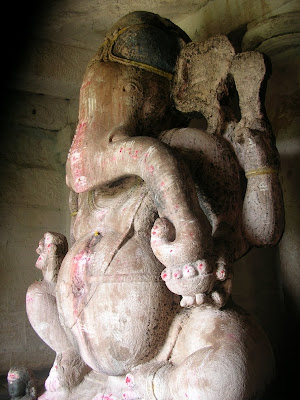 Few feet from the Ganapati temple are two idols of two robbers who were punished for their evil deeds. This half buried statue is one of them. 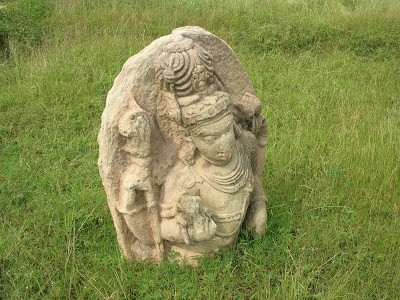 The decorated stepped well. In the ancient times, every temple had one Kalyani. Water is an essential component of pooja items in any temple. 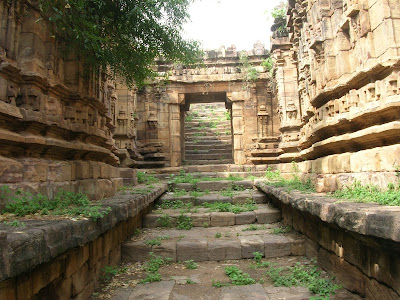 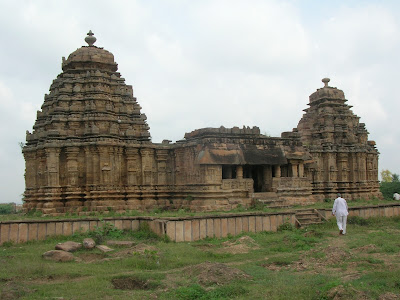 This temple is located on the outskirts of the village right next to a high school... could be a pre-university college. I was shocked to see trash littered in & around the temple; playing cards, bottles, cigarette butts, gutka sachets, and what not. Utter disregard to the monuments. 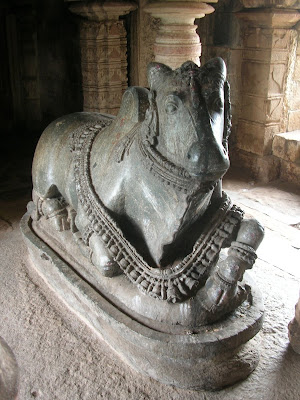 However, this beautifully decorated Basavanna is pretty well preserved. 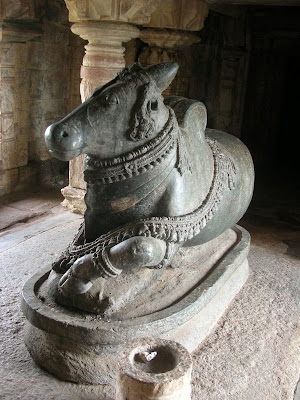 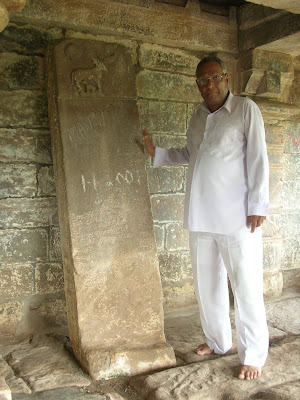 I sent an email with a photo of the defaced inscription to an ASI official in New Delhi. No response until now. 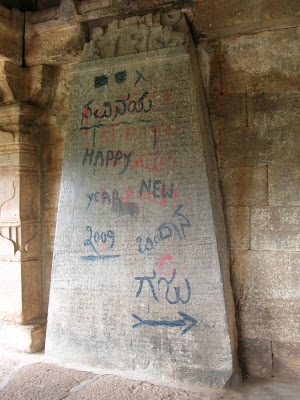 A close look st the text... neat and well rounded. I cannot write, my mother-tongue, so neatly on a paper :( Makes me wonder how those guys sculpted such neat letters on stone. 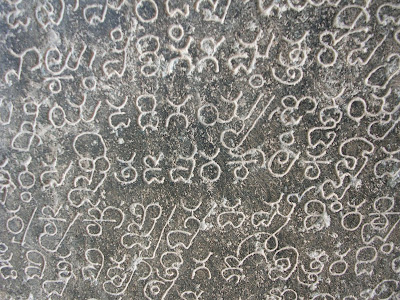 Check out the canopy, looks as though it's carved out of wood. 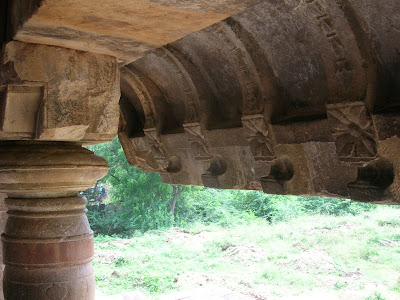 I wish people of Sudi, especially the youth, take an initiative to preserve their monuments which have given an identity to their village.

Wonderful . Heard about the place but never it was this wonderful . ASI will never take any action , nor reply also . Even we had mailed to ASI but till date no reply .Anyways . thanks for sharing about this place .

Thanks for sharing this, especially the visuals. I really wish to help a place like this in whatever way I can. You already did so, by sharing it! There seems to be an interesitng place in the same region, have you or would you plan to visit it sometime - 15°53'15.08"N 75°42'19.63"E ?

@architect1; coordinates you mentioned links to Banshankari Temple. I've visited it few times. Definitely it's an interesting place. The 5-level Deepastamba is a marvelous creation.

Very good post.
Hi, instead of waiting for ASI to take action.Karnatak govt should contribute much to save our culture.
I have vistited much of temple near by Hosdurga which also have ancinet sculpture.
Its too late for educated person like us to come together and improve the ancient lived culture.