About 4kms before Pattadkal, near Bachangudda I saw a farmer attending to his cattle and stopped to ask directions for Bachangudda's Stone Age megalithic tomb. I showed the picture of the monument in the booklet to Malkajigouda Channagoudar, the farmer I was speaking to. Drive for about 1.5kms and you'll see it on the right-hand side. Sensing my interest in ancient monuments he suggested me to visit Hulgyemmanakolla (near B N Jalihal village) about 4 kms from where we stood. He gave me the directions. I was asking if he could join me and one of his acquaintances walking towards us happened to be a resident of B N Jalihal. Malkajigoudar called him by his name- Ganganagouda and asked him if he could take me to Hulgyemmanakolla. Yes :)

While driving through B N Jalihal, we pass by Ganganagoudar's house. B N Jalihal is mentioned in a booklet on Pattadakal published by ASI. Stone tools belonging to Stone Age were found in this village. Our destination is another 1.5km. The terrain changes here, we are driving past a rocky hill, a dry stream bed and enter a valley. Apart from us there were few other visitors. A newly wedded couple had come here to offer prayers. Ganganagoudar waiting while I this shot. 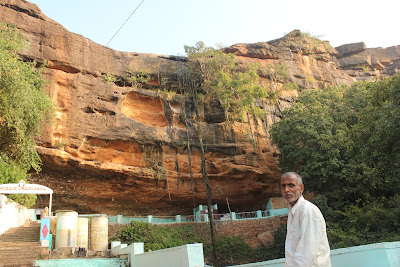 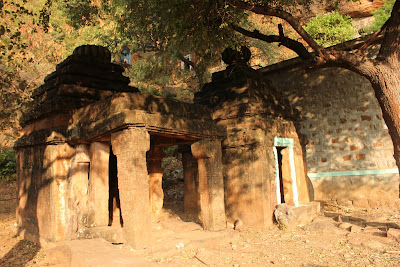 These small structures' overall height could be 8 feet. 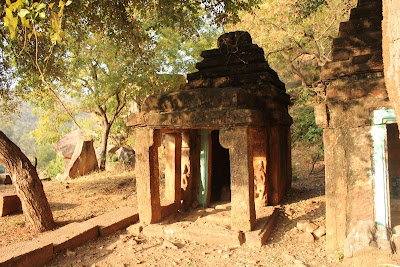 Hulgyemmanakolla is also mentioned in the ASI booklet but not by the name. It is described as a large hill valley having wide open rock-shelters. In the valley and the rock-shelter are six shrines. In the shrines are sculptures of deities such as Bhutamata, four armed Nagaraja, Lajjagauri and Shiva-linga. An inscription engraved on the front wall indicates that the shrine is the receptacle of Vikramaditya II caused to be built by Benamma. The temple site therefore is the royal cemetery, the only one of its kind so far known in ancient Karnataka. Interesting.

Behind this green wall are Mahalaxmi temple, a kitchen and living quarters. Ganganagoudar called the senior most care-taker and introduced us. 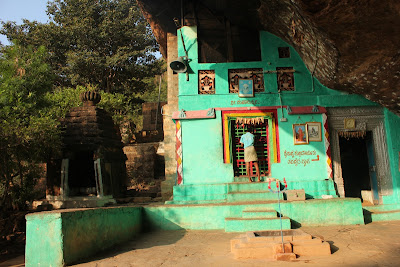 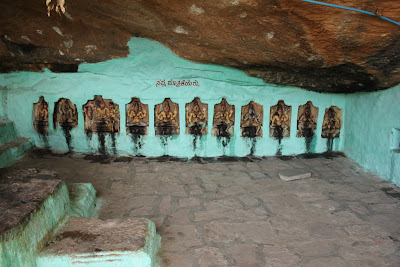 Perhaps this is the four-armed Nagaraja and Lajjagauri. 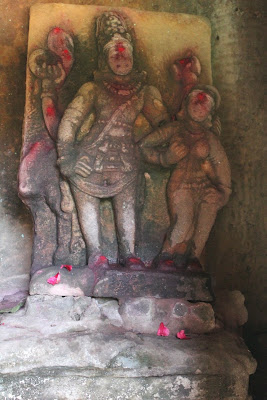 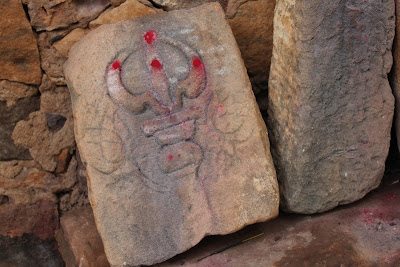 Another shrine. Notice the steps carved out of the rocks? 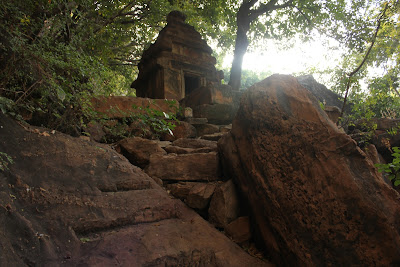 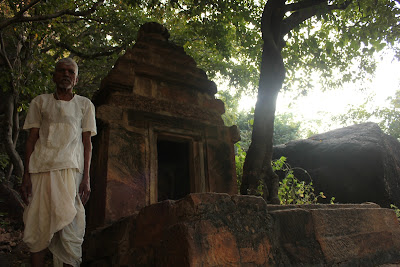 As seen from the other side. 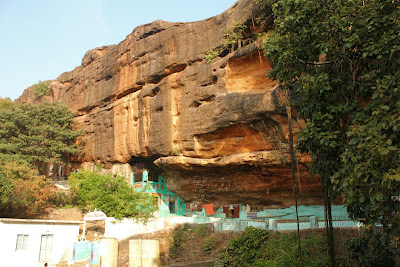 A short video of Huligyemmanakolla.


Near the kitchen, there is a flight of steps leading up to a Gadgi tomb of an ascetic who lived here for many years. 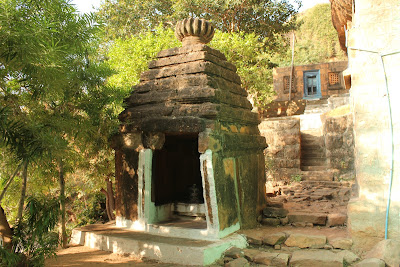 Statue of the ascetic. The ascetic in saffron is a regular visitor here. 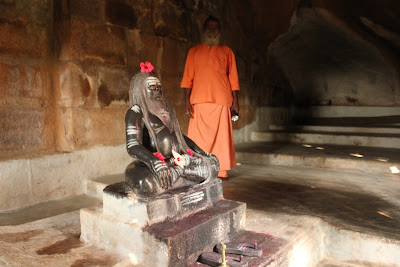 Mahalaxmi temple and kitchen entrance. These walls are recent constructions, about 50 years old. 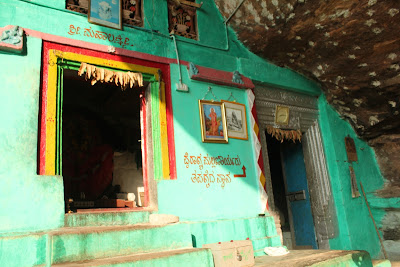 The kitchen. Preparations for making upit was in progress. 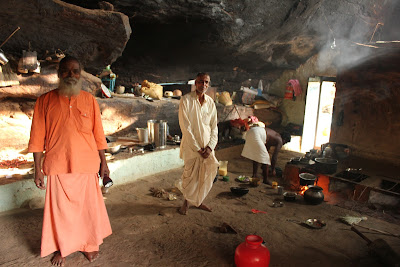 Left to right: Chief care-taker, cook, trainee poojari and Ganganagoudar. Besides religious duties the trainee has a number of other duties like fetch water, help the cook, etc. To the right corner is a small dark leading into an inner chamber- dark, long and narrow chamber, we had to use flashlights to see the inside. This inner chamber was used as living quarters few hundred years ago. Now its a store room. 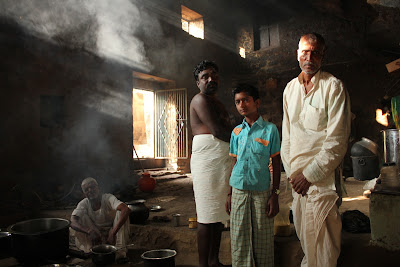 A rootfall. This valley is a home for monkeys. See the shelters above- these and many more such shelters are all there for monkeys to live in. 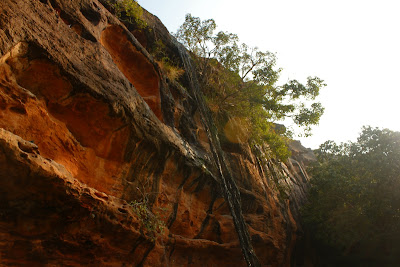 After a good rain, water from the hills falls here in a great shower. Color of these rocks below indicates the quantum of water splashed around. 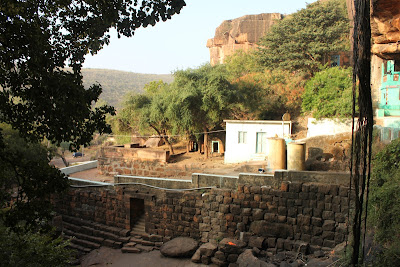 The chief offered us to have upit. I declined since I was concerned about Ganganagoudar's work at his sugarcane field, cane-cutting gang would while away time during his absence. On the way back we spoke of problems in farming. At the main road we exchanged contact numbers and said bye to my new friend. I wish to come back here after a good rainy season. I'm sure the place will look different. I drive towards Pattadakal in search of megalithic tomb of Bachangudda. 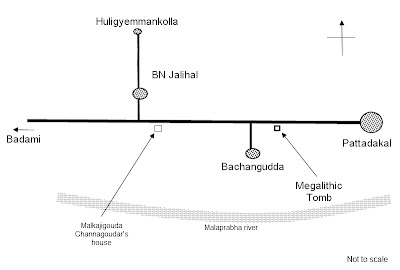 Nice pictures, especially 2 and 3 with the kind of light. I visited Pattadakal, but did not explore things around it. Thanks for sharing with such nice pics and information, would add this to my wishlist of Badami trip, that I will make again someday.

There are few more hidden places in Badami-Pattadakal-Aihole area. For instance, between Pattadakal-Aihole, you can see a temple on a rocky hill across river Malaprabha. That's on my list for long time now. During my Dec 2011 visit, I heard there's Halae Mahakuta. Hosa Mahakuta is the one tourists visit. Folks at Aihole were speaking about an ancient temple across the river. With every visit, I come back with new discovery :)

I thought the pic Nagaraja & Lajjagowri as of Shiva & Parvati since there is Nandi behind them.

Hey Guys Great blog,photos and information. Keep it up