Prehistoric Petroglyphs of Kappagallu - part I

Having seen prehistoric rock-paintings, megalithic tombs and musical rocks, I was yearning to see petroglyphs ~ line drawings made by etching rocks. Research showed that the Neolithic site of Kappagallu near Bellary is one place where petroglyphs could be found, on the hill called Hiregudda meaning big hill. The site was discovered by a British officer William Fraser in 1860s. Few years later the site was visited by a British geologist and archaeologist - Bruce Foote -who studied the site extensively and the findings were documented in his report 'Geology of Bellary district 1885.'

Online documents seen were atleast two decades old and the present day satellite view of Hiregudda clearly showed quarrying activity on the hill. I was worried.. how could quarrying be allowed in such an important site? Nevertheless, I was prepared to visit the site. While researching I happened to come across an article on prehistoric site and I got in touch with the author - Rama Dasa of Sanganakallu village. I was happy to have found Rama Dasa, we spoke over few times and fixed a date for a visit to the site.

March 7, 2013
We arrived at Sanganakallu around 7-30 AM, met Rama Dasa, his friend Veerebhadrappa would be joining us. We drove out of the village, drove on the highway for a short distance and turned left towards the neolithic complex. The entire hill was slated for development as a tourist site; at the base of this hill here is a half constructed building which was supposed to house a museum and information center. Part of the hill was to be fenced - note the pillars sans fencing wire. The entire project has come to a standstill because of bureaucracy. Sadly our historical sites end up neglected - thanks to ignorance and indifferent attitudes by public and government. Anyway.. we are at the eastern base of the complex, this hill ahead of us is known as peacock hill. 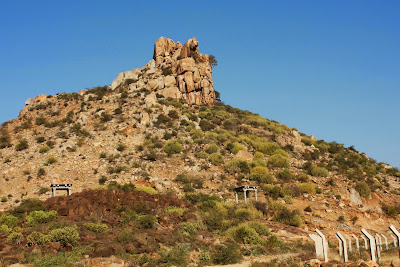 The prominent rock on the left looks like a peacock's head, hence the name. Here's the team all set to explore the ancient rock art of our neolithic ancestors.

We took the dirt road created by quarry operators. The excavation activity to build a road has exposed layers of different types of soil types belonging to different periods of this hill. The lowest level seen here is rock topped by red soil, a whitish layer and a layer of black soil. 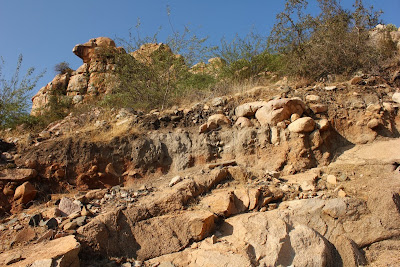 Rama Dasa told us that rain water would erode soil and expose artifacts like bones, stone implements and waste chips. In fact we were shown several broken stone axes, pounding stones and sling shots. We found only damaged axes, spearheads and pounding stones. 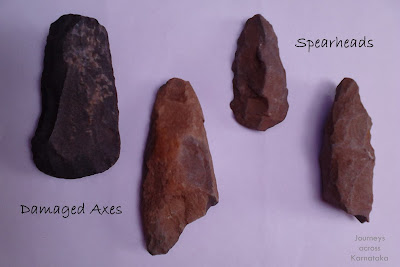 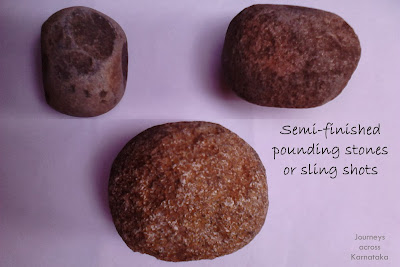 Rama Dasa explained that at the hill top is a neolithic factory of stone implements, men produced stone implements by hand and ground them to perfection. Water was important in the process of finishing because it worked as lubricant, coolant and medium to wash away burr. Rain water was plenty back then and the entire hill had streams running down almost through the year. According to Rama Dasa, thousand of years ago, this entire hill and the surrounding plains was a very busy place.

The dark-brown rocks on the hill ahead are igneous rocks. These entire heap of rock is known as Dolerite Dyke. Our plan is to climb these rocks and see some ancient petroglyphs. The shelter you see at the bottom left of this picture is a modern structure, part of the shelved tourism project. 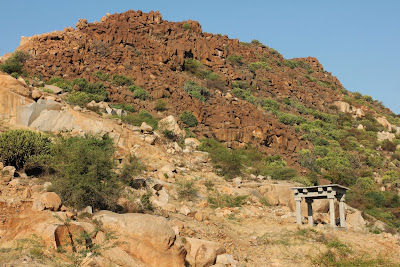 We leave the dirt track and make our way to the dyke. This is the first petroglyph we see- a ritual bull and a bell ~ Gooli mattu Gante in Kannada. Note the line across the hump - that is a rope tied around the hump. In Hindu tradition bull is worshiped because of two reasons; it is Lord Shiva's mount and it is farmers' power. A bull with a large hump is called Gooli and they are not employed in fields but are decorated colorfully and used in rituals. 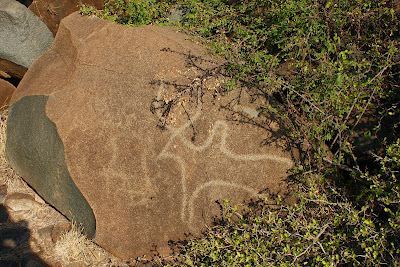 Rama Dasa would take us up this heap of boulders! He told us that we would find hundreds of drawings of animals - both domestic and wild, human beings - individuals and in groups, and symbols. 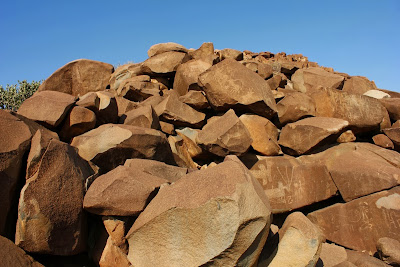 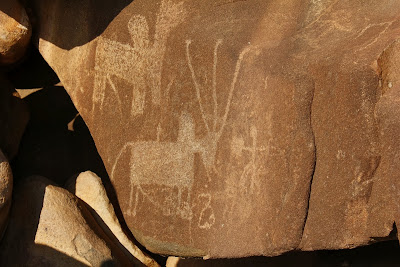 Few minutes climb we come across a uniquely shaped rock - the sight of the rock itself states something special about it. This rock is called Gante Kallu ~ bell rock. This rock, when struck sounds like a bell. 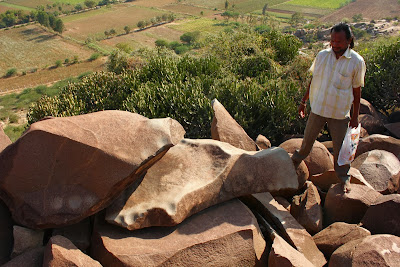 Many rocks had flat faces, convenient for drawing. Rama Dasa identified an elephant and a horse in this prehistoric collage.The elephant is close to his left foot and the horse is hidden behind his right leg. 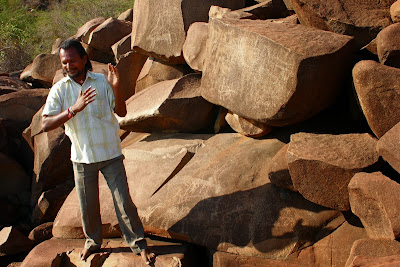 Here we have three images on three rocks. On the left is an aroused man. In the middle is a very well built bull. And at the bottom is a line diagram of a man driving a bull. 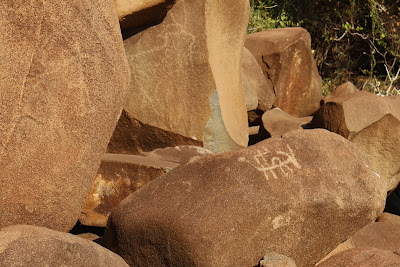 By 9-10 we reach a part of the hill which is relatively flat. Rama Dasa calls it a meeting place. The level surface could easily accommodate 25 adults. The flat-top boulder next to Malatesh is the leaders' seat. Rama Dasa becomes the presenter and rest of us become the audience. He says this place was used to resolve fights between members of the community with the judges on the high seat. Notice the small stone below the seat - that has been placed there to position the seat. Rama Dasa mentions that people back then used advanced techniques to position or secure boulders to prevent them from slipping or rolling away. One of the techniques was concrete - unbelievable isn't it? I don't doubt his words because our ancestors were much more intelligent and capable than us. The meeting place has its share of art and the prominent image here is the crane ~ Kokkare. And to the right of the picture is a bull. 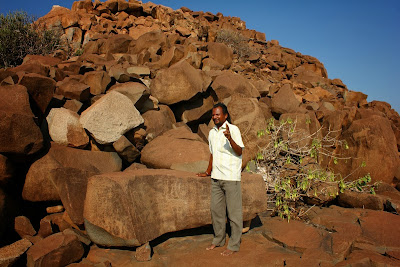 The Crane: long legs, slim body and a long neck; there's a fish in it's mouth; the circle behind the crane represents a large pond. Rama Dasa is pointing at the plains below where the pond once existed. 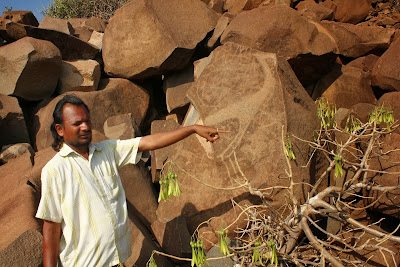 The plains of today; try to block out the fields and village and imagine a large pond out there with cranes milling around. 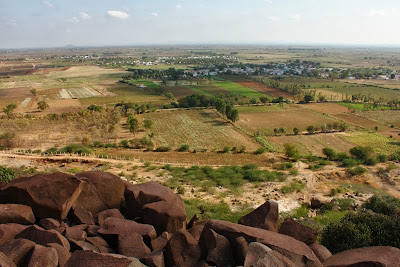 The next prominent image is the Bull with curved horns. Notice the ear seen at the base of the horn and the partially raised tail. One important point; Rama Dasa mentions is the significance of the direction animals/birds face in these images - they are pointing at something related or showing the way forward up this heap of rocks. 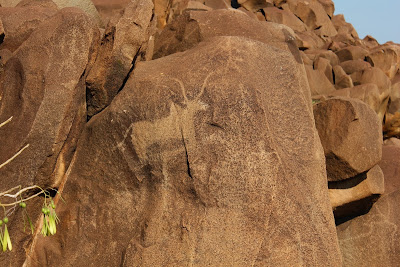 One of the audience rocks has 1" diameter shallow pits arranged in an intersecting arc and line; 16 pits and 13 pits respectively. This formation could be a calendar or some sort of game - I wonder what it represented. 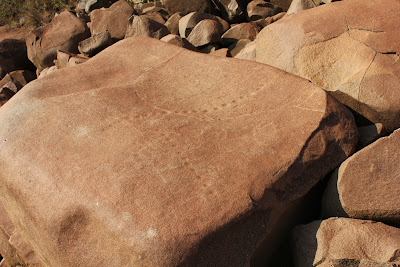 Next we come to a complex drawing with a even more complex meaning to it. Well, I'm not in a position to explain the meaning here. Perhaps, some day I'll sit with Rama Dasa to record what he says and share the transcription. Now the image - what seems like a geometric design is a circular array of five bulls and five axes. On the perimeter are the bulls and the elongated legs converge to form the shape of an axe. 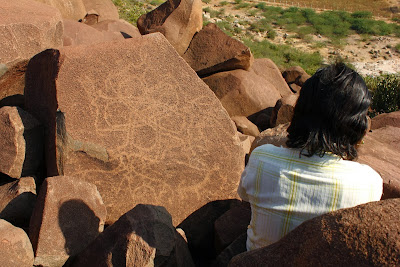 A pair of bull and axe separated from the not so simple diagram. Going back to the photo above, notice the paired lines forming the legs - the hind legs of one bull becomes a fore legs of the bull on the opposite side - its an endless intertwined loop. 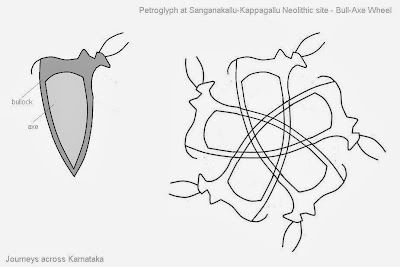 Rama Dasa talked about the wheel for 45 minutes connecting it to Earth's orbit around the Sun and the calendar. If we had not stopped him, he might have spoken another hour. In short the Bull-Axe has a very deep meaning.

A phone call had interrupted Rama Dasa's talk on Bull-Axe wheel. During the recess Veerabhadra made himself comfortable on a chair :) 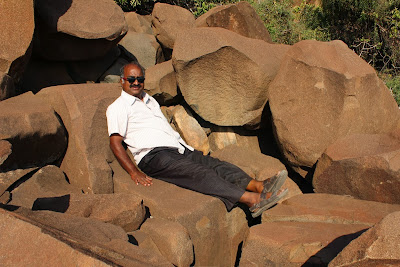 Climbing up was getting tougher, our guide was looking for an easy way. However, we had to do little circus, squeeze between rocks and lend hands to each other. Sun was blazing down but the wind kept us cool. 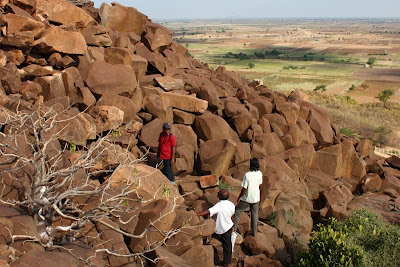 We reach another significant stage of the dyke. Here several large images could be seen... a large bull with three dancing human figures. 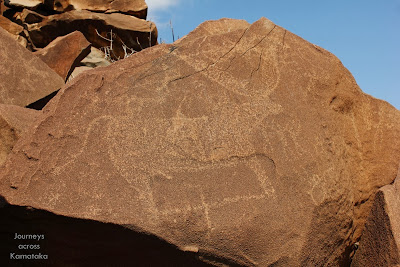 Two crowded boards; a row of similar looking animals could be dogs.. I'm not sure if our host mentioned a dog. The figure with an elongated snout could be an elephant. A west facing bull mounted on a stick. 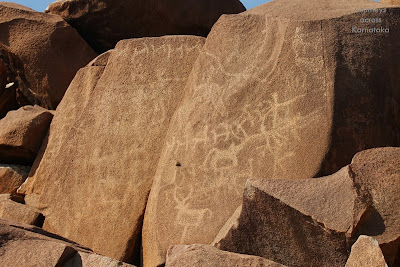 More to come.. this article will continue as Prehistoric Petroglyphs of Kappagallu - part II.
.........

Great, in fact it come right in time. I am travelling in this route. Kindly share contacts of Mr.Rama or Mr.Veerbhadra. You can inbox it to me on mysoresam@gmail.com. Thanks a bunch for the write up.

Great Sid, Really lot to know from them and through you. Very well and simple narration.