Malkhed originally called Manyakheta was the capital of Rashtrakuta empire from 814 CE to 968 CE. This place rose to prominence when King Amoghavarsha I (Nrupatunga Amoghavarsha) shifted Rashtrakuta capital from Mayurkhandi (present day Bidar) to Manyakheta. Amoghavarsha I is said to have ruled 64 years. He authored first classical work in Kannada- Kavirajamarga. Amoghavarsha I with the help of scholars and intellectuals like Mahaveeracharya, Jinasenacharya, Ajitasenacharya and Gunabhadracharya helped spread Jainism in this region. Around 1050 CE Manyakheta was taken over by Kalyana Chalukyas, it remained their capital before moving to Kalyana. Malkhed is also known for the Brindavan of Madhva seer Jayatirtha at Uttaradi Matha. Jayatirtha was one of four disciples of Madhvacharya.

November 28, 2013
The day started with a drive from Gulbarga to Malkhed, traveling on the good road was a breeze. Malkhed is about 40 kms east of Gulbarga, the town and fort are situated on left bank of Kagini river, a tributary of river Bhima. To reach the fort we had to negotiate terribly narrow streets of Malkhed village. A pair of bastions man the fort's main entrance. 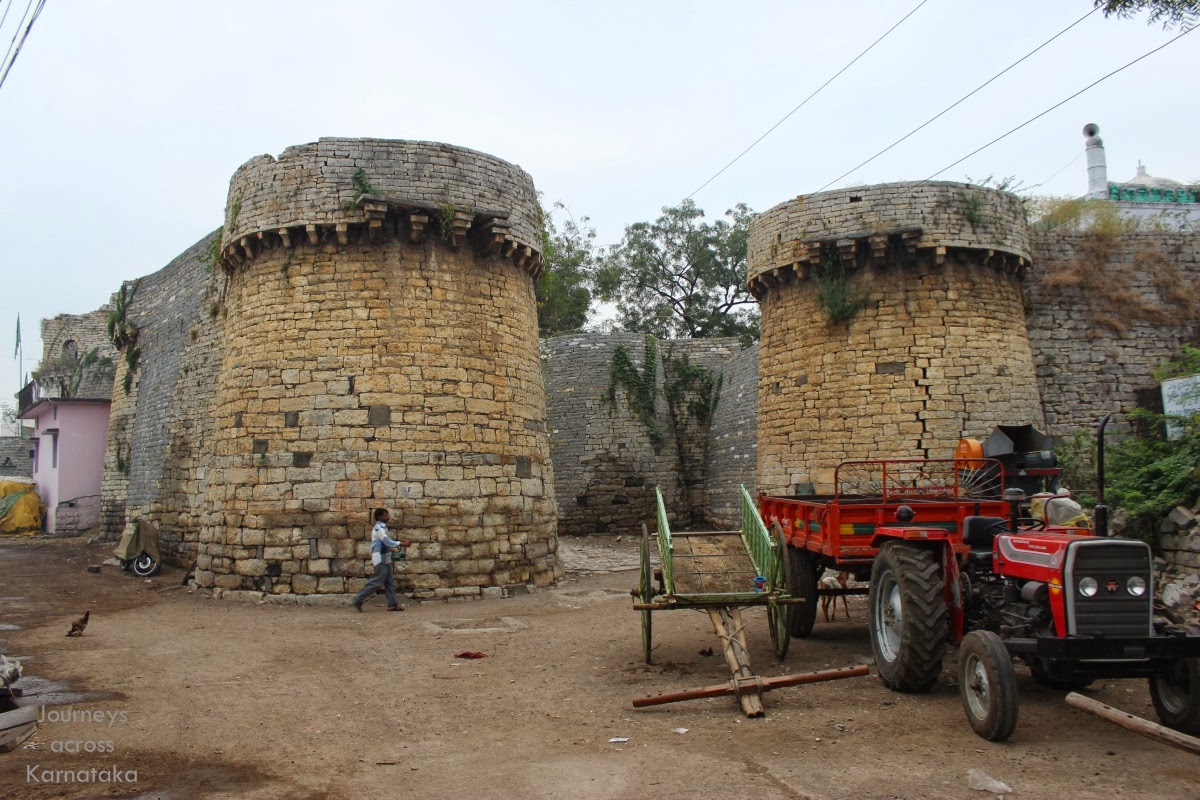 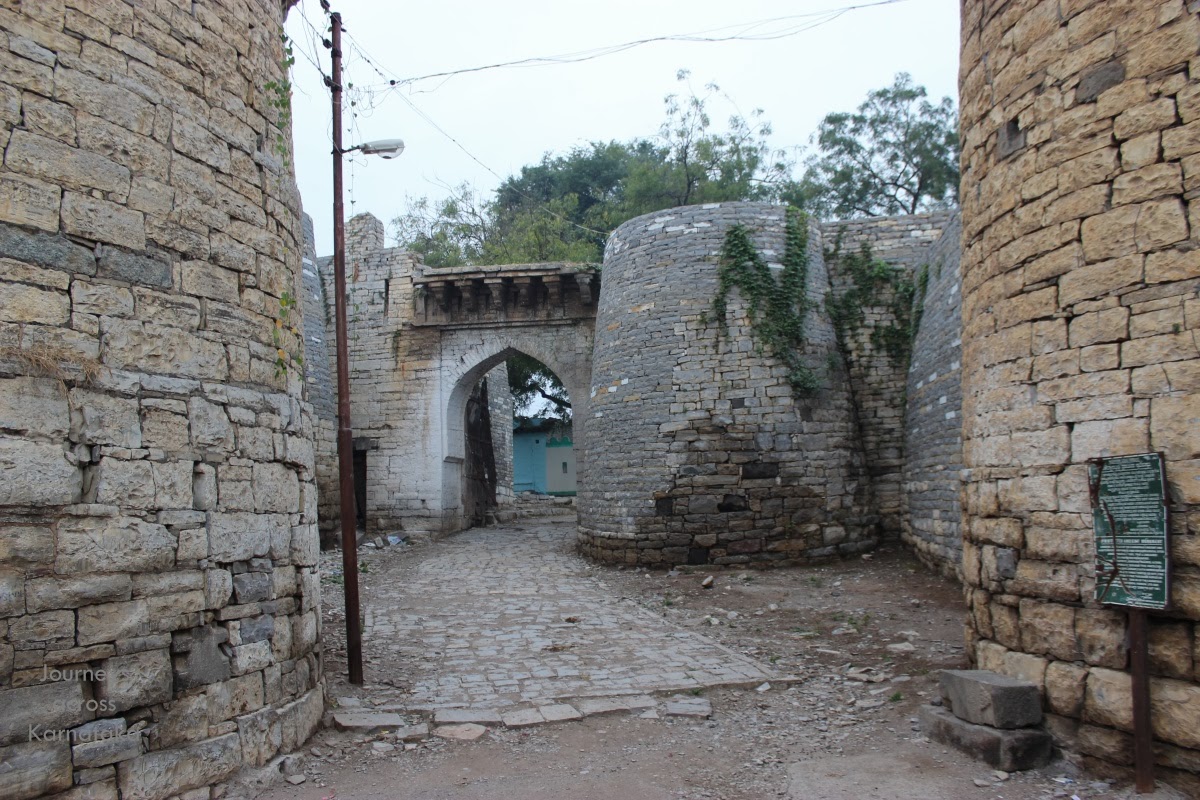 The walls and bastions are a good 20' high. The man walking into the fort, a young Muslim chap would become my guide few minutes later. 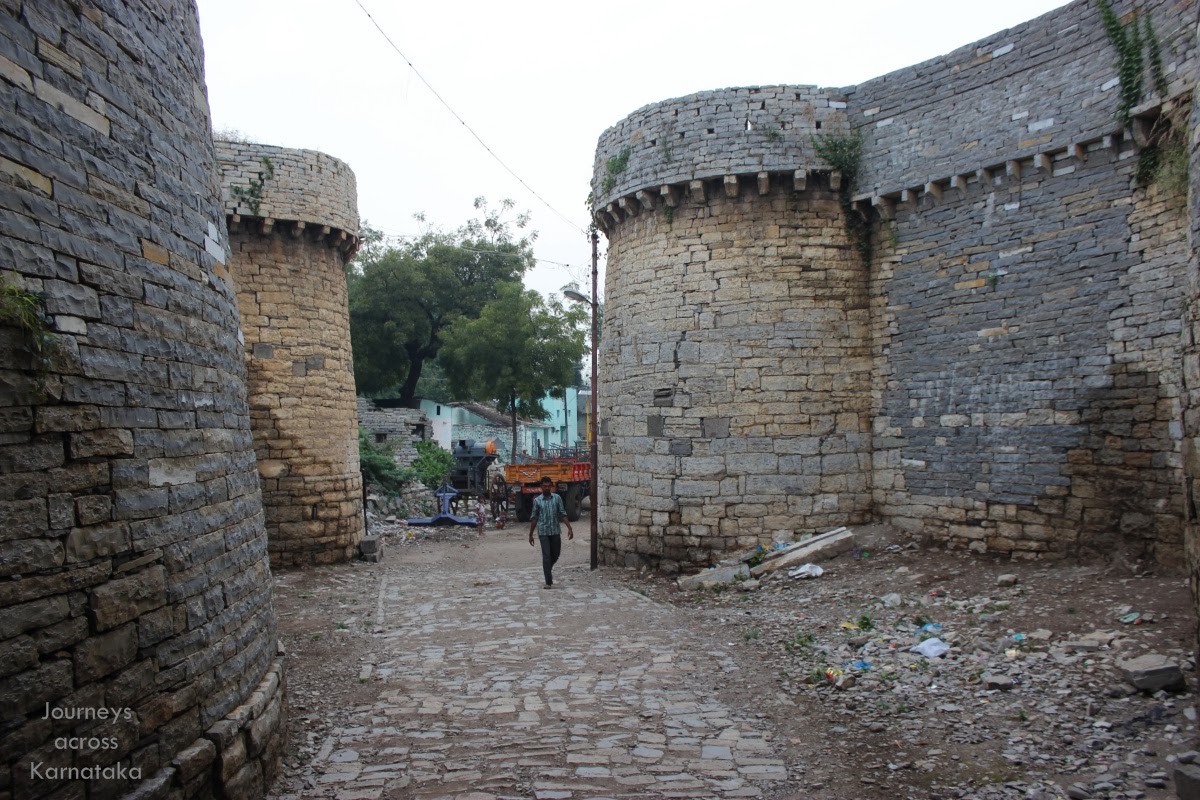 View of the main entrance from inside. A pari of ancient wooden doors still hung on by the hinges. 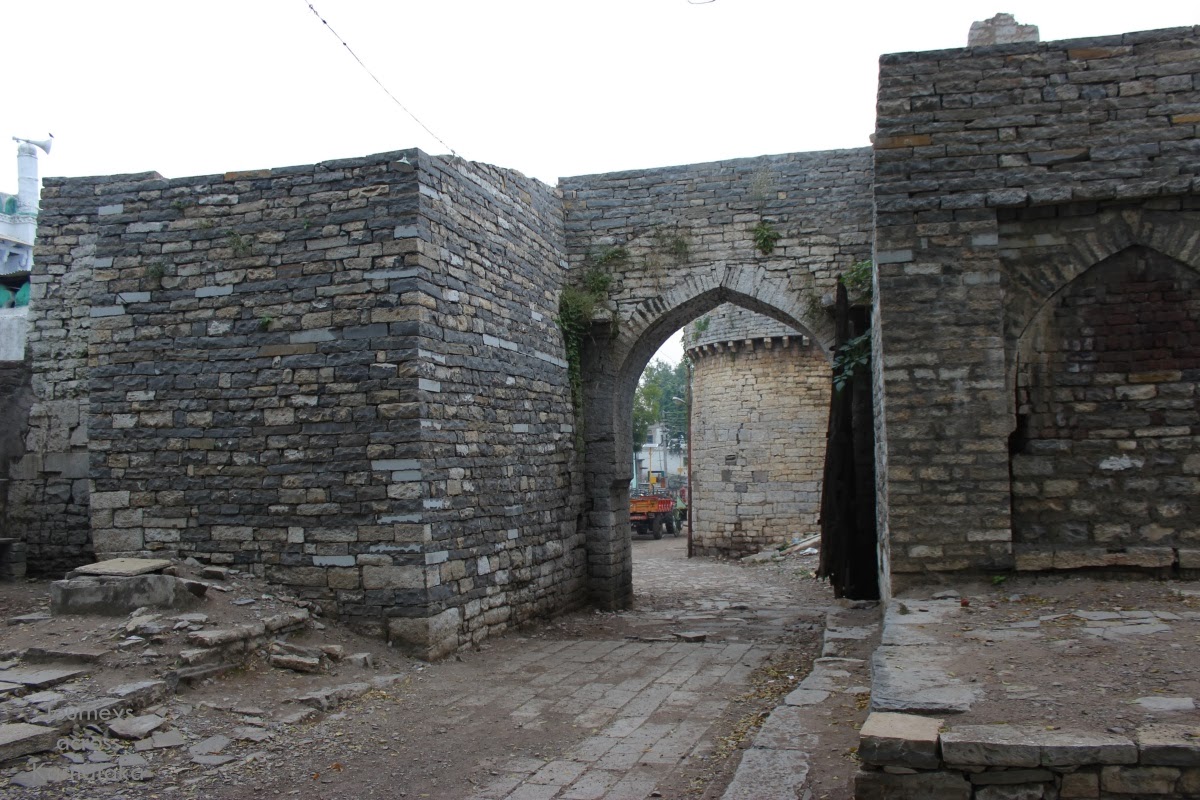 One of the main doors decaying rapidly (left). Like any other fort there's a smaller side entrance, the wooden door has somehow survived. Take a closer look at the side entrance- the black colored beam was originally a column in some Hindu temple. Seems like a Muslim king put material from a demolished temple to use here. Such sightings are quite common in forts of North Karnataka.. Mudgal, Manvi and Raichur are examples. 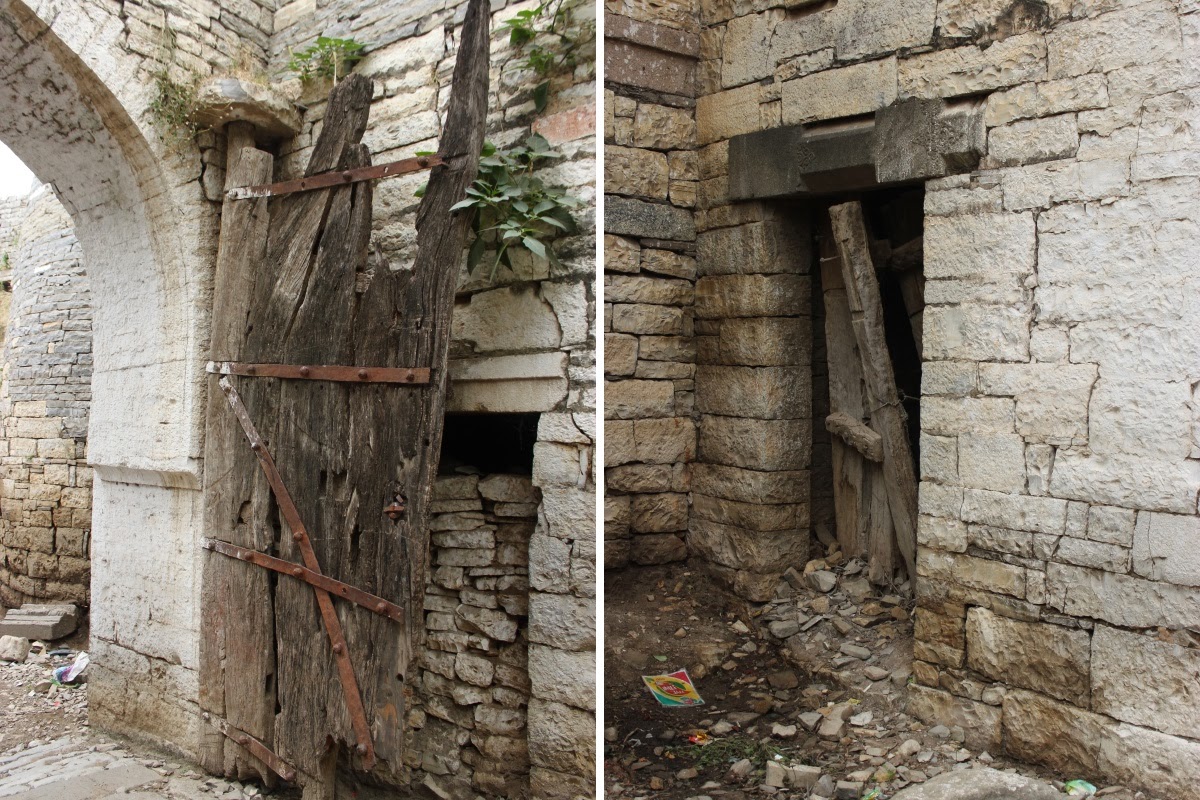 Dargah of some Muslim holy man. Opposite this Dargah is an arch, beyond which is the inner fort. 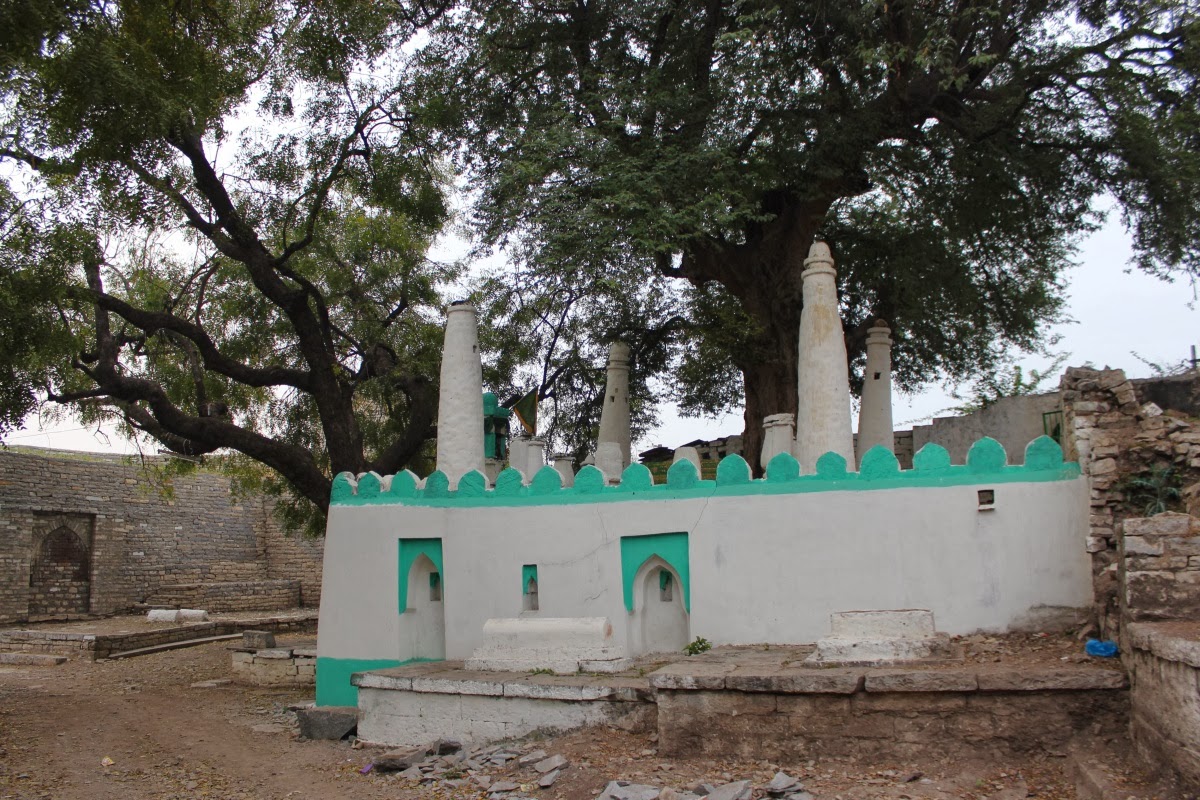 Walls and gateway arch in ruins. 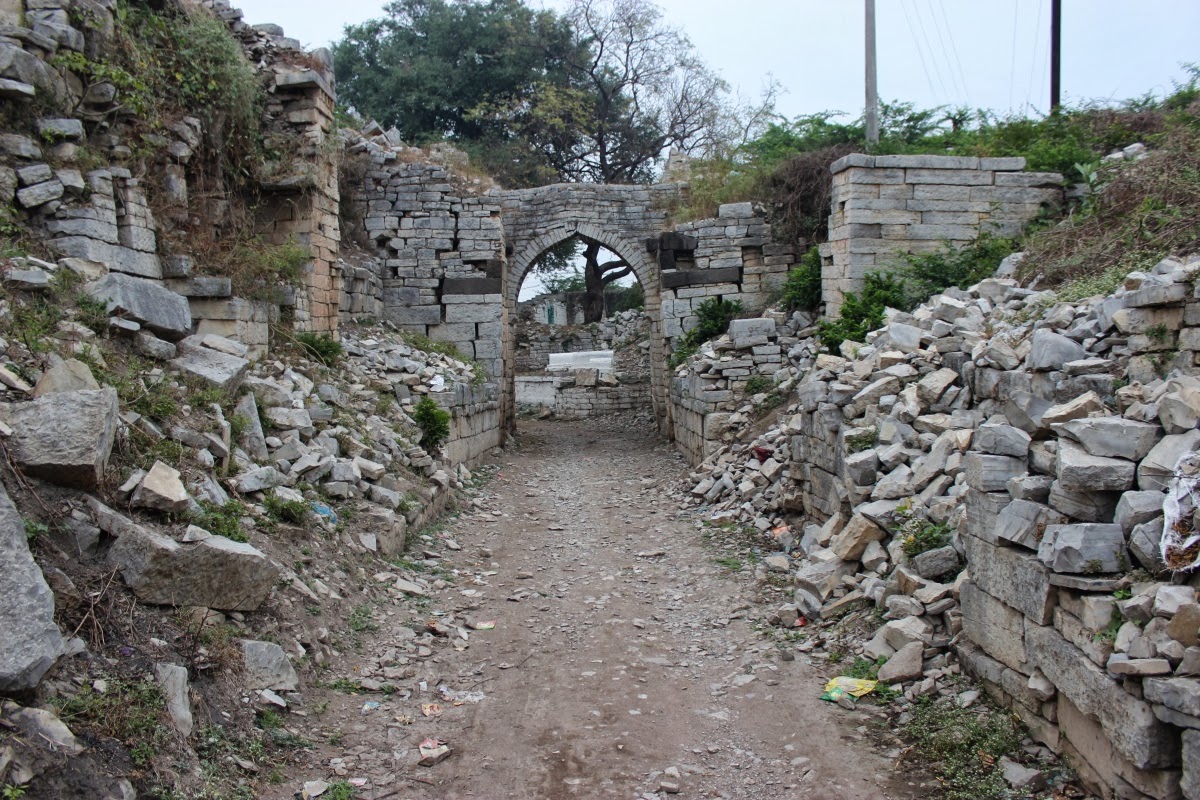 The narrow passage opens up after a distance. A high platform measuring approximately 100m x 30m   sits at the center of the fort. The eastern end of the platform is occupied by a 30' high circular watch tower. The watch tower has a narrow spiral stairway built into it. 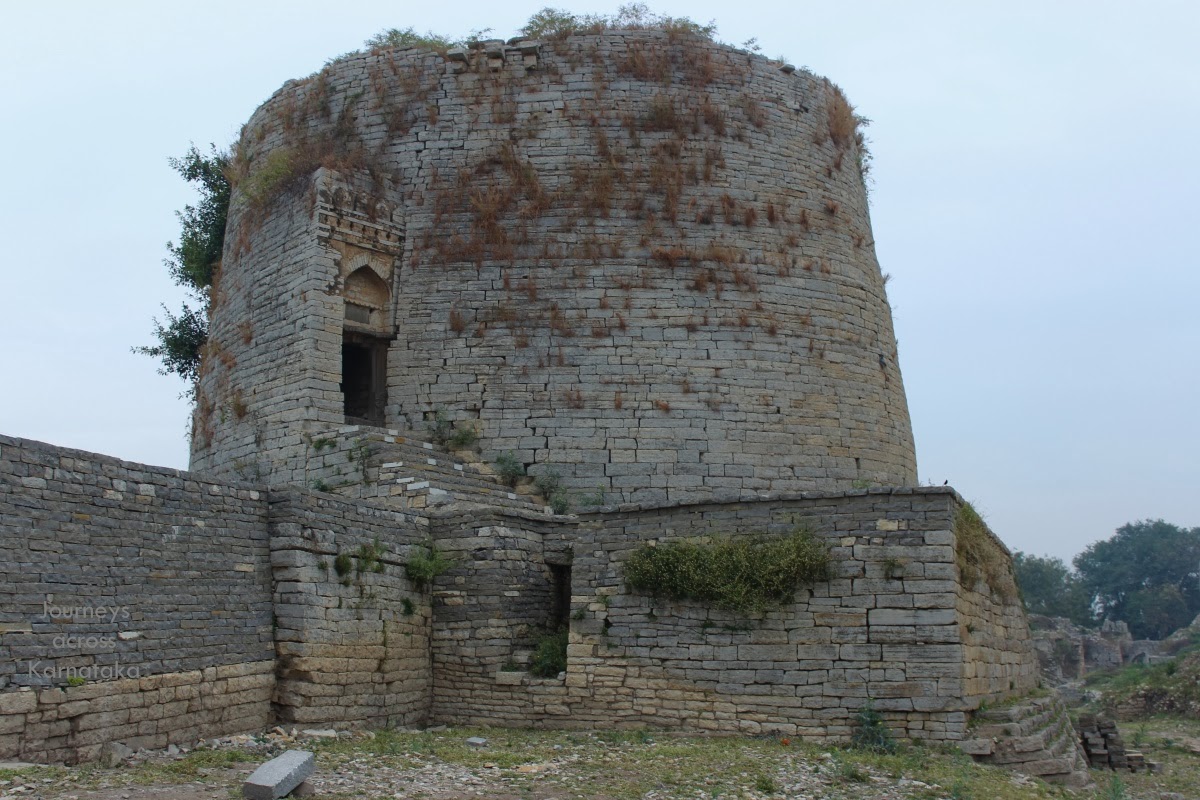 At the western end of the platform is a badly damaged mosque. Restoration work is being carried out. 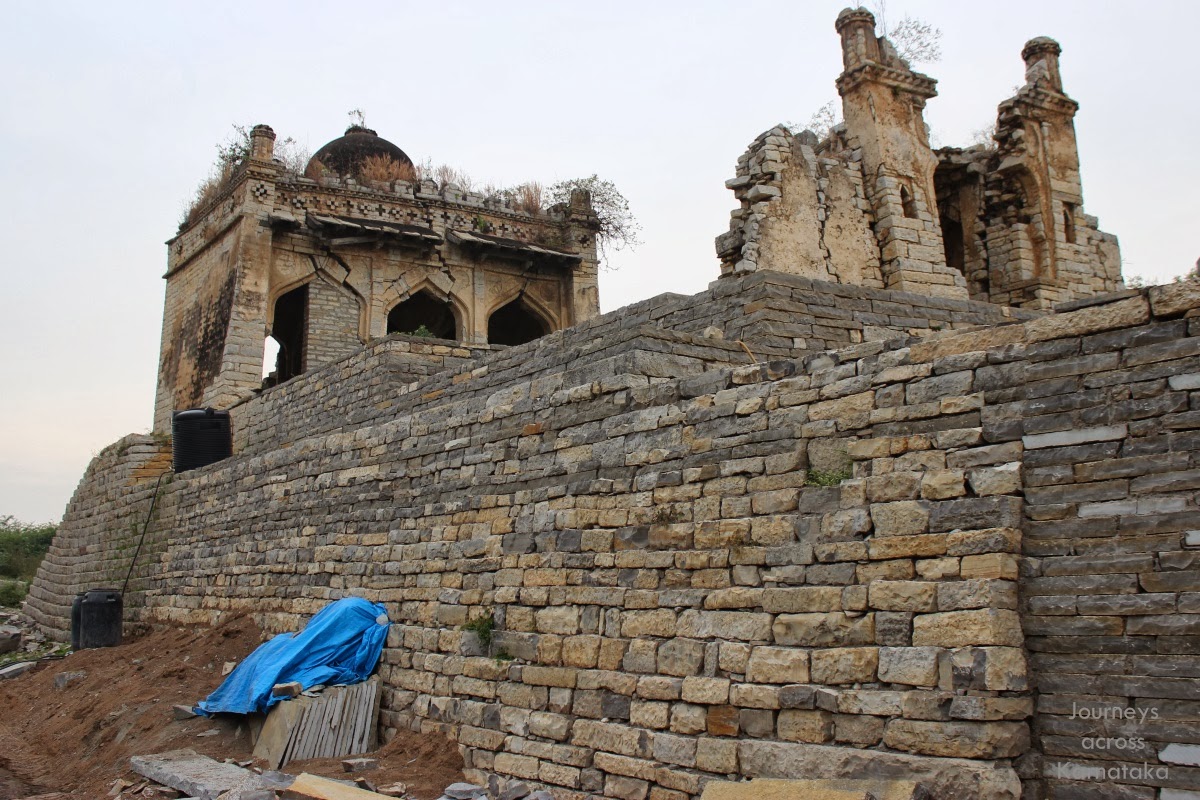 My guide said this mosque is known as Kaala Masjid ~ Black Mosque. 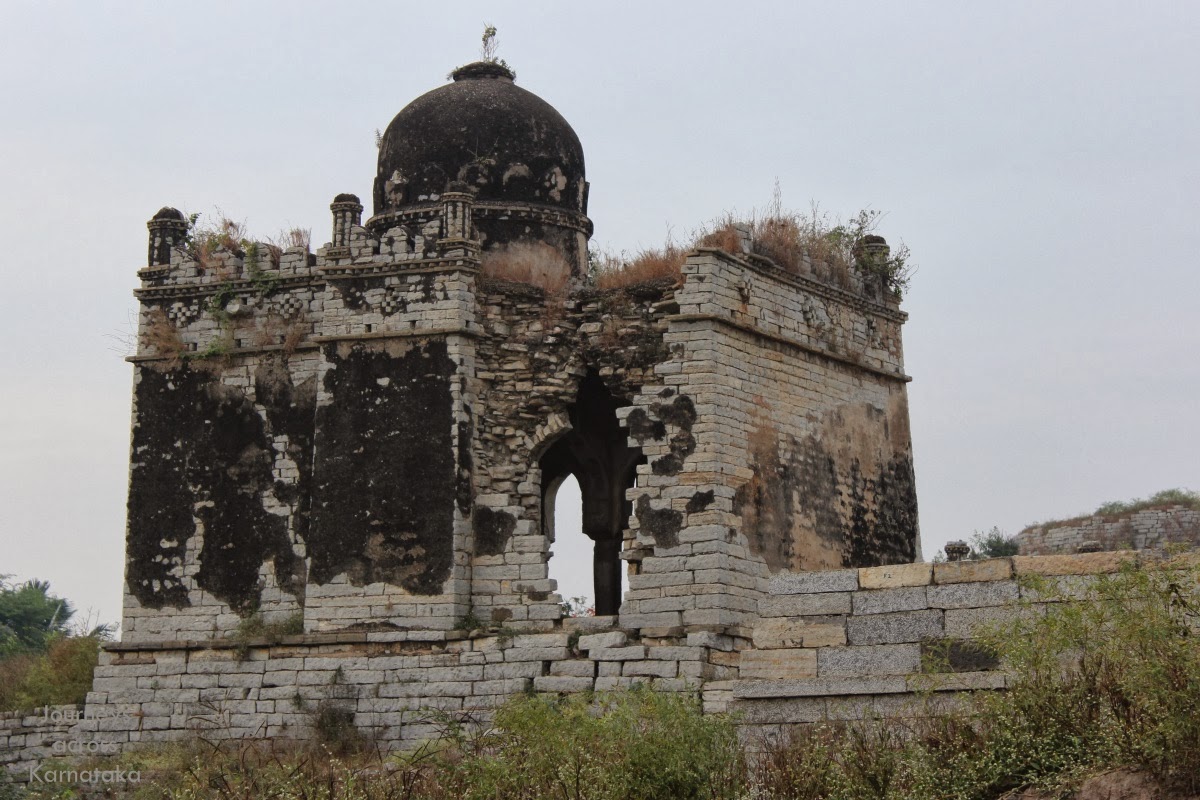 We climb on to the platform. That platform will give a good view of the fort. 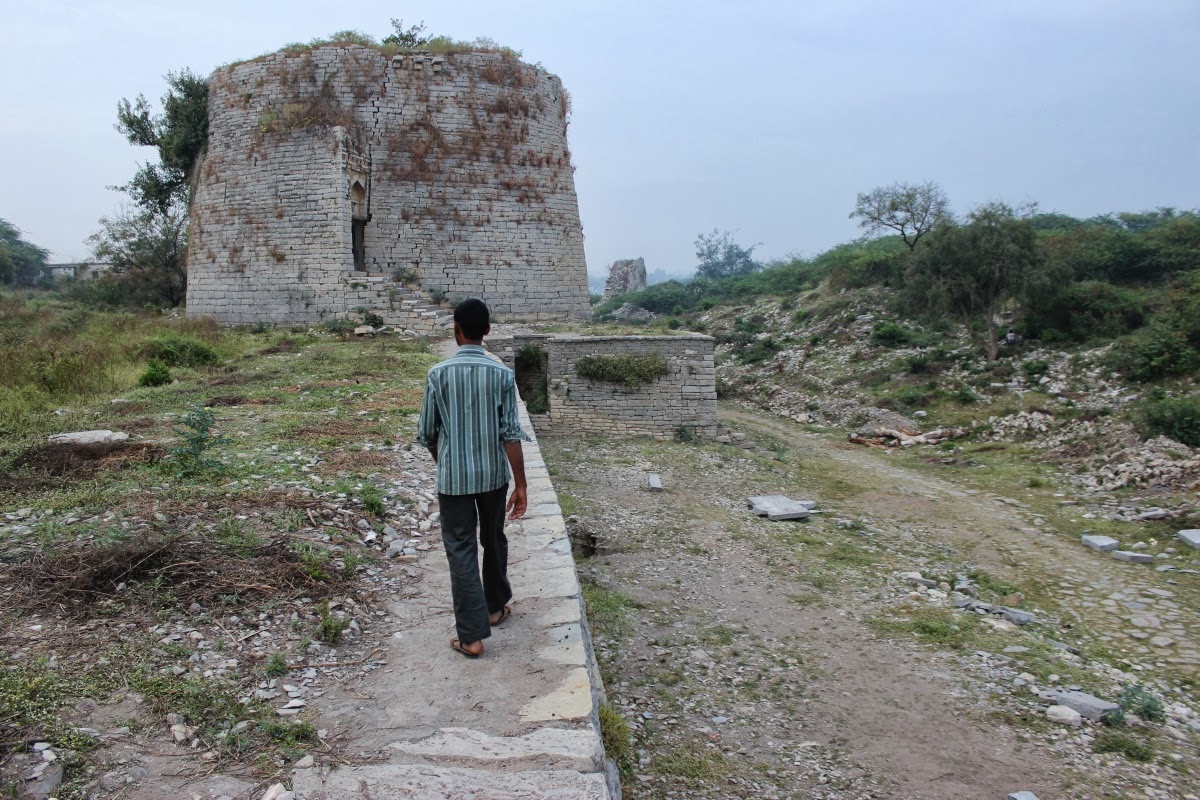 The narrow entrance to the stairway. On the lintel is a Jaina image and inside floral designs decorated beams of the door frame. 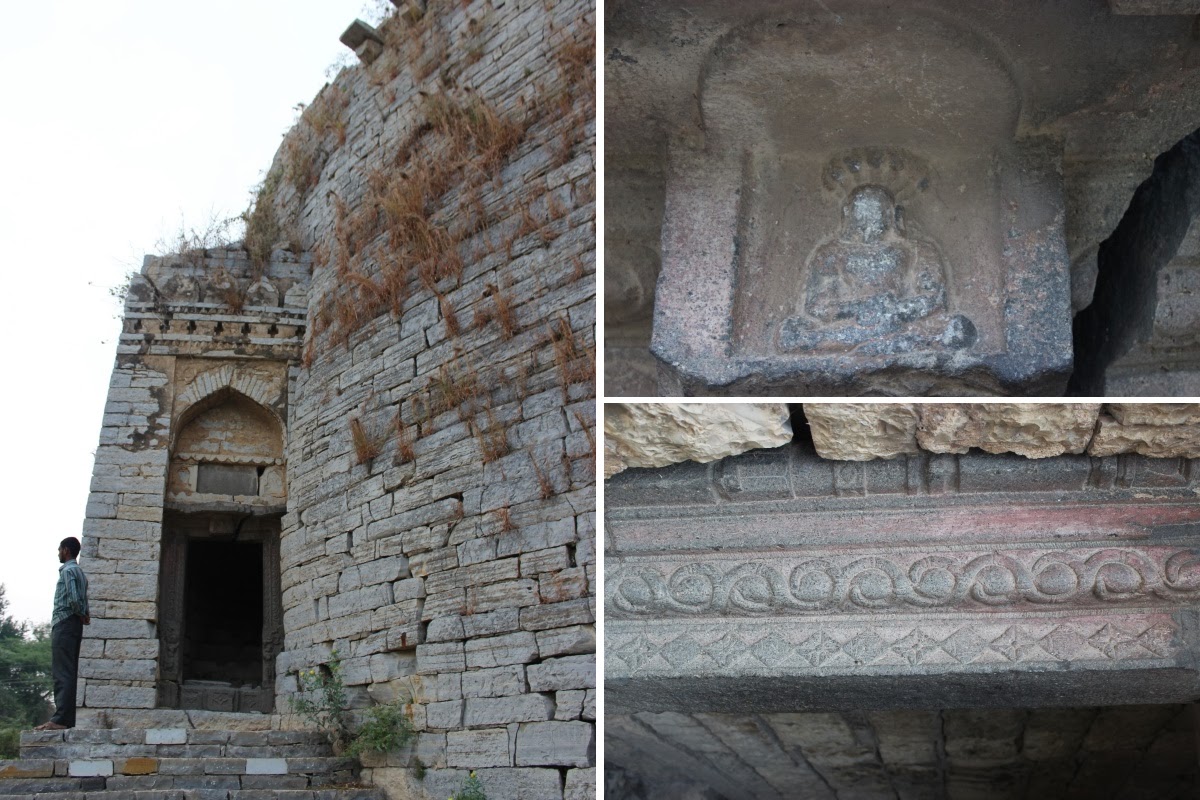 The narrow curved stairway is really tight, that way access to the tower is restricted. 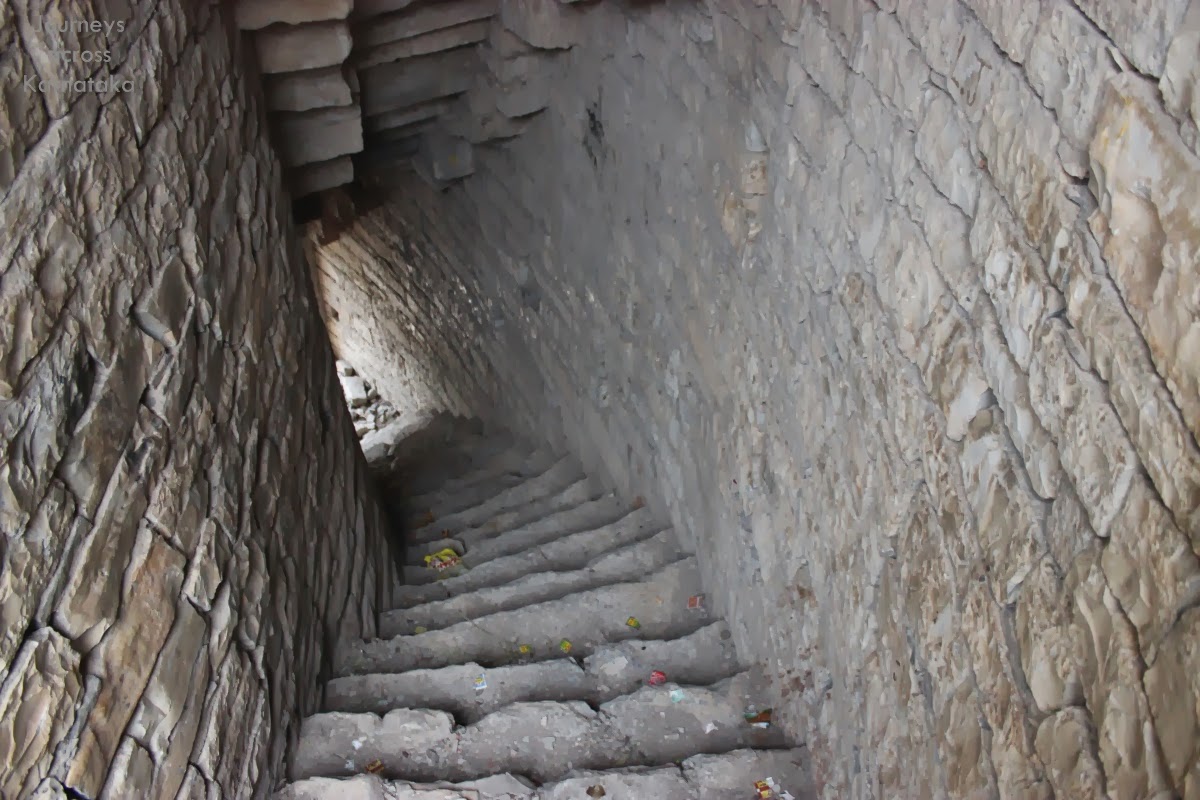 Views from the watch tower: this is the path to the main entrance. 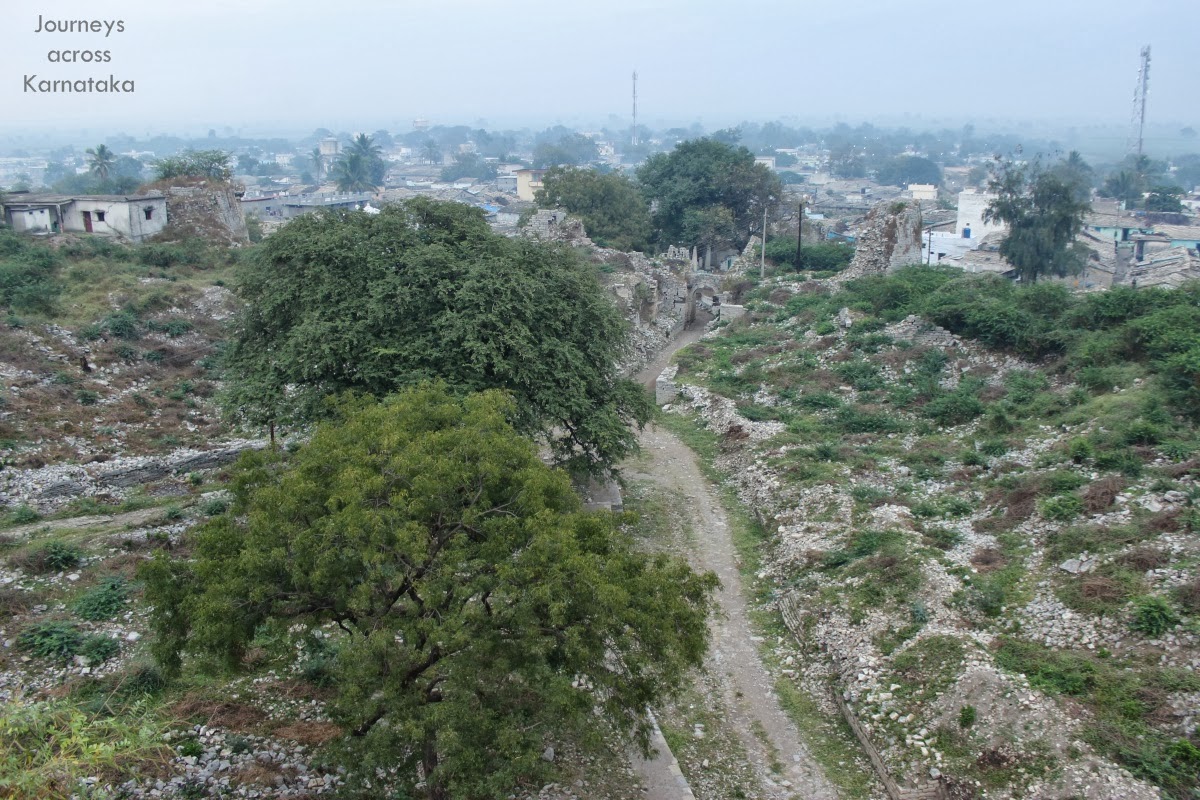 A watch tower on the southern wall. 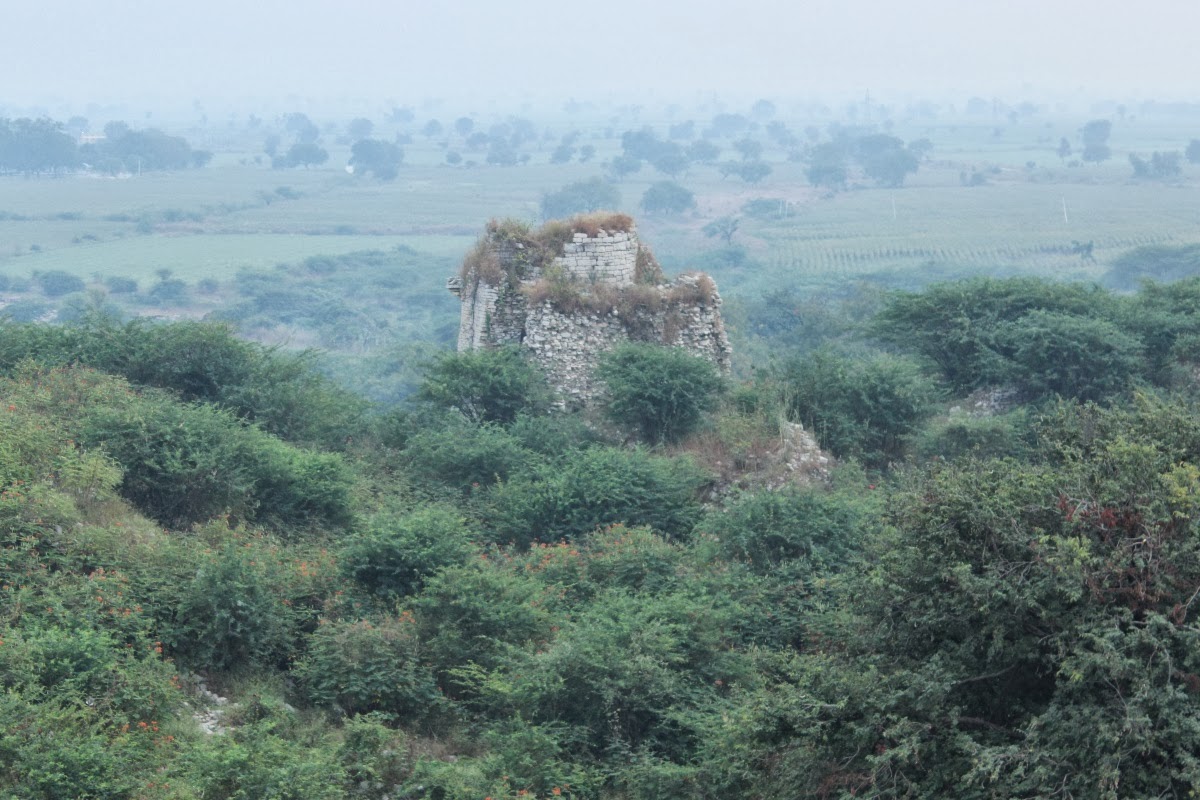 Kaala Masjid and Kagini river. The smaller structure is a temple which is being restored. My friend here works as a supervisor with the contractor carrying out restoration work. 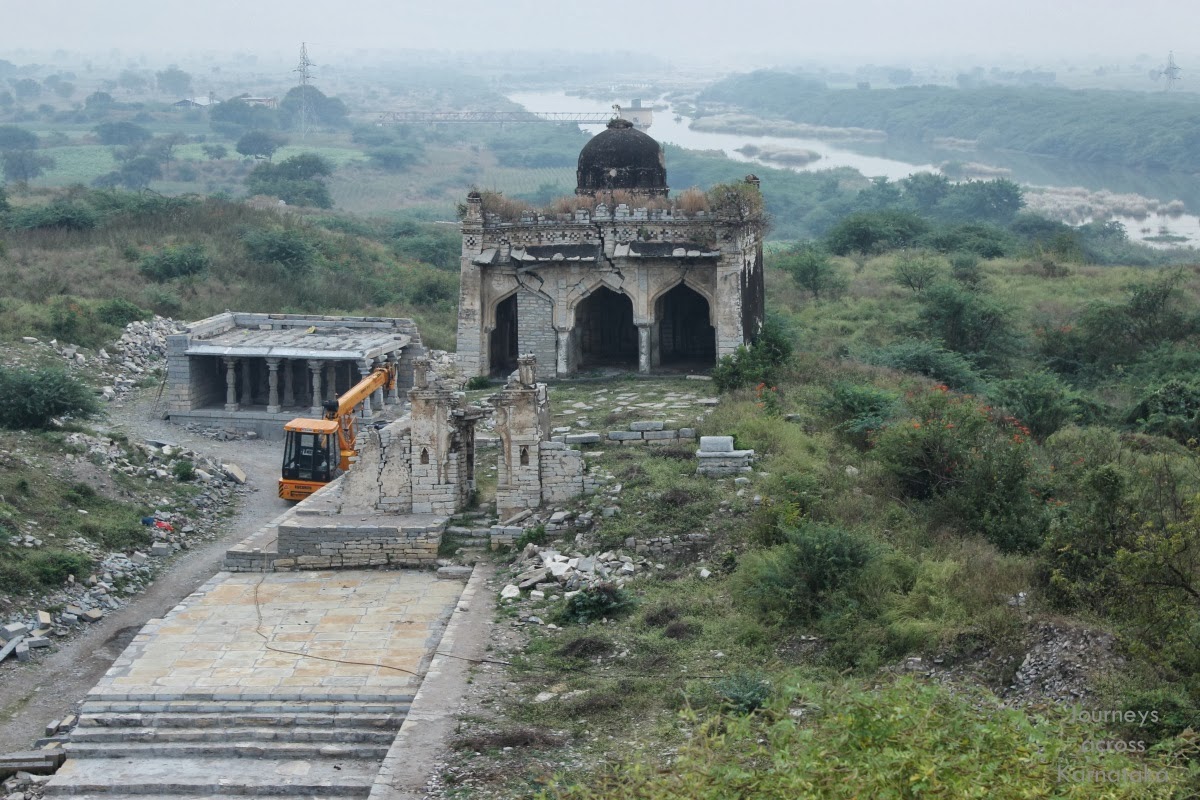 Beyond the mosque the path leads to the fort wall running parallel to the river. Close to the wall is another Hindu temple.. except for this heap of ancient sculptures there's nothing ancient about the temple.. an ancient shrine housed in a badly made cement structure. 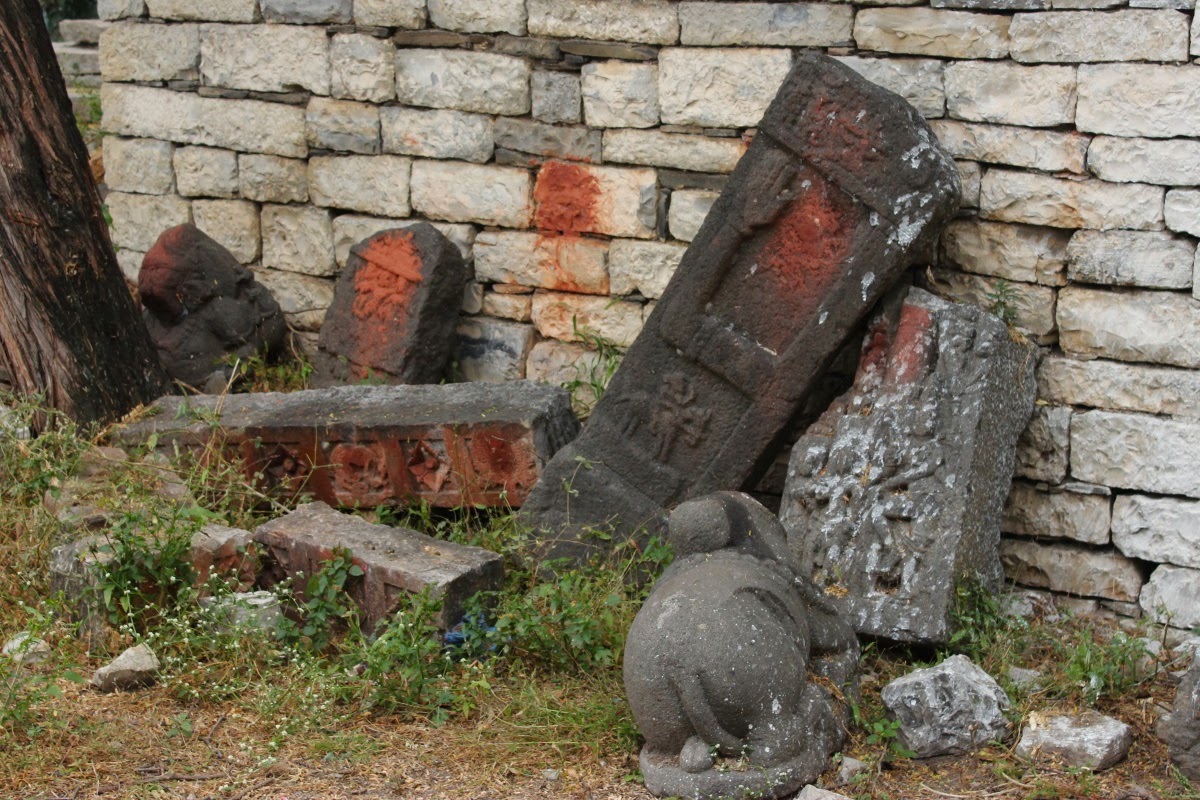 My guide showed me some ruins of ancient living quarters- probably this was a dwelling of some royal family. In fact people still lived in within the complex. Probably they have been living here for generations. 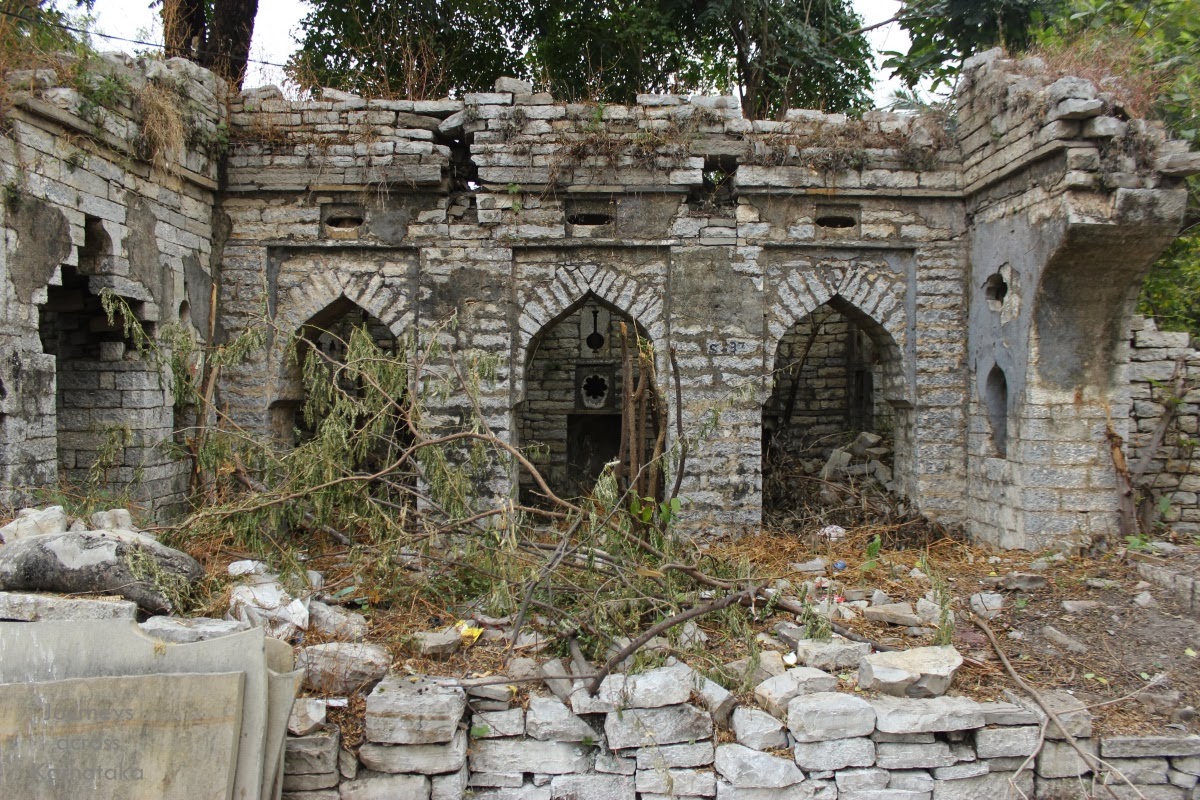 The complex even had a courtyard with a tree in the center. Sadly the courtyard was a trash dump. I noticed several cannons lying about in trash. My guide and I cleared some fallen branches before taking this picture. 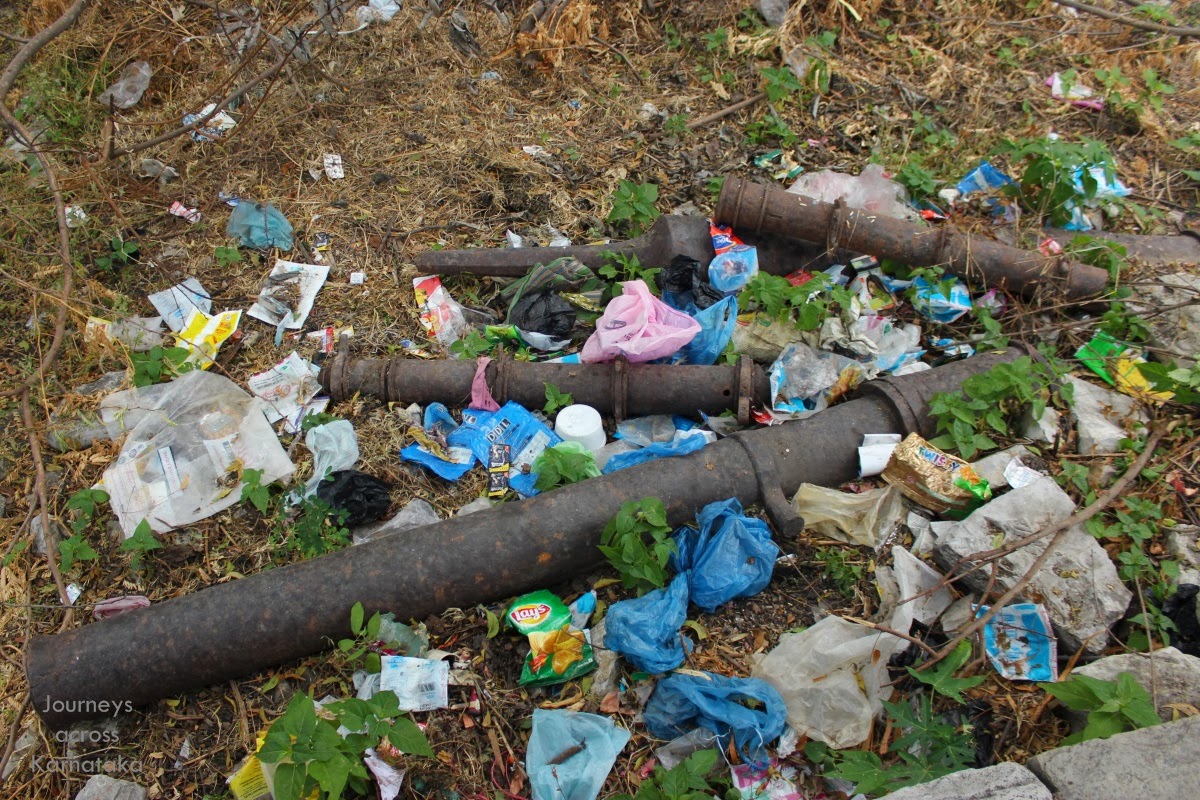 About 3 years back Malkhed fort was in news - Malkhed fort to get a facelift, nothing much has improved since then. Except for a rusty old ASI board declaring this fort a protected monument, there no other board or signage about this historically important place.

I thanked my guide for his time and left the fort. There was more to see such as the Jain Basti and Jayatheertha Brindavan however I decided to skip them because of time constraint. We head towards Gulbarga.. my next destination was Martur fort.

Good to see the details of this place. If there was one fort that Karnataka govt and ASI had to maintain well for its historical importance then this is the one. But unfortunately that is not the case.

Great work,thanks for information to u and ur guide

thanks for the information.

Really great.
Amoghvarsh, the great ruler's information was made available in this site. Though it is decaying, but life is made alive through monuments.