Maratur fort was discovered by chance while scanning Gulbarga district on Wikimapia. Maratur is about 20+ kms south of Gulbarga, off Gulbarga-Shahabad road.

November 29, 2013
Our day rolled off with a drive to Malkhed fort and back to Gulbarga. Breakfast was at a cart vending fresh and hot idli, vade, upit, tea :) Then we took the ring road, found the right junction linking to Shahabad. Road was good, not much traffic at that time, its easy to miss the right turn.. in fact we over shot 4 kms. Finally we found the turn and reached Maratur village. Fort's bastions very visible from the outskirts. 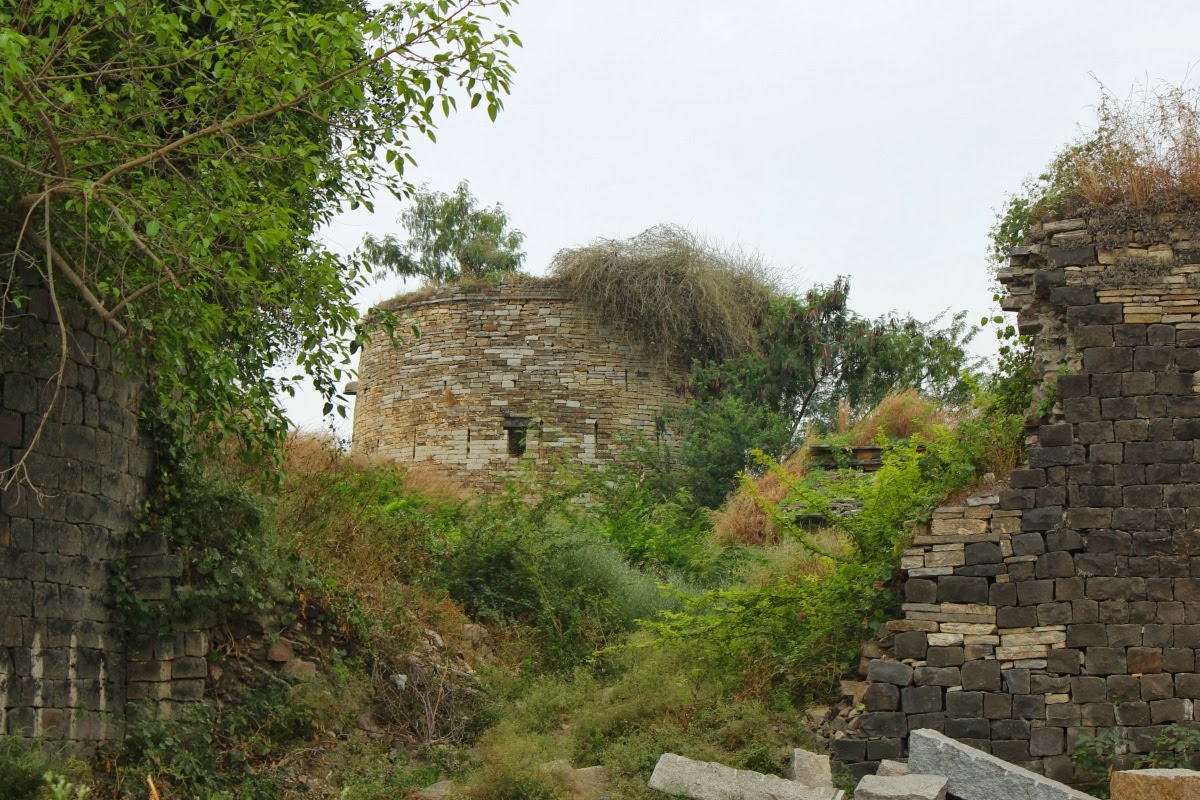 We drove through the very narrow street towards the fort entrance. We stopped at an ancient temple - I had no information about this temple.. two temples. Village folks were shy but eventually became friendly. They invited me to check out the main temple- Kashi Vishwanatha Gudi. Inside, the temple premises was clean, rituals were performed regularly. This temple is also called as Shri Kalingeshwara Gudi. 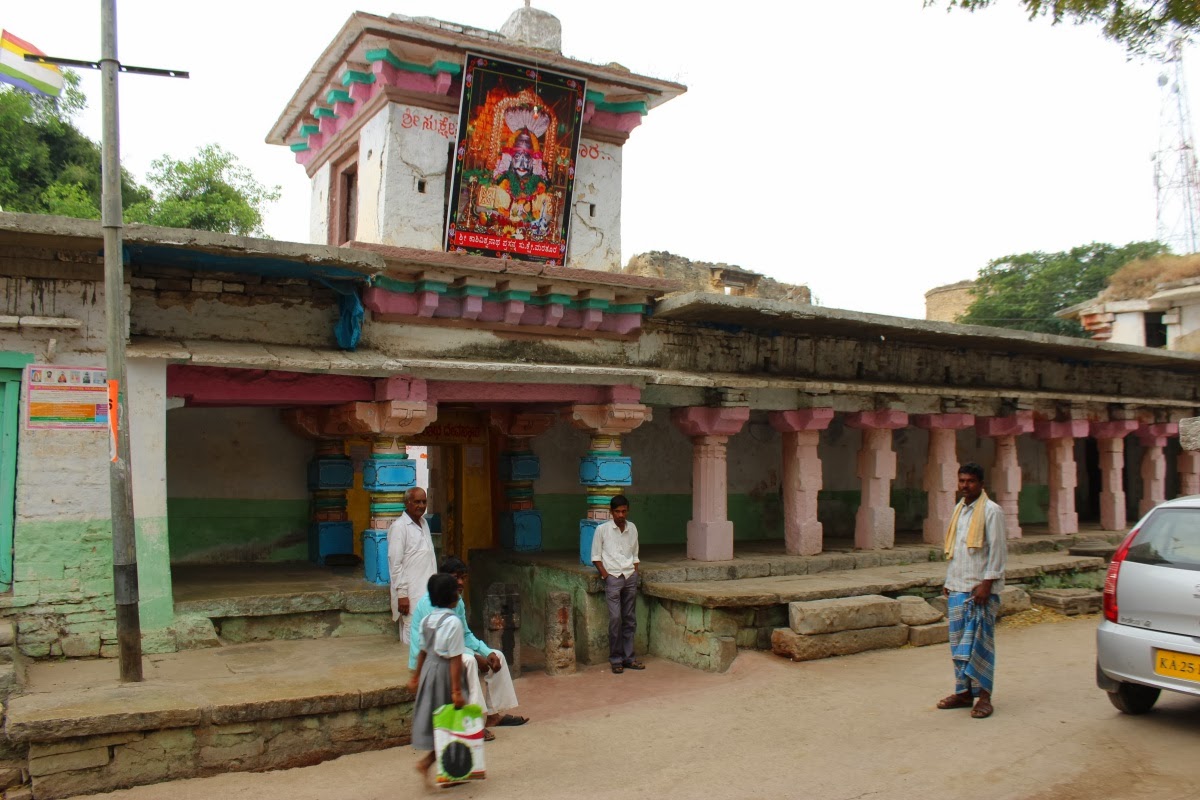 Attached to the temple is an open well with a steep stairway descending into it. Water was clean, this water is used for rituals and also for drinking. 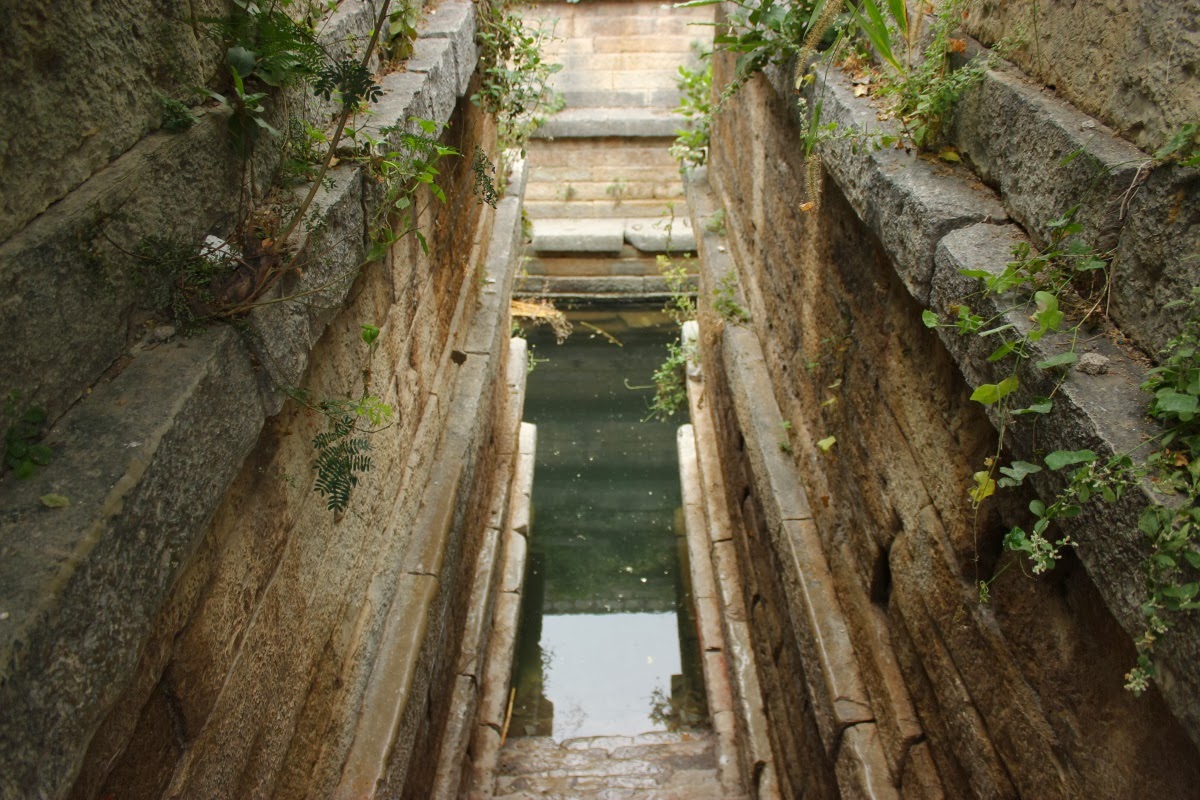 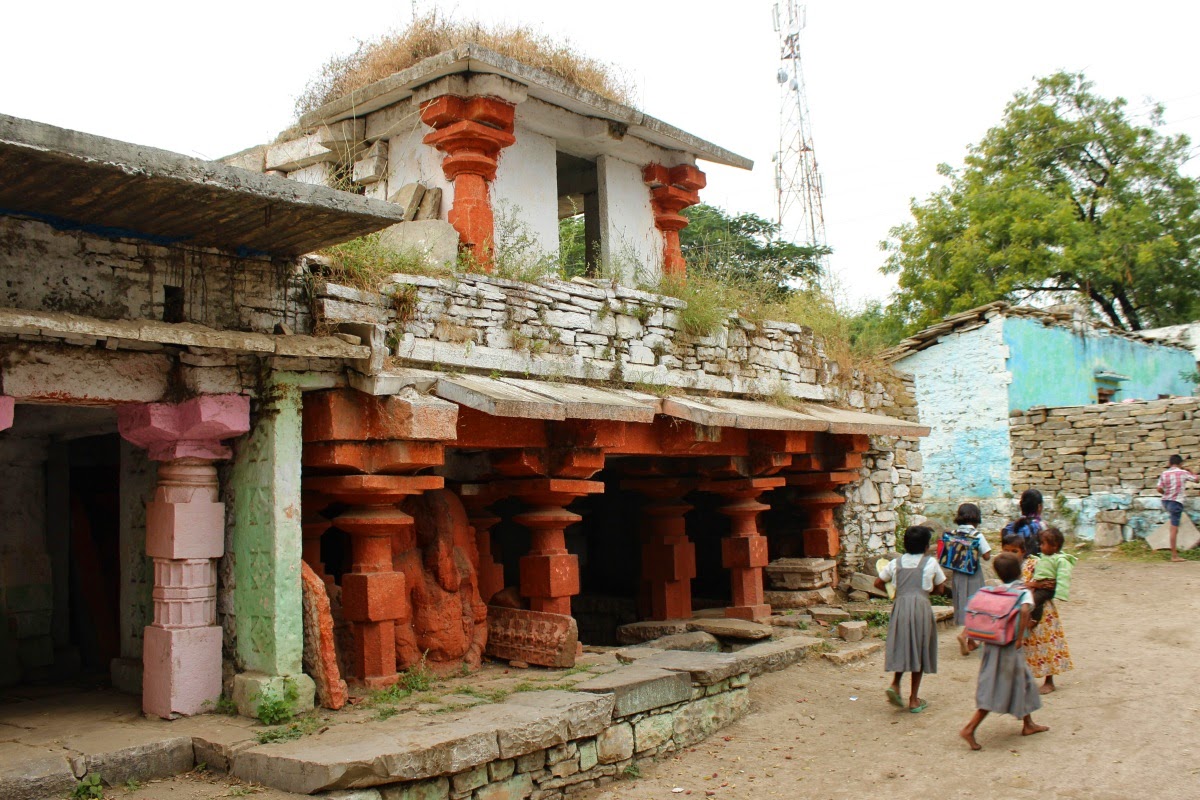 On the platform at the entrance are sculptures of Ganesha and other gods. 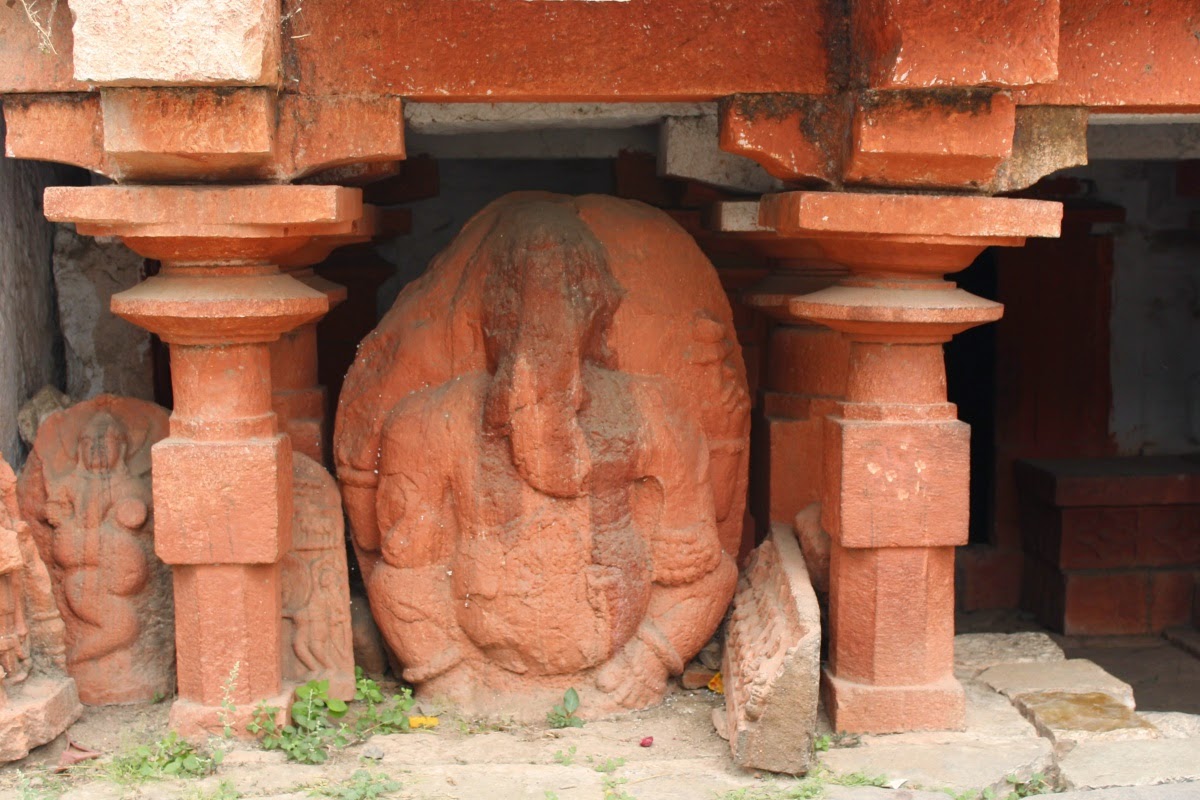 Also there are two inscriptions in Kannada. Later I learned that Maratur is known for an inscription named Mitakshara which was shifted and installed at Vijnaneshwara Bhavan. 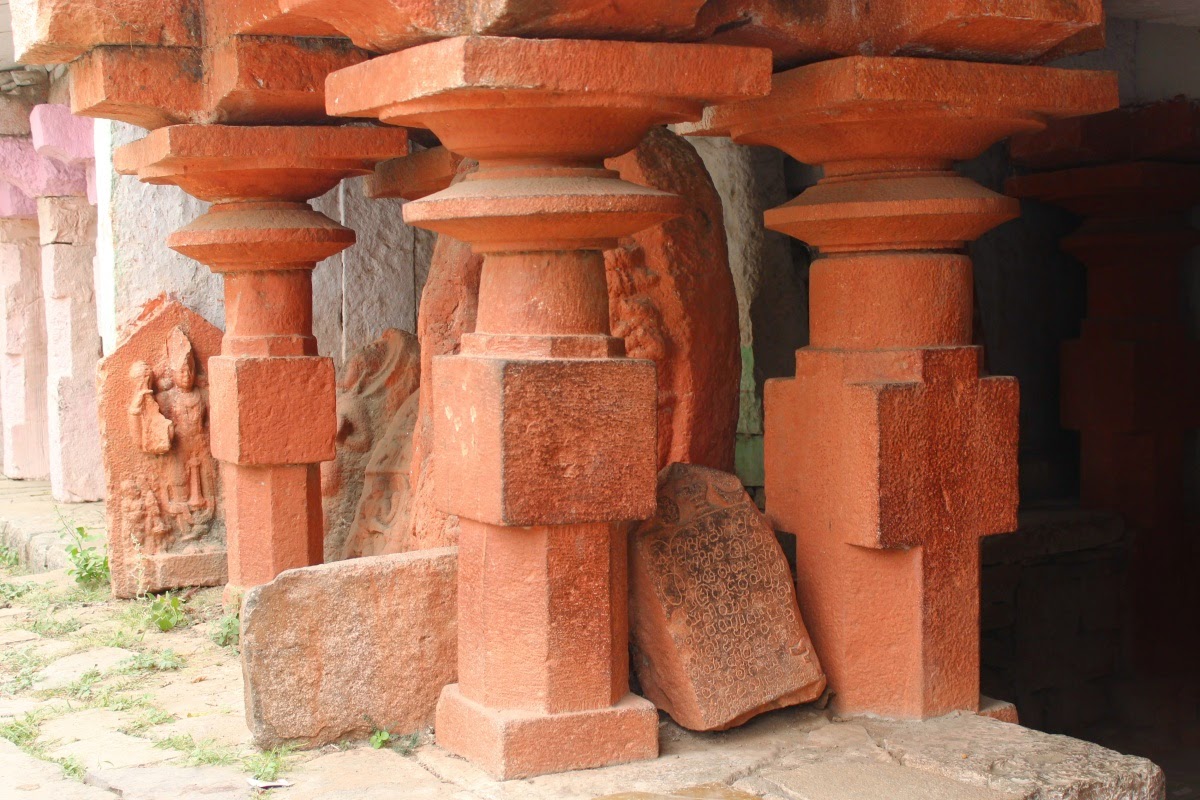 These temple were built during the rule of Chalukyan king Vikramaditya VI. Just behind these temples is the fort entrance. 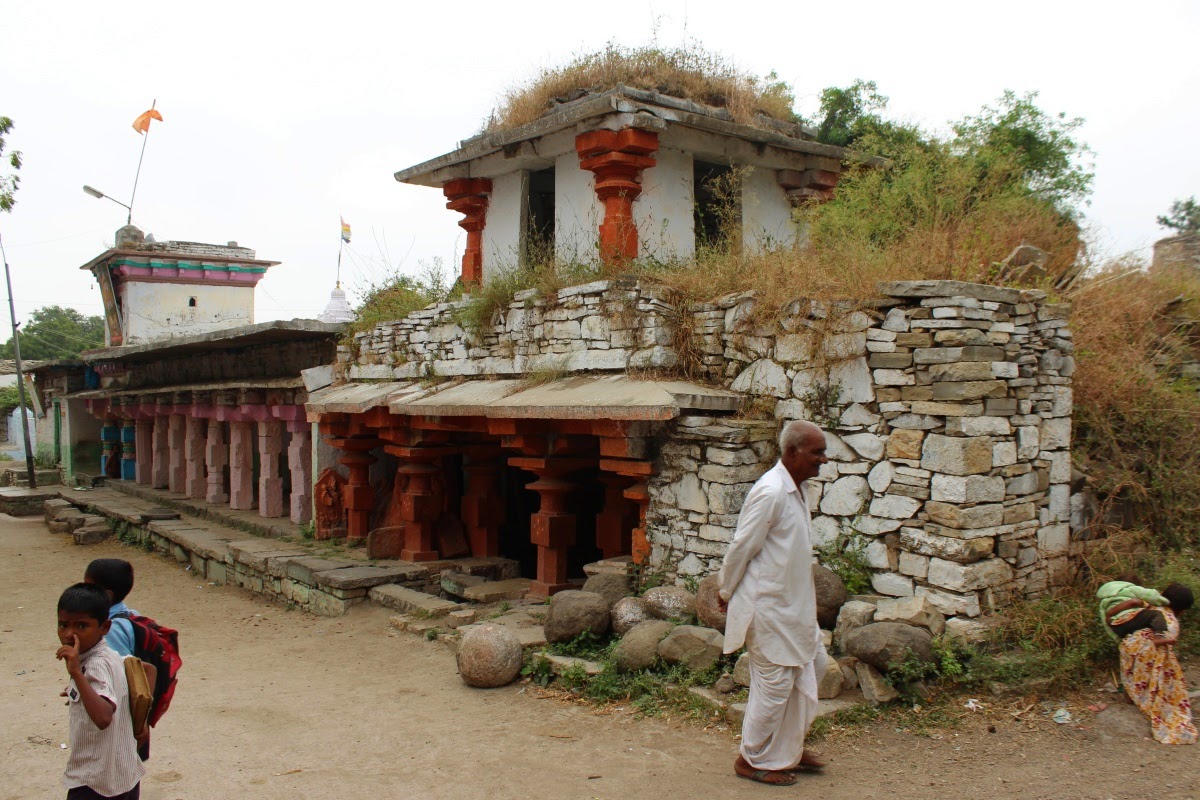 Siddanna Kalnoor an elderly person and Sharanabasappa Vishwanath the young man were my guides - first and second from left. The fort entrance is hidden behind the wall. Here two types of walls can be seen- in the front is Shahbad stone wall while the wall behind is built of harder black coloured blocks. 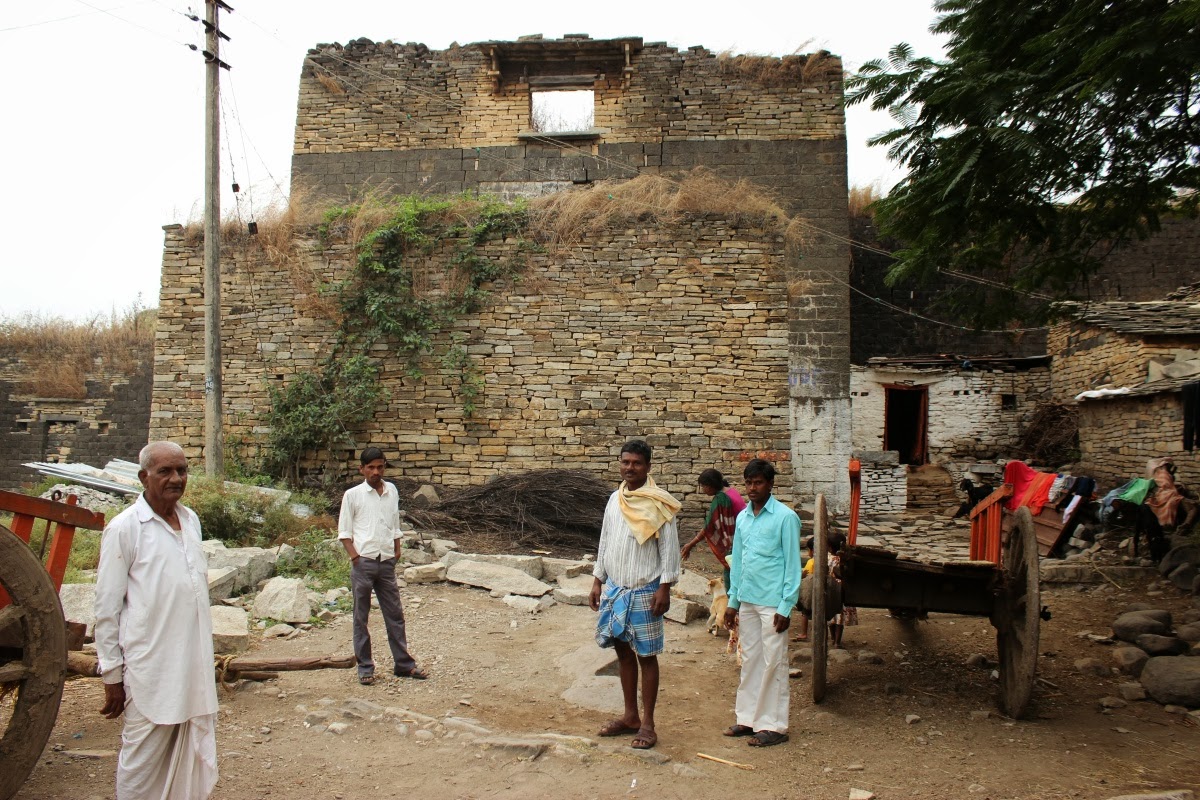 A closer look at both types of walls. Now are looking up at the fort's main entrance. This structure is generally known as vaadae rather than kote - Kannada words for fort. 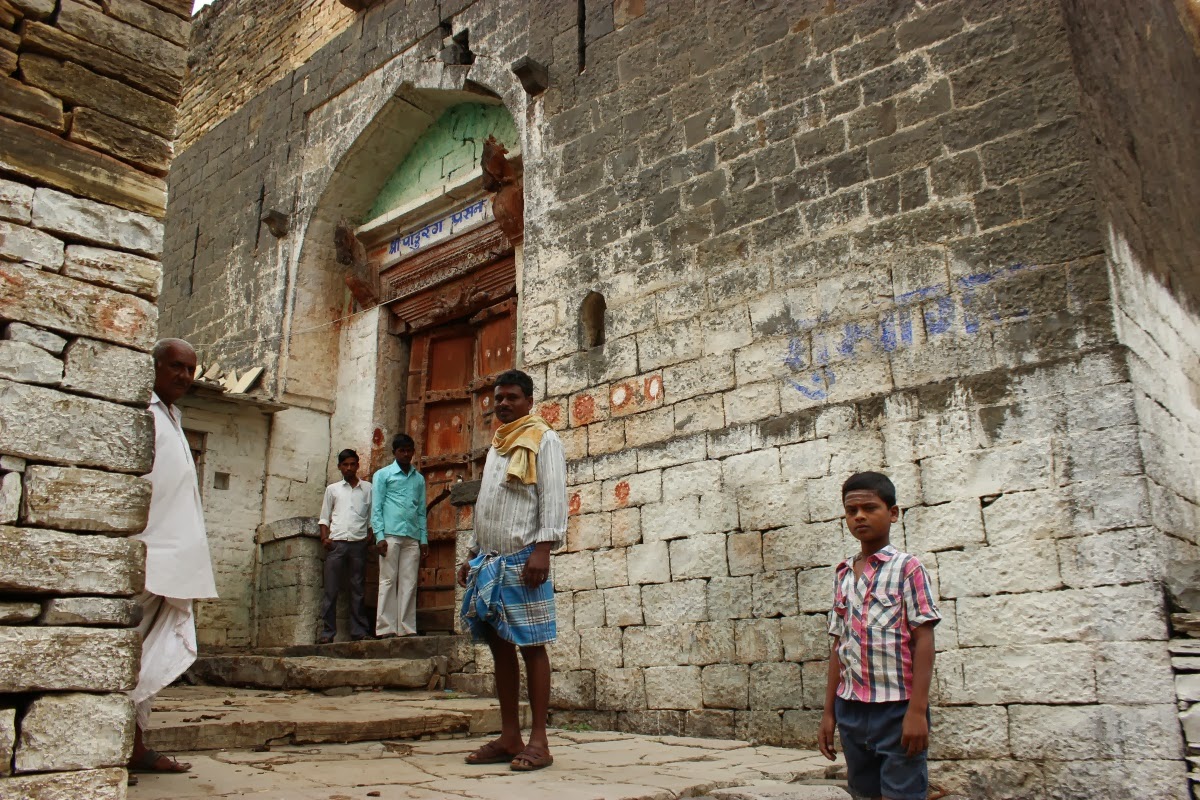 This doorway was a grand sight during its days. The doorframe is decorated with rich art, c pair of prancing horses flank the lintel. Sadly woodwork has faded and corroded. 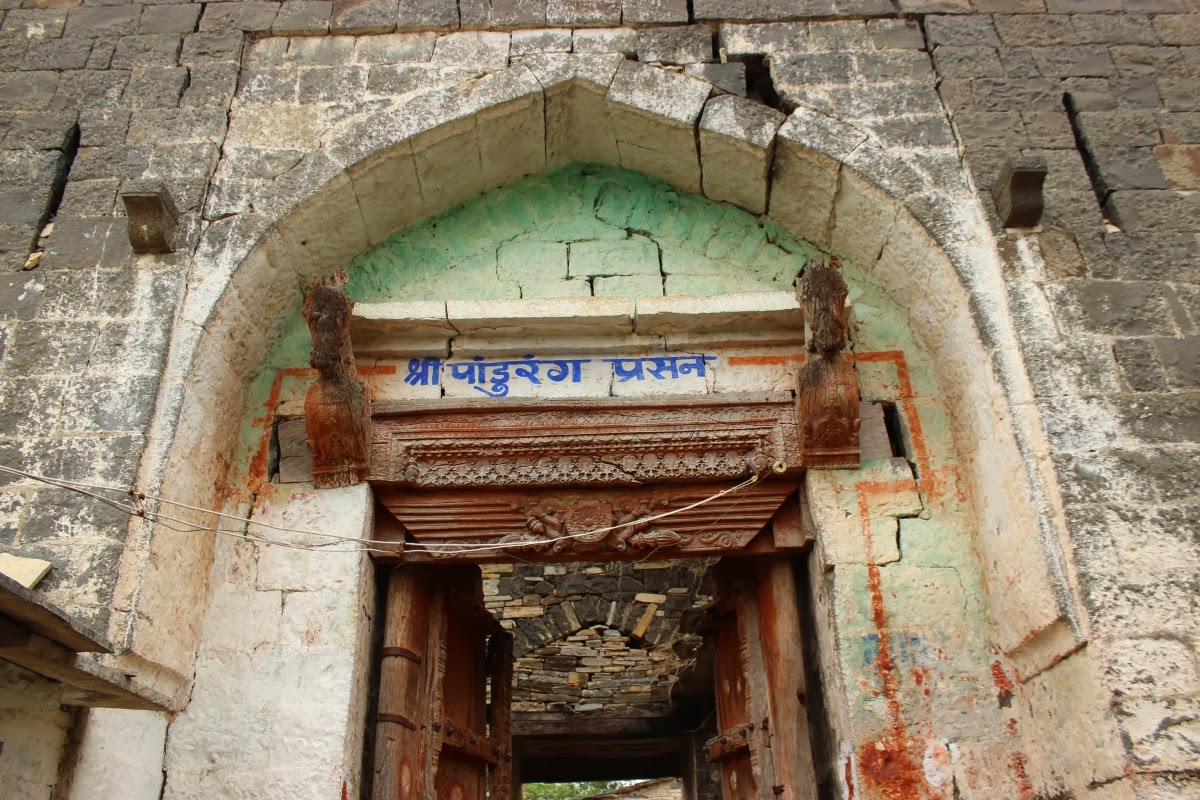 The massive wooden doors though aged carry out their function well.  Note the raised platforms flanking the doorway - this is a common feature in any vaadae in North Karnataka. In fact some are higher. 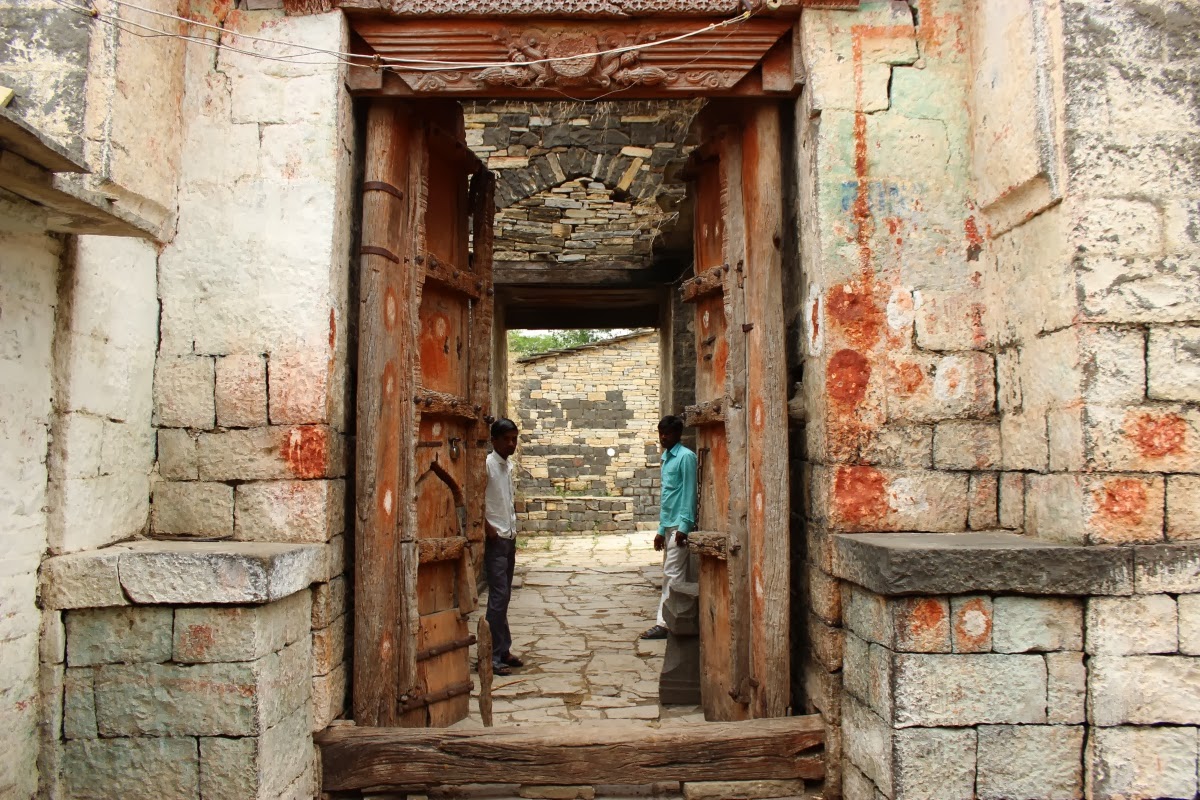 View of the main entrance from inside. Within the fort, are several structures.. dwellings, animal shelters and store rooms. Few more people had joined us out of curiosity. 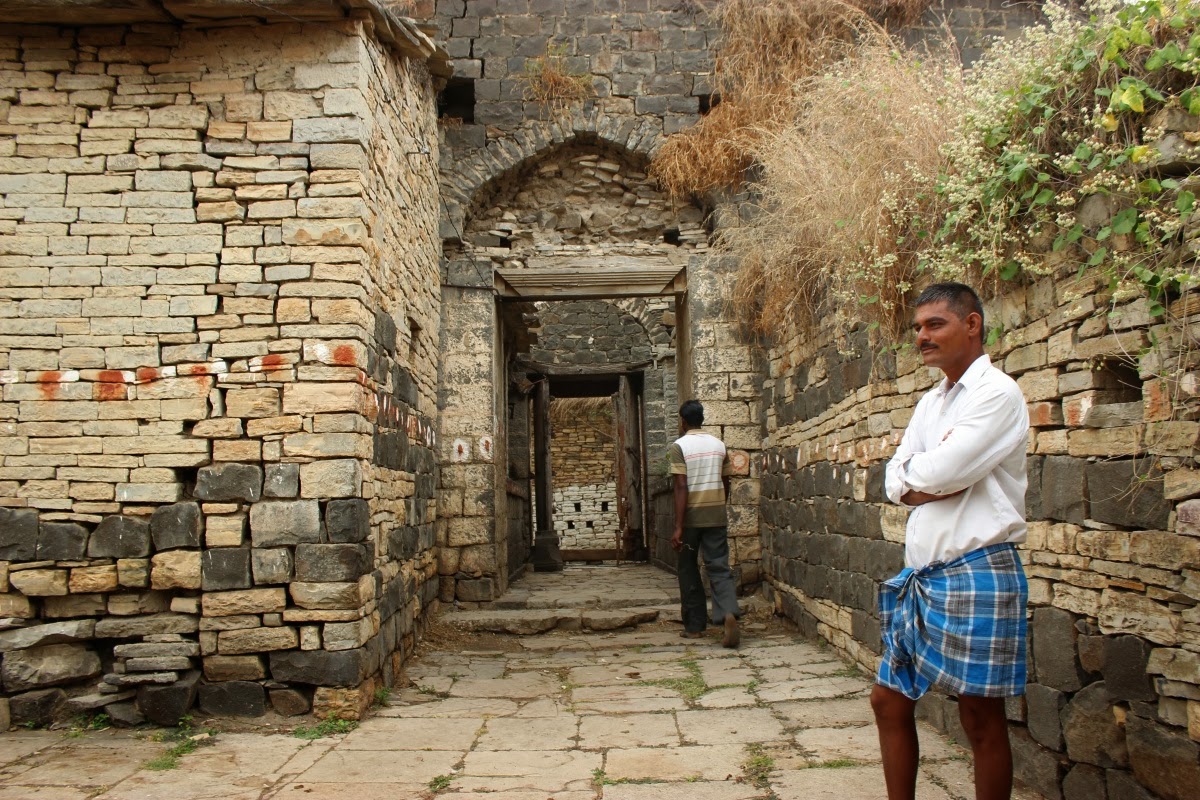 The white walled structure is actually the house, the present day owner of this fort lives there. Check out the sloping roofs here, what seems like tiled roof are actually stone slabs measuring 2' x 2'. Majority of buildings in rural Gulbarga have Shahabad stone walls and black stone slab roofs. 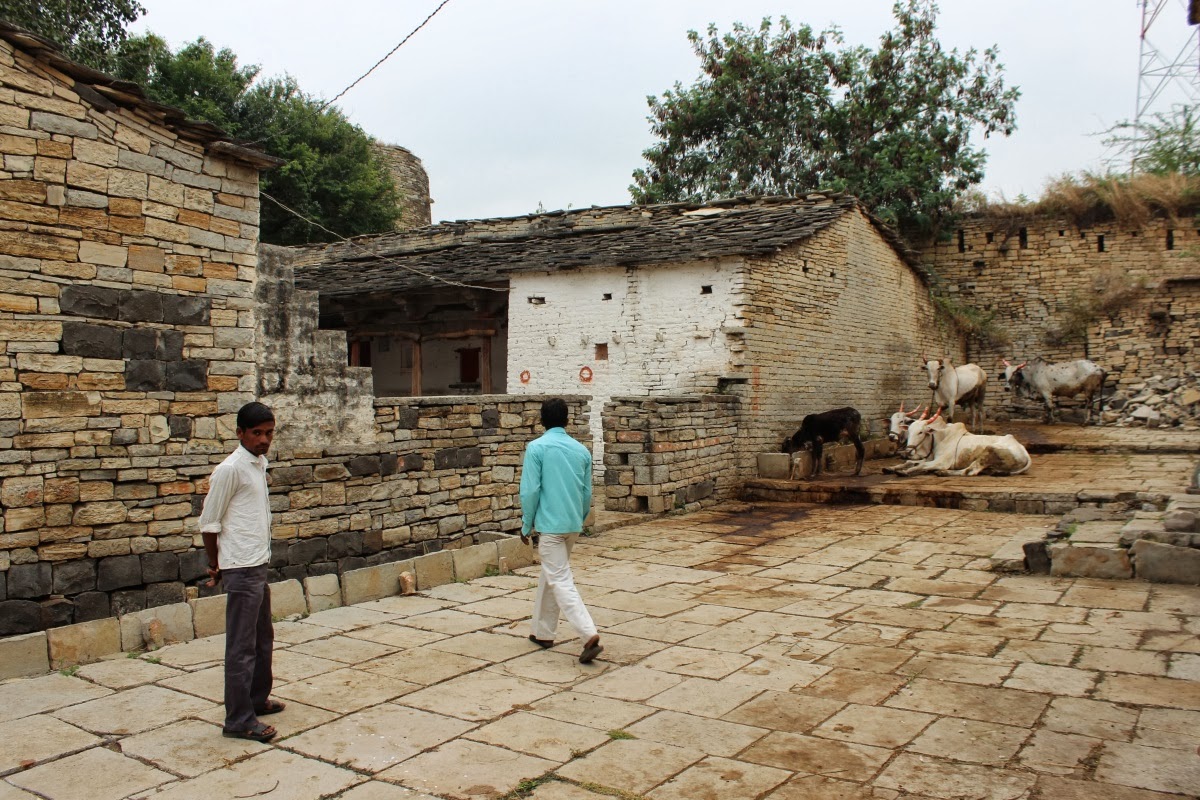 This fort has six bastions of which five can be seen. The bastion seen below is one of the three still standing. 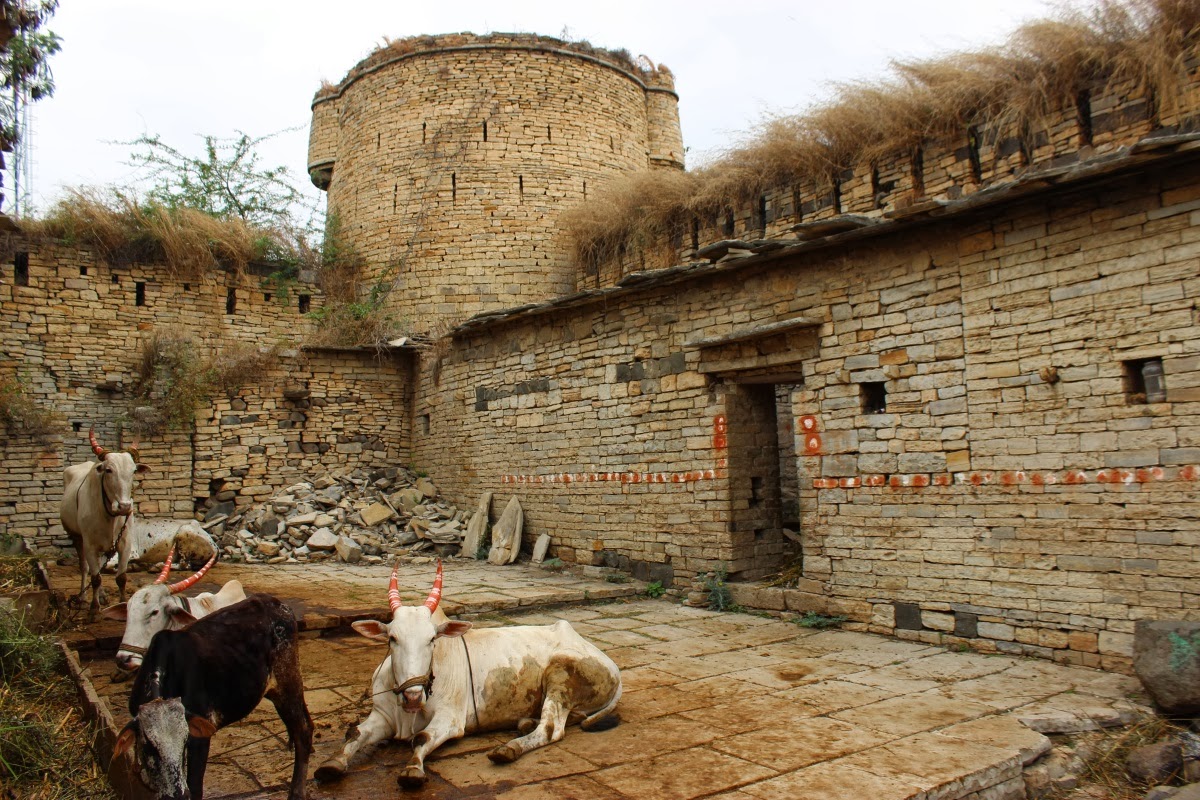 Idol of ganesha abandoned below a banyan tree. A stone bowl for cattle to drink water (see inset). 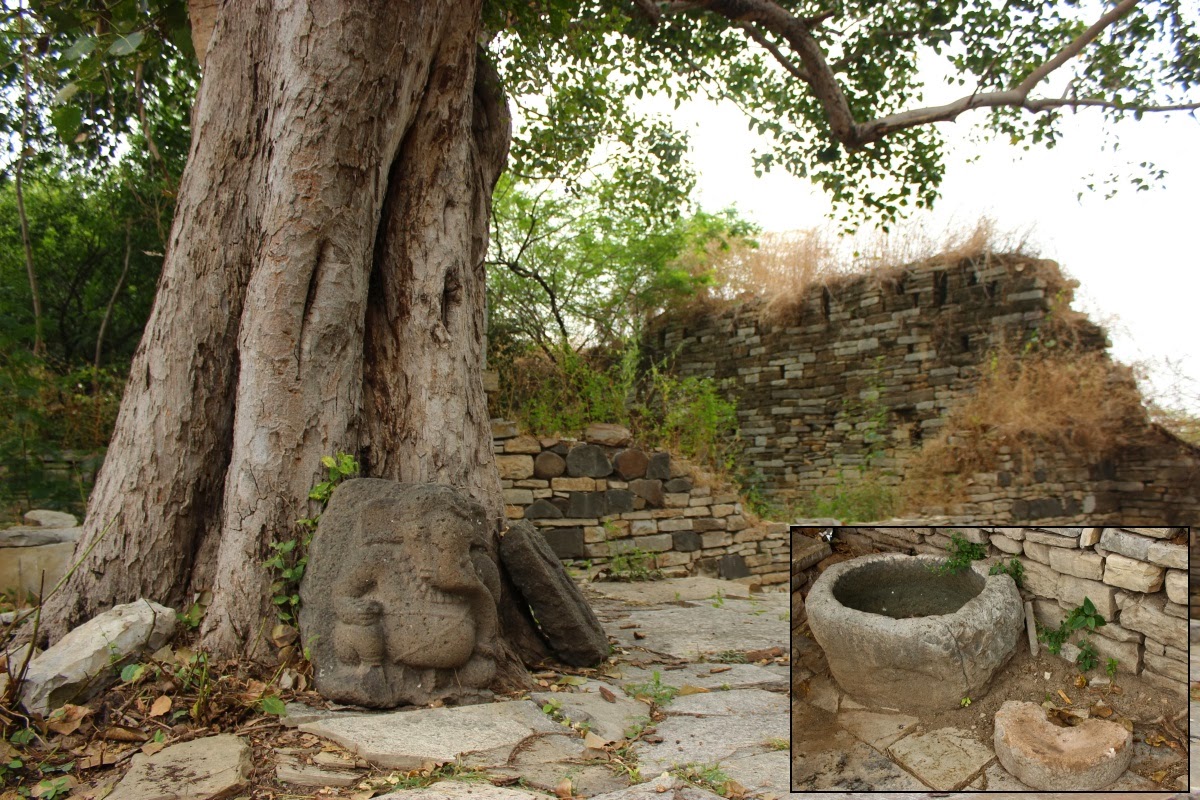 The owner's house ~ Gaudappana Manae with a big Tulasi Katte. One of the villagers mentioned this fort had a secret tunnel to escape during emergencies. 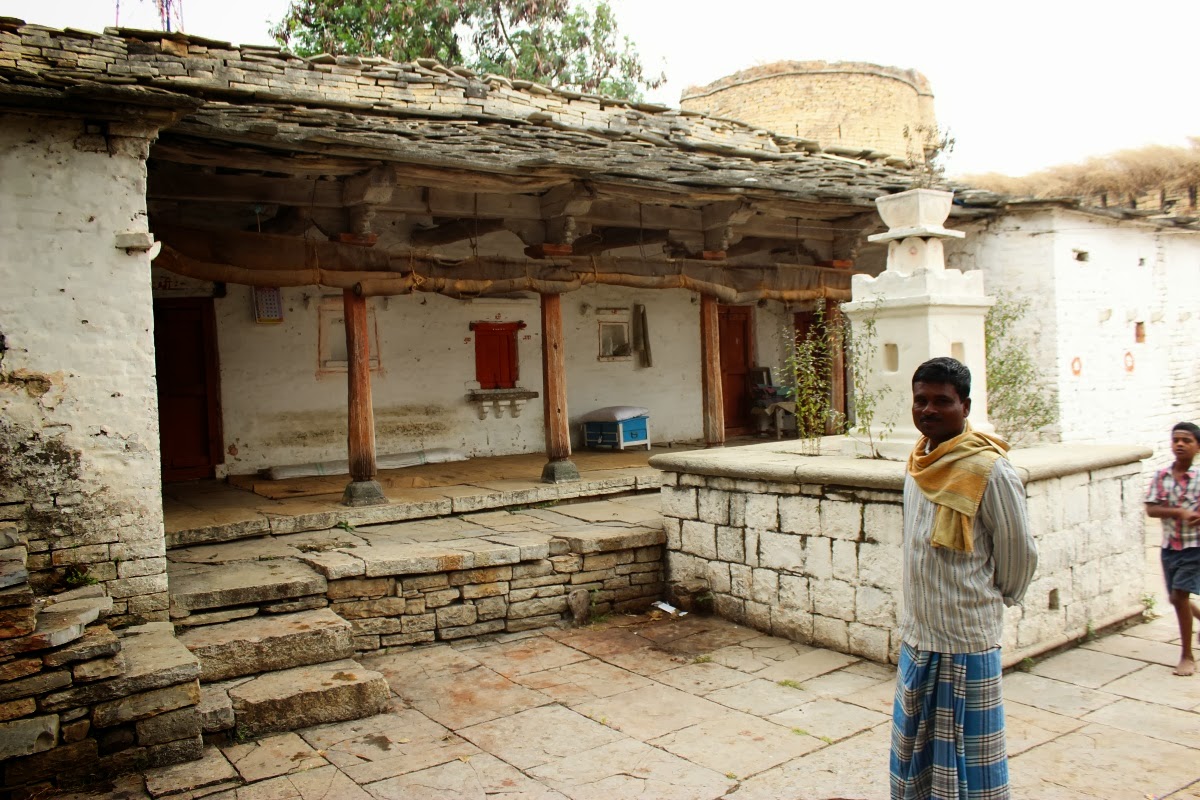 Having seen the temple and fort, I was ready to leave but my friend Sharanabasappa mentioned the recently constructed Vijnaneshwara Bhavan. Vijnaneshwara was a prominent jurist of XII century. He authored Mitakshara, a legal treatise in Hindu law about property inheritance. Rules stated in Mitakshara have been adopted by courts through out India except West Bengal. 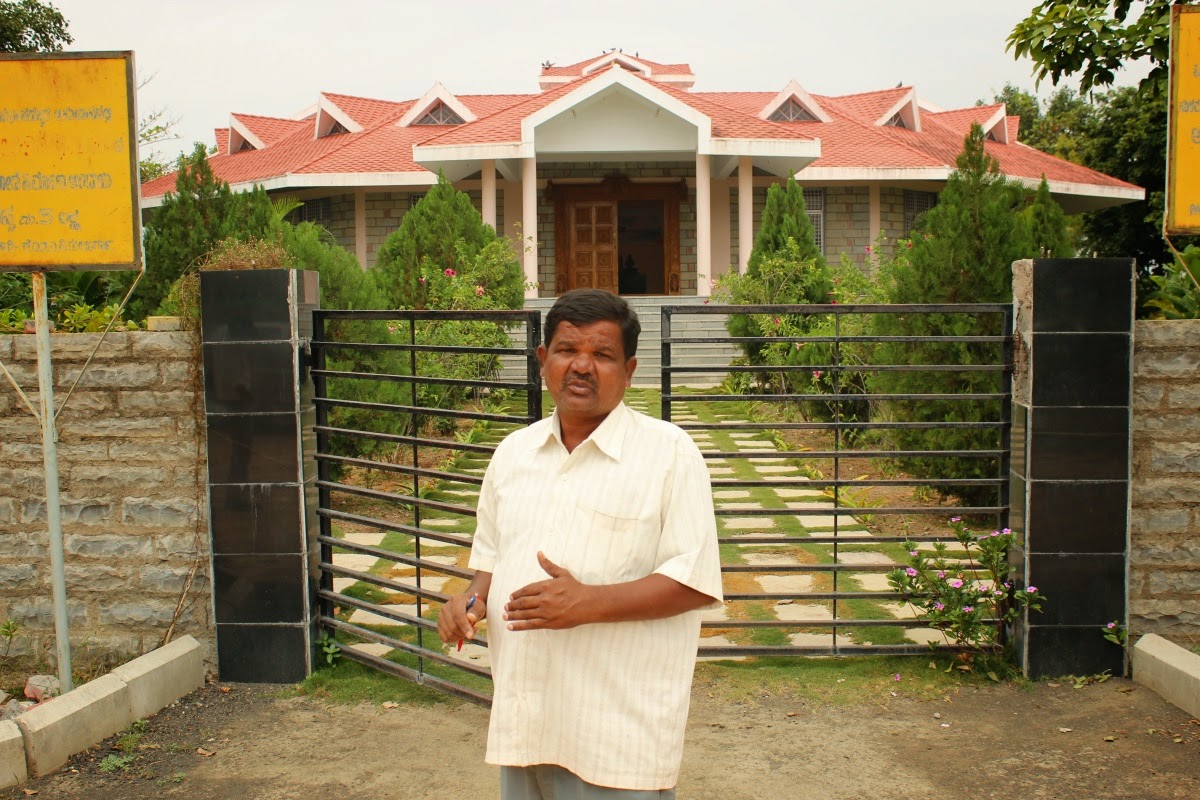 This building- Vijnaneshwara Bhavan & Research Centre -was inaugurated on Dec 31, 2004 by Shri. R C Lahoti, Chief Justice of India and Shri. T N Chaturvedi, Governor of Karnataka. This simple building, octagonal in plan has a courtyard like space in the center and surrounded by several individual halls. Idol of Vijnaneshwara mounted on a pedestal opposite the entrance. 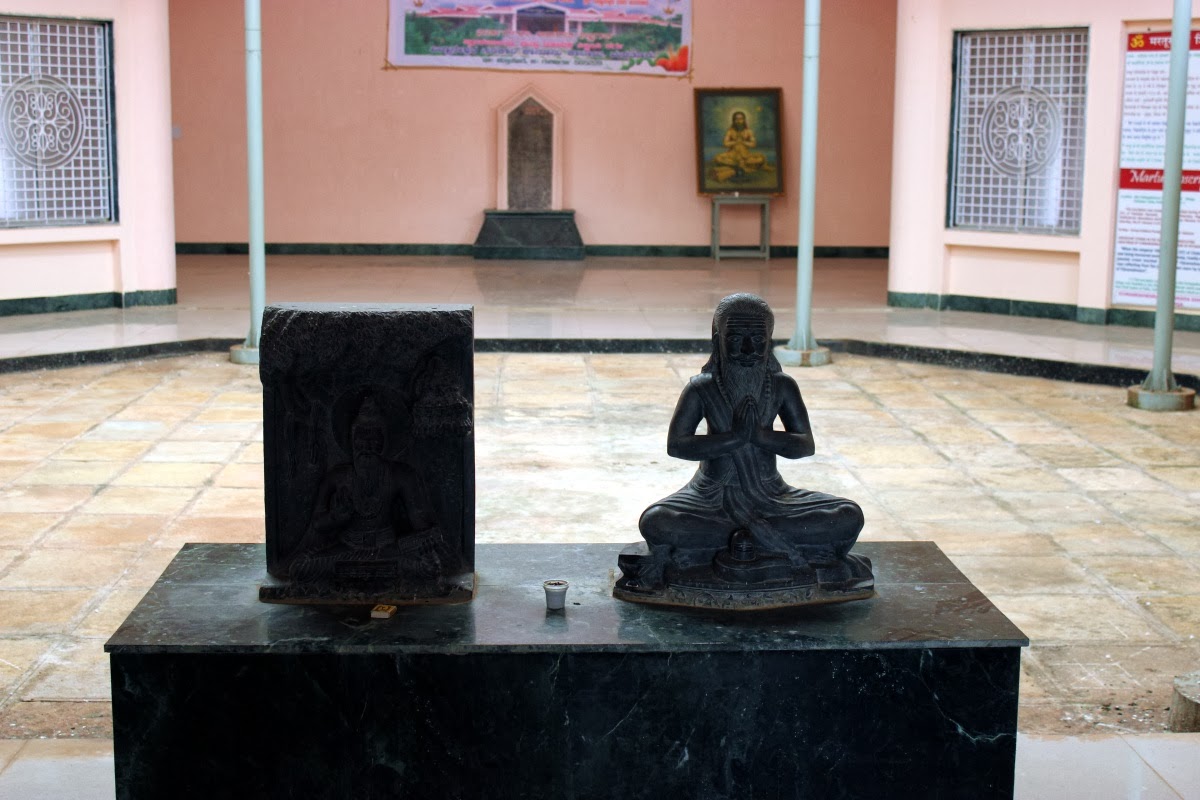 A signage gave out below information:
This inscription was composed and inscribed during the reign of Vikramaditya VI of Chalukya dynasty. It is dated Saturday, Magha Shudha Saptami of Shobhakrutu Samvastra during Chalukya Vikrama year 48 corresponding to Saturday, the 6th January 1123 AD.

This inscription was found at Shri Kalingeshwara Gudi. It was shifted and installed at here.. the black stone slab bearing the inscription is embedded into a wall. Personally I feel this is a bad idea. Mounting it on a pedestal and keeping all four sides would have been better. Besides the inscription is a life size painting of Vijnaneshwara placed haphazardly on a wooden table. 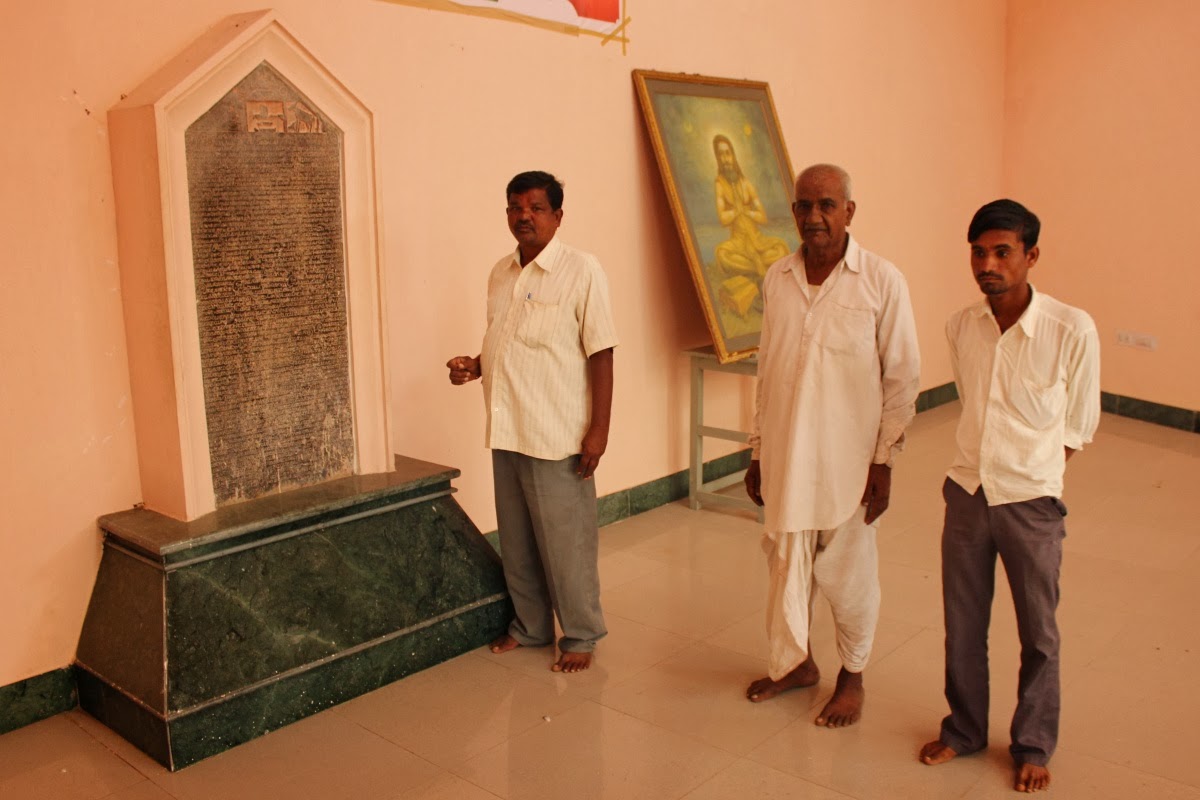 Closer look at the painting and inscription. Years ago, some political leaders conceived an idea of having a law university at Maratur, so far it has not materialised. 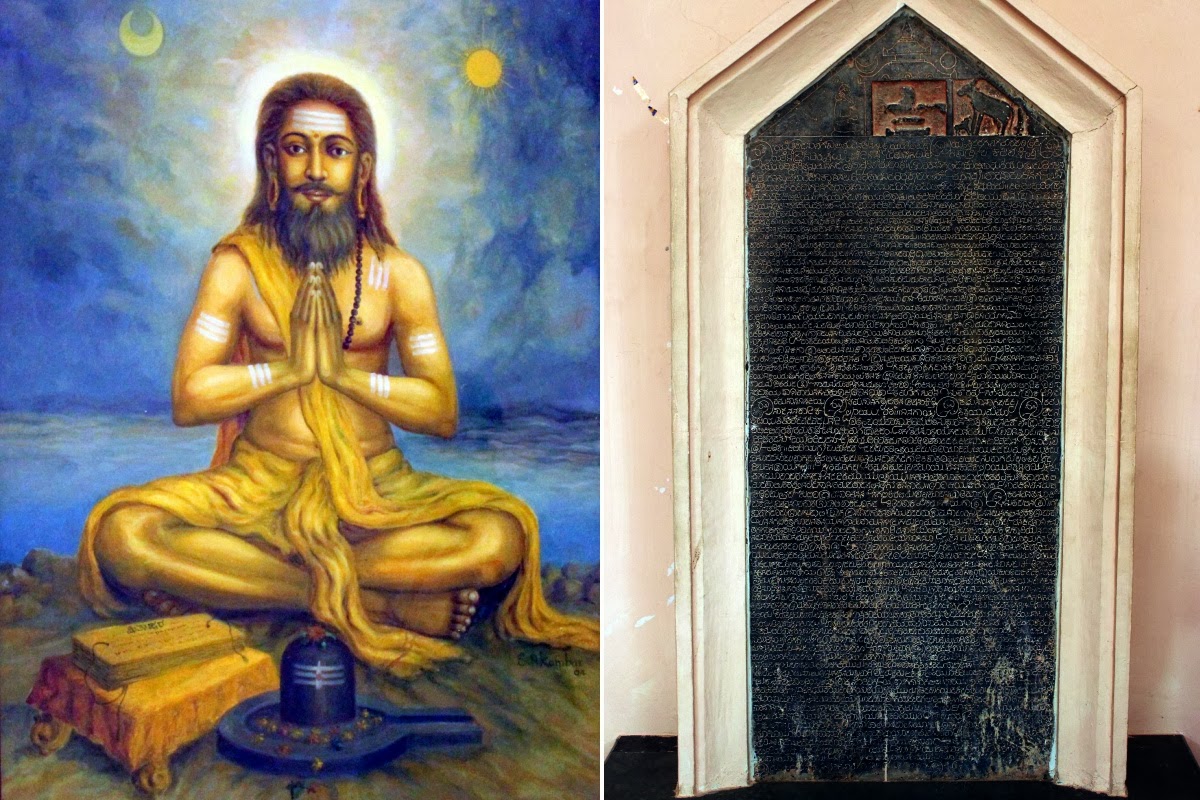 Thanks to Sharanabasappa for insisting on visiting this memorial. Now I realize the importance of Maratur.

Nice post Siddeshwar, It was a very interesting post and I enjoyed reading it. With this post on “Maratur”, you have perfectly capture the simplicity of Maharashtra. I have never visited Maratur fort but I would love to check it out.

Thank you Priti. A small correction.. Maratur is a little village in Gulbarga district of Karnataka state.

Wonderful Information Siddesh!! This is my native. Loved all the snaps. The Kashi Vishwanatha Gudi is very very old and now they are renovating it. Look forward for your more blog posts on interior parts of India which are less known. All the best.

Now there is a new road from Gulbarga to Martur which narrows down the distance to just 8KM's. Its a straight road from Koranti Hanuman Temple Gulbarga- Via- Naganahalli Police Training - Kesaratagi and Martur.

Loving your blog. I love forts and ancient monuments. Thanks a lot for this.

Dhanyavaad siddeshwar !!
Visited the place today ,was an awesome experience :)