November 28, 2013
First half of Nov 28th was spent at Sannati-Kanaganahalli archaeological site. For the second half Gurmitkal and Chandriki forts were on the itinerary. We reached Yadgir around 1-45 PM, located a Lingayath Khanawali where we had lunch and then immediately left to Gurmitkal, about 45 kilometres away. The tree lined state highway was excellent, about 20 kms, the terrain changed. The road was twisty, climbing gradually, the hills were climbing were covered in carpets of green grass - I had not expected this. At one point, I noticed a fort like wall lining a slope next to the road. Soon we reached Gurmitkal, we asked our way to the fort, crawling through narrow streets of Gurmitkal. Suresh parked close to the fort's main entrance. Opposite the main entrance  was a temple and a nursery. The orange colored structure is the temple and on the left is the entrance. 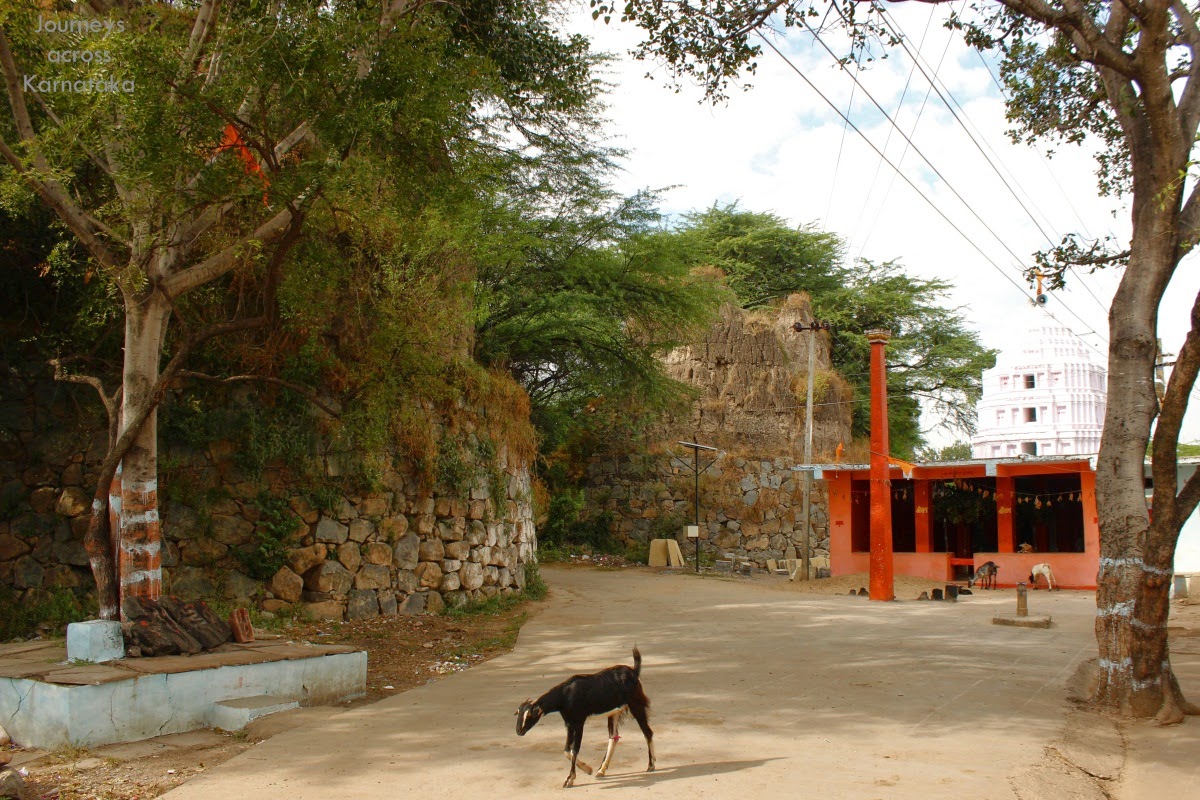 A curved path leads to the gateway arch. 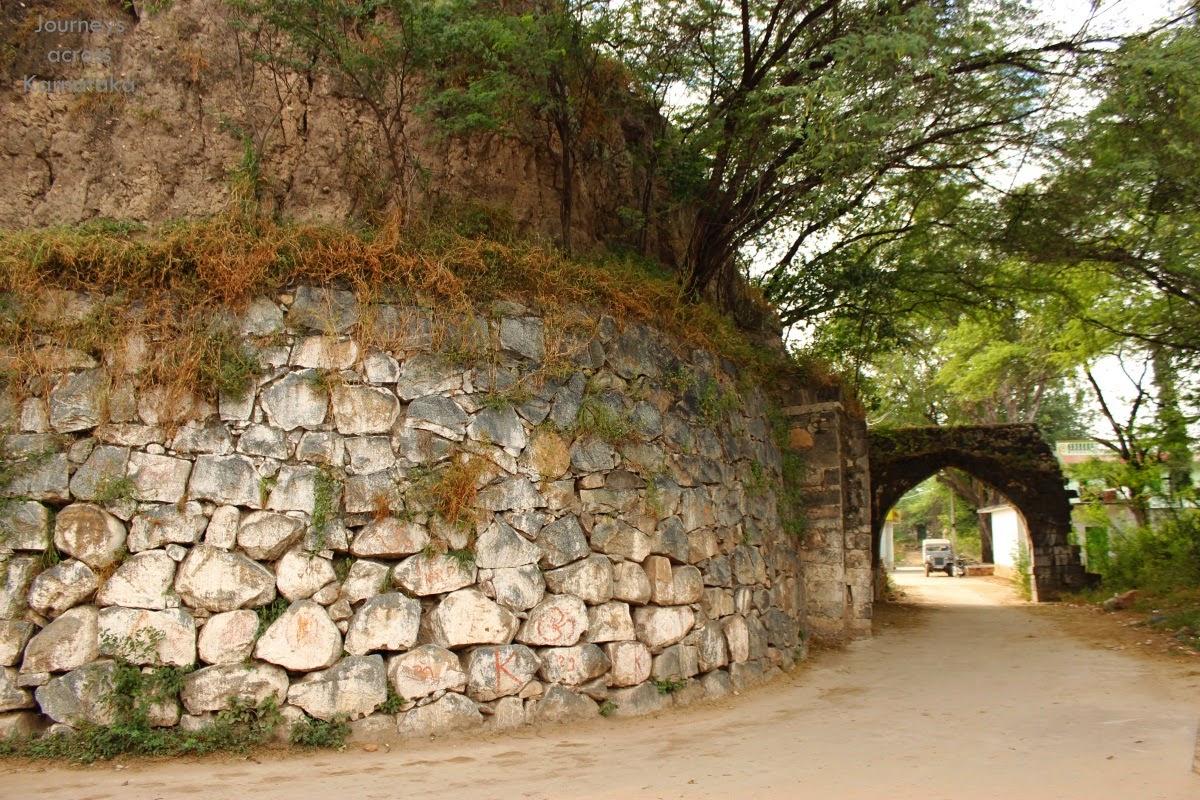 The fort's first sight surprised me. Its very different from the forts seen until yesterday. Rampart walls are made of stone and earth; the lower portion is stone wall, like a foundation and the upper portion is packed earth. Isn't it awe inspiring that these 800 to 600 years old walls are still standing. The builders have even made merlons. This is amazing. 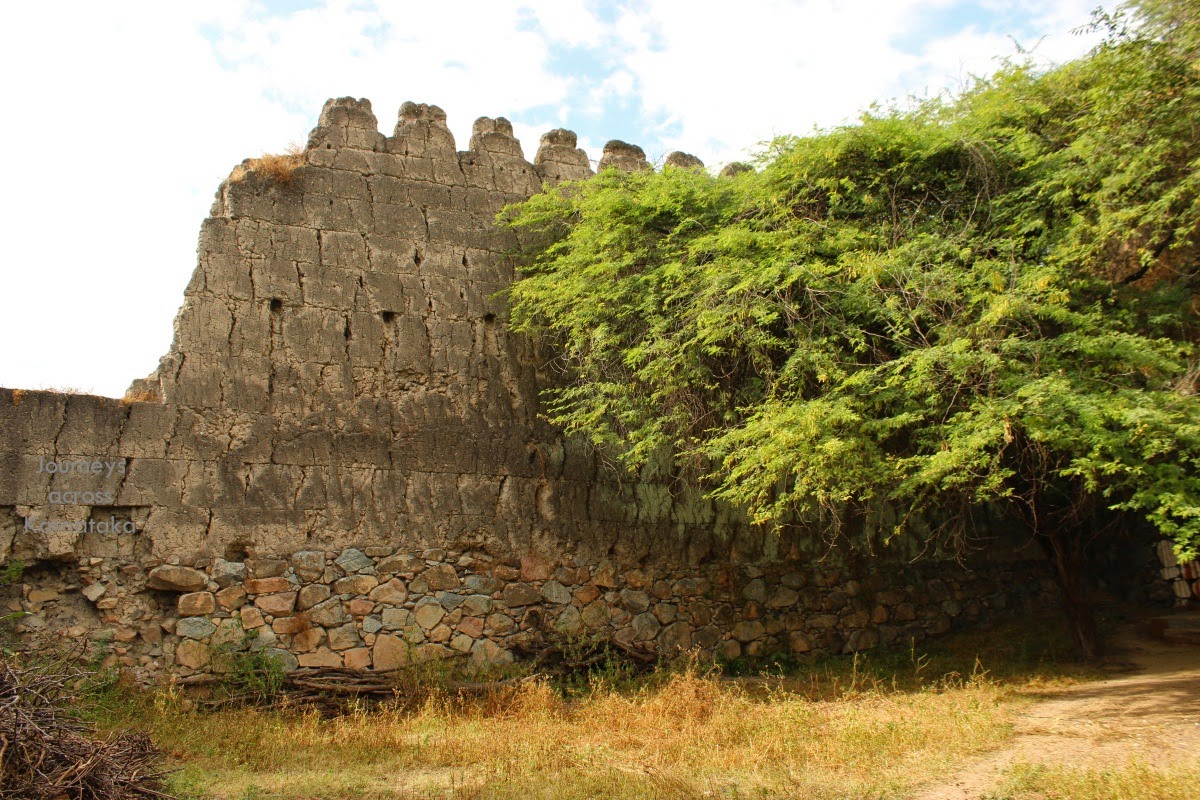 Fort entrance as seen from inside. The gateway structure is made of black dressed blocks. 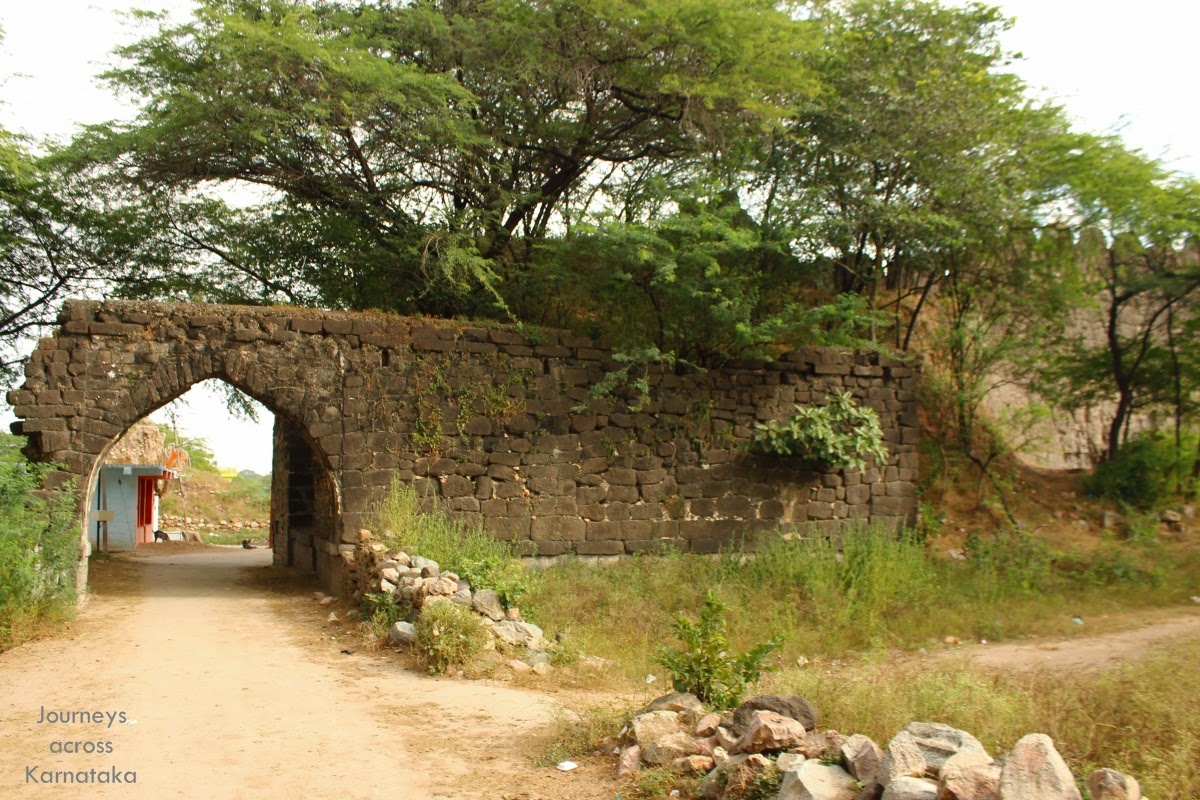 Lets take a closer look at the wall. Cross-section of the wall can be seen at this collapsed portion. The wall is tapered, wide at the bottom and marrow at the top. On the inside, earth is heaped against the wall - this is done to increase the mass which in turn increases the impact strength of the wall.. in case enemies pound the wall with cannon fire. The heaped earth also provides a platform for soldiers. I think these walls were plastered regularly back then. At present, due to lack of maintenance, the walls are corroding. See how earth has eroded from the merlons (see inset). 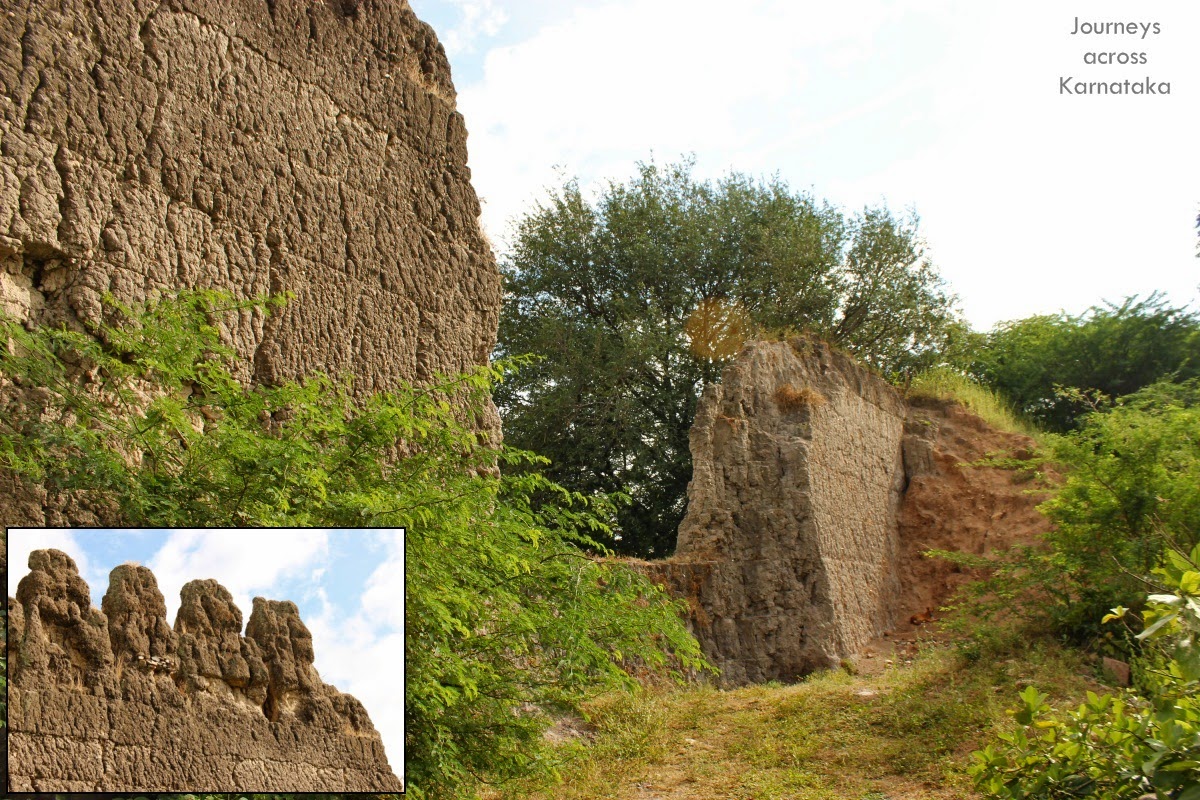 The fort has one well. What was once a grand structure is now neglected completely. Water level was barely 10' below ground level. Close to the well is a house, I asked the occupant if he could show me around. He agreed, I can't remember his name.. he was a Muslim. 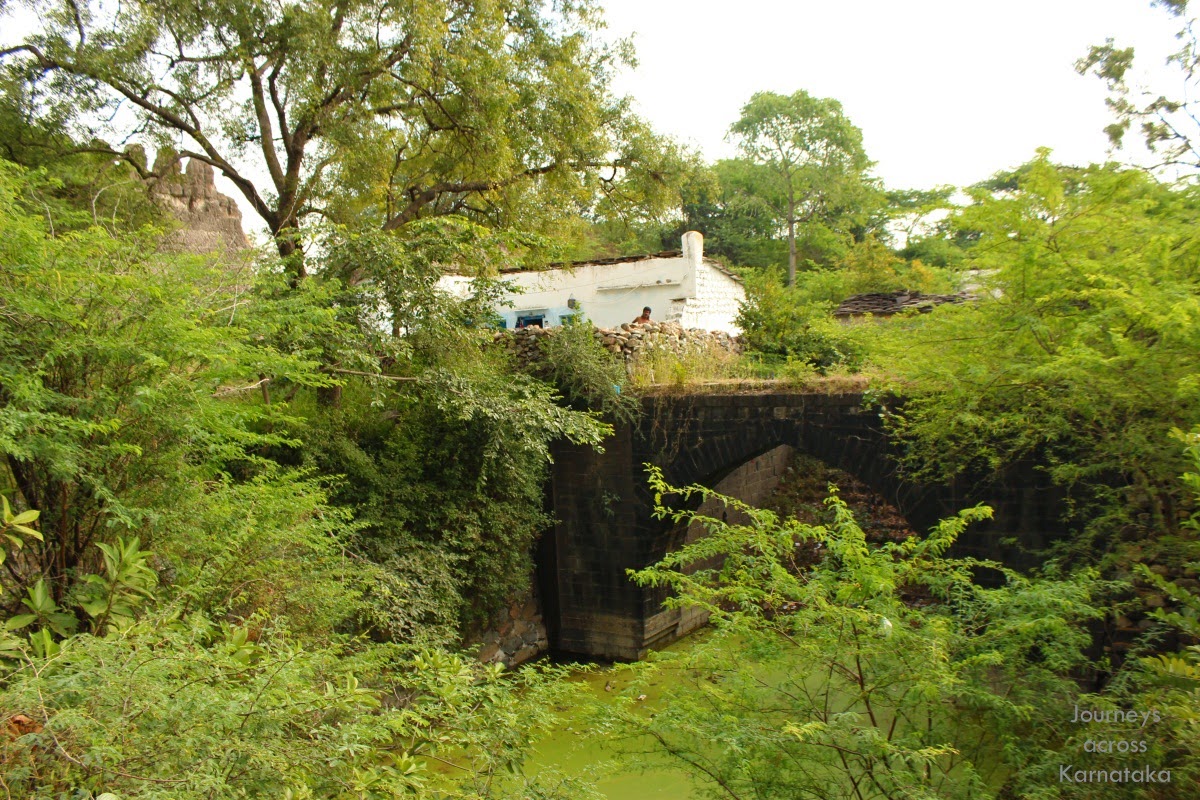 He lead me through a foot path which went around the fort. Jaali Gida had covered most of the area, there was little we could explore. That ancient structure must have been a part of a palace within the fort. 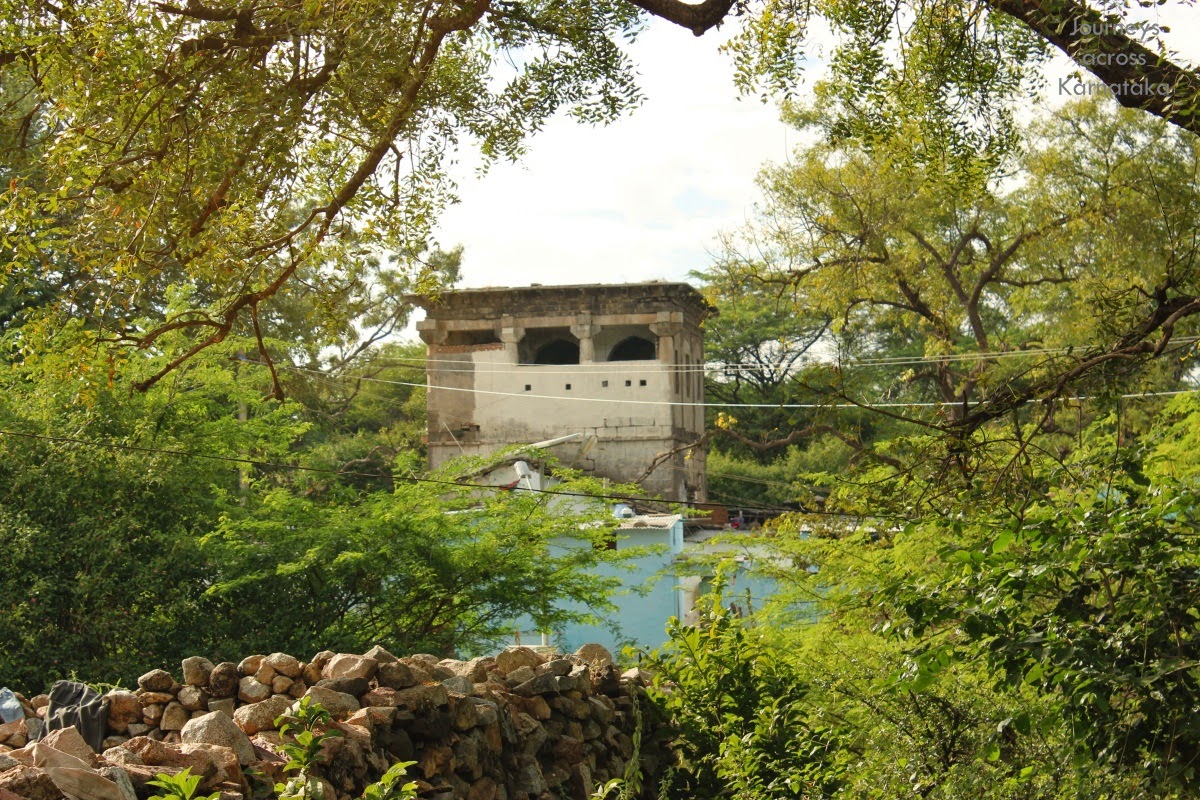 This is probably the northern wall. 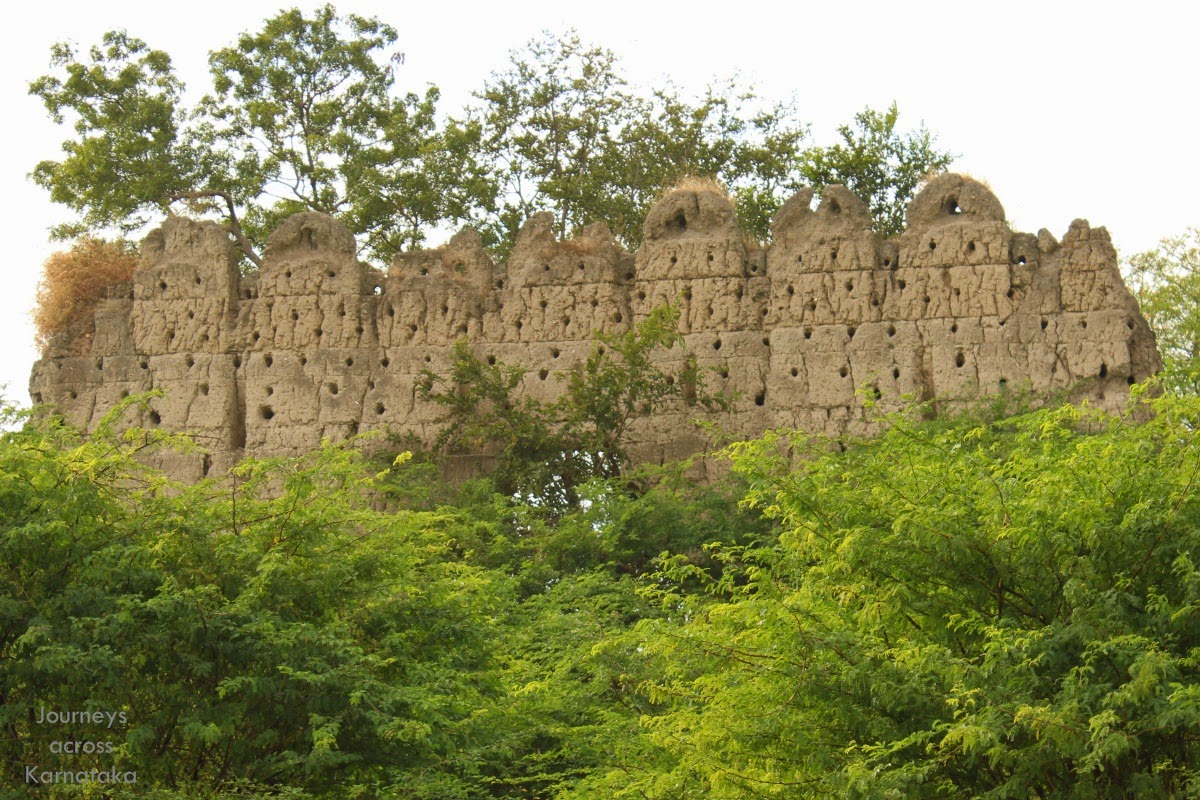 Another view of the ancient structure, it is occupied, probably another Muslim family. This region was part Nizam's kingdom, hence many forts close to Karnataka-Andhra border are occupied by families serving the Nizam. 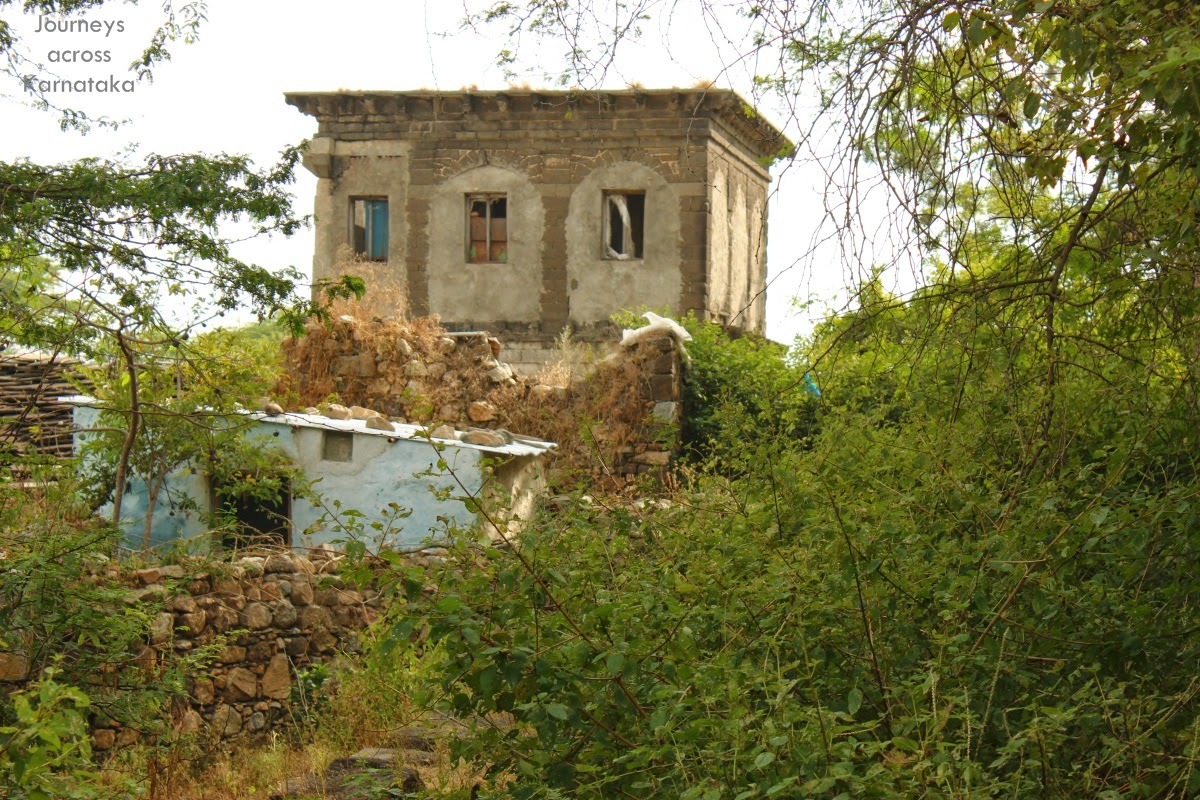 Part of western wall- rampart wall and a crumbling bastion. 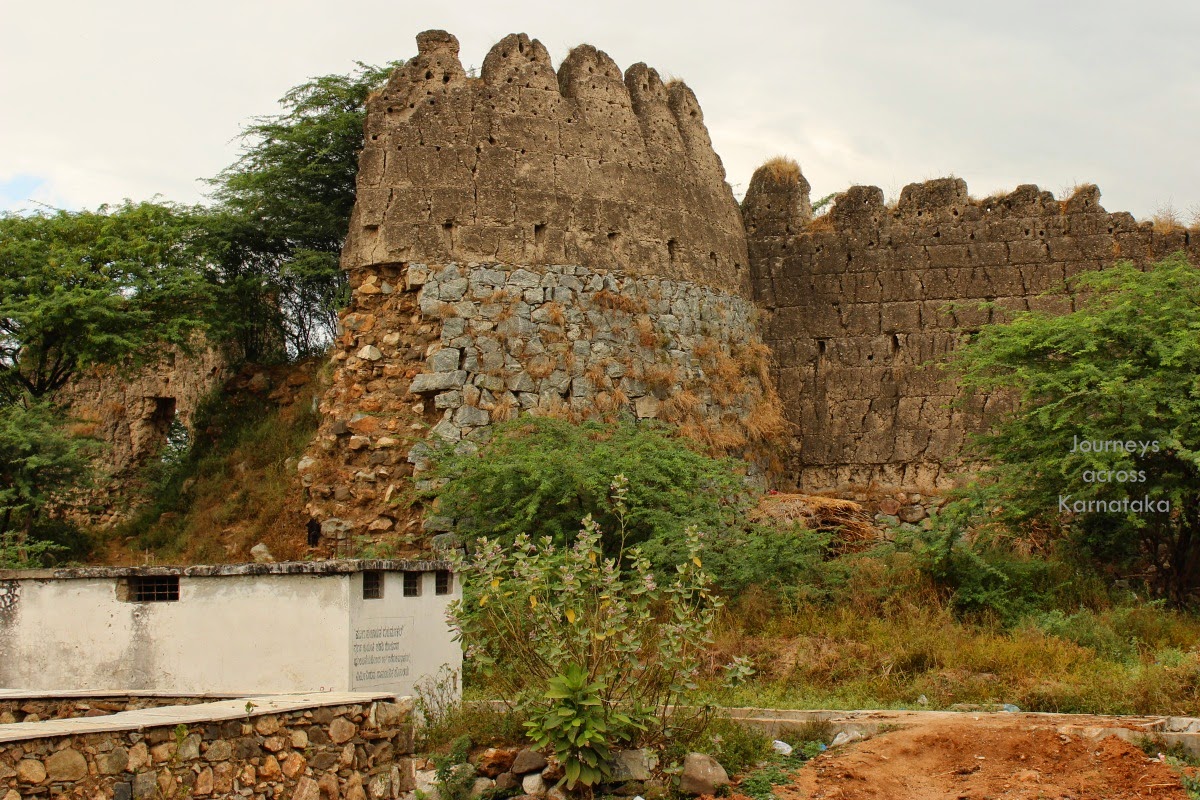 There wasn't much to see here, I came back to the fort entrance. In the temple were two men, I asked what else was there in this fort and town of historical importance. Harish, the younger of the two asked me if I had seen Ramteerth Bhavi. No, can you show take me there. Yes, let's walk, its half kilometer away. In two minutes we were out of the town and walking in paddy fields. 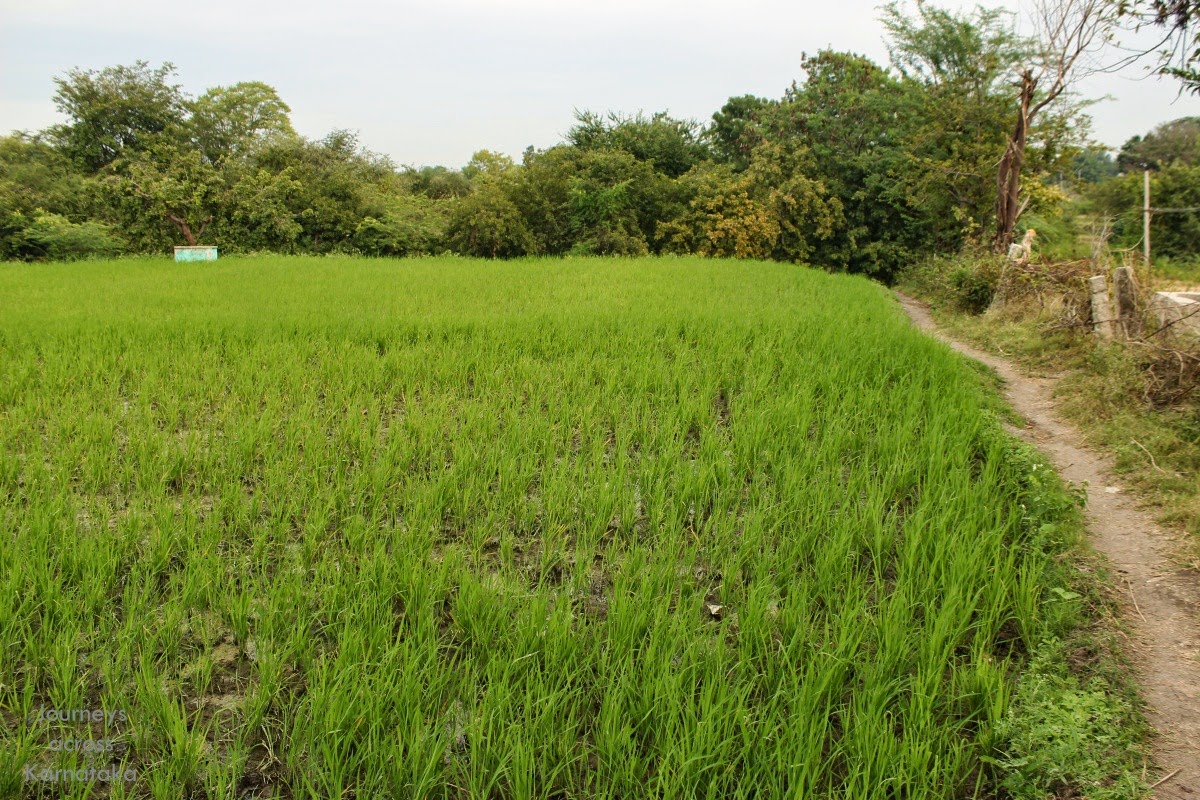 Where the fields ended was a stream across our path. Water at this time of the year is less, we could jump over rocks and cross the stream without wetting our feet. 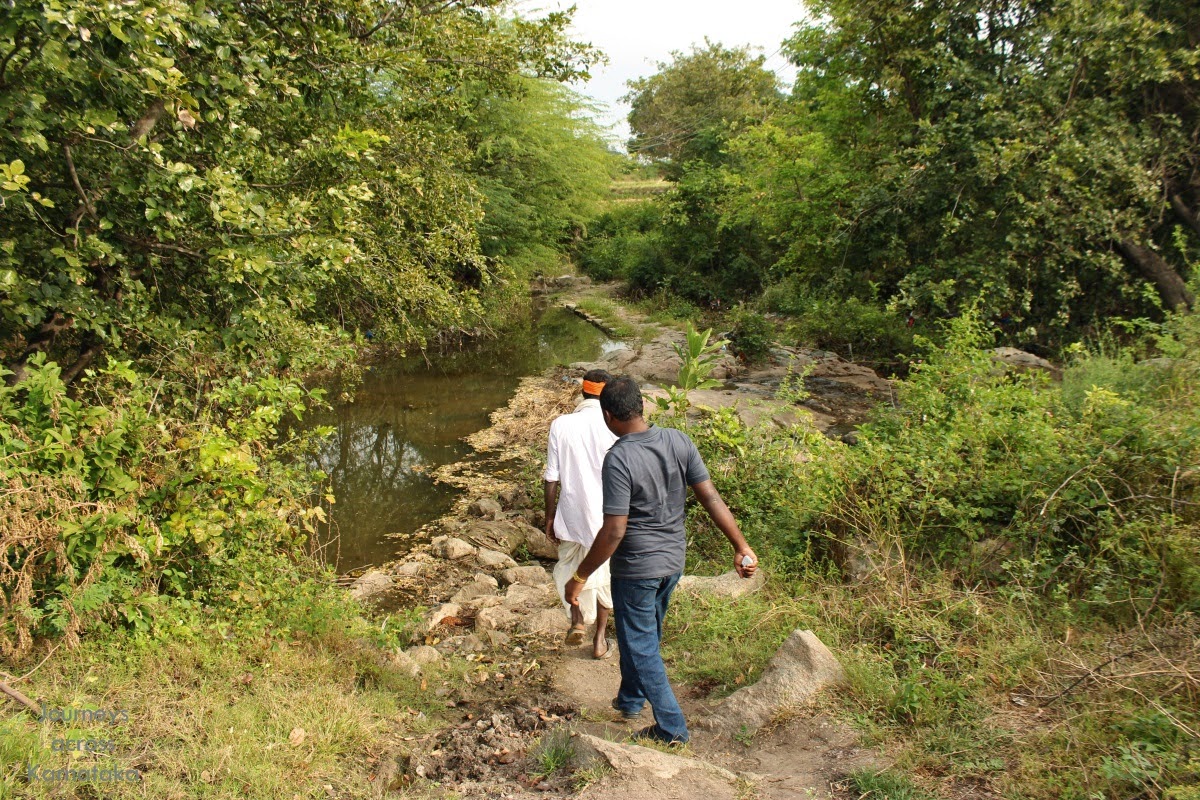 Close to the stream is a single floor building enclosing a well within its walls. Around the perimeter is a long hall which could be used for performing rituals or to beat summer heat. 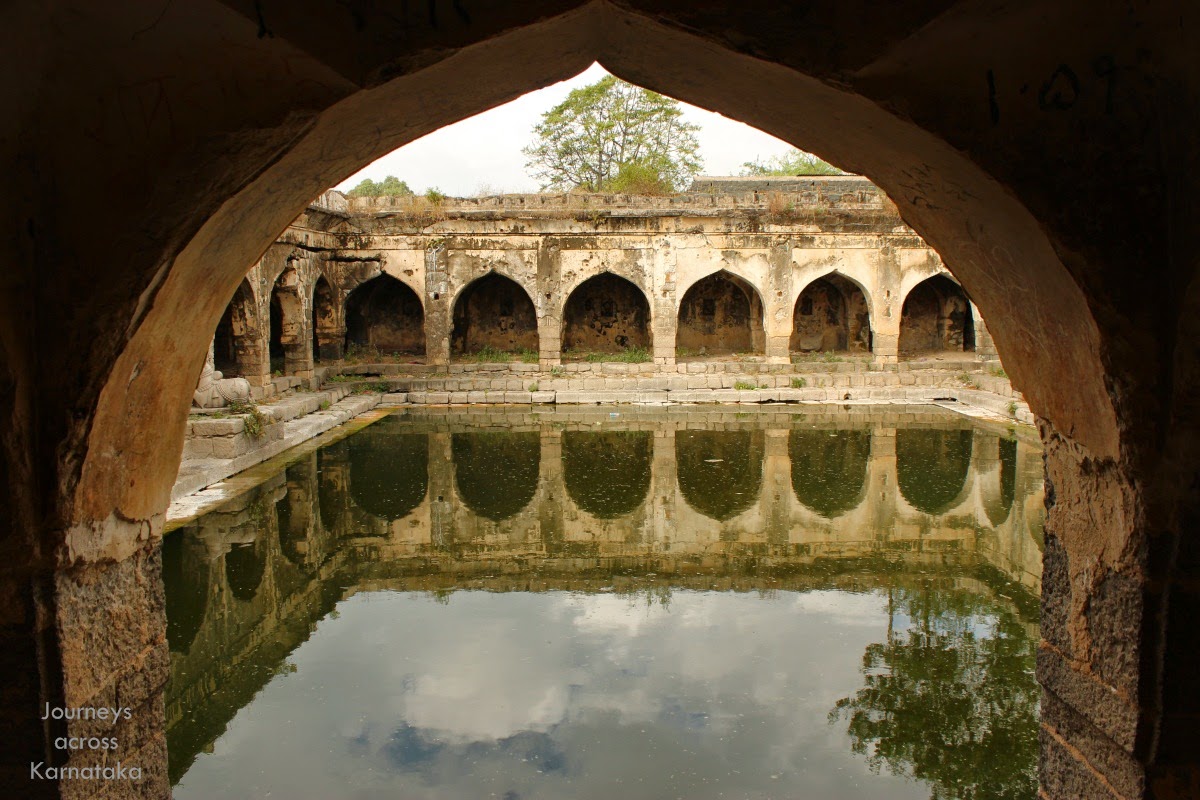 Architecture is similar to structures in Bijapur, Gulbarga, Bidar or Golconda. I wonder if this originally was a place of worship later converted by Muslim rulers into a summer retreat. 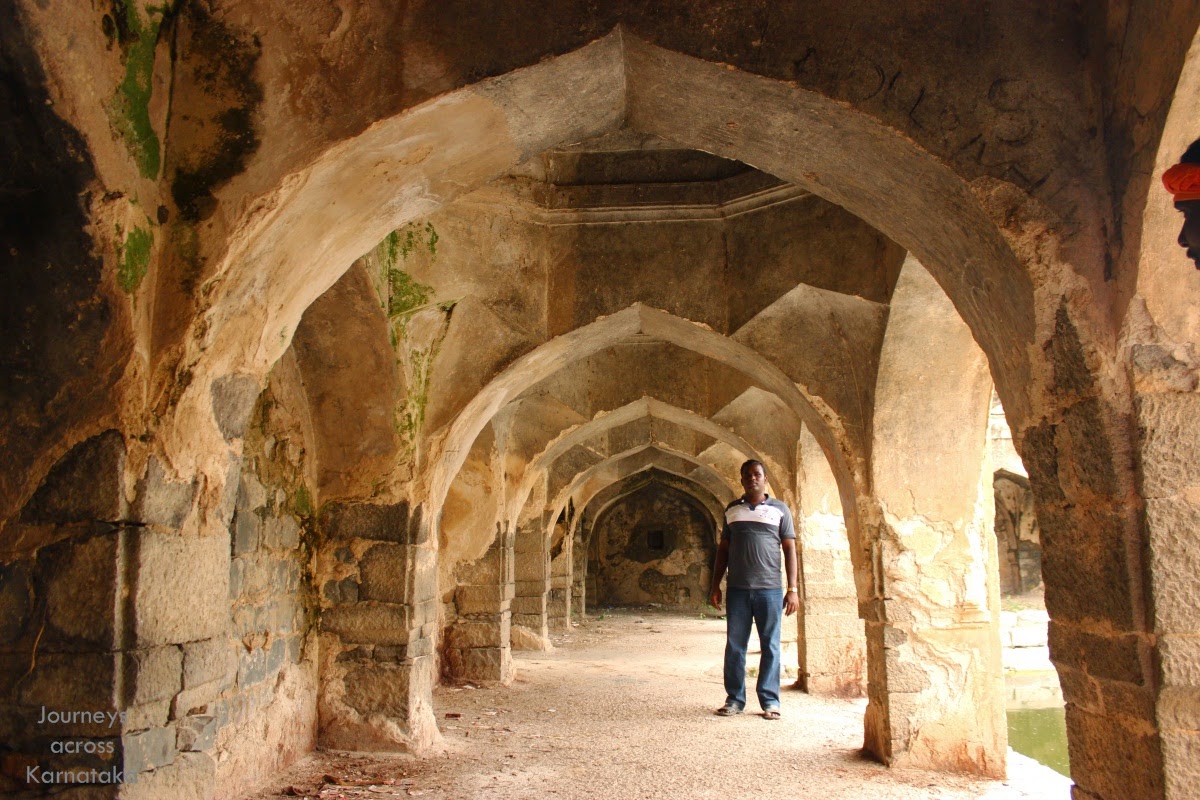 I had noticed something.. weather is much cooler. I felt Gurmitkal area was 5 degrees cooler than Yadgir. Also noticed the water levels in wells are high, presence of water could be a reason for cooler weather. 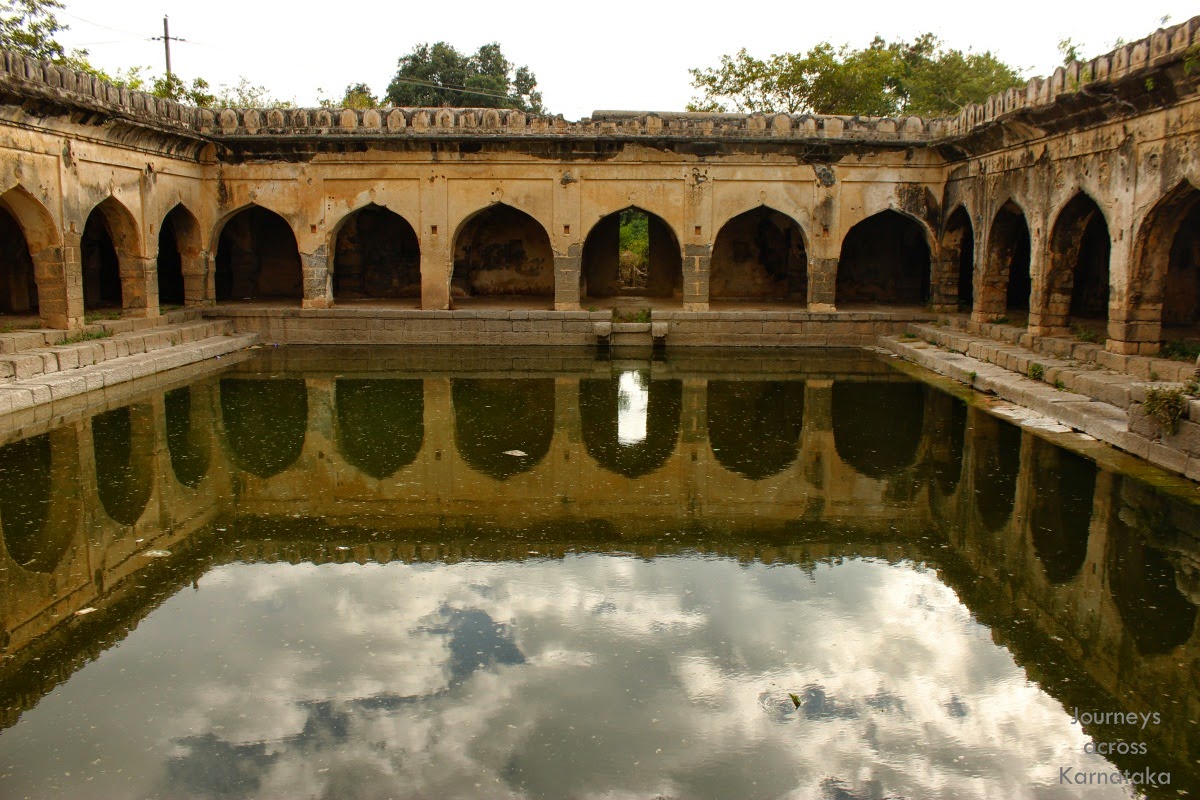 That's Harish. The other person, not in sight is his close relative. Harish and his Mama ~ maternal uncle conversed in Telugu. I think Mama did not speak Kannada. This well is surrounded by paddy fields. 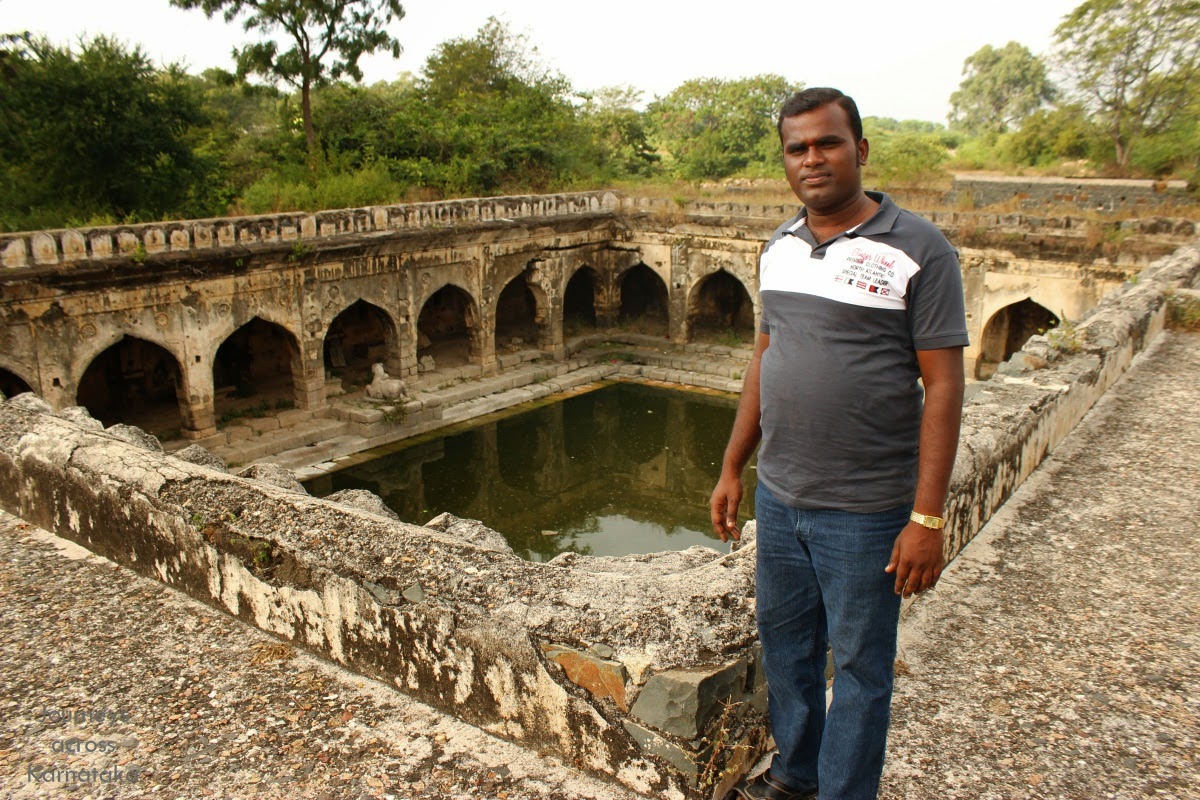 We walk back to the town. Harish insisted on introducing his family friend, Papanna Alegar. Together they wanted to show me few other spots of historical importance like the seven wells of Gurmitkal and a cannon. I told them about my plans to visit Chandriki fort, they knew and agreed to accompany me to Chandriki. As we drove through the town we first stopped at Nijasharana Ambigara Choudayya Vrutta ~ a junction named after a XII century Lingayath named Choudayya, a contemporary of Basaveshwara. At the memorial is a canon found at Gurmitkal fort. 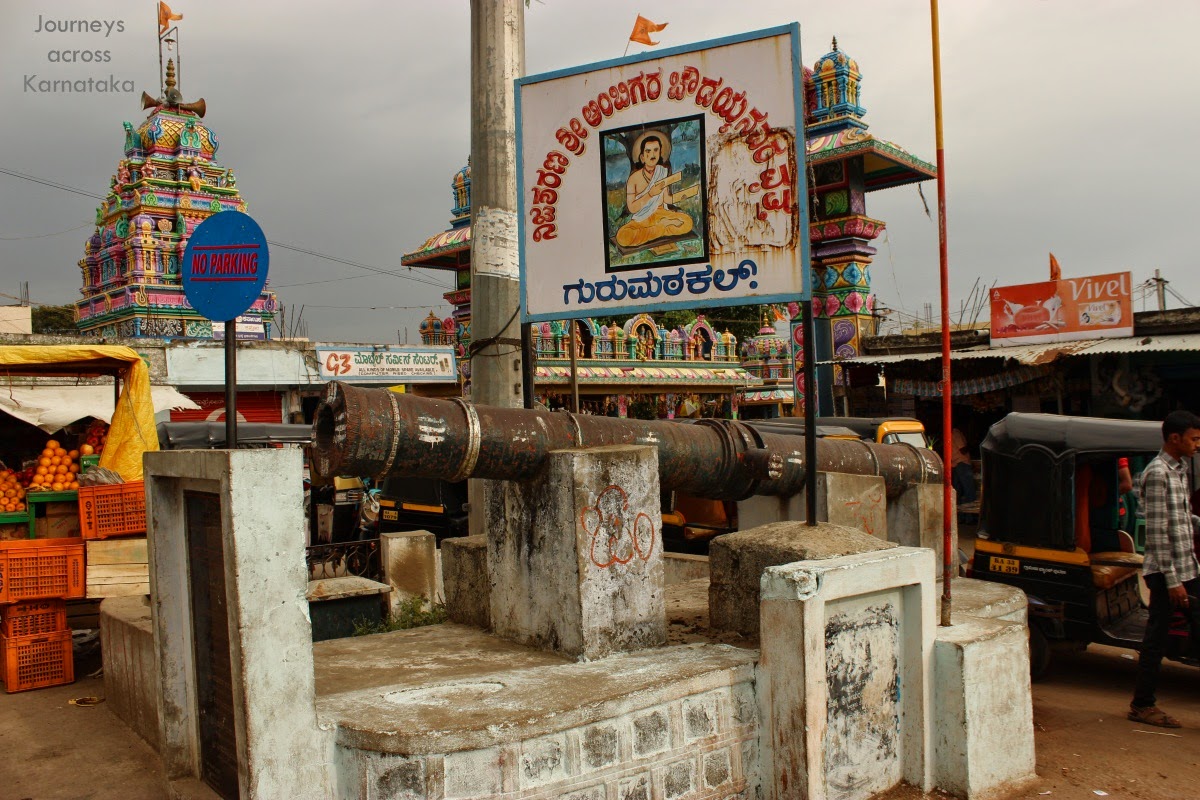 According to Papanna, Gurmitkal was part of Raja Lakshmanappa's kingdom which comprised of 184 villages. The king ruled from Kakalwar, about 6 kms northwest of Gurmitkal. It is said that Raja Lakshmanappa ruled independently, he did not pay taxes Nizam. The king had six brothers and one sister. Gurmitkal town has seven wells, one for each of the brothers and a temple dedicate to the sister Yellamma. This is one of the wells- notice how high the water level is. 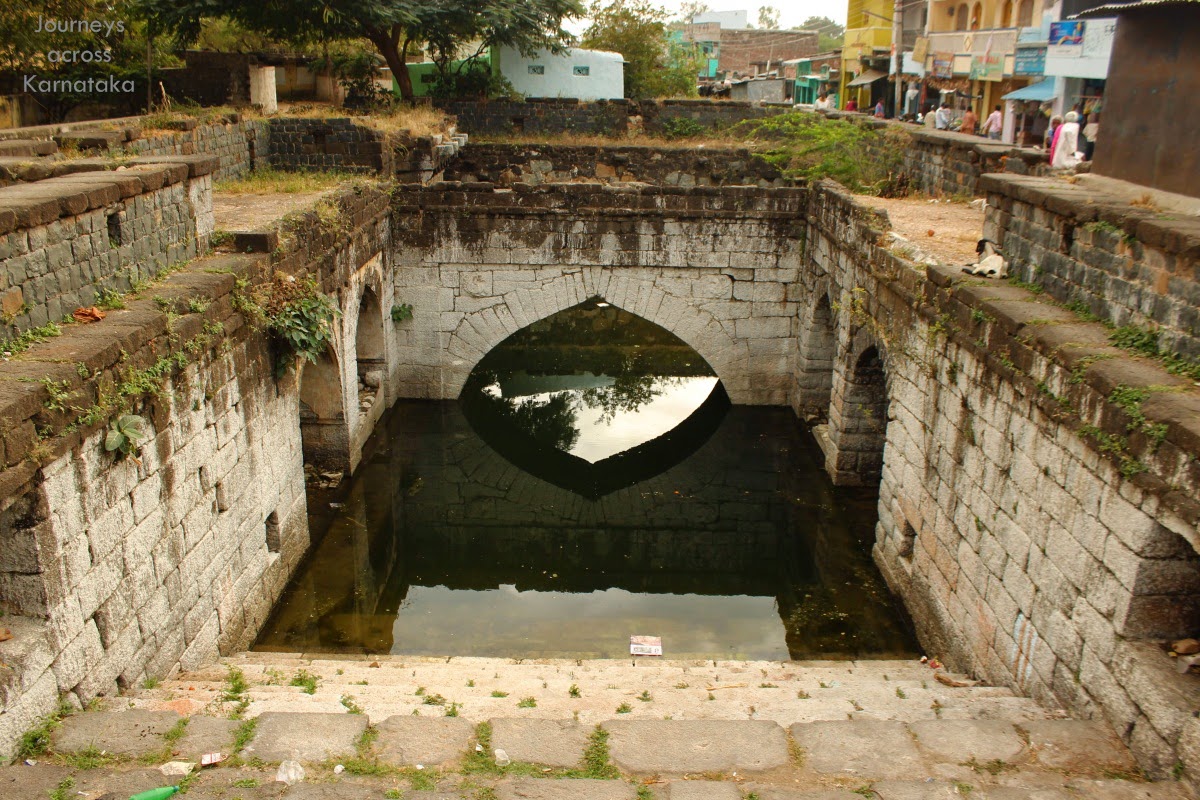 Close to the well are columns sans arches. This was one of the gateways on the outer wall of Gurmitkal fort. 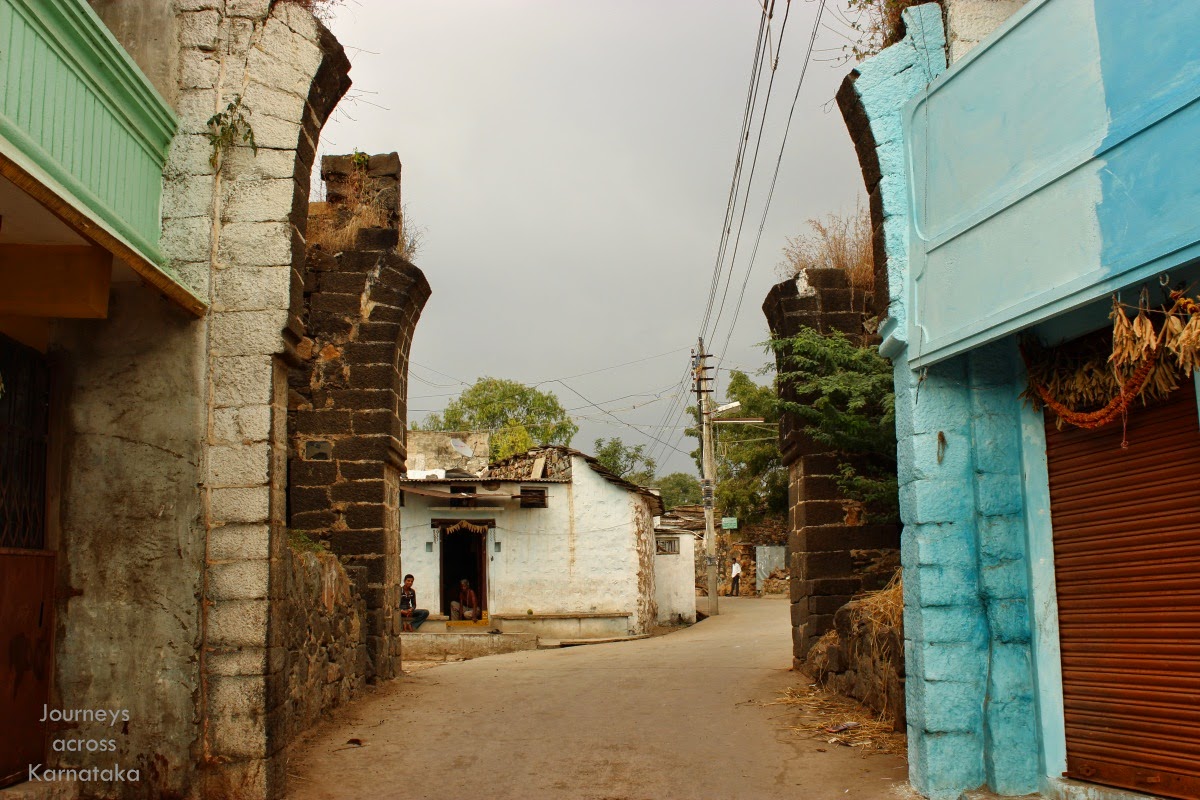 Harish told me about another popular spot close by- a waterfall. Mama called it Dabdaba. They insisted on driving down to the waterfall. Since time was a constraint, I chose Chandriki fort, about 6 kms away.

I'd never imaged this place would be hilly, have flowing streams in November, have such cool weather, and waterfall to top it all. I fell in love with Gurmitkal. I want to come back here, stay a day or two, visit Kakalwar and explore the surrounding area.

Thanks to Papanna Alegar and Harish.

It is a place I am looking forward to visit. Thanks for all the information.

Rajesh, you are welcome.

Channareddy, please point out the errors and also share the correct information. I''ll gladly make corrections to the post. Noted your mobile number, will call you soon. Thank you.

I love my gurmitkal city becauce its my love in that if any baoby is helping in my work iam greatfull to him.

I am great great grandson of Mallabhupal Deshmukh..

I AM FROM GURMITKAL MY HOMETOWN READ THIS POST NICELY PRESENTED THANKS TO PERSON WROTE THIS.MY SELF NARSINGRAO.K.POL.mobile+919766645894.

Hi
I'm from thane Maharashtra , we have done lot forts in Maharashtra and would like to venture into karnataka now ..have been reading your blogs bn forts ..can you share us with list of all forts in Karnataka with details of village , district etc..if you are kind enough to share.

Vijay, please check out the district-wise posts by clicking "Districts of Karnataka" on the right hand side. Hoping those articles help.