Gurmitkal and Chandriki forts were discovered while exploring Yadgir district on Wikimpia. Both names are unique, very different from all known place names.

November 28, 2013
About couple of hours ago at Gurmitkal fort I met two locals- Harish and his uncle. They were friendly and knew some history of their place. Its because of them I got to see few spots in Gurmitkal which would have been missed otherwise. They along with another friend, Papanna Alegar agreed to accompany me to Chandriki. Just outside Gurmitkal is a Lingayath monastery called Khasa Matha. Papanna Alegar said we'll stop there but I insisted we see the fort first.

Between Gurmitkal and Chandriki there was a light shower, it ended as abruptly as it started. The road went up and down graceful slopes and soon we entered Chandriki village. The lanes were really tight, we could drive till a school. The fort was a short walk from there. Again we were walking through paddy fields, harvesting was over few weeks back. As the fort came into view, it was another surprise - another mud wall fort. Looks like forts in this region are of this design. 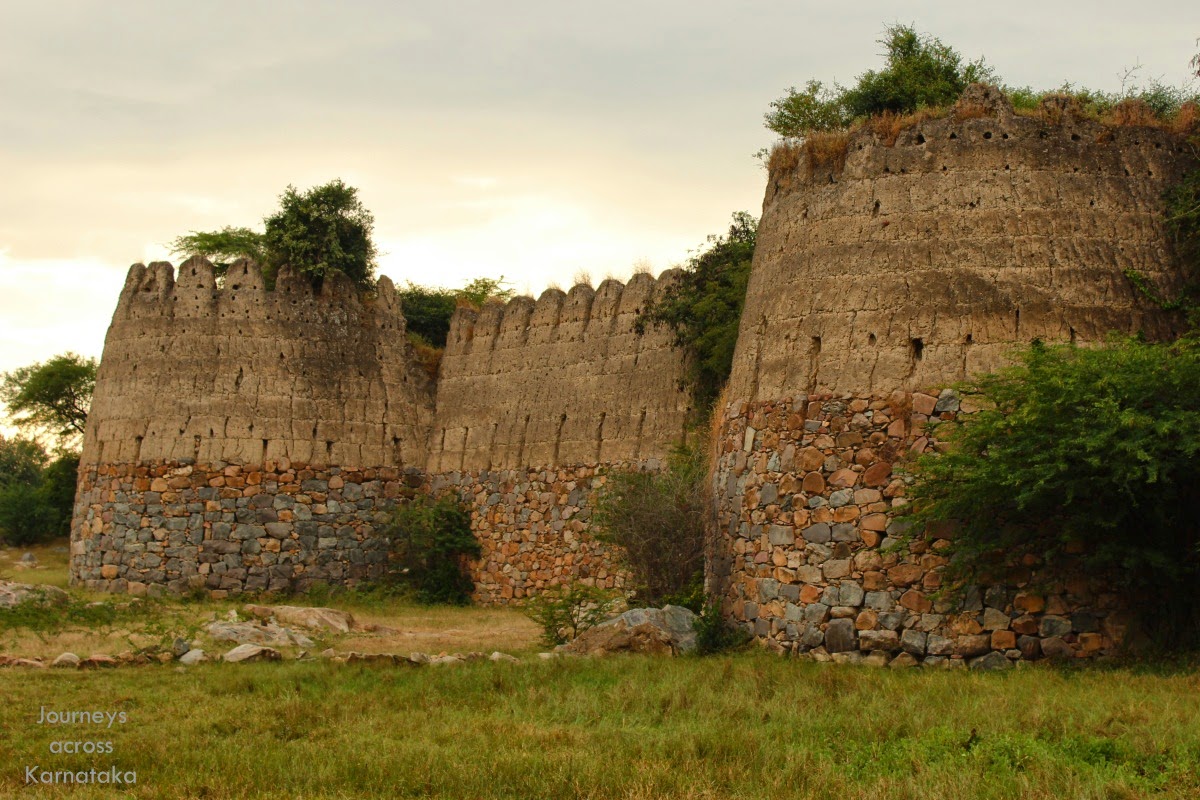 Chandriki fort covers a larger area than Gurmitkal fort, probably double the size. This fort might have a dozen bastions. Very close to the fort is a small lake. 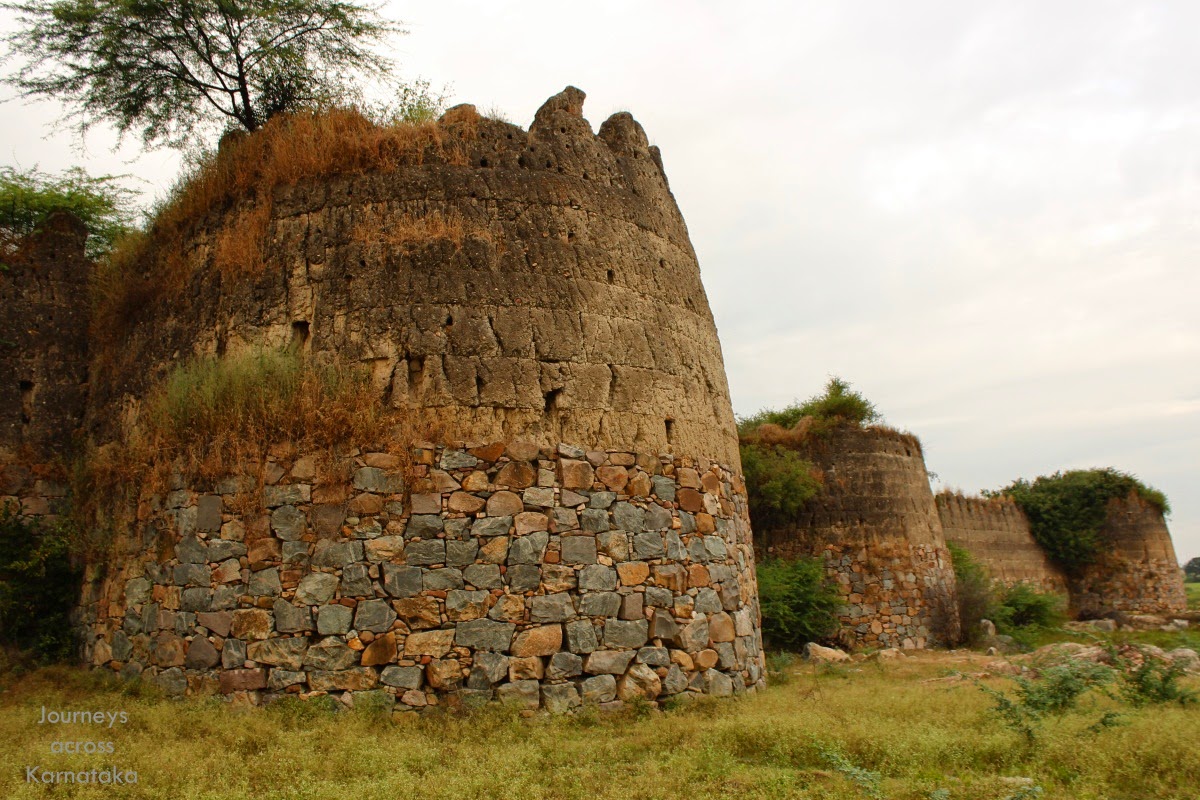 A small gateway in the southern wall. We could enter from here because of thorny bushes. 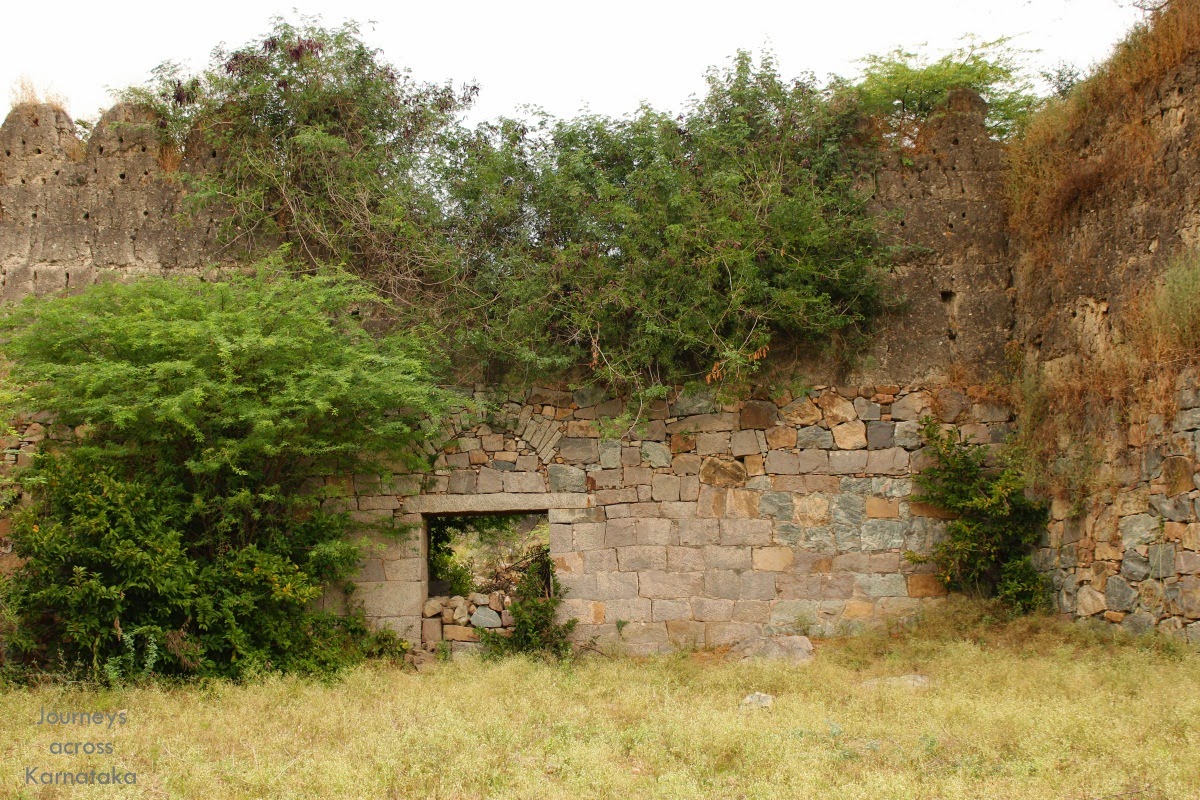 According to Papanna, Chandriki belonged to Raja Lakshmanappa's kingdom which comprised of 184 villages. The Raja ruled from Kakalwar, about 6 kms northwest of Gurmitkal. It is said that Raja Lakshmanappa ruled independently, he did not pay taxes to Nizam.

That's our gang- a local boy, Mama, Papanna Alegar and Harish. In the background is the fort entrance. To enter the fort one has to take a curved path, a security measure to slow down enemies in case of a frontal attack. 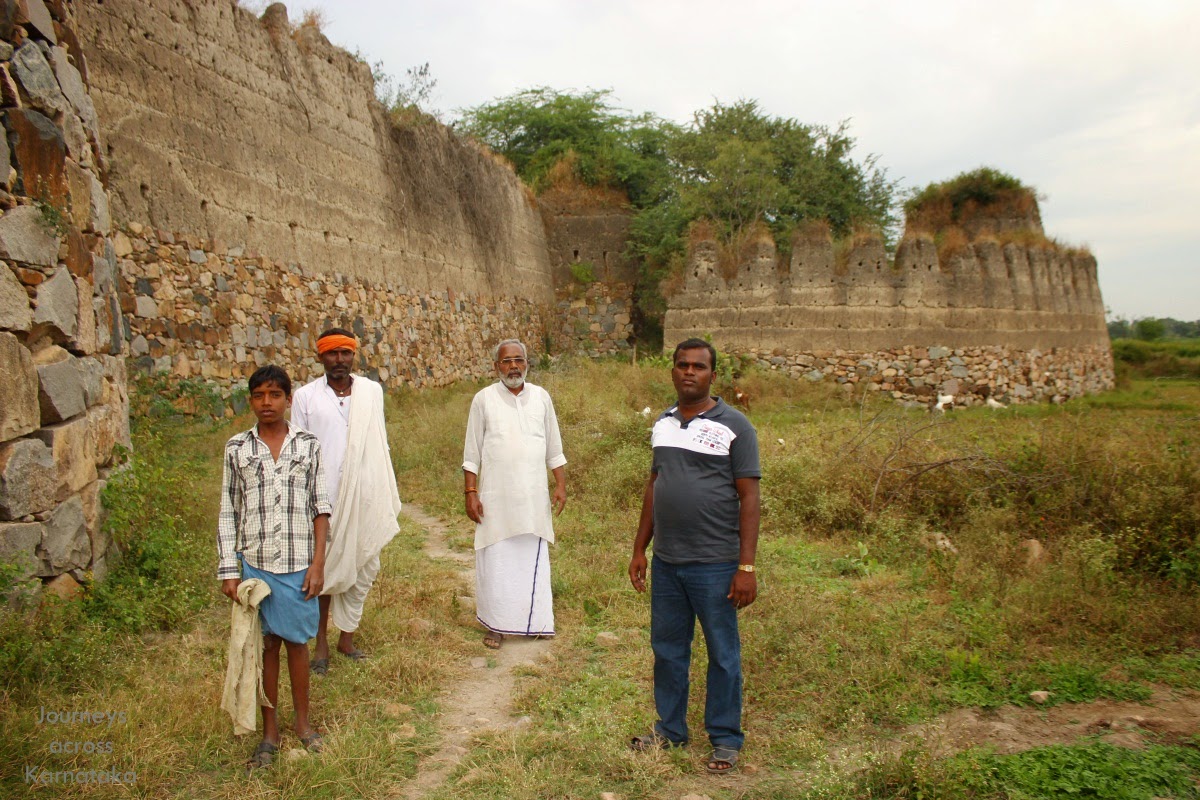 This isn't the actual entrance. The wall on our right (a semi-circle in plan)is the there to conceal the fort's main entrance - perhaps, its ok to call it a curtain wall or a shield. The space enclosed between the fort and the shield is a place to trap enemy forces. 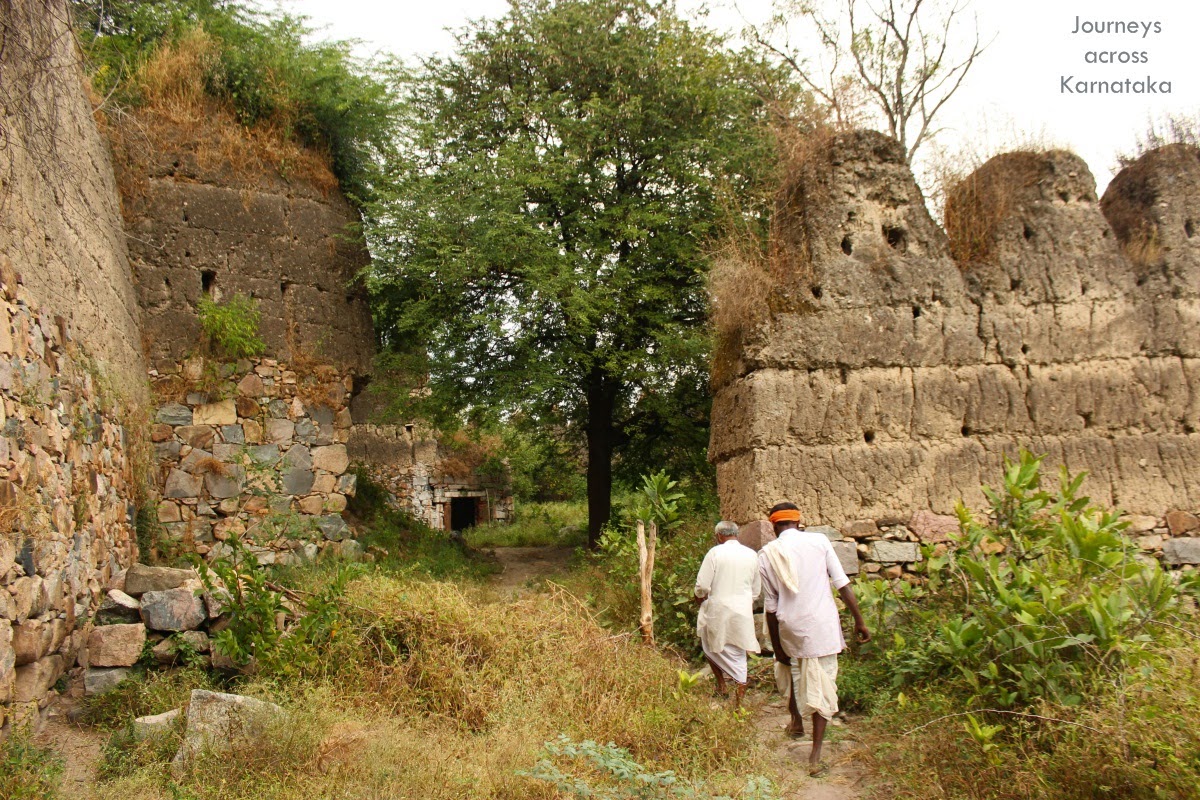 Different levels of the wall can be identified here- 6 levels are seen here. Builders have even made gun holes (see inset). 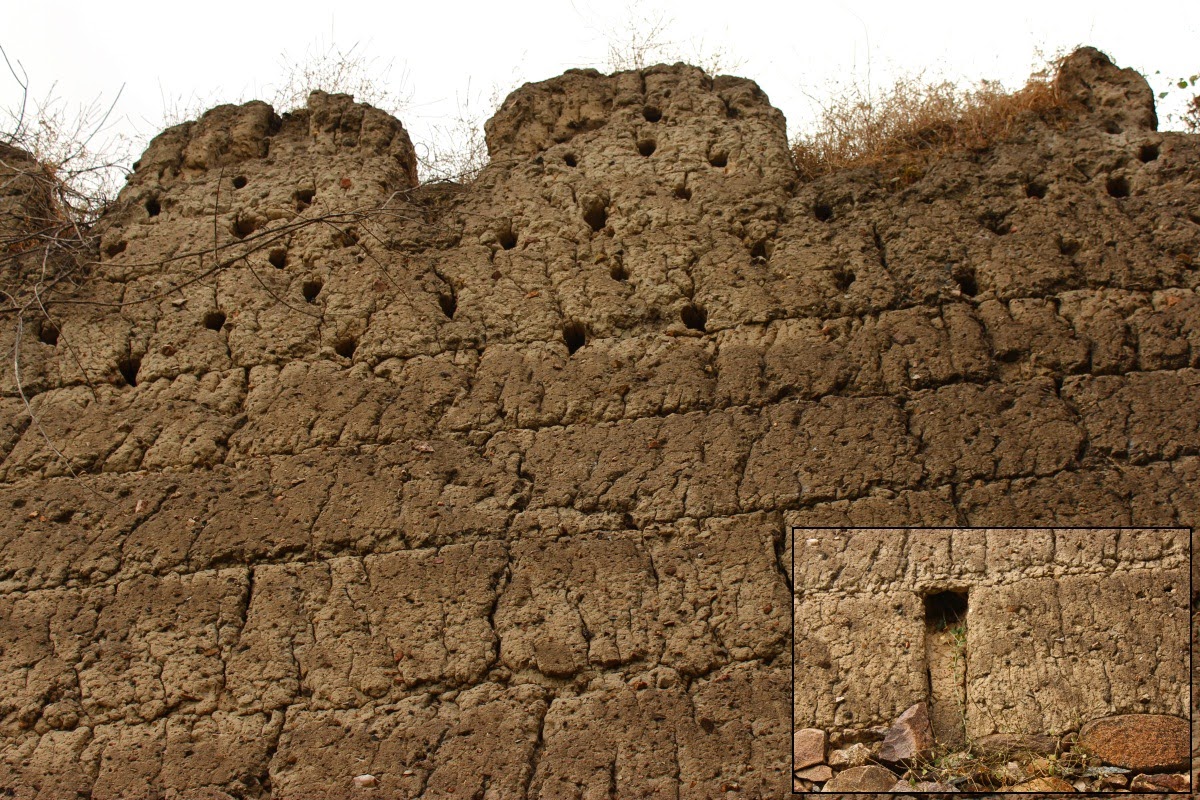 Close to the entrance is a small temple built into the rampart wall. I dont remember seeing any deity inside however close by was a little sculpture.. 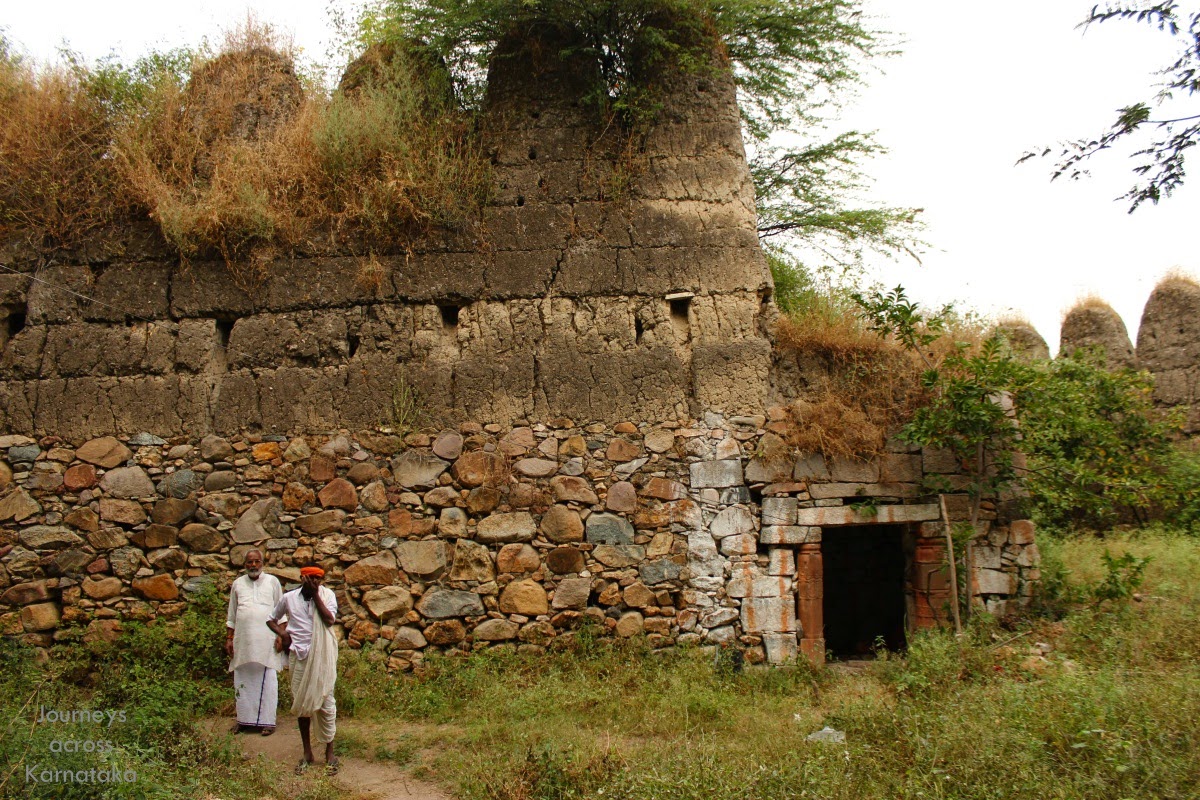 ..of Lord Hanuman. Looks more like a running baby Hanuman. 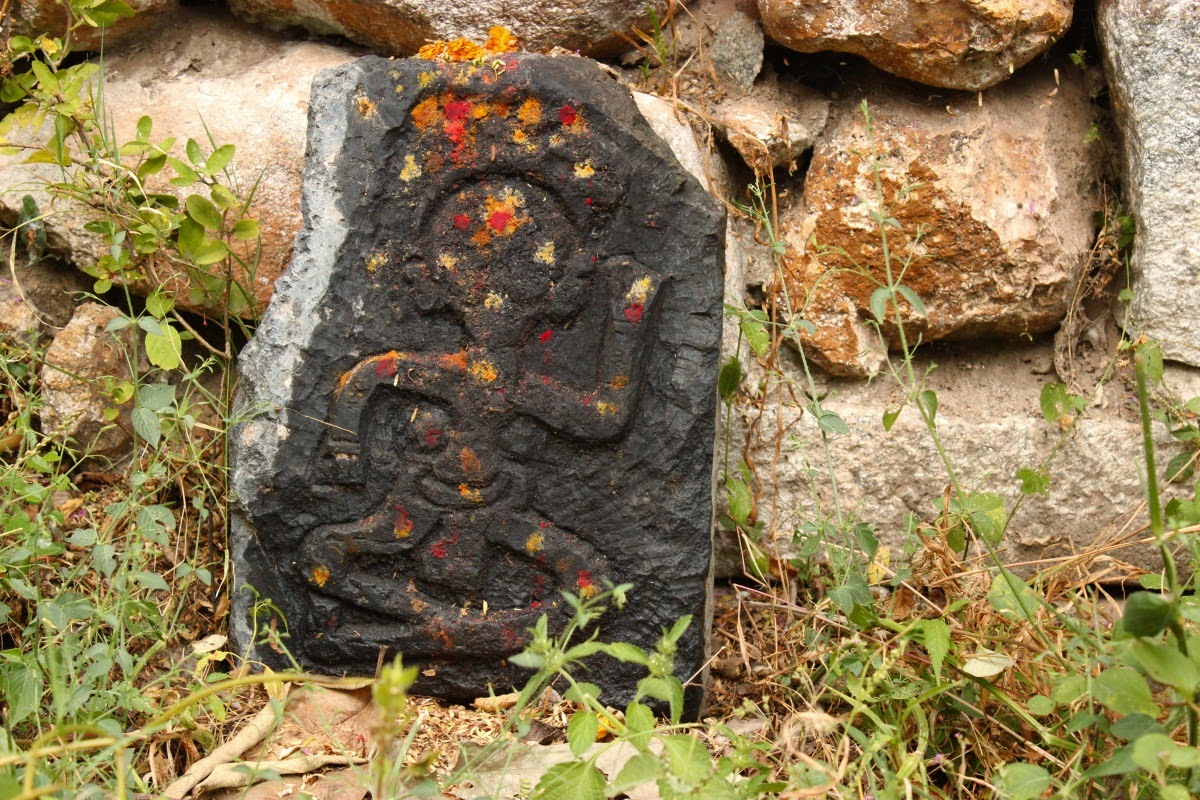 That's the main gate of Chandriki fort. Looks like even this fort was taken over by Nizam's forces. 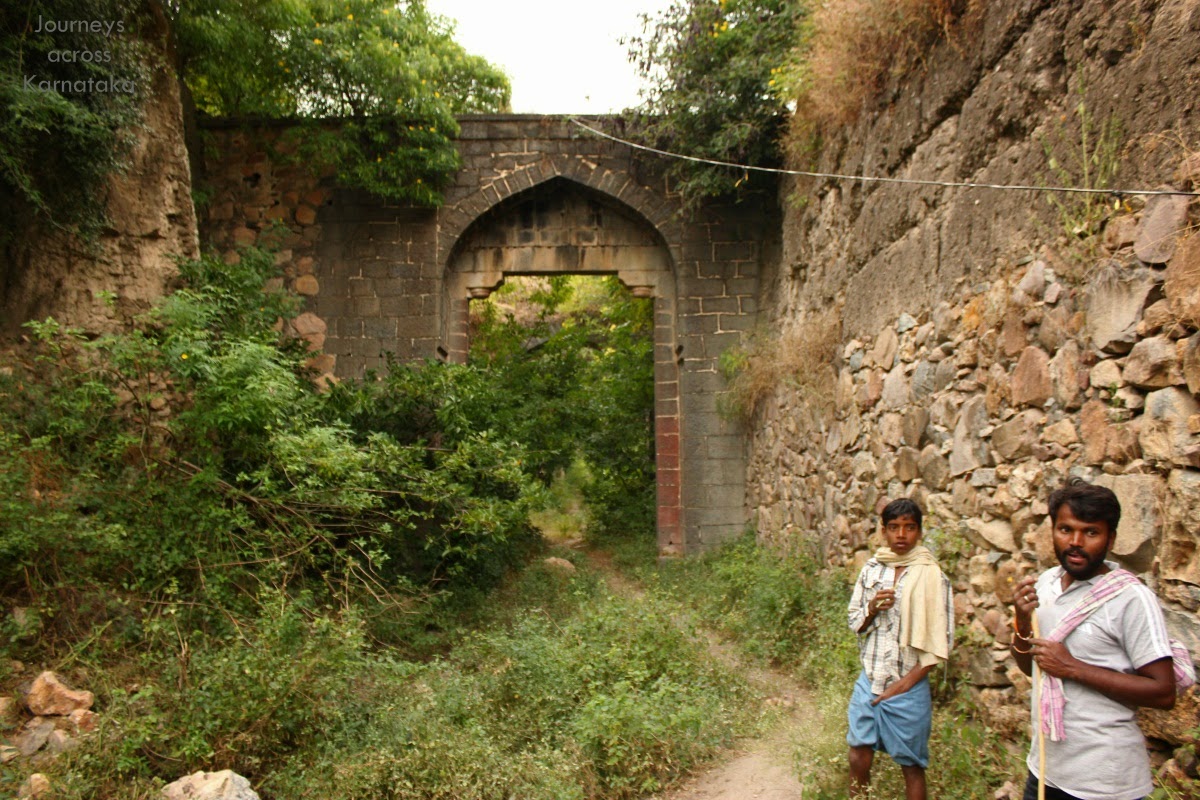 Within the fort is a stepped well, grand like other wells we saw in Gurmitkal. In fact we saw another well on the outskirts of Chandriki village. This particular well could be 400 years old. May God protect this region, may the water level remain this way always. 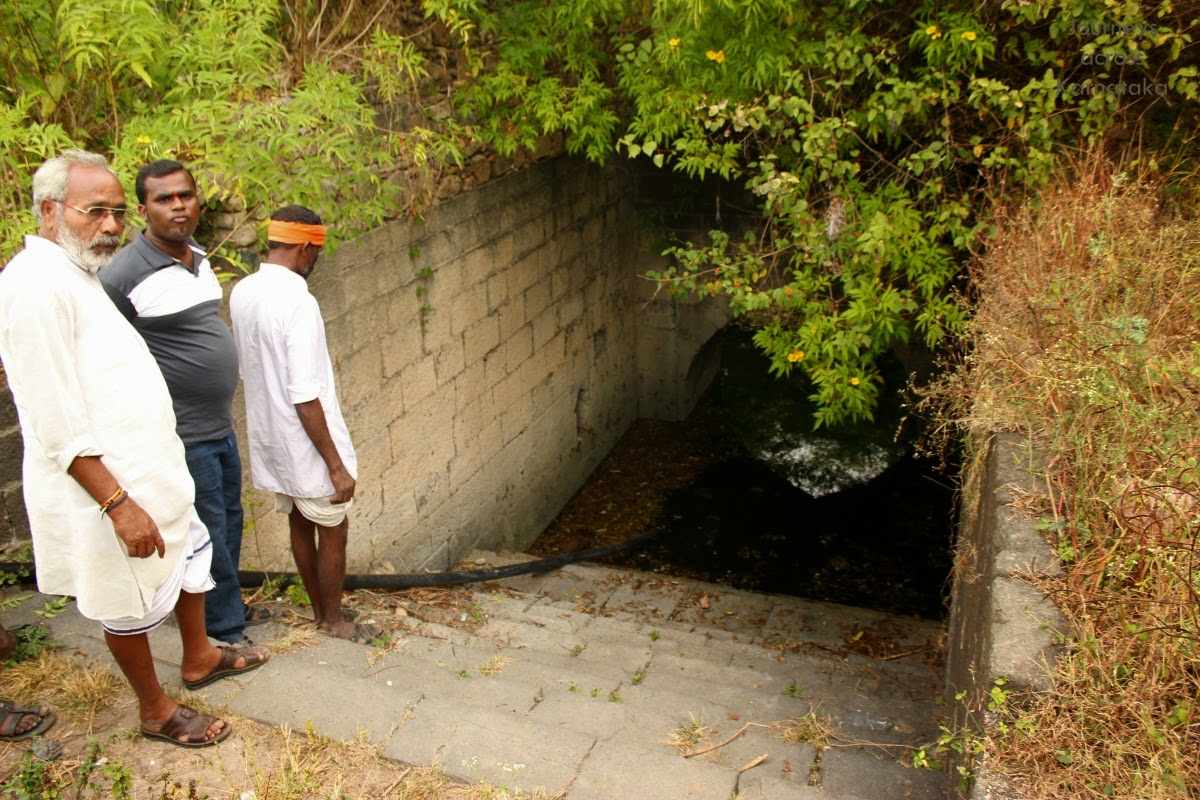 So much of planning and work have been done for water - and they have survived until now. 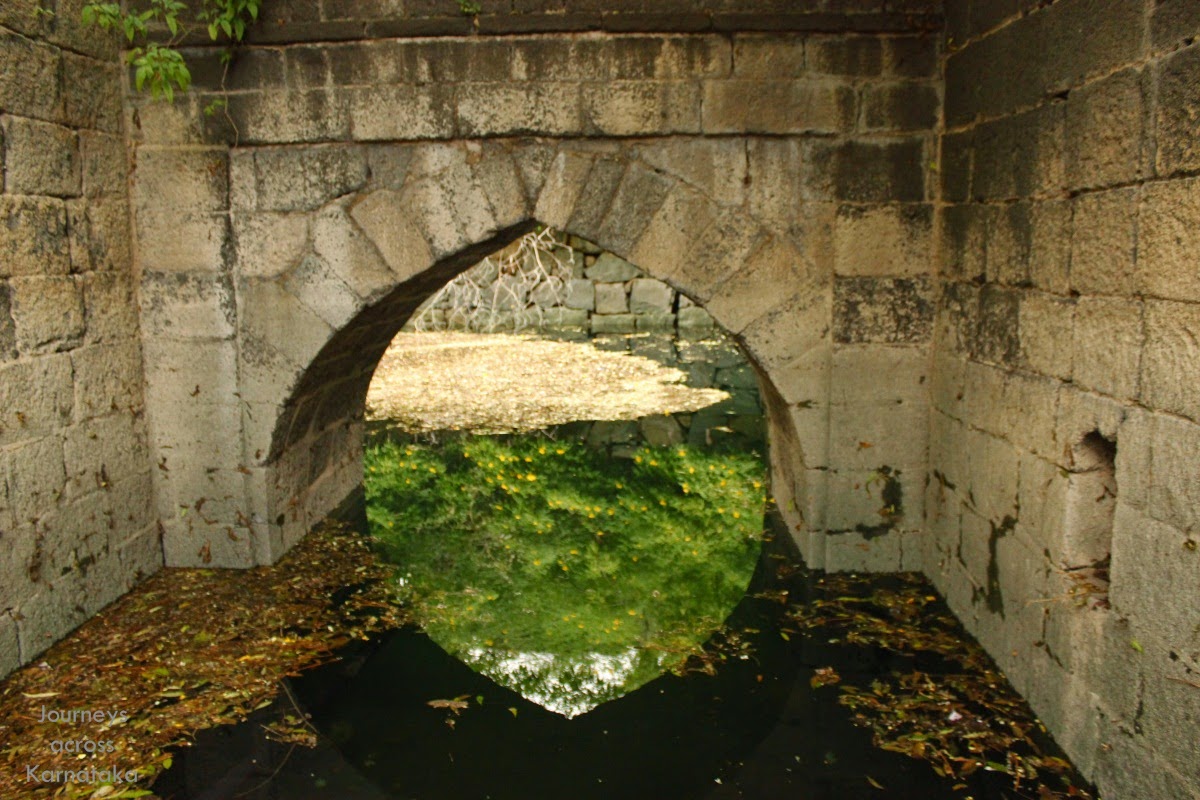 A mantap or a royal shelter. Over the well's water was a weaver bird nest (see inset). 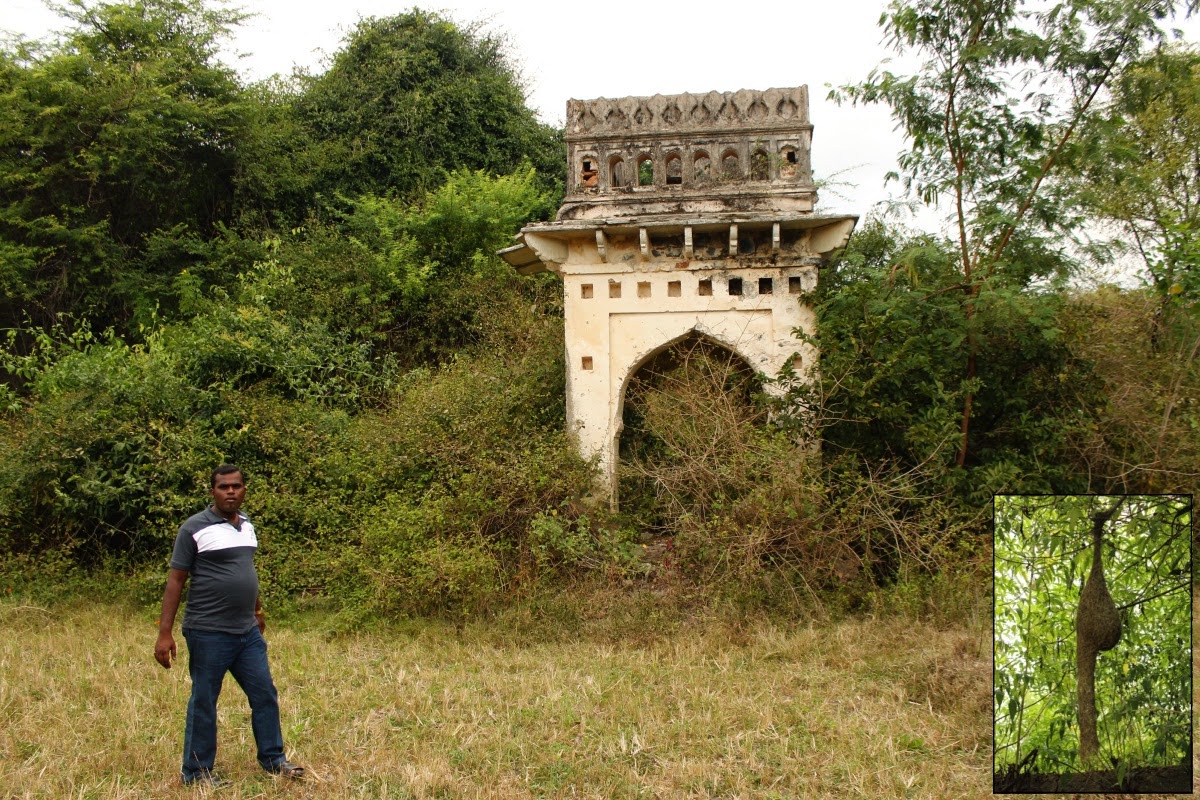 We make our way to the fort's temple, its a big temple. The temples are high and have a fort like quality. This was no ordinary temple, looks like treasure was stored here for safe-keeping. This is the main entrance with a big arch. 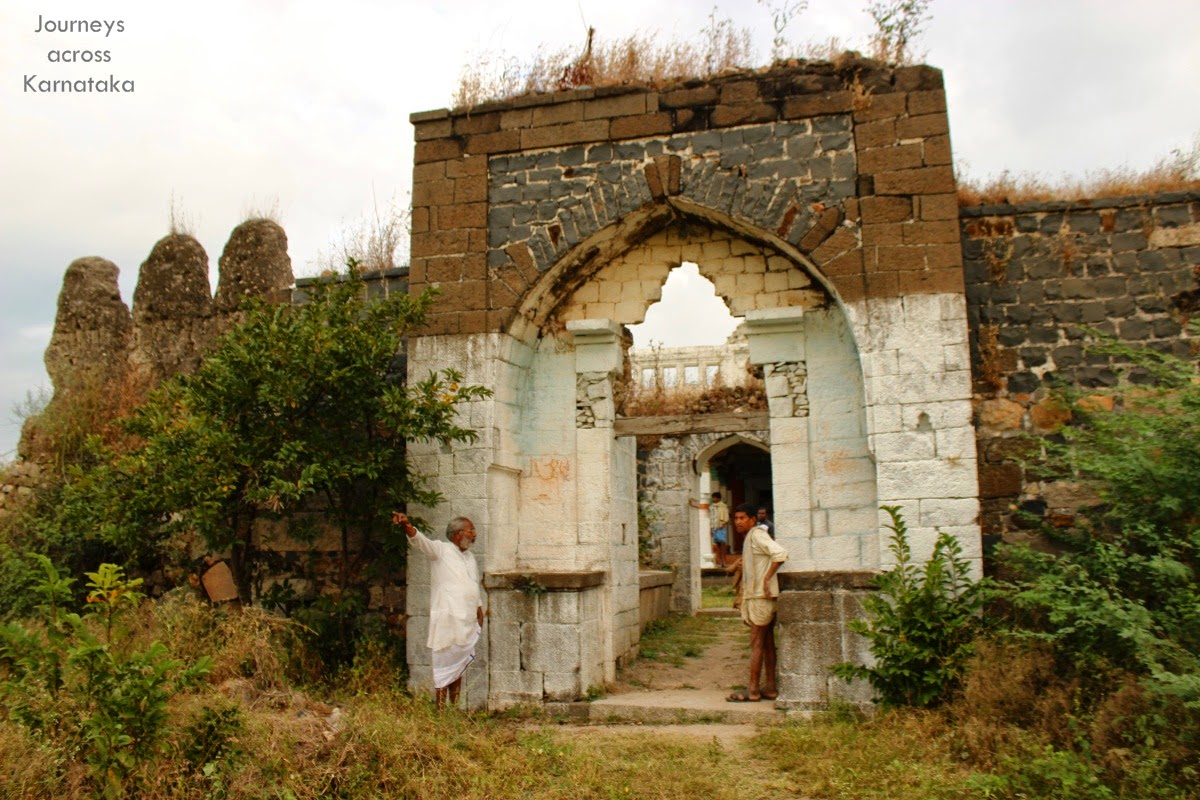 The second gateway with a smaller arch. 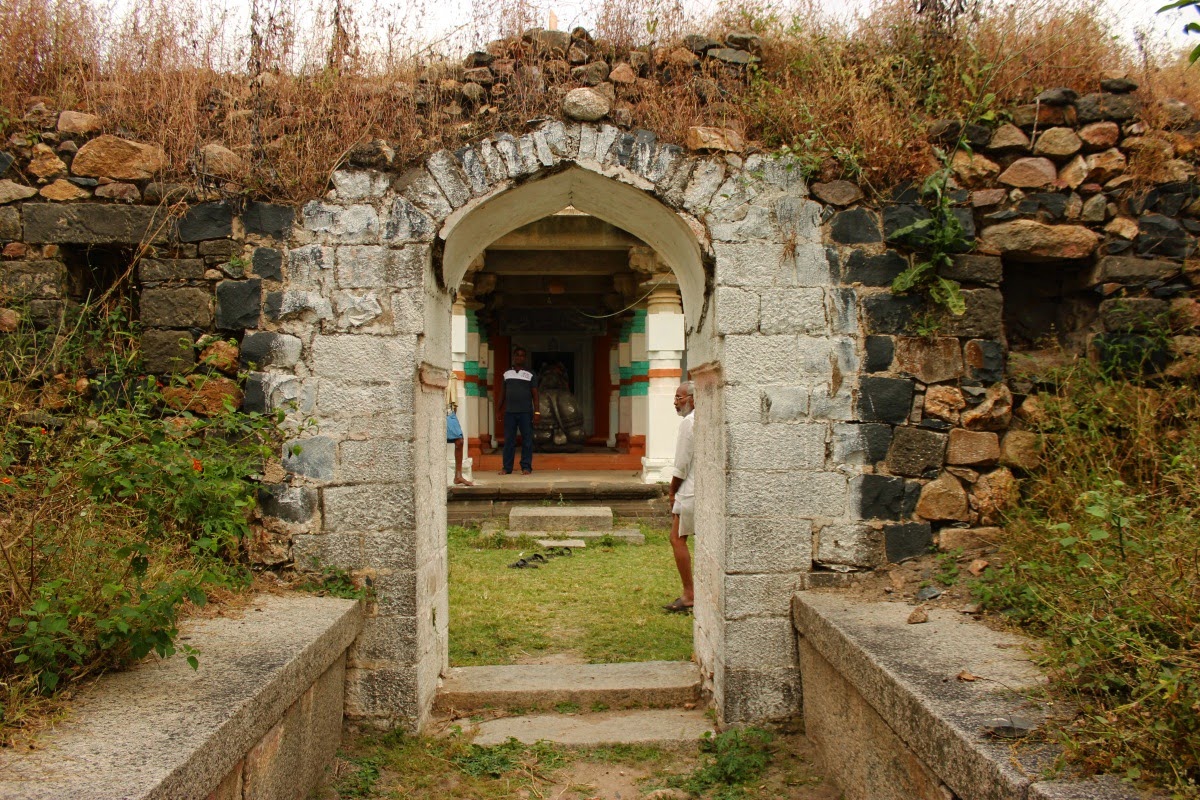 The temple's mukhamantapa ~ verandah. Notice the detailed panel above the lintel. 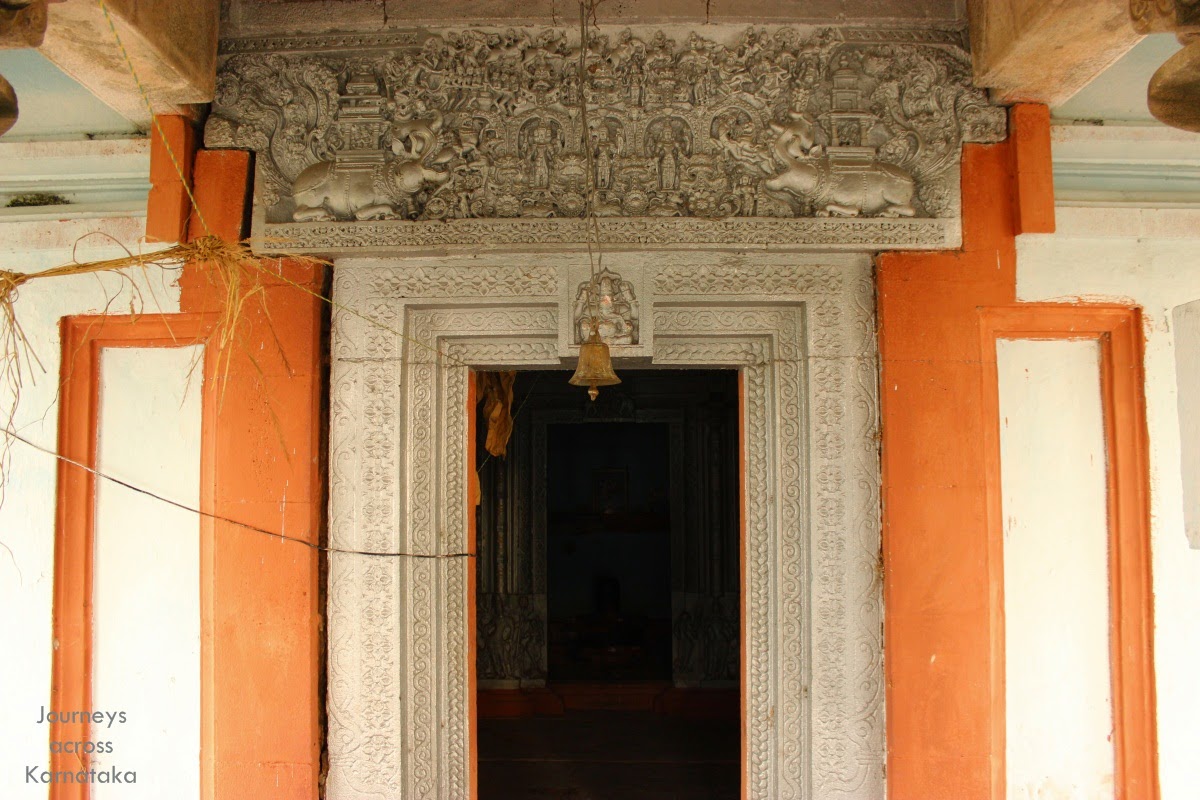 In the Garbhagudi was this simple looking Shivalinga, lit by setting sunlight. Normally you see east facing temples but here at Chandriki we have a west facing temple. One other such temple is at Siddanakolla near Badami. 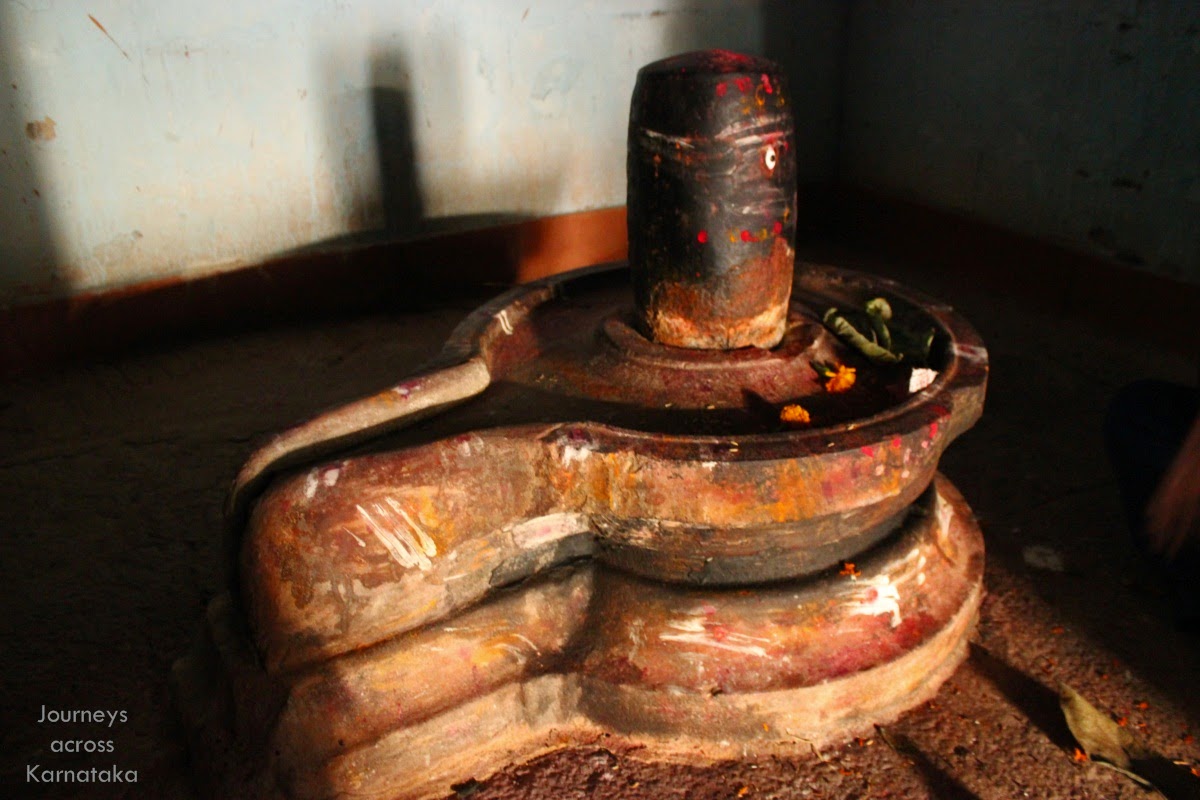 A large Basavanna in the Mukhamantapa. Within the temple walls was a pair of oxen taking a break after a day's work, they were feeding on hay. Those ox were just like the Basavanna here. 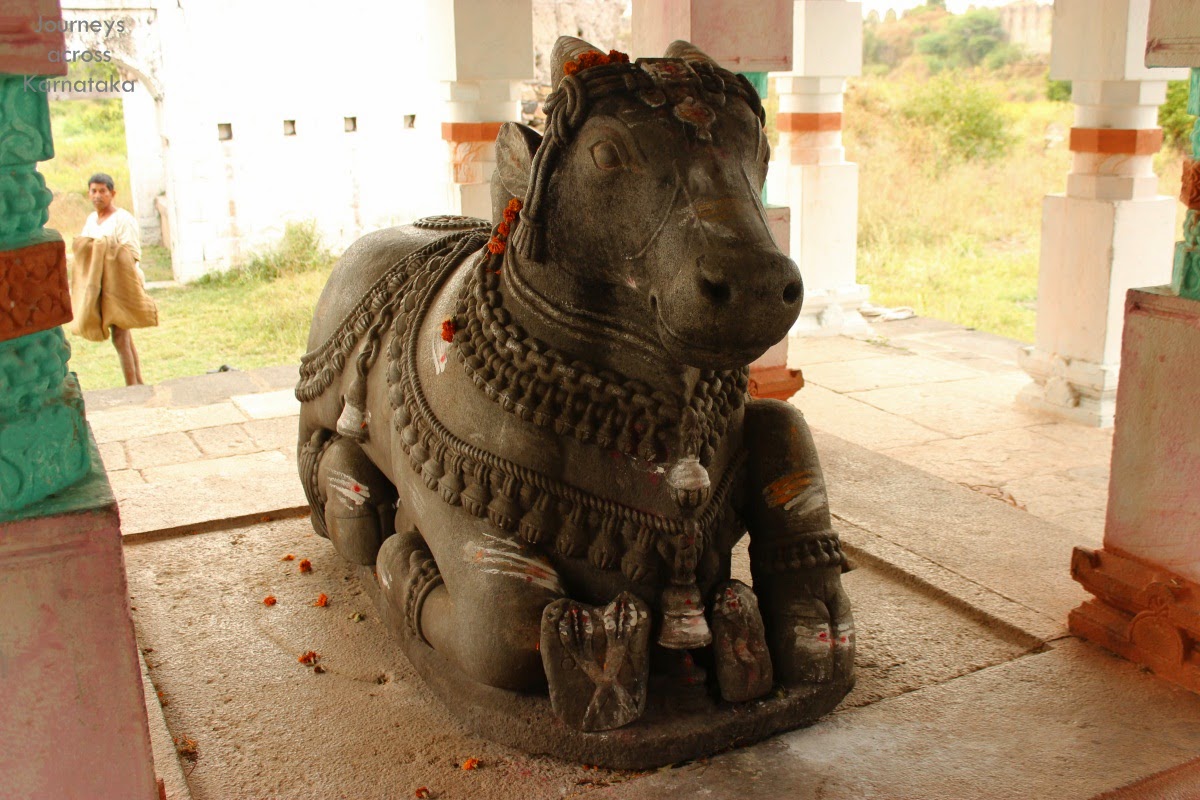 Isn't the stone ox similar to the flesh and blood ox, especially the head? 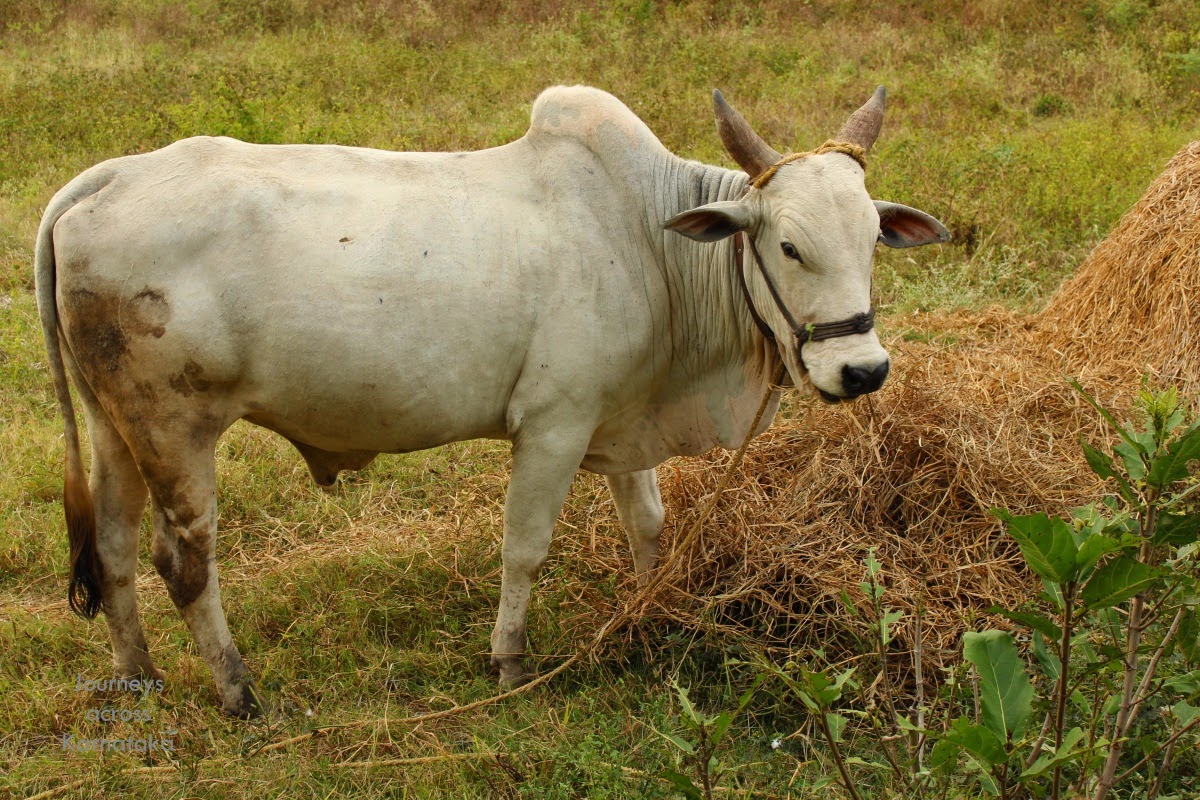 Again nothing much remains within the fort. With light fading we decided to leave. Back at the fort's entrance.I wonder if earth for constructing these walls was sourced locally. 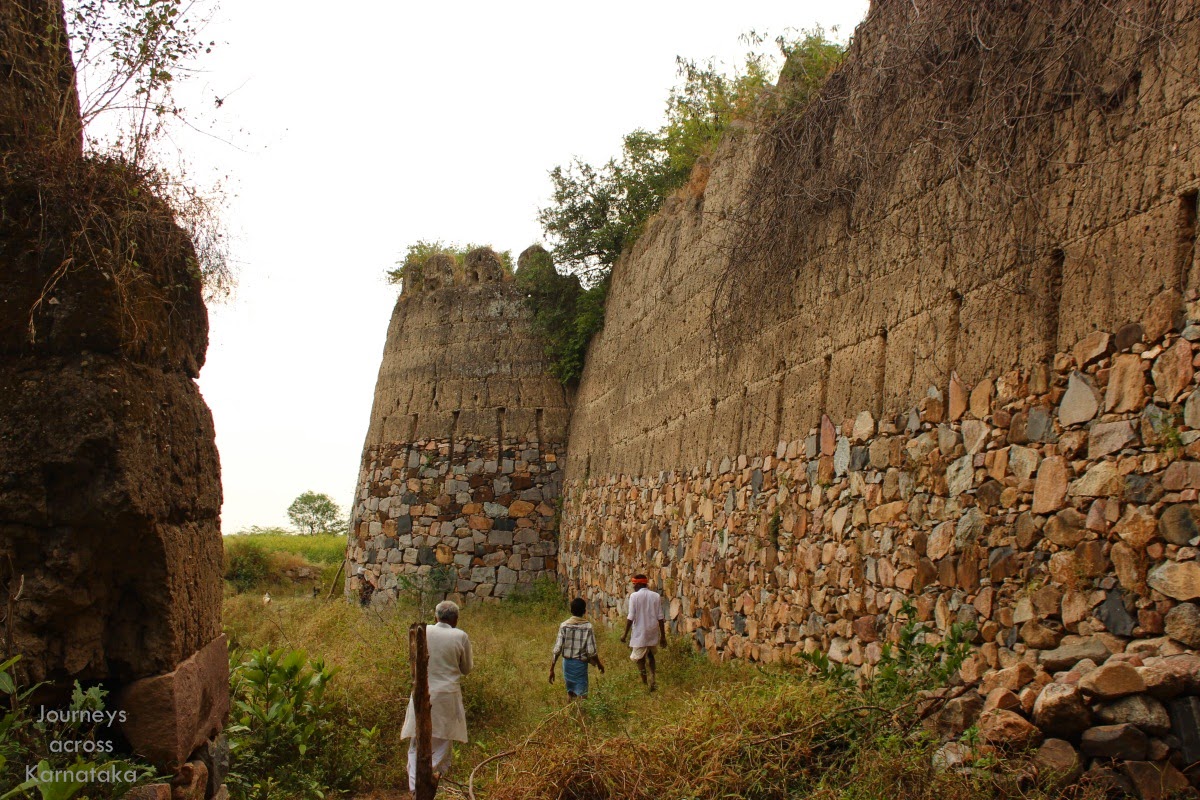 Nearby in the field was a half buried ancient sculpture. 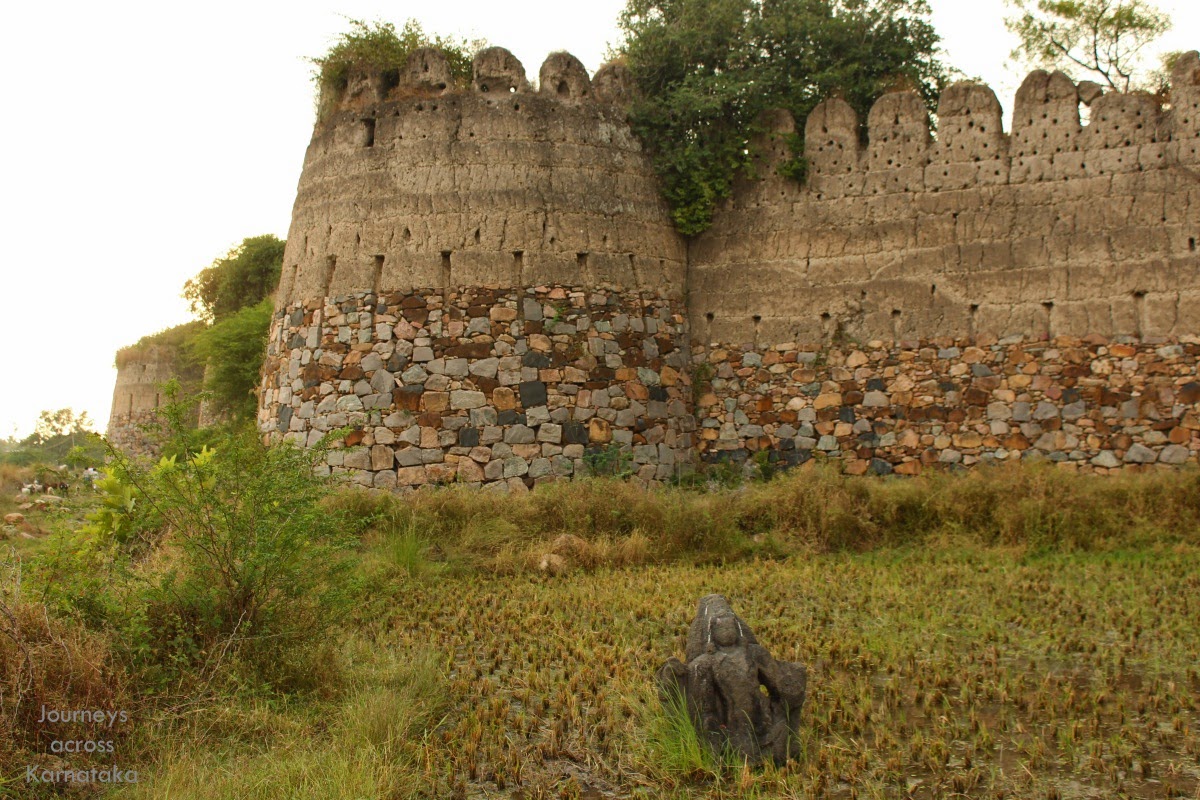 Back to the cab, we drove towards Gurmitkal. Papanna Alegar insusted we stop at Khasa Matha and meet Swamiji. Yes, Sir.

A week later when I was back home Papanna Alegar had called me to tell about the desecration of Shiva Linga at Chandriki fort. They said the miscreants had dug up the Garbhagudi floor in search of buried treasure and in the process Shiva Linga and its pedestal was disturbed and damaged. They said the news was reported in media and people were on looking out for those miscreants. This had to happen just after my visit! In their point of view- a stranger visited our temple and this happened. Is that stranger involved? Anyway, I'm in touch with my friends on phone and sent them pictures. I believe that incident has not colored my friends' minds.

Vithalrao kulkarni is the...owner of this fort. Tq for showing this all pic and about ur journey tq. frm:vithal Rao Chandriki.