Medak is known for its rice mills, a hill fort and the century old cathedral. The place was originally known by the name Siddapuram, when it came under Muslim rule it was called Gulshanabad, and then changed to Methukuseema and finally settled with the present day name Medak. The name Methukuseema can be split into Methuku + Seema which translates to Cooked Rice + Territory. This is interesting and it reminds of two other named connected to rice. Akkipete means rice market in Kannada, is actually a locality in Bengaluru. And then we have Honda which means ‘original rice paddy' in Japanese.

August 14, 2016
We left home early morning, our plan was to avoid city traffic and reach Medak while the weather was still cool. We had a short break just before entering Medak town. As we entered, a plan was formed.. first breakfast followed by a visit to Medak Cathedral and then explore the fort. Like most other forts I've been to, approaches to forts are usually through narrow streets and lanes, Medak was one of them. The road passed through tightly packed localities and the final half kilometer cement road snaked up the hill and ended close to Mubarak Mahal, the heritage hotel of Medak fort. Few steps climb we were at this entrance with Mubarak Mahal behind me. 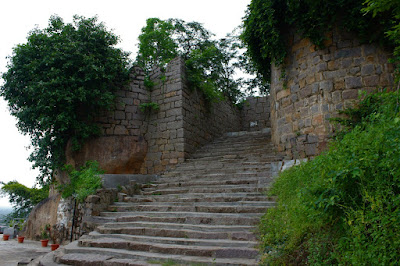 A small board at the entrance gives some information about this hill fort.
Medak fort is located in District Medak about 100 kms from the state capital, Hyderabad. Medak is located at 18.03 N 78.27 E. It has an average elevation of 442 meters (1450 feet). The fort lies to the north of the city and can be reached by road. It has a citadel built on the hillock that provided as a vantage point for the Kakatiya rulers in the ancient India. The fort was built around the 12th century CE and during the rule of Kakatiya ruler, Pratap Rudra I and the fort was called Methuku Durgam, meaning cooked rice in Telugu. It was a command outpost of the Kakatiyas, followed by Bahamanis and Qutb Shahis. The fort bears great historical and architectural importance. The place has witnessed battle scenes for almost five centuries. Within the fort is a XVII Century mosque built by the Qutb Shahis, granaries, remains of grand houses and Mubarak Mahal.

It has three main entrances, the "Prathama Dwaram", the "Simha Dwaram" that has two snarling lions at the top of teh entrance and the "Gaja Dwaram" or elephant entrance that has a sculpture of two elephants interlocked on both sides of the entrance. The main entrance proudly displays the double-headed "Gandabherundam" of the Kaktiyas. The wood used as a support of the stable roof (Terminalia Paniculata) can still be seen there.

At the fort one can see a XVII Century cannon that is 3.2 meters long. The cannon has a trident etched on it. This fortress uses natural topography to the maximum advantage with the rocky face offering it natural defenses. Water to the fort was provided via a pipeline.

Now, there is not much left to see, but as it stands on a hillock, it offers a good view of the district. One can see various structures, gates built at strategic points.

Now the Mubarak Mahal after conservation is converted into a heritage hotel maintained by APTDC.

From the vehicle parking spot, we could see this Gumbaz. This is Dargah Hazrat Shaik Siraj Uddin Junaidi. Its a fairly well maintained structure. On its front yard are several graves. 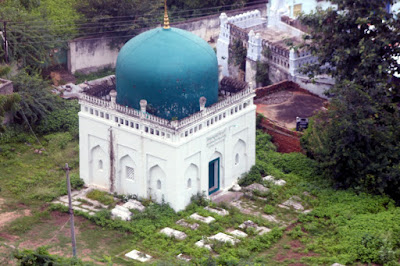 We start our exploration by first checking out the gateway behind Mubarak Mahal. The architecture is Islamic. This is relatively recent construction or the existing structure was modified. 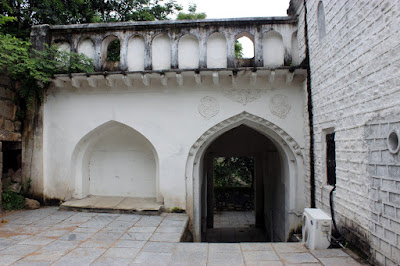 Gateway as seen from the other side. 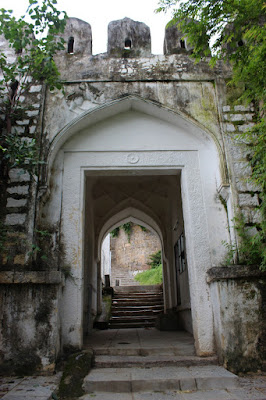 Here's the gateway, in the arch you can see two projections at the top. They are door shaft holders. Once upon a time a solid pair of wooden doors secured this entrance. 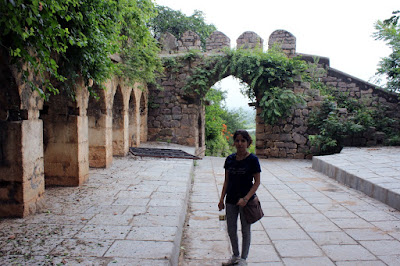 The gateway as seen from outside. Love the finishing of the wall and the shape of the arch is so smooth. The path went downhill; we did not bother any further, instead we wanted to reach the summit. 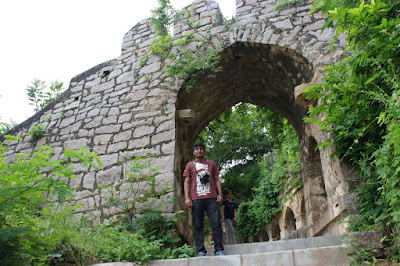 We reach another gateway looking towards the Simha Dwaram ~ Lion Entrance. 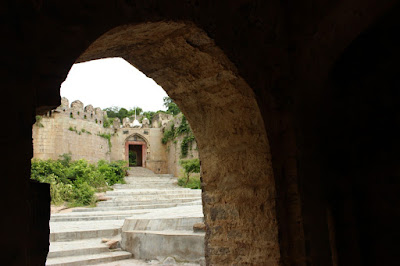 The gateway we just passed through. This structure might have been built during Muslim rule. 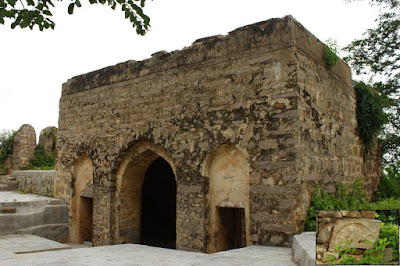 The Simha Dwaram gets its name because of a pair of snarling lions above the door (see inset). The entrance is flanked by bastions. On the left hand side bastion is the remains of an ancient cannon. The cannon is damaged and it has an inscription in Arabic or Persian script. 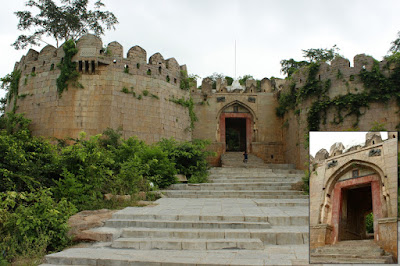 In the courtyard opposite Simha Dwaram, towards the south is a small door next to a turret. This door seems to be an escape route in times of trouble. The path leads out of the hill fort to the base of the hill. The entrance as seen from outside (see inset). As I walked in and out of this little door I remembered the fort at Nandi Hills in Karnataka. I felt Medak hill's ambiance is similar to Nandi Betta.. I say that because of the greenery and dampness on this hill. 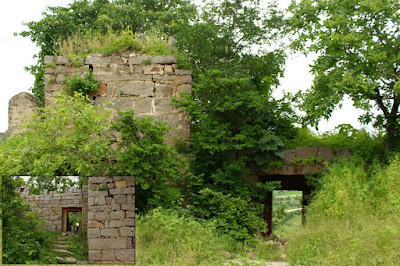 This is the view from Simha Dwaram; the courtyard, the gateway and beyond on the plains is Medak town. 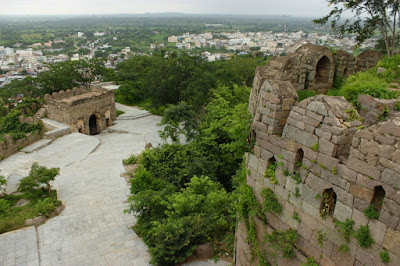 This is the turret on which the cannon rests. 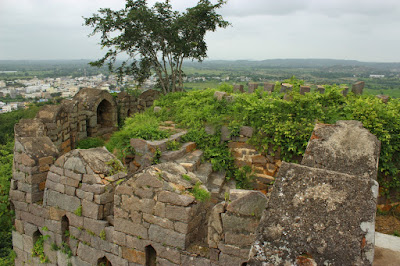 Another doorway, this one has no name in particular. As we climb higher the green cover gets denser. 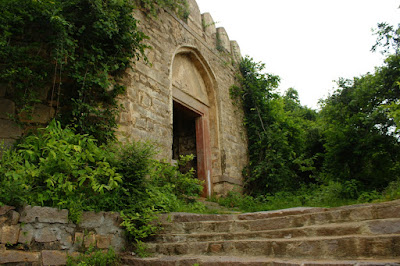 From the entrance, a curved path leads to a flight of steps.. 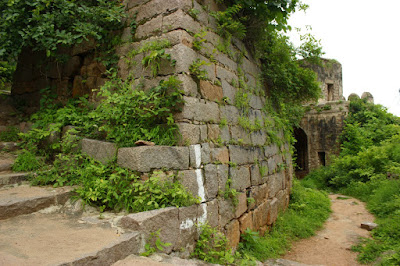 ..leading to the Gaja Dwaram ~ Elephant Door. A pair of elephant sculptures flank this door hence the name. The door is concealed by a curtain wall. One of the elephants is visible from the steps (see inset). 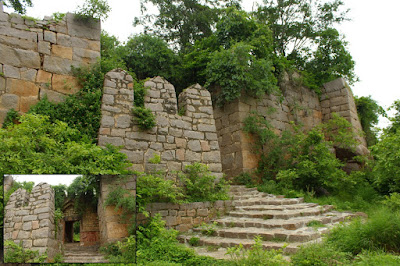 Here's the royal tusker controlled by its mahout. Its carrying an Ambari and a soldier is hanging on to its rear. 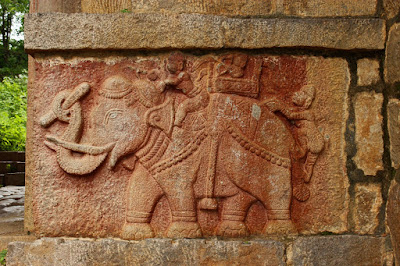 The other elephant. Surely there would be some story about these two elephants.. These two sculptures might represent a pair of royal elephants that really existed once upon a time during Kakatiyan reign. 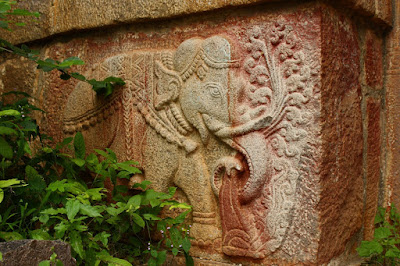 A short climb from the Gaja Dwaram is this arch and some connected structures which might have been used as barracks or stables. 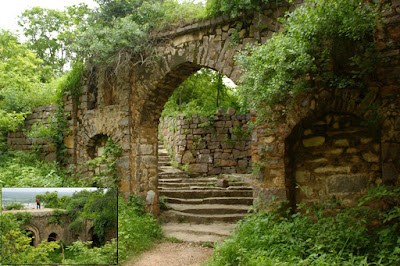 The steps are fairly comfortable and the climb is easy. Now we are close to the summit, our path passes by a water tank. This seems to be man-made to harvest rain water 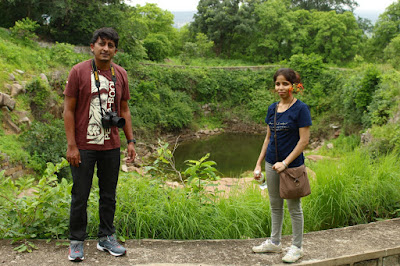 Here's the last flight of steps.. the path goes by ruins of a palace and granary.. and ends at a structure with a mosque.on the top. On the bench here you see the word police with an arrow.. its pointing towards the police outpost at the summit. 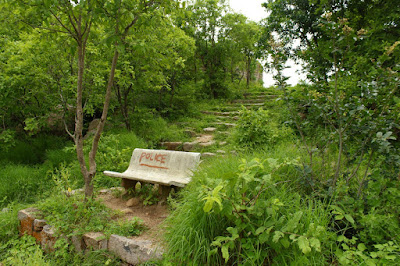 Here's the mosque with two minars. On its side is a narrow flight of steps leading to its roof.. the highest point of Medak Fort. 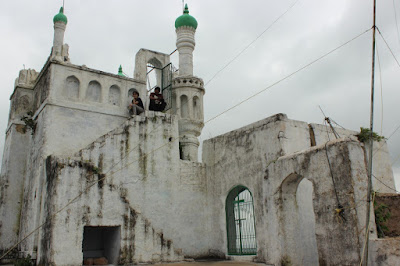 The entire town is visible from this point. Medak Cathedral stiks out from its green surroundings.  The other prominent item on the landscape if this water body known by the name Pitlam Talab. 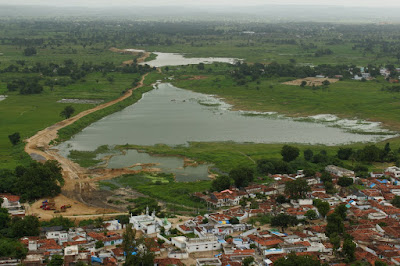 The hill has a nice ambiance, especially mornings would be good time to be on this hill. We spent some time at the summit checking out the hills' slopes. Most of the hill is covered by vegetation and at spots we could see rock formations.

Here are two pictures of the hill shot from Medak town. This is the view where the bastions, rampart walls and Mubarak Mahal are seen. Mubarak Mahal is a palace of Qutb Shahi times. Today its a heritage hotel maintained by the government of Telangana. 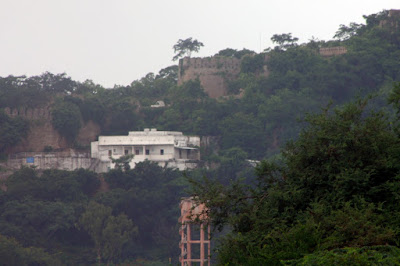 And this is mosque at the summit standing on a rock formation. 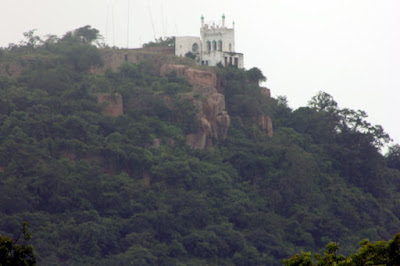 Siddeshwar, I admire your dedication to exploration and sharing it consistently. Over years, drawings and coordinates started getting shared and once in a while one can see you get some grey hair too!

Your pictures are really good, and are more "exploratory" and suspense type, with variation of panorama/scenic to tiny details. You bring such nice experience with your photos and just enough text, I wonder if any of your readers ever visit these sites. We all desire to of course!

Specifically, this post had again very good pictures that I could not hold back:
- From the entrance, a curved path leads to a flight of steps..
- Short climb from the Gaja Dwaram is this arch and some connected structures which might have been used as barracks or stables.
- This is the view from Simha Dwaram; the courtyard, the gateway and beyond on the plains is Medak town.
- the elephants

Your words have touched my heart. Thank you, Sir.

Really interesting your blog to light upon more Uttara Karntaka & Telangana region. Being a native Bidar, never heard the beauty of these places. Very interesting & informative your blog. Please keep it up, hats off to you.