August 13, 2017
Anyone visiting Hampi can't miss elephant stables, one of the best preserved monuments. These building is adjoining the Zenana Enclosure. This long building has 10 domes and a central tower. Probably the central tower was also capped by a dome however it's bare now. Technically this is a 3 storey building. 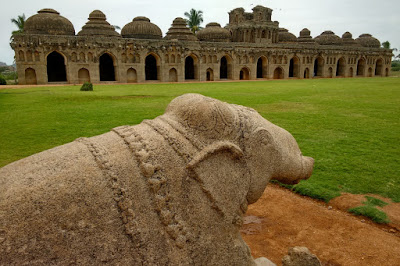 In plan, the building is  approximately 272' long and 35' wide. In elevation, the overall height is approximately 50 feet. There are eleven stables, each stable has an arched doorway. The eleven arches are complimented by niches. 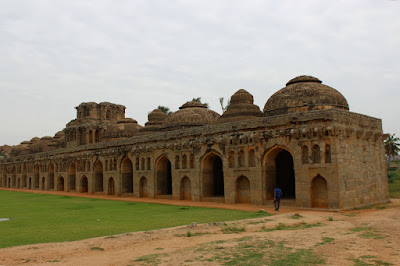 The building architecture is Indo Saracenic. There are two types of domes- ribbed and stepped. 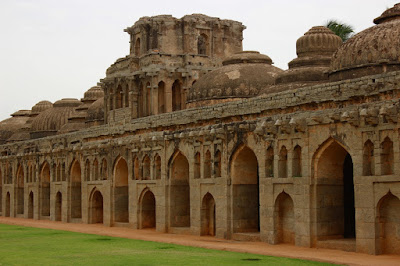 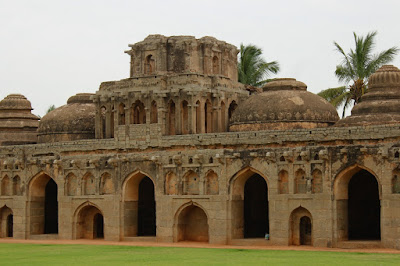 A closer look at the central hall. Its like a building on a building. Had the dome survived the test of time, the building would have been in its original look. 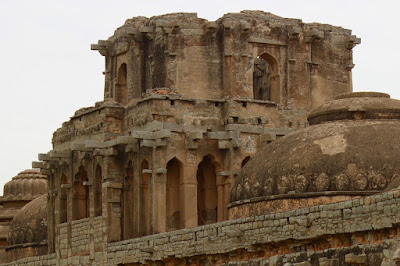 View of the central tower from the ground below. Wondering why those projecting beams. 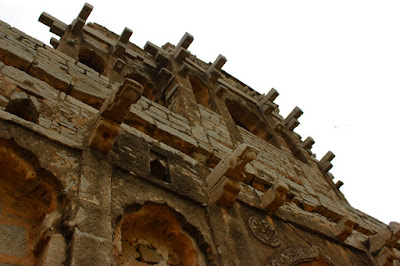 One of the arches. The outer wall is approximately 7 feet thick. That's required of an elephant stable ..to withstand the beasts forces. 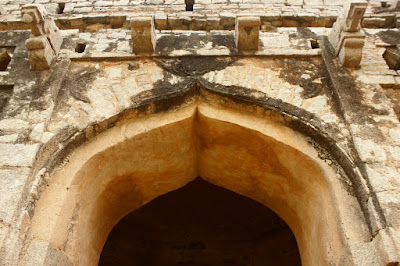 This is an example of an inner dome. The royal standards applied to stable as well. After all, oxen, horses and elephants were treated like family members in Hindu culture. Wondering if an elephant ever knew the difference between a plain and a design filled domes. So, pet pampering has an history. 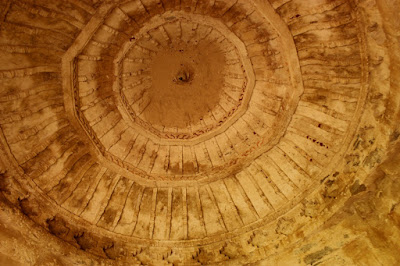 Stable interior. If I remember correctly, two stables have man sized doorways on the rear wall. 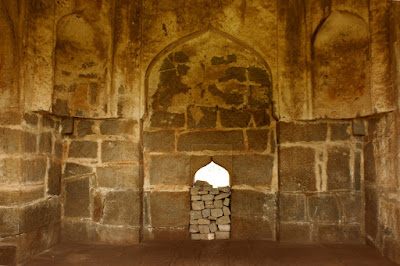 The stables are connected by man-sized passages 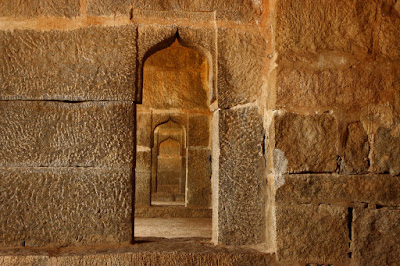 The dim interior keeps the heat away. That's Nilesh, our friend from Pune. 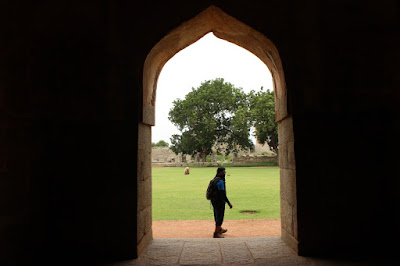 Close to the Zenana enclosure and Archaeology office are these two pillars ..7' to 8' high. These might have been used to tie elephants. There could be other purposes too. 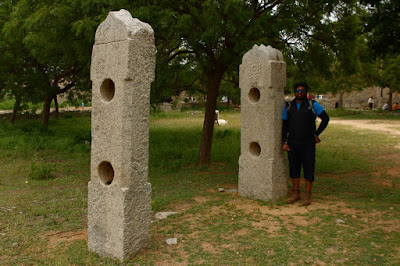 Right besides the elephant stables is another long building- the Guards' Quarters.
.........

It is beautiful it shows its grand past. Why Zenana is close to stable? Another observation though domes look native (design wise) but door arches are not native. In that Samrajya Krishnadevaraya was supreme. All five sultans were taking permission from him. It is very grand.

nicely presented! From the typical overview shots, there are these several corners and angles you make one notice. So brief yet enough to intrigue the viewer. You have made me curious of the projecting members and also the holes. Will study them when I visit, hopefully next year. Thanks for continuing to share not just photos but your observations!

Raj - the elephant stable and Zenana are side by side so that transportation is available all times. Treasury was also located inside the Zenana complex. Treasury, security and transportation were situated at one location for convenience. These are my thoughts. Talking about building design, Indo Saracenic is a mix of Hindu and Islamic designs which seemed to be protocol for secular structures.