The top most city on the Karnataka map, Bidar is just kilometers from Andhra and Maharashtra borders. Bidar is known for its hot climate and the fort. I saw the fort, for the very first time, in the Kannada movie ‘Bara’ meaning drought. Anant Nag played the lead role. The movie is centered on communal riots and a good part of the movie is shot within the fort. This was some time during my school days.

October 1995. Gulli and planned to tour Karnataka on my Splendor and Bidar was one of the important destinations.

February 1996. We rode from Bangalore through Hospet, Bijapur, Solapur and reached Bidar. Back then the city was just growing out of its original boundaries. We could see new layouts with new constructions. Somehow I have an attachment for that city. 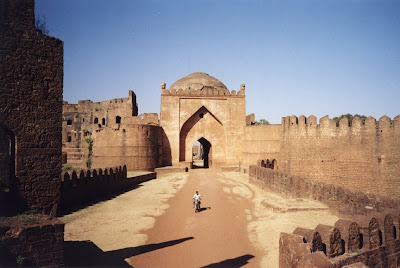 The fort is located on the edge of a plateau and nearly half its perimeter is flanked by a moat, of course it’s dry now. 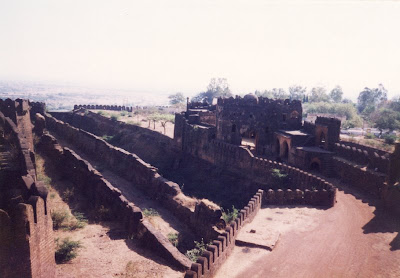 The moat is literally carved out of a bed of rock. The fort entrance is unique with a very complex security system. There are two gateways in series. The second gateway is designed to confuse anyone new to it and it’s very easy to get lost in the maze of doorways and corridors. 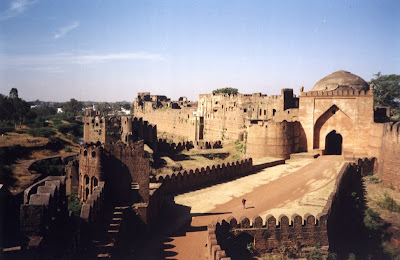 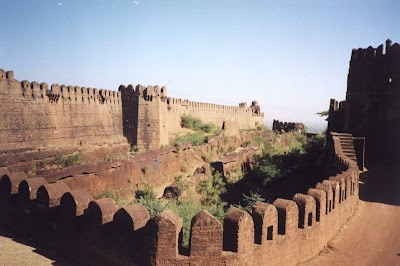 Past the gateways, we the inside opens up. Kings quarters on the left, a mosque straight ahead and prisoner gallows on the right. Also there’s a government office housed in one of the buildings. As we parked our bike and looking around where to start from, a senior government official arrived and the doors to Rangeen Mahal were opened for him. We asked if we could take a look and to our luck we got permission. The decorations in the walls were colorful and intricate set with shiny pearl like shells. 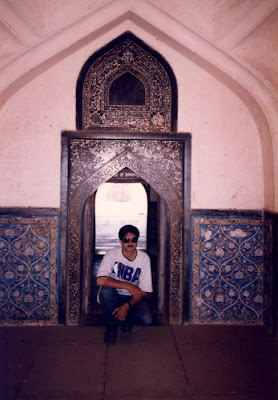 Next, we went into the mosque complex. We met the watchman who was washing clothes in one of the ancient floral design fountains. The watchman pointed out the important things to look for. 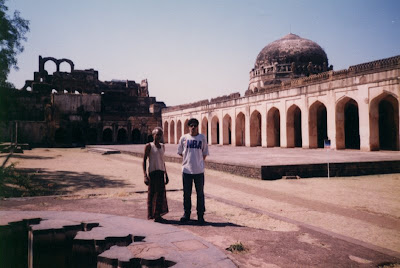 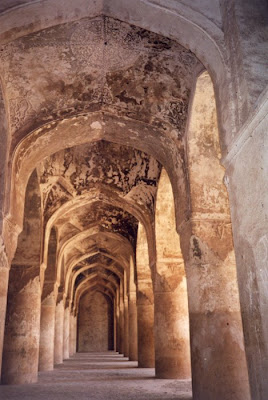 We looked around and tried to imagine how it was back then during it’s time... Gulli was trying to act like a king. There was also a small museum within the mosque complex with just few stone carvings and canons.

Just outside the mosque complex gate, there’s an ancient well and just next to it a big bowl carved out of stone. 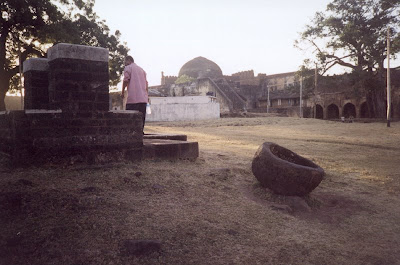 We moved towards the gallows and dungeons. These thick walled structures have a serious look. These are designed to hold prisoners; tight entrances and small ventilation holes on the roofs. We peeped down into one of the gallows; the floor was at least ten feet down. Now these gallows are in ruins and the floor was strewn with cannons of various sizes.

The fort is not maintained, lots of thorny bushes. We noticed steps leading down… underground. We went exploring little bit but we lost courage as it got a bit too wild for comfort. Probably we were very close to a tunnel entrance. The construction definitely indicates that this fort was highly sophisticated for its time with innumerable places for soldiers to hide.

We came back to our bike, took it and rode deeper exploring… We saw ruins of a half constructed palace. We could see marking lines on column which indicated the place was still under construction. 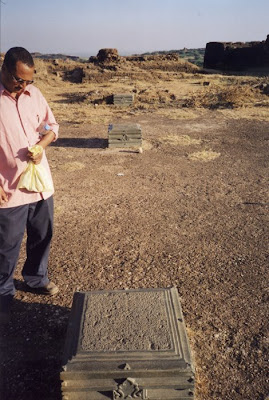 From here we could see a hamlet. It’s within the fort. The people here are into farming, growing mainly vegetables. We went down there and met few kids who let Gulli draw water from a well which we used to wash our faces. 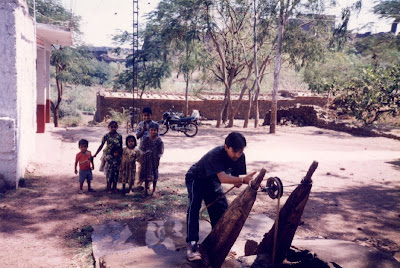 Cool and refreshed we sat in the shade of a temple chatting away with the kids. Nice peaceful little place it was.

Most parts of the fort is deserted and it’s safe to venture out alone but local people loiter in the gateway complex, mostly students, of course only men, bunking school or who cannot find enough privacy and sleep at home. Also, there are some serious students who come here to study. The place I littered with plastic and all kinds of waste… it’s very sad to this monument in this condition.

As we explored more, Gulli and I discovered something amazing; a massive cannon! We were awe-struck by the size. 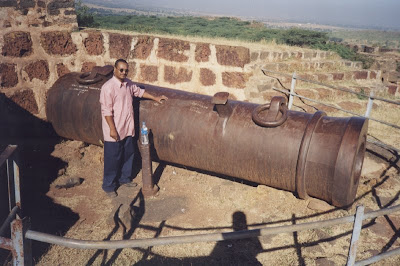 It’s difficult to imagine how it would be to fire a shot… the sound and vibrations and the lightning! I estimated the dimensions and the weights- 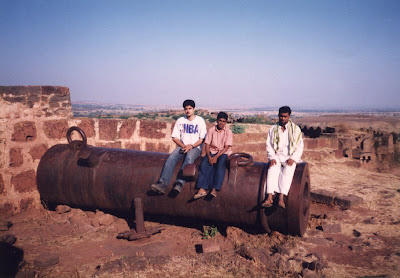 It seems there are five such cannons and these cannons are capable of firing the ball 4km from here. Just try to imagine the speed of a 350kg ball flying in the air and land 4 kilometers away! Just imagine the havoc it could wreck if it landed closer!!

Overall, the fort and whatever you see within it are all created by masters of those times. Everything’s engineered to perfection. I visited the fort again in 2003 with Praveen. I would love to go to Bidar again when I find the opportunity.

I liked the first picture. That's a nice angle from where you shot. Bidar fort is indeed a must to visit place.

ALL THE PERSON SHOULD DEFANETLY SEE THE BIDAR FORT MISSING A SINGLE POINT OF THE FORT I LOVED IT A LOOOOOOOOOOT BUT SOW ONLY FROM OUT POTION OF THE FORT BUT STILL I AM WAITING TO SEEN THE INTERIOR OF THE FORT TILL THE DAY I VISITED THE FORT SOO MANY TIMES BUT I AM ALWAYS MISSING SOME THING I DONT KNOW WHAT IS THAT I REQUEST ALL THE KARNATAKA PEOPLE PLEASE DONT MISS TO SEE THE BIDAR FORT.

@ AS I agree with you. If historical monuments interests you, this is one fort to be seen. It's one of the best preserved forts of Karnataka. I only pray tourists and archaeology department take good care of it.